Wheat is one of the most important food crops in the world and is the major crop of North Dakota. About half of all the cropland in the state is planted with this cereal grain.

North Dakota produces more spring wheat and durum wheat than any other state in the nation. In fact, over 50 percent of all durum and spring wheat in the United States comes from North Dakota.

Most of the wheat raised in North Dakota is seeded (planted) from April to late May. The crop must get enough moisture throughout the summer to mature properly. Wheat plants generally grow to be from 2 to 4 feet tall by harvest time. 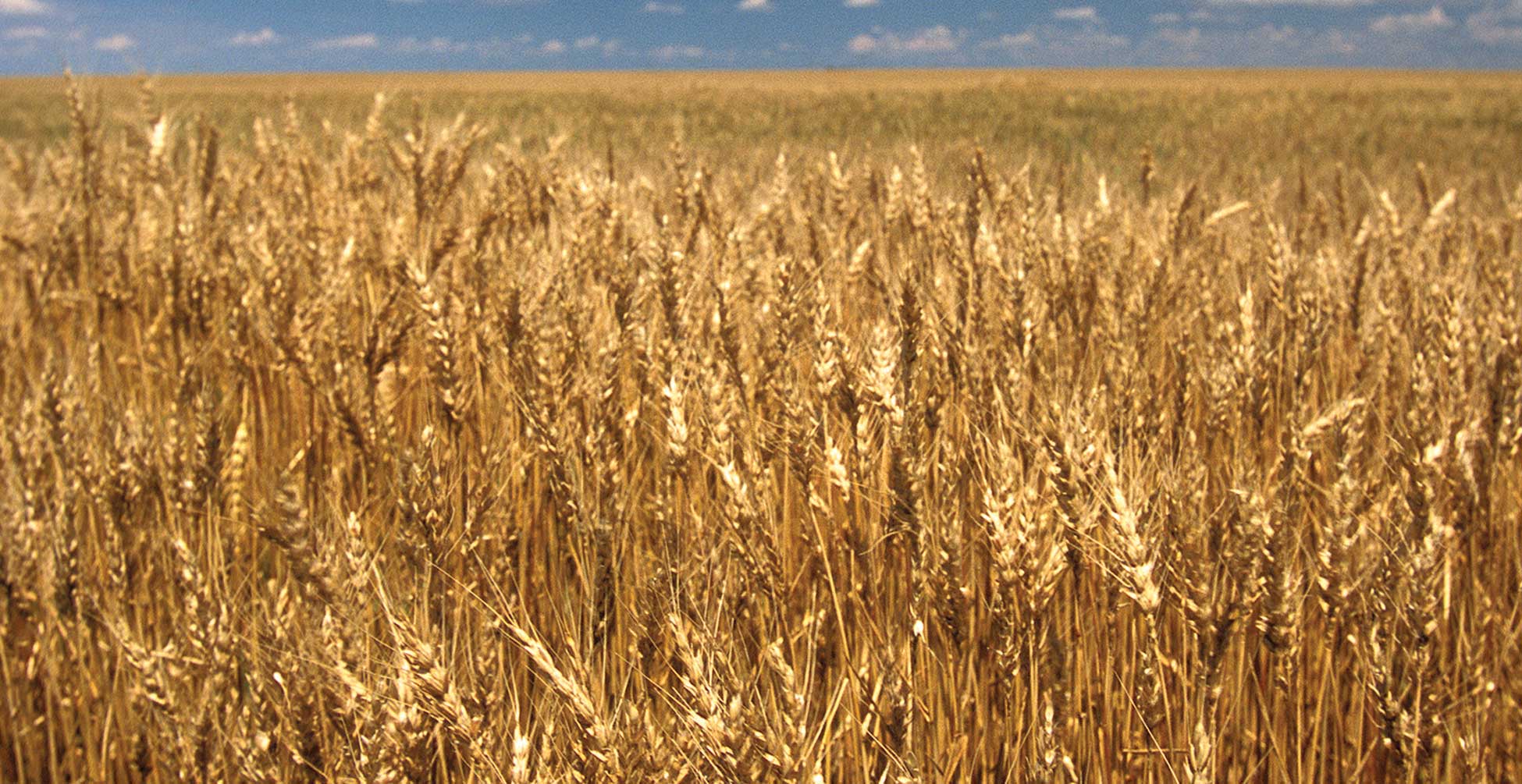 Figure 67.  Wheat is an important crop for North Dakota and the world.  North Dakota produces about half of all  hard red spring wheat grown in the United States. (USDA) 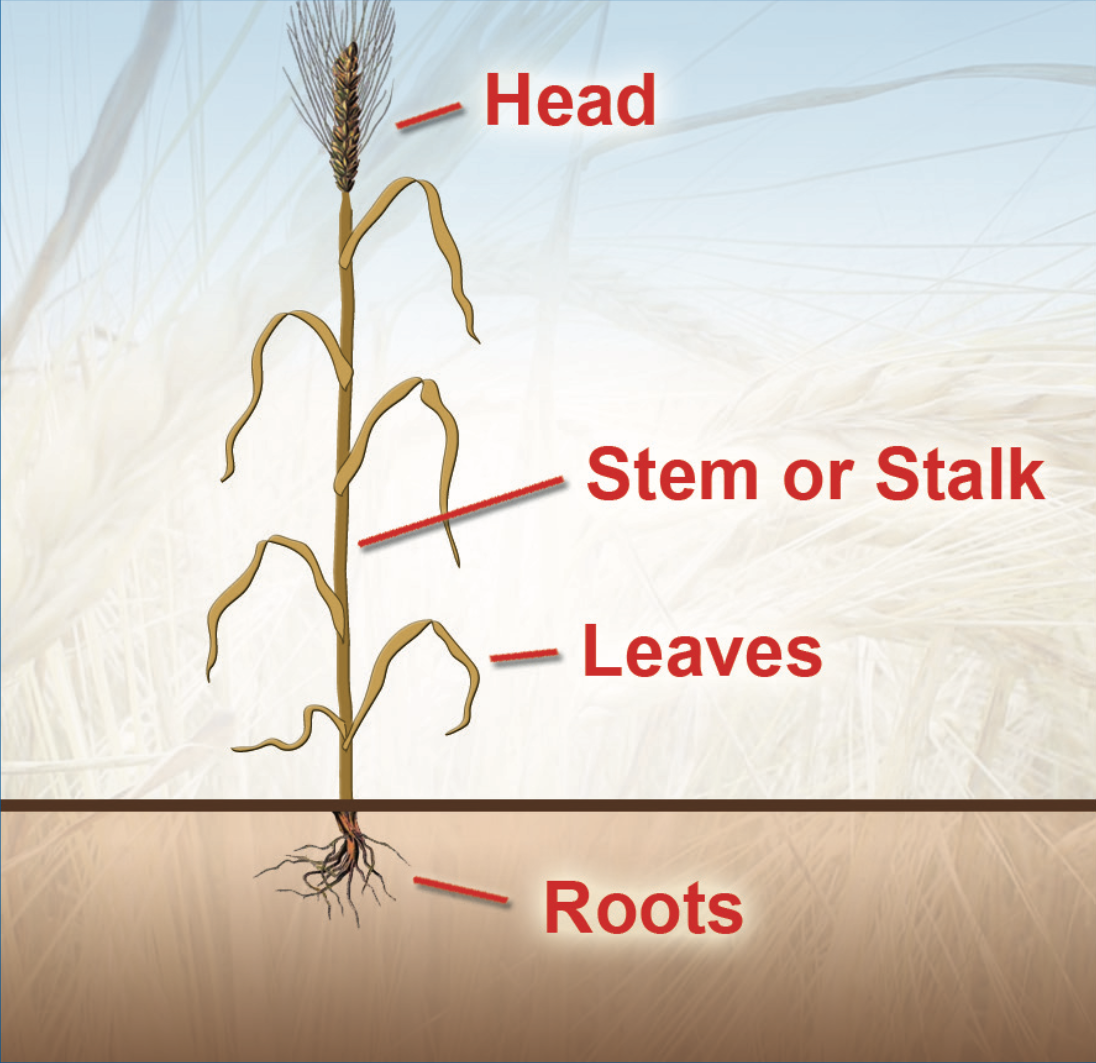 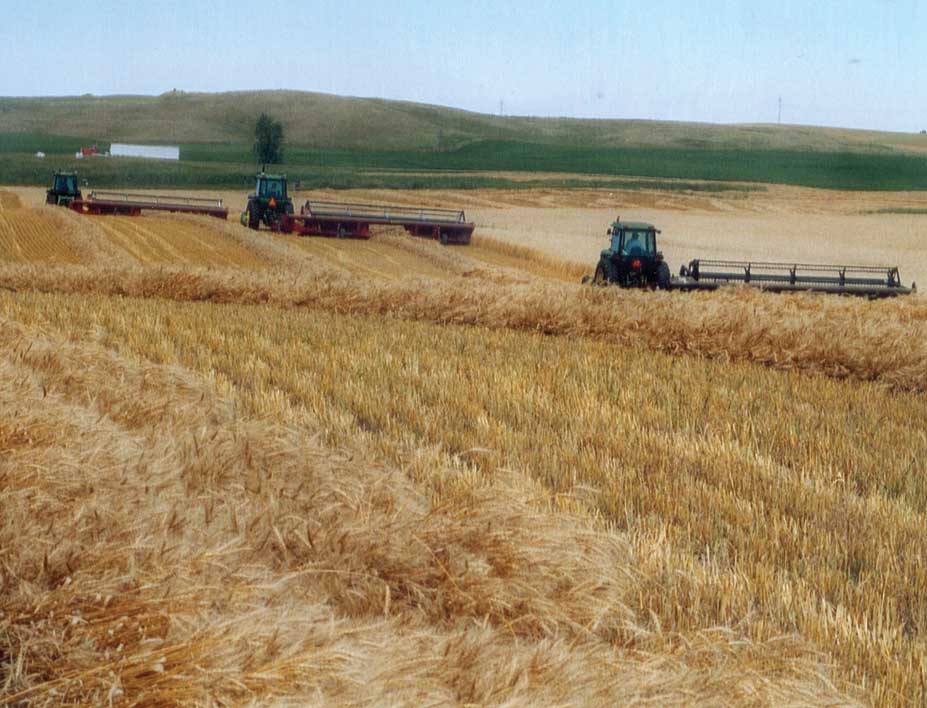 Harvest usually begins in early August and is finished by mid-September. The modern methods of harvesting differ significantly from those used in pioneer times. Today, combines, rather than threshing machines, are used to harvest small grains. In nine seconds, a combine can harvest enough wheat to make 70 loaves of bread! 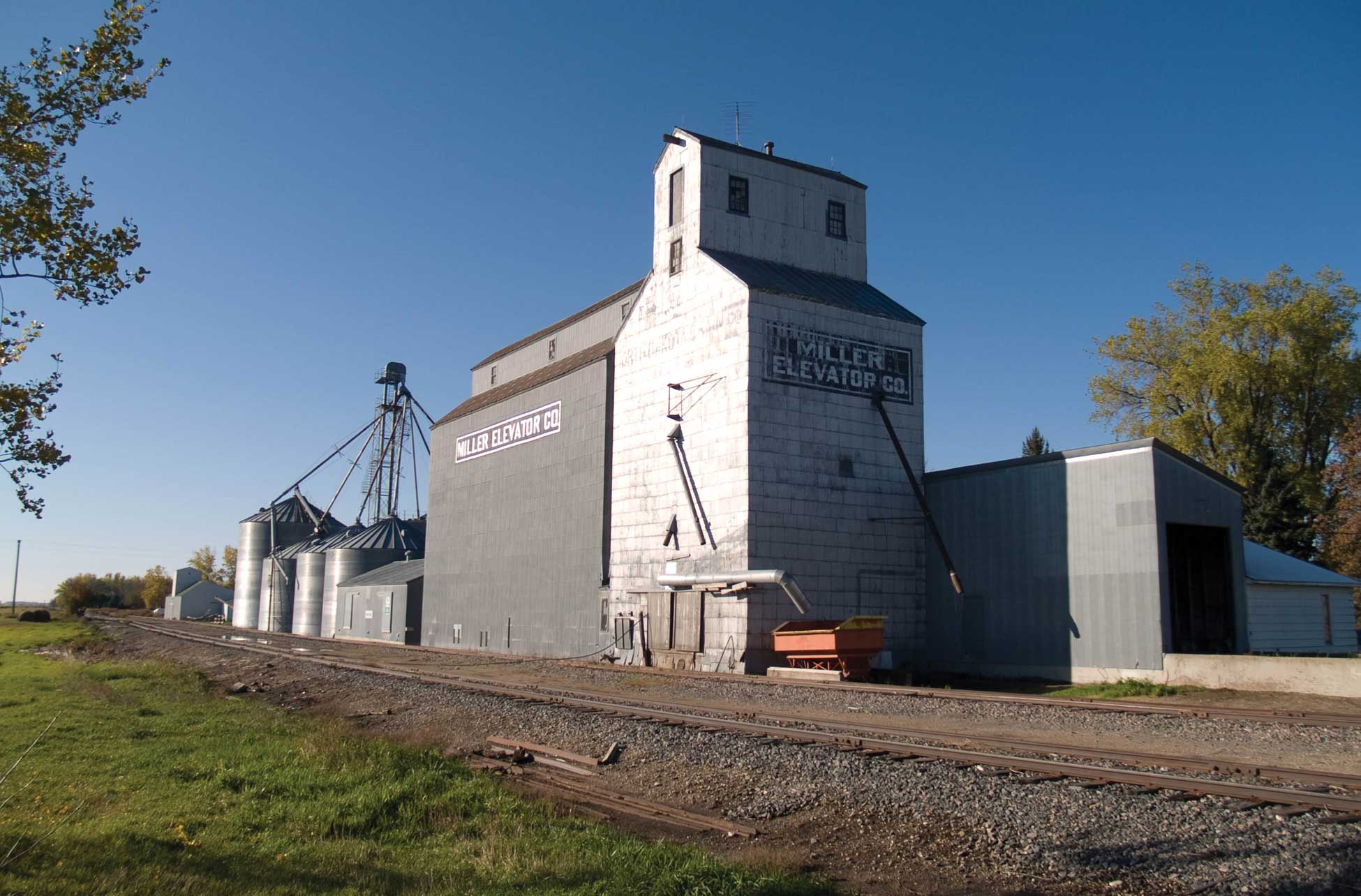 Trucks drive directly into the elevator. After a truckload of grain has been weighed on a huge scale, the grain is dumped into a pit. From there, it is elevated to a specific bin.

The largest flour mill in North Dakota is the North Dakota Mill and Elevator located in Grand Forks. This mill produces the Dakota Maid brand of flours, including all-purpose flour, whole wheat flour, and bread flour. 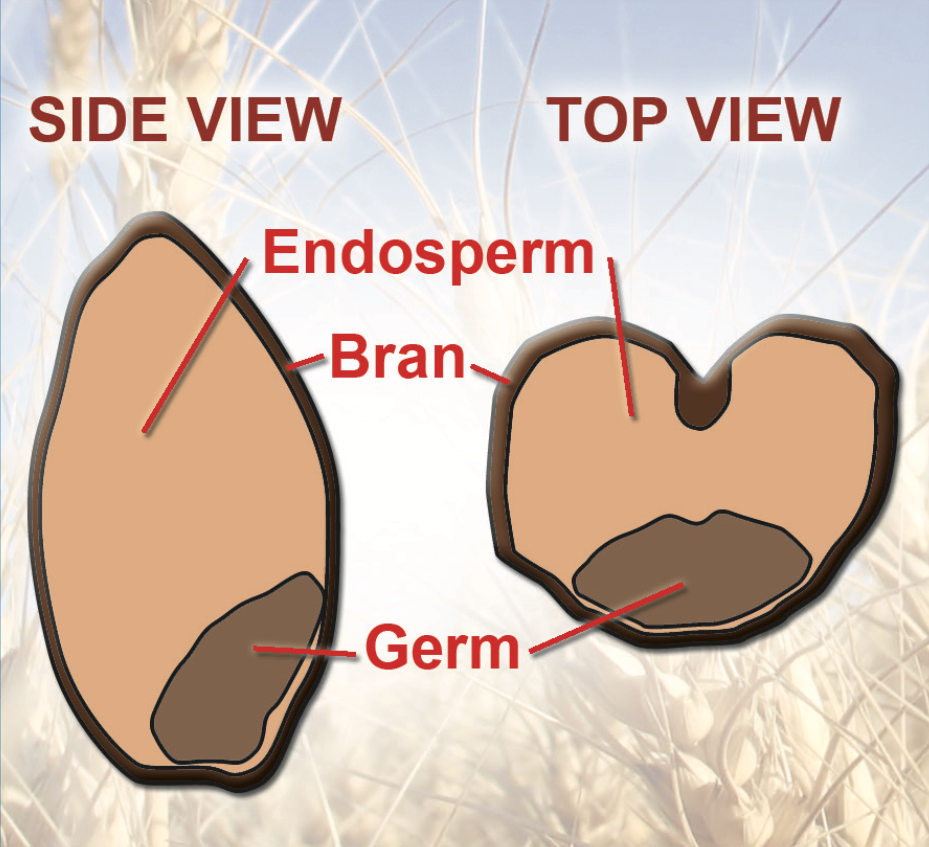 Figure 71.  Parts of a wheat kernel. The wheat kernel parts include the bran, endosperm, and germ.  (SHSND-ND Studies) 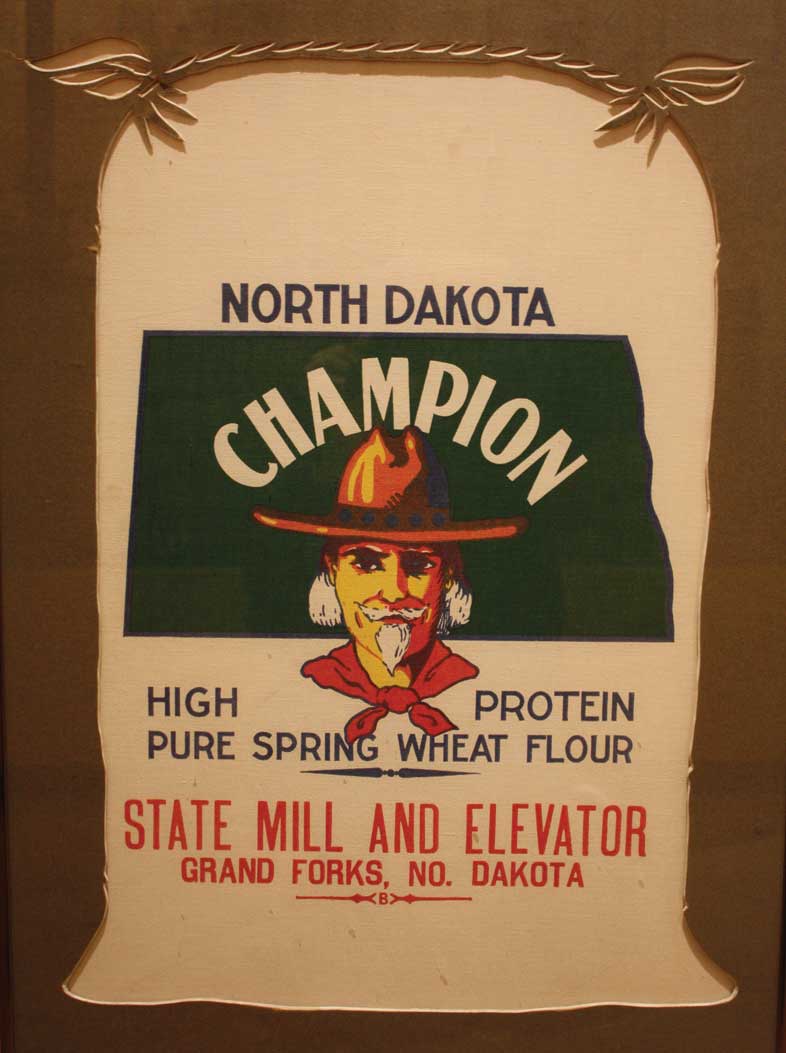 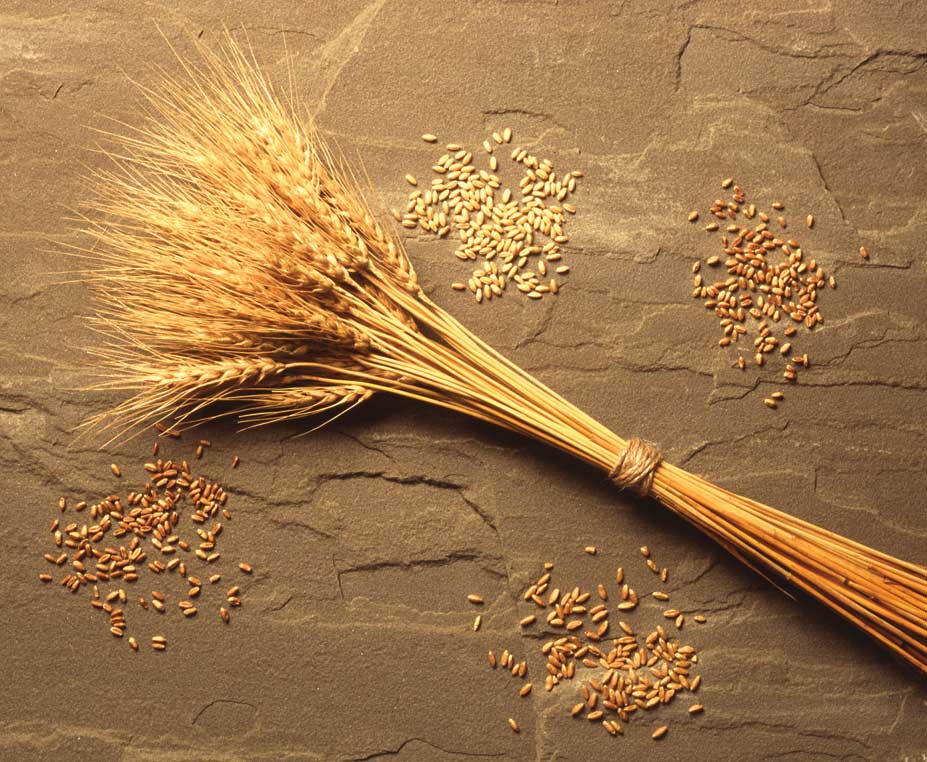 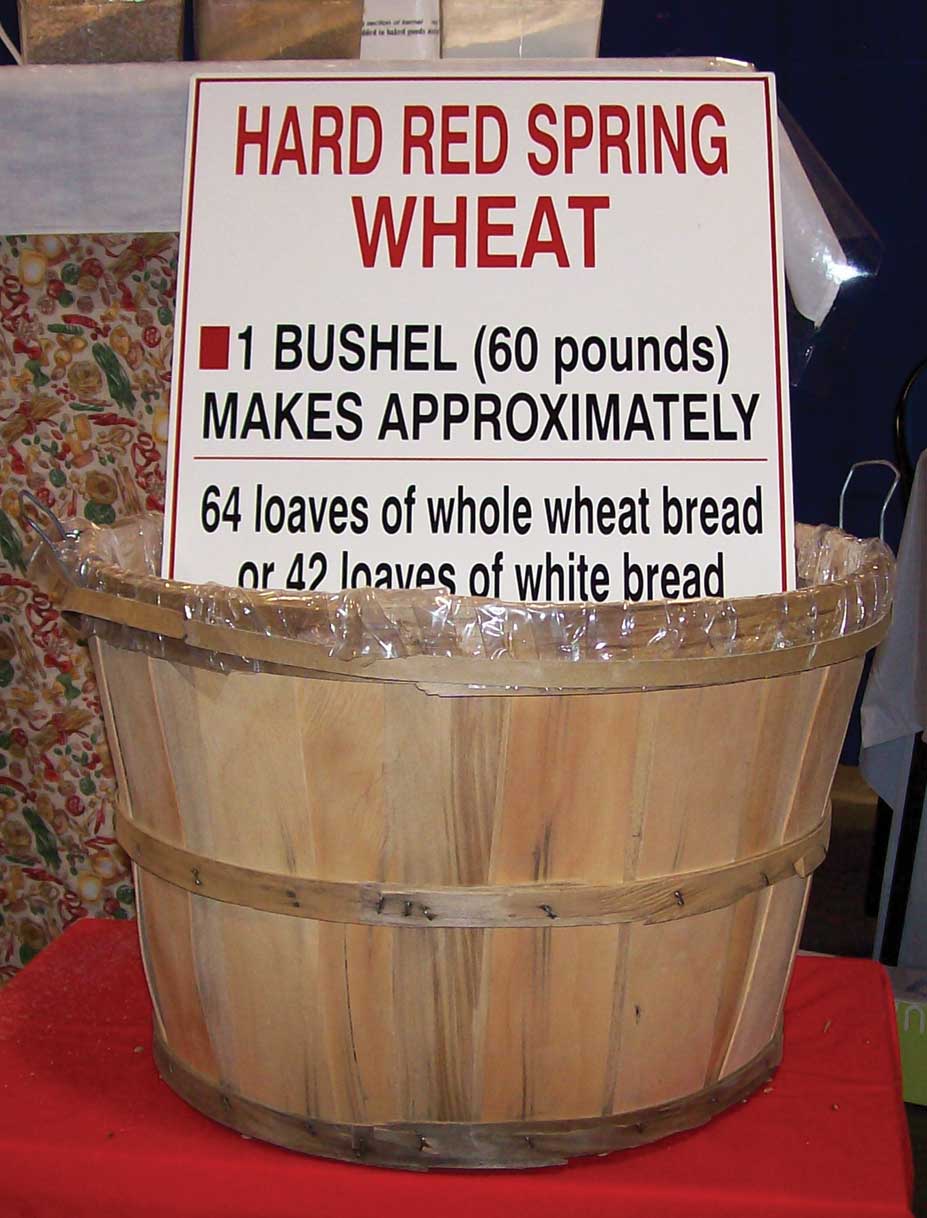 Figure 74.  Wheat is sold by the bushel. A bushel is a unit of measure that equals 128 cups; a bushel of wheat contains about one million kernels and weighs 60 pounds. (Gwyn Herman) 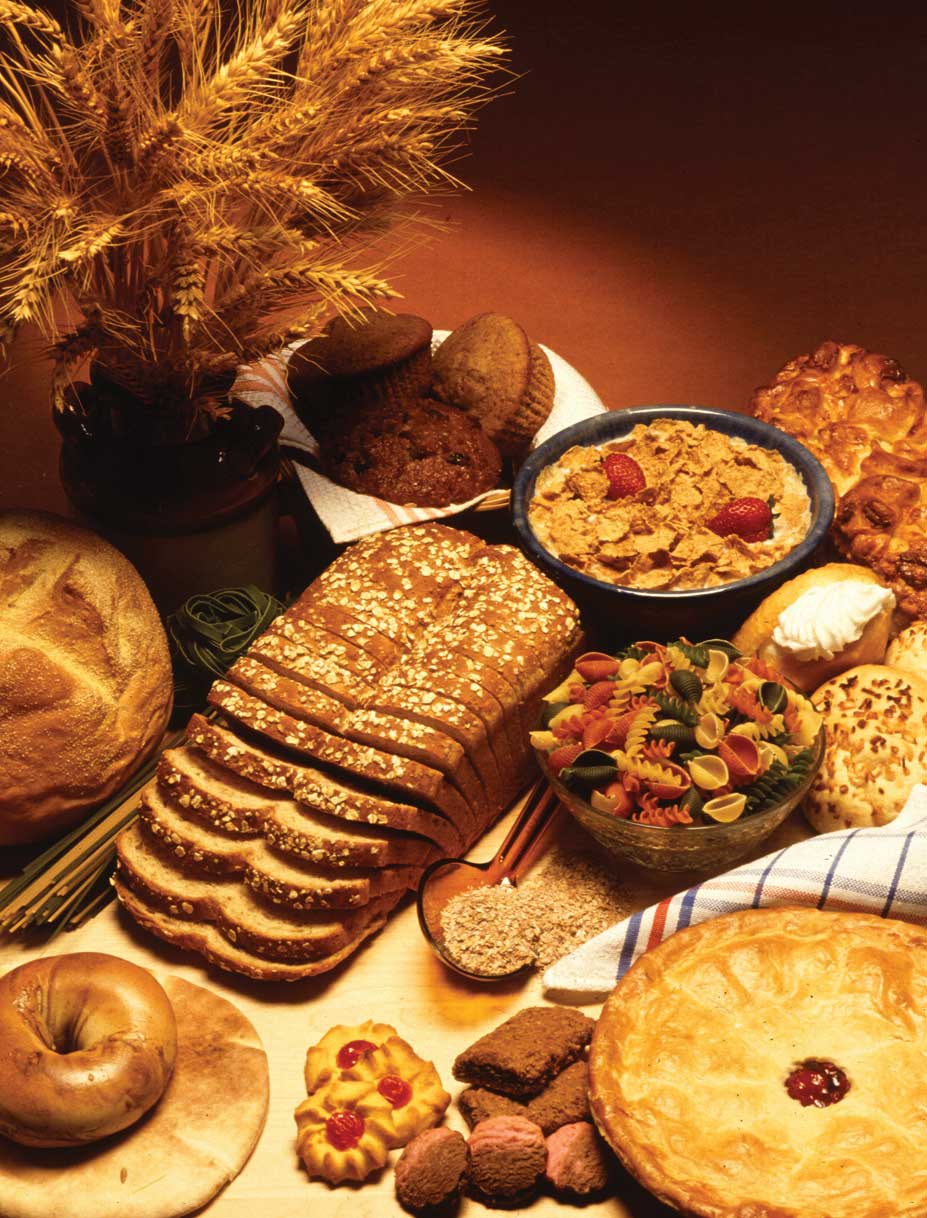 Figure 75.  Foods made with wheat are a major part of the human diet.  Food products made from wheat include bread, cake, breakfast cereal, cookies, crackers, and pasta.  (USDA)

Hundreds of varieties of wheat have been developed. Many of these varieties were developed by scientists at North Dakota State University (NDSU) in Fargo. The varieties are classified into six different types according to these three conditions: (1) how hard or soft the kernels (seeds) are;  (2) the color of the kernels; and (3) the season the crop is planted. The main wheat crops in North Dakota are hard red spring wheat and durum. 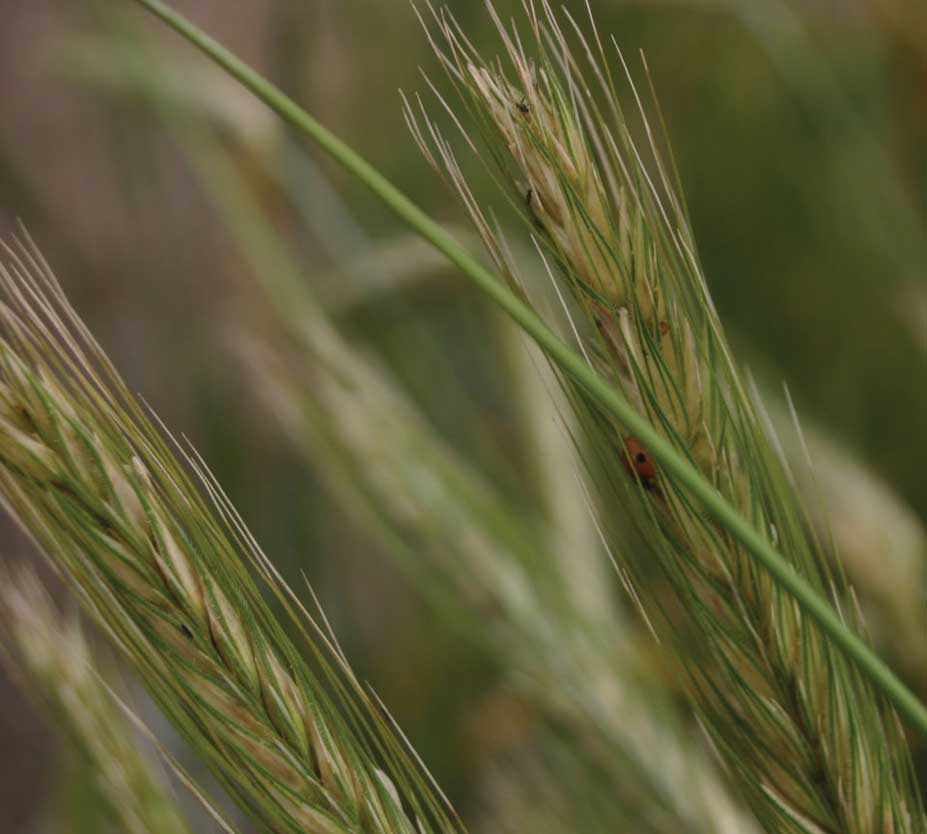 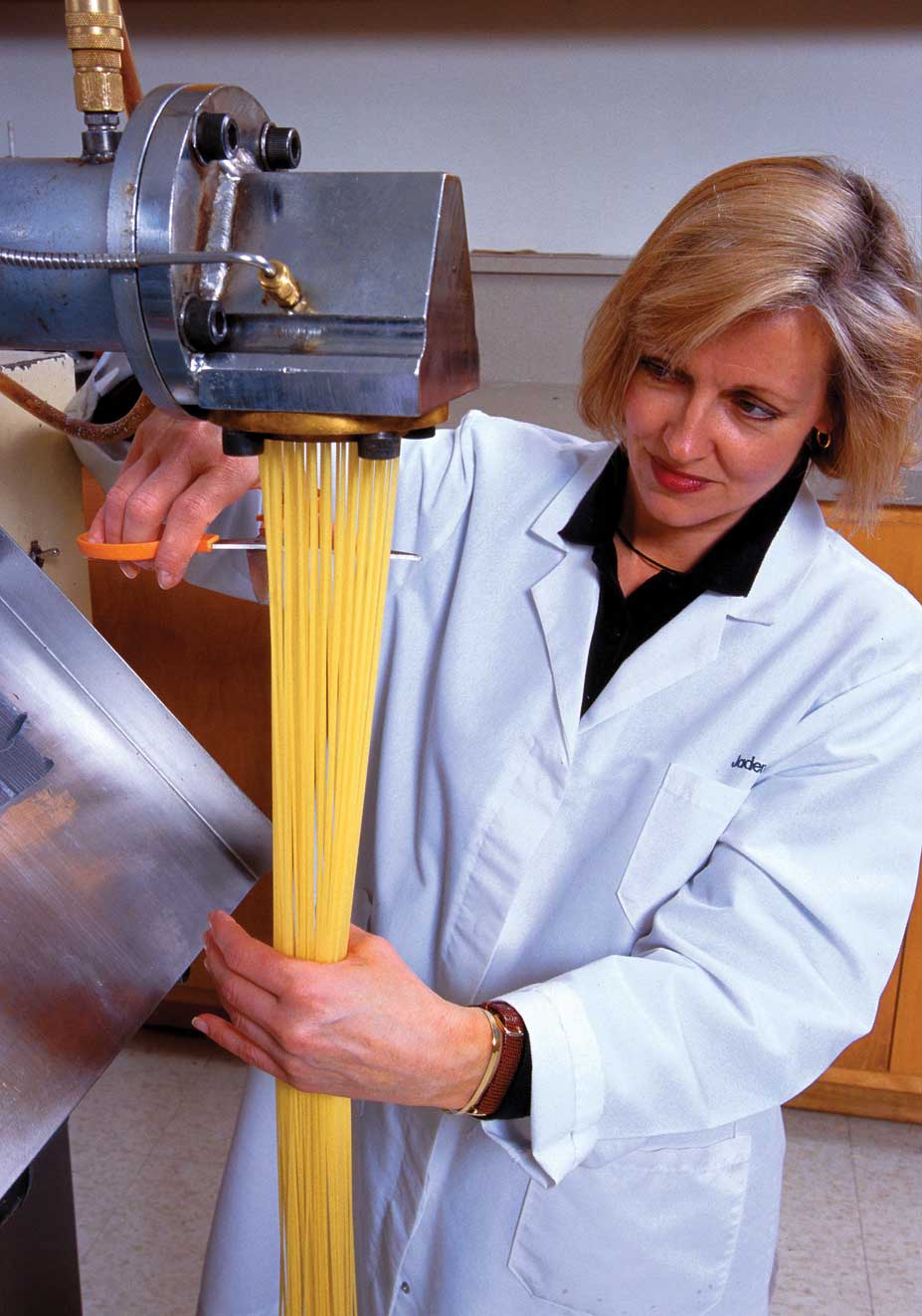 Figure 77.  Pasta is made from durum.  Americans who enjoy spaghetti, macaroni, and other pasta can thank North Dakota farmers.  (USDA) 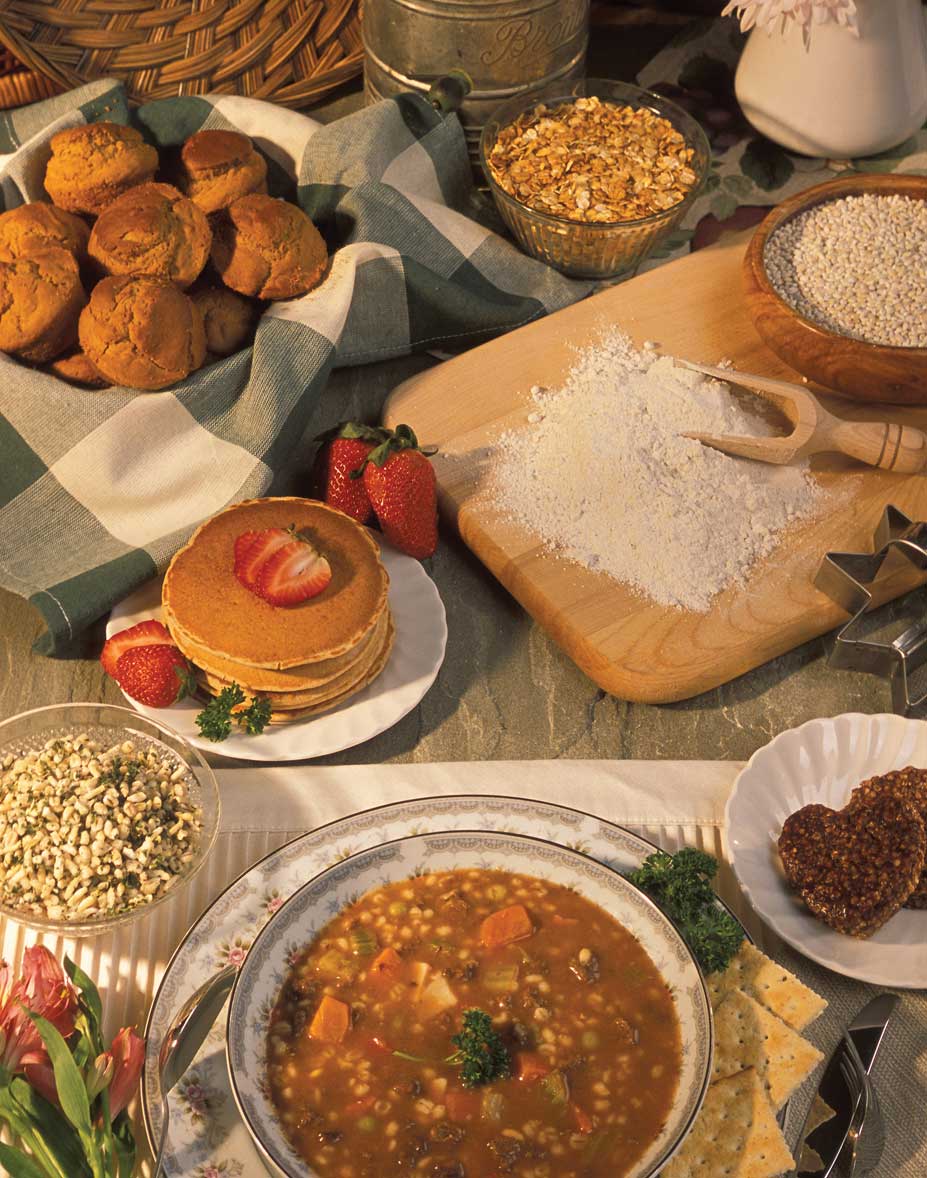 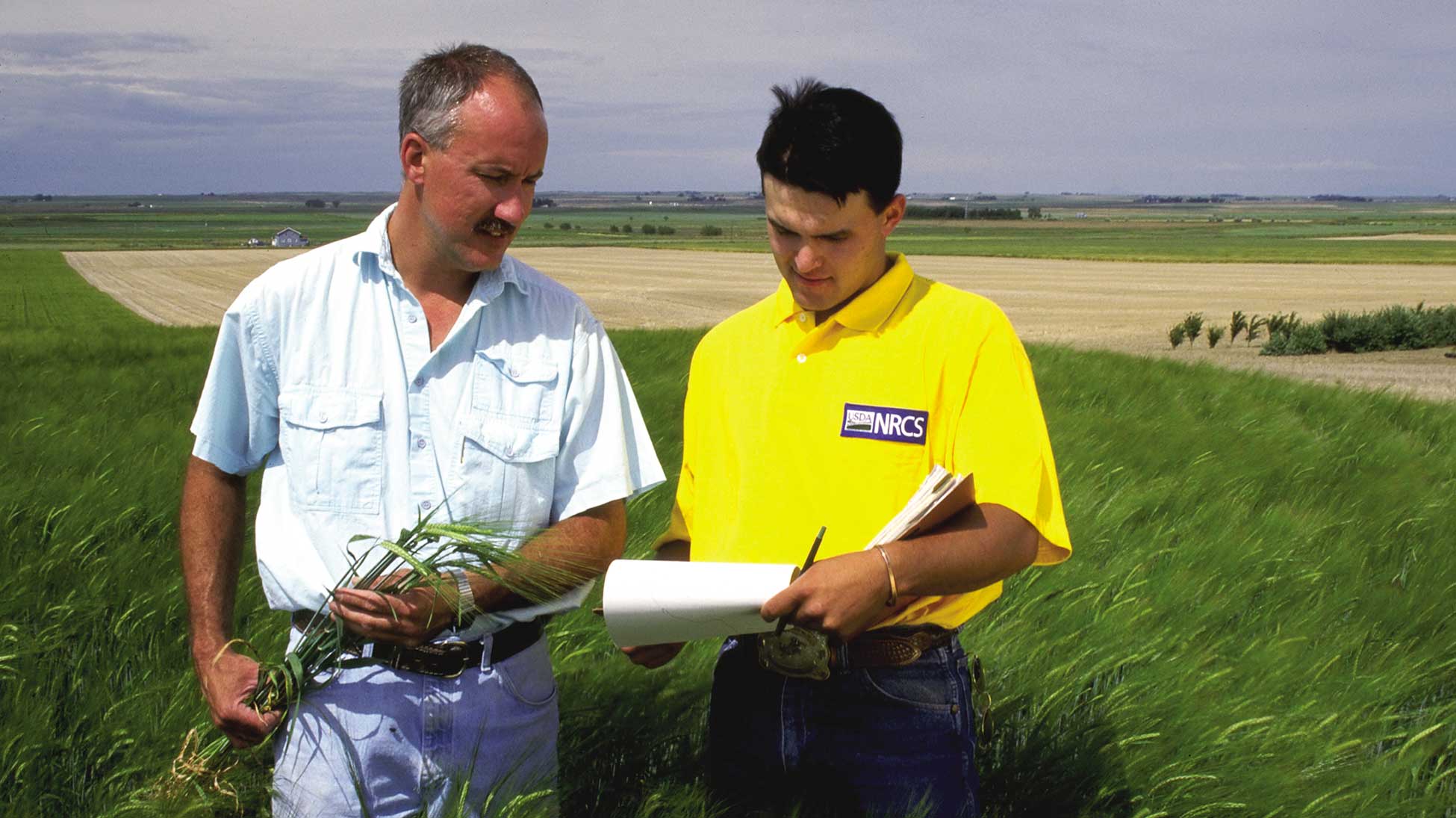 Figure 79.  Barley is used for food and livestock feed.  These researchers discuss a variety of barley near Dickinson, North Dakota.  (USDA)

Durum is the hardest of all wheats. The word “durum” comes from the Latin word dūrus, which means “hard.” The hardness of this wheat makes it the best choice for producing pasta.

When other kinds of wheat are milled (ground up), the endosperm breaks down into a fine powder. Durum, however, has an endosperm so hard that when it is milled, a grainy substance, rather than a powder, is produced. This substance is called “semolina” (sem-ah- LEE-nah). Semolina is the main raw ingredient in pasta.

The word “pasta” comes from an Italian word that means “paste.” Over 350 different types of pasta are produced throughout the world. Spaghetti and macaroni are two common forms of pasta. North Dakota farmers raise enough durum to make 14 billion (14,000,000,000) servings of spaghetti. Durum contains more protein than any other type of wheat.

North Dakota leads the nation in the production of durum. Each year, about 1.7 million acres of durum are planted in the state. North Dakota durum is sold to more than 30 countries throughout the world.

Barley is one of the oldest cultivated plants in the world. Archaeologists have found evidence indicating that this small grain dates back 18,000 years. Barley contains less protein than wheat and is not commonly used for bread-making.

Figure 82.  North Dakota ranks #1 and leads the nation in the production of the crops listed in the chart.  (SHSND-ND Studies)

Barley is divided into two classes— malting barley and feed barley. North Dakota leads the nation in the production of malting barley.

Malting barley is a higher quality barley that is used for human consumption (eating and drinking). Most malting barley is made into malted beverages such as beer. This “malt” is also used in malted milk shakes. Feed barley is used as fodderLivestock feed for cattle, sheep, swine, and poultry.

Oats is a cereal grain used mainly as fodder, especially for horses and cattle. Only about 5 percent of the oats raised is used for human consumption. The oats consumed by humans is found in oatmeal, cold cereals, and snack bars. North Dakota produces about 10 percent of the nation’s oats crop. 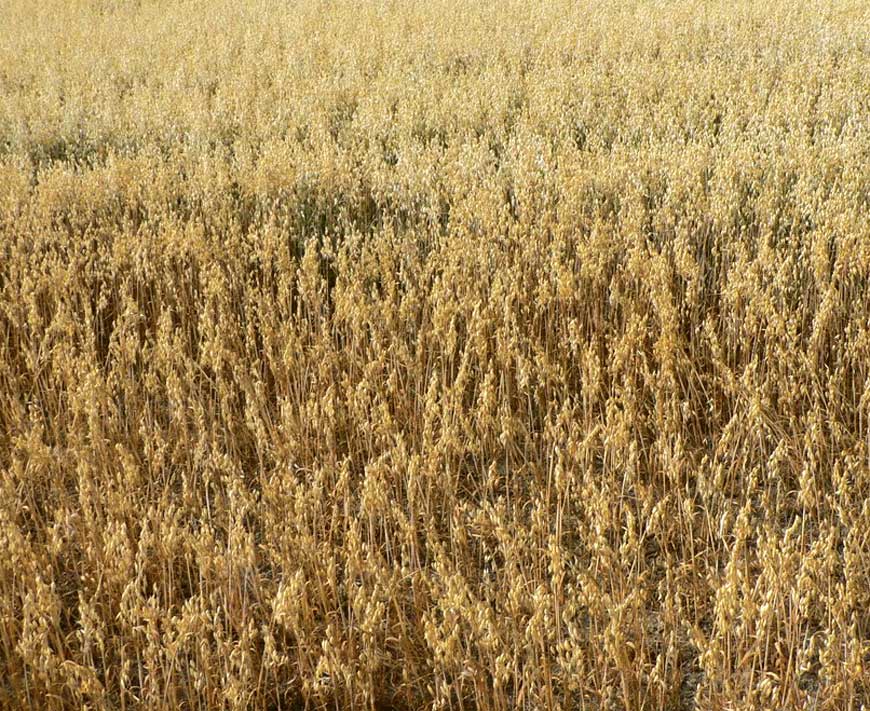 Figure 81.  Oats are used mainly for livestock fodder but are also used for consumption by humans.