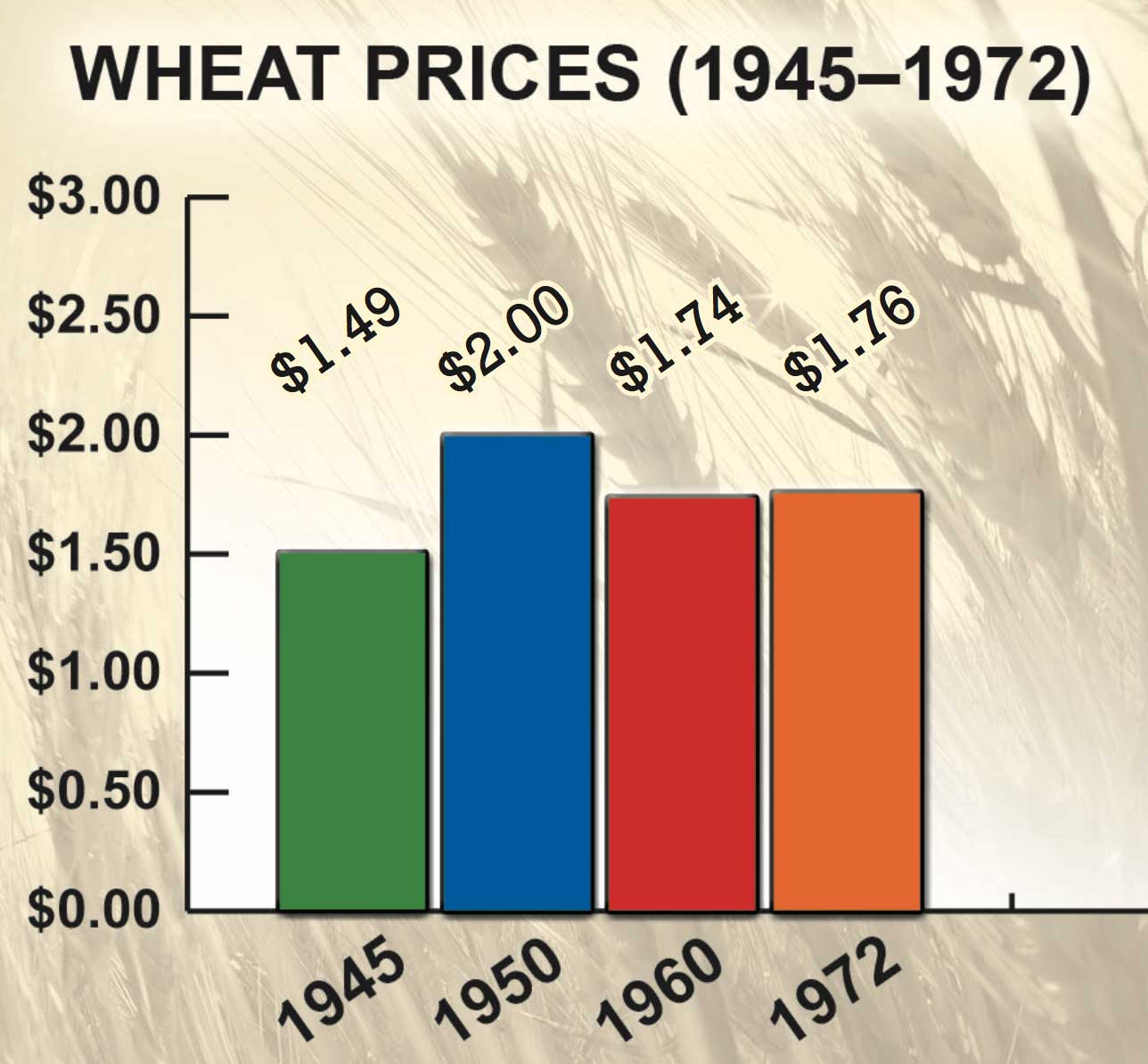 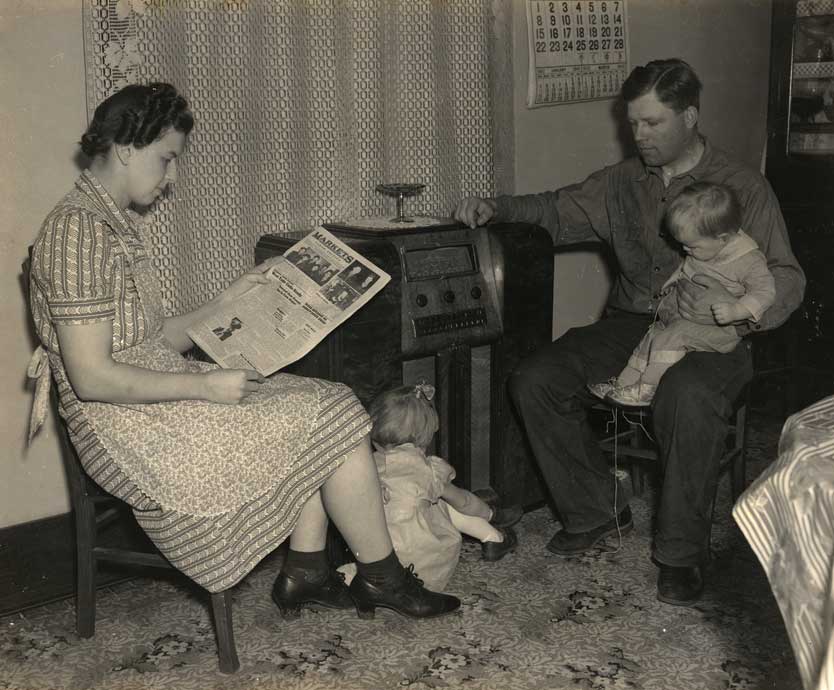 Figure 56.  This farm family enjoys listening to an electric radio after receiving electricity in the 1940s.  (Institute for Regional Studies, NDSU, 2036-52-24) 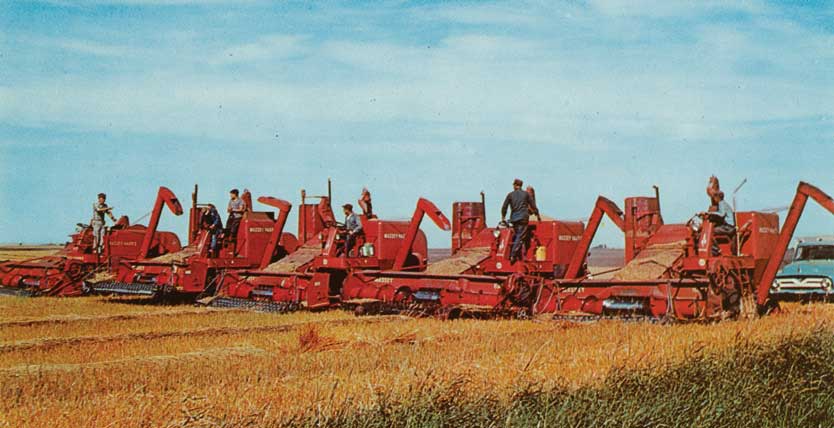 The postwar (after the war) years brought continuing changes to North Dakota. In order to make up for the loss of farm workers, farmers bought more tractors and other machinery. Since work could be done faster with machines than by hand, farmers were able to cultivate more land. Many small farms disappeared, and the remaining farms grew larger.

As the farms enlarged, it became necessary for farm families to travel farther distances. More cars and trucks were purchased. Roads were improved, and highways were built throughout the state. Small towns became smaller, while urban areas grew.

Rurallife was also changing in other ways. In 1940, most North Dakota rural areas did not have either electricity or running water. After World War II, the Rural Electrification (ee-lek-trah-fah-KAY-shun) Administration (REA) began constructing power lines across the state to carry electricity to rural areas. By 1954, 90 percent of North Dakota farms had electricity.

With the coming of electricity to rural areas, farm families were able to benefit from the same advantages that urban people had enjoyed for many years. Electric pumps could pump water through pipes from the well to the house, and outhouses (outdoor toilets) could be replaced with indoor bathrooms.

Farm families installed refrigerators and other electrical appliances, which helped make their lives easier. They also discovered a new form of entertainment. Battery-operated radios had been in use since the 1920s, but it was not until the 1950s that rural North Dakota families were able to purchase their first television sets.

Farming methods were improved, and machinery was modernized. Combines replaced threshing machines. A combine (KOM-byn) is a harvesting machine that separates the kernels of grain from the stalks (straw) as the machine is driven through a field. 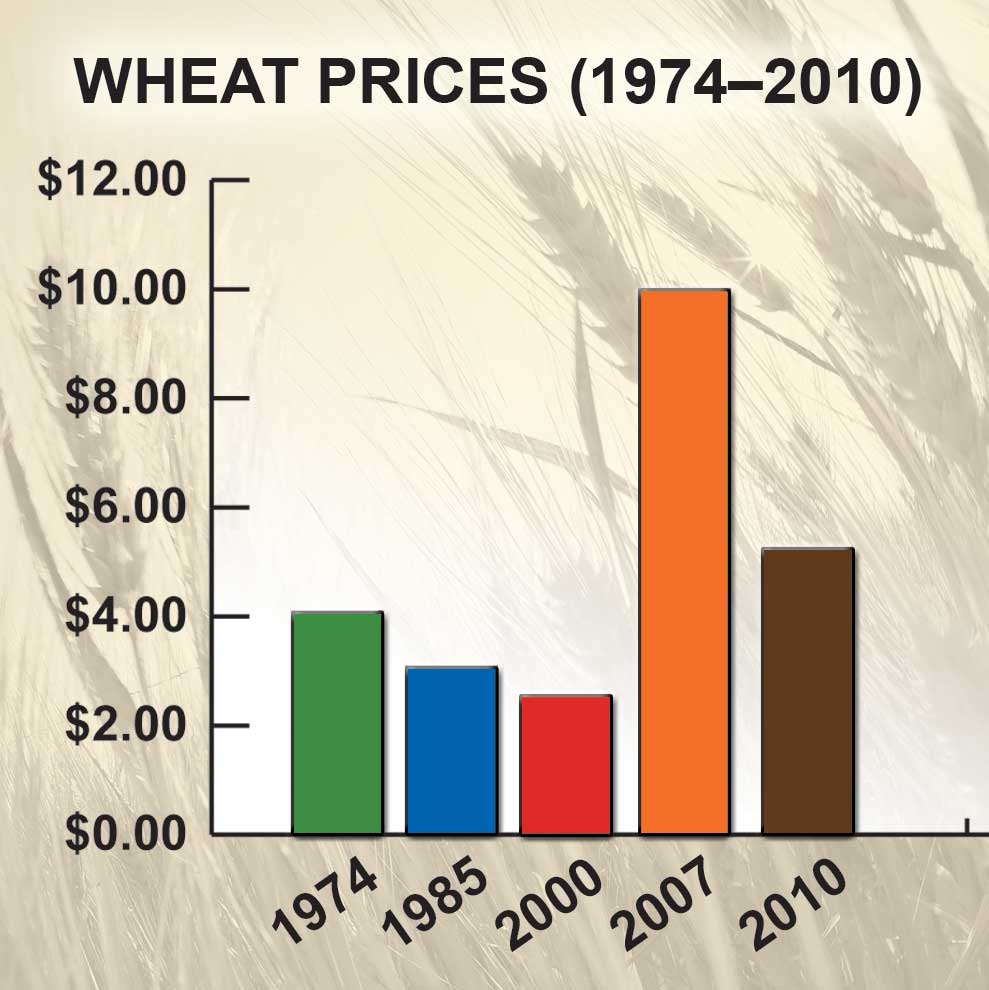 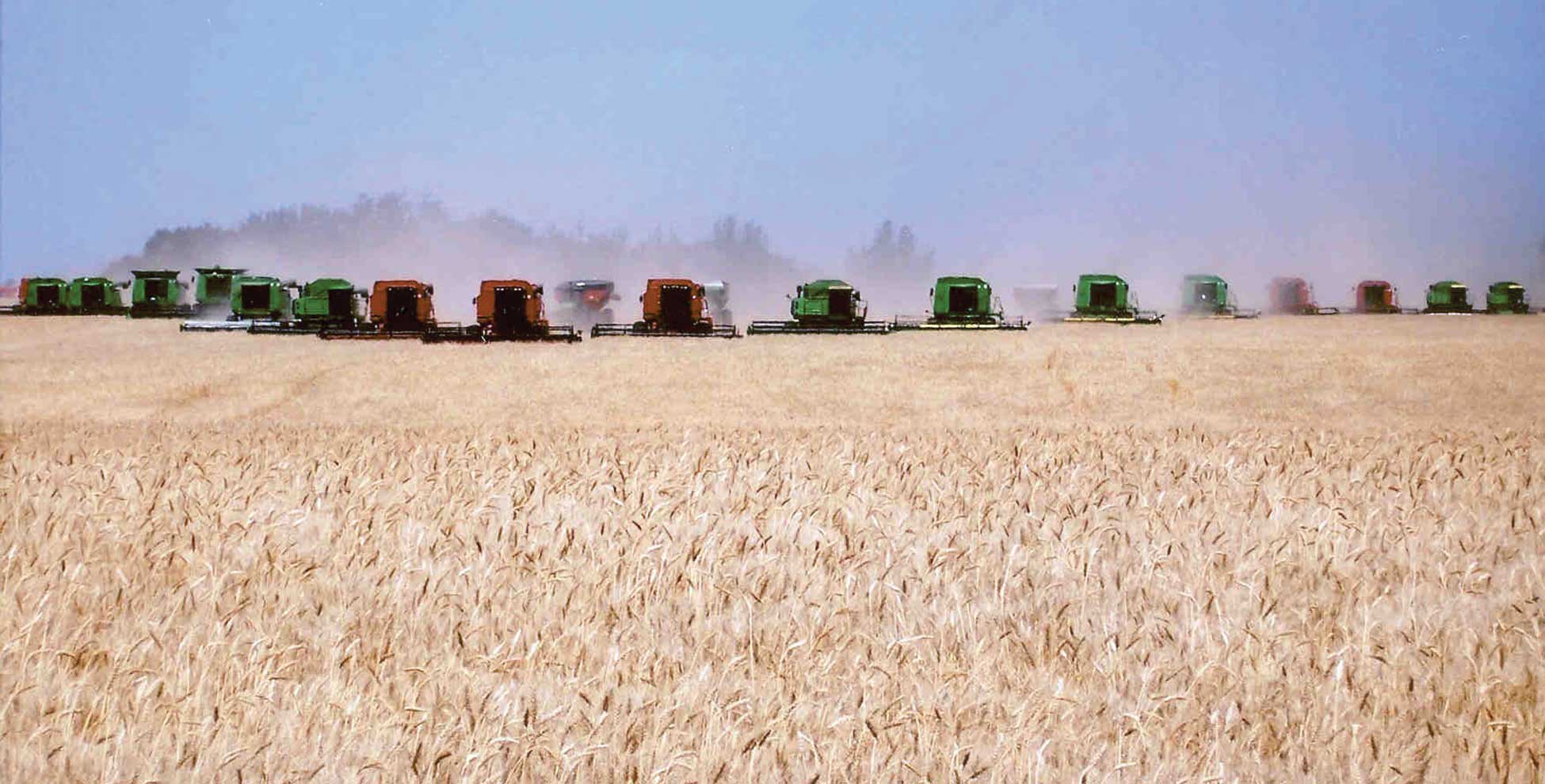 The improvement of farming methods enabled farmers to produce more and better crops. In the 1950s, farmers began using chemical fertilizers to increase their crop yields. The yield means the amount that is produced.

During the 1960s, the country experienced a surplus (more than what is needed) of wheat and other farm products. The U.S. government decided to use surplus food to expand the school lunch program so that it would include school breakfast.

Unfortunately, however, the positive situation did not last. In 1975, wheat prices began slipping. By 1977, the price had dropped to $2.33 per bushel. At the same time, farming expenses increased.

The price of land went up, and the costs of fuel, fertilizer, and farm equipment rose rapidly. Farmers had a difficult time making a profit. Between 1975 and 1985, about 8,000 North Dakota farms went out of business.

New technology was developed for agriculture in the 1980s and 1990s. Using satellite technology, farmers could plan and track farming practices. Computers were put into use, not only in farm homes, but also in tractors, combines, and other farm equipment.

North Dakota farmers know that they are engaged in a business that is constantly changing. Some features of farming can be controlled, but many cannot. Being well educated in the field of agriculture is helpful and necessary, but other factors such as weather are unpredictable.

Wheat is still “king” in North Dakota, but other crops also contribute greatly to the state’s economy today. Examples are corn, sugarbeets, soybeans, canola, and sunflowers.

Today, as in the 1970s, land prices are going up. Fuel and fertilizer costs are high. Some farmers are concerned that the problems of the late 1970s might be repeated. Others are confident that their family farms will survive.

New world markets continue to open up for agricultural goods. China, Brazil, Mexico, and India are a few of the many countries that are now trading partners with the United States. North Dakota agricultural products are in demand throughout the world. 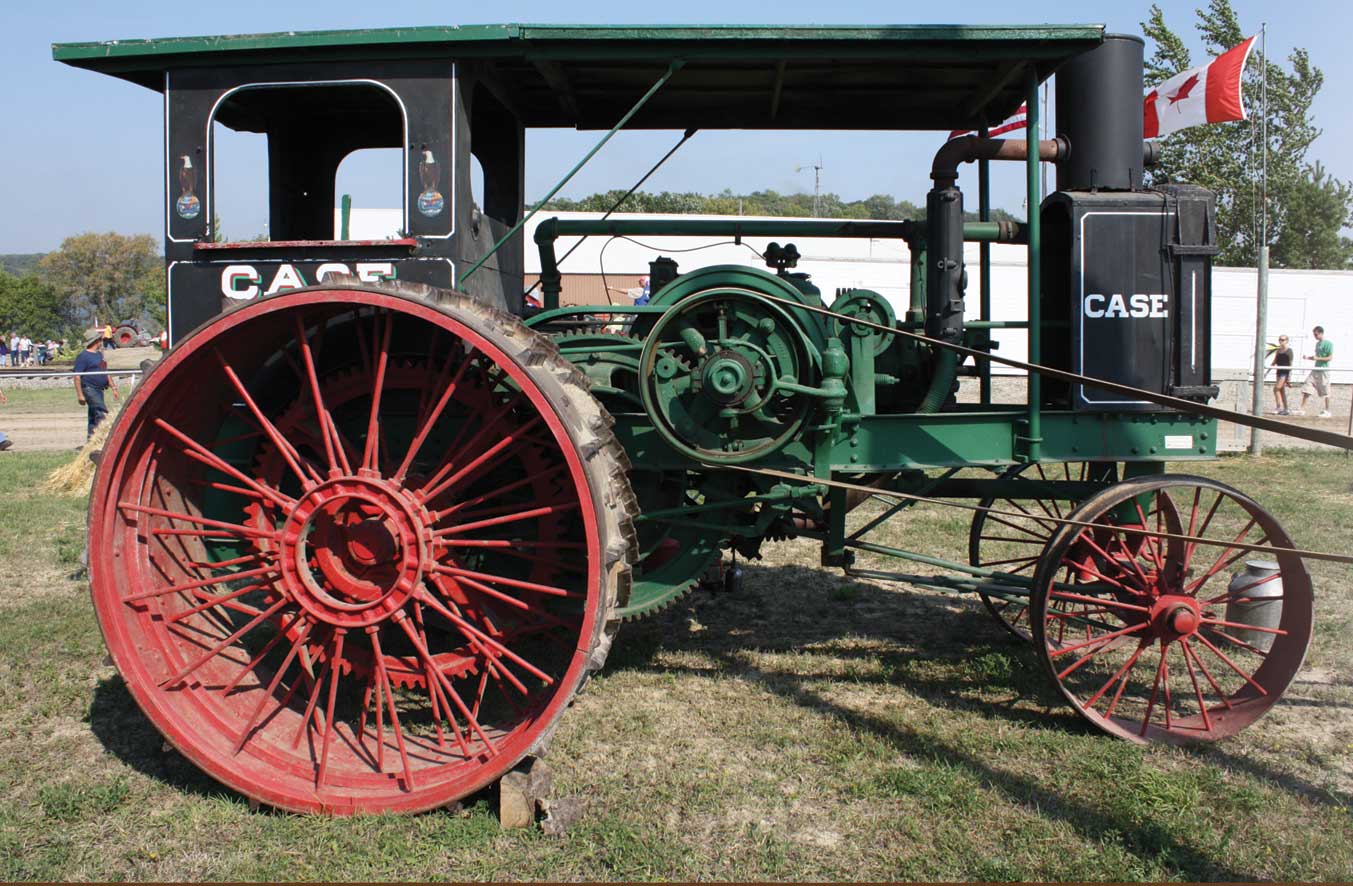 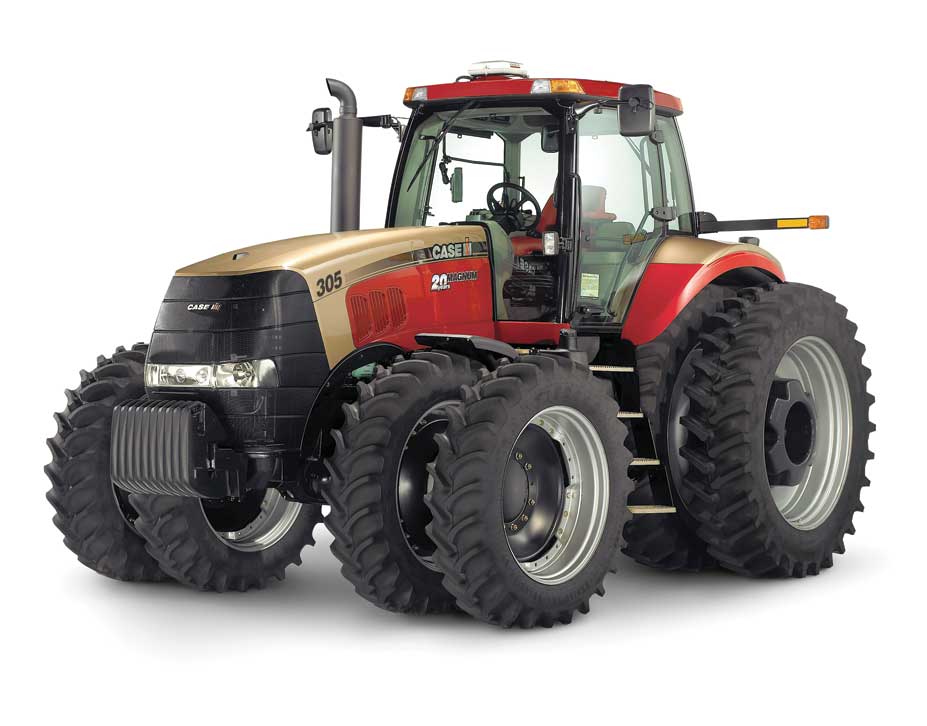 Shortly after 1900, the first farm tractors began appearing in North Dakota. These tractors replaced draft horses and helped the development of early agriculture in the state. Today, technological advancements made to tractors help North Dakota farmers compete in the modern world of agriculture.

Tractors and other implements became larger and more powerful. New species of wheat and grass were developed, which were more resistant to dry conditions and plant diseases.