Life for the early farmers on the North Dakota prairie was challenging and often filled with hardships. Many pioneers who had high hopes of a great opportunity had their dreams shattered by difficulties. Pioneers faced long, harsh winters, isolation (feeling alone), illness, not enough rain, too much rain at threshing time, grasshoppers, dust storms, and prairie fires. A large number of people left the area after staying only a few years. 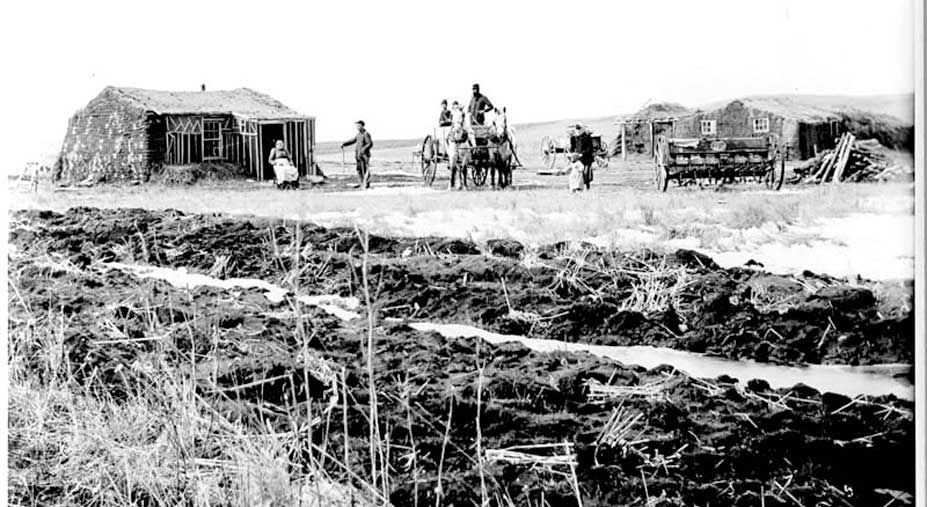 One of the greatest dangers faced by pioneers was the prairie fire. This wall of flames could gallop at great speeds across the prairie, destroying everything in its path. As soon as possible after a dwelling (home) was constructed, the homesteader made a “firebreak.” A firebreakStrip of plowed land surrounding the house and other buildings to stop prairie fires was a strip of plowed land surrounding the house and other buildings. It was hoped that the fire would stop at the plowed strip, which would interrupt its supply of fuel. If a strong wind would be blowing, however, the fire could jump the firebreak.

In the western part of the state where the cattle bonanzas had brought in thousands of Texas Longhorns, wild cattle caused worry for some homesteaders. These unpredictable animals might attack anyone caught on the open prairie without protection.

Other wild animals such as wolves and coyotes made some of the settlers uneasy. There is no record of these animals attacking the pioneers, but coyotes seemed to be everywhere. People were sometimes startled by the sudden appearance of coyotes that followed them at a distance as they walked across the prairie. The greatest enemies of the horse ranchers were the packs of wolves that would prey on the horses, particularly the foals (baby horses).