Figure 41.  The Missouri River is a major river of the Missouri Plateau. (ND Game and Fish Department)

In order to control flooding along the Missouri River, the Garrison Dam was built. This dam is 2½ miles long and is the fifth largest dam in the United States.

When the Garrison Dam was finished in 1954, it created Lake Sakakawea, which is the third largest man-made lake in the United States. It is 178 miles long and from one to 14 miles wide. The shoreline going around the lake is over 1,500 miles long. Lake Sakakawea is a prime recreation area where people enjoy fishing, boating, sailing, and other water sports. 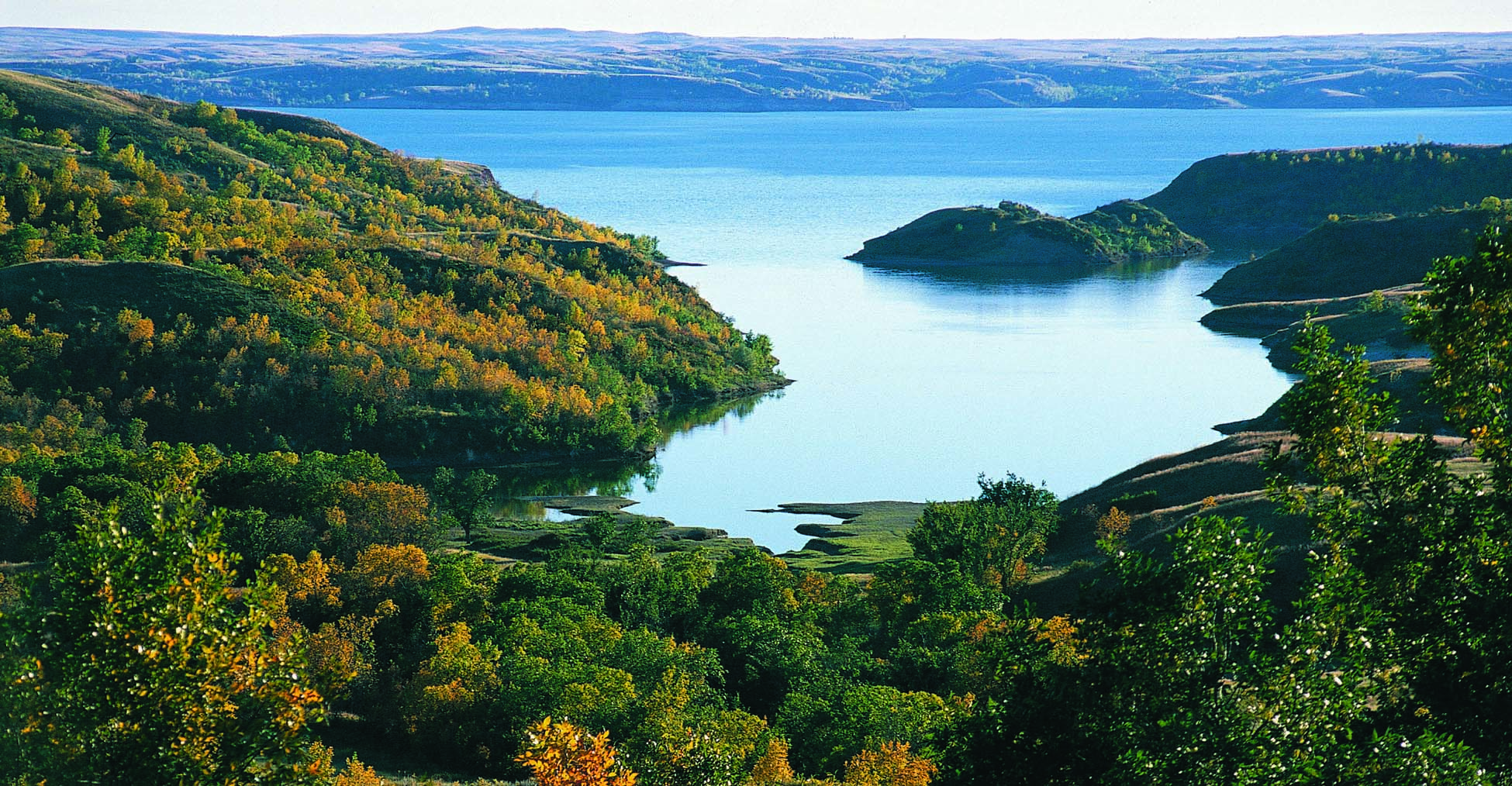 In order for this lake to be created, hundreds of people from the Mandan, Hidatsa, and Arikara tribes were forced to sell their land and move. About a dozen towns were destroyed, and about 155,000 acres of good farmland now lie under the waters of Lake Sakakawea.

The Missouri River in North Dakota is also affected by a dam near Pierre, South Dakota. The water held back by this dam caused the Missouri River to widen and form a lake, which is called Lake Oahe. This lake, stretching 60 miles into North Dakota, is an important recreation area in the southern part of the state.

The Killdeer Mountains are located in western North Dakota about 40 miles north of the city of Dickinson. The Killdeer Mountains are not mountains, and they are not hills. They are buttes that rise about 700 feet above the plain. A butte is a flat-topped, very steep hill with flat sides. At one time the land was level with the tops of the buttes.  But over millions of years the rest of the land was eroded away, leaving only the buttes.

The highest point in the state, White Butte, is located in southwest North Dakota near the town of Amidon. White Butte is 3,506 feet high.

One of the most unusual areas in North Dakota is the Badlands, located in the southwestern part of the state. The Badlands are about 20 miles wide and about 150 miles long. They were carved out of the landscape by the Little Missouri River.

The glaciers that shaped most of North Dakota never touched the southwestern part of the state, but in a strange way, a glacier helped form the Badlands anyway. The Little Missouri River used to flow north, but about 600,000 years ago, a glacier blocked its path, and it was forced to flow east. The new river channel it made for itself was shorter and steeper than the old one. This caused the river water to rush very fast. The fast-moving water washed away land, and wind also carried away soil. Over thousands of years, this water and wind erosion worked to create the Badlands.

The Badlands are known for their great natural beauty. Cliffs, buttes, hills, and valleys look as if they have been painted with many shades of red, yellow, brown, black, and green.