In 1864, the U.S. Congress passed a bill to build a transcontinentalAcross the continent railroad across the northern part of the United States. The bill was signed by President Abraham Lincoln. The job of building this railroad line was offered to the Northern Pacific Railroad• First railroad to cross North Dakota
• Transcontinental railroad Company. Part of the bargain was to give the railroad company 50 million acres of land along the railroad route. In North Dakota, this amounted to almost 11 million acres. The Jay Cooke & Company banking business was in charge of raising money for building the transcontinental railroad.

In 1870, the railroad began laying tracks west from Duluth, Minnesota. Duluth is located on Lake Superior and is connected by water routes to the Atlantic Ocean. On New Year’s Eve in 1871, with the temperature at 28 degrees below zero (Fahrenheit), the Northern Pacific Railroad reached the Red River at Moorhead, Minnesota.

During the winter, a bridge was built over the Red River. On June 6, 1872, a group of women from Fargo took a ferry across the river to Moorhead. They decorated the locomotiveTrain engine with flowers and then got on board. The locomotive chugged across the bridge. These women became some of the first passengers to ride a train in northern Dakota.

Meanwhile, work on the tracks continued westward. A great deal of hard work went into preparing the rail bed. Men with shovels and horse-drawn scrapers worked to build up an earthen road, which was then covered with crushed rock.

Oak ties (timbers), preserved with a special tar, were placed cross-wise on the road-bed about two feet apart. The rails were then laid on the ties and fastened securely with metal spikes driven into the ties.

Ten years after Dakota Territory had been organized, squattersPeople who lived on land they did not own began settling at “The Crossing on the Missouri.” In 1872, Camp Hancock, a military post, was built nearby to protect the railroad crews. It was hoped that the railroad would reach the Missouri River that year, but winter halted construction of the tracks 30 miles away.

The name of the site, “The Crossing on the Missouri,” was changed to “Edwinton” in 1873 in honor of Edwin Johnson, chief engineer of the Northern Pacific Railroad. On June 5, 1873, the first train reached the little town of Edwinton.

Unfortunately, Jay Cooke & Company went broke. Because of a lack of money, the building of the railroad came to a halt at the Missouri River. The railroad company began to look elsewhere for money. Some businessmen from Germany had invested in American railroads before, so the Northern Pacific Railroad hoped they would provide money for this railroad also. 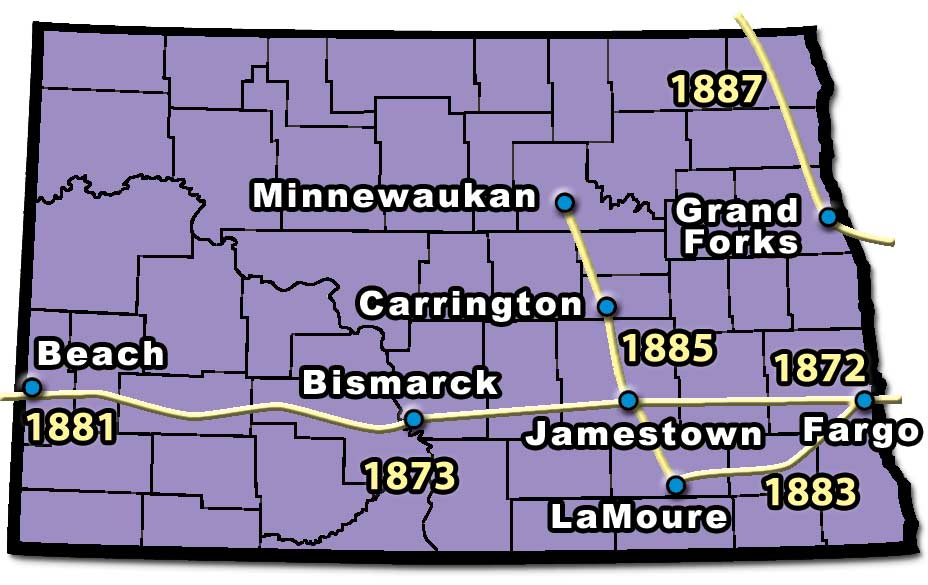 In order to persuade the Germans to invest in this business, the Northern Pacific did something they thought the Germans would like. They renamed the town of Edwinton in honor of the German leader Otto von Bismarck. Even though the Germans did not invest in the railroad, “Edwinton” still became “Bismarck.”

In 1879, the Northern Pacific Railroad Company had raised enough money to continue laying the tracks west of the Missouri River. Materials for building the tracks were sent by train to Bismarck. Because there was no bridge over the river, the materials were placed on barges and ferried across. This could only be done in the summer, however. During the winter, tracks were laid on the ice, and the trains crossed the Missouri River on these temporary tracks.

By November 1880, the railroad crews had finished laying tracks as far west as Sentinel Butte. They thought this was the boundary between North Dakota and Montana, so they drove a silver spike in the rail to mark this site. Actually, the boundary line was about 10 miles farther west and was reached in 1881. 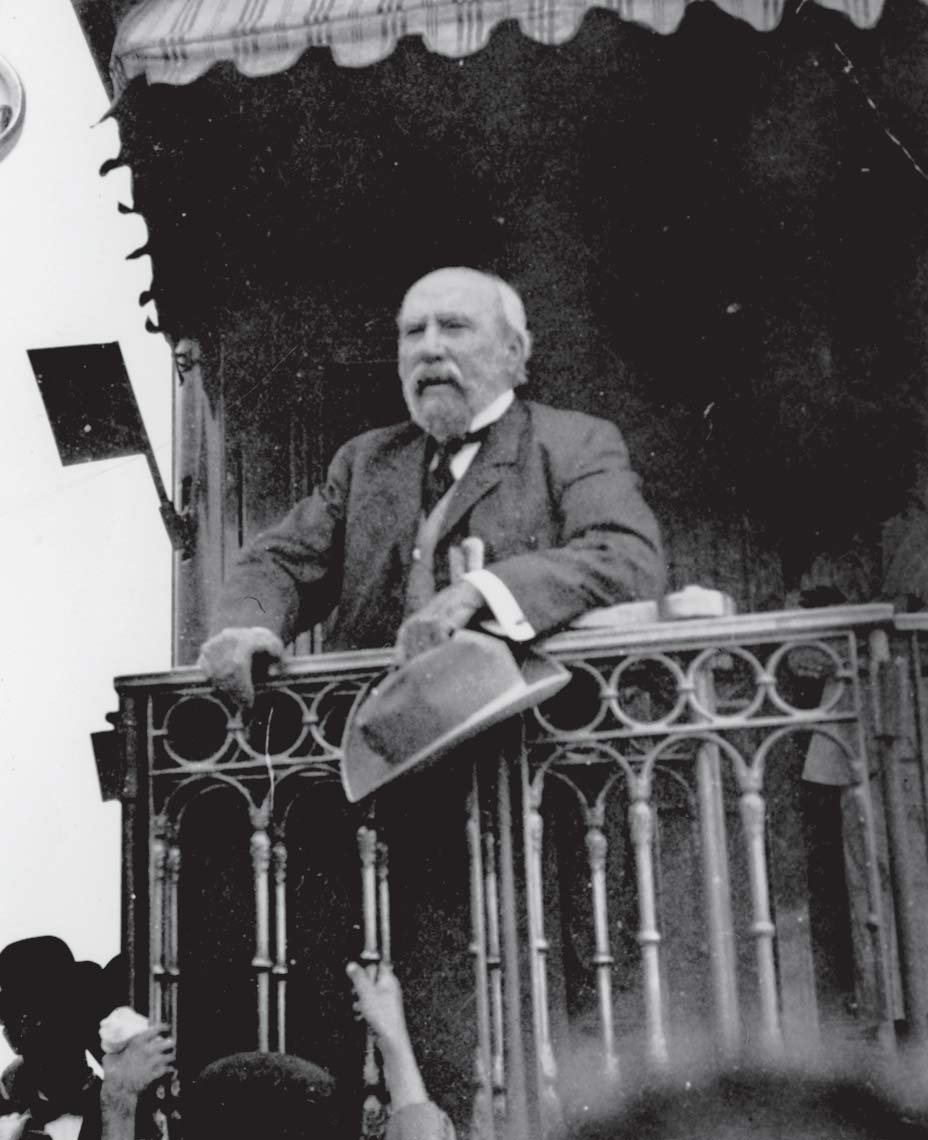 The Northern Pacific Railroad reached the Pacific Coast in 1883. That same year, the railroad bridge across the Missouri River at Bismarck was finally completed. The bridge was built high enough so that steamboats could pass underneath it, but the railroad brought an end to the steamboat era. By 1890, steamboating on the Missouri River was over. The original Northern Pacific Railroad bridge is still in use today.

Other railroad companies were building lines connecting settlements throughout the country. James (Jim) Hill• Built transcontinental Great Northern Railroad
• Nicknamed "empire" had an idea that was different from those of most other railroad builders. Instead of building tracks between towns that already existed, Hill’s vision was to build a transcontinental railroad line through unsettled land and bring settlers in. 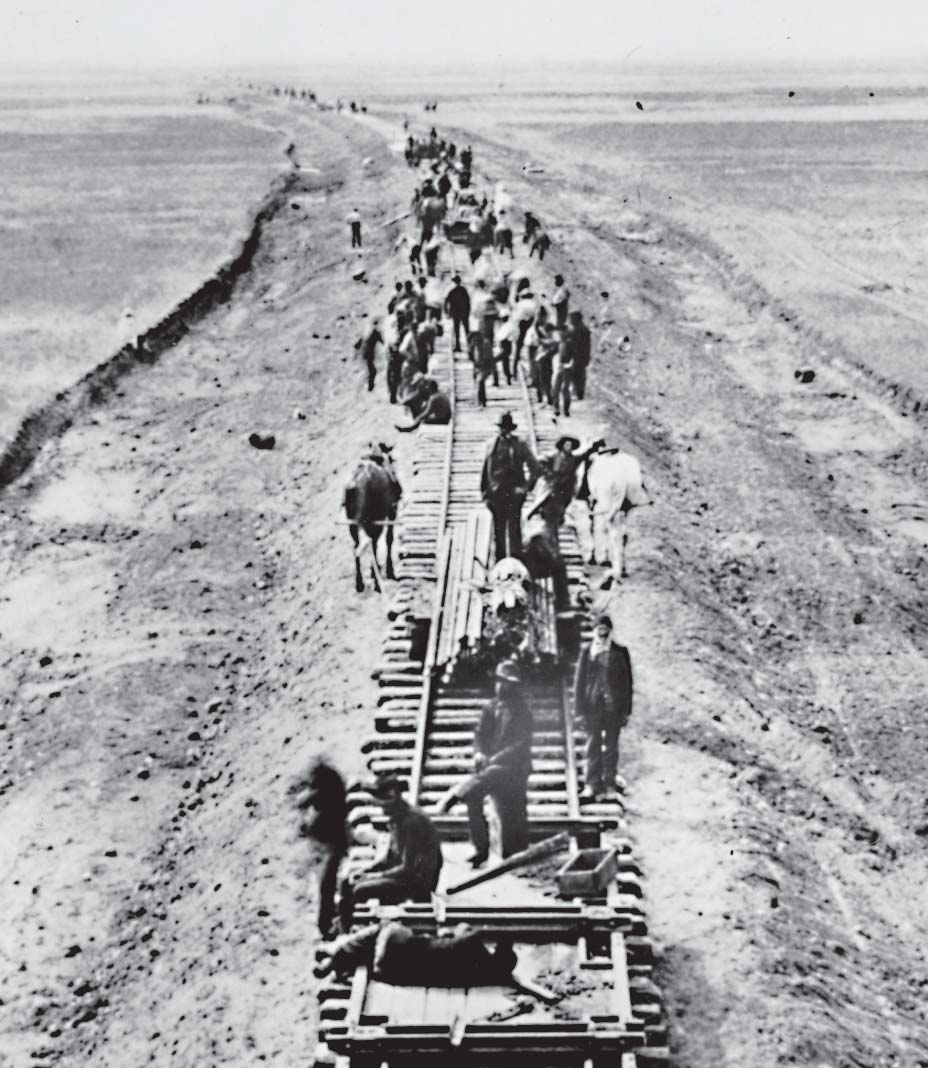 Jim Hill, Norman Kittson, and two other businessmen bought a railroad company in St. Paul and named it the Manitoba Railroad. Tracks were built west from St. Paul to the Red River Valley, reaching Grand Forks in 1880. The Manitoba Railroad then extended a line that connected Grand Forks with Winnipeg. Between 1880 and 1884, several railroad branch lines ran north and south, serving the Red River Valley.

Jim Hill’s railroad company continued laying tracks westward from Grand Forks, reaching Devils Lake in 1883 and Minot in 1886. During the winter of 1886–87, Minot was the headquarters of about 8,000 railroad workers. At that time, Minot had no churches or schools, but it had about three dozen saloons where the railroad workers hung out and gambled for entertainment. 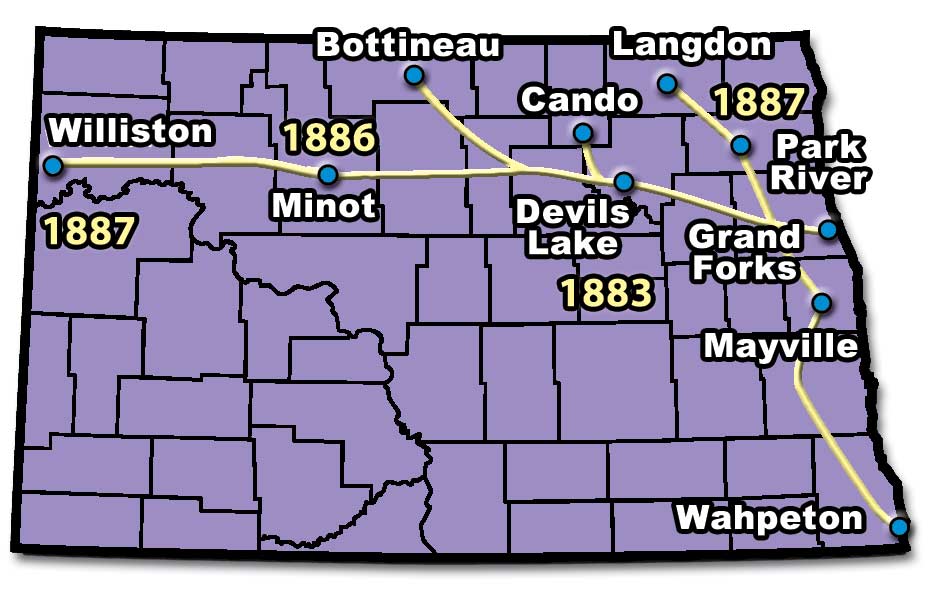 The tracks of the Manitoba Railroad reached the Montana border in 1887. At the same time that the railroad was laying tracks to the west, crews were also building branch lines running north from the main line. 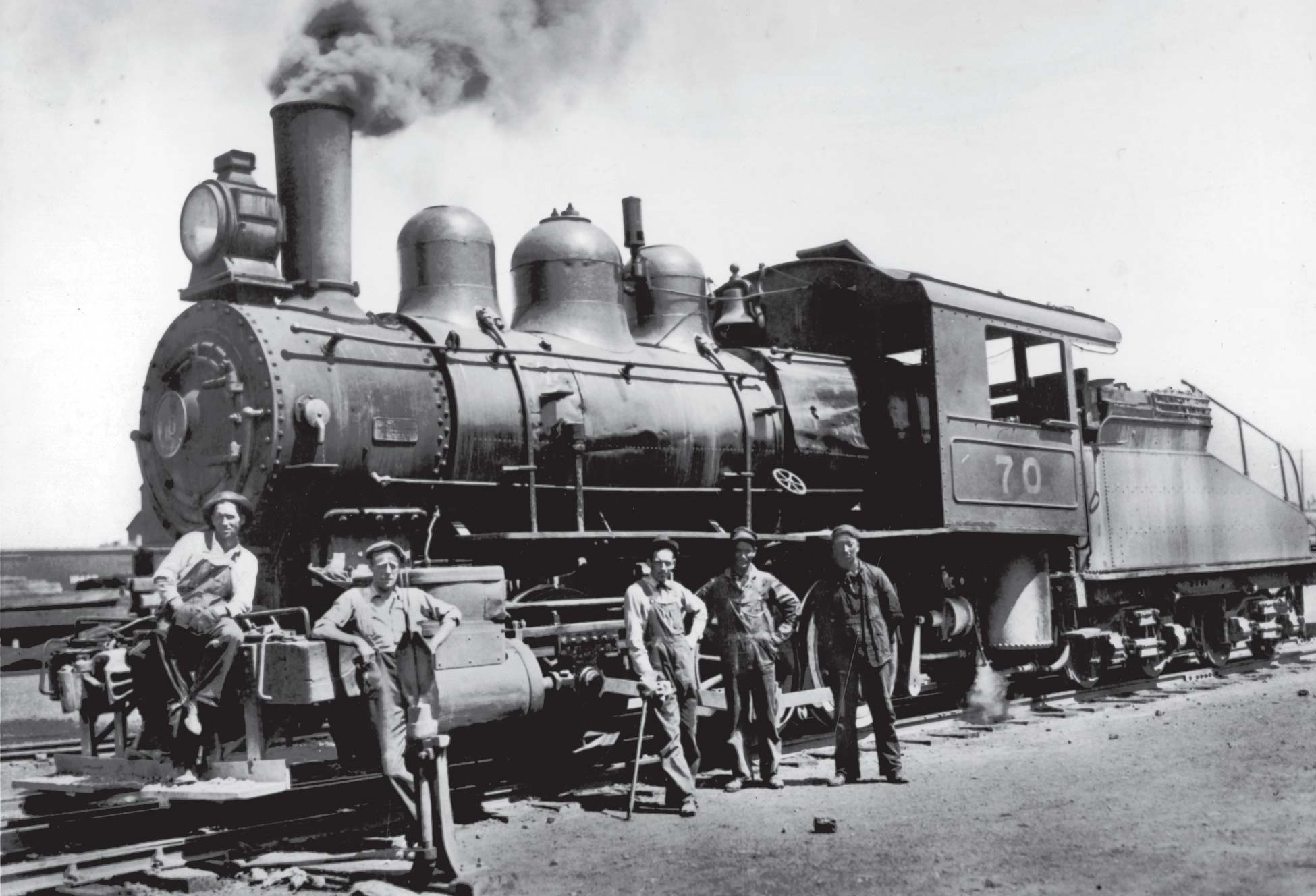 Both the Northern Pacific and the Great Northern transcontinental railroads ran east and west. The Midland Continental Railroad made plans to build a north-south transcontinental railroad. It was to run from Winnipeg, Manitoba, to New Orleans, Louisiana, on the Gulf of Mexico, a distance of about 1,800 miles. Unfortunately, after constructing only 70 miles from Edgeley to Wimbledon, the company went broke and construction was halted.

Less than 50 years later, a person who was to become world famous lived in the Midland Continental Railroad depot. Peggy Lee, a member of North Dakota’s Theodore Roosevelt Roughrider Hall of Fame, was a singer and actress who became one of the most famous entertainers of her time. When her father was the depot agent in Wimbledon, their family lived in the depot. The Midland Continental depot in Wimbledon has been preserved and is now a museum. 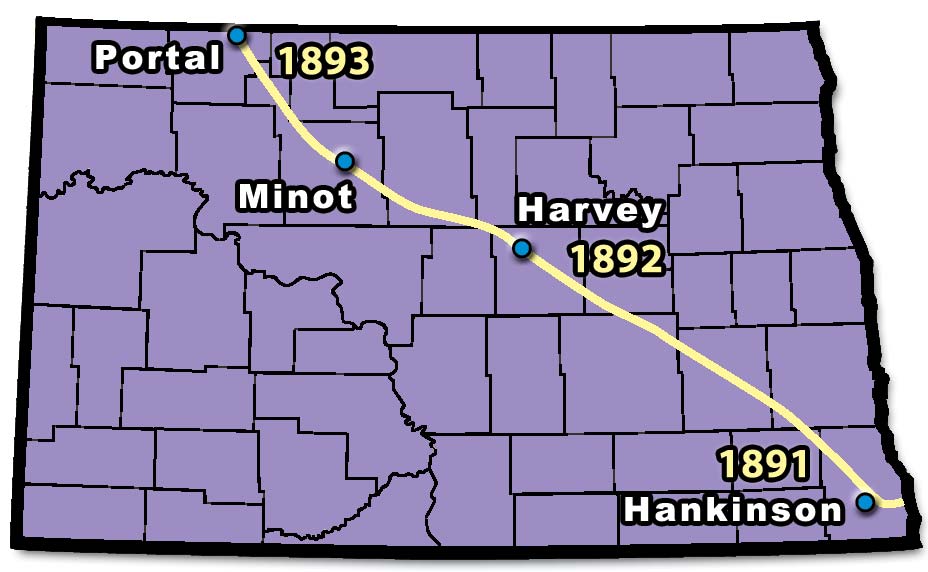 Besides the Northern Pacific and Great Northern lines, a third major railroad line was established in the state. The main tracks of the Soo LineRailroad that ran diagonally across North Dakota from southeast to northwest were constructed between 1891 and 1893. This railroad ran diagonally across the state from southeast to northwest, where it connected with the transcontinental Canadian Pacific Railroad across the border. Several branches of the Soo Line were built in the late 1800s and early 1900s.

After a time, every town served by the railroad had a depotRailroad station (Dee-po). A depot was a railroad station where the train stopped to load and unload passengers and goods. Sacks of mail were brought from the post office to the depot. Sending mail by train was faster and more dependable than it had been by horseback, stagecoach, or steamboat. Depots became main centers of activity in the towns. 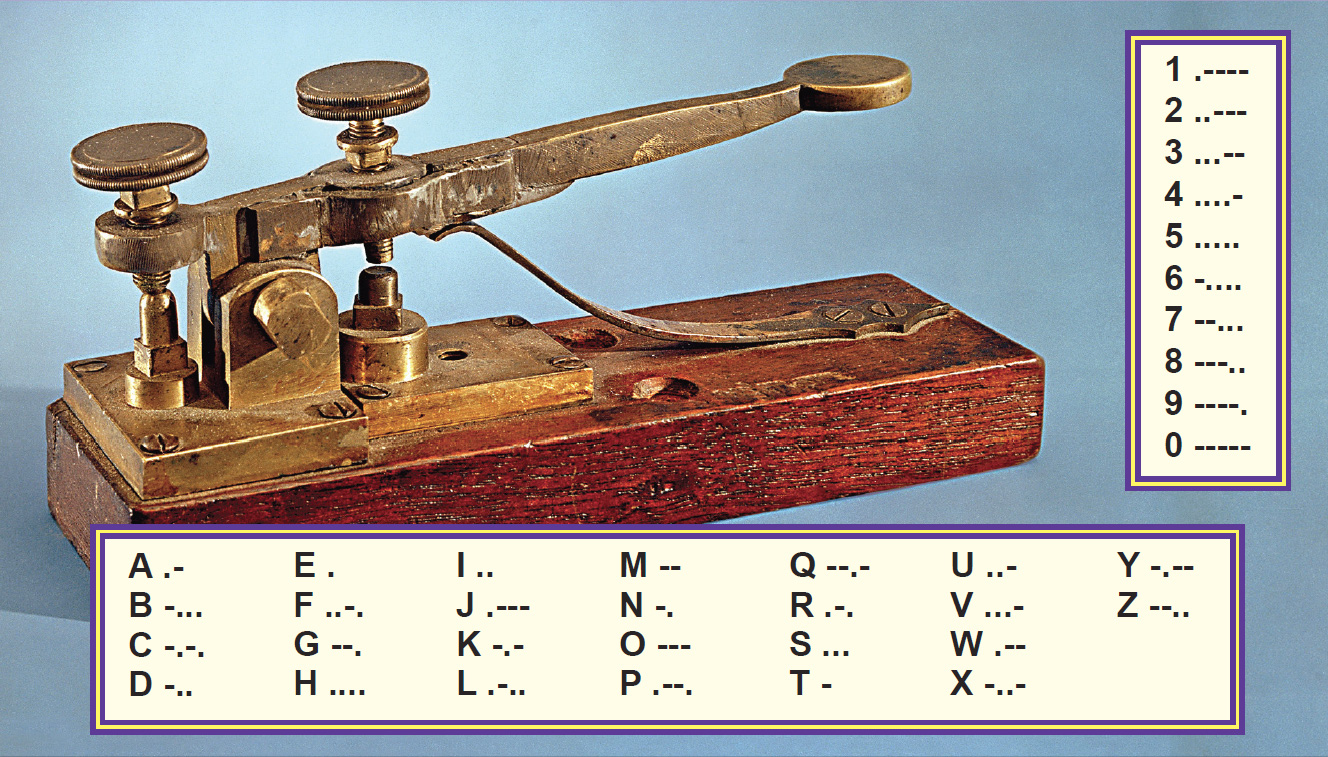 Each depot had an agent who was trained in telegraphy (tah-Leg-rah-fee). This person had the important responsibility of receiving and sending telegraph messages concerning the movement and location of the trains. Orders from the railroad headquarters were sent to the depot agents, who telegraphed the orders to the train engineers. Other duties of the depot agent included selling tickets to passengers; taking care of the freight, or cargo, hauled on the trains; and keeping the depot clean and warm. Most of the depots contained living quarters for the depot agent and his family.

The early steam locomotives could only run forward but could not move in reverse. For this reason, there needed to be a way to turn locomotives around so they could go in the opposite direction. The solution for this situation was the roundhouse.

A roundhouseCircular building with tracks on a turntable for turning train locomotives around" was a large, circular building located along the railroad track. A railroad spur (short track) went from the main track to this building. Inside the roundhouse was a gigantic turntable with tracks. After the locomotive was driven onto these tracks, the turntable was rotated halfway around so that the locomotive faced the opposite direction. Roundhouses were also used for servicing and repairing locomotives.