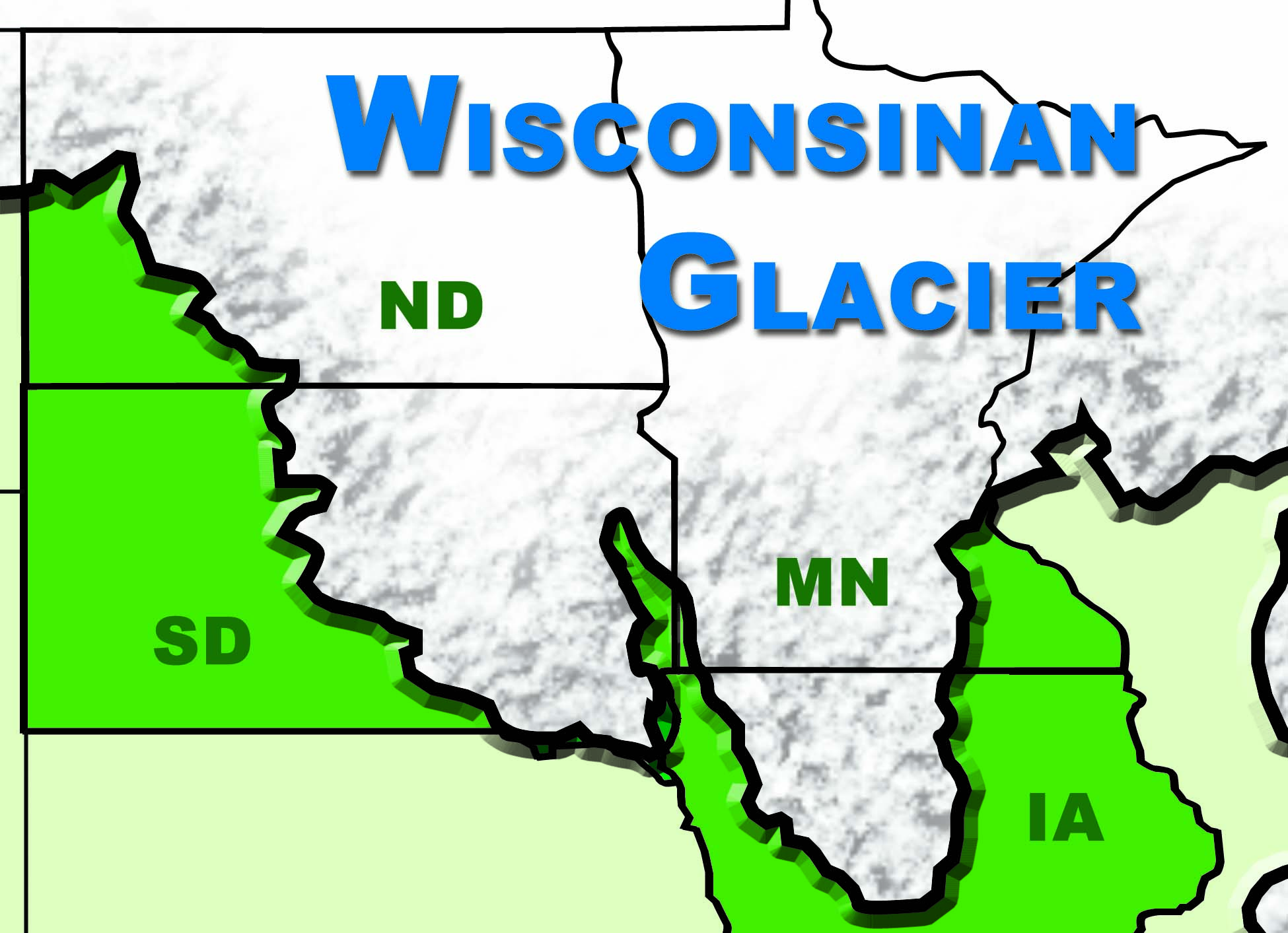 The Quaternary Period started about 1.8 million years ago and continues to the present time. A large part of this period is sometimes called the “Ice Age” because glaciers• Gigantic sheets of ice
• Thousands of feet thick
• Moved south over 20 times from Canada into North Dakota
• Pushed everything in its path ahead of it like a giant bulldozer
• Scraped off hills, ground up rocks, and carried huge amounts of earth
• Hills were formed from great heaps of material left by melting glaciersformed and did not melt for thousands of years. As the climate in northern Canada got colder, snow and ice started piling up, creating huge masses of ice that got to be thousands of feet thick. Some of the glaciers were as much as two miles thick. The glaciers moved south from Canada and scraped the land over 20 times in what is now North Dakota.

As a glacier got thicker and heavier, its great weight made it start spreading out. It moved slowly inch by inch and pushed everything in its path ahead of it like a giant bulldozer. It scraped off hills, ground up rocks, and carried huge amounts of earth along with it as it slowly inched along. Riverbeds filled in, and the rivers pushed to other places where the rushing water created new riverbeds and valleys. When the climate started warming again and the glaciers began melting, the great heaps of material that the glacier carried were left wherever the melting took place. Some of this material resulted in the gently rolling hills found in parts of North Dakota. 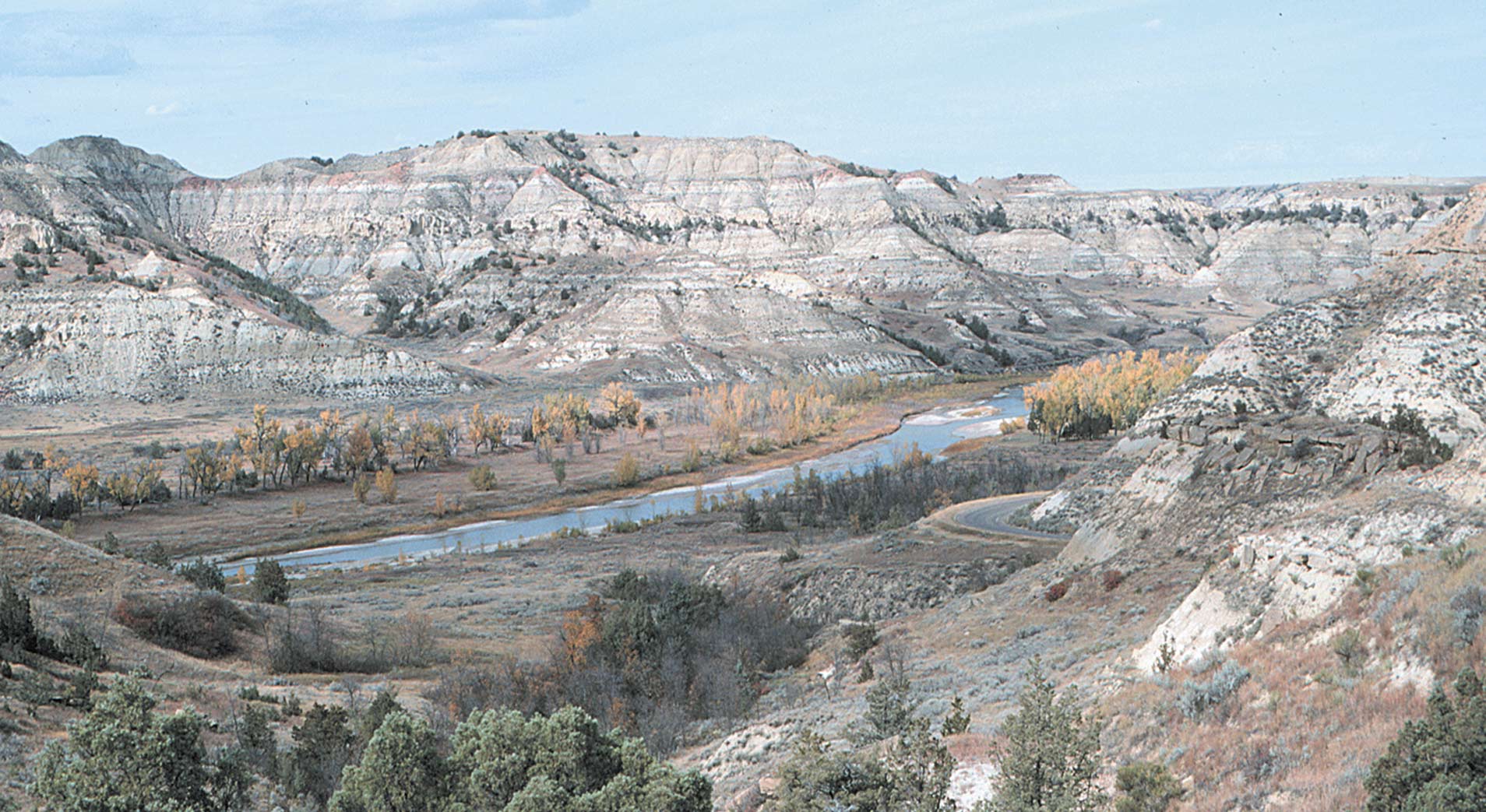 Figure 27.  North Dakota Badlands along the Little Missouri River in the South Unit of Theodore Roosevelt National Park. The rocks in this photograph are about 60 million years old. The dark layers of rock are lignite, and the pink layers of rock are clinker. (ND Geological Survey) 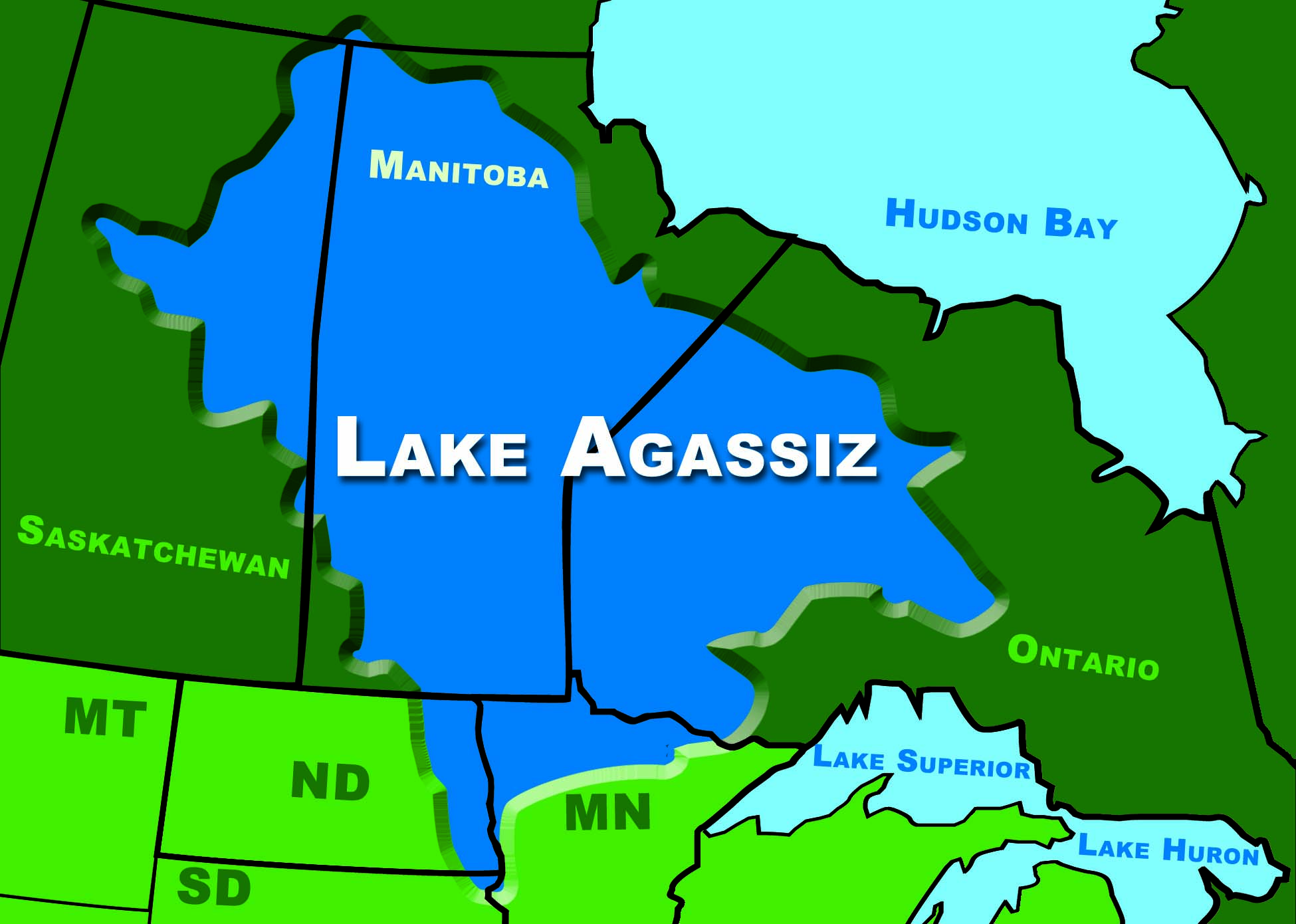 When the Wisconsinan glacier in North Dakota melted for the last time, glaciers still existed to the north in Canada. These glaciers formed a huge dam which blocked the rivers trying to flow north. The water backed up and formed a gigantic lake. Some of the water in the lake came from the melting glaciers, but most of it was runoff from the south that could not flow northward because its way was blocked by the glaciers in Canada.

Figure 29.  An Ice Age mastodon (elephant-like animal). North Dakota appeared similar to this at the end of the Ice Age about 10,000 years ago. (ND Geological Survey) 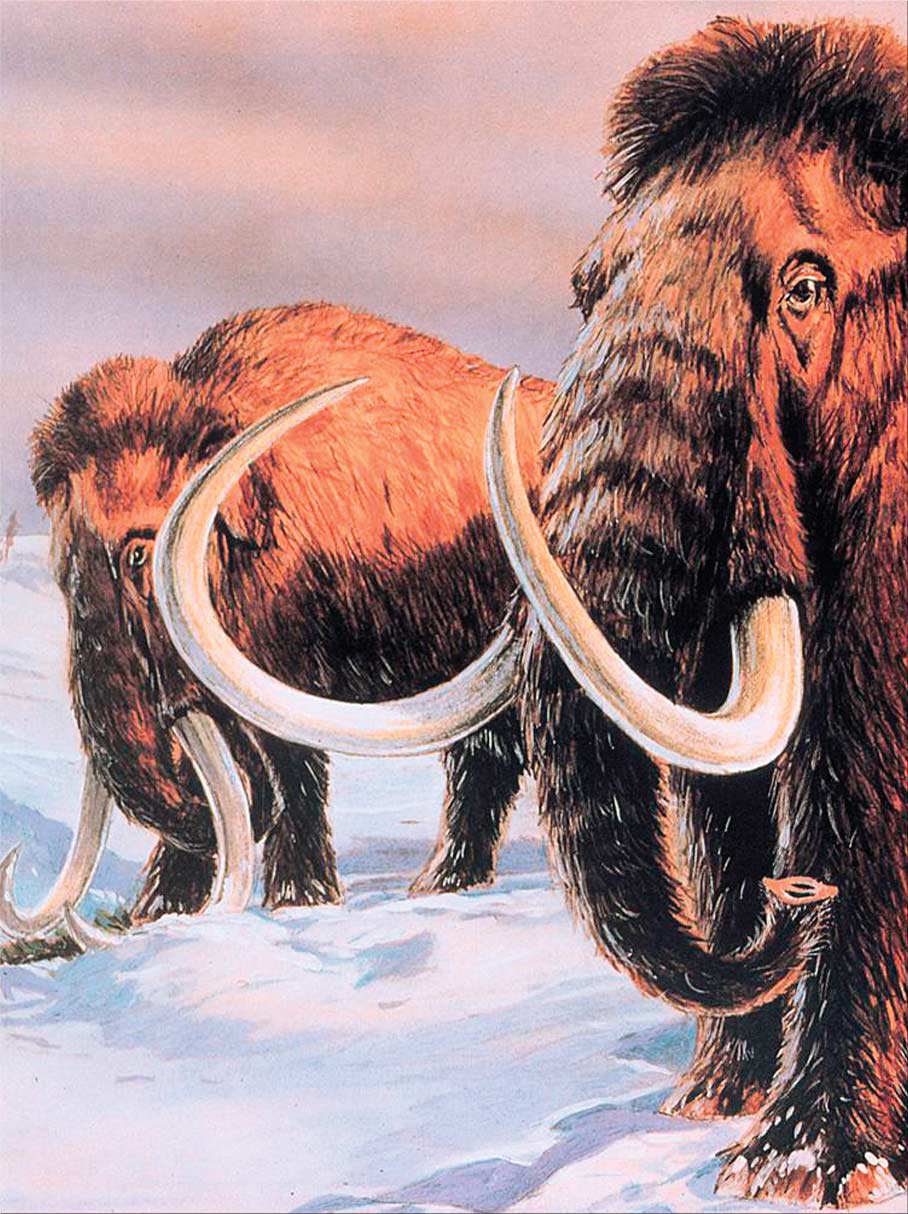 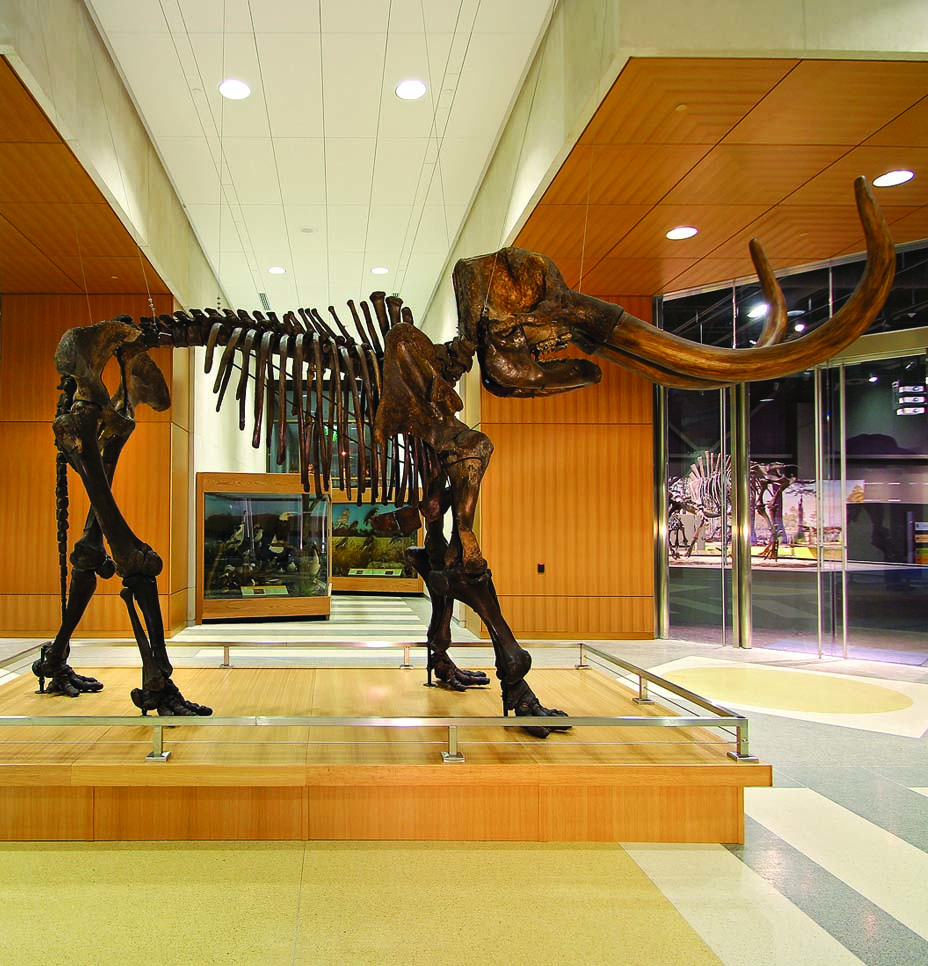 Mastodons and woolly mammoths were very large mammals that lived in North Dakota about 11,000 years ago. They looked kind of like elephants. Long, shaggy hair covered their bodies, and they had long tusks. These herbivores usually traveled in small herds.

Lignite coal burning underground in the Badlands formed a type of red rock called clinker. Clinker is sometimes crushed and used as a road surface instead of gravel in western North Dakota. People who live in the area call this clinker "scoria" (skor-yah). Clinker, along with many different types of rocks and layers of soil, cause the Badlands to be very colorful and beautiful.

The area we now call North Dakota changed a great deal over the past 4.5 billion years through the Precambrian, Paleozoic, Mesozoic, and Cenozoic Eras. The Quaternary Period of the Cenozoic Era began about 1.8 million years ago and continues on today. The land features are still changing, but most change takes place so slowly that it may take thousands, or even millions of years to notice any big differences. Time marches on!