Chippewa Indians had come to North Dakota from the forests and lake areas of Wisconsin and Minnesota. They had always hunted and trapped for a living, and they also were involved in fur trade. They traded first among other tribes and later with European and Euro-American fur traders.

During the years when France controlled most of North Dakota, many Chippewa women married French fur traders. Their children, who were half Chippewa and half French, were called Métis• A person born of an Indian parent and a European (“white”) parent
• Means “mixed blood” (may-tee), which means “mixed blood.” Men who later came from Scotland, Ireland, and other European countries also married Indian women from various tribes. The children of any Indian and white couple are called Métis.

Through the years, descendantsGrandchildren, great-grandchildren, etc. of the first Métis set up their own communities and developed their own way of life. This lifestyle blended parts of both the Indian and European cultures. The people dressed in a combination of Indian and European clothing, and their language was influenced by both of their cultures. By the 1820s, the Métis made up most of the population of the Red River Valley.

Many Métis made their living by hunting or trapping on their own and then selling their hides and furs at trading posts. The Métis also became known as the “Buffalo Hunters” because they were so skilled in hunting bison. They went on semi-annualTwice a year hunting trips into central North Dakota and sold great quantities of bison hides, meat, and pemmican to fur traders. 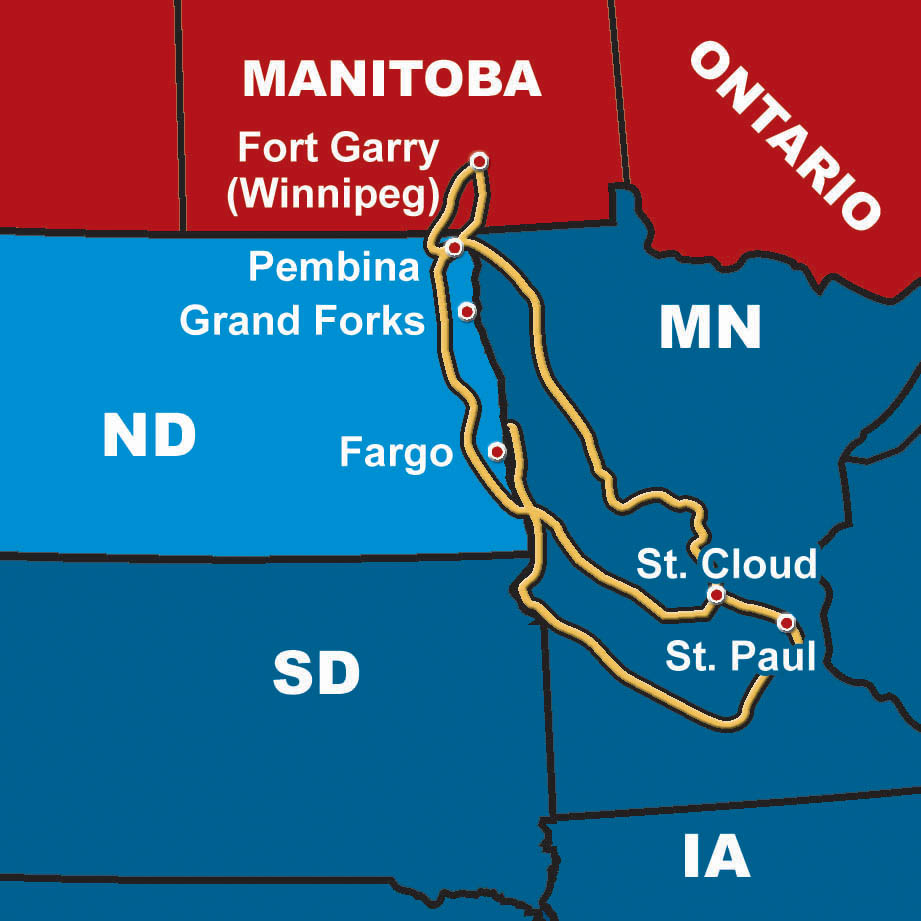 The Red River was a water highway used by the fur trading companies in the Pembina area. The Red River flows north, so traders shipped furs downstreamWith the current to Fort Garry located at the confluence of the Red and Assiniboine Rivers.

From there, the furs traveled on the Nelson River to Hudson’s Bay and then to the Atlantic Ocean. The furs were shipped to Great Britain or France. Manufactured goods were shipped back through Hudson Bay to Fort Garry. The goods were sent upstreamAgainst the current (south) on canoes to Pembina.

In 1801, French-Canadian workers at Fort Henry began to experiment with the type of two-wheeled carts they had used in their villages in Quebec (eastern Canada). They quickly found that the cart was a good form of transportation, but horses or oxen were needed to pull the cart. There were very few horses and oxen in the Red River Valley in those days. It was too difficult to transport horses by boat from Montreal to Fort Henry. There were only two or three horses at Fort Henry in 1801.

In the summer of 1801, Henry’s employees went west to the villages of the Assiniboine Indians and traded for horses. They brought the horses back to the fort to use as draft animals (animals used for work). The men usually used the carts when they went to hunt meat. The carts were easy to load and could carry nearly 500 pounds or as much as five horses could carry on their backs.

The carts came to be known as Red River carts.• High, two-wheeled cart pulled by an ox or a horse
• Invented by Métis
• Could carry huge amounts of goods to major trade centers
• Also called “ox carts” For many decades, Métis drivers built and used the carts when hunting bison and when transporting furs. The carts had two high wheels, about five feet in diameter (across). The cart was suspended between the wheels. Long poles connected the cart to the horse. The cart was made entirely of wood and leather. The wheels were not oiled so they screeched as they turned around the axle. 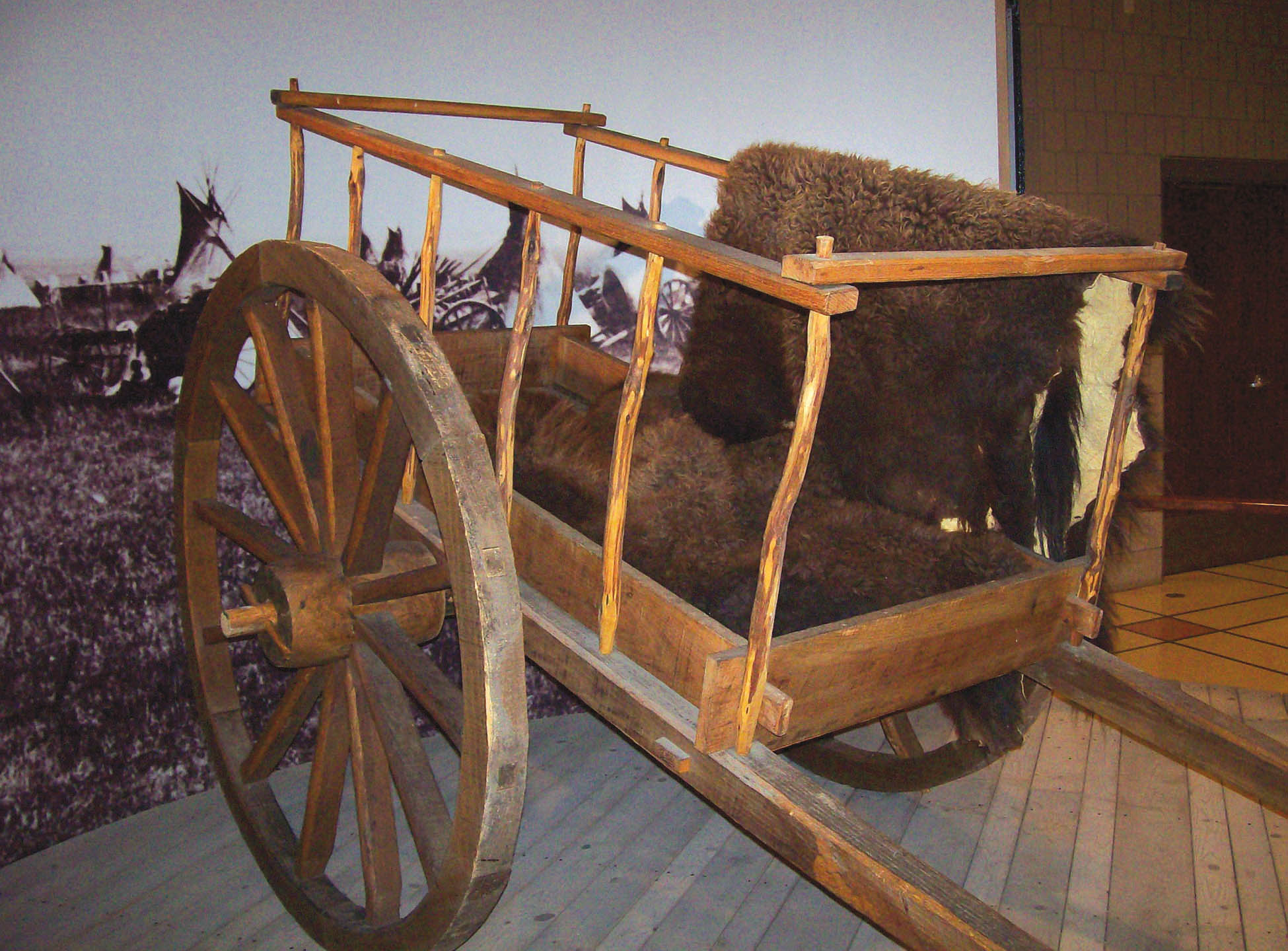 There were no roads in the Red River Valley, so the carts traveled across the prairie grasses. The Métis organized great caravans of as many as 200 carts. The Métis made regular trips to Fort Garry• Present-day Winnipeg, Manitoba
• Located on the Red River north of Pembina or St. Paul carrying furs or meat and returning with merchandise. These regular trips wore trails in the prairie. The sound of the screeching wheels could be heard a long way away. 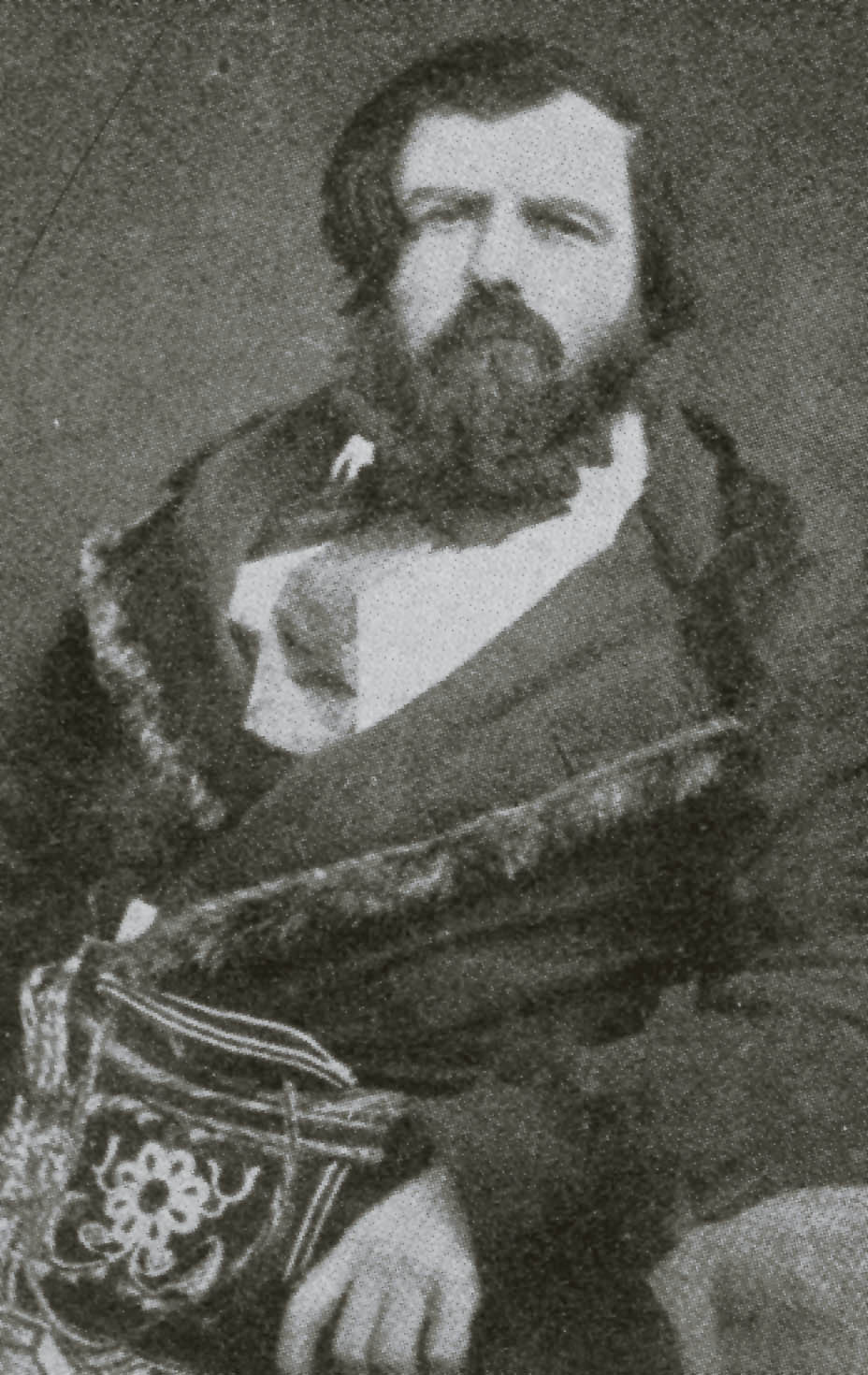 Large groups of Métis from the entire Red River Valley met semi-annually for their bison hunts into central North Dakota. Hundreds of Red River carts were used to bring back hides, furs, robes, and pemmican to sell at the trading posts.

Joe Rolette was a Métis who was born on the frontier but went to school in New York. After he grew up, he returned to the Red River Valley and worked for the American Fur Company. He moved to Pembina in 1840. Rolette was a friendly and fun-loving person who was given the nickname “Jolly Joe.” Rolette was later honored by having the town of Rolette named after him.

St. Paul• Trade center in Minnesota located about 400 miles southeast of Pembina
• Destination for Red River cart caravans was a trade center located on the Mississippi River about 400 miles southeast of Pembina. Furs and pemmican transported by Red River carts to St. Paul were shipped by steamboat down the river to St. Louis, Missouri. From St. Louis, they were shipped on the Ohio River to the eastern United States. They could also be sent all the way down the Mississippi River to the gulf port at New Orleans. 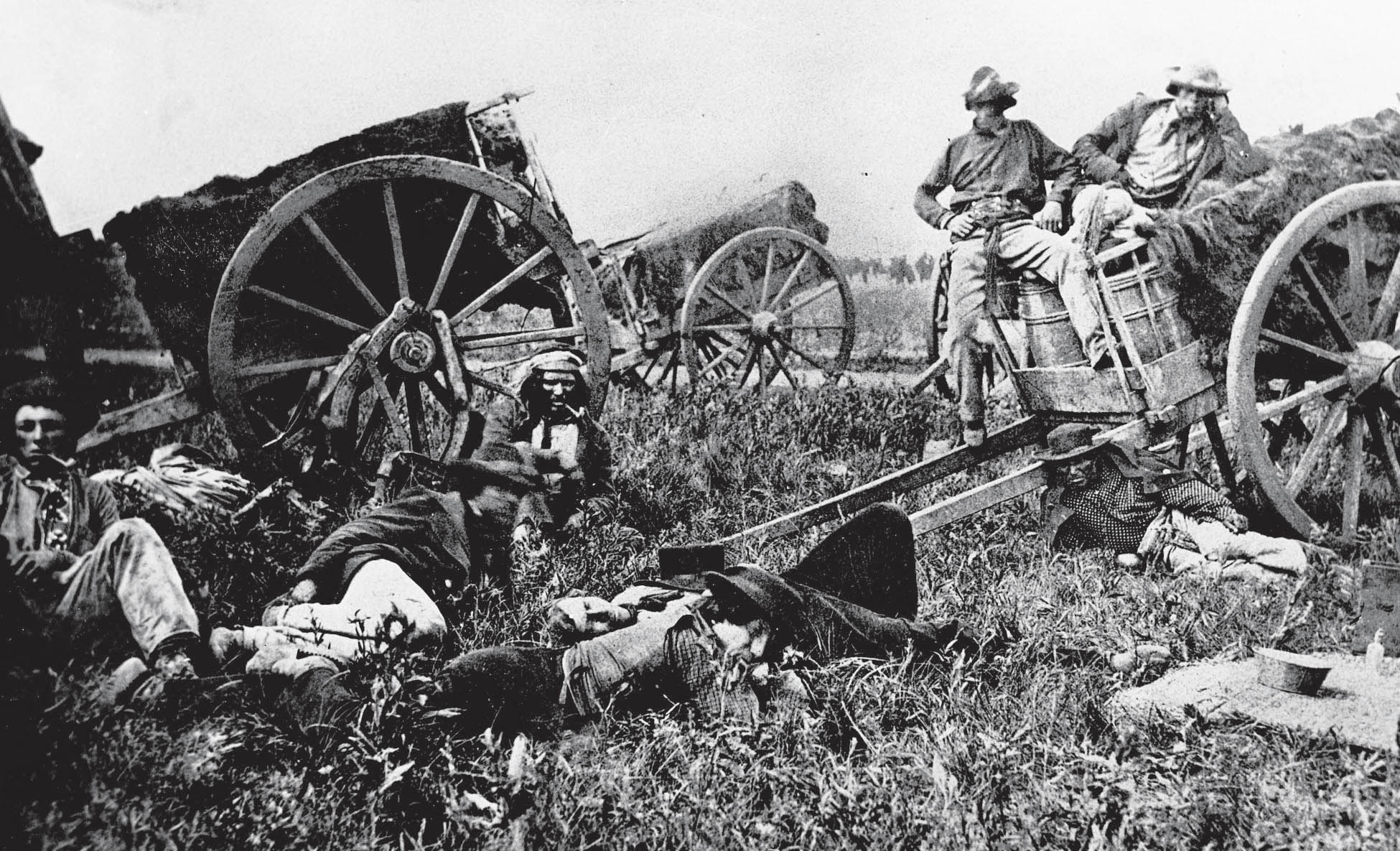