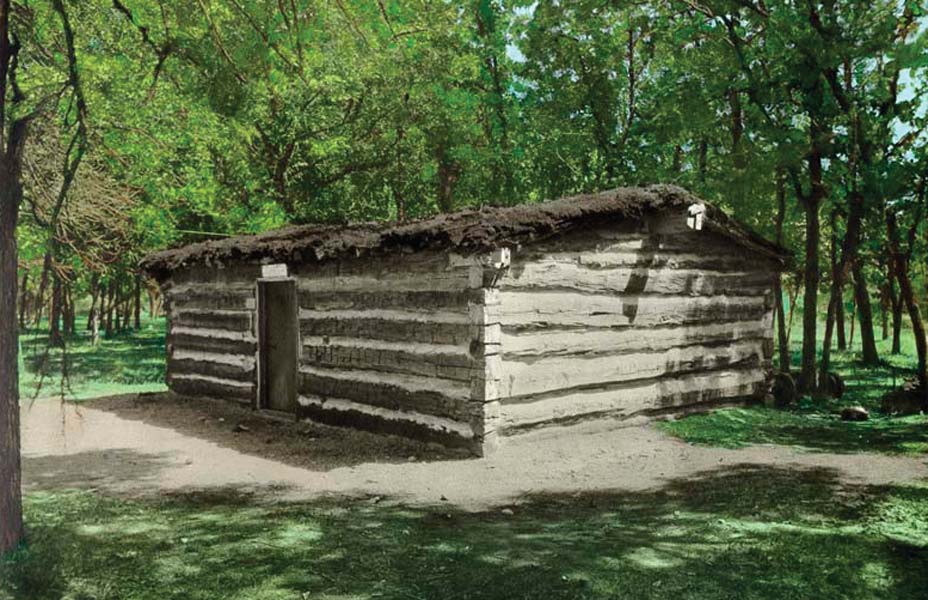 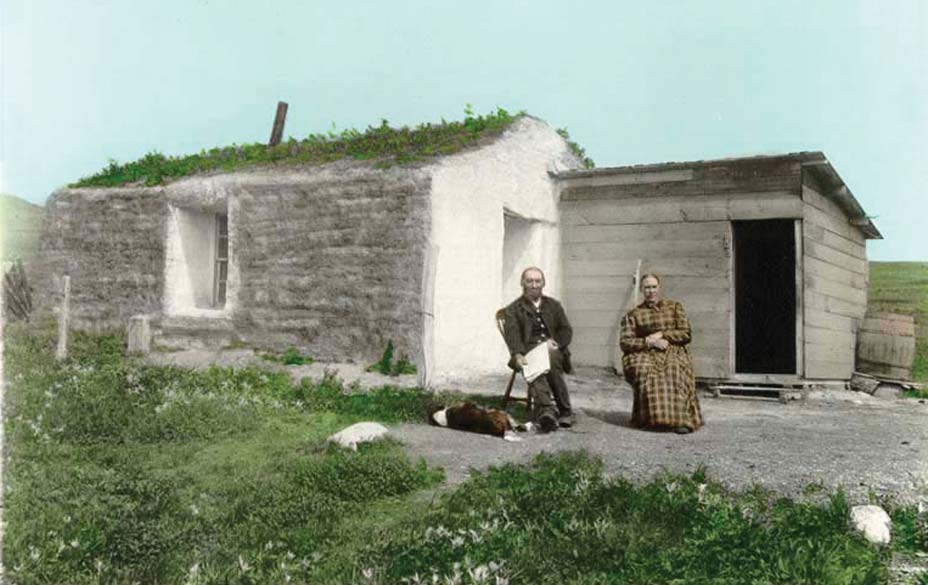 According to the Homestead Act, each homesteader was required to live in a dwelling at least 8 feet by 10 feet in size. Building a house was the first task facing the pioneers who were filing claims. In the early days of North Dakota homesteading, generally one of four types of homes was constructed, depending on location—dug-out homes, log cabins, sod houses, or frame (wooden) houses.

If the area had hills, a dug-out home could be carved out in the side of a hill. These homes were dark, damp, and contained unwelcome roommates, such as mice, insects, and spiders. Since North Dakota has few hills, this type of home was not possible in most places. Dug-out homes were generally used for only a short time until a more permanent home could be constructed.

The northeastern part of the state had enough timber so that log cabins could be built. In fact, log cabins were the first types of permanent pioneer homes to be built in northern Dakota, since areas along the rivers were settled first. Log cabins were usually found within 12 miles of a river where trees were available.

A family or neighbors usually worked together to construct a sod house. The first step was to turn over the sod with a breaking plow. A breaking plow• Implement with a heavy, curved blade to turn over sod
• Pulled by a horse or an ox was an implement pulled by a horse or an ox. It had a heavy, curved blade that dug into the sod and turned it over.

After about an acre of sod was plowed, the sod strips, which were about 4 inches thick, were cut by a spade (small shovel with a sharp blade) into rectangular slabs. The most common size for a slab was 12 inches by 24 inches (1 ft. wide and 2 ft. long).

The first layer of slabs was laid on the ground, grass side down, in a rectangle shape to start the four walls of the house. They were placed so that the 24-inch sides were touching each other. This made the walls 2 feet thick. Layers of sod, grass side down, were then placed on top of each other, staggered as in laying bricks. Openings were left for the door and windows. Wooden frames were used for supporting the door and the windows. Because earth is such a good insulator, soddies were cool in the summer and warm in the winter. They were also fireproof. 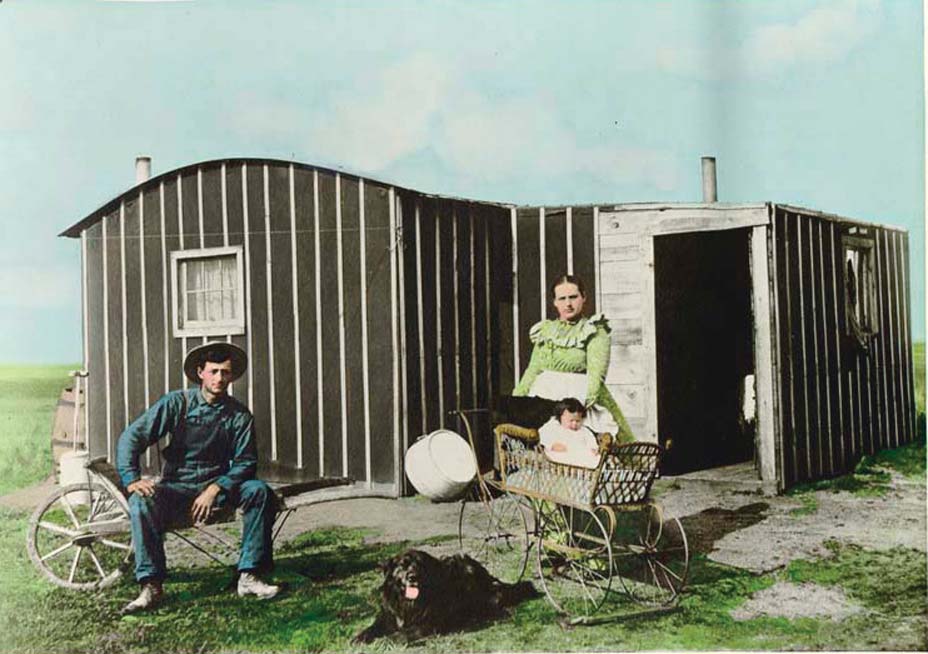 Figure 77. Early homesteaders gather for a visit near a sod home. (SHSND C0694) 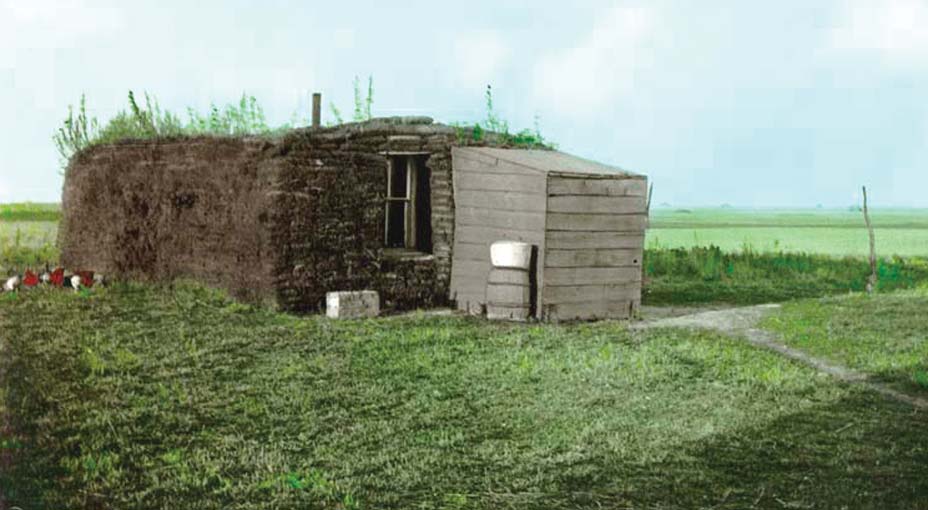 Figure 78. Claim shanties were built by early settlers until they could “prove-up” their homestead. (Hultstrand Collection, Institute for Regional Studies, NDSU, 2028.015) 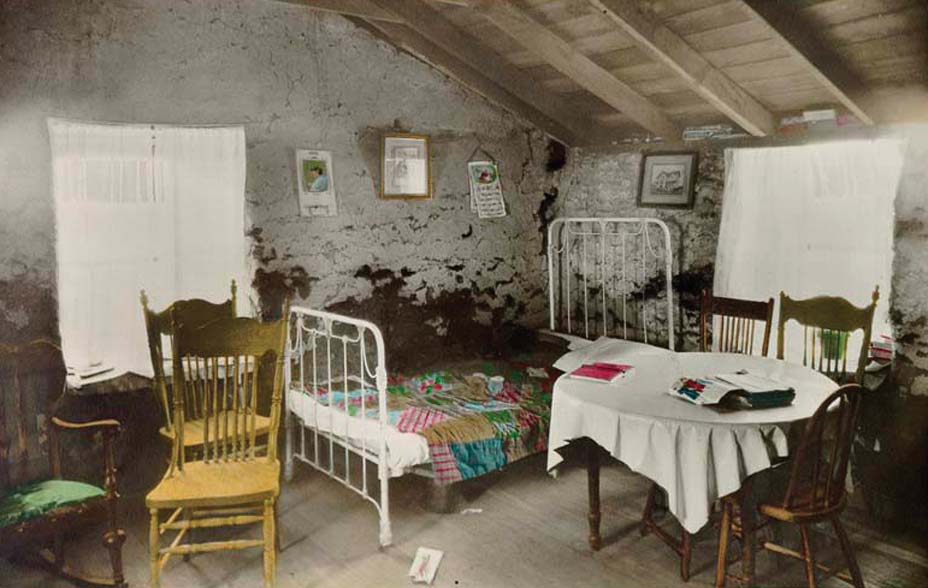 Some settlers used natural materials to build homes that were stronger and more permanent than the soddies. Many Germans from Russia used sun-dried bricks made of clay (a fine-grained soil), manure, and straw.

The walls of these homes were almost three feet thick. Barns and sheds
were often attached to the houses of German and German-Russian families. These additions resulted in long, rectangular buildings.

The Danes also built houses of sun-dried brick. They covered the outsides with boards and whitewashed the interior. WhitewashMixture containing water and lime used as paint is a mixture containing water and lime. Whitewash helped to make the homes look light and clean. Homemakers of many ethnic groups used whitewash to “paint” the interior walls of their homes.

A few settlers in the western Missouri River area constructed stone houses. These permanent homes were costly and difficult to build. Germans who settled west of the Missouri River, where clay was abundant, built homes made of brick.

After lumber became more plentiful through railroad transportation, the homesteaders started building claim shantiesOne-room, wood-frame house used on homestead claim out of wood. These one-room frame houses were constructed of “green” lumber, or freshly cut lumber that has not had time to dry. These shacks were then covered with tar paper. It cost about $15 for the materials for these little houses, which took a day or two to build.

As the lumber of a wooden shack dried, it shrank, and cracks appeared in the walls. Rags or newspapers stuffed into the cracks did not stop the summer dust or the howling winter winds from invading the home. Sometimes sod was placed around the outsides of the walls for insulation.

Pioneer women came up with many creative ways to make the insides of their homes attractive and inviting. They sometimes covered the ceiling and walls of sod houses with cheesecloth, a loosely woven cotton material. This would help to keep the dirt from falling into the room.

Newspapers were often fastened to the inside walls of claim shanties as insulation. After the newspapers were up, the walls were whitewashed, which made the interior of the house white. Sometimes women used cloth, wallpaper, or other materials to decorate the walls.

Claim shanties, like sod houses, were not meant to be permanent homes. They were built for the purpose of proving up the claim. After the homesteader had proved up, he or she would build a larger, permanent house. Five years was the average length of time homesteaders lived in their first homes.

The most important item in every home was the stove. Small houses had only one stove, which was used both for heating and for cooking. The big cookstove in the kitchen was called a range. Ranges burned wood or another fuel. A fire was started in the range early in the morning, and it was kept going until after supper had been cooked in the evening. A reservoir, or tank, built into the side or back of the stove kept water hot all day for dishwashing and other needs. Coffee was available any time of the day from the coffeepot, which had its permanent place on the range. 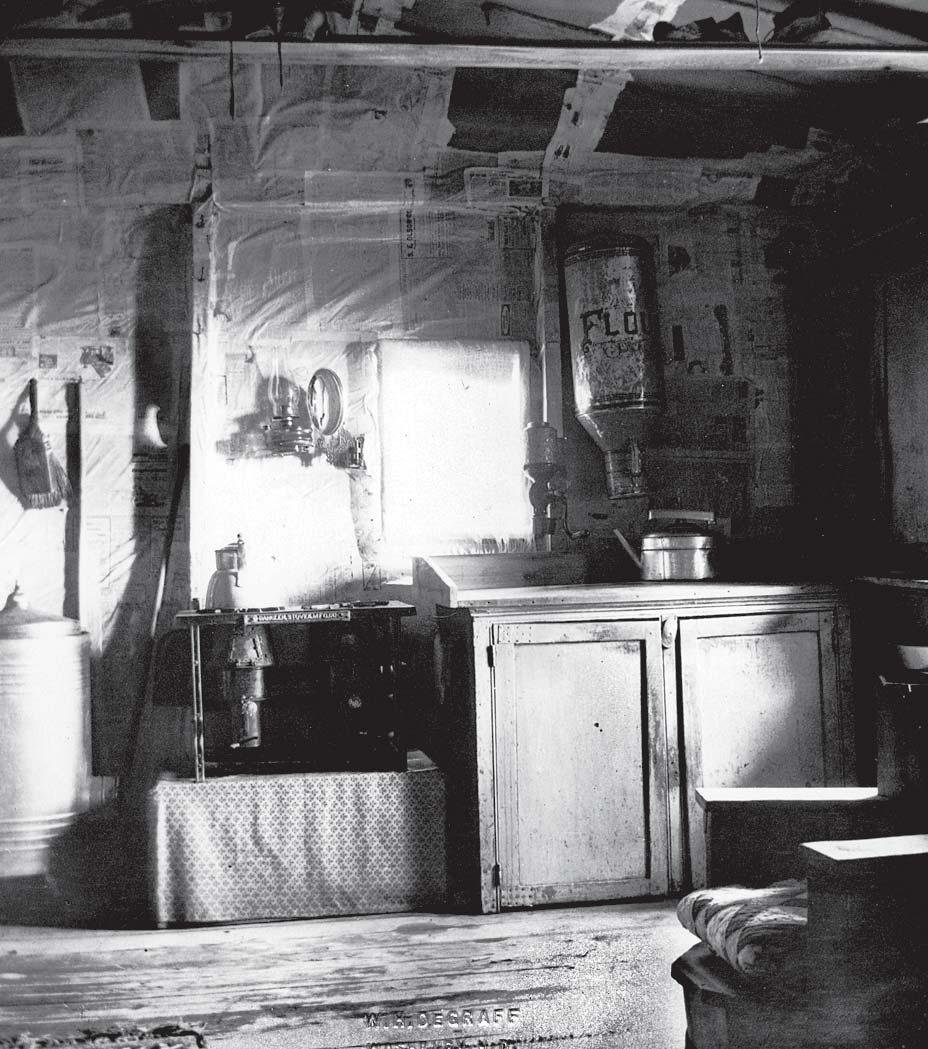 Heating homes on the treeless prairie was a challenge. Settlers who lived near timbered riverbanks had a ready supply of wood, but those who did not have wood available found other fuel sources.

In the earliest days of homesteading, buffalo chips• Dried buffalo droppings
• Used as fuel in pioneer stoves (dried droppings) were abundant on the prairie. Later, cow chips became available. These chips were gathered in baskets and stored beside the house to use as winter fuel.

The Germans from Russia prepared a special fuel that gave more heat and burned longer than cow or buffalo chips. They mixed manure with straw, had horses trample it to pack it down, let it dry, and then cut it into blocks. The blocks were then sun-dried and stacked for the winter.

Lignite,Very soft coal found in western North Dakota a very soft coal, was found in some of the western regions of the state. People who settled in the lignite region found seams of coal in streambeds and riverbanks. People also came from farther distances to haul lignite back to their homesteads.

Other fuel sources included corncobs, twisted ax straw, and twisted hay. Tall, coarse grass grew in the sloughs (slews), or potholes, and when this grass was moistened, it could be twisted tightly, dried, and used as fuel.

Many pioneers made their own furniture. A bed consisted of a wooden frame with a homemade mattress. It was common for the mattresses to be stuffed with straw. When the straw got mashed down so much that it was no longer comfortable, it could easily be replaced. If chickens or other poultry were available, mattresses were stuffed with feathers. 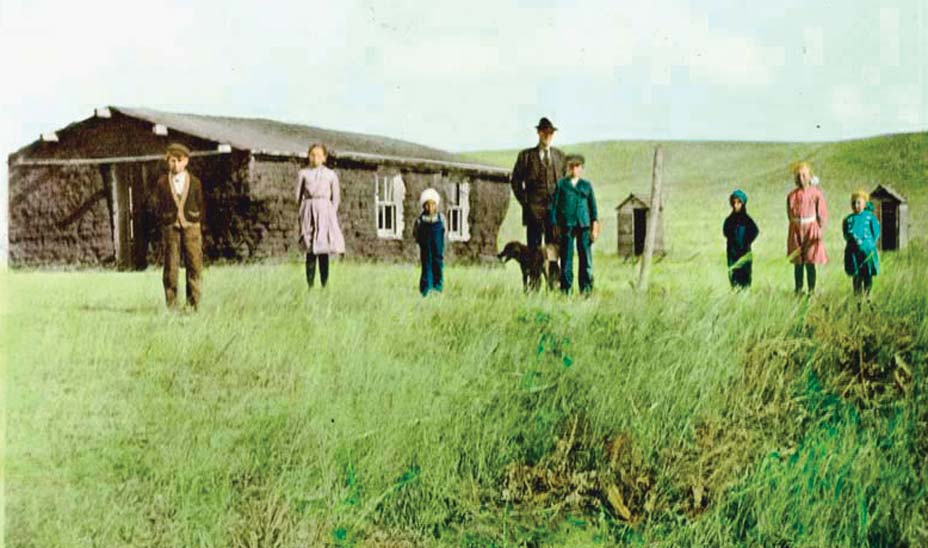 Figure 81. This early sod structure was used as a school. In the background are two outhouses, one for the boys and one for the girls. (Hultstrand Collection, Institute for Regional Studies, NDSU, 2028.006)

Every home had an outhouse,Outdoor toilet or outdoor toilet. A well-worn path led from the house to this nearby structure, which served the family summer and winter.