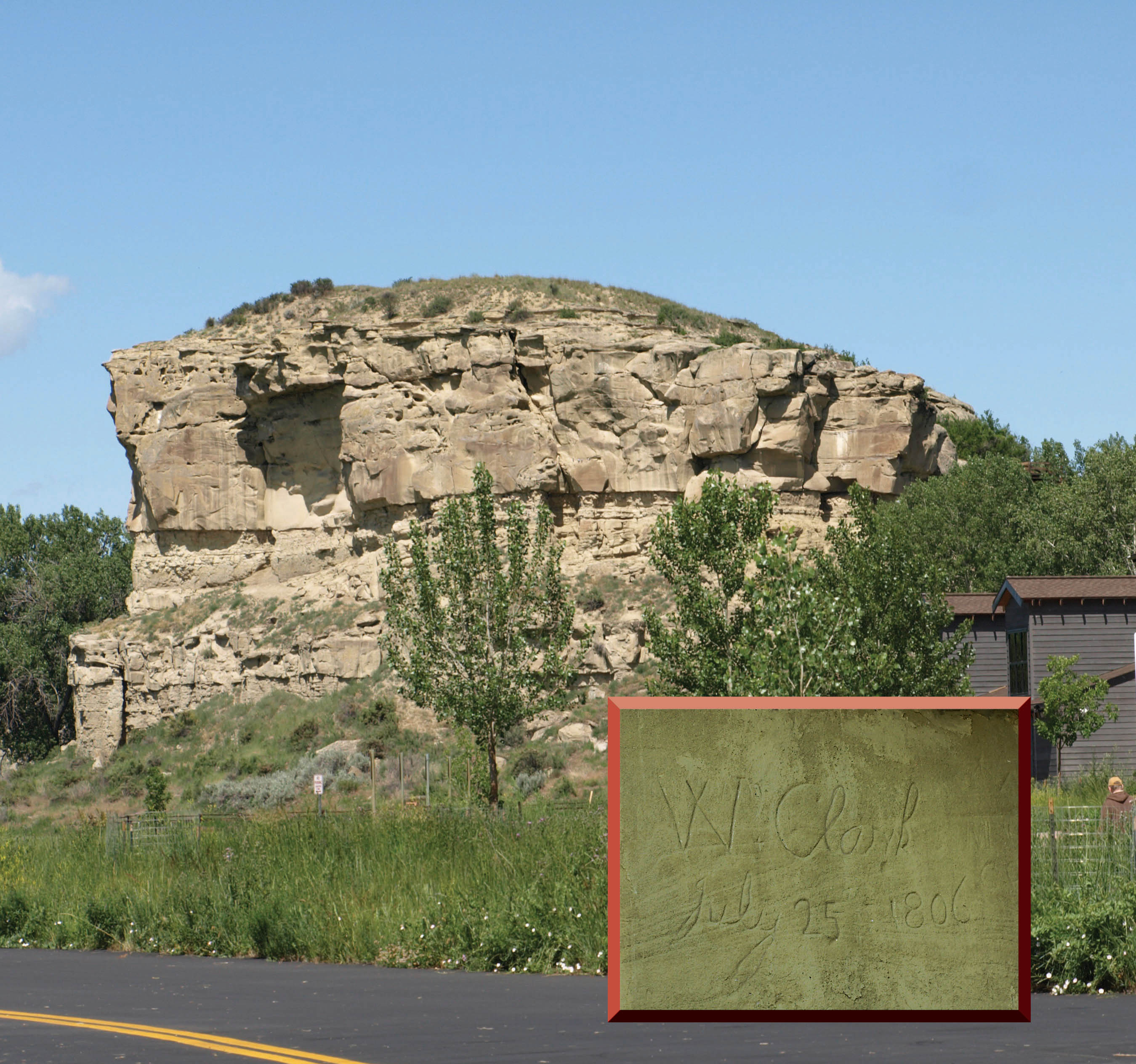 On August 17, 1806, the Corps of Discovery returned to the Mandan and Hidatsa villages on the Missouri and Knife Rivers. It was time to say goodbye to Sakakawea and little Pomp, who was now 1½ years old. During the trip, Clark had given Sakakawea the nickname “Janey.” He had also given Pomp a special honor.

Along the Yellowstone River, near present-day Billings, Montana, there is a rock pillar that rises 200 feet above the plain. Clark and his party stopped at this site, and Clark carved his name and the date, July 25, 1806, on the rock face. He named the natural pillar in honor of the youngest member of the expedition, calling it “Pompey’s Pillar.” Today, it is a National Monument where you can still see William Clark’s signature. Clark had grown so fond of Pomp that some years later, he raised Pomp as his own son.

Lewis and Clark realized that Sakakawea’s knowledge and courage during the expedition was important and helpful to the success of the journey. Her skill in finding food, making medicine, building shelters, making clothing, and using her many other abilities helped to save lives and make the journey a little less difficult. The explorers depended on her to interpret signs left by various tribes of Indians in different locations along their route.

If it had not been for Sakakawea, the expedition might have been attacked by Indians along the way who had never seen white men. The Indians were sometimes ready to defend themselves from these strange-looking people, but when they saw that a woman was traveling with the group, they knew that the men were peaceful. A war party does not travel with a woman and a baby.

The teenage Sakakawea had used her courage, strength, and abilities to help the expedition succeed. She became one of the most famous women in the history of the United States. Sakakawea has more memorials dedicated to her than any other woman in American history. She is pictured on a United States golden dollar coin, and several Navy ships have been named in her honor.

Figure 56. The Sakakawea golden dollar coin was issued by the United States Mint in 2000. (US Mint)

Today, the Hidatsa village where she lived is part of Knife River Indian Villages National Historic Site near Stanton. North Dakota has honored Sakakawea many times. An eight-foot-high bronze statue of Sakakawea is located on the North Dakota State Capitol grounds, and in 2003, a statue just like it was placed in the United States Capitol building in Washington, D.C. The largest lake in the state bears her name—Lake Sakakawea.

Is it Sakakawea (Suh-KAH-kah-wee-ah) or Sacagawea (Suh-kah-gah-WEE-ah)?  There are two spellings and two pronunciations for the same name of the same person.

North Dakotans pronounce and spell Sakakawea differently than do people in the rest of the United States.

The reason for the difference is important. The first person to write her name was William Clark. He wrote the name in his journal several times. Even though he was a bad speller, the real problem was that Shoshone Indians (her original people) and Hidatsa Indians (the people she lived with) did not have a written language. Clark had to spell the name as it sounded. He spelled it “Sah ca gar we a.”  Her husband, Charbonneau, told Clark that her name meant “Bird Woman.”

Russell Reid, a North Dakota historian, studied the name and decided it should be spelled and pronounced Sakakawea which is very close to the Hidatsa word for Bird Woman.  So, while the rest of the United States uses Sacagawea, in North Dakota we spell and pronounce her name Sakakawea.

Figure 57. Lake Sakakawea is a man-made lake in western North Dakota. It is named in honor of the famous woman on the Lewis and Clark Expedition. (ND State Water Commission)