The town of Plaza was founded in 1906. It lies in Mountrail County just a few miles north of the northern boundary of the Fort Berthold Reservation (See Image 4). 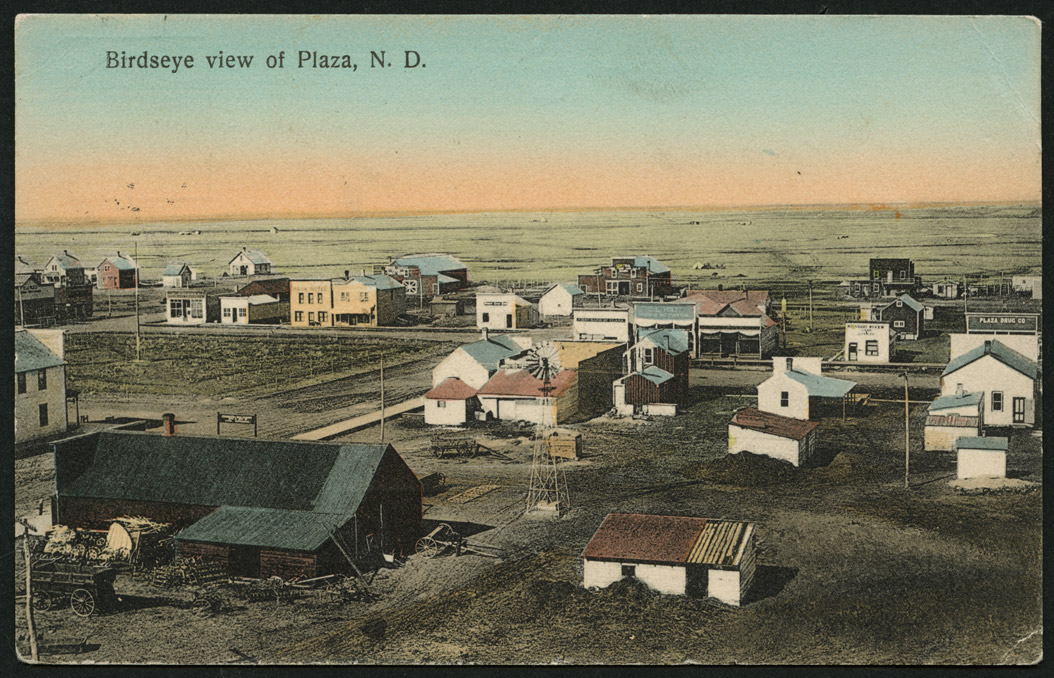 Image 4: The town of Plaza expected growth as soon as non-Indians began to settle on Fort Berthold lands on the east side of the Missouri River after 1910. SHSND 0193-051

The place that would become Plaza was a farm in 1905. In 1906, the Plaza Townsite Company bought a homestead for $3,000 (about 10 times what farm land sold for.)  On July 20, the townsite company sold lots to anyone who wanted to live in Plaza. The Soo Line Railroad owned land in the area and also sold lots that day. 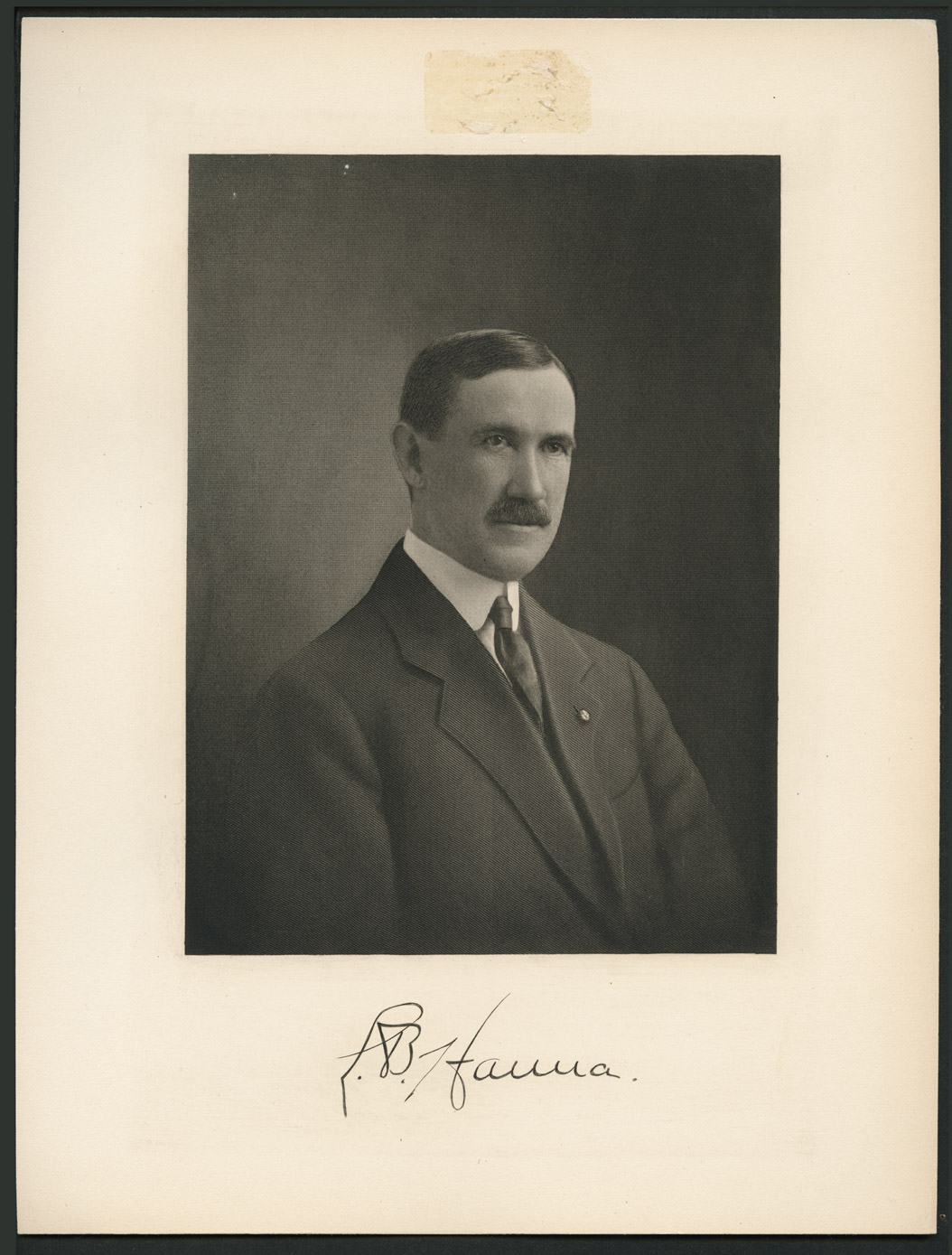 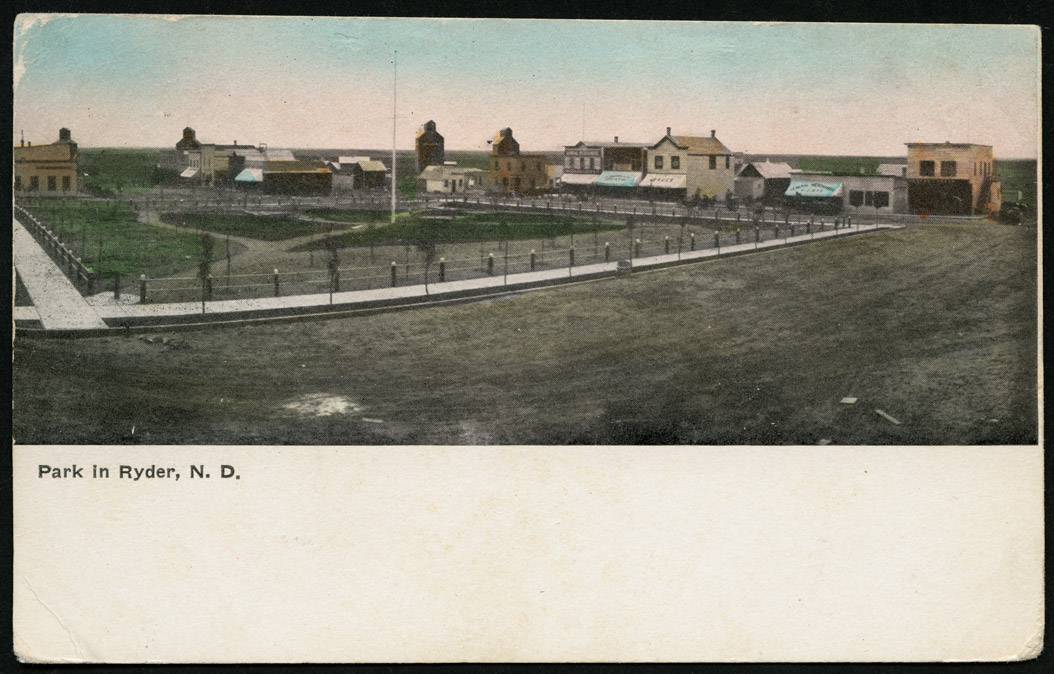 Image 6: The residents of Ryder assisted federal officials when they came to Fort Berthold to talk about opening the reservation to land sales in September 1909. Ryder was a prosperous little town that would grow with more land sales on the reservation. SHSND B0756-87

As Plaza grew, the businessmen of the town began to ask if they could purchase unallotted land on the Fort Berthold reservation. Several factors made their requests seem reasonable. First, the bison were gone, so the tribes did not need a lot of land for hunting. Second, once allotments were made, there were many thousands of acres within the reservation boundaries that had not been allotted. Third, the allotment law (the Dawes Act of 1887) protected allotments from sale, so Indian owners would not lose their lands. None of these factors took into account that the tribes occupied these lands by treaty.

Congressman Louis B. Hanna listened to their request and began the process of making the “surplus” land on the reservation available for non-Indians to purchase. (See Image 5)

As the people of Plaza (and other nearby towns) (See Image 6) campaigned for access to the reservation, Congressman Hanna’s support was important. Congressman Hanna was a member of the House of Representatives Committee on Indian Affairs. He had to win approval of the tribe to open the reservation lands to homesteaders. Hanna offered to double the size of the allotments that had already been made. Most of the allotments at Fort Berthold were for farm (or agricultural) land. Someone with a grazing allotment of 320 acres would have 640 acres under Congressman Hanna’s plan. Hanna also promised the Arikara, Hidatsa, and Mandan tribes $25,000 to establish a demonstration farm on the reservation.

The money paid to the tribes for the land was to be given to the U. S. Treasury in the name of the three tribes. Congress had control of the money to appropriate (or give away) for education, support, and “civilization” on the reservation.

Representative Hanna introduced a bill into Congress to approve of the sale of Fort Berthold lands. Secretary of Interior R. A. Ballinger gave “hearty approval” and “would be glad to see the bill become a law.”  The bill passed both houses of Congress and became law in 1910.

Why is this important?  In North Dakota land was considered a good investment. People who farmed wanted more land when crop prices were low. People who lived in cities wanted to buy land because they thought its value would increase over time. By 1910, there was little land left in North Dakota to be claimed under federal laws, so many non-Indians looked to reservations for an opportunity to purchase more land. The opening of the reservations to non-Indian land owners was a violation of the 19th century treaties, but Indian tribes did not have the power to resist the loss of their land to non-Indians.

Between 1906 and 1909 there was much talk about opening the unallotted trust lands on the Fort Berthold reservation to settlement. These documents help us understand the process and the ideas that non-Indians expressed about the land and the people of Fort Berthold. 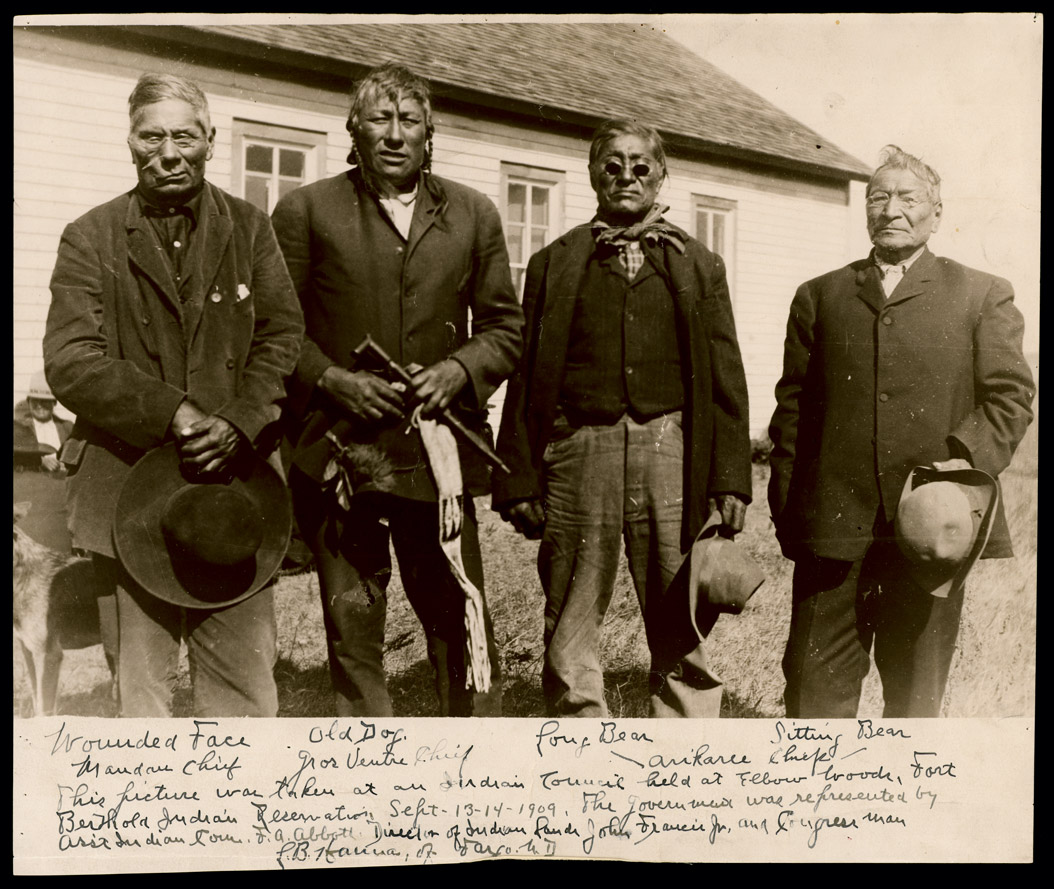 Image 7: These are some of the leaders who attended and spoke at the council with Congressman Hanna and Assistant Commissioner of Indian Affairs Abbott at Elbowoods, September 13, 1909. SHSND D0201-0001. 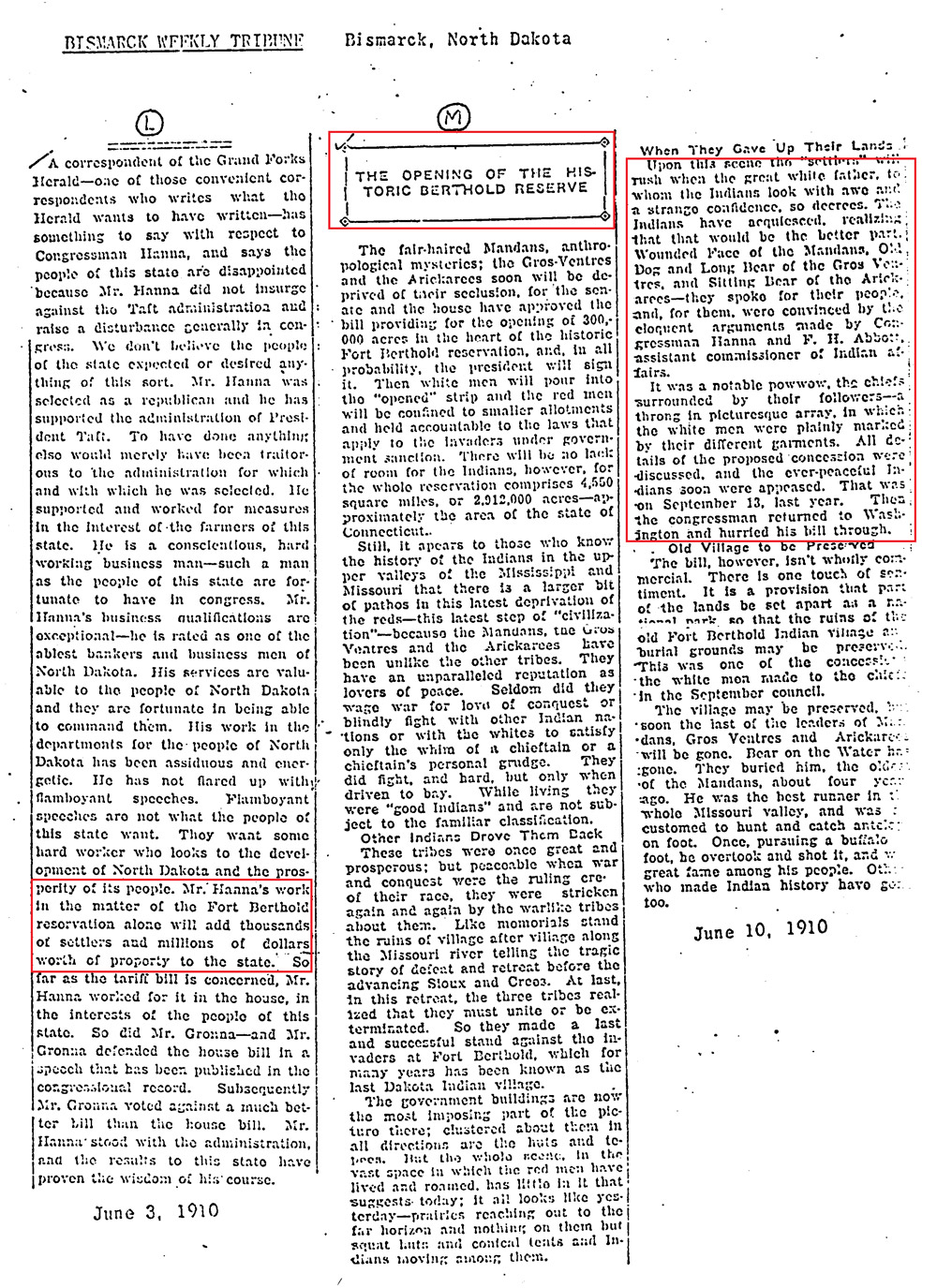 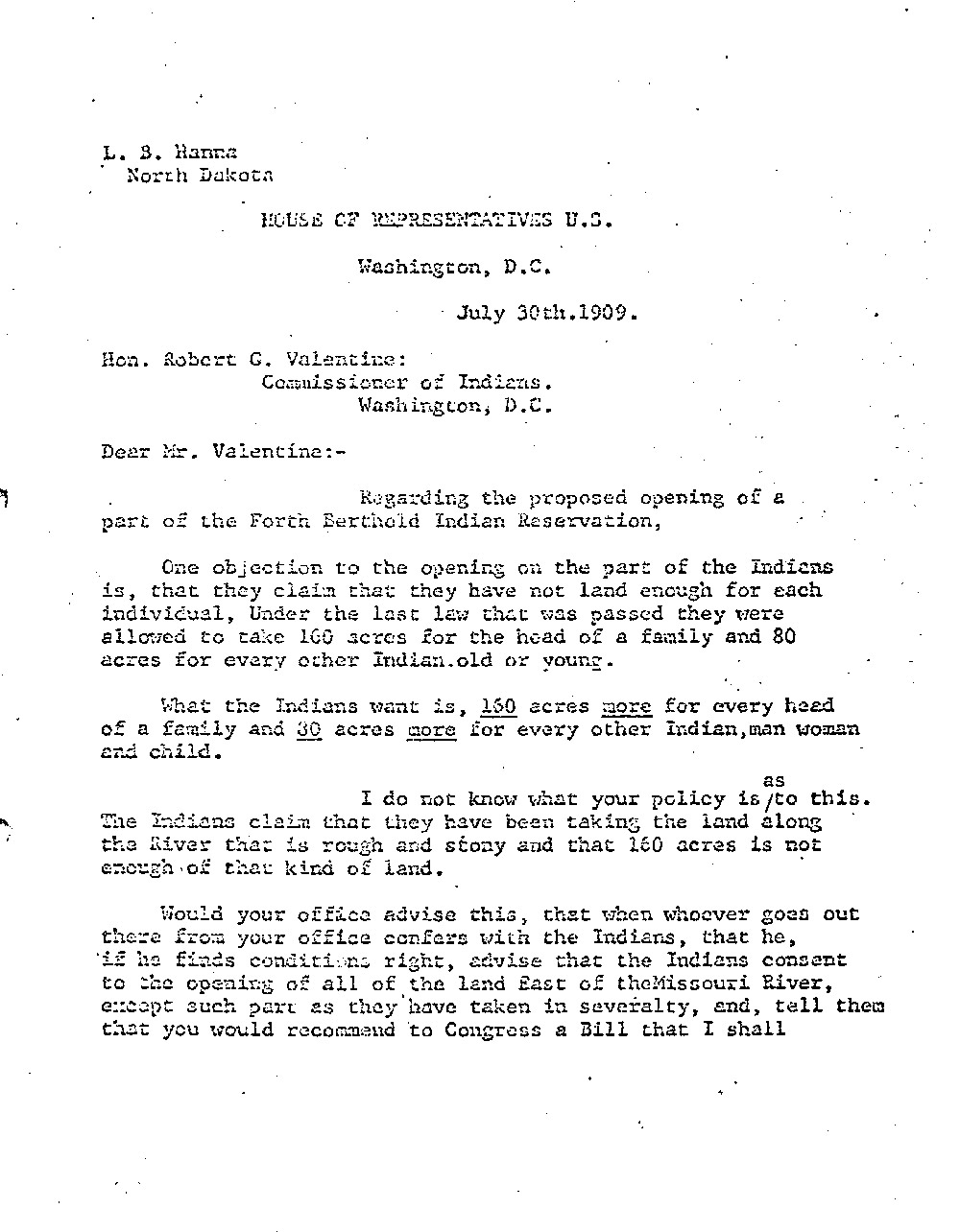 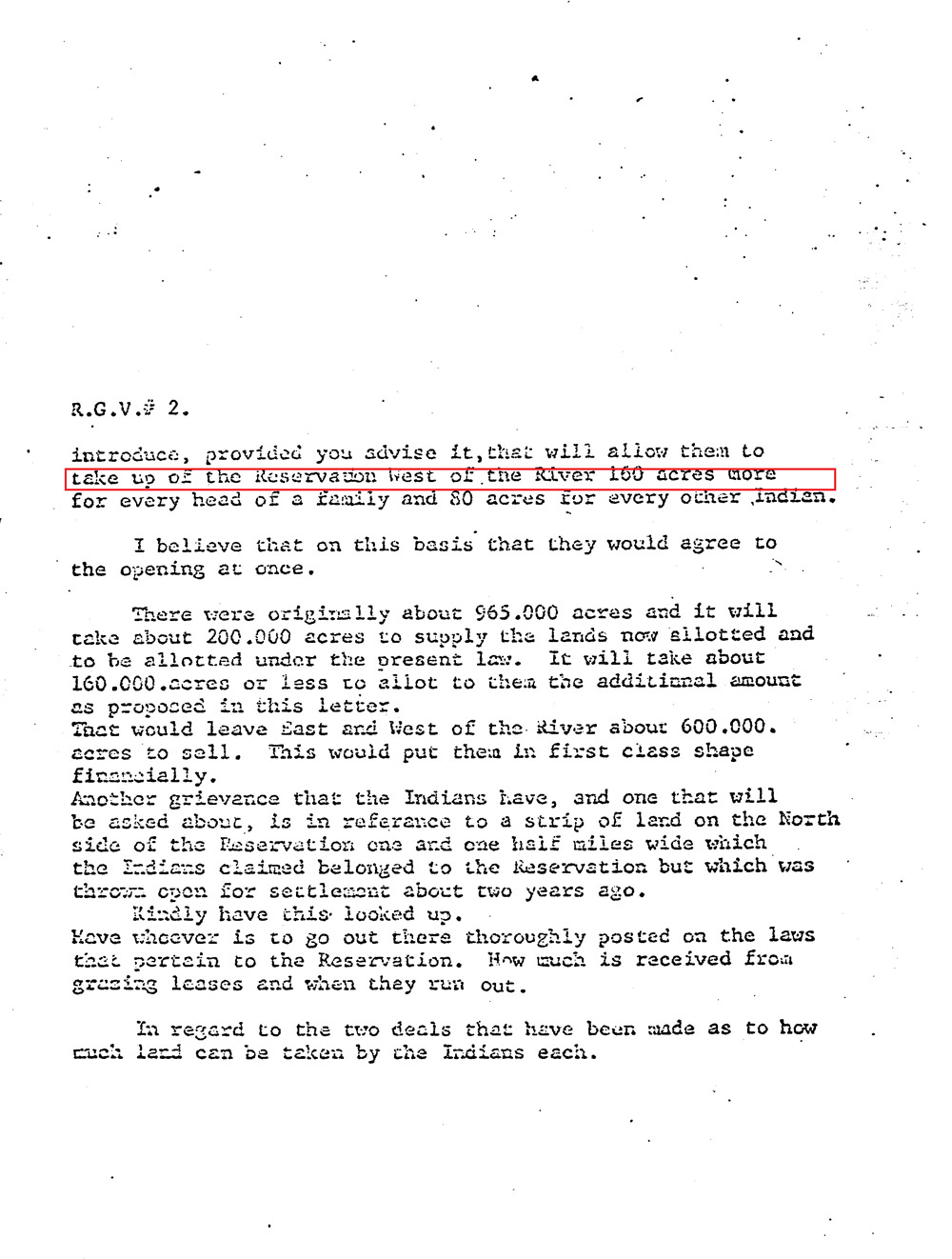 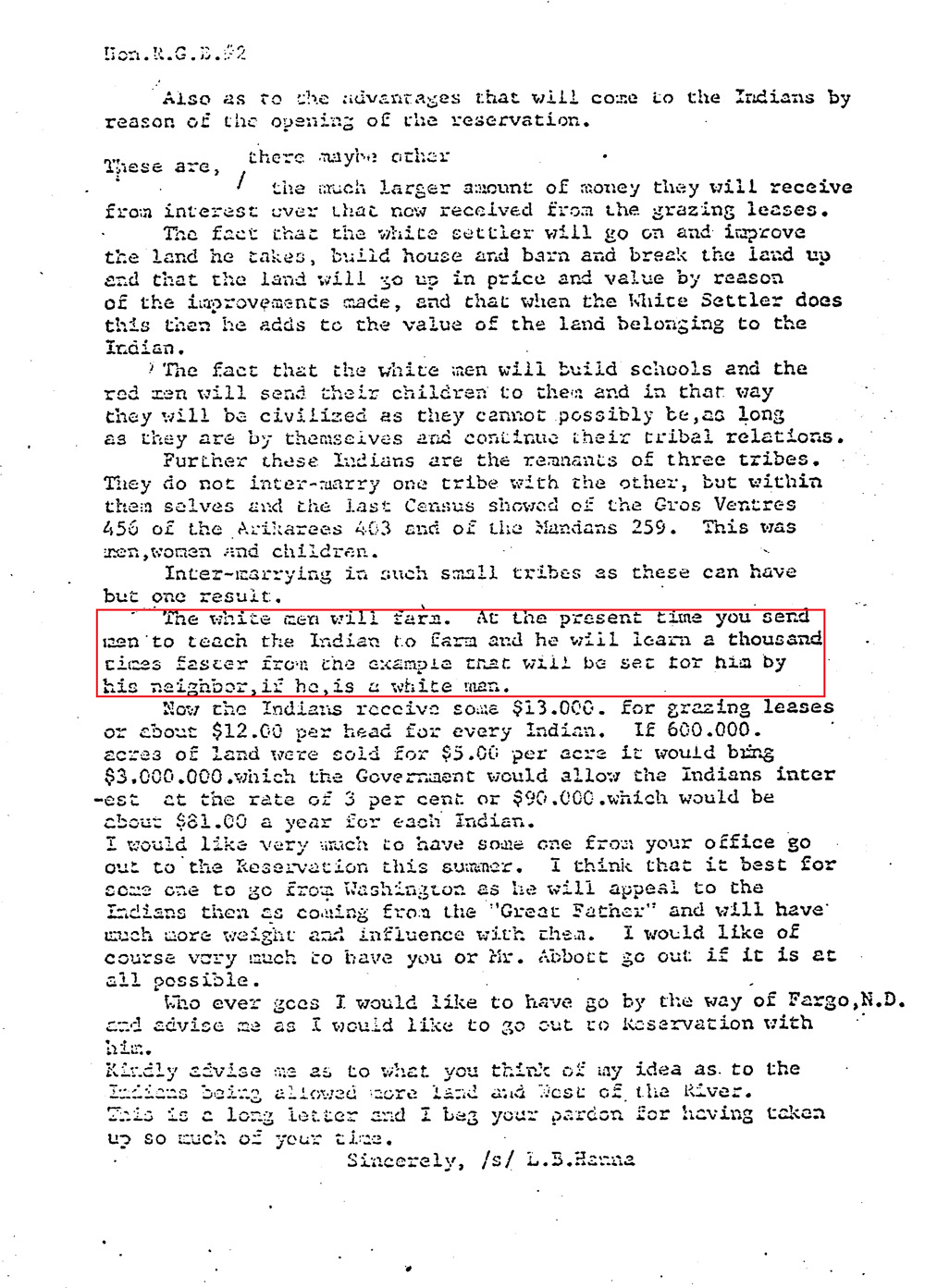 The residents of Fort Berthold Reservation asked to be included in the discussions. John Young, a special federal agent stationed at Fort Berthold wrote a cover letter introducing the petition signed by many leaders of the three tribes. Young supported the petition. (See Document 12) 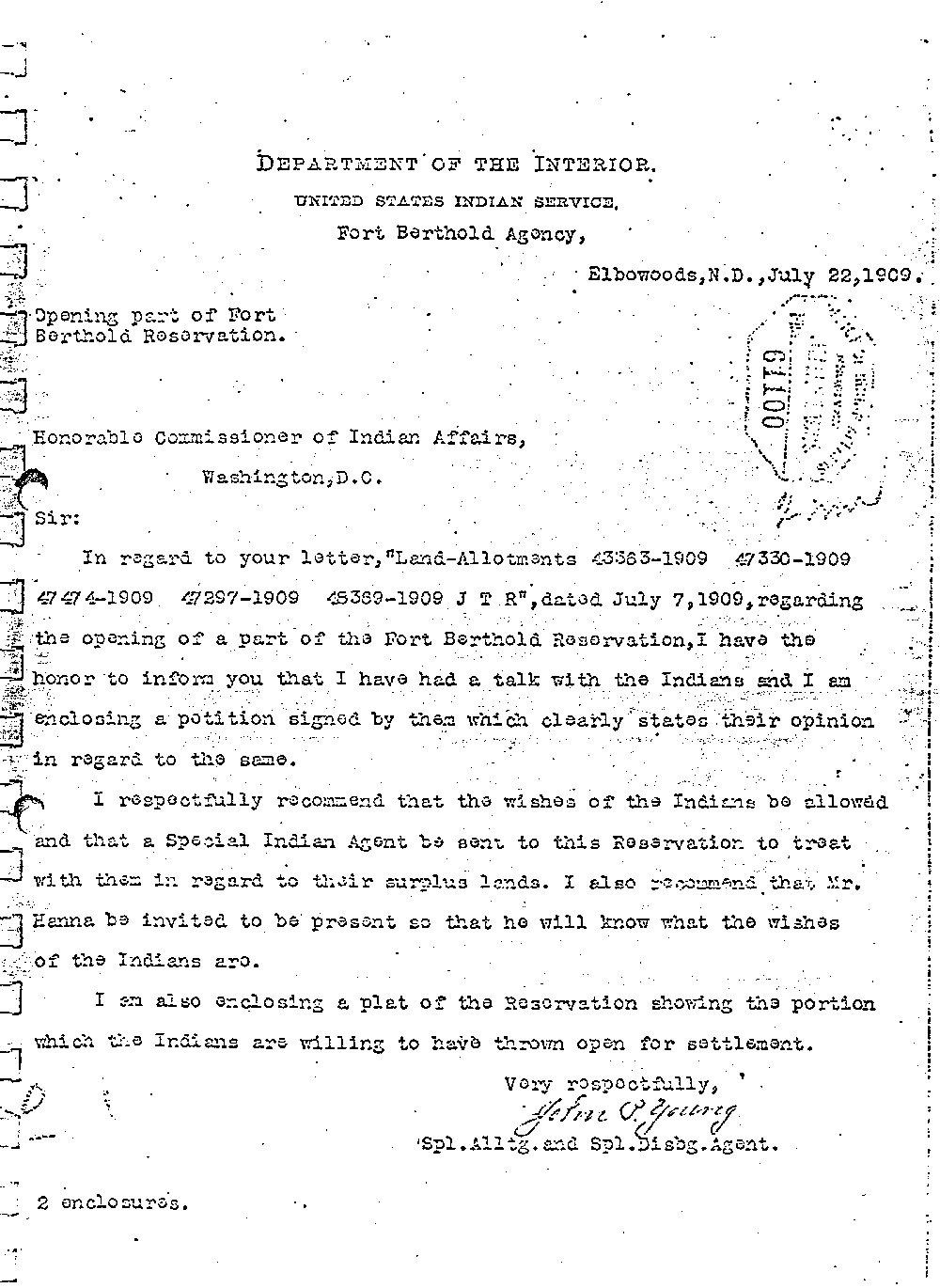 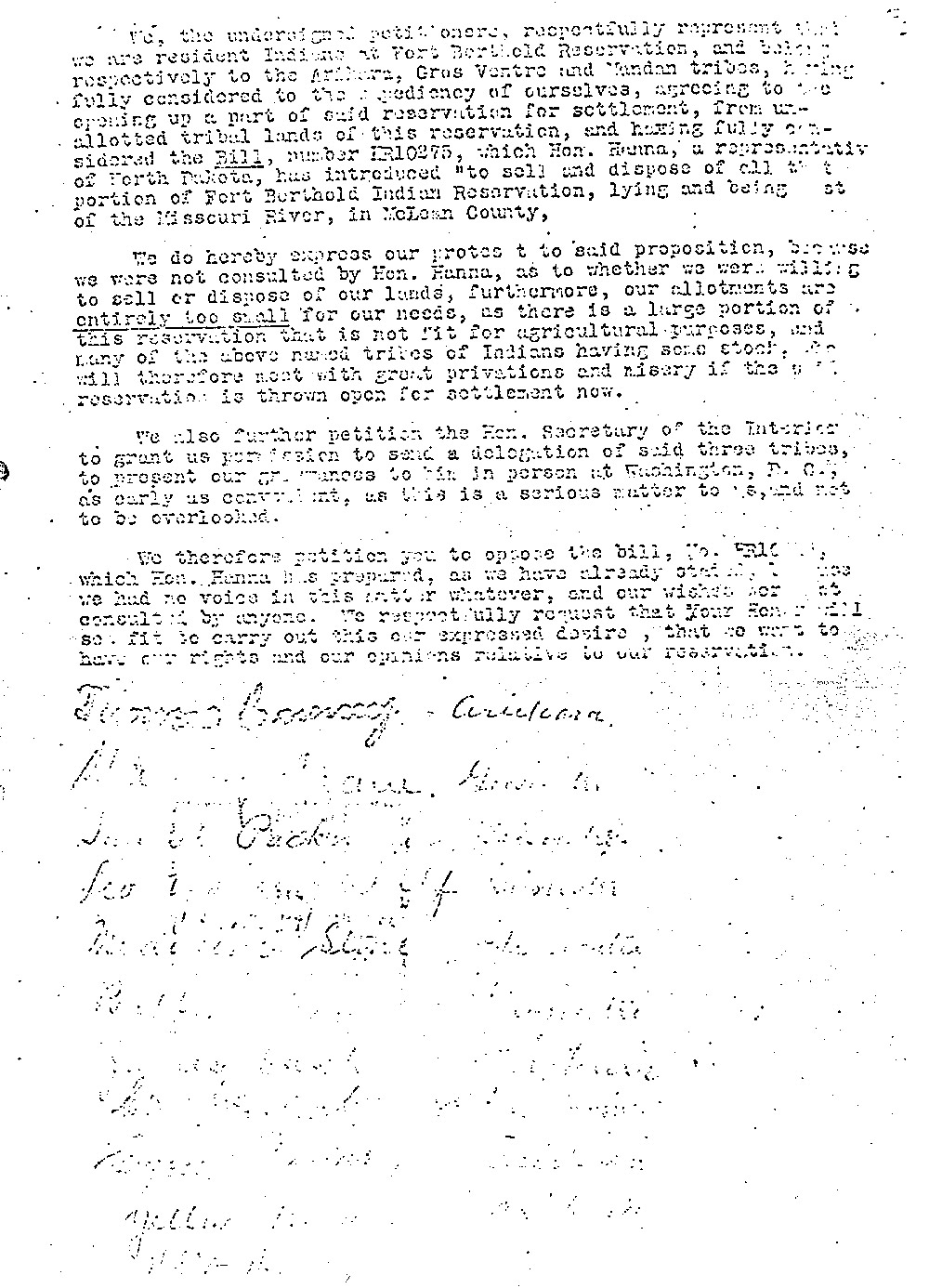 Louis B. Hanna was one of North Dakota’s representatives to Congress (and soon-to-be governor). Hanna believed that the reservation should be opened to non-Indian settlement, but wanted the Fort Berthold tribal members to be compensated with larger allotments. (See Document 13) Hanna met in council with the tribal leaders to discuss their demands. (See Image 7)

Newspapers across the state were carefully watching the events at Fort Berthold. When the official federal (not tribal) decision was made to open the reservation to non-Indian settlement, newspapers prepared their readers to “pour into the “opened strip.”  This article from the Bismarck Weekly Tribune, expresses some regret that the Mandans, Arikaras, and Hidatsas will lose land because they were “fair-haired” and peaceful. (See Document 14)

We, the undersigned petitioners, respectfully represent that we are resident Indians at Fort Berthold Reservation, and belong respectively to the Arikara, Gros Ventre and Mandan tribes having fully considered to the expediency of ourselves agreeing to the opening up a part of said reservation for settlement, from unallotted tribal land of the reservation, and having fully considered the Bill, number HR10275, which Hon. Hanna, a representative of North Dakota, has introduced “to sell and dispose of all that portion of Fort Berthold Indian Reservation, lying and being east of the Missouri River, in McLean County,

We do hereby express our protest to said proposition, because we were not consulted by Hon. Hanna, as to whether we were willing to sell or dispose of our lands, furthermore, our allotments are entirely too small for our needs, as there is a large portion of this reservation that is not fit for agricultural purposes, and will therefore meet with great privations and misery if the [unreadable word] reservation is thrown open for settlement now.

We also further petition the Hon. Secretary of the Interior to grant us permission to send a delegation of said three tribes, to present our grievances to him in person at Washington, D.C., as early as convenient, as this is a serious matter to us, and not to be overlooked.

We therefore petition you to oppose the bill, No. HR10275, which Hon. Hanna has prepared, as we have already stated, because we had no voice in this matter whatever, and our wishes were not consulted by anyone. We respectfully request that Your Honor will see fit to carry out this our expressed desire, that we want to have our rights and our opinions relative to our reservations. (See Image 7)

[Each man signed his name with his tribal affiliation. However, most signatures are not readable in this copy]