Several bands of Dakotas lived in Minnesota and Wisconsin during the early 19th century. Pressure from non-Indian settlers brought about a series of treaties that established the Dakotas along the Minnesota River in south-central Minnesota. By 1858, the Mdewakanton, Wahpekute, Sisseton, Wahpeton bands of Dakotas were living on reservations that were about 10 miles wide along the south side of the Minnesota River. Having ceded (given up) their lands in Wisconsin and elsewhere in Minnesota, the Dakotas were becoming dependent on annuities that the treaties guaranteed the tribe. Settlement around the reservation had reduced the wild game the Dakotas had hunted for hundreds of  years.

In 1862, warThe 1862 Dakota-U.S. War that took place in southern Minnesota was a bloody ordeal that led to the death or captivity of hundreds of non-Indians. Many Dakotas were captured, tried, and sentenced for their role in the war. Thirty-eight Dakotas were hanged for participating in the violent outbreak.
Read more about this war at http://usdakotawar.org broke out between the Dakotas and the Minnesota settlers in the region around New Ulm and Mankato, Minnesota. As a result of the war, approximately 4,000 Dakotas headed west into northern Dakota Territory. General H. H. Sibley and General Alfred Sully led troops into northern Dakota Territory in 1863 and 1864 to locate and punish the Dakotas who took part in the war. In early September, Sully attacked a hunting village of Dakotas at White Stone Hill. Those who survived this battle went north to Fort Garry (near Winnipeg, Manitoba.)  Eventually, many Dakotas moved south again to live and hunt near Mni Wakan (today known as Devils Lake.)  These Dakotas were mostly members of the Wahpeton and Sisseton bands.

In 1867, representatives of the Dakotas traveled to Washington, D.C. to negotiate a treaty. This treaty created a reservation in eastern Dakota Territory called the Sisseton Reservation. A second reservation  was established south of Devils LakeToday, the Devils Lake Reservation is known as the Spirit Lake Reservation. The words Spirit Lake are from the original Dakota name that was once interpreted into English as “Devils Lake.” The Dakotas referred to the lake as Mni Wakan, or Spirit Water. The people (“oyate”) who are enrolled with the Spirit Lake Nation are often called “Sioux,” but they call themselves Mni Wakan Oyate. for Sisseton and Wahpeton Dakotas and the Cut Head band of Yanktonai Dakotas. (Today this reservation is called Spirit Lake) The tribes claimed all the land between the two reservations. This land totaled about 8,000,000 acres. In 1872, the tribes agreed to give up their claim to this land.

Agency headquarters were built at Fort Totten, but no agent was assigned to the agency until 1870. The Dakotas expected annuities (food, clothing and other provisions) worth $80,000 each year for 10 years (See Document 22).

Document 22. Devils Lake Reservation was established in 1867. A reporter for the Jamestown Weekly Alert wrote this article about conditions on the Devils Lake Reservation in the summer of 1878. Though tribal members had been following the regulations and advice of the federal agent and the farmer-in-charge, their treaty annuities were slow to arrive. The supplies arrived by train in Jamestown and were transported by freight wagon to the reservation. The newspaper reporter who wrote this article uses long sentences and paragraphs. Try to read through his mis-use of language and find the meaning in this article.

We are glad to notice the fact Devil’s Lake Indian supplies are beginning to arrive for the agency at Fort Totten, one carload of flour having arrived last week, and this week two carloads of pork also arrived and are not waiting transportation to that agency. The invoices are now here showing the shipment of sugar, coffee, soap and tobacco from Louis Booth, New York City, for these bands of Indians.

The supplies at Fort Totten were exhausted on July 20, and the Indians have been without their usual supplies at the season in which they need them, their last year’s crop having been consumed and the new crops not being available, together with their not being allowed to hunt off of their reservation for nearly a month. The Indians, had they not earned considerable in the way of teaming for freighting contractors, would have been in straits for food, thereby being discouraged on these endeavors to adapt the customs civilization in which they are progressing as rapidly as Indian of any agency in the Northwest. The government should so make its arrangements that the issuing of rations should be continuous, at least not allowing the break to come in the season between crops when the Indians are most destitute; especially as the instructions of the Indian Department do not allow the repayment of the supplies thus omitted, but hold the agents to the rule that no omission of rations or supplies are to be made up, but that the Indians are to lose them, thus preventing the wards of the government from borrowing  food on the strength of repaying a loan of food obtained when the supplies should arrive. This makes at such times the life of an honest Indian agent a burden to him, and causes him to wish himself a badger or a gopher so that he could hide himself in some convenient hole and get away from the importunities for food of an as yet ignorant race, who cannot understand why matters and things are so contrived, and whose suspicions of ill treatment are egged on by dissatisfied and hostile men of their own race, who would gladly [encourage] them to abandon their acquired habits of industry, and once more take to their former roving life on the prairies.

Major McLaughlin kept four teams waiting nearly a week for the flour, and stated that he would keep them at Jamestown the whole fall before he would permit them to return without it, as men are so constituted that they can wait with some patience if there be hope ahead, and as the Indian possesses this quality in common with those of whiter skin it was better to let them stay hungry with hope to sustain them than to bear the situation with a manifest uncertainty before them.

Few Dakotas lived on the reservation at first, but by 1870 many Dakotas had moved there to live and to take advantage of their treaty rights (See Image 14).

Image 14: This is typical house for employees on the Devils Lake reservation in 1884. It is a duplex that houses two families. Mr. and Mrs. Grant (right) live on one side. Mr. Grant was an interpreter for the agency. Mrs. Grant is a Dakota woman. The other family (left) is the Beesaws. Mr. Beesaw was also an employee of the federal agency at Devils Lake Reservation. SHSND 0420-020.

According to the treaty, any adult among the Dakota residents could receive five acres of land to live on and cultivate. At the end of five years, the individual would receive title to 40 acres. Those who accepted more land to cultivate could eventually acquire as much as 160 acres of land, if he or she were successful in raising crops. In 1877, all Dakotas living at Devils Lake reservation who were under the age of 21 were to receive title to 40 acres (See Document 23). This arrangement was made 10 years before the Dawes Act of 1887.

Document 23. This excerpt is from an article printed in the Jamestown Weekly Alert. On March 13, 1879, the reporter for the newspaper traveled to Fort Totten, where he visited the military post and the Indian reservation. The residents of Devils Lake Reservation had not only taken up farming, but had added bread to their diet. The agent, Major James McLaughlin, manipulated annuity distributions to change the culture of the Devils Lake residents.

The newspaper article included these paragraphs:

The Indians are building themselves good, comfortable log houses. The only aid they receive from the agency carpenters, two of them being Indians, is to have the doors, door frames, and casings made for them. They are putting in larger pieces of land every year some of them having last fall both wheat and potatoes for sale, over and above their own needs. Government has authorized Major McLaughlin to expend sufficient from the annuities to build a run of wheat burrs [grinding stones] and bolting machinery so that the Indians can shortly grow their own [wheat for] bread stuffs, and to spare.

Major McLaughlin is endeavoring to break down the chieftain feature among [these] Indians, allowing chiefs no greater allowances, or favors than the other Indians, which policy is eminently that of our country where no matter what his birth, if talen[t], education and circumstances befriend a man may rise from the lowest to the highest position within the gift of the people

The annuities for these Indians will soon run out, when it is to be hoped that they will have been so far advanced in the scale of civilization that they may be able to stand alone as American citizens, and not be forced to lean in any way longer on the government as a prop for a falling people. 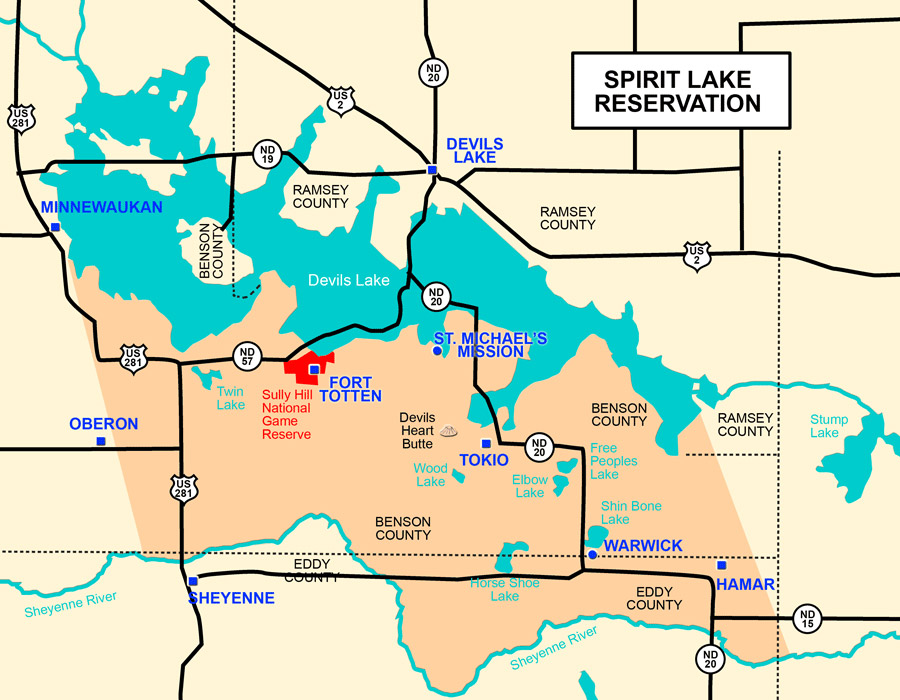 Map 10: The Devils Lake (Spirit Lake) Indian Reservation The tan area in this map represents the present day Spirit Lake Reservation, or as it was called until the late 20th century, the Devils Lake Reservation. It consists of almost 231,000 acres. Of this acreage, the tribe owns 473 acres. Individual members of the tribe own 50,230 acres. The federal government owns 1,800 acres. Non-Indians own 178,497 acres. The actual acreages change over time as people buy and sell land, but the figures can be used to show how ownership of reservation lands has been divided up. Devils Lake Sioux Tribe Fact Sheet, September, 1967

The Treaty of 1867 gave the president the power to open reservation lands to settlement. Non-Indians were eager to take land on the reservation, and some members of the Turtle Mountain Band of Chippewa were given a place on the Devils Lake Reservation (See Map 10). 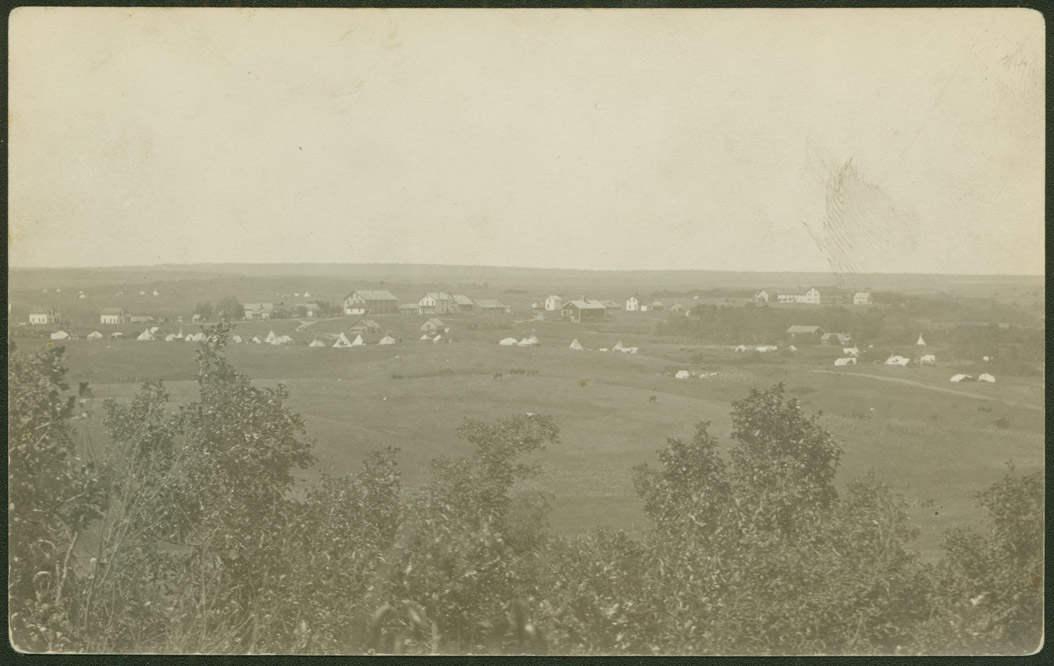 Image 15: The Devils Lake Reservation was centered on an army post, Fort Totten. Shortly after the post was built, the Catholic Church built a school for reservation children. This photo shows the Army post, the school, and the tipis of several families that have come to Fort Totten on business or to visit their children at school. SHSND 0420-008.

The Army abandoned Fort Totten in 1890, and the buildings were turned over to the agency to be used for education (See Image 15).