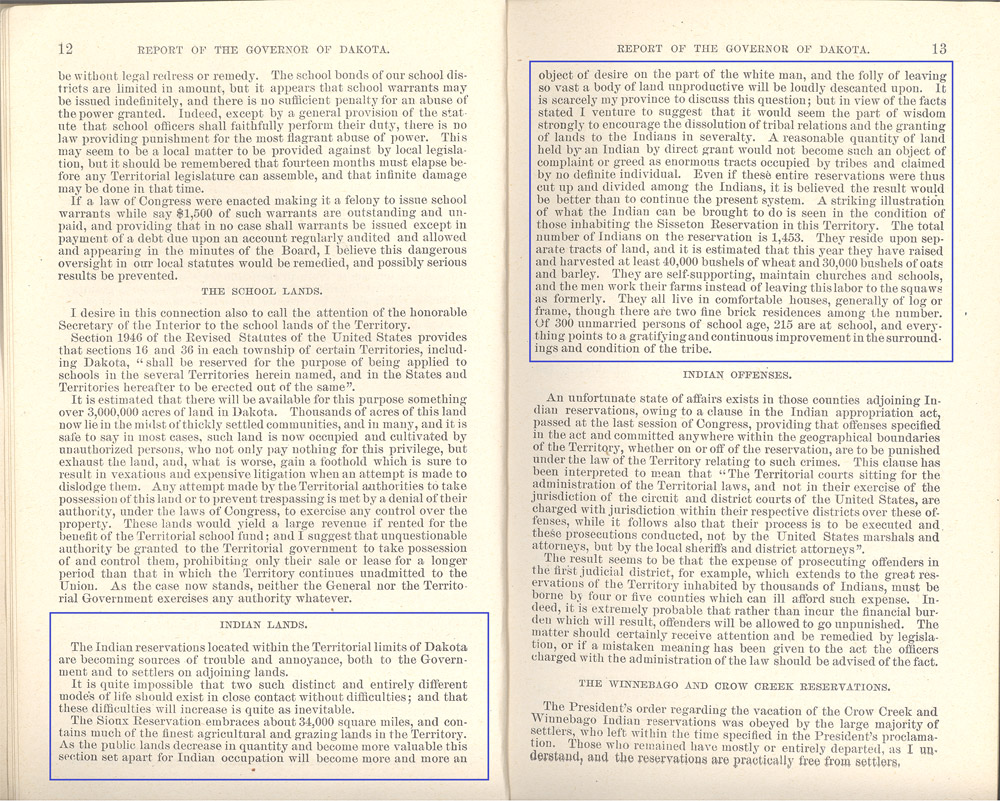 Document 3: Governor Gilbert Pierce of Dakota Territory was among those demanding reforms and access to Indian reservations as he stated in his report of 1885. Territory of Dakota Governor’s Report, 1885.

The reservation period on the northern Great Plains started in 1851 with the Treaty of Fort Laramie. Thirty years later, federal officials, military officers, and Christian organizations dedicated to the welfare of American Indians believed that a change in federal Indian policy was needed. Non-Indians pressured Congress to make some reservation lands open to settlement. (See Document 3)

In 1887, Congress passed the Dawes Act. The Dawes Act called for allotment (also called severalty) of reservation lands. Allotment meant that the land was to be divided up and given to individuals of the tribe. The Dawes Act was similar to the Homestead Act in that it encouraged Indians to own and farm approximately 160 acres of land. Many tribes tried to refuse allotment. Tribal traditions did not include private ownership of land. However, the law declared that if the United States President decided that a reservation would be allotted, the tribes had little legal power to resist. Individuals could choose their own parcel. If they refused to do so, then the reservation agent chose for him or her.

The Indians who received allotments did not have to pay for the land. They were expected to live on the land and make it productive through ranching or farming. However, they did not receive title to the land for 25 years because the government considered Indians to be unable to look after business matters. After 25 years, ownership title passed to the Indians. Many Indians, however, did not have enough money to pay property taxes on the land when they gained title to the land.

The Dawes Act made it possible for Indians who had an allotment to become a U.S. citizen. If the land owner then “adopted the habits of civilization and settled on the allotted land, he or she could become a citizen. Citizenship meant certain privileges such as voting, but it also meant responsibility such as paying taxes. When the landowner got title to the land, he or she could sell it, lease it, or borrow money using the land for collateral. Many Indians sold their land because they were poor and needed the money. If they kept their land, but could not pay taxes on it, they would lose the land to the state. When Indians lost their allotments, it was possible for non-Indians to buy the land, thereby breaking up the Indian community.

After reservations were allotted, there were many thousands of acres within the boundaries of the reservations that were available to non-Indian settlers. The federal government reserved some of these lands for the tribe (trust lands.)   Land claimed by settlers remained within reservation boundaries, but was not controlled by the tribe (See Document 5).

Document 4. The debate over how to manage Indian lands and how to help Indians adapt to a new way of life generated discussion across the United States. These excerpts are taken from some of the main arguments of the 1880s.

Before the Dawes Act

Farmers, ranchers, and politicians pestered the President of the United States and Congress about reducing the size of Indian reservations for several years before the 1887 law was passed. Governor Gilbert Pierce of Dakota Territory requested allotment in his 1885 report to the Secretary of the Interior. Governor Pierce believed that allotment would reduce the size of reservations, open reservation lands to non-Indian settlers, and satisfy the need for more public land.

Support for the Dawes Act

Senator Henry Dawes (1816 – 1903), a Republican from Massachusetts (1875 -1893), sponsored the legislation which became the Dawes Act in 1887. His bill generated a lot of debate about federal Indian policy. The United States had followed many different policies in the 19th century. None of the policies had improved relationships between the federal government and the tribes or between the tribes and the European American population of the United States. After most tribes had been assigned to a reservation, federal policy turned toward changing the ways that Indians lived, the language they spoke, and their religious practices. Here is what Senator Henry Dawes said to people who gathered at Lake Mohonk, New York in 1885 to discuss what many Americans called the “Indian problem.”

“They [Indians] have not got as far as they can go, because they own their land in common. . . . there is no enterprise to make your home any better than that of your neighbors. There is no selfishness, which is at the bottom of civilization. Till this people will consent to give up their lands, and divide them [the lands] among their citizens so that each can own the land he cultivates, they will not make much more progress.”

On another occasion, Dawes stated that “civilized people”

Many reformers who were concerned about the condition of American Indians agreed with Senator Dawes. Alice Fletcher (1838 – 1923) was an archaeologist and anthropologist and an influential reformer. She studied allotment for the federal government. After the Dawes Act was passed in 1887, she went to Lapwai, Idaho to organize the Nez Perce tribe for allotment. The Nez Perce, under the leadership of their great chief, Joseph, put up strong resistance to allotment. Fletcher, however, continued to believe that allotment of tribal lands was in the best interest of the Indians. Of the Dawes Act, she wrote:

"The Indian may now become a free man; free from the thralldom of the tribe; freed from the domination of the reservation system; free to enter into the body of our citizens. This bill may therefore be considered as the Magna Carta of the Indians of our country."

Opposition to the Dawes Act

Many important people opposed the Dawes Act. Senator Henry M. Teller (Republican from Colorado) vigorously opposed the Dawes Act. Between 1882 and 1885, Teller had served as Secretary of the Interior where he supervised the Office of Indian Affairs. He had better knowledge of the situation of American Indian tribes than did most people. Senator Teller tried, unsuccessfully, to change the Republican Party policy on Indian Affairs. He served in the Senate from 1876 to 1882 and from 1885 to 1909. In 1881, when allotment was being studied, he said that the policy would “despoil the Indians of their lands and to make them vagabonds on the face of the earth.”  Teller declared that

"the real aim [of allotment] was to get at the Indian lands and open them up to settlement. The provisions for the apparent benefit of the Indians are but the pretext to get at his [the Indians’] lands and occupy them... If this were done in the name of Greed, it would be bad enough; but to do it in the name of Humanity... is infinitely worse."

A few years after the Dawes Act was passed, General Nelson A. Miles (1825 – 1923) expressed his opposition to the Dawes Act in a telegram addressed to Senator Dawes. Miles was an Army officer who had fought in the Civil War, had forced the Lakotas onto a reservation, had led the Army against Chief Joseph of the Nez Perce, and captured the Chiricahua Apache leader, Geronimo. Like many officers, Miles believed that the Army, not Congress, should be in charge of Indian policy. However, he also believed that the Dawes Act would only lead to greater poverty and problems on reservations. Part of the problem was that the federal government had failed to live up to its promises. Miles wrote:

“First. The forcing process of attempting to make large bodies of Indians self-sustaining when the government was cutting down their rations and their crops almost a failure, is one cause of the difficulty.

Second. While the Indians were urged and almost forced to sign a treaty presented to them by the commission authorized by Congress, in which they gave up a valuable portion of their reservation which is now occupied by white people, the government has failed to fulfill its part of the compact, and instead of an increase or even a reasonable supply for their support, they have been compelled to live on half and two-thirds rations, and received nothing for the surrender of their lands, neither has the government given any positive assurance that they intend to do any differently with them in the future.

Congress has been in session several weeks and could, if it were disposed, in a few hours confirm the treaties that its commissioners have made with these Indians and appropriate the necessary funds for its fulfillment, and thereby give an earnest of their good faith or intention to fulfill their part of the compact. Such action, in my judgment, is essential to restore confidence with the Indians and give peace and protection to the settlements. If this be done, and the President authorized to place the turbulent and dangerous tribes of Indians under the control of the military, Congress need not enter into details, but can safely trust the military authorities to subjugate and govern, and in the near future make self-sustaining, any or all of the Indian tribes of this country.”

Fort Berthold. Fort Berthold was approved for allotment in 1894. However, after each qualified individual received his or her allotment, the remaining land was held in trust for the tribe by the federal government. In 1910, Congress passed a law providing for sale of the “surplus” lands to non-Indians.

Standing Rock Reservation. Standing Rock was approved for allotment when it was created from the Great Sioux Reservation in 1889. Allotment began in 1906 on the grazing standard (320 acres to the head of a household.)  Surplus lands were opened to settlement in 1908.

Fort Totten (today this is Spirit Lake Reservation). The reservation was established in 1867, but settlers had already claimed 64,000 acres on the reservation. The tribe was paid for the loss of that land. In 1887, the tribe was approved for allotment. One hundred thousand acres were opened to settlement by non-Indians.

The Dawes Act was successful in breaking up tribal relationships and developing the idea that land was to be used communally. The Dawes Act  led to a new culture among American Indians that had many of the qualities of the Anglo-American society surrounding the reservations. In 1920, several years after the last allotments were made, Judge Aaron McGaffey Beede of Fort Yates, testified before the North Dakota Supreme Court. He said that he was familiar with many Lakotas and Yanktonais and...

...that these Indians live the same as white people. They are law abiding, do not live in tribes under chiefs; that they marry under the civil laws of the state the same as whites, and that they are Christians. That they have severed their tribal relations and adopted civilized life for a period dating back at least twenty years.

Why is this important?  The Dawes Act reveals that many Congressmen believed that Indians were childish and incompetent. They believed that only those who embraced the culture of the United States were truly civilized people. Congressmen and others who supported the Dawes Act thought that the most important step in changing the culture of American Indians was to encourage them to own land individually.

The Dawes Act did not achieve all of its goals. The land parcels were too small for successful farming and ranching. Many Indians were cheated out of their land. Even if they kept the land for 25 years and then received title, they often could not pay the taxes.

The loss of land after allotment contributed to the poverty of American Indians. When American Indians began to live on separate farms instead of in a community or village as they had done for thousands of years, they lost some of their traditions.