The Chippewas had been in conflict with the Dakotas over hunting territory for many years before 1858. However, in 1858, the two tribes met in council to renew an earlier agreement about territory. With assistance from United States negotiators, the two tribes agreed to the Sweet Corn Treaty which divided the territory between them. According to the Sweet Corn Treaty, Chippewa territory began in northwestern Minnesota, included much of the Red River Valley north of present-day Fargo, and continued west to the Missouri River. The Chippewa lands included about 11,000,000 acres. The Dakotas and Chippewas agreed to respect each other’s territory while allowing hunting on the other’s land if necessary. The Sweet Corn Treaty was respected as a historic foundation for land claims in the years after 1858.

Document 27. The agreement between the Chippewas and the Dakotas was written down on behalf of the Dakotas by an English speaking agent of the U.S. government in 1858. The clerk used the older spellings of Dacotah and Chippeways. The names of some of the rivers have changed, but other locations in present-day North Dakota have not changed at all. Maison du Chien is now called Dog Den Butte (Butte Township in northwestern McLean County.) However, it is difficult today to know exactly how far the sound of a gunshot traveled in 1858. The Chippewas used this treaty to identify the extent of their traditional lands when dealing with the federal government on land cessions in the 1890s.

We Ojoupay (Sweet Corn) son of Ojoupay second chief of the Sissseton and Yankton tribes of Dacotahs; and Wahnahtah (he who rushes on) son of Wahnahtah first chief of the Sisseton and Yankton tribes of Dacotahs; do hereby declare that we intend to abide by the Articles of the treaty entered into by our fathers represented by Chief Emay das kah (flat mouth) at Priaire du Chien about thirty three years ago by which treaty the boundary line dividing the lands of the two nations (the Chippeways and Dacotahs) was established and agreed upon.

We furthermore declare that it is within our recollection that after the above treaty was agreed upon the boundary line has ever been known by us and our people to have been as follows:

Commencing at the mouth of the river Wahtab, thence ascending its course and running through Lake Wahtab: from thence taking a westerly course and passing through the fork of the Sauk River: thence running in a northerly direction through Otter Tail Lake and striking the Red River at the mouth of Buffalo River: thence following the course of the Red River down to the mouth of Goose River: thence ascending the course of Goose River up to its source: after leaving the Lake, continuing its western course to Maison du Chien: from thence taking a northwesterly direction to its terminus at a point on the Missouri River within gunshot sound of Little Knife River. 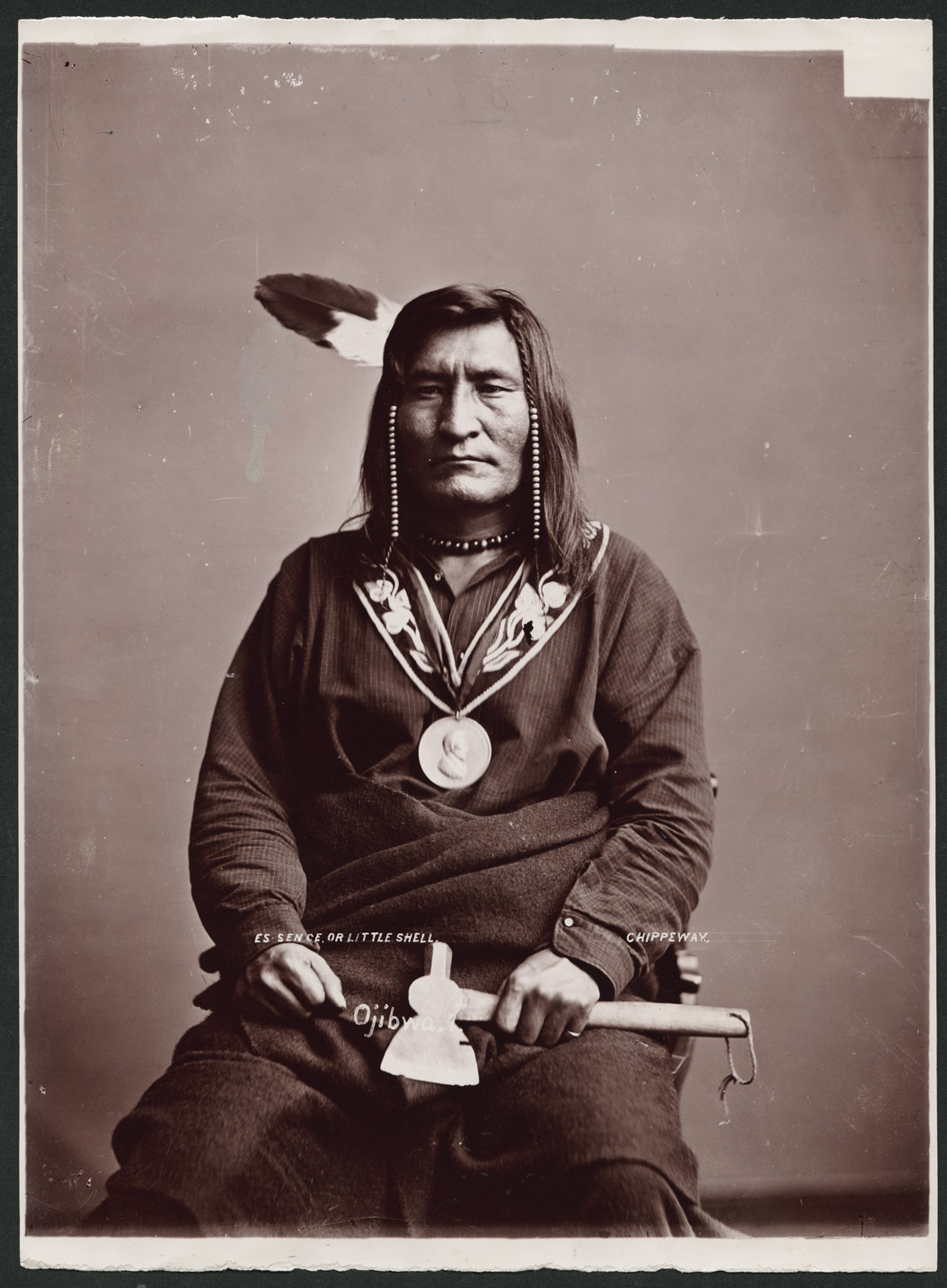 Image 18: Little Shell III led the protest against the 1892 McCumber Agreement. Little Shell hired attorney Pierre Bottineau to help his band challenge the legality of the proceedings, but the federal agent for Turtle Mountain appointed a council without consent of the tribe. This council agreed to accept the “Ten-cent Treaty” and the exclusion of Little Shell and his band. Little Shell’s group moved to northern Montana. SHSND B0307 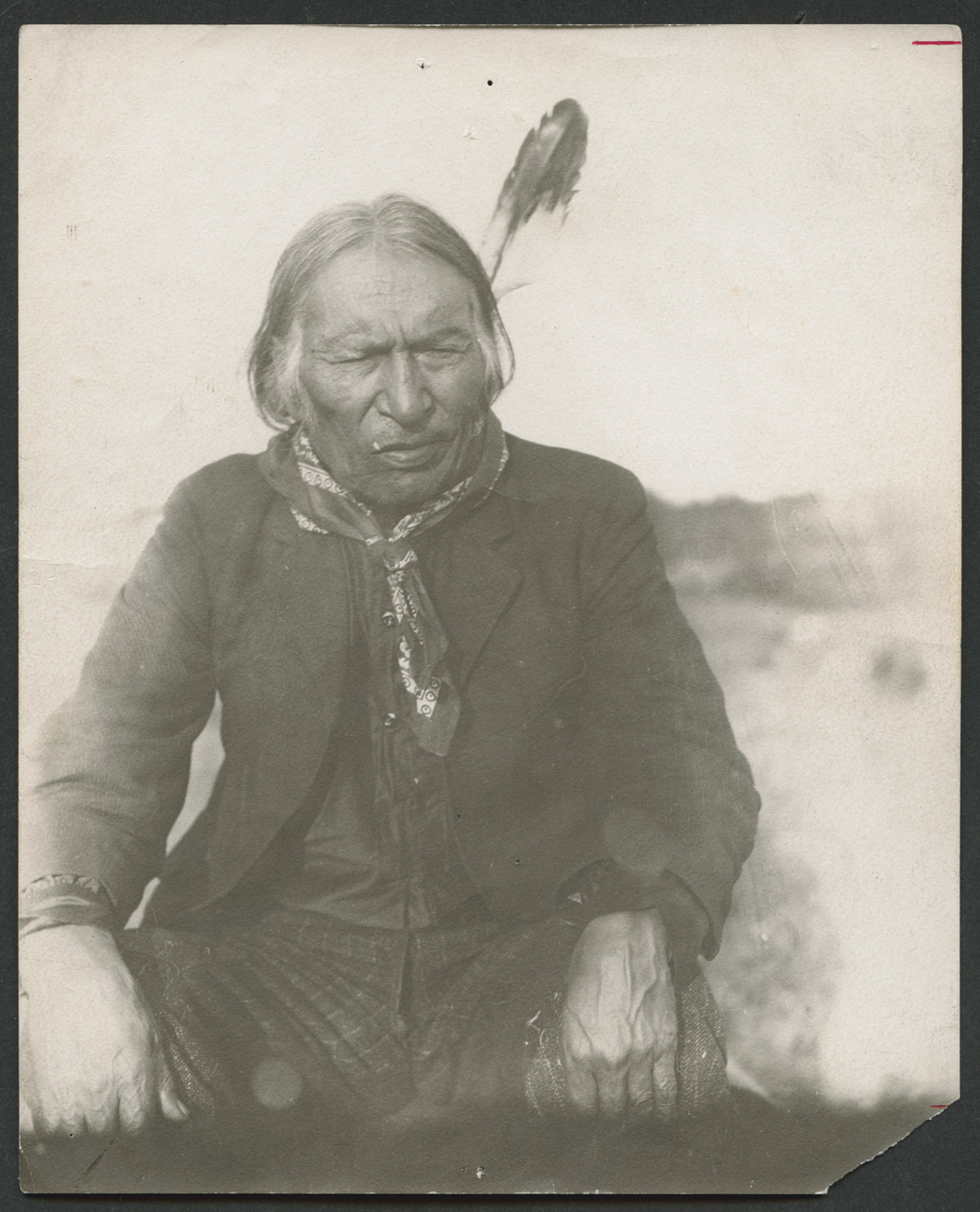 Another treaty council took place in 1863 between the Pembina Chippewas (those who lived west of the Red River and north of the Goose River), the Red Lake Chippewas (in northwestern Minnesota), and the federal government. The place where they met, on the Red Lake River, was called the Old Crossing. Little Shell (See Image 18) and Red Bear (See Image 19) represented the Pembina Band of Chippewas. Under pressure from people who wanted to own and farm land in northern Dakota Territory, the federal government asked the Chippewas to give up, or cede, nearly 9 million acres. All of that land was in northern Dakota Territory.

Map 11: The Devils Lake (Spirit Lake) Indian Reservation. The tan area in this map represents the present day Spirit Lake Reservation, or as it was called until the late 20th century, the Devils Lake Reservation. It consists of almost 231,000 acres. Of this acreage, the tribe owns 473 acres. Individual members of the tribe own 50,230 acres. The federal government owns 1,800 acres. Non-Indians own 178,497 acres. The actual acreages change over time as people buy and sell land, but the figures can be used to show how ownership of reservation lands has been divided up. Devils Lake Sioux Tribe Fact Sheet, September, 1967

In the 1880s, President Chester A. Arthur reduced the size of the Turtle Mountain Reservation two more times. (See Map 10) Before reducing the reservation, the president first tried to remove the Chippewas from the Turtle Mountains and Pembina regions. President Arthur wanted to send the Chippewas to the White Earth Indian Reservation in Minnesota. He also wanted to send some Chippewa families to Fort Berthold to live with the Mandans, Hidatsas, and Arikaras. A few families went to White Earth, but many Chippewas refused to leave their homeland. 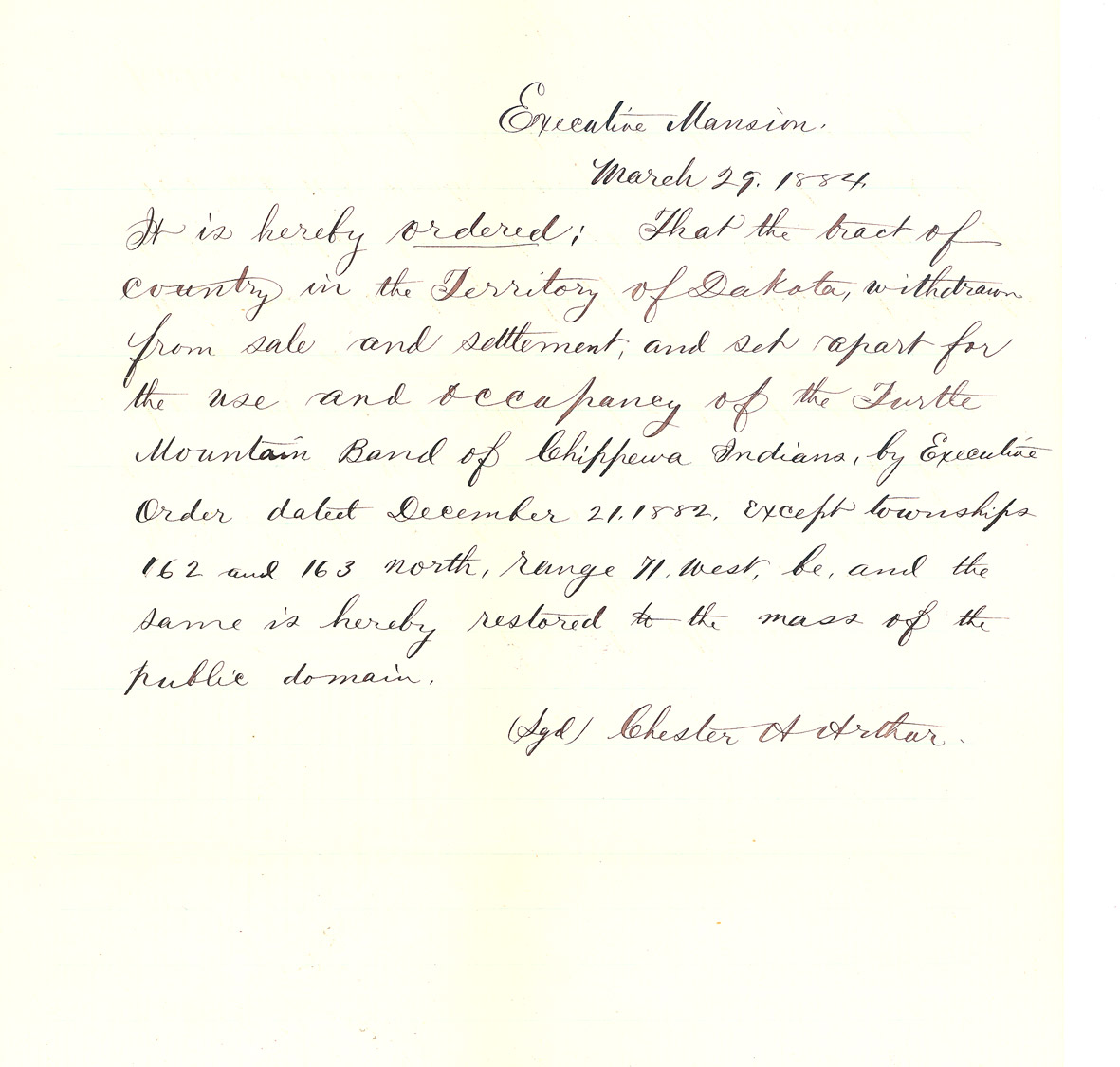 This area was too small for the Chippewa people. The federal government did not take into consideration several important factors when counting the population of the tribe. The Chippewas had often crossed the Canadian border as they hunted or moved their homes. The federal government did not want to count those who went to Canada as part of the Turtle Mountain band. In addition, many Chippewa women had married English or French fur traders. Their children were not full-blooded Chippewa. They were called Métis. U. S. government officials did not count Métis as part of the population of the Chippewa nation and wanted all Chippewas of Canadian origin to return to Canada.

The reservation of  two townships was much too small for the Chippewas and the Métis. The government recognized this and made provisions for some Chippewas at Trenton (in present day Williams County) and in Montana. 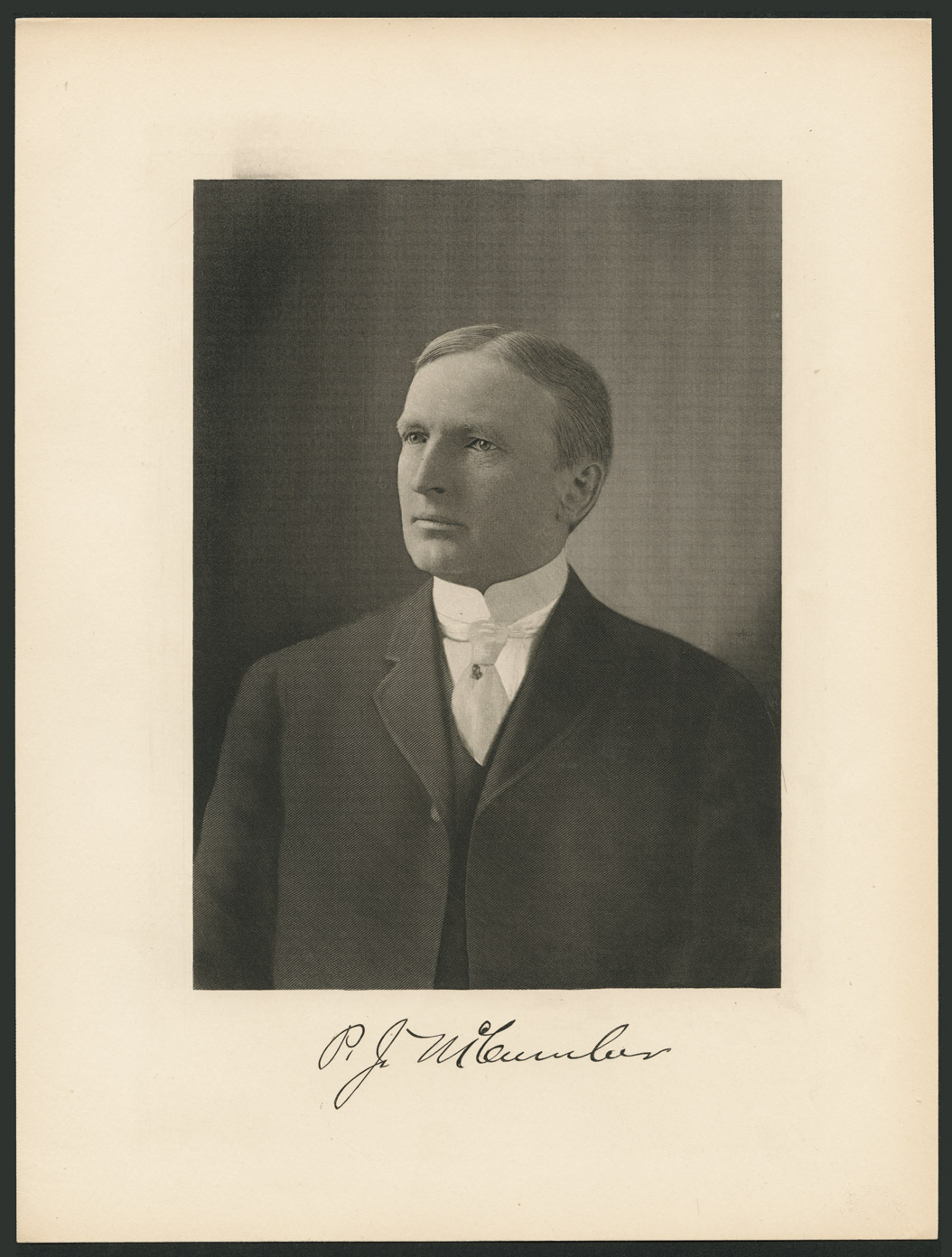 Image 20: Porter McCumber. Porter McCumber, a lawyer, businessman and former legislator, was elected to the U.S. Senate from North Dakota in 1899. He lived in Wahpeton. In 1892, he led the team of negotiators who arranged for the Chippewas to cede their land claims for 10 cents per acre. SHSND 0113-173

In September, 1892, Porter J. McCumber and other federal commissioners met with the Chippewa Council. (See Image 20) They reached an agreement over land and compensation for the Chippewas’ land cessions. Little Shell and his followers were purposefully excluded from the treaty discussions. Though Little Shell hired attorney Pierre Bottineau to represent his band, he was not allowed to participate in the council.

The members of the council that met with McCumber and the other commissioners were picked by John Waugh, the federal agent in charge. They were known as the Council of Thirty-two. They were not chosen by the tribe.

Though Little Shell traveled to Washington, D.C. to file a protest about the procedures used in reaching the McCumber agreement, the agreement was accepted (with some changes) by Congress in 1904. The Turtle Mountain Band of Chippewas received $1,000,000 for the 9,000,000 acres they ceded.

It is hereby ordered: That the tract of country in the Territory of Dakota, withdrawn from sale and settlement, and set apart for the use and occupancy of the Turtle Mountain Band of Chippewas Indians, by Executive Order dated December 21, 1882, except townships 162 and 163 north, range 71 West, be, and the same is hereby restored to the mass of the public domain.

Why is this important? The federal government’s treatment of the Chippewas was harsh. They lost so much land that the tribe had to split up. Relatives were separated and the political power of the tribe was diminished. Those who were excluded from the roll of tribal members were unable to draw rations or collect annuities. Starvation caused the deaths of many Chippewas both before and after the McCumber Agreement. Because the agent, not members of the tribe, chose the Council of Thirty-two, many Chippewas have argued that the agreement was not legal. The price the Chippewas received for their land was so low that the McCumber agreement is often called the Ten-Cent Treaty. 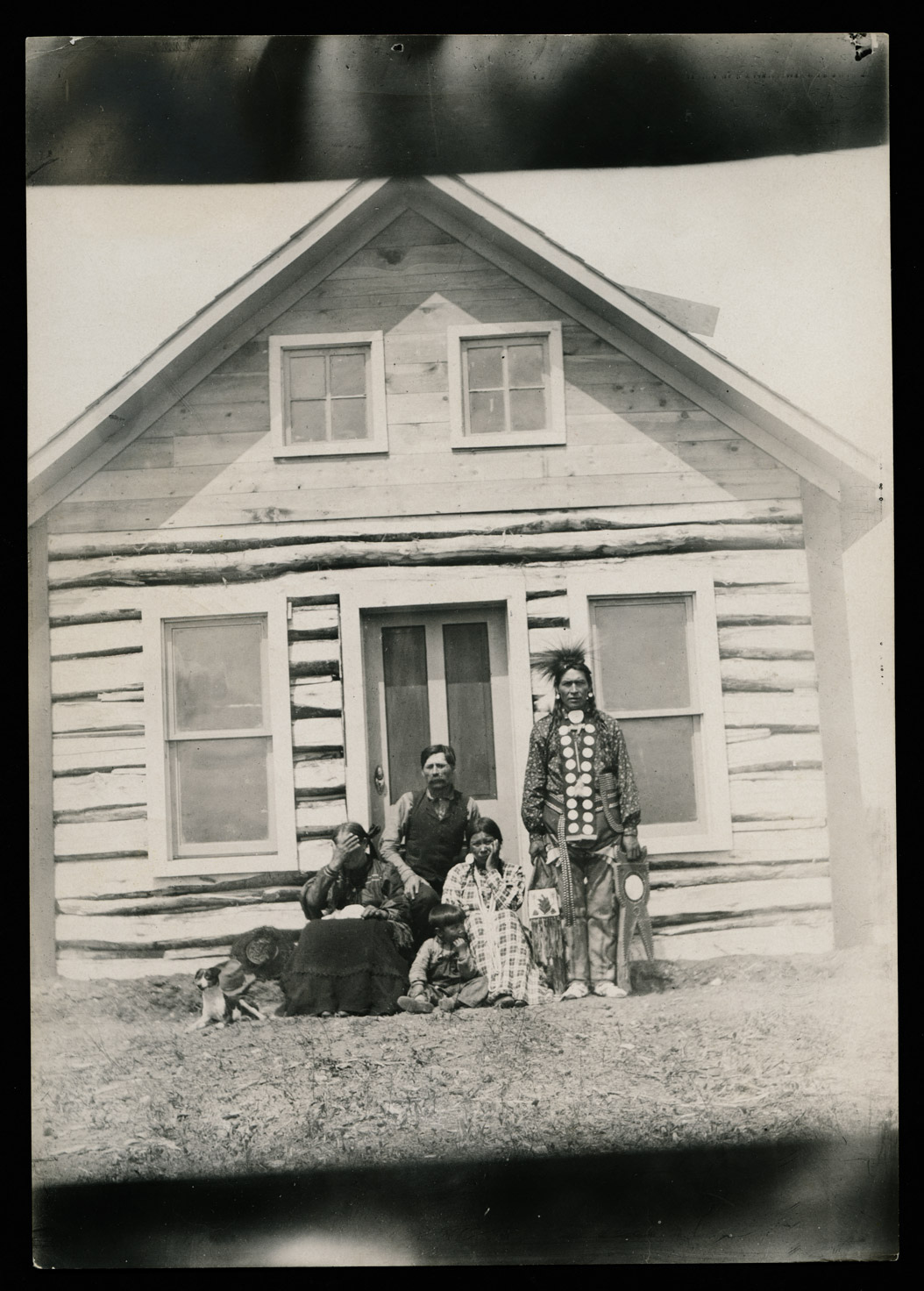 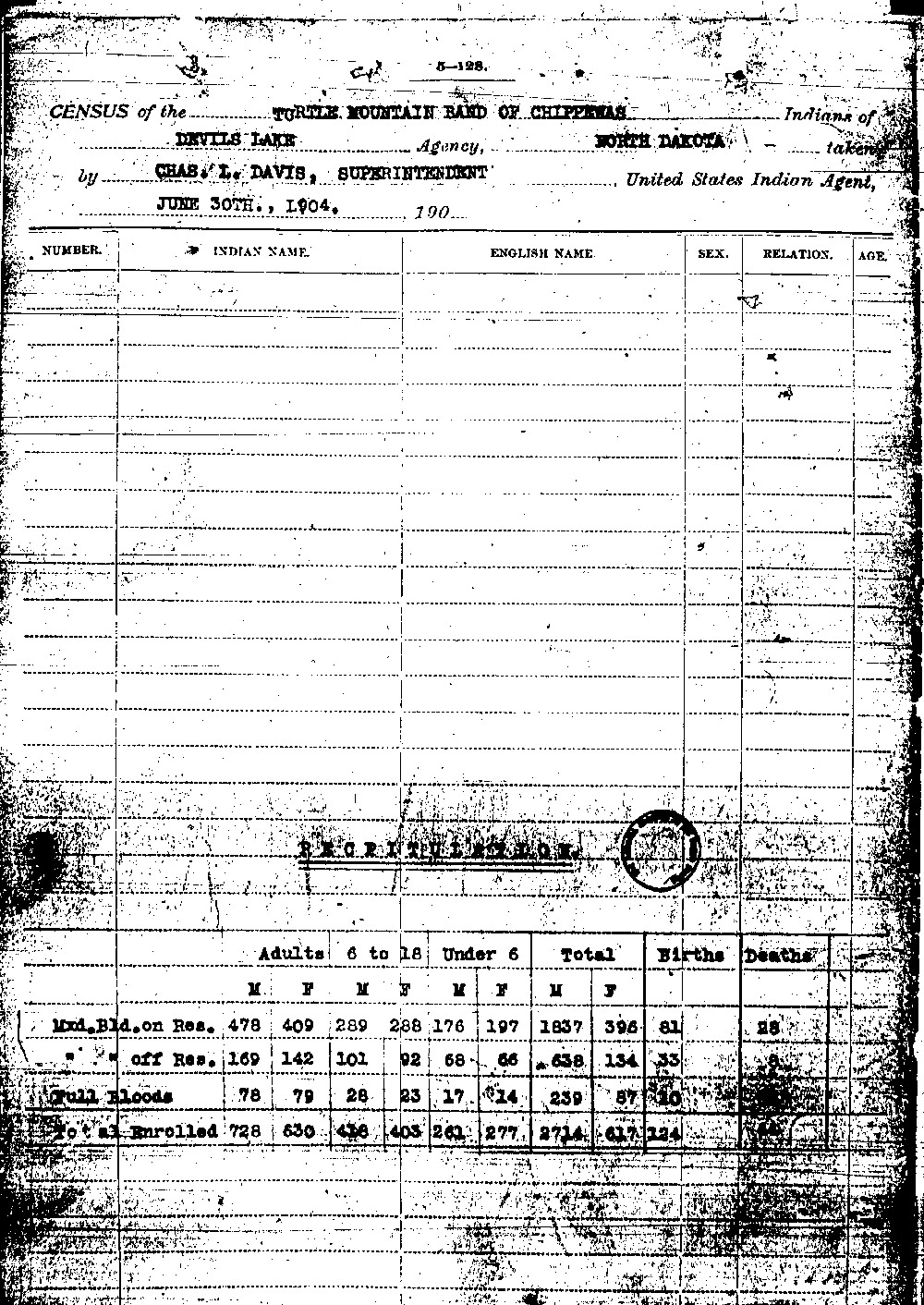 Document 29: Officials needed to know the number of Indians living on reservations (population.) The size of the population determined the quantity of food that was sent to the reservation as required by many treaties. Censuses are often inaccurate, but they are the best records for knowing something about a population. In the case of this census, the numbers in each box are probably close to accurate. However, the numbers in the box labeled “Total” are not correct. The agent did not carefully add the number across. When you make calculations based on this chart, be sure to avoid using the agent’s total figures. The Turtle Mountain Reservation was managed by agents at Devils Lake for many years. That is why the agent wrote “Devils Lake agency” on the document. Indian Census, 1904. SHSND 31112, Roll 5052

Most of the allotments at Turtle Mountain were for agriculture. That means that an adult male received 160 acres of land. The Turtle Mountain reservation, however, was so small (6 miles long and 12 miles wide) that there was not enough land for the residents of the reservation to receive allotments.

Simple math explains the problem. In 1904, the census counted 556 adult Chippewa men (full-blood and mixed blood) living on the Turtle Mountain Reservation. (See Document 29) The reservation was composed of two townships which is a total of 46,080 acres of land. If every adult male received an equal portion of land in those two townships, the portion of land to each would be 82.8 acres. This calculation, however, it does not take into account lakes, sloughs, and other places where a person cannot build a house or raise crops. 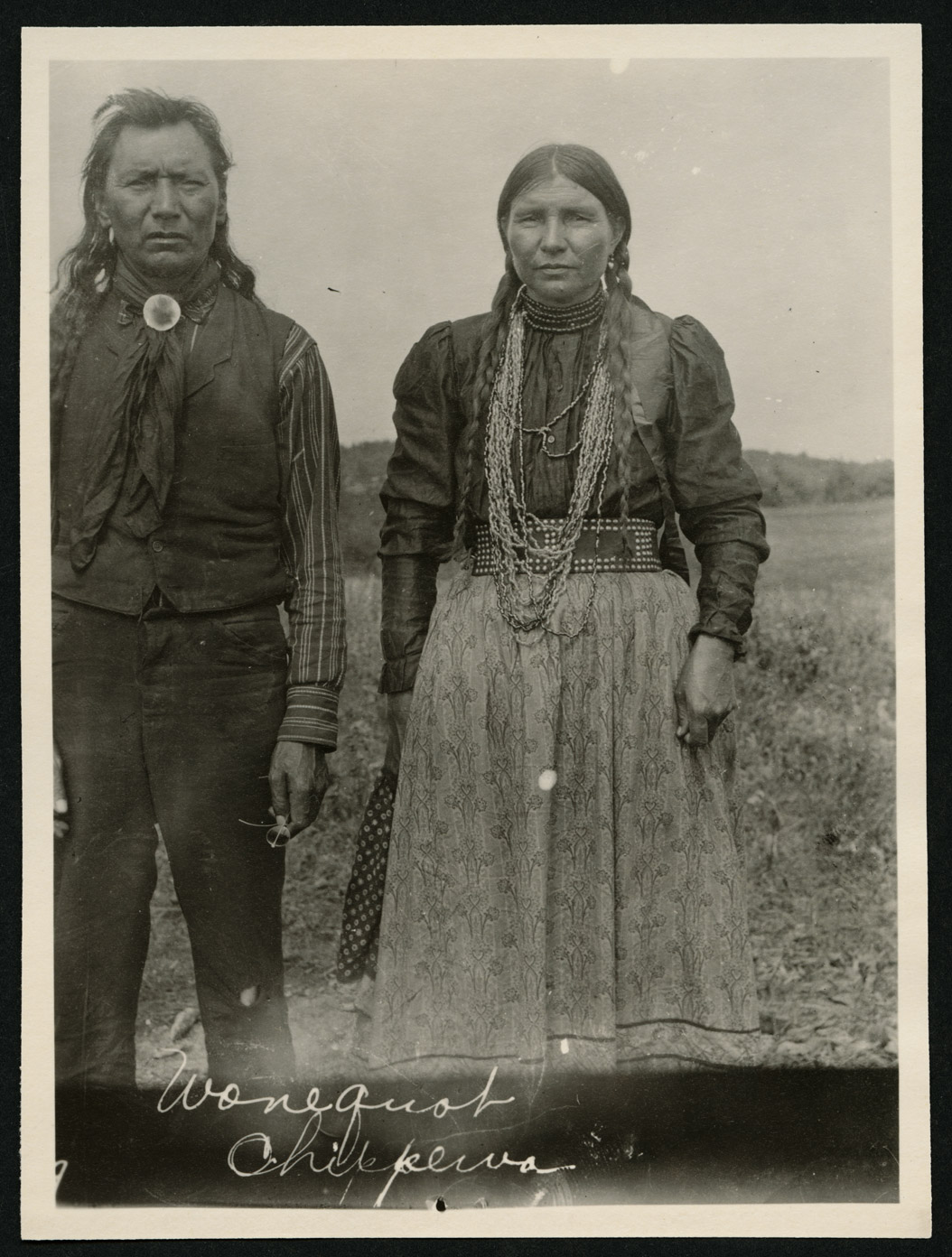 Image 22: Wonequot and his wife dress in a way that shows how they have blended both Chippewa traditions and European American traditions. The studded leather belt, beaded necklace and beaded collar on the woman’s dress are based in traditions acquired in the 18th century. Her blouse and skirt are typical of the dress of European American women at the end of the 19th century. Wonaquot’s neck scarf and shell pin are traditional while his shirt and trousers are modern. In much the same way, allotment brought European American thinking about land ownership to the Chippewas in 1904.SHSND A0149 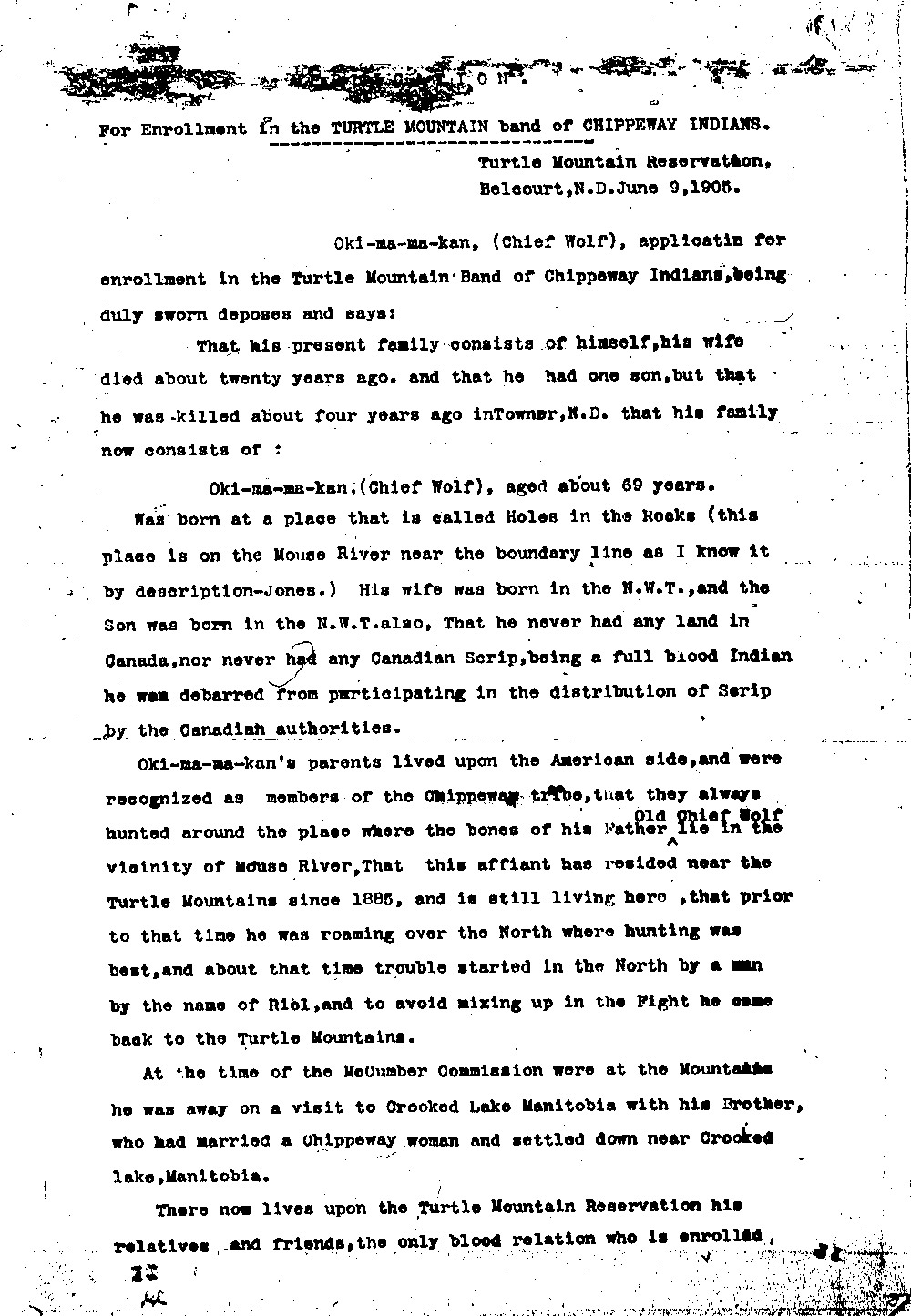 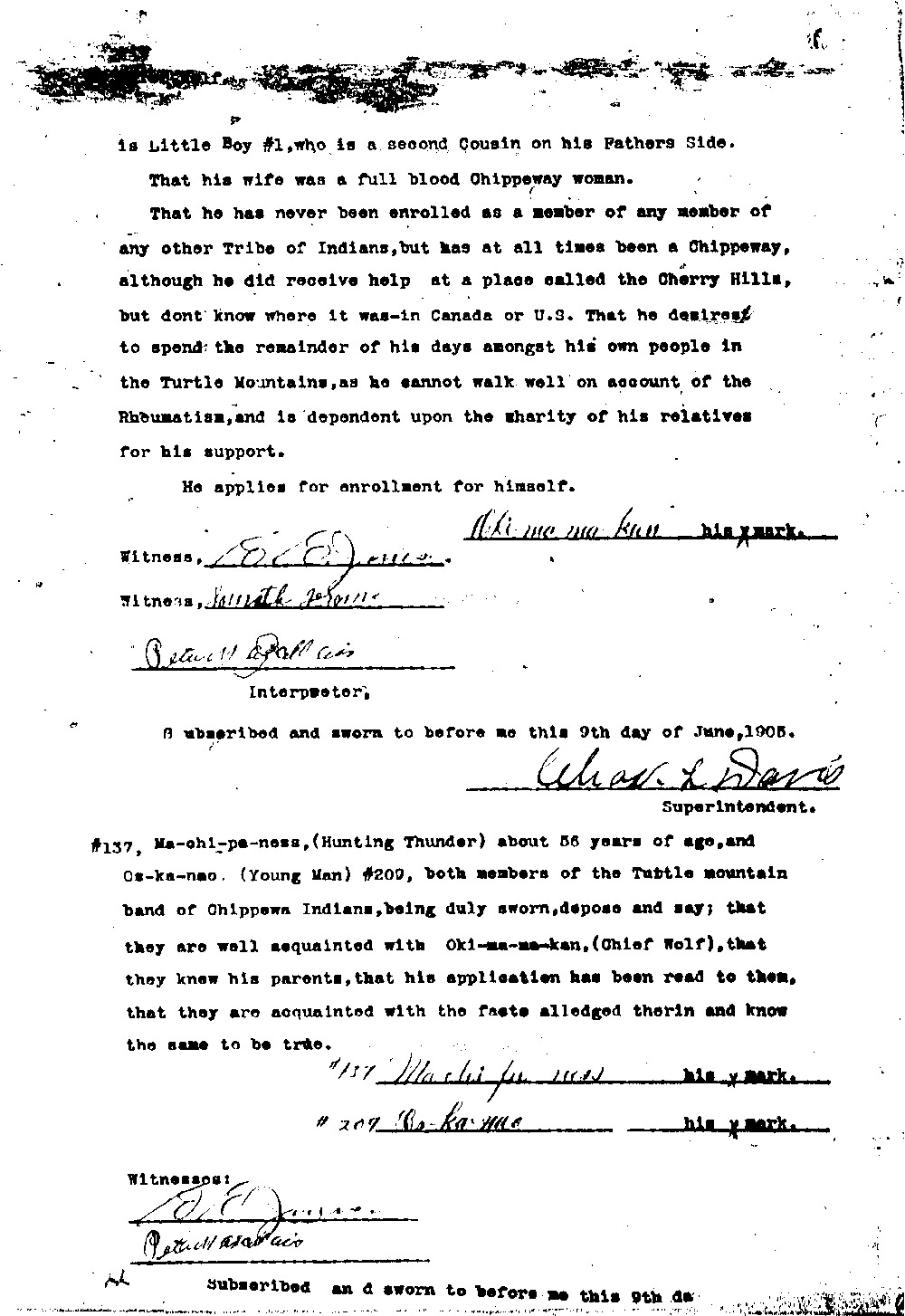 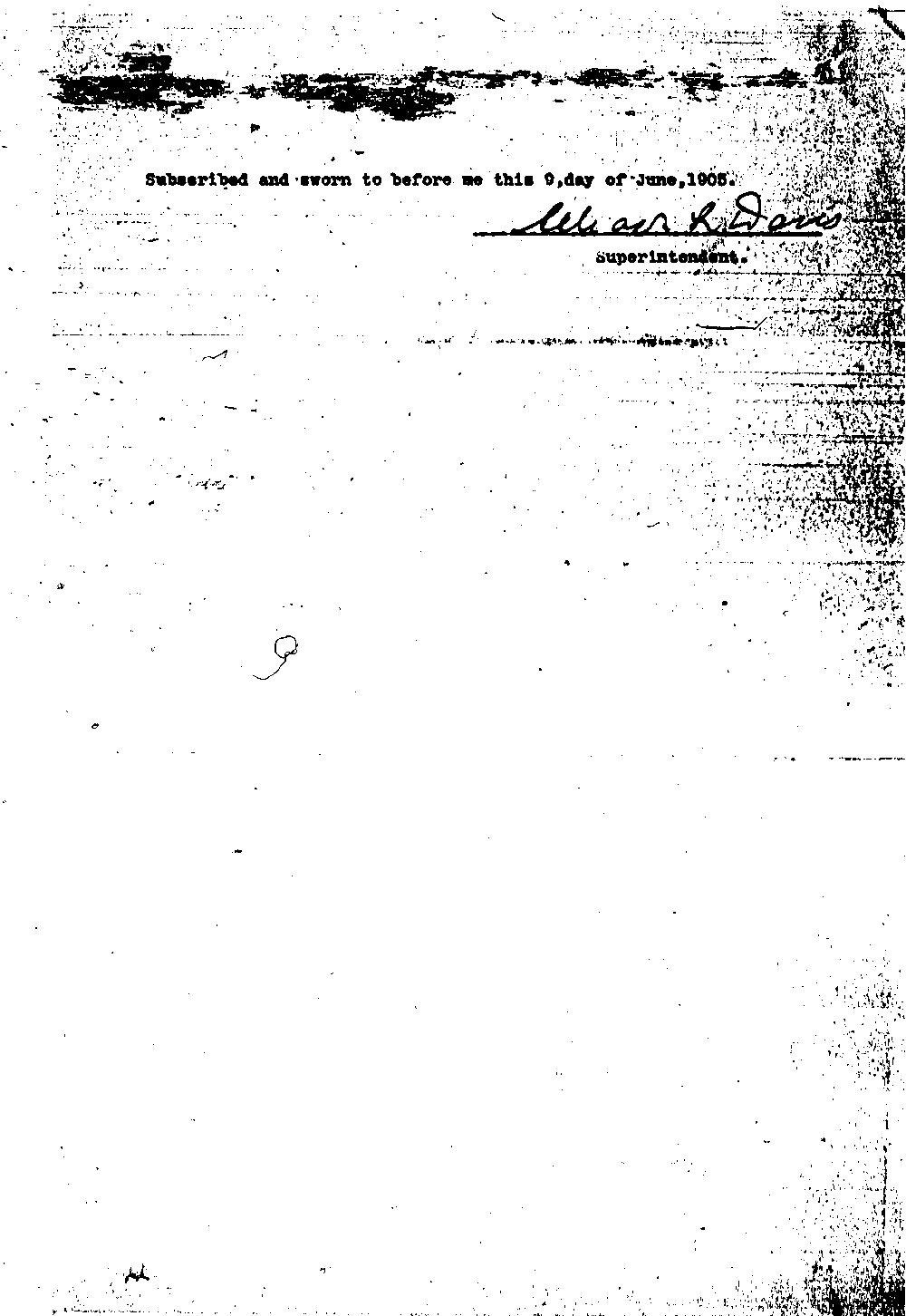 The allotment law (the Dawes Act) required that each adult male should receive 160 acres (for agriculture.)   Each woman and each child under 18 received between 40 and 80 acres of land. In order to accommodate the population of the Turtle Mountain Chippewa, the government had to make allotments off the Turtle Mountain reservation in the public domain. (See Image 22)

Many Chippewas went to the Fort Totten Indian Agency at Devils Lake where they lived among the Dakotas. Others went to the Trenton Service Area. Many others went to Montana or to scattered allotments around North and South Dakota.

For some Chippewas, the allotments were too far away from their homeland and their families. They did not move to their allotments. Some sold the land, and others lost their land to fraud because they did not live on the land. (See Document 30)

By 1930, there were 979 allotments for Chippewas in Montana and 178 more outside of Rolette County in North Dakota.

Why is this important? Allotment changed the way American Indians lived. Before allotment, the Chippewas lived in close communities. Families could rely on their relatives who lived nearby. Governing councils were able to meet regularly. After allotment, families who accepted their allotments and moved away to live on their land were separated from other members of their families. Those who refused to move faced over-crowding and poverty.