Dakota"Means 'friend' means “friend.” Thousands of people made up The Great Dakota Nation.• Made up of thousands of people
• Also called 'The Great Sioux Nation' They occupied parts of Minnesota, South Dakota and other areas west of the Mississippi River. The Chippewa Indians, enemies of the Dakota, called them “adders” (an adder is a type of snake). When the French traders tried to say this word in the Chippewa language, they could not say it correctly, and it came out sounding like "Sioux"• Name the French called the Dakota
• Means adder (snake) in the Chippewa language (soo). This name became commonly used for the people of The Great Dakota Nation.

The Chippewa Indians had made friends with the French who had given them guns and helped them in their battles. In time, the Chippewa began pushing the Sioux people out of Minnesota and into North Dakota. 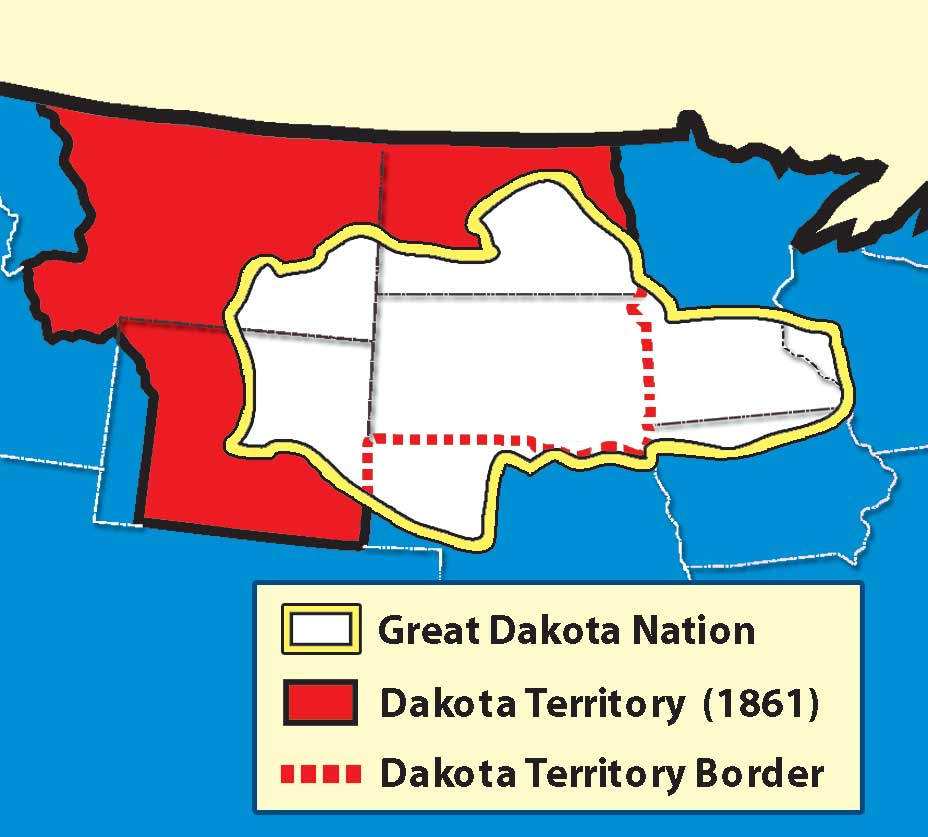 Figure 22. The Great Dakota Nation (about 1822) consisted of three separate groups—the Lakota (or Teton), Nakota (or Yankton), and Dakota (or Santee). (SHSND-ND Studies)

The Lakota became expert horsemen. Hunting bison was their main source of livelihood, but they also raided other tribes to get more horses and other items that they wanted. They claimed a very large hunting area ranging hundreds of miles from Oklahoma into Canada. All of the Sioux tribes were nomadic, but the Lakota were the most nomadic of the three groups of The Great Dakota Nation.

The Dakota, like the Lakota, traveled long distances on horseback to hunt and to raid other tribes. The nomadic tribes lived in tipis, so it was easy for them to pack and move to another place when the bison herds would move on.

The Nakota Sioux• Divided into two tribes
• Pushed into North Dakota from Minnesota by the Chippewa
• Settled in South Dakota and southern part of North Dakota were pushed west by the Chippewa. They were divided into two tribes that settled in South Dakota and the southern part of North Dakota. Many of them built permanent homes like the ones they had left in Minnesota. Hunting bison became a central part of their lives, but many people also raised corn, squash, and other vegetables.

The nomadic tribes lived more out in the open than the tribes who lived close together in permanent villages. For this reason, when the smallpox epidemics came, the disease did not spread among the Sioux as much as it spread throughout the agricultural people in villages. In fact, when the Mandan and Hidatsa were losing thousands of people to smallpox, Sioux warriors raided the villages and killed even more people.

The Indians of The Great Dakota Nation had been woodland people who had hunted, fished, and sometimes farmed. When they moved to the plains, they had to change their way of life from a woodland culture to a plains culture.

Figure 23. This chart shows the divisions of the Great Dakota Nation. (SHSND-ND Studies) 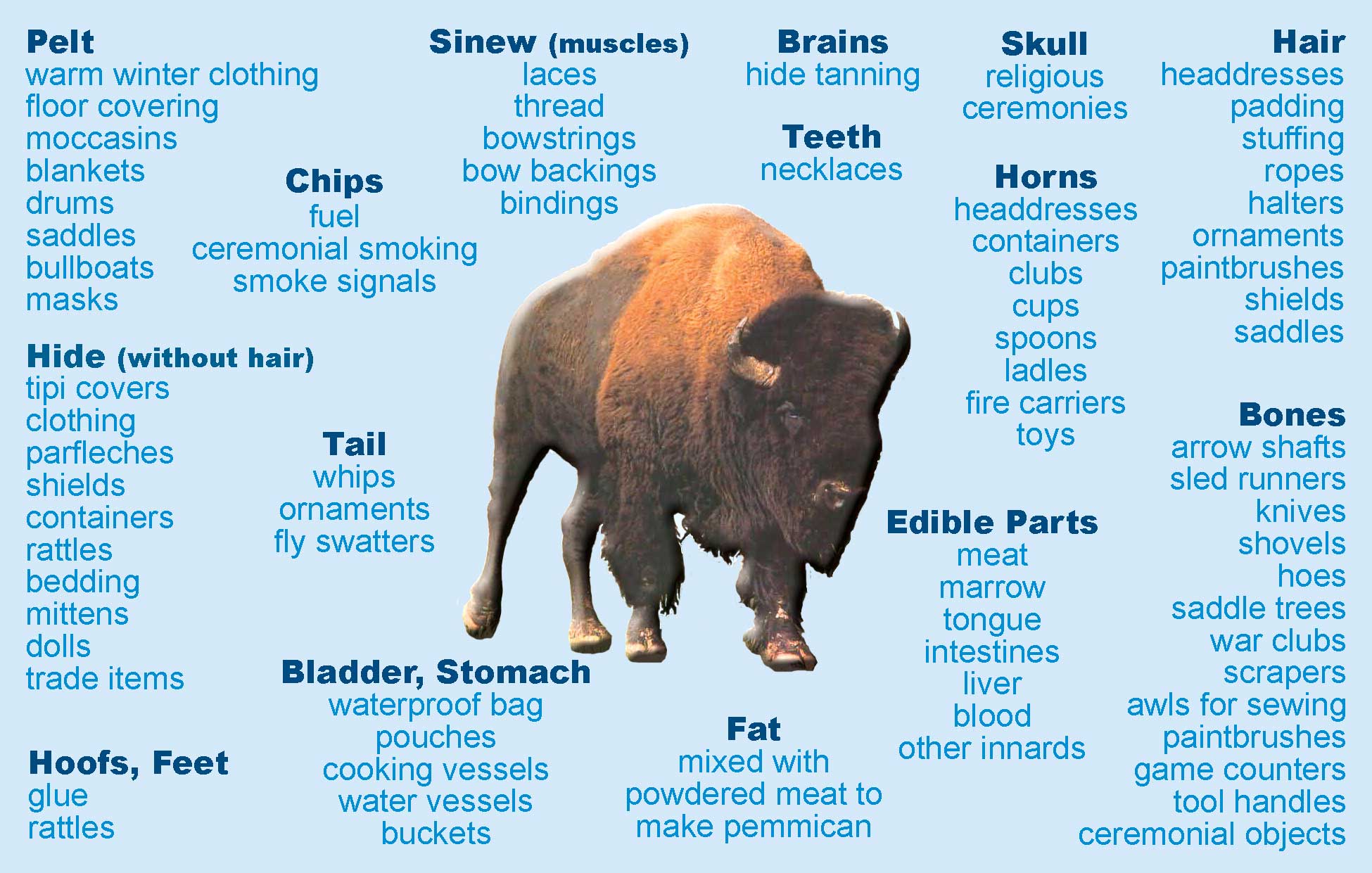 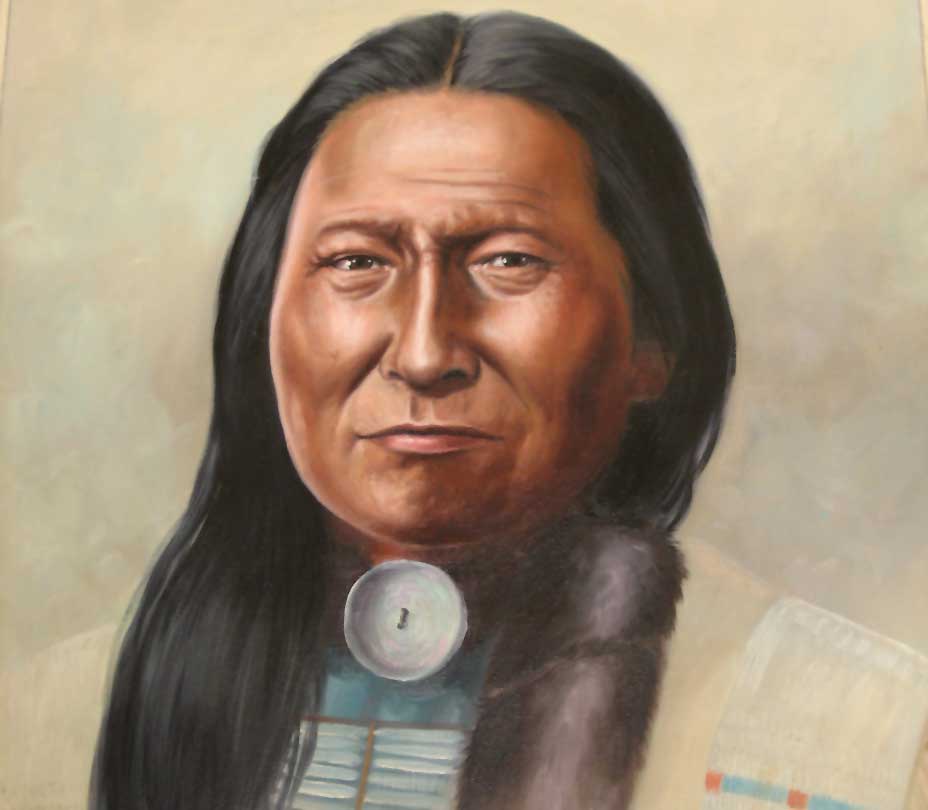 Millions of bison lived on the plains, and these huge animals were very different from the forest animals that had been hunted in the woodlands of Minnesota. In fact, the survival of the plains people depended on hunting bison. They used every part of the animal, not wasting anything. The bison has been called “a walking department store” because so many items came from this animal. Food, shelter, clothing, weapons, tools, and musical instruments are a few examples of products that were made from the bison.

Millions of years ago, tiny, three-toed horses lived in North Dakota. They became extinct millions of years before modern horses arrived. Modern horses did not live on the continent of North America until people from Spain brought them to the southern part of the continent in the 1500s. They slowly spread northward as they were traded from tribe to tribe until the horses reached North Dakota toward the end of the 1700s. After the Indians got horses, they were able to travel long distances which made the bison hunting much easier.

It has been estimated that before 1800 about 60 million bison roamed the plains. The Sioux, as well as all of the other Indians of the plains, had lived for many years being totally dependent on the bison.

Because North America was the only continent where bison lived, Europeans had never seen such an animal. When traders began sending bison robes to Europe, the robes became so popular that the traders could not keep up with the demand.

In the 1800s, millions of bison were killed. Bison hide traders, farmers, railroad companies, sport hunters, and the U.S. Army all had a part in reducing the bison herds. Wagon load after wagon load of bison robes were hauled away to be sold in the east or shipped to Europe. Farmers wanted the bison gone so that they could raise crops and build fences for their cattle. Railroads were being built across the continent, and the railroad companies wanted to bring in more settlers so that they would get more business. Bison herds were in the way of settlement, so the railroads hired people to shoot the animals. The U.S. Army wanted the Indians’ food supply removed so that the Indians would move to reservations. Hunters came from the east to shoot bison just for sport. Most of the bison meat and other parts were wasted by these whites.

Because of all of these wasteful killings, the magnificent bison became almost extinct. It has been estimated that by 1890, only about 500 bison remained in North America. The loss of their food supply led to the defeat of the Lakota and other plains tribes. The bison had not only served as the source of their food, but it had also been a sacred animal for them. With its disappearance, they lost a great source of their spiritual strength.