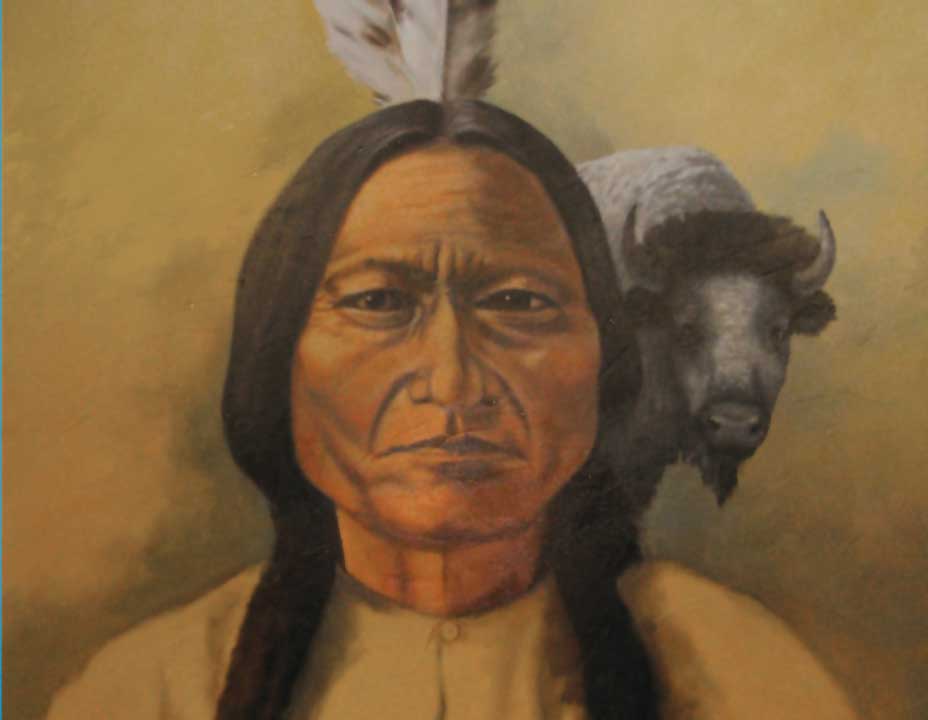 Sitting Bull was a Lakota leader and medicine man who became one of the most famous American Indians in the world. He was born around 1831. When he was about 14 years old, he proved his bravery in a battle, and that was the beginning of his career as a warrior. Sitting Bull was the leader of the Hunkpapa band of the Lakota and widely respected leader in the Lakota Nation.

Sitting Bull’s goal was to protect his people and their lands from “whites” who were moving onto Indian lands and killing off the bison. In 1876, Lakota and Cheyenne families gathered at the Little Big Horn River in Montana. In June, army troops led by George Custer from Fort Abraham Lincoln (near present-day Mandan, North Dakota) attacked, but the Lakota warriors defeated Custer’s army, killing Custer and most of his soldiers.

After Custer’s defeat, the U.S. Army began attacking all Indians who were not on reservations. Sitting Bull led his followers to Canada for safety. In 1881, Siting Bull surrendered to save his people from starvation. He and his people were sent to the Standing Rock Sioux Reservation.

Sitting Bull became famous because of the battle with Custer, so he was asked to join “Buffalo Bill’s Wild West Show.” He agreed because he wanted to earn money to help his people. He stayed with the “Wild West Show” for four months. He earned good pay, but he missed his home and family at Standing Rock.

A few years after Sitting Bull returned to Standing Rock Reservation, a new religion called the “Ghost Dance” came to the Lakota. Ghost Dancers believed that if they danced and followed the beliefs of the Ghost Dance that the bison would return.

The reservation agent feared the power of the Ghost Dance and Sitting Bull’s influence on the unhappy Lakota. The agent sent Indian police to arrest Sitting Bull. His followers resisted and there was a fight. Sitting Bull was shot and died.

Sitting Bull is honored today as one of the greatest leaders of the Lakota Nation.