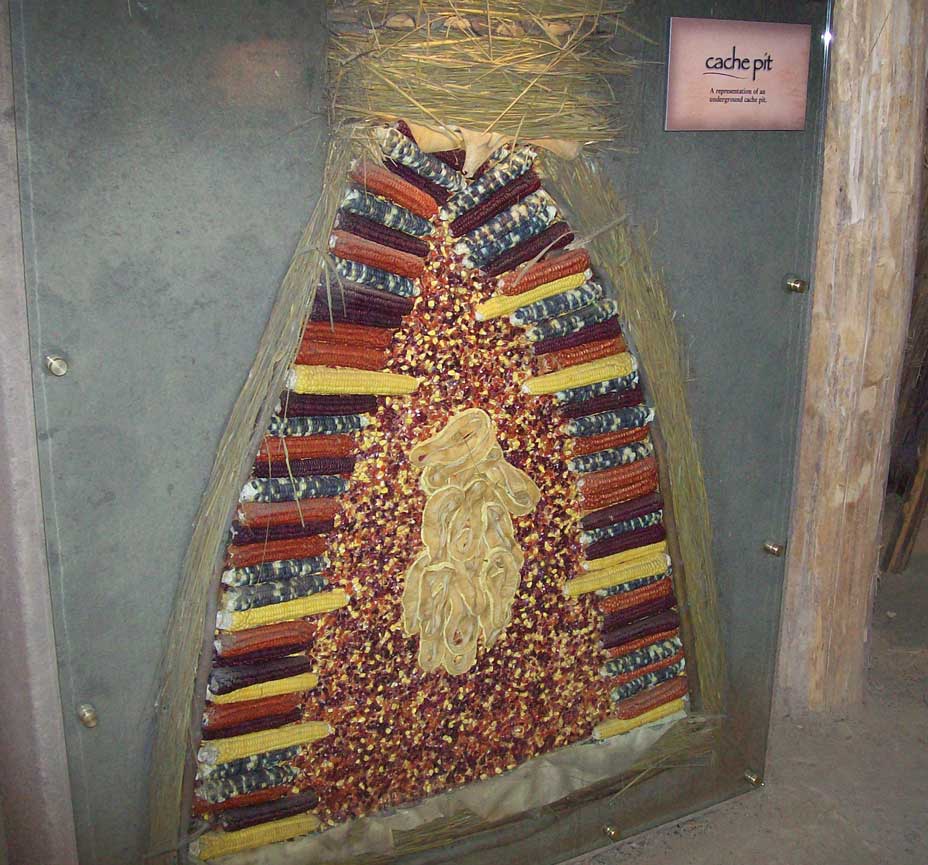 Figure 15. A cache pit was used to store dried corn, nuts, berries, and squash. This is a side view showing the inside of a cache pit. (Photo by Gwyn Herman)

The Mandan and Hidatsa people lived in villages of earthlodges. The earthlodge was a dome-shaped home made of logs and covered with willow branches, grass, and earth. The women built, owned, and took care of the homes. They also owned the property within the homes, as well as the food, gardens, tools, dogs, mares (female horses), and colts (young horses). When a couple got married, the man moved into his wife’s home. He brought only a few things along, such as his medicine bundle, clothes, weapons, and horses. The men were responsible for protecting the village and hunting for meat.

Besides bison hunting, agriculture (farming) was a means of support for both the Mandan and Hidatsa. The women were the farmers. Corn, squash, pumpkins, beans, sunflowers, and tobacco were their main crops. Raising these crops provided food for the families. The crops were also used as trade items to get products from other tribes. 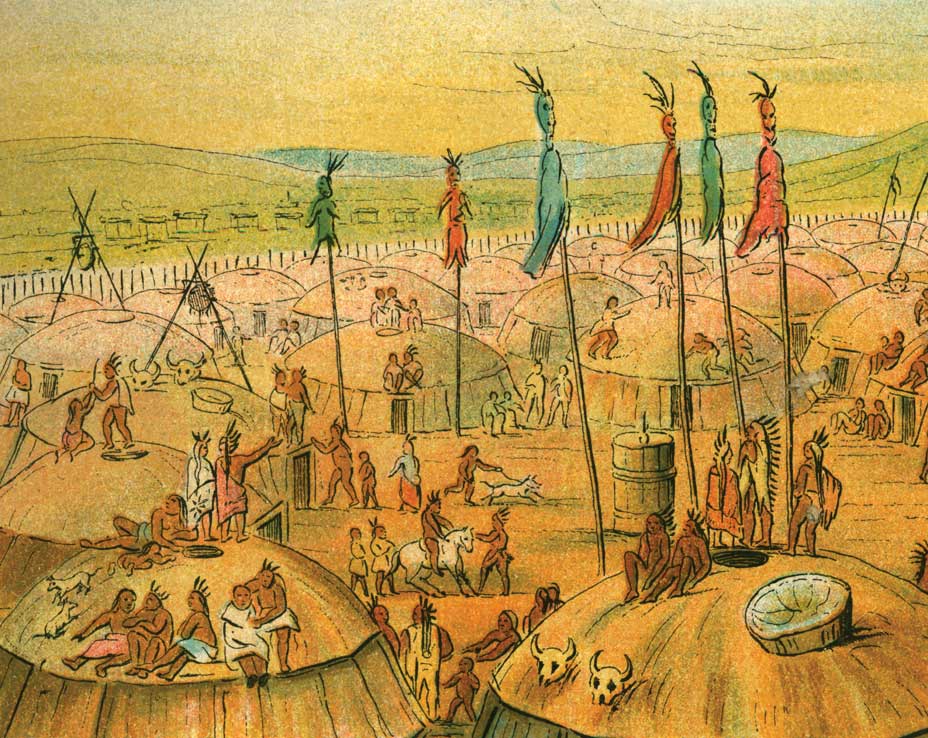 Each earthlodge had a hole in the ground about 3 to 4 feet deep. This was called a cache pit. It was used to store dried corn, nuts, berries, and squash. The cache pit acted somewhat like a refrigerator because of the cooler temperatures below the surface of the ground.

From 20 to 40 earthlodge homes usually made up a village. The villages became major trading centers. Money was not needed in this trading business because a system called “bartering” was used. Bartering means trading items for other items without exchanging money. Nomadic tribes would come to the villages to get corn and other food products. In turn, the agricultural people would trade for items that the nomadic tribes had gotten by hunting or trading in other places.

During the summers, nearly the entire village would take their tipis and move out onto the plains to hunt bison. The actual hunting would be done by the men, but getting the meat ready for winter use was a job done mostly by the women.

Horses came to the people of this region around 1750, but weren’t important until around 1800. The Mandan and Hidatsa probably obtained their first horses by trade with Indians of other tribes. The Mandan, Hidatsa, and Arikara learned that horses made hunting easier. Horses were also important in defending the village. Horses became important trade items and were often stolen by enemies.

Warriors from one tribe would often raid other tribes in order to take their horses.

About 400 years ago, the Mandan people from some nearby villages got together and built a new village beside the Missouri and Heart Rivers (near the present-day city of Mandan, North Dakota). They called this village On-A-Slant because it slanted toward the Heart River. About 75 lodges were located in the village, and its population was about 1,000.

In 1738 (about 280 years ago), a French fur-trapper and trader named Pierre La Vérendrye (lah ver-ON-dree) came to North Dakota from Canada. La Vérendrye was among the first non-Indians to set foot in North Dakota. La Vérendrye wrote in a journal about his experiences and so became the first Euro-American to record history in this area.

La Vérendrye spent some time visiting and trading with the Mandan people along the Missouri River. He estimated that their population was about 15,000 and reported that they were very peaceful people.

Some years after La Vérendrye’s visit, other Europeans and Euro-Americans began trading with the people in North Dakota. They would bring metal tools, cloth, beads, rifles, kettles, and other manufactured goods to trade for garden crops, meat, furs, and other items. 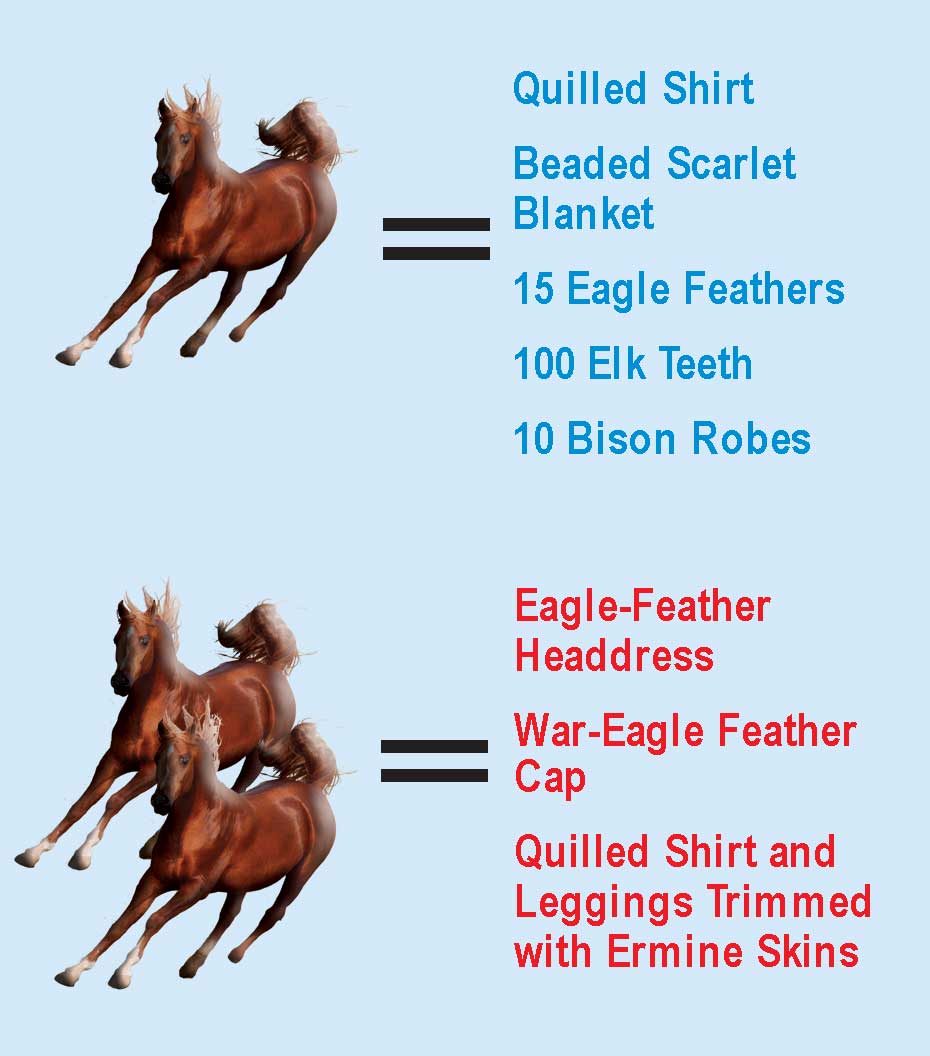 Figure 18. The horse was valued by the Plains Indians. Horses provided a big advantage in hunting and war. The horse was also used for trading. Notice the items that could be traded for a horse. (SHSND-ND Studies)

Because the Missouri River was a major travel route, the agricultural villages along the river were an ideal setting for trading. In fact, this area became one of the largest trading centers on the continent. It has been called “The Marketplace of the Central Plains.”

Trade with non-Indians changed the Indians’ way of life in many ways. Spear heads and arrow points could now be made of metal instead of chipped stone; cloth could be used in place of hides to make clothing and blankets; and colored glass beads could be used for decorations on clothing instead of the porcupine quills that had been used before. Trading was done within the villages, and forts were also set up as trading posts. Corn, bison hides, and beaver pelts were considered very valuable by Europeans and Euro-Americans, and commerce became a huge business.

At the same time that commerce was becoming more important, something dreadful happened that had a tragic impact on the Indian people. The natives of North America had never been exposed to deadly diseases that had been in Europe for hundreds of years or more. Therefore, they had no natural immunity from diseases such as smallpox, measles, and typhoid fever.

In 1781, a severe smallpox epidemic occurred in the villages. This horrible killer reduced the population of the Mandan Indians from about 12,000 to about 1,500 within a matter of just a few months. 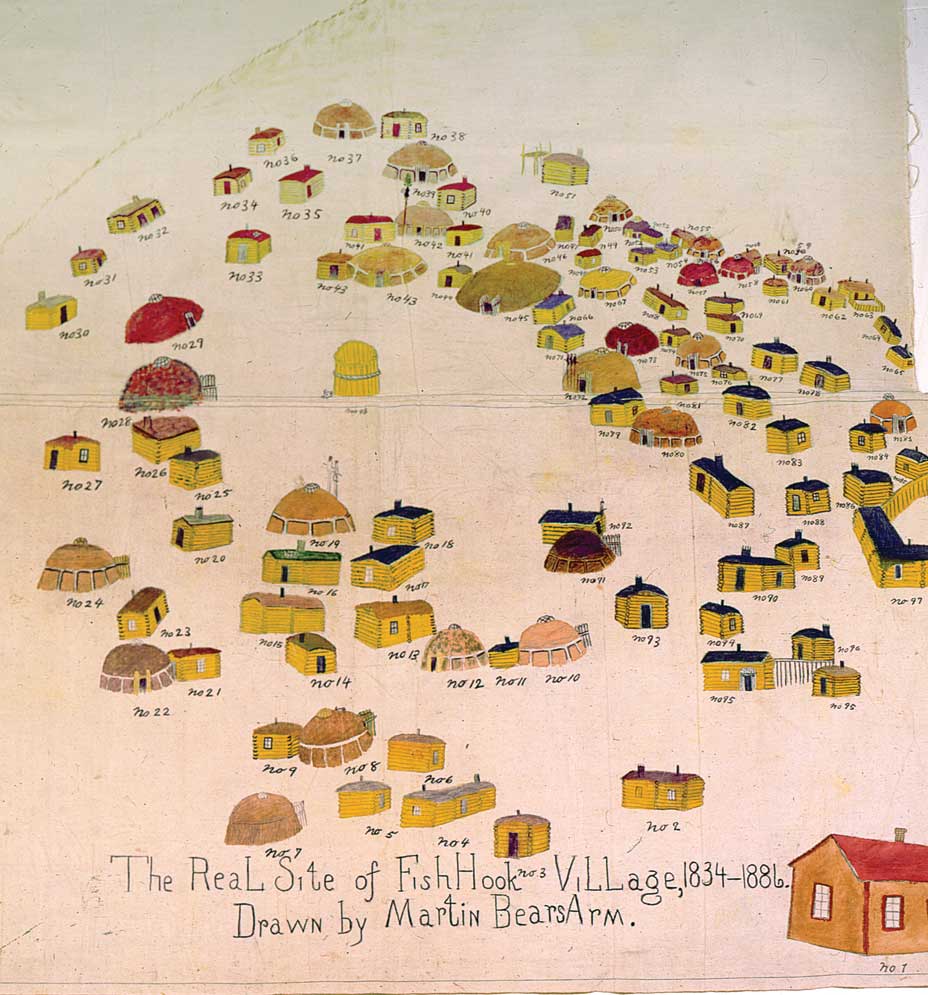 Figure 20. Like-A-Fishook village, named for its location, was built by the Mandan and Hidatsa. The drawing is by Martin Bears Arm. (SHSND 799)

On-A-Slant village, which had existed for about 200 years, was almost totally wiped out. Another village, on the present-day historic site called Double Ditch Indian Village near Bismarck, North Dakota, had been occupied for almost 300 years, and when the epidemic struck, most of the residents died.

After the villages were weakened by disease and death, the Lakota attacked. The attacks caused the remaining people to move north, closer to the Hidatsa. The Hidatsa also lost many people to smallpox.

In the 1700s, the Arikara (ah-rick-ah-rah), or Sahnish, people came from the south and settled along the Grand River, a tributary of the Missouri. During the early 1800s, they moved northward along the Missouri River. When the smallpox epidemic hit, their population was reduced from about 20,000 to only about 4,000. In about 1825, they continued up the Missouri River and settled near the Mandan and Hidatsa villages.

The Mandan and Hidatsa people were somewhat alike in their lifestyles and languages. The Arikara had a very different culture, but they lived in earthlodges in permanent villages. They raised crops and were traders. All three tribes benefitted from this close relationship.

In 1837, a steamboat docked at the Fort Clark trading post (near the present-day town of Washburn, North Dakota). A man on the boat was sick with smallpox, and the illness had spread to others on board. By the time the steamboat reached Fort Clark, it contained several men with smallpox. When Indians came aboard the boat to trade, they were exposed to the illness. Though a warning was sent to other camps and tribes, the disease spread rapidly among the Indian tribes.

Entire families as well as entire villages were wiped out by this disaster. The population of the Mandan people was reduced from about 2,500 to only about 125 people. More than half of the Arikara people died, leaving their population at about 1,500. The Hidatsa were also hard-hit.

Smallpox was a disease that affected Europeans for hundreds of years. It came to North America with the colonists. Europeans often died of the disease, but those who recovered became resistant or immune to another infection. American Indians had no immunity

In the 1820s, an English doctor developed a vaccine for smallpox. The vaccine helped prevent the disease in people who were given the vaccine.

In the 20th century doctors and scientist made a major effort to wipe out smallpox. They were successful. Today smallpox is a disease of the past, and no one can get the disease. 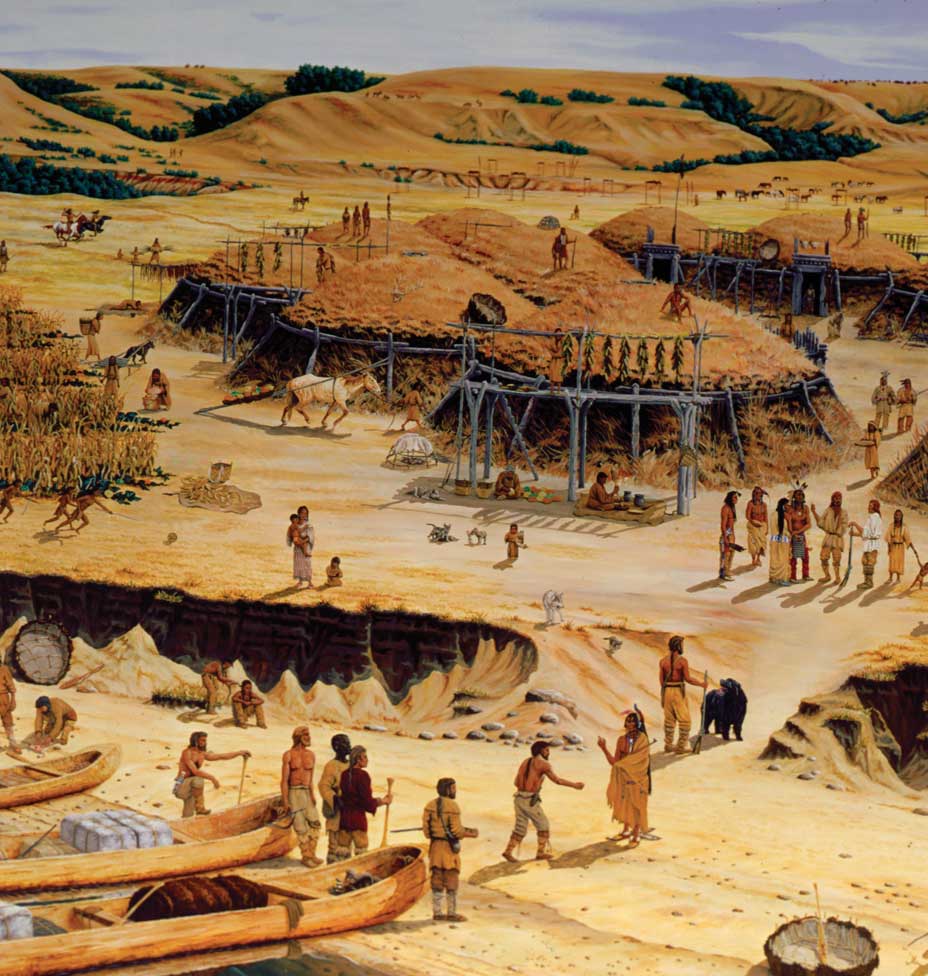 Figure 21. The Lewis and Clark Expedition visits Black Cat village in 1806.  The village was near present-day Washburn, North Dakota. (SHSND 2003.9)

In 1845, the Mandan and Hidatsa people started a village together on the Missouri River north of their old villages. The area of land where they built this town was in a bend of the river that reminded them of a fishhook. They called this village “Like-A-Fishhook.” In 1862, the Arikara joined them. All three tribes had lost so many people in the epidemics that they felt it was necessary to band together to protect themselves against nomadic tribes that were raiding their villages.

Even though the three agricultural tribes were alike in some ways, they each had their own language, as well as other cultural differences, so each tribe lived in its own section of the village. The Mandan, Hidatsa, and Arikara groups became known as the Three Affiliated Tribes.

In 1851, a treaty with the U.S. government set aside twelve million acres of land as a reservation for the Three Affiliated Tribes, but the government later took away most of this land, leaving the Tribes with only about a half-million acres.