By 1911, residents of North Dakota were feeling settled in their farm homes. Schools had been established in small communities, but there was widespread interest in improving educational opportunities throughout the state. However, many small towns could not afford to build and maintain a high school, so parents often sent their children to larger towns some distance away where they “took rooms” or boarded with a family so that they could earn a high school diploma. The 1911 legislature addressed one aspect of this problem by providing a legal framework and financial support for communities and counties where the voters approved a high school for instruction in “agricultural, domestic economy, manual training” and teacher training. These agricultural and training schools were to be jointly funded by the state and county. 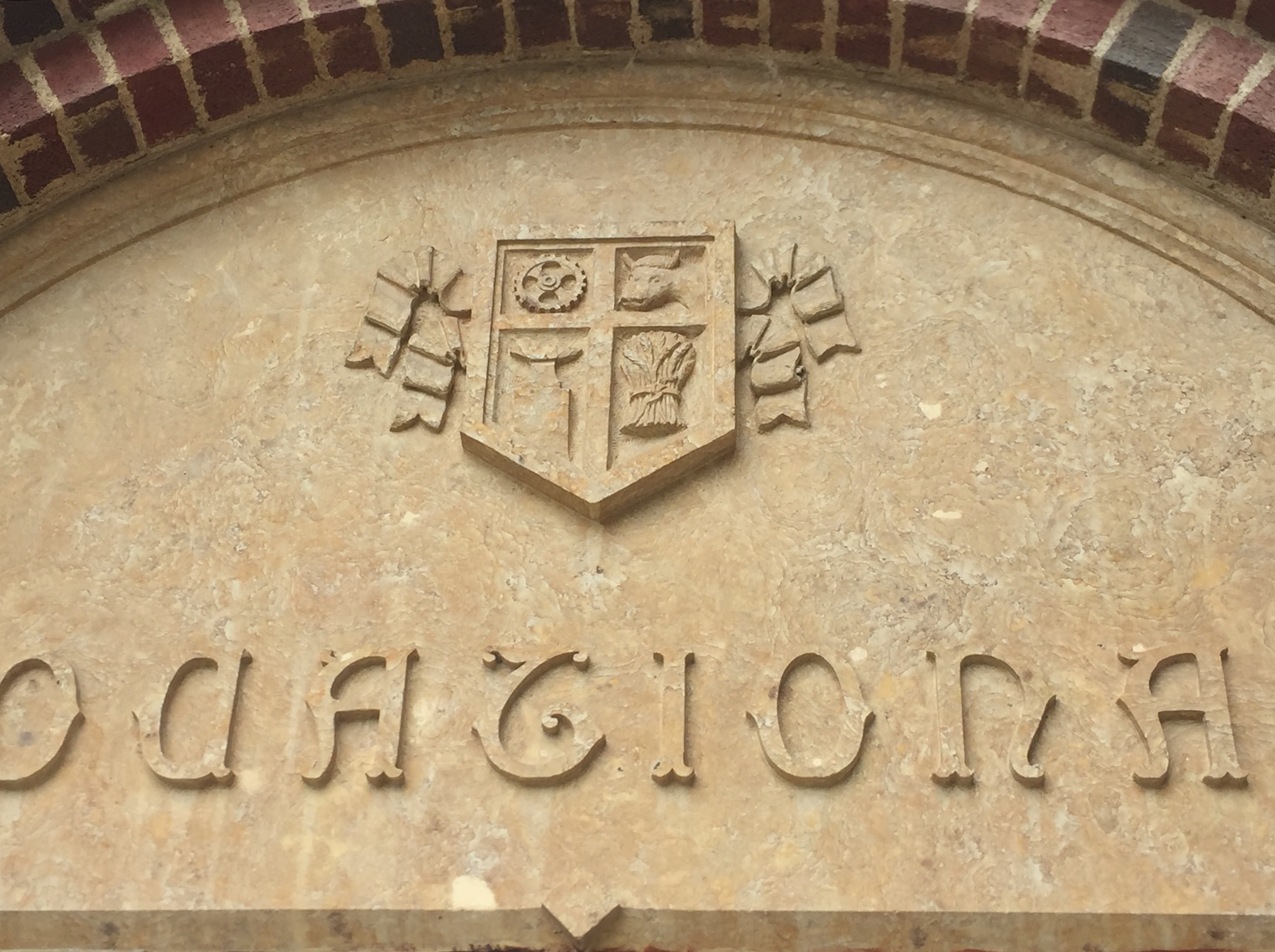 Image 1: Velva built a new agricultural high school in 1928. Over the entrance, symbols of agriculture and mechanical arts were preserved in a frieze. Upper left is a gear, upper right is a bovine, lower right is a sheaf of wheat, and lower left is an anvil. Courtesy, Kristi Howe

The next legislative session authorized the establishment of state-funded high schools with a course of study in agriculture, manual training (today known as Trade, Industry, and Technical Education), and domestic science (now known as Family & Consumer Sciences). The law allowed only five high schools to be constructed in one year and only one state agricultural high school in each county. After the first five schools were designated, five more could be added in the following two years. However, no schools were opened under this law after the first five were chosen.

The process of choosing the location of the schools began at the community level. First, county residents petitioned the board of county commissioners to apply for a state high school. Once approved, various towns in the county competed to become the host city for the school. Each town had to show that it had the land (the law required at least ten acres) and the financial resources to build and maintain the school. The state would provide $2,500 each year in support. The remainder of the estimated $18,000 to $20,000 yearly budget was to be provided locally. The schools had to hire competent faculty with college degrees in the fields they would teach. 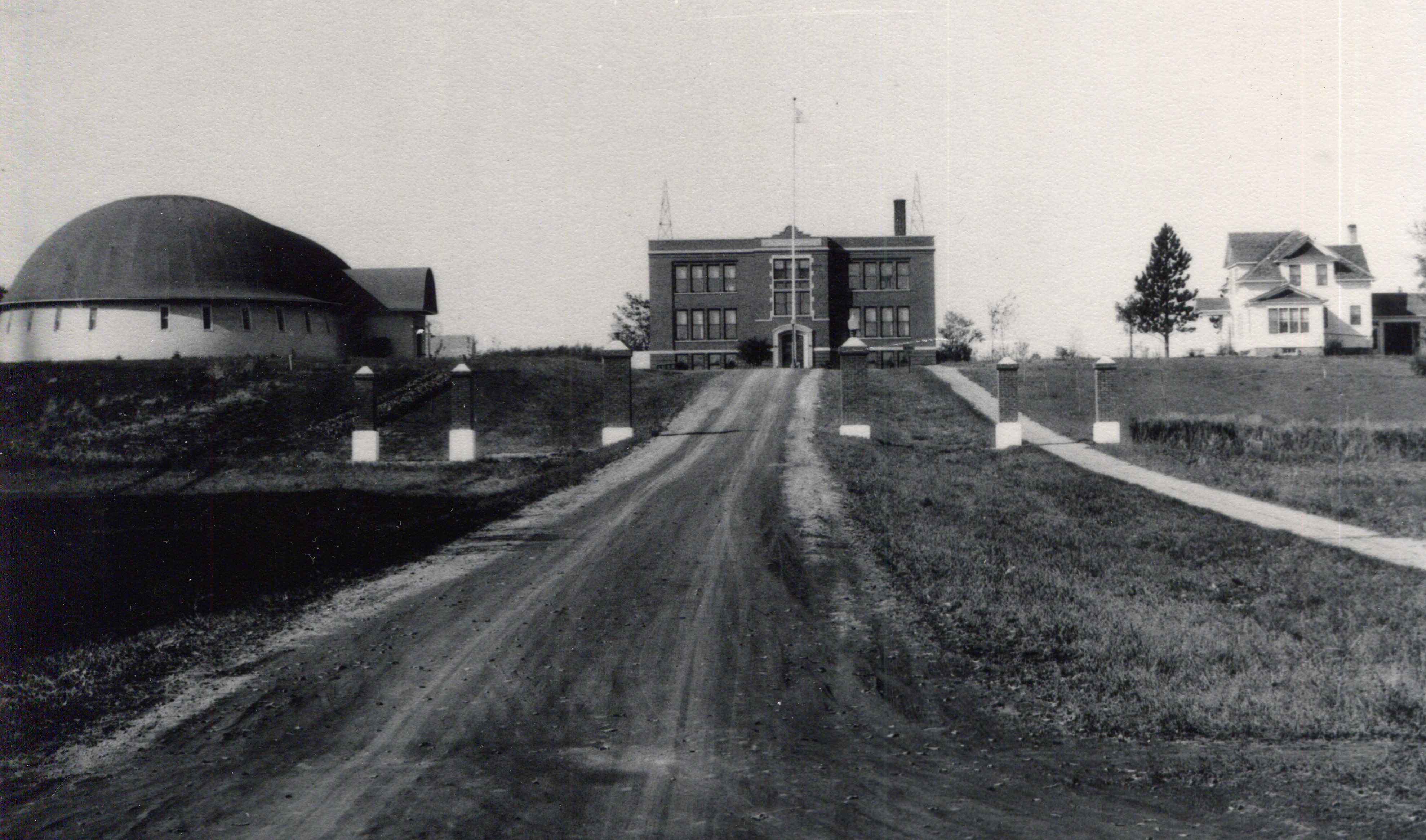 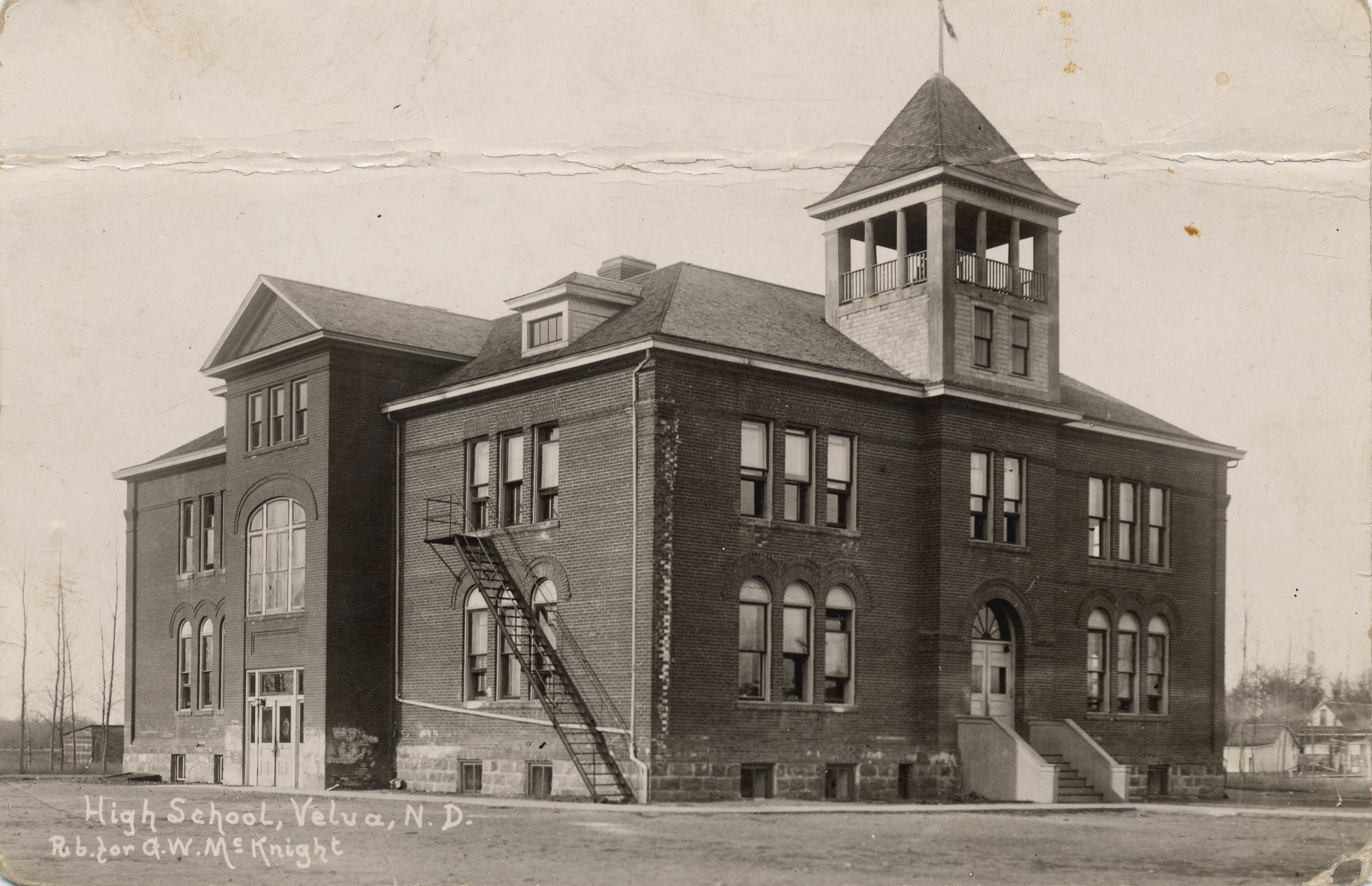 Image 3: The first Velva Agricultural High School was constructed in 1911-1912. Velva was designated as the site of one of the first five state agricultural high schools. Institute for Regional Studies re004411

Carrington dropped its agricultural high school after 1919, but the other schools received state funding until 1933. These dates are significant because of the difficulties all schools faced in these years. The influenza epidemic struck North Dakota in 1918. Schools closed to prevent the spread of this deadly outbreak of flu, and many parents kept their children at home. In 1917 and 1918, many young men enlisted in armed services because of World War I. Enlistments drew young men from the upper high school grades.

In 1933, the United States was in the midst of an economic depression and a severe drought that had a major impact on North Dakota. The state budget was cut drastically in the face of declining revenues. Schools released faculty and struggled to remain open.

Around 1906, formal courses in agriculture became part of the high school curriculum in many states. When the North Dakota legislature funded agricultural high schools, it was part of a growing national movement. A report published in the 1912 Yearbook of Agriculture (published by the U.S. Department of Agriculture) noted that “More than 2,000 public high schools in the United States are now teaching agriculture, 16 years ago there was not one.” In that year, 2,600 high schools in the United States were offering courses in agriculture. North Dakota’s law limited the number of high schools that could receive state support because of the low population and great distances between towns.

Image 5: Students at Velva Agricultural High School had pencils engraved with the name of their school indicating that students and communities took great pride in their schools. This pencil belonged to Clayton Howe who kept it as a souvenir of his school days. Courtesy, Neil Howe

More than simply providing vocational training, agricultural high schools provided an important service to their communities, counties, and the state. 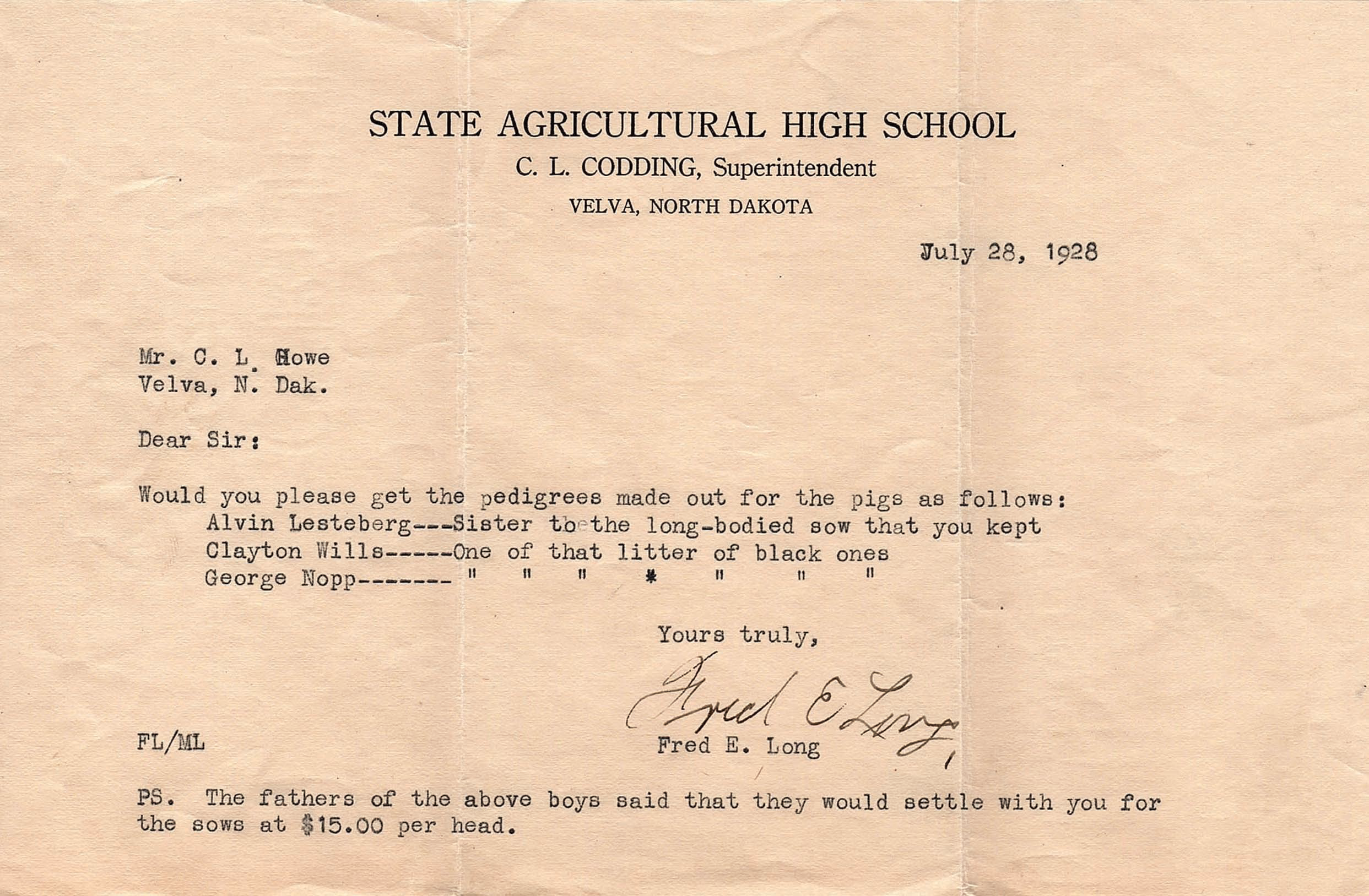 They strengthened the local and state economy by educating farmers, school teachers, and homemakers in the most advanced methods of their day. They also provided local farmers with agricultural short courses and expertise on many topics while serving as a rural cultural center. Today, some of the remaining school buildings still bear the imprint of their start as an agricultural high school but serve today as a high school of general education. 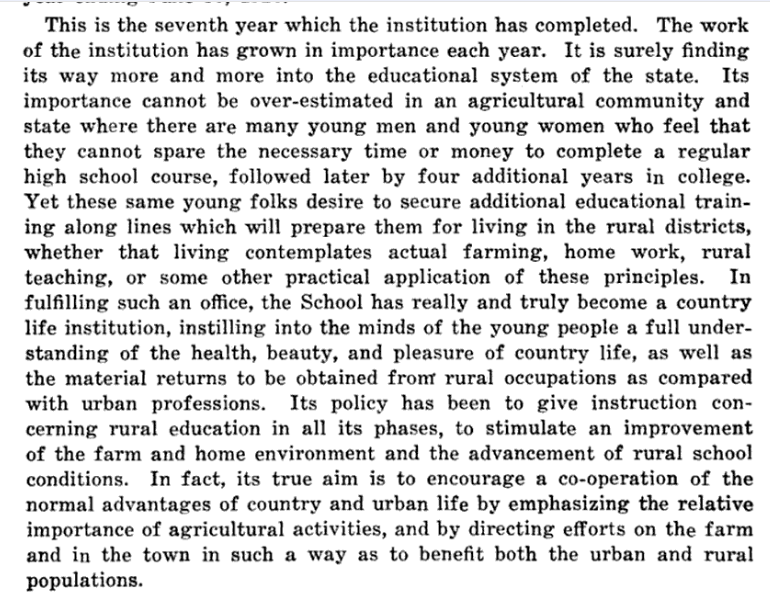 Why is this important? In establishing agricultural education in North Dakota schools, the legislature was both following a national trend and responding to the state’s economic and educational needs. The state economy depended on agriculture, and twentieth-century agriculture required well-educated practitioners and leaders. The seven agricultural high schools were scattered around the state so that the students could contribute to the advance of scientific agriculture under the varying conditions of the state’s regions.

Image 1: BCATS students were very loyal to their school. Items such as this sports pennant helped the students and county residents identify with the school. SHSND2015.88.21

The Maddock Commercial Club saw great potential in the project. They secured signatures of three hundred county residents on a new petition. The county commissioners now accepted that the people of Benson County were interested in establishing a high school under the 1911 law. The proposal was submitted to the voters on November 5, 1912. The voters approved and the county commission was charged with raising $20,000 to build and equip the school.

The school would provide courses in agriculture to prepare students to enter the agricultural program at North Dakota Agricultural College (NDAC, now NDSU). Their preparations included general high school courses in addition to agriculture. There would also be courses in homemaking, or domestic science as it was called then, and teacher training. 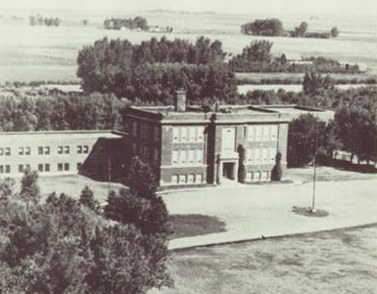 Image 2: BCATS high school with its 1948 addition (left side) which expanded classrooms and provided housing for boys. The Bobcat (yearbook), 1961

The Benson County commissioners appointed a board of trustees for the school. Each trustee was from a different part of the county. The county superintendent of schools, Effie D. Hoadley was also a member of the board.

The town of Maddock wanted the school to be built within its limits. So did Leeds, Brinsmade, Minnewaukan, Oberon, and Baker. Each town submitted a bid in the form of cash and a deed to land on which the school would be built. Maddock’s bid included $22,000 collected from the businessmen of the town and nearby farmers in addition to a deed to 40 acres of land. Maddock’s bid was by far the highest dollar amount, but the county commissioners had an obligation to consider every bid. The people of each of these towns knew that the school would bring prosperity to the community where it would be built. 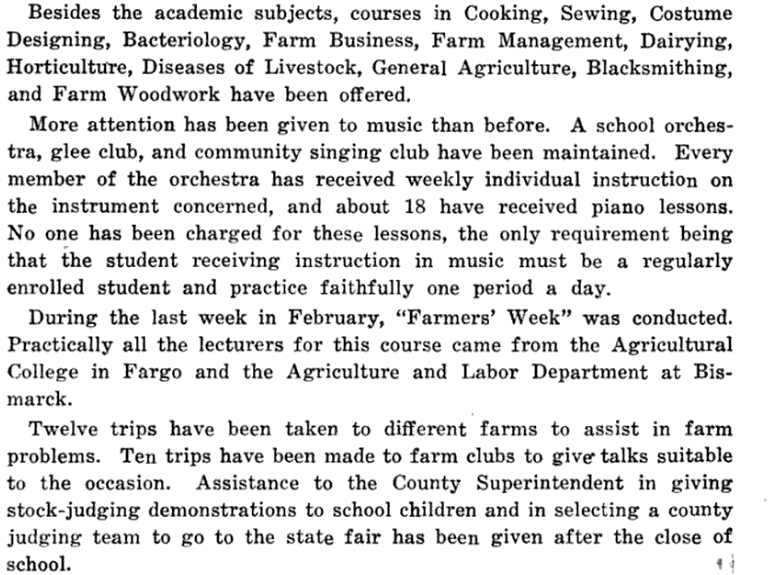 When the Benson County Board of Commissioners convened to consider the bids and choose a location for the school, each commissioner voted for his own town’s bid. Finally, after 83 ballots, at 1:30 in the morning, three of the five commissioners voted for Maddock. The process of locating the Benson County Agricultural and Training School revealed all the weaknesses and wonders of grassroots democracy, but representatives of the people made the decision and the school would soon be constructed in Maddock.

The Board of Trustees visited schools in Minnesota and Wisconsin to learn more about school architecture. They hired W. J. Edwards of Grand forks to design the building. His plans called for a building that would be 46 feet by 86 feet and two stories high with a functional basement for classrooms or shops at a cost of $32,800. Before construction began, they hired a man to dig a well on the school grounds.

The cornerstone for the school was laid on October 4, 1913. It was a very festive occasion. For four days in advance, 26 decorated vehicles (floats) and a band traveled through Benson County towns. The residents of each town were invited to Maddock to attend the laying of the cornerstone. On a windy Saturday, people filled the Maddock Opera House to the limit. Dignitaries spoke from the stage about the importance of “practical farming.” Governor Louis B. Hanna dedicated the building and noted that BCATS was one of the first agricultural high schools in the state. The crowd then moved to the school grounds where the governor, using a special trowel, laid the first stones for the school. The cornerstone contained a history of the United States, the 1911 North Dakota Blue Book, copies of Benson County newspapers, a list of the donors to the school, coins, a program of the day’s events, the names of the trustees, and the names of the county commissioners. 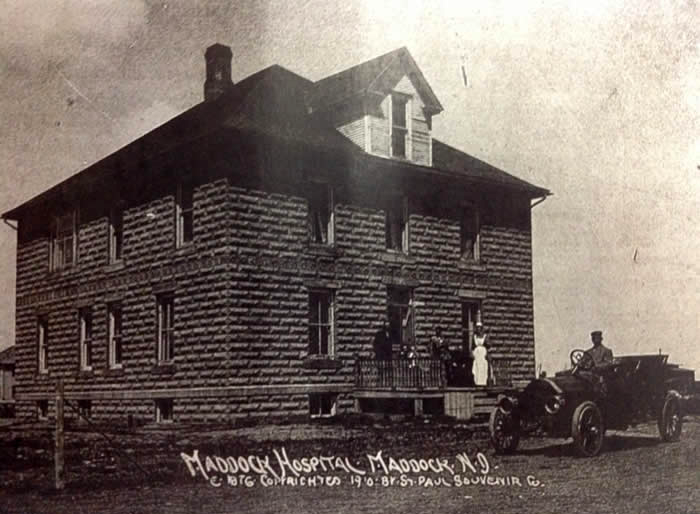 Image 3: The school purchased the former Maddock hospital, built in 1906, to serve as a dormitory for female students

Students began attending BCATS in the fall of 1914. Seventy-six students comprised the opening class; most were from farms. The Benson County school, like the other agricultural schools in the state, not only taught agricultural, domestic science, and normal (teaching) courses, it helped area farmers learn new methods and solve problems of agricultural production. During summer, students undertook projects on their home farms.

Because many students were not from Maddock, the school tried to provide housing. Boys lived in a building the school rented until 1948 when a wing was added to the school which included a boy’s dorm on the second floor. In 1922, the board of trustees purchased the former Maddock Hospital (built in 1906) to house girls.

Benson County Agricultural and Training School underwent many changes over the years. During the 1930s, BCATS had to cut salaries and positions, but was able to remain open. The school admitted American Indian students from Fort Totten (today this reservation is called Spirit Lake) and Turtle Mountain reservations in the 1930s and again in the 1950s. The curriculum expanded to a full four-year course of study in both Agriculture and Home Economics (formerly called Domestic Science). Business courses were added to the curriculum. The faculty expanded from four to nine teachers.

BCATS was much like any other high school. Students produced plays, a school paper, and a yearbook. They had sports teams and a band. Between 1918 and 1954, 1,062 students graduated. However, in 1966, the school building and grounds was purchased by the Maddock Public School system. In 1968, the old agricultural high school was re-assigned as a public school for all Maddock students in kindergarten through twelfth grades. In June, 1969, the old high school was torn down. Maddock continues as a high school with vocational agriculture courses and a vigorous Future Farmers of America program. 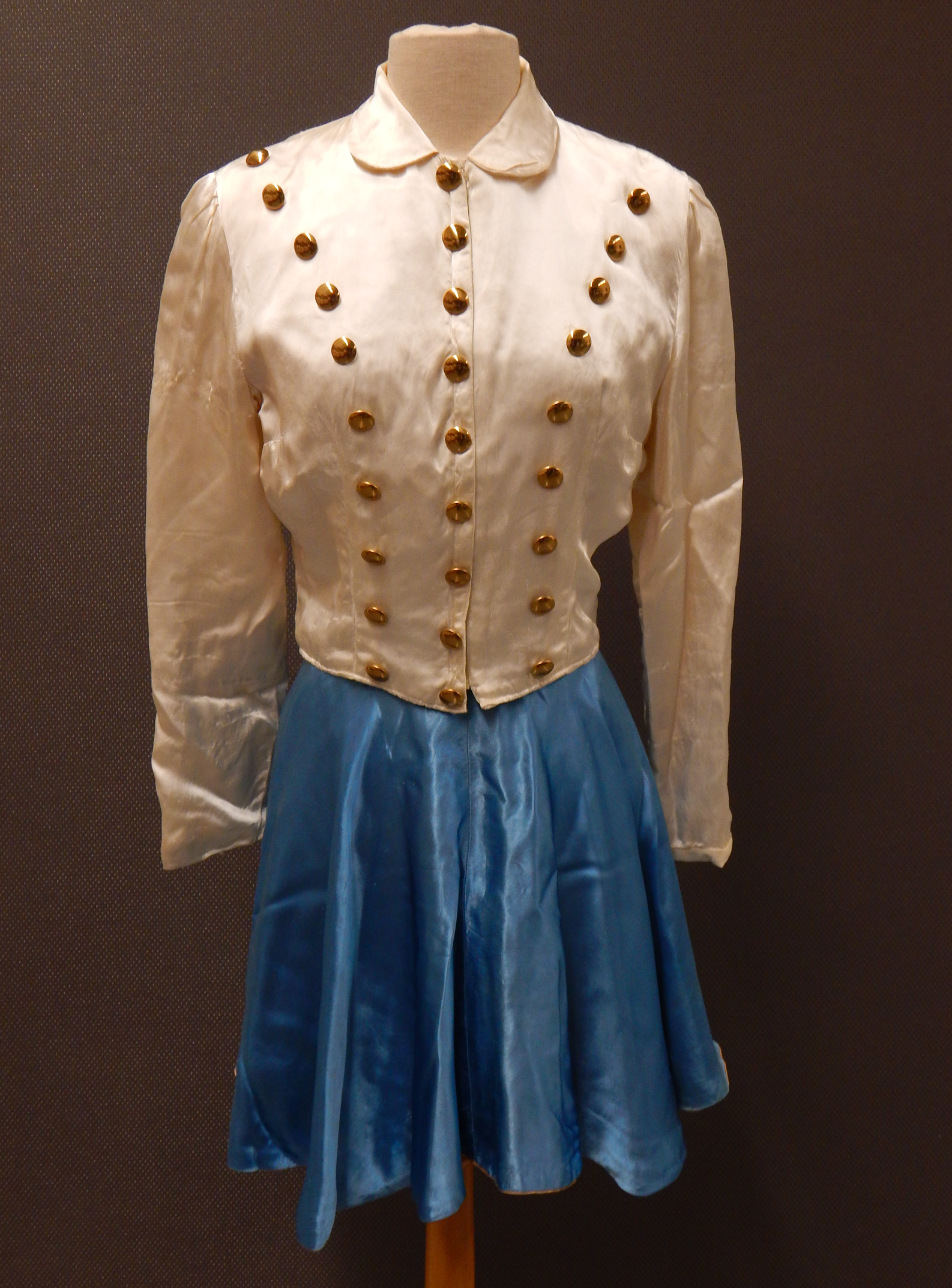 Image 5: Although BCATS was an agricultural high school it had sports teams, bands, and other extra-curricular activities. Majorettes usually marched in front of the band. This majorette uniform was made by a student (or her mother) SHSND 2018.38