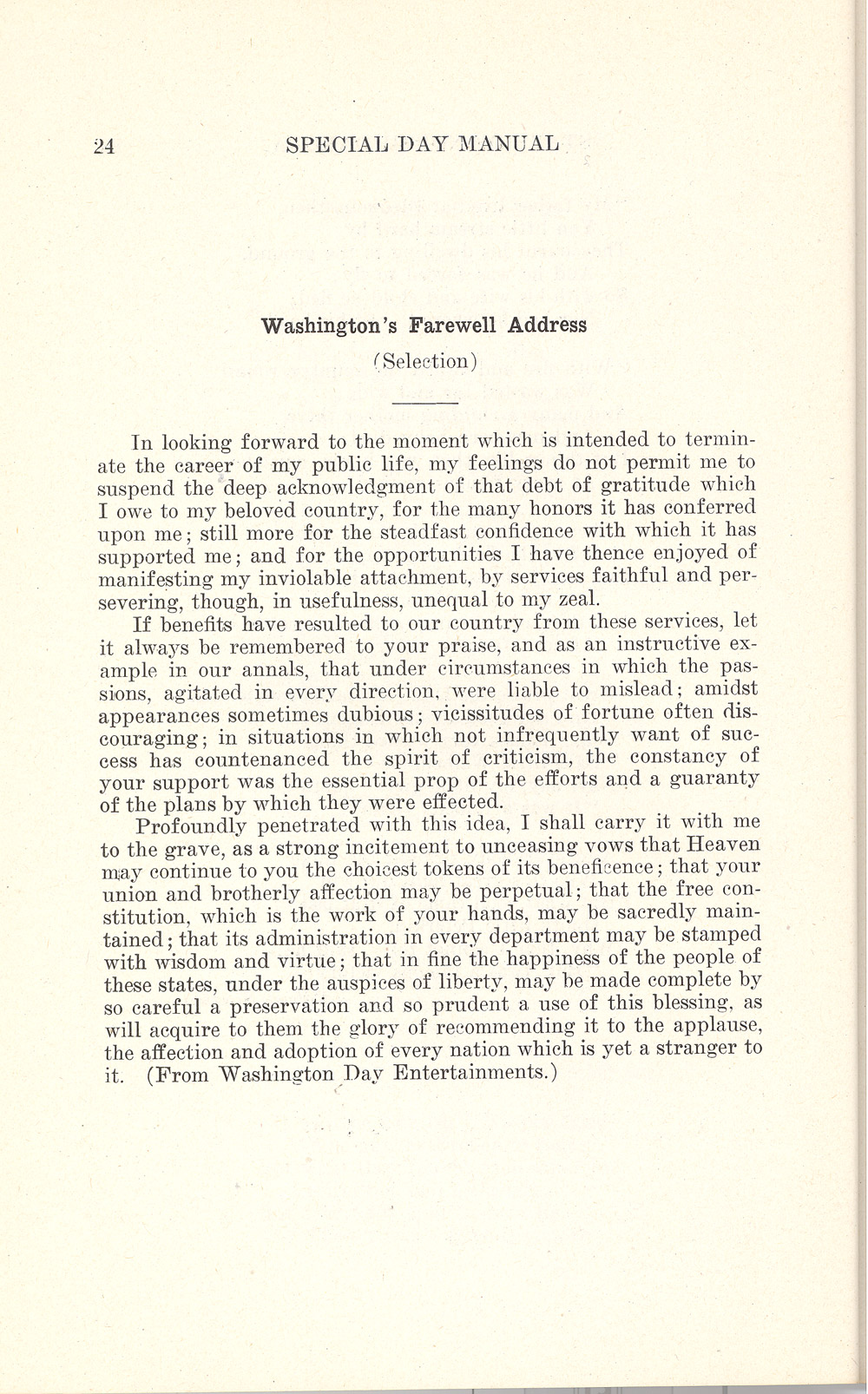 Document 17: In 1915, the State Superintendent of Public Instruction sent a booklet to every school with suggestions for programs for George Washington’s birthday celebration. The booklet included important documents such as George Washington’s farewell address. 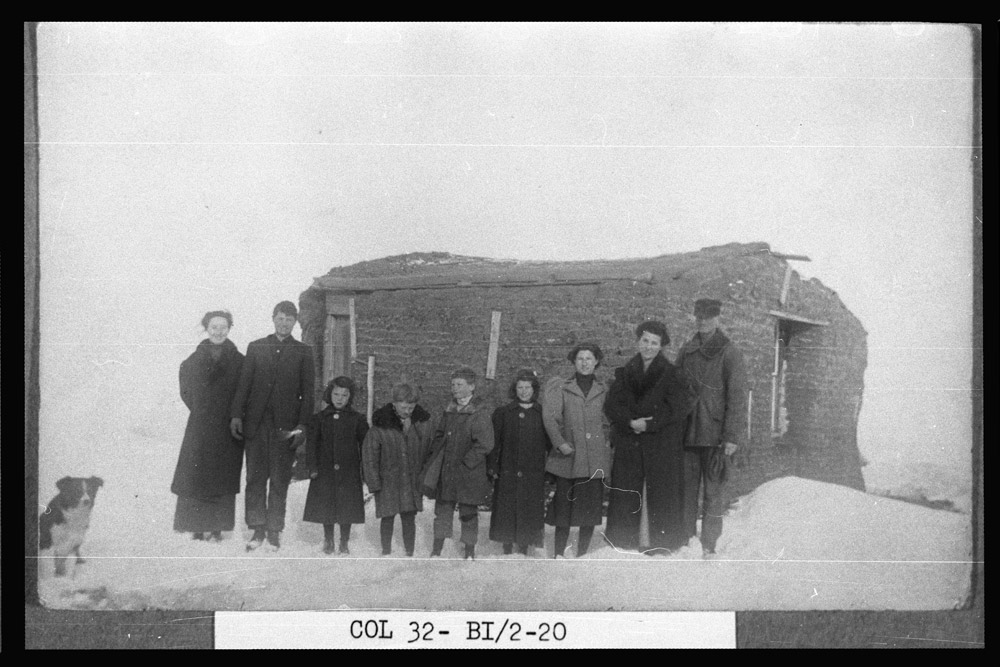 Image 4: Parents pose with their children at the Midway School in Billings County in 1911. Parents went to school for programs, for adult social events, and for elections. This sod school house may have been built as a house originally, and converted to a school later on. It appears to be in need of repair. SHSND 0032-BI-02-20 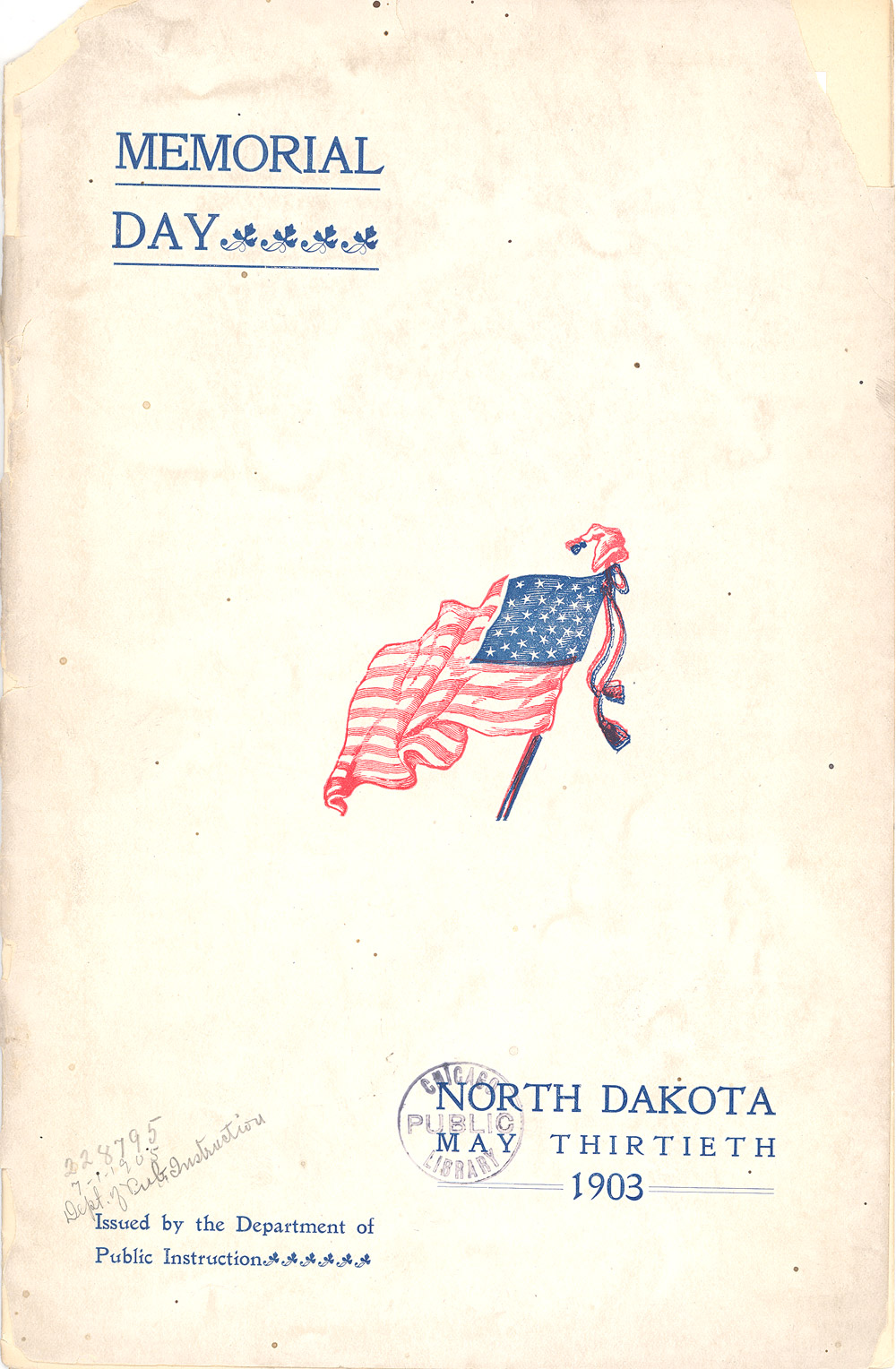 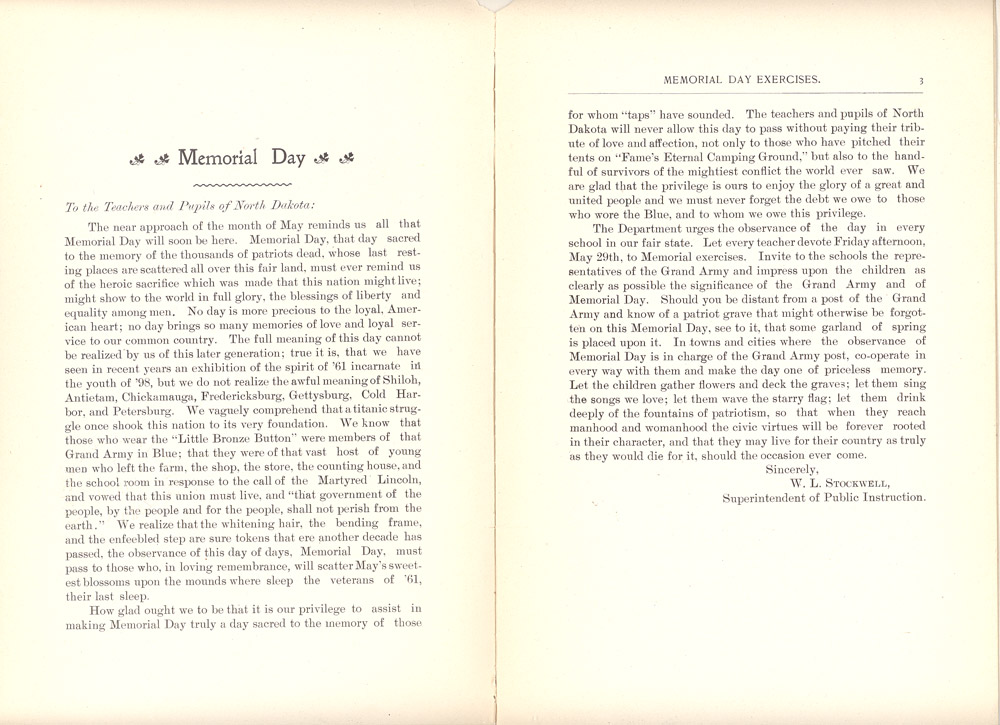 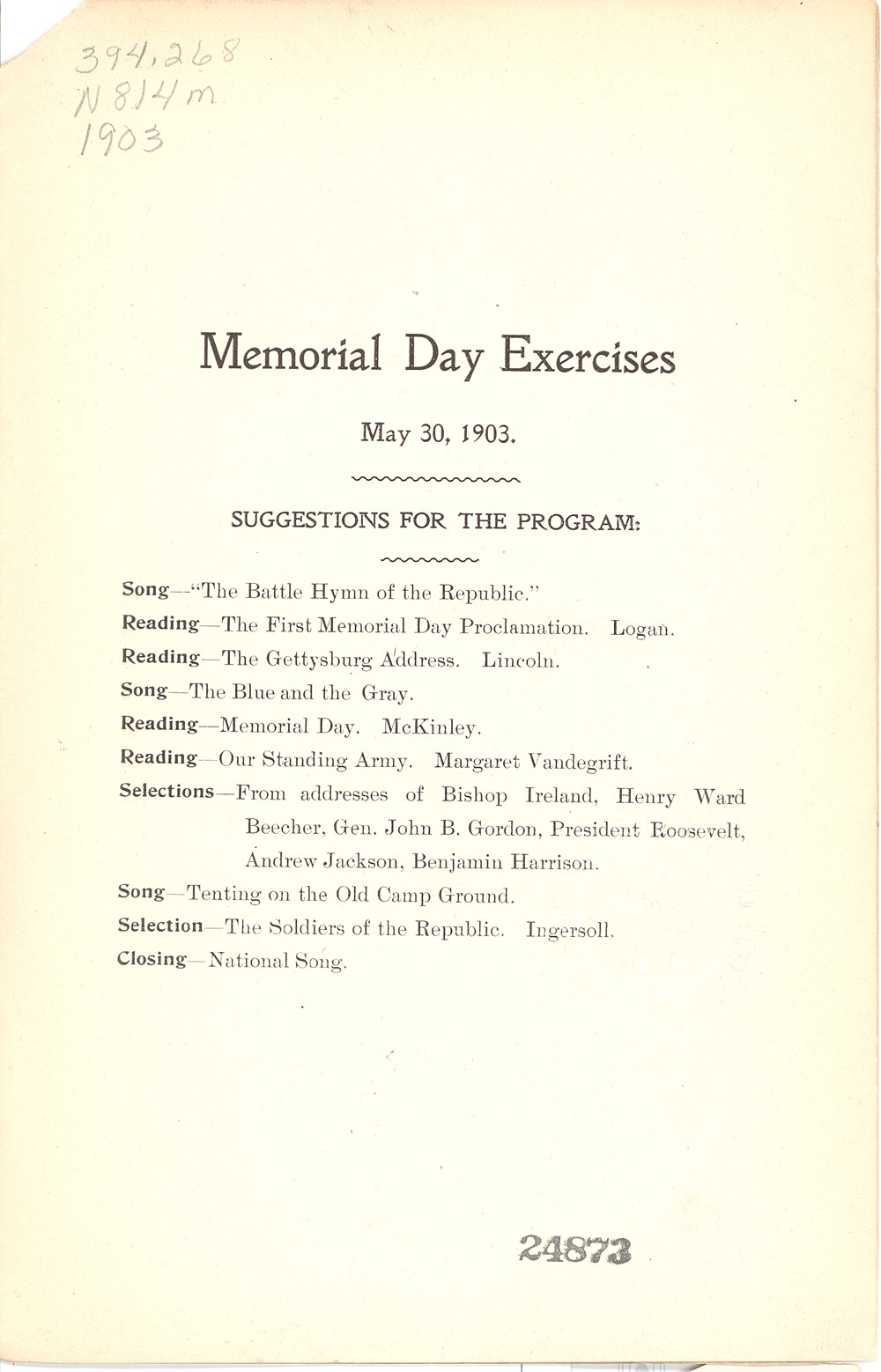 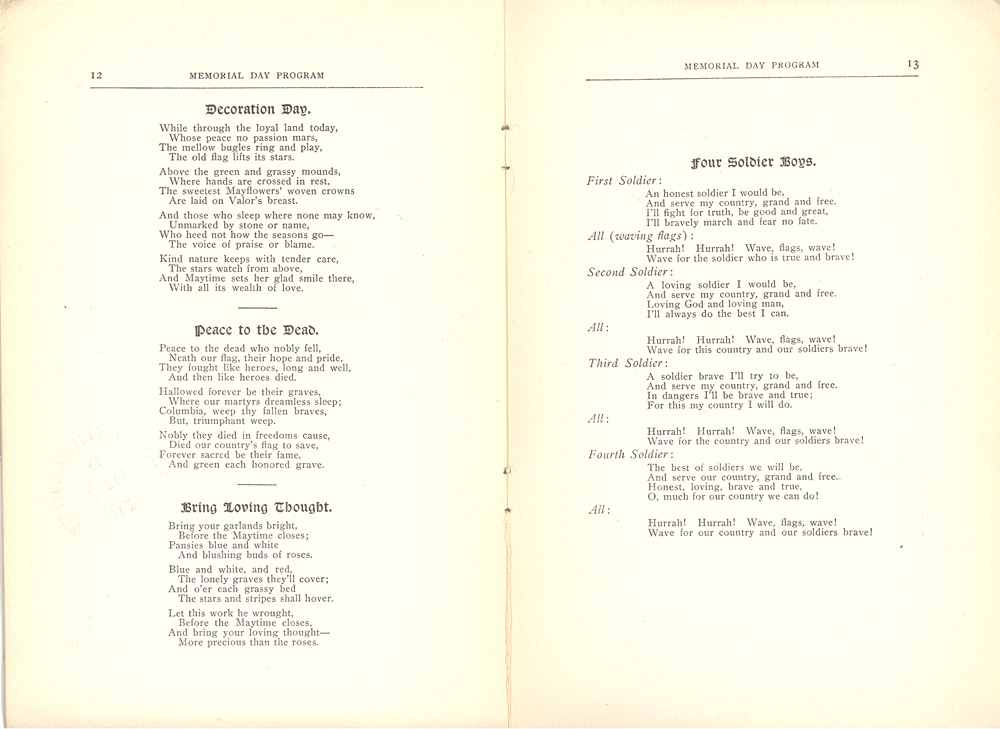 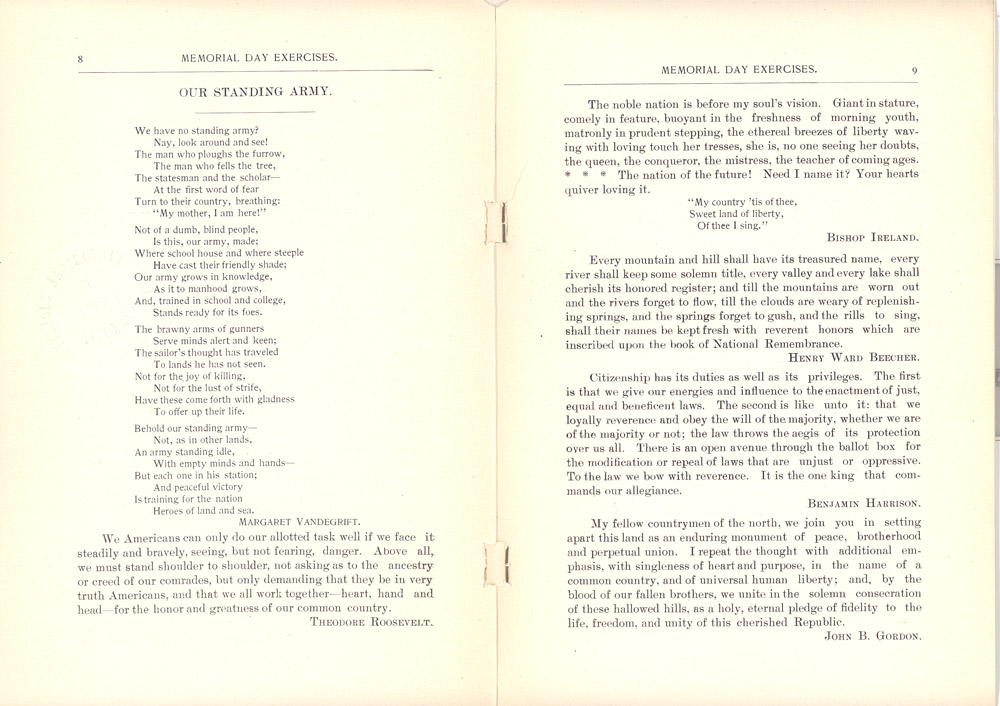 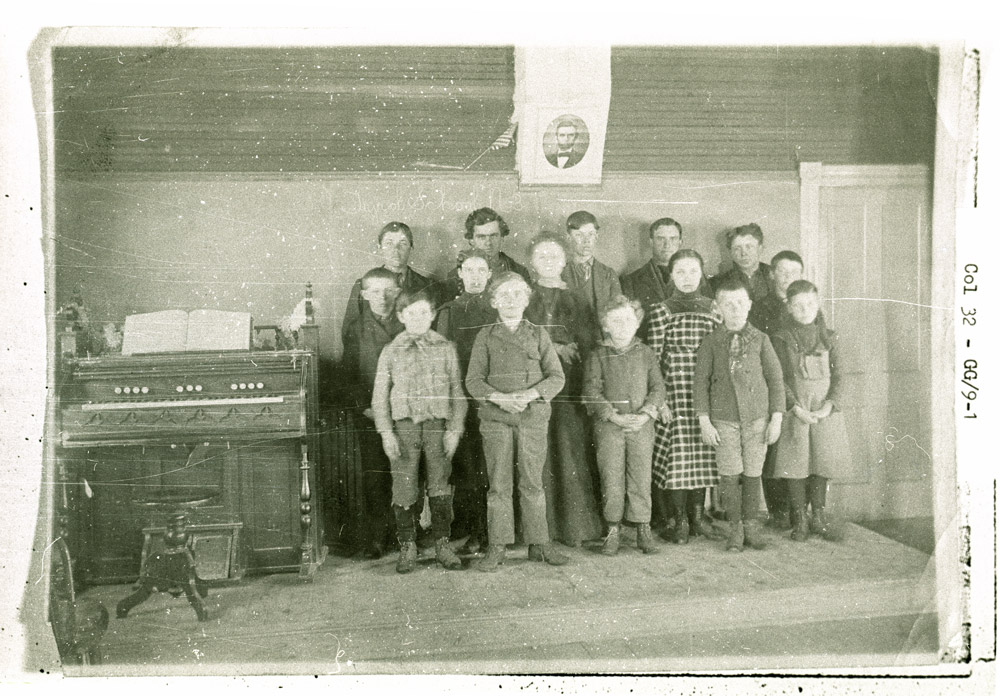 Image 5: School children posed for a photograph at Sansburn School in Griggs County beneath a picture of Abraham Lincoln. Students typically recited poems and speeches in programs for Abraham Lincon’s birthday and George Washington’s birthday. This group of students appears to have more boys than girls in attendance. SHSND 0032-GG-09-01 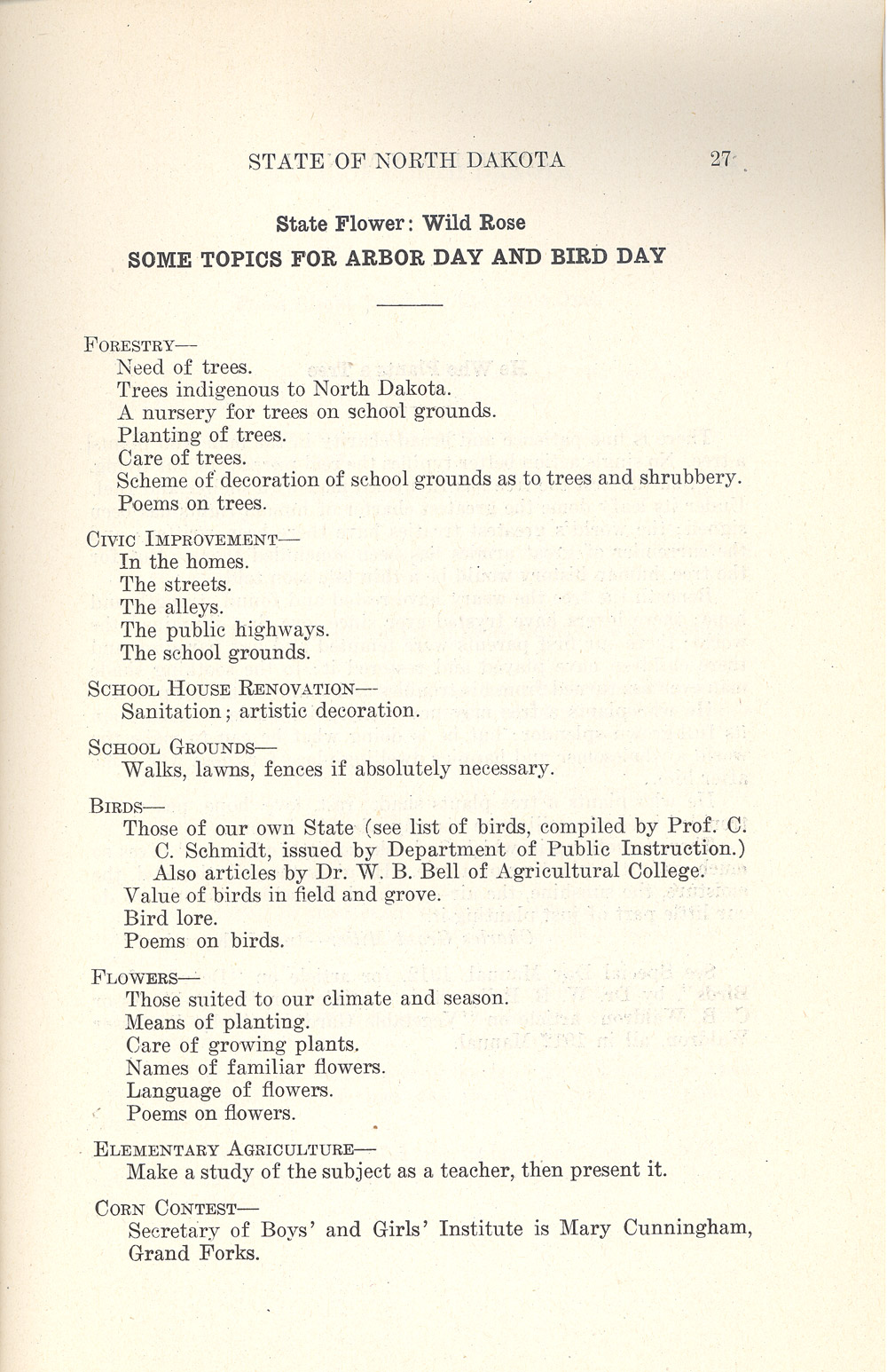 Document 19: Students celebrated Arbor Day every spring. The State Superintendent of Public Instruction sent booklets with suggestions for activities (such as counting trees on the school grounds) and poems and songs for recitation. Arbor Day was important during the years when state government encouraged people to plant more trees in North Dakota. It was also a day when children could spend a good part of the day outside. 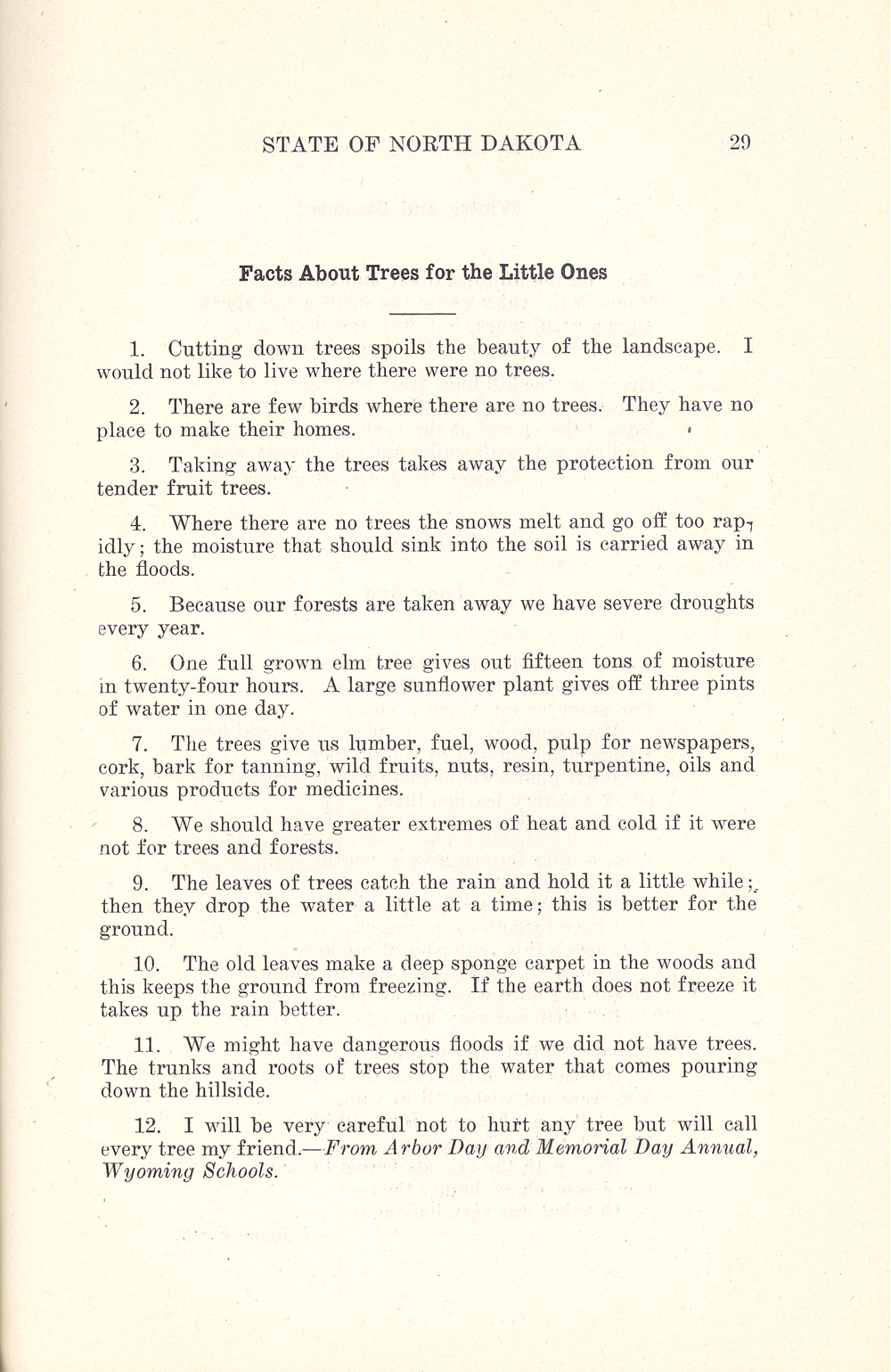 Document 20: On Arbor Day, children were encouraged to learn facts about trees. The booklet suggested activities that supported courses on the natural world. 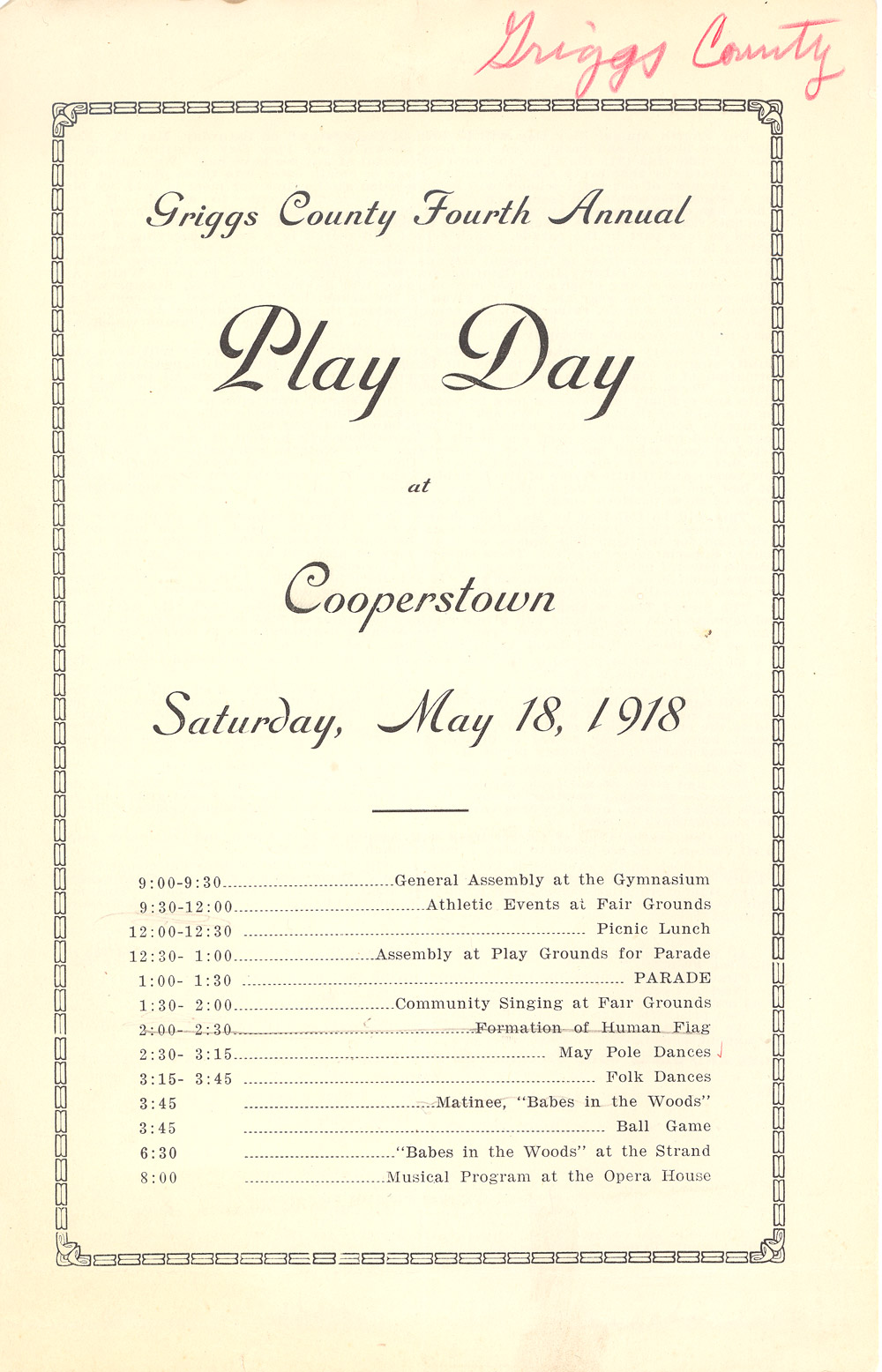 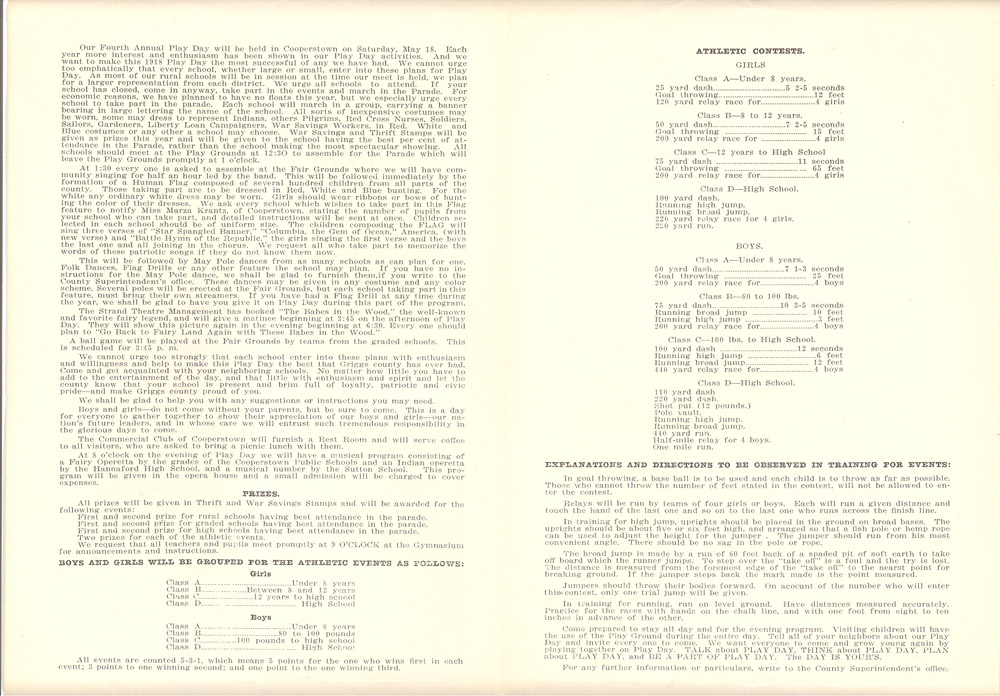 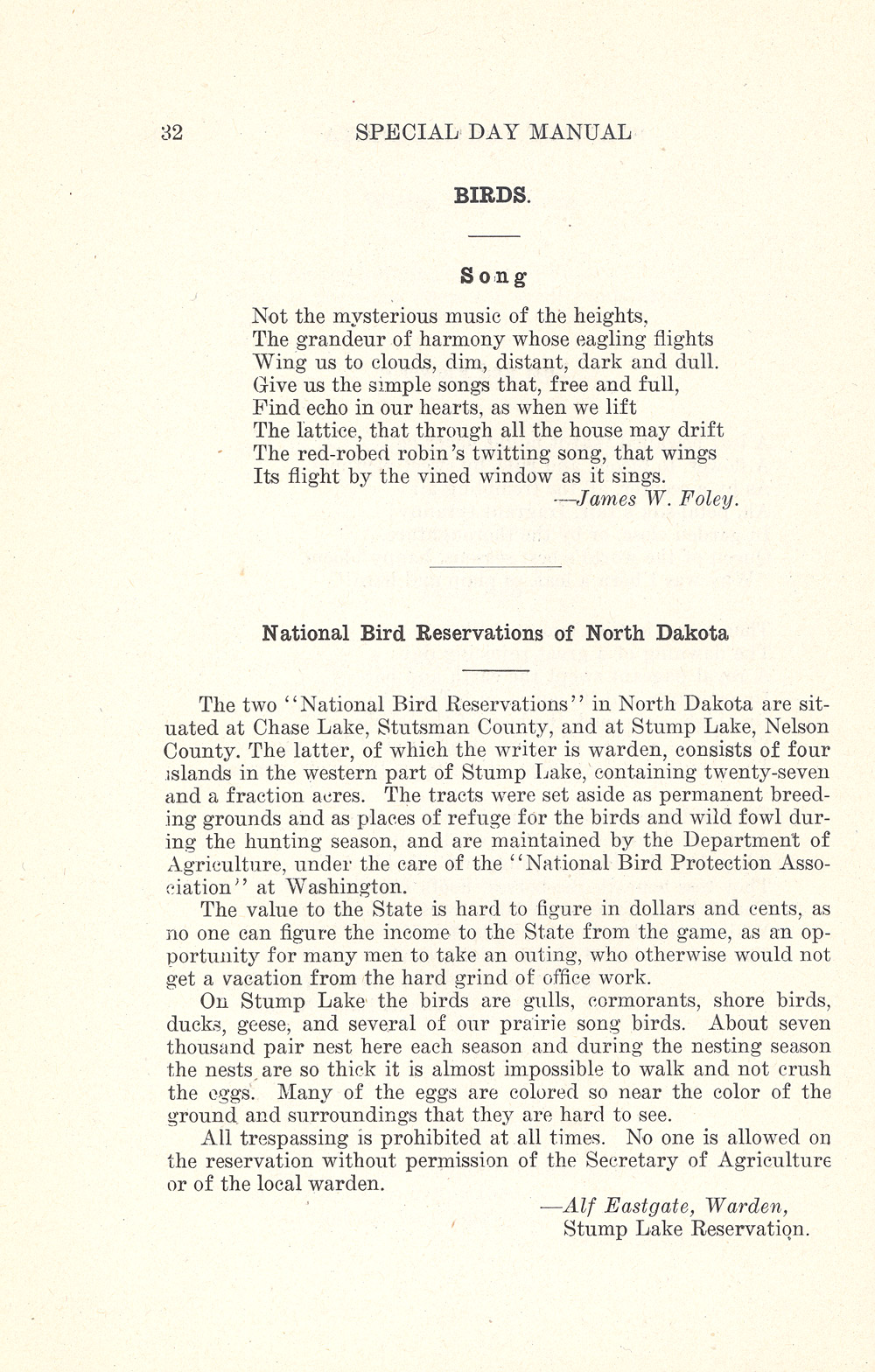 Document 21: Arbor Day activities included looking at the ways in which trees provided food and shelter for birds and other animals. James Foley was a favorite North Dakota poet. These pages are from the Arbor Day booklet of 1915. 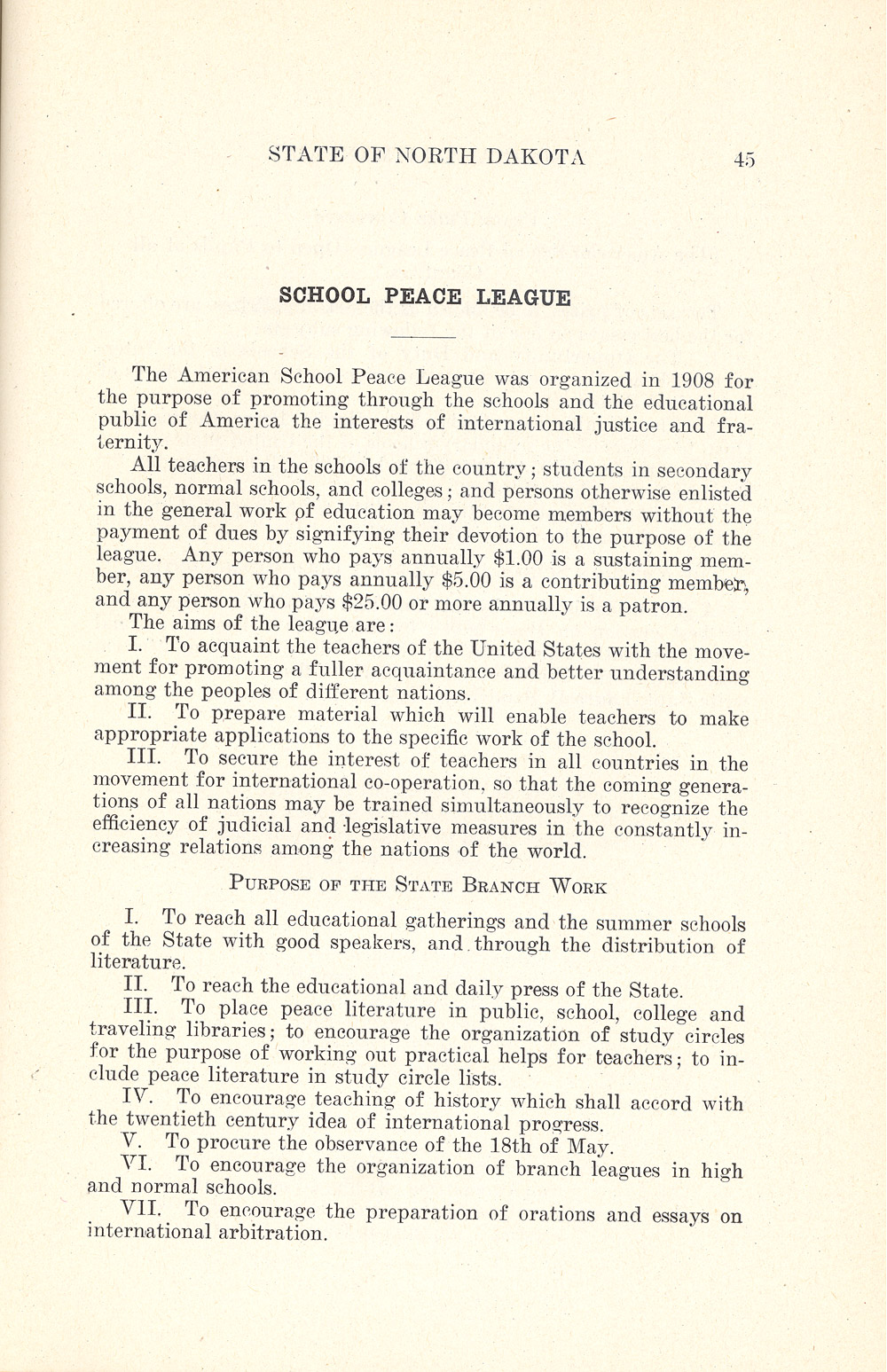 Document 22: The American School Peace League encouraged schools in every state to celebrate world peace. In North Dakota, the State Superintendent of Public Instruction sent a booklet to every school with suggestions on how to celebrate Peace Day. This page is from a Peace Day booklet of 1915. Europe had been at war since the summer of 1914, and most North Dakotans hoped that the United States would not enter the war. In an effort to maintain a peaceful relationship with all nations, North Dakota celebrated Peace Day.

Most schools also had a program for Christmas. If schools were still in session on May 30, they had a program to celebrate Memorial Day. (See Document 18.) With the exception of the Christmas program, these programs were designed to encourage patriotism and a thorough knowledge of American History. Schools were never closed for these celebrations.

Each year, the North Dakota Superintendent of Public Instruction sent to each city, town, and country school a pamphlet with ideas for programs. The programs included poems, songs, essays, and quotations from presidents and other important people. Sometimes there were small skits in which the children took roles. (See Image 5.) The best students were chosen to recite a piece they memorized for presentation. Sometimes children wore costumes for their presentations. The students’ ability to memorize and recite accurately was an important part of their education.

The same speeches and poems appear in most of the pamphlets from 1890 to 1918. In addition to presidential addresses, recitations also included popular poems such as “Our Standing Army” by Margaret Vandegrift and Walt Whitman’s poem on the death of Abraham Lincoln, “O Captain! My Captain!” Many of the recitation pieces are still considered fundamentally important documents in American History today.

Some schools also celebrated Arbor Day and Bird Day. (See Document 19.) These programs encouraged students to be aware of their environment. They counted trees in the school yard, and removed dead branches. (See Document 20.) They planted trees and shrubs. Students were taught that trees sheltered birds and other animals that were helpful to humans. (See Document 21.) Students learned about Chase Lake Bird Reservation near Medina which today is known as Chase Lake National Wildlife Refuge.

Before the United States entered the European war (World War I) in 1917, North Dakota schools celebrated Peace Day. (See Document 22.) Students were encouraged to think about peaceful international relations. In the 1920s, the state law added Temperance Day to students’ celebrations. On Temperance Day, students were taught about the consequences of drinking alcohol and warned to avoid using drugs.

Play Days were organized locally, not by the Department of Public Instruction. Play Days were popular events at most North Dakota schools. Some schools invited neighboring schools to attend. There were athletic contests, dances, and programs. At Cooperstown, in 1918, students were also treated to a silent film, “Babes in the Woods,” at the Strand movie theatre. (See Document 23)

Why is this important? School celebrations broke up the routine of studies. The ordinary school day was usually very carefully structured, so students welcomed special days. Memorial Day and Washington’s Birthday were not celebrated then as we do now with special sales and a day off from school.

School programs brought the community together. Adults admired the students’ work, but were also able to see how well the teachers were progressing with educational goals. Socializing at school events was a pleasant break from daily routines and gave people a chance to talk over important community issues. People who had emigrated from other countries also learned a lot about the important events of American history at school programs.

The Pledge of Allegiance

The Pledge of Allegiance was written in 1892 by Francis Bellamy (1855-1931) who believed that it could be used by people in countries all around the world.  He particularly wanted young people to learn to recite the pledge of allegiance.  Bellamy published the pledge and the salute to the flag in The Youth’s Companion (a magazine for young people) in 1892.

Originally, the pledge read this way:

I pledge allegiance to my Flag and the Republic for which it stands, one nation, indivisible, with liberty and justice for all. 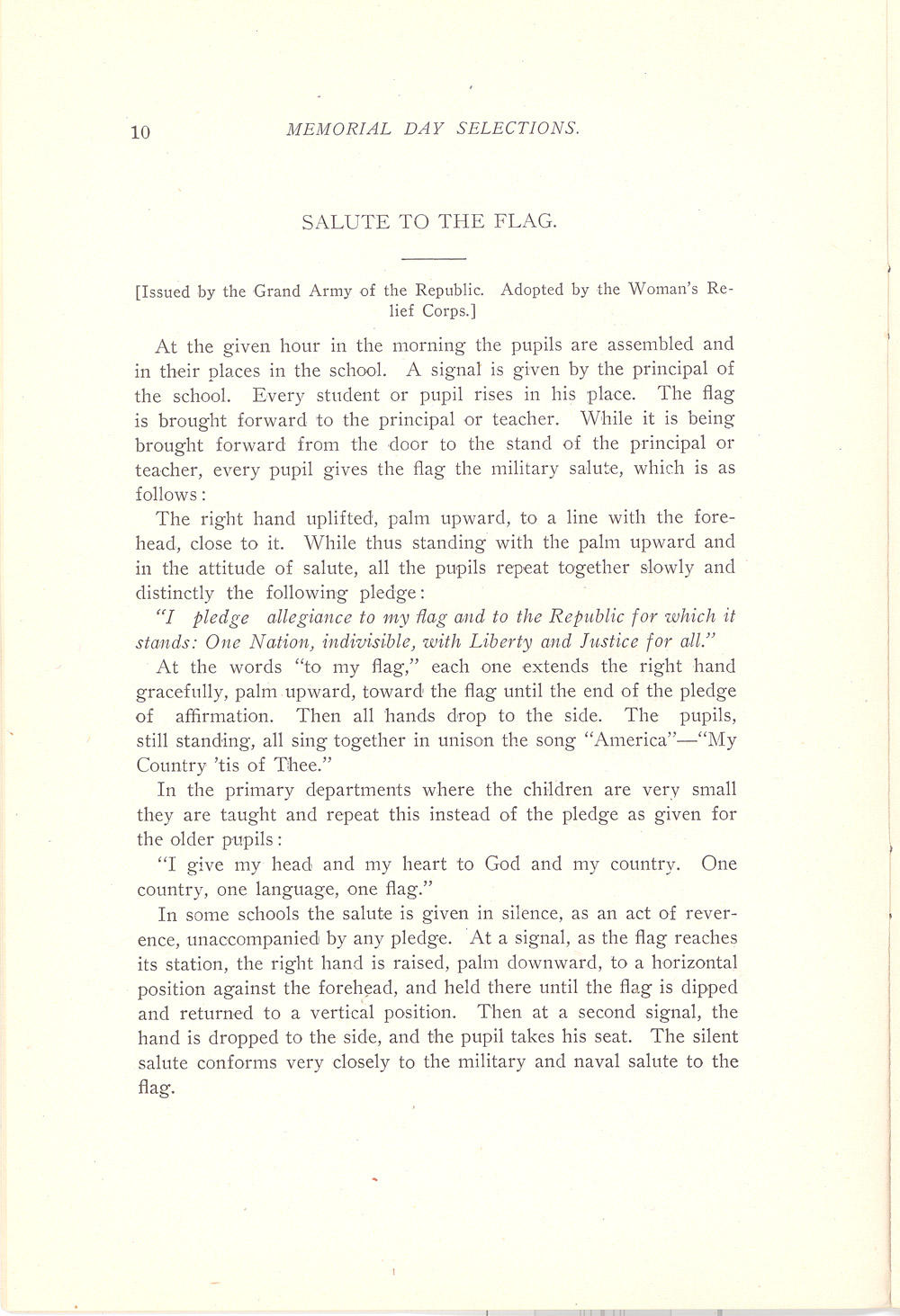 Document 24: The daily recitation of the Pledge of Allegiance was a new school requirement in North Dakota in 1905. In 1906, the State Superintendent of Public Instruction sent out a booklet describing to teachers how the Pledge should be recited.

Students were encouraged to face the flag, and offer a military salute (right hand lifted to the forehead with the palm down.)  Then, at the words, “my Flag,” the student extends the right hand forward, palm upward toward the flag and holds it there until the pledge is done.

A short while later, Bellamy changed the salute.  Students were to place their right hand over their heart until they said the words “to my Flag.”  At that point, the right arm was extended toward the flag with the palm down.  During World War II, this final gesture was eliminated because it resembled the German Nazi salute too closely.  The new gesture for the pledge was to recite with the right hand on the heart.

President Benjamin Harrison approved of the pledge and recommended it to schools and youth groups by 1893.  While North Dakota schools may have used the Pledge of Allegiance, it was not recommended as a part of patriotic celebrations until 1905. (See Document 24.)

Today, students place their hands over their heart and recite this Pledge of Allegiance:

I pledge allegiance to the flag of the United States of America, and to the republic for which it stands, one nation under God, indivisible, with liberty and justice for all.

Why is this important? Today, all children learn the Pledge of Allegiance, but it was new and unknown in North Dakota in 1893.  When the Pledge was adopted as part of the school day, it was considered a good idea, but not terribly important.  The Pledge of Allegiance has become more important to all Americans over the past century.  The Pledge has come to stand for what we believe in, much as the United States flag does.