When vocational agriculture students from around the country met in Kansas City for the National Livestock Judging Contest in 1928, they discovered they had a common interest in forming a national organization. Thirty-three students from 18 states established the Future Farmers of America (FFA) to provide leadership training and agricultural experience for farm boys. The boys elected officers and set annual dues at 10 cents.

Members of Future Farmers of America chapters had to be enrolled in vocational agriculture courses in their schools. They could continue their membership until they reached the age of 21. While adults served on state and national boards of directors to help guide the organization, the Board of National Student Officers met in advance of the adults to discuss the students’ position on various decisions and make recommendations to the board. Young members of the FFA learned leadership skills through experience with the local chapter, the state meetings, and the national convention. (See Document 8.)

I first joined the Velva Chapter of the Future Farmers of America (FFA) as a high school freshman in 1967 and continued as a member until my freshman year in college – 1971. I have many fond memories of being a FFA member and believe my experiences in this organization left lasting impressions on my life.

To me, FFA meant more than just agricultural education. It also meant leadership, responsibility, citizenship, and honor. From reciting the FFA Creed and achieving my “Greenhand” award as a freshman to earning the “State Farmer” Degree in 1970, FFA was a major part of my high school life.

During the year, FFA members toiled at various individual and chapter projects. Coming from a third-generation dairy farm family, I had dairy cattle/milk production as my project. This project also helped me earn my State Farmer degree in 1970. At the award ceremony at NDSU, my Dad showed great pride and reminded me that my Grandpa would also be very proud.

As a chapter member, I held two officer positions – Sentinel and Secretary. My first office was that of Sentinel. And just as I did for the opening of each meeting, I can still recite when I hear the call: Mr. Sentinel? “Here by the door. Through this door pass many friends of FFA. It is my duty to see that the door is open to our friends at all times and they are welcome.” For two years, I was the chapter secretary pledging to “Keep an accurate record of all meetings and correspond with other secretaries wherever corn is grown and FFA members meet.”

Each April, the chapter held its “Parent/Son” Banquet to recognize our parents and to present annual leadership awards. It was always well-attended and considerable pride was shown by the parents.

The highlight for many chapter members was attending the State FFA Convention on the NDSU campus in Fargo. The convention was always held the first week of June – and we anxiously awaited the end of school so we could attend the convention. For many of us – visiting a college campus and a larger city was a new experience. While at the convention, we would all actively participate in crop and animal judging contests, leadership competitions, and general sessions. The state convention was a show time and it was always so impressive to observe the “sea of blue jackets” everywhere.

When we gathered at the historic Festival Hall on the NDSU campus, you could bet that jackets were zipped, white shirts and matching blue ties were always neat and sharp, and we would be on our best behavior. It was a rare occasion to be reminded of the dress code or our responsibility to the organization. It most cases, it only took a slight stare or glance from one of the chapter advisors-—you simply didn’t want to deal with the consequences of wearing a colored shirt or not wearing your necktie. It was about respect and reputation.

Parliamentary procedure is omnipresent for FFA members. There are expectations that all members will become proficient parliamentarians and it is practiced during every meeting. From the opening ceremony of each chapter meeting – to district leadership competitions – to the state convention, parliamentary procedure is the rule of the day. For me, it was a life lesson and one I try to practice whenever possible.

My memories of FFA are obvious. Whenever the organization is mentioned in conversation, I tend to chime-in and share the times I had in this fine organization.

Document 8: A former FFA member, Neil Howe, credits his experience with FFA clubs and projects for giving him a strong foundation for his later career as a teacher, principal, and leader of North Dakota Studies. Courtesy, Neil Howe. 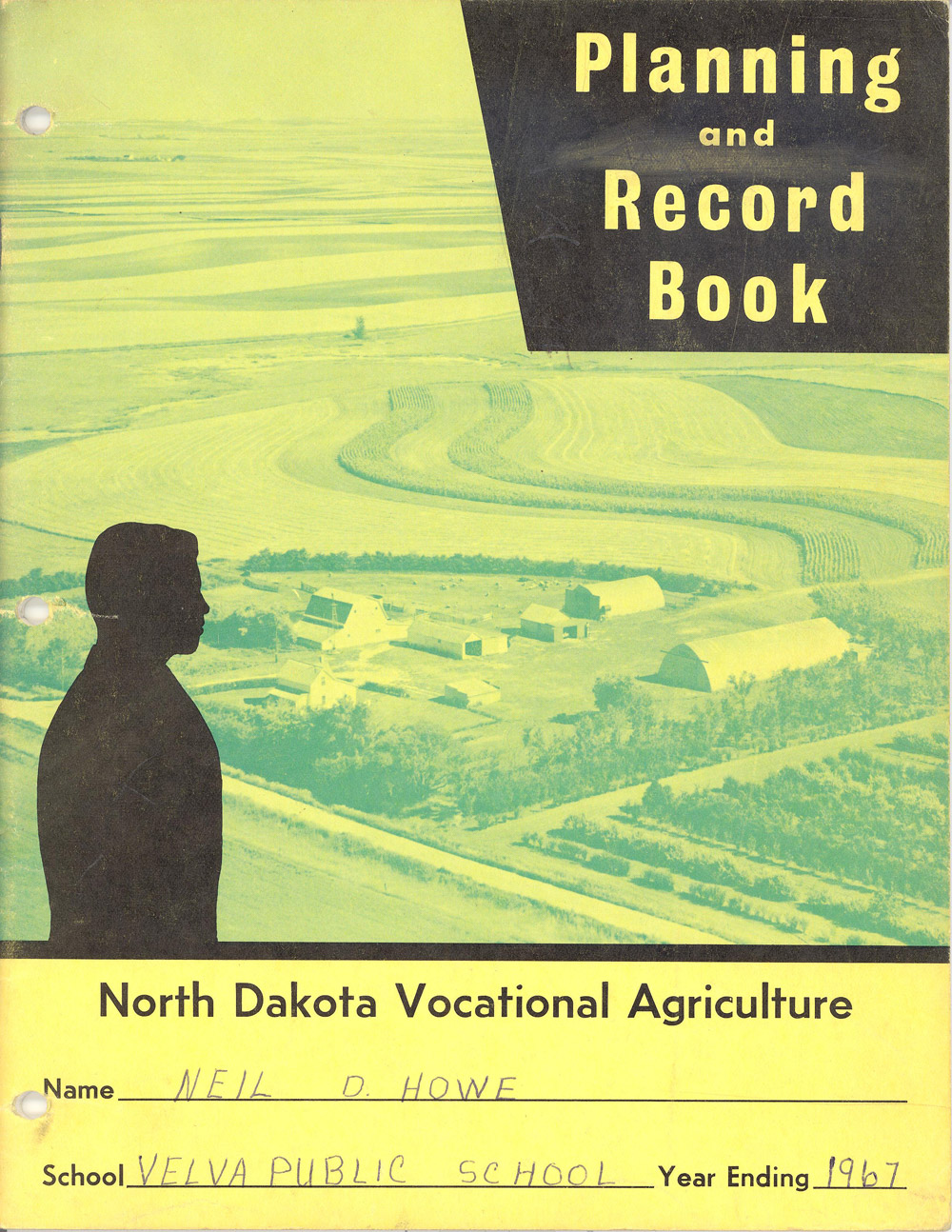 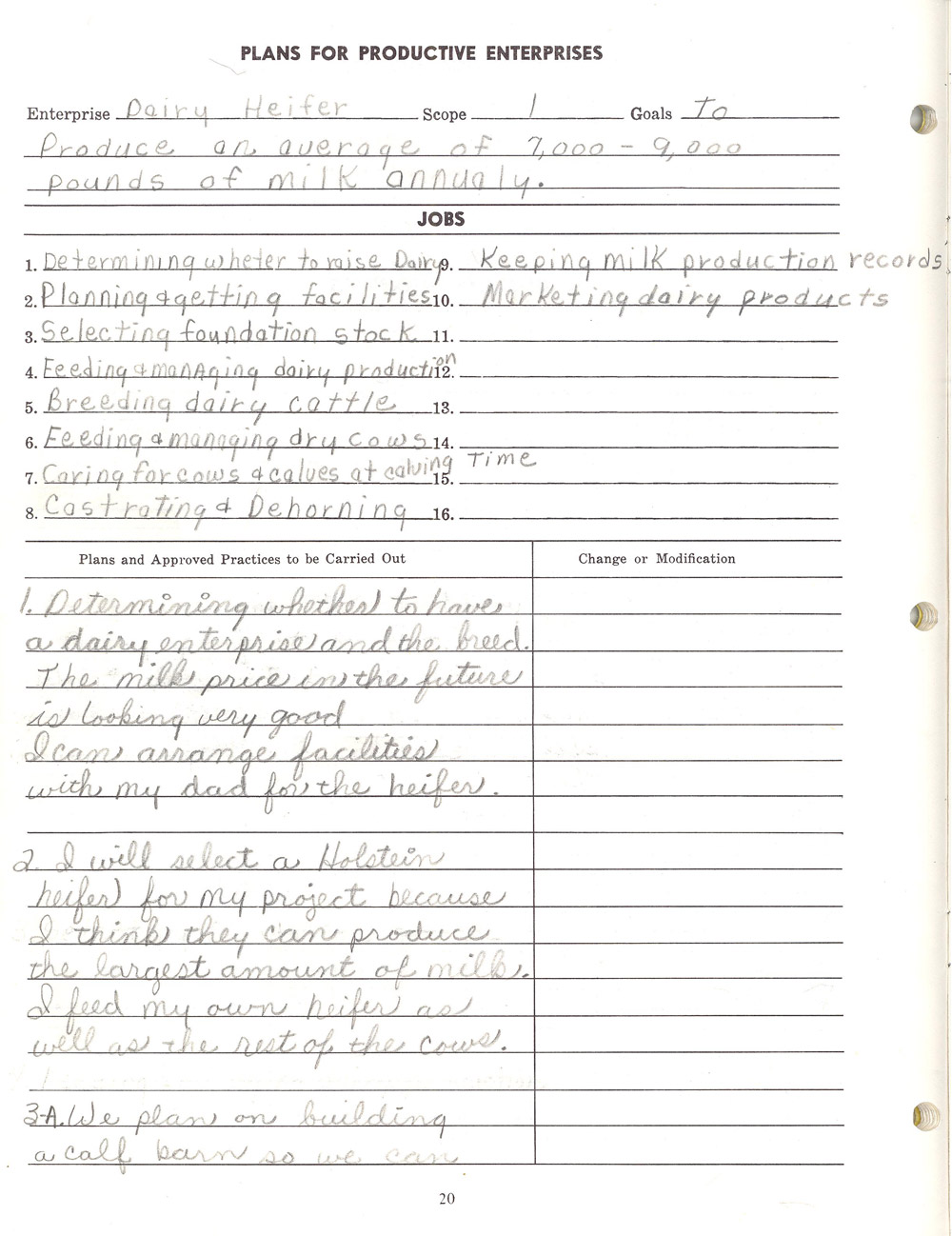 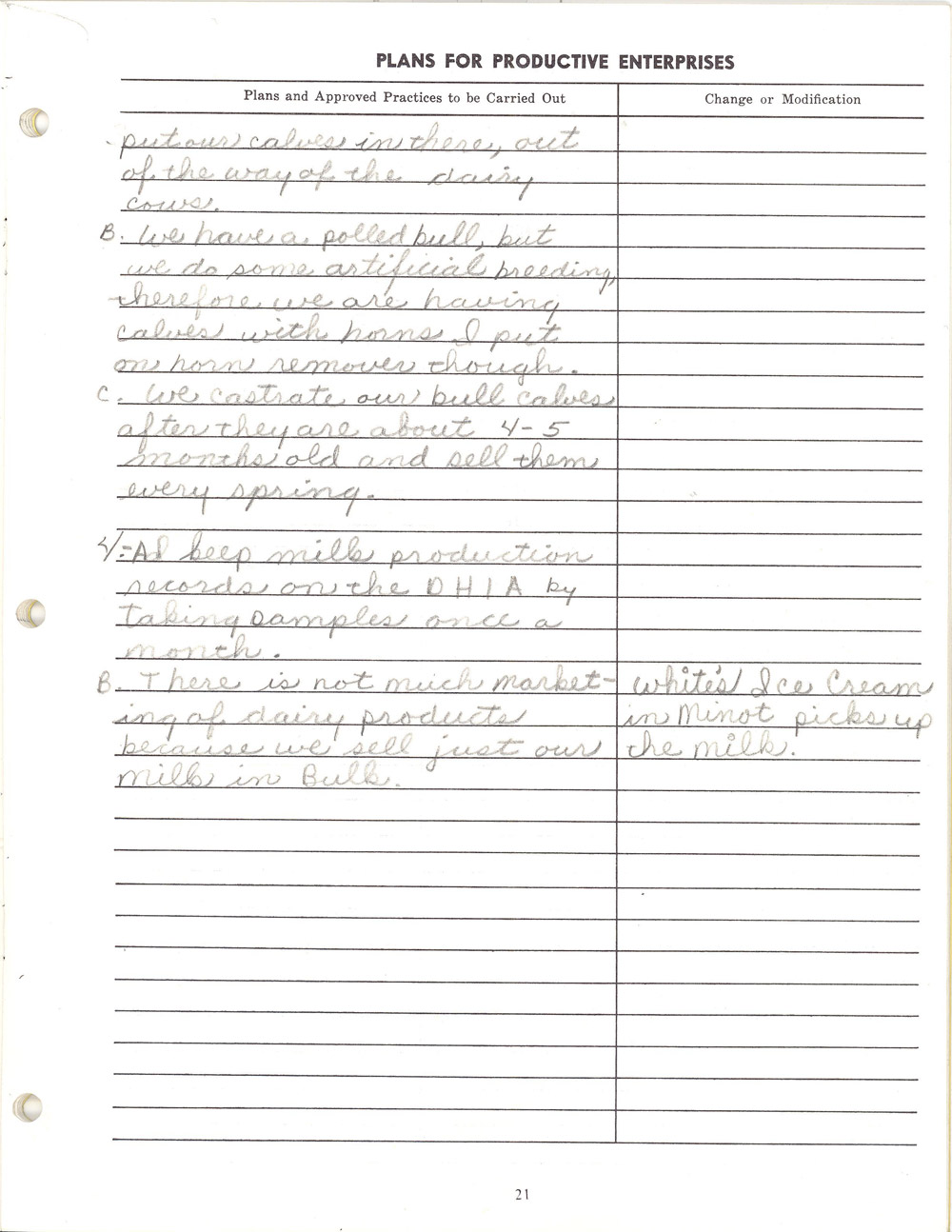 Image 3: FFA state convention met at North Dakota State University in June every year. Every chapter in the state sent representatives to the convention. Members participated in many events including livestock judging, crop judging, and leadership events. Courtesy Neil Howe.

In 1930, girls were officially excluded from the national organization, but could participate at the state and local level. However, few girls in North Dakota chose to join FFA. (See Image 3.) African American boys had a separate organization called the New Farmers of America. Eventually both groups joined the national FFA: African American boys (50,000 of them) were welcomed to the FFA in 1965; girls gained full membership in 1969. 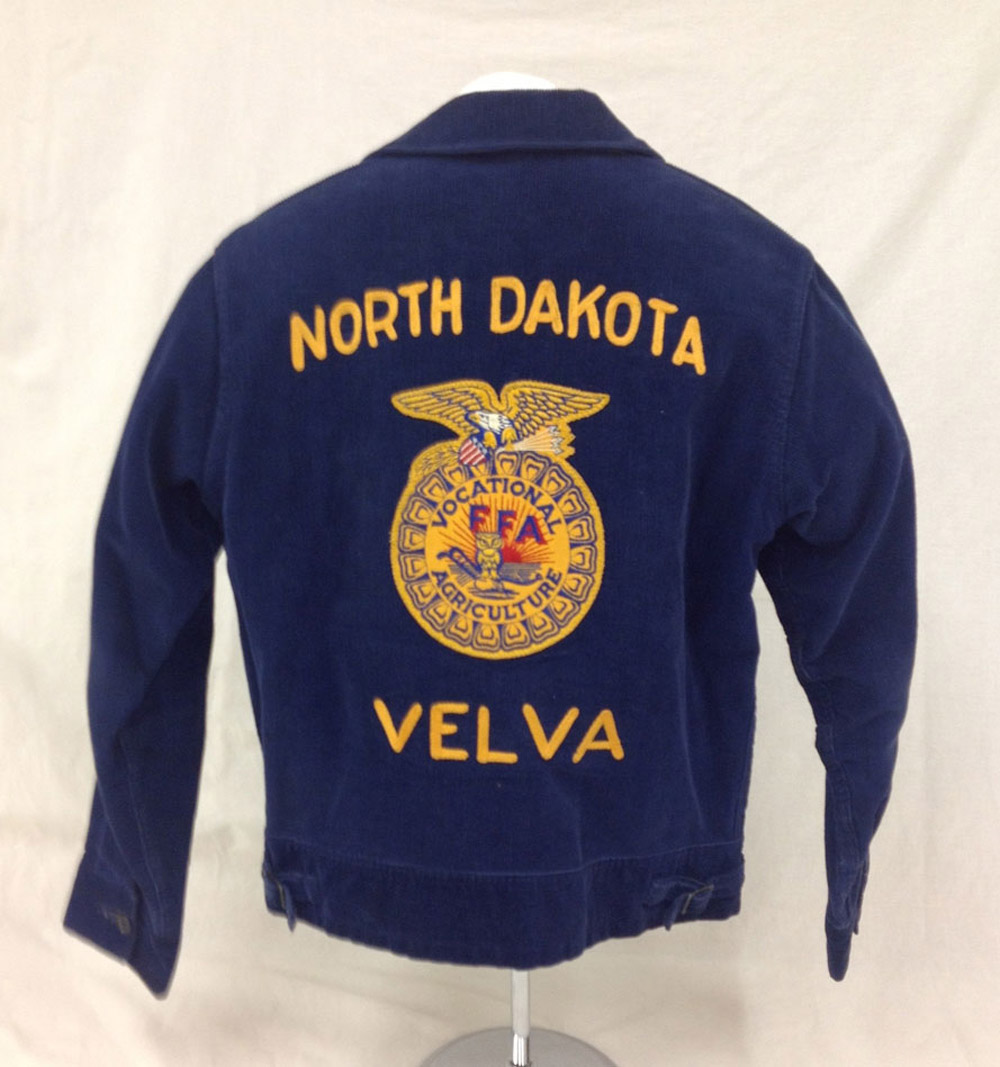 Image 4: FFA members wore distinctive blue corduroy jackets with gold embroidered insignia. The organization’s emblem was embroidered across the back of the jacket. Jackets were required for official events. Courtesy Neil Howe. 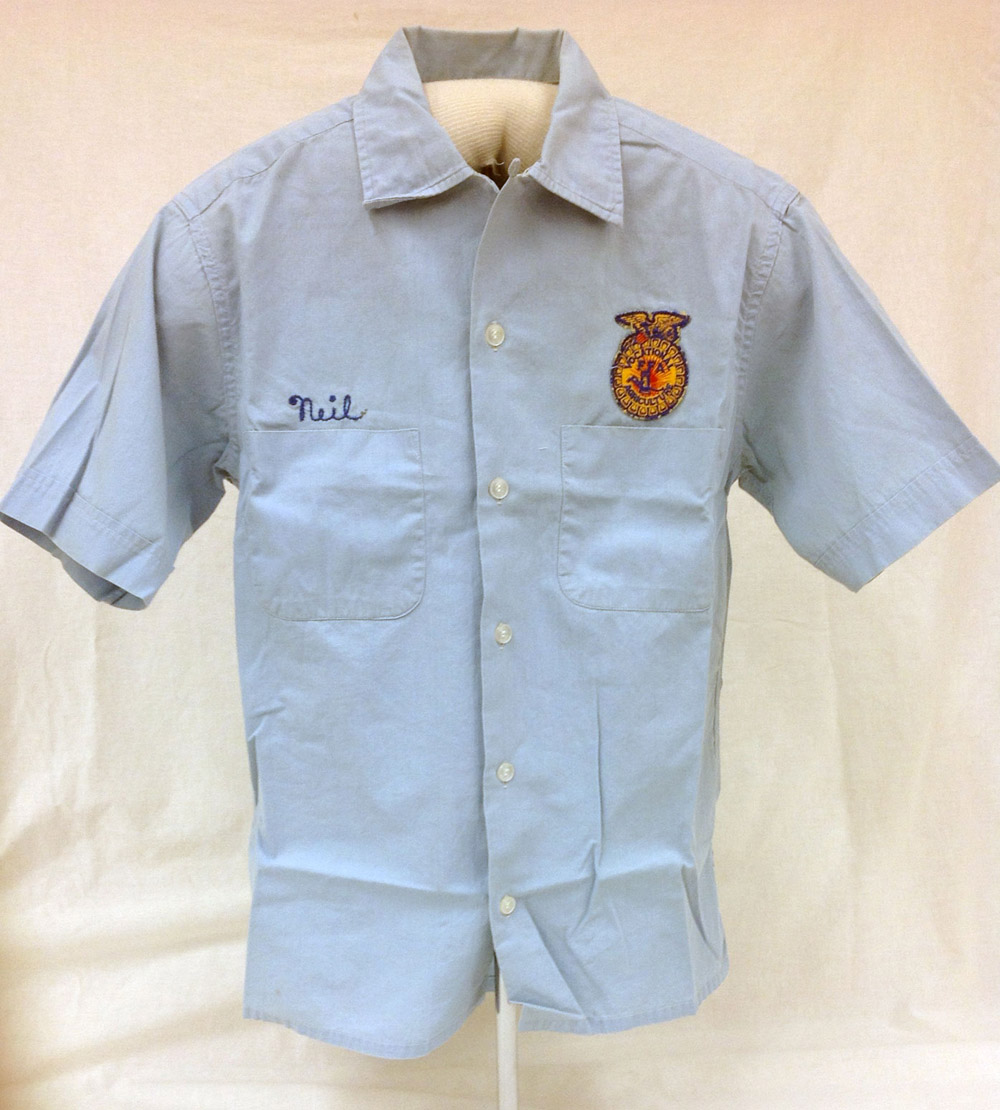 Image 5: FFA members also wore a light blue shirt with the FFA emblem embroidered on it. The shirt was worn on occasions that did not required the corduroy jacket. Courtesy Neil Howe. 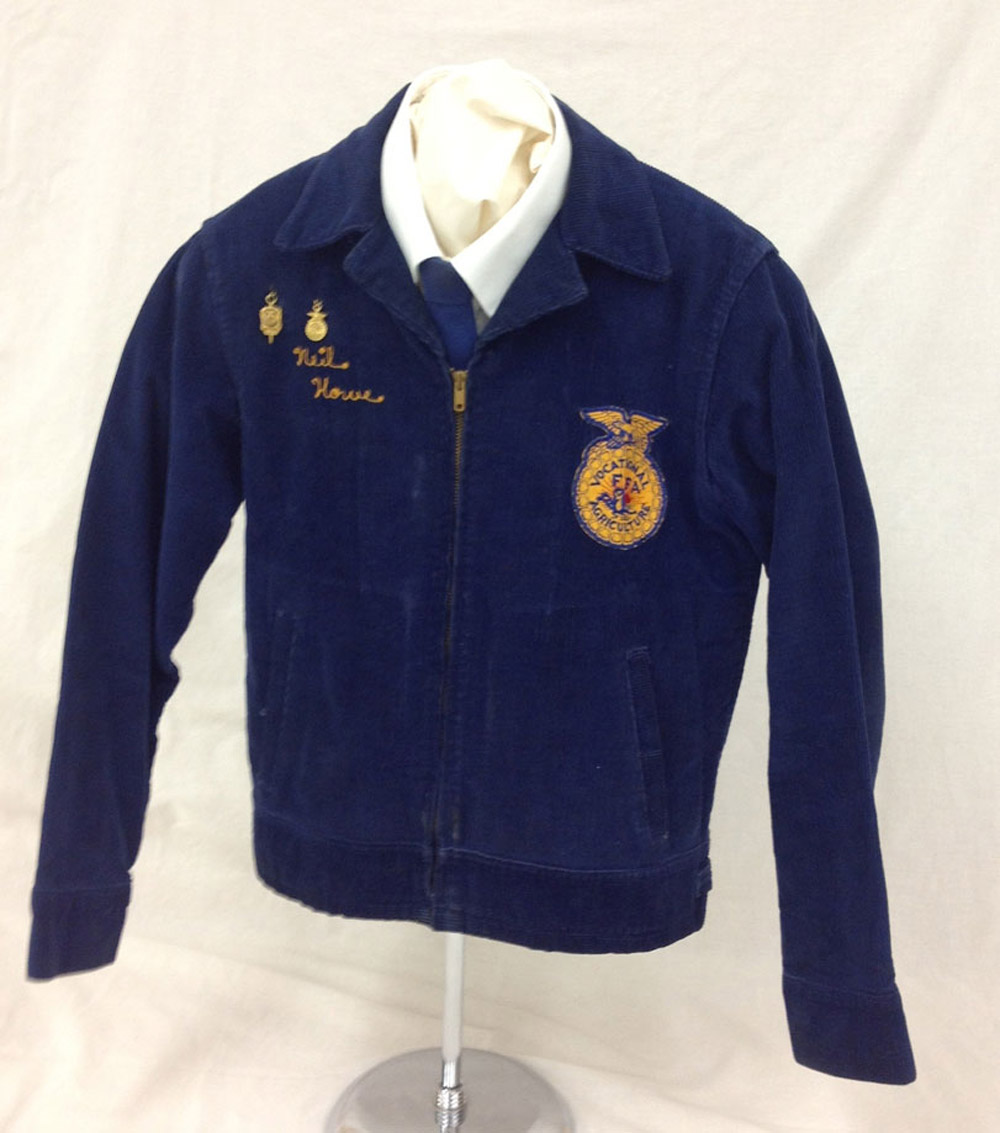 Image 6: The corduroy jacket identified members of FFA at special occasions. Members were to wear a white shirt and a dark tie with the jacket. They wore the pin indicating their highest rank on the jacket. The uniformity of FFA members encouraged them to identify with the organization and with each other. Members learned the importance of personal appearance through their FFA dress code. Courtesy Neil Howe. 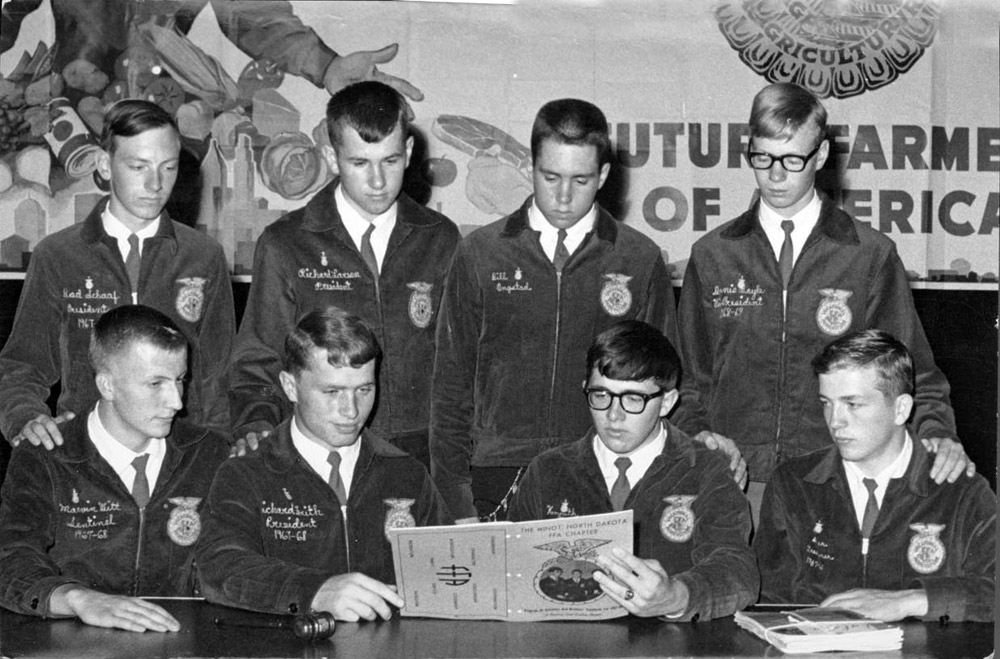 Image 7: The new state officers of FFA gather to read over their new duties in the FFA manual. They are wearing their blue FFA jackets with their names and offices stitched on the right side and the FFA emblem on the left side. State officers were elected at the state convention each year. SHSND 10311 Box 10-Folder 13-0019

In 1933, FFA members adopted a distinctive blue corduroy jacket with the FFA emblem embroidered on the back. (See Image 4.) The jackets and light blue shirts set the members apart from other youth organizations. (See Image 5.) FFA members wore their jackets to all official FFA events along with a white shirt and a tie (for boys). (See Image 6.)

The FFA was a school-based organization. FFA students studied agriculture in their vocational agriculture classes. In their club meetings, they learned organizational procedures and took responsibility for leadership within their chapter meetings as well as at the state and national levels. (See Image 7.) This training has helped many young men and women learn leadership skills they use for the rest of their lives.

By 2006, FFA had adjusted its membership qualifications to include urban students and modern agricultural fields such as communications and agricultural technology. Today, FFA has more than 450,000 members in 50 states and the territories of Puerto Rico, Guam, and the Virgin Islands. (See Document 10.)

I believe in the future of agriculture, with a faith born not of words but of deeds - achievements won by the present and past generations of agriculturists; in the promise of better days through better ways, even as the better things we now enjoy have come to us from the struggles of former years.

I believe that to live and work on a good farm, or to be engaged in other agricultural pursuits, is pleasant as well as challenging; for I know the joys and discomforts of agricultural life and hold an inborn fondness for those associations which, even in hours of discouragement, I cannot deny.

I believe in leadership from ourselves and respect from others. I believe in my own ability to work efficiently and think clearly, with such knowledge and skill as I can secure, and in the ability of progressive agriculturists to serve our own and the public interest in producing and marketing the product of our toil.

I believe in less dependence on begging and more power in bargaining; in the life abundant and enough honest wealth to help make it so--for others as well as myself; in less need for charity and more of it when needed; in being happy myself and playing square with those whose happiness depends upon me.

I believe that American agriculture can and will hold true to the best traditions of our national life and that I can exert an influence in my home and community which will stand solid for my part in that inspiring task.

Document 10: FFA Standards. Like other youth organizations, the FFA had a motto, official colors, and a creed. Members were expected to memorize the creed and other materials to recite at every meeting. The colors, creed, and motto created group loyalty and identity as well as providing an expression of the organization’s ideals.

Why is this important? The FFA, like 4-H, appealed to young people in rural America. When the FFA began, agriculture in North Dakota was suffering from low prices. Many young people left their parents’ farms to find work in cities. FFA helped keep young men on the farm while helping them learn the newest techniques and advances in agriculture. While improving the practice of agriculture, the organization also helped young farm boys learn how to organize and how to lead. Today, young women and men participate in FFA while learning more about farming.