In the floating community of the North Dakota, the weekly routine was occasionally interrupted for pleasure and social events such as musical presentations by the ship’s band, worship services (only Christian services were held), and silent movies or cartoons. Entertainment was very similar to what would be available if the sailors were on shore. Very likely, except for worship services, none of these social events would have taken place on ships before 1913. (See Document 3) In the old Navy, sailors entertained themselves by carving wood or ivory, knitting, sewing, and singing or playing musical instruments. The new Navy, which the North Dakota proudly represented, provided sailors with more activities to pass the time. 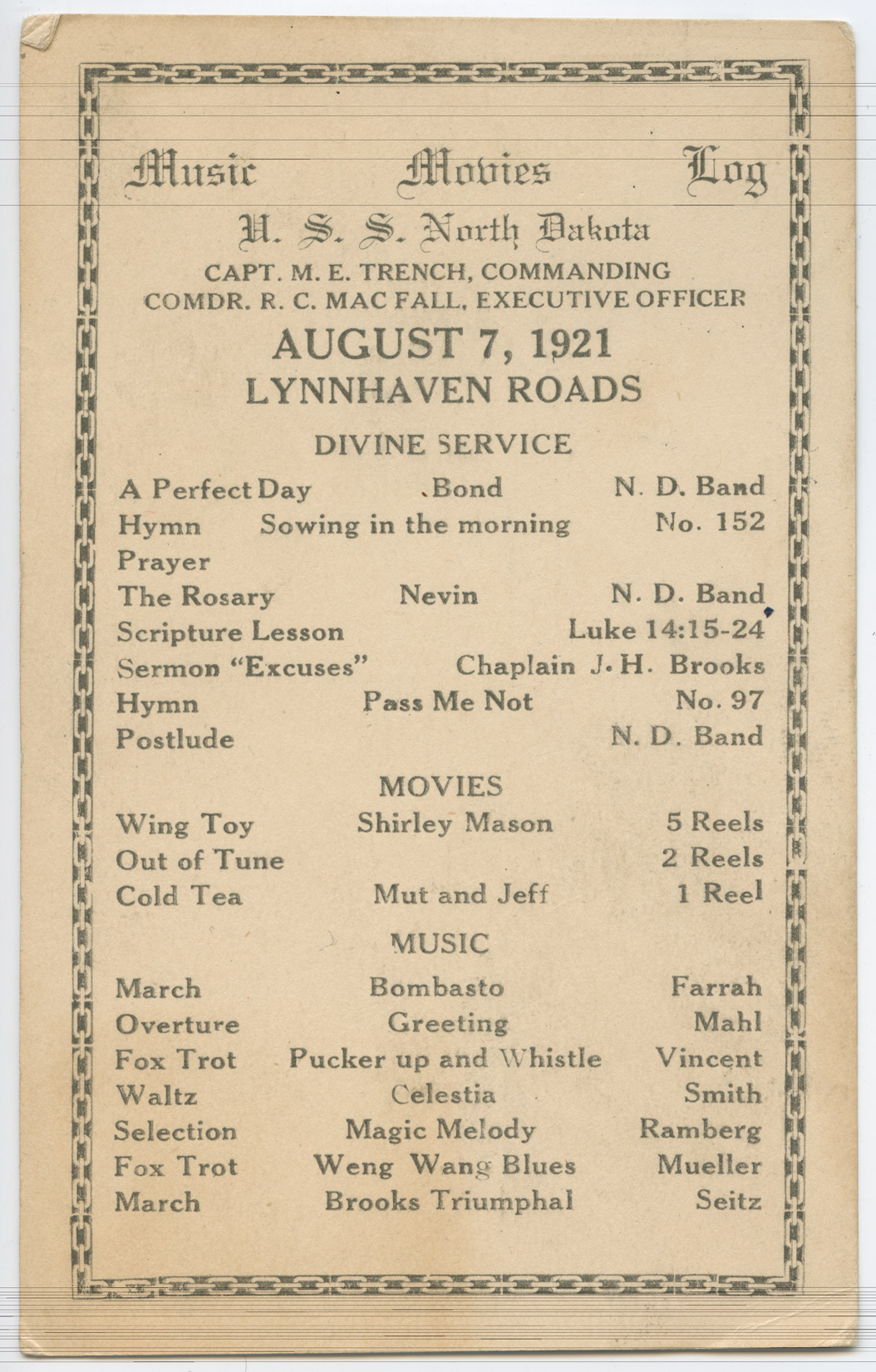 Document 3: This card was published to let members of the ship’s crew know about worship services, movies (including the popular cartoon “Mutt and Jeff”), and music on a Sunday. In port, the men may have had free time to enjoy these activities. SHSND 2002-P-15-Album2-P56b. 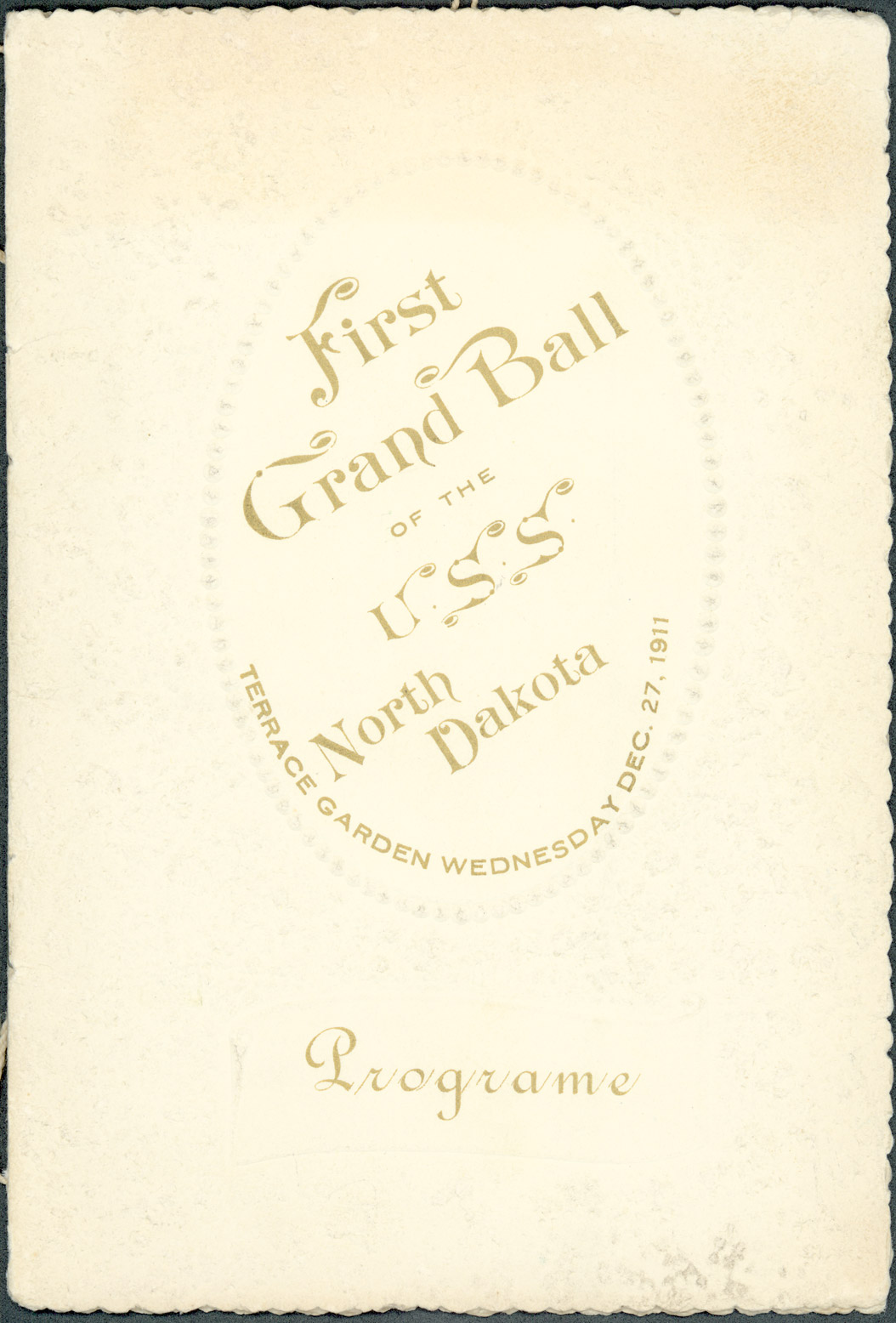 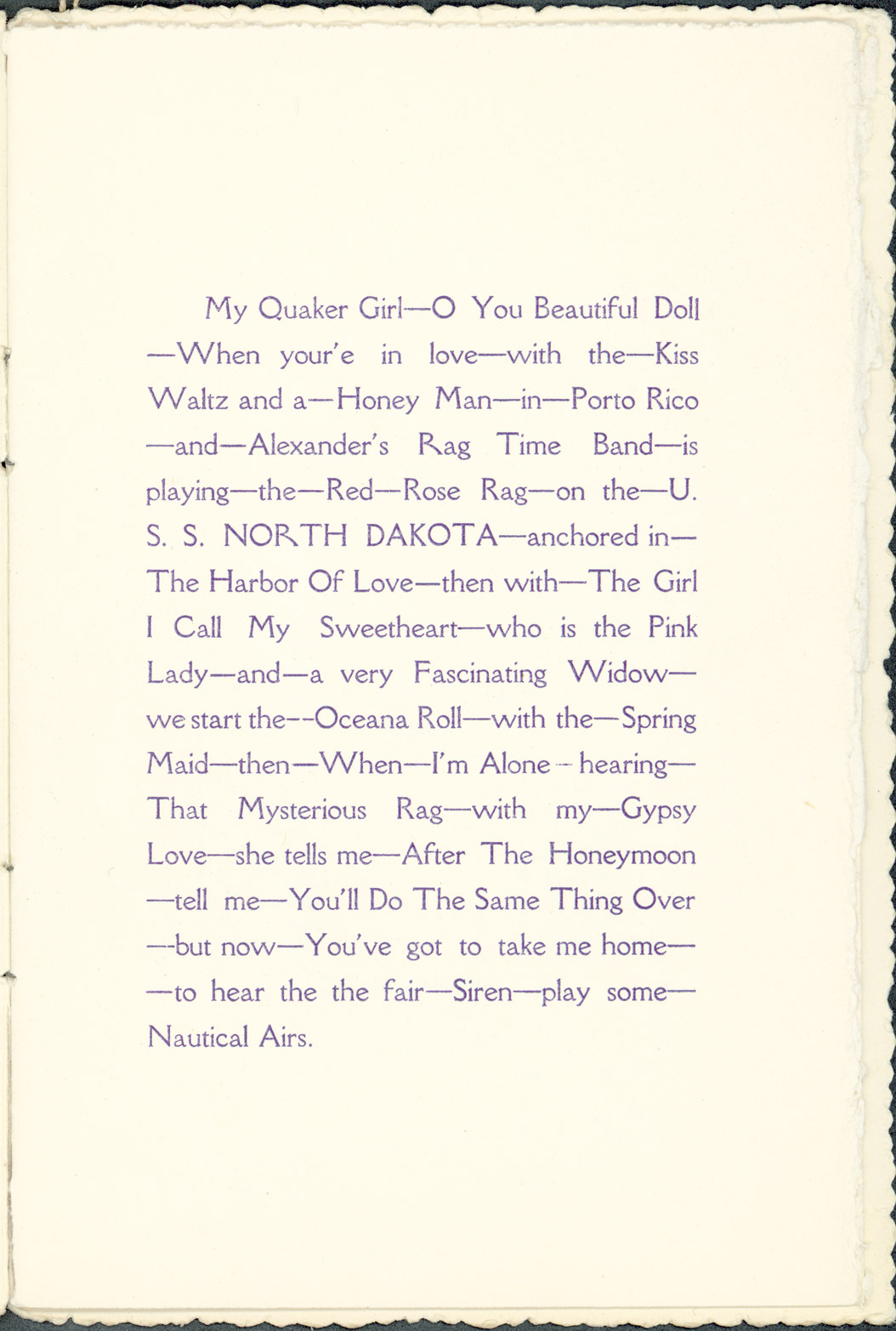 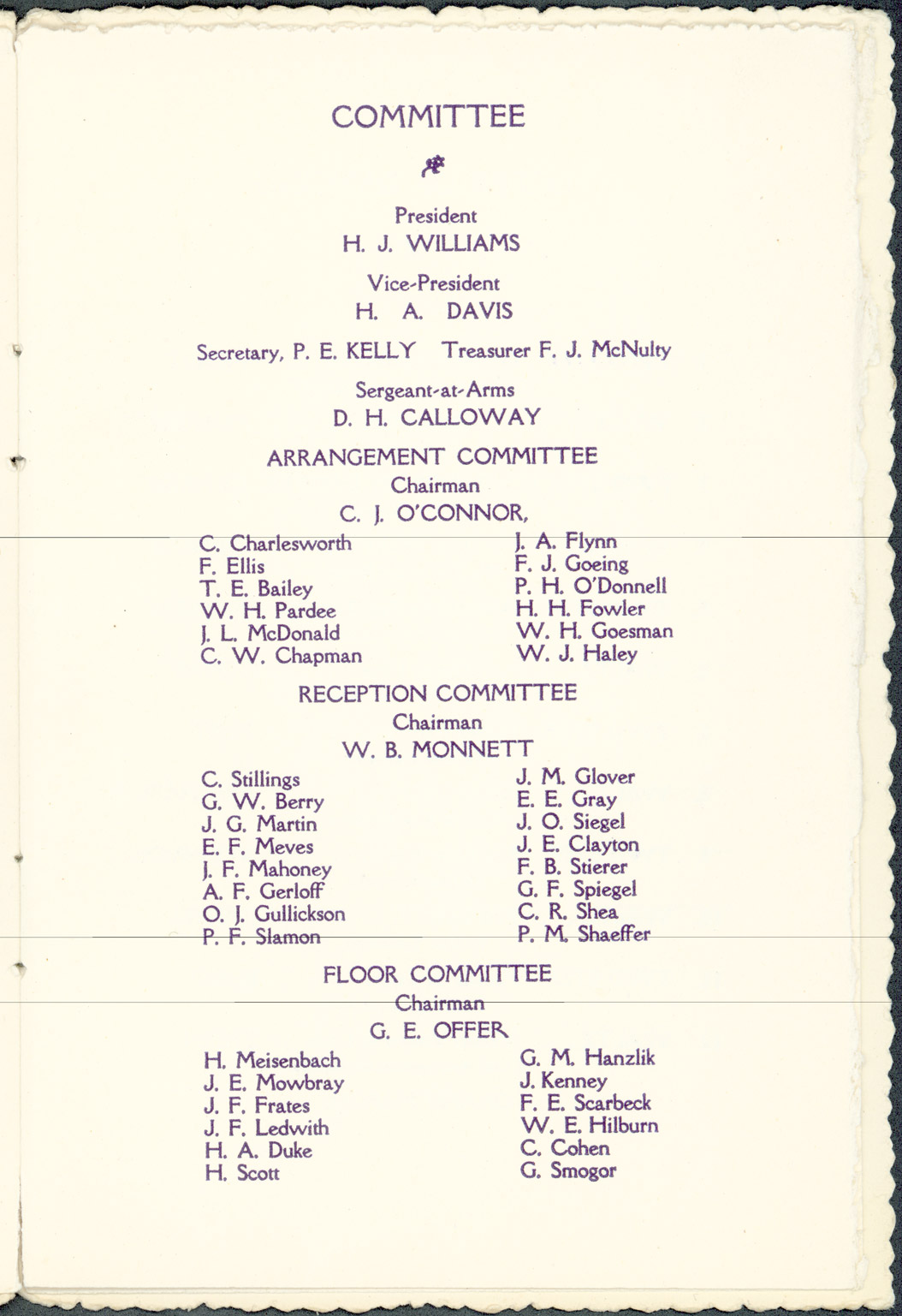 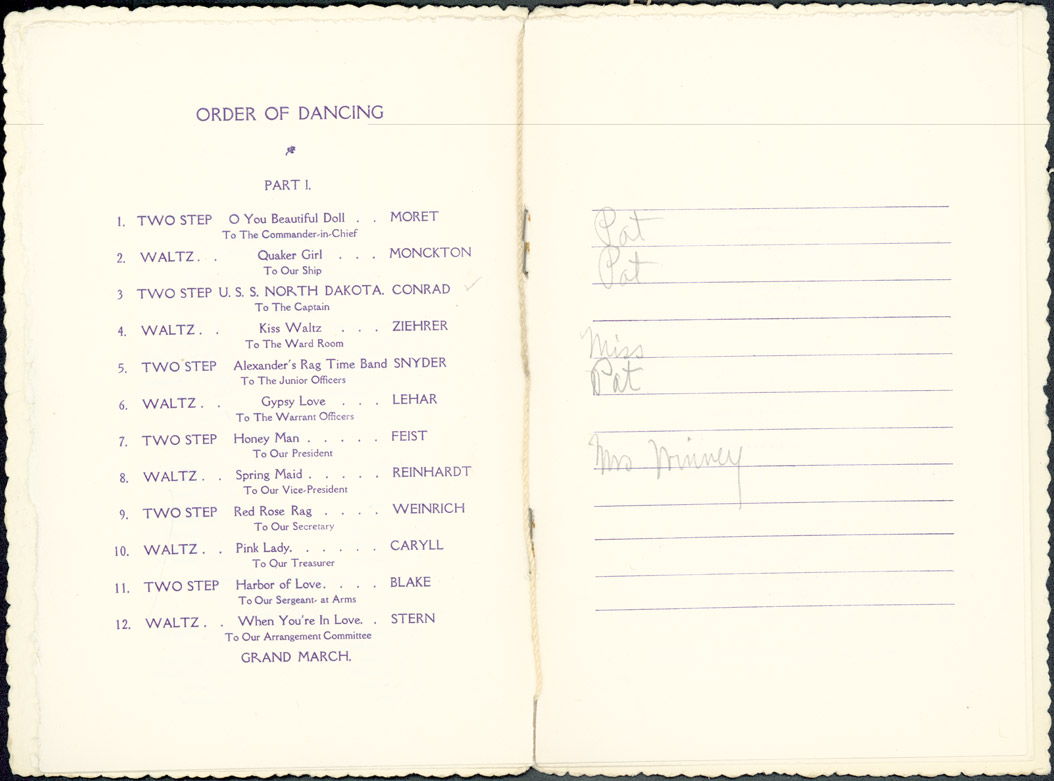 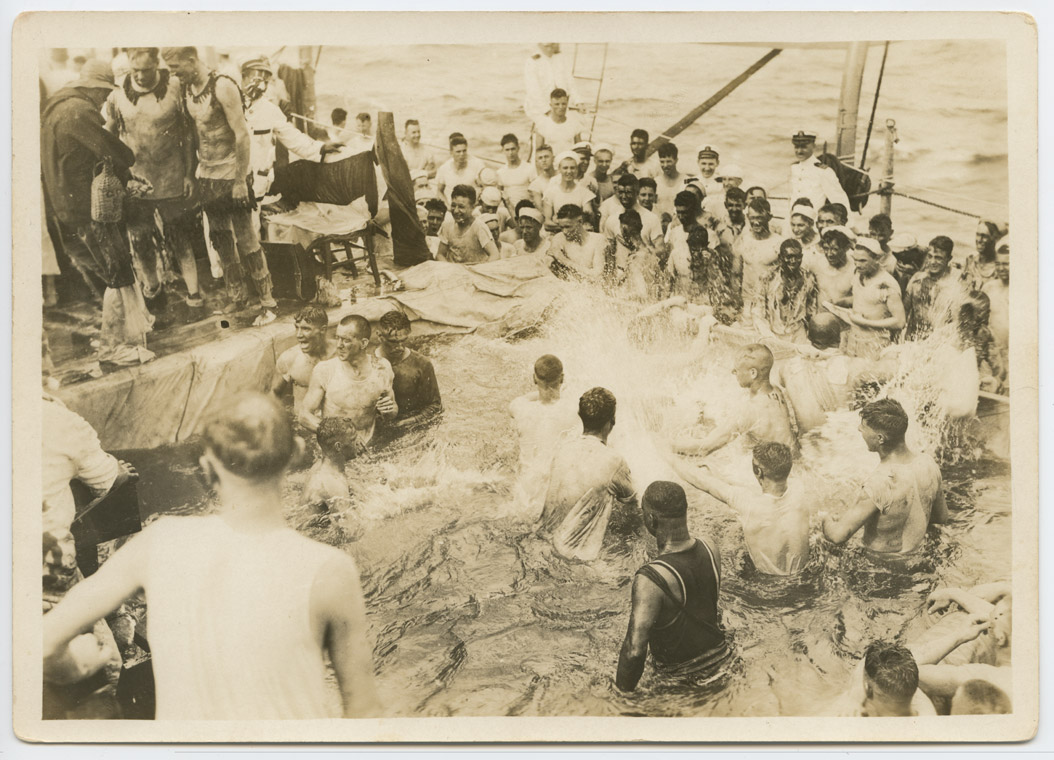 Image 7: The pollywogs were dunked during the Crossing the Line celebration. Note the African American man in the pool with his back to the camera, and another African American man waiting for his turn along the side of the pool to the right. Officers can be seen observing the fun. SHSND 2002-P-15-Album2-P20b. 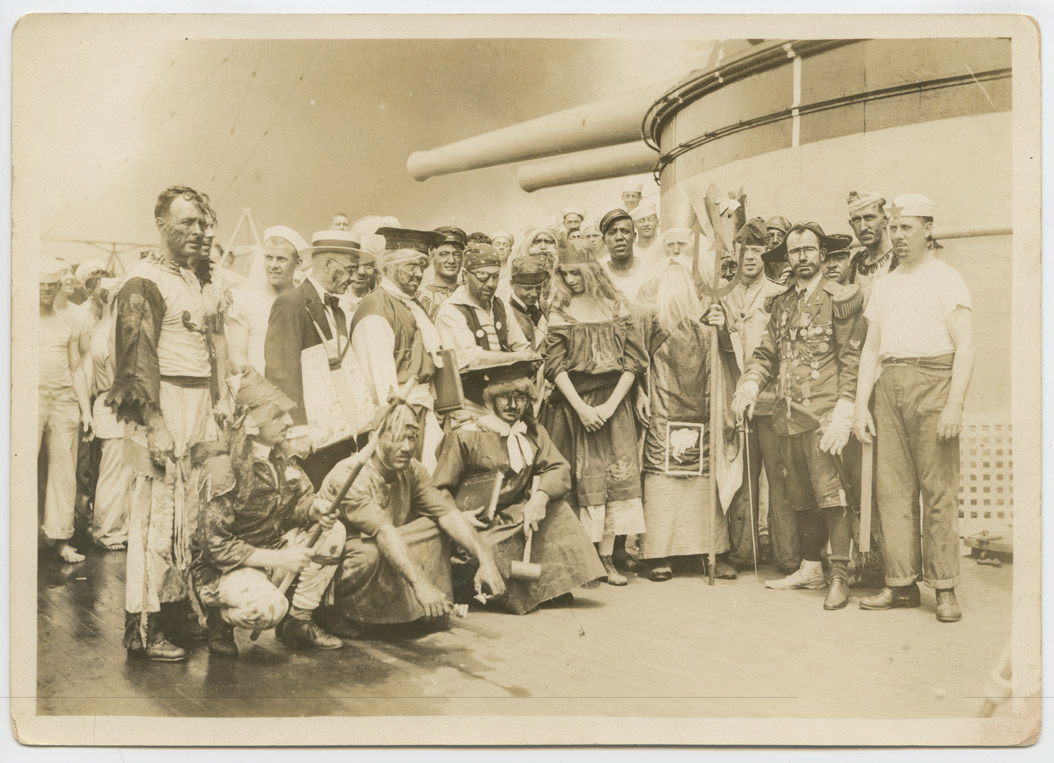 The new Navy, however, maintained the important segregation between officers and enlisted men. For instance, if officers engaged in sports, they would have had other officers as teammates and opponents. Of the records remaining from the USS North Dakota, we have one document of a social event open only to officers—the USS North Dakota Ball. The ball was held on land while the ship was in port in order for the officers to invite ladies as their guests.

A program from this ball lists the songs played for the dance including the “Oceana Roll,” “After the Honeymoon,” and “USS North Dakota” – a two-step. (See Document 4) At the back of the program is the dance card of the officer who kept this program as a memento of that occasion. Here he wrote in the names of the women who had agreed to dance with him during the evening.

The traditions of the officers’ ball were ancient and very strict, but the ball was one place that young officers could learn and practice the social skills that would help them move up in rank and possibly meet a young woman who would like to be married to a Navy officer.

Officers would not have mingled with enlisted men at most social events because the Navy believed that discipline was best maintained by the separation of officers and enlisted men. However, one particular and exceptional event brought all the men of the ship together in a bonding ritual that was hundreds of years old. When the ship crossed the equator, the men celebrated the passage known as “Crossing the Line.”  Pollywogs (those who had not previously crossed the equator) would be initiated by a series of activities that took a day or more to conclude. (See Image 7) Even senior officers would be included in the rowdy celebration. The final event involved creating a pool of water on the deck where pollywogs would be dunked. Among the characters that governed the celebration were shellbacks (those who had previously crossed the line) dressed as King Neptune, Davy Jones, and others. (See Image 8)

The Crossing the Line party on the North Dakota was celebrated by everyone aboard the ship. Officers appeared in costume and some are visible in the photographs observing the dunking. Most interesting in the photographs are the African American sailors among the pollywogs. All of the United States’ Armed Forces were racially segregated until 1948, but on a floating community such as the battleship North Dakota, segregation was imperfect. Though African American sailors were probably assigned to the most demeaning work and had few opportunities for advancement, they were present for the Crossing the Line celebration and received their cards identifying them as shellbacks along with the rest.

Why is this important? The community of the North Dakota was like any other community in many ways. The men established social relationships with their friends and co-workers. Most men socialized with other men of their rank. Sometimes, such as at worship services, everyone could be present regardless of rank or the bonds of friendship. The Navy encouraged various kinds of social activities as a way of making the sailors more content during long tours of duty at sea.