The men of the USS North Dakota had regular duties when the ship was at sea and in port. The ship at sea had to provide for all the needs of a community that had a population larger than that of many North Dakota towns. The work can be divided into two classifications: the jobs of enlisted men and the jobs of officers. 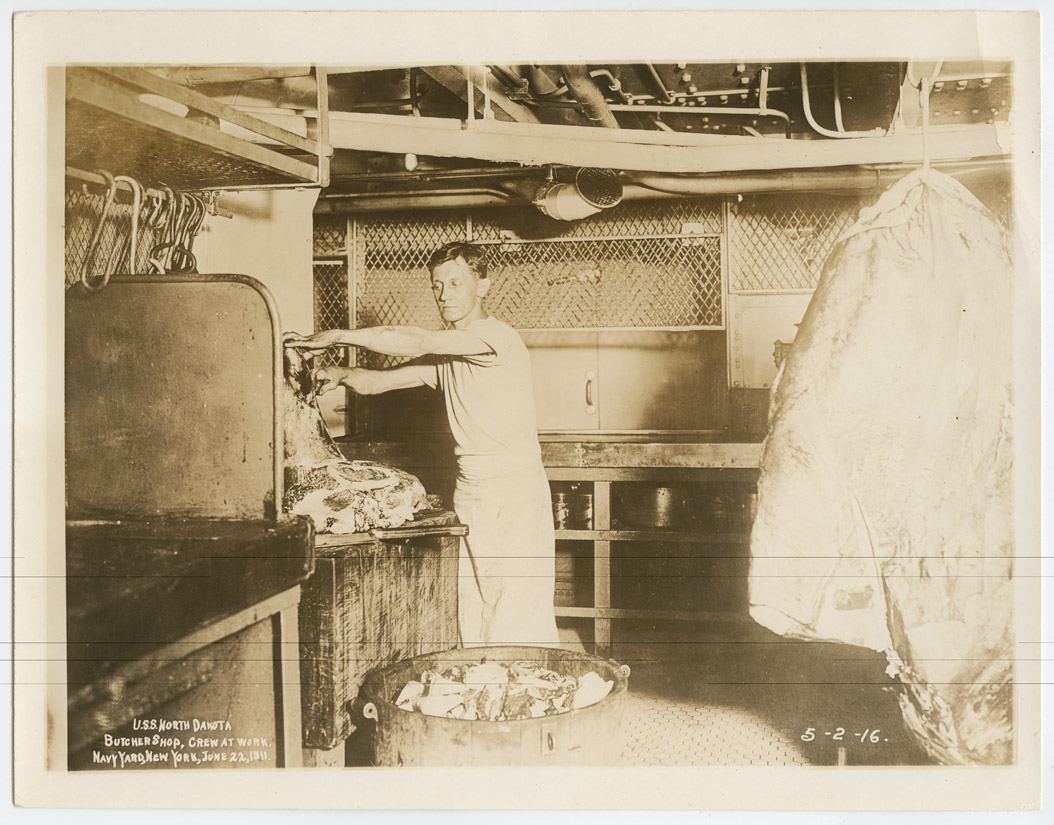 The work of operating and maintaining the two Curtis turbine engines was assigned to enlisted men. The engines usually ran on coal, though they could run on fuel oil. The “coal passers” shoveled coal from the storage bins into the engines. This was a dirty and hard job that proved to be dangerous as well. These engineers worked in a room with no daylight, poor air quality, and high temperatures.

Preparing meals was the job of enlisted men. (See Image 3) Cooks and their helpers worked in high temperatures managing huge kettles and sides of beef and pork. Filipino sailors, who were distinguished by their status as citizens of a nation under the control of the U.S., their dark skin color, and their lack of fluency in speaking English, often worked as mess assistants. Their jobs were to serve and clean up after meals.

Stewards were enlisted men who attended the officers by cleaning their quarters and providing them with necessary services. When the ship was preparing to fire its big guns, the stewards had to secure all breakable items such as mirrors and lamps in the officers’ quarters to prevent them being knocked over by the recoil when the guns were fired. Even the ship’s piano had to be raised from the floor and supported by ropes because otherwise the strings would break under the stress of the guns’ recoil. 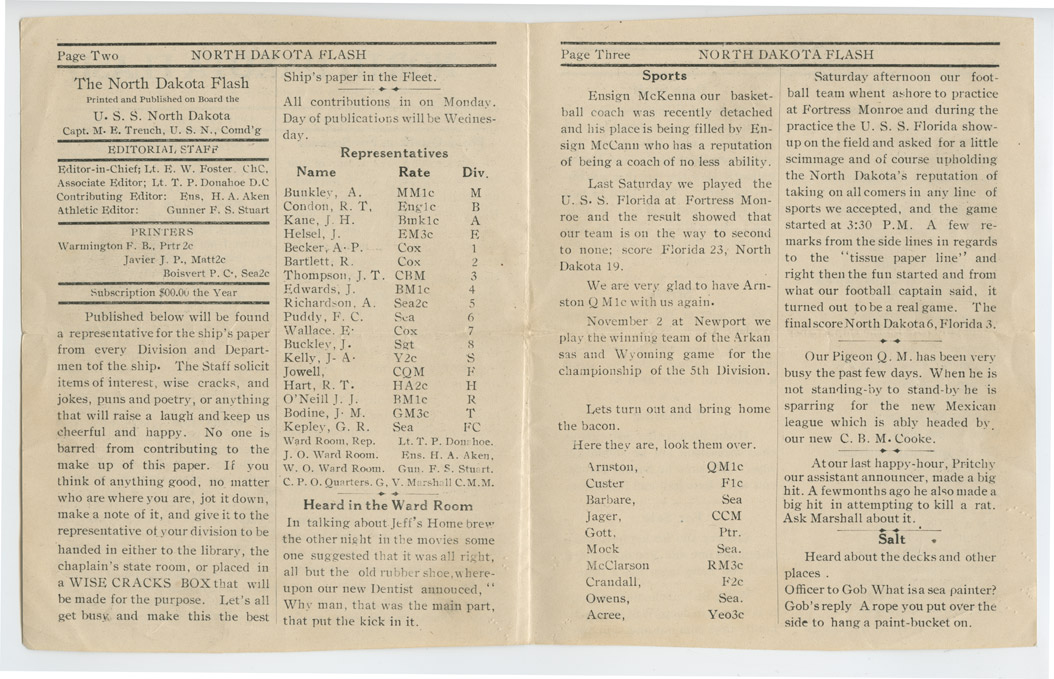 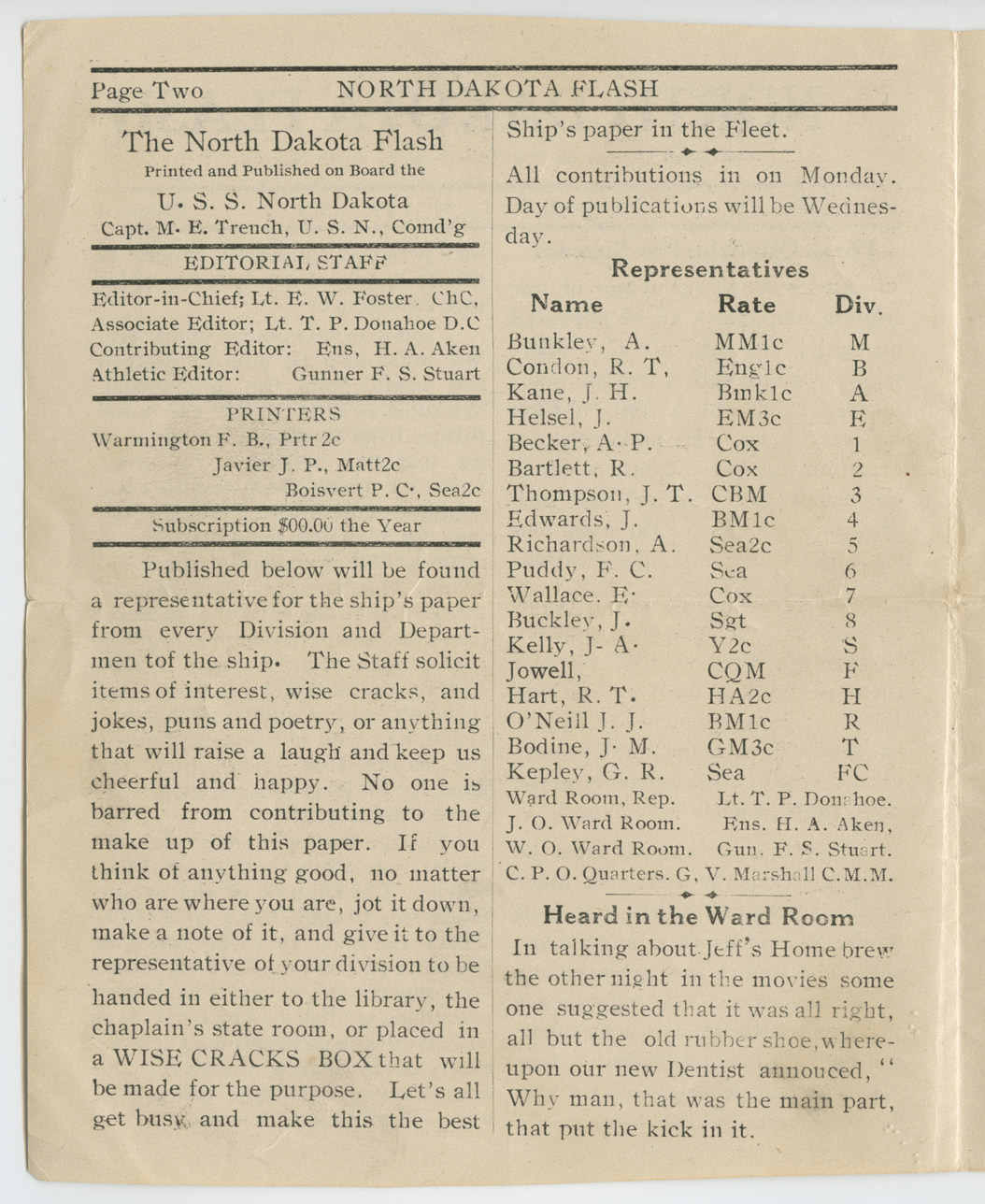 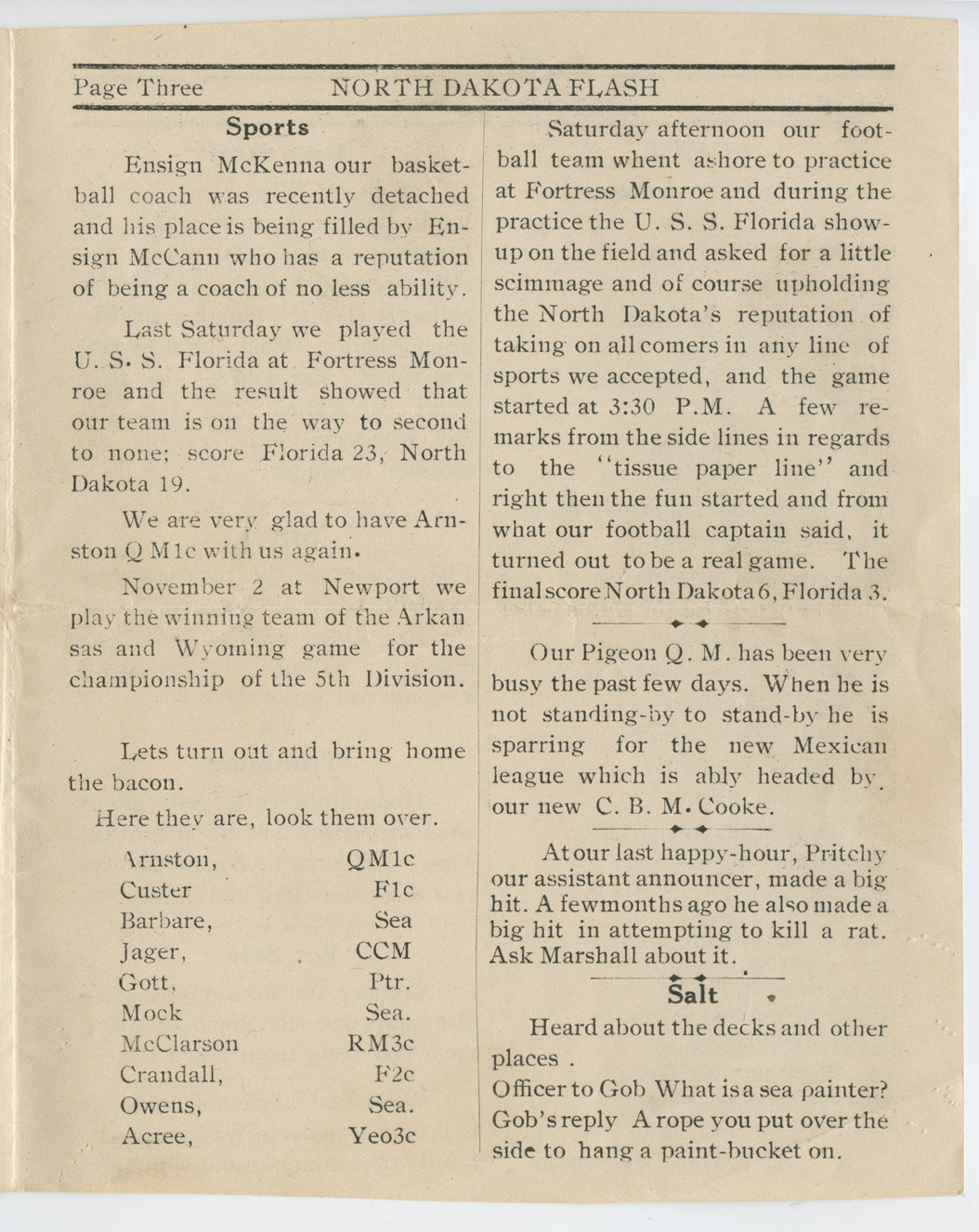 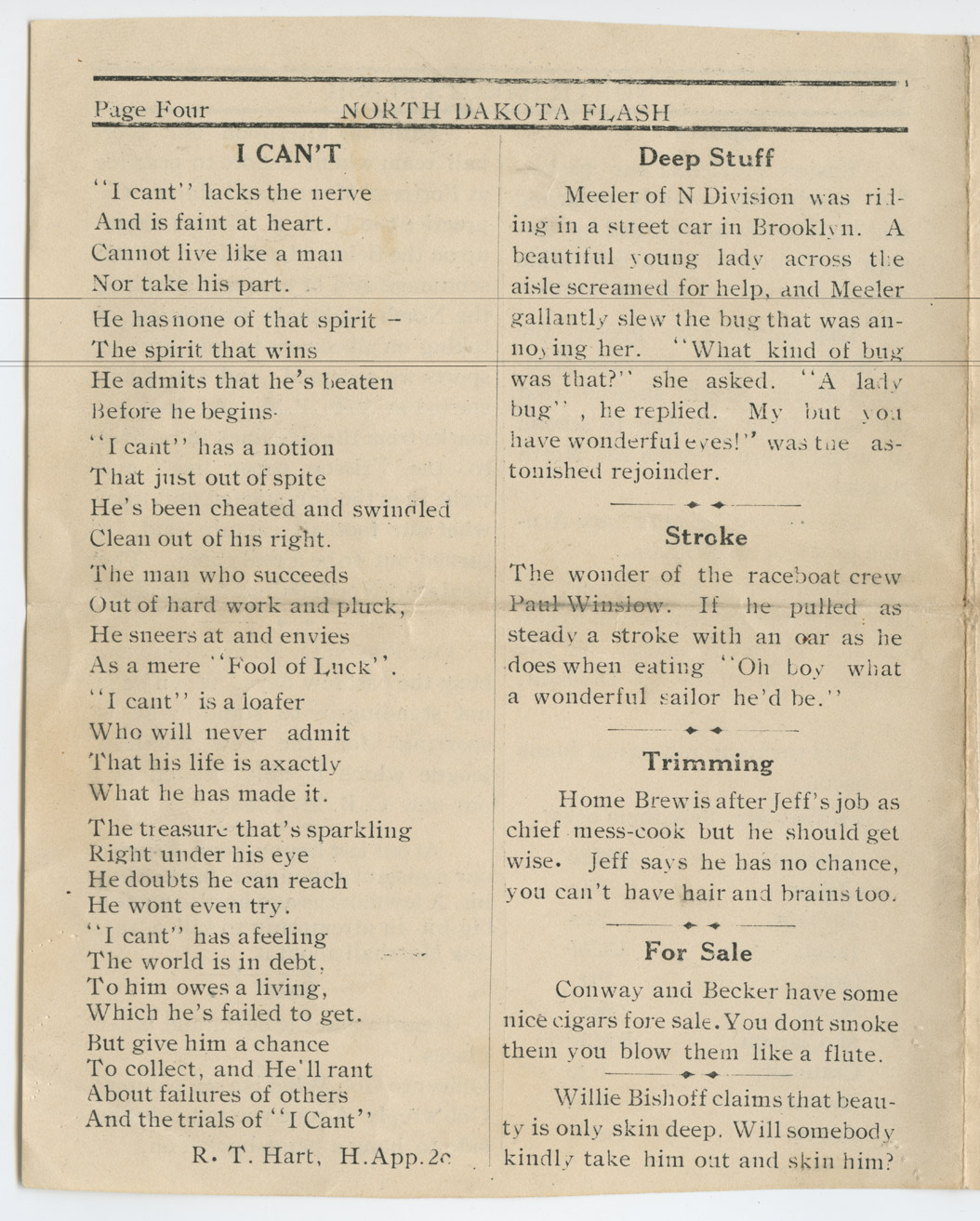 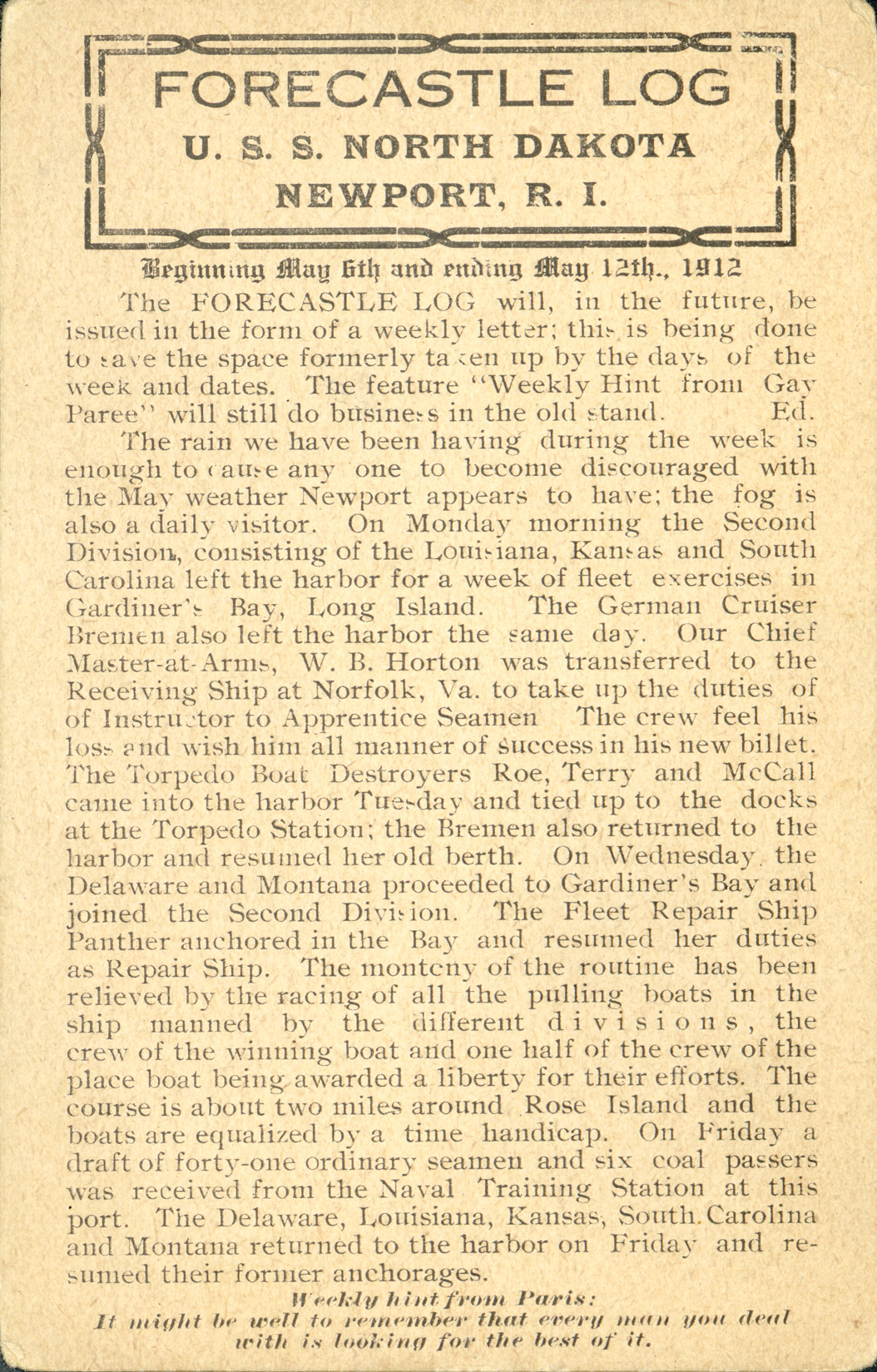 A variety of skilled and semi-skilled jobs were found on the ship, too. Printers published the ship’s newsletter, The Flash or the earlier Forecastle Log, (See Document 1) as well as smaller publications including notices about the week’s entertainment. Blacksmiths forged metal pieces for repairs on the ship. Radio operators maintained the ship’s communications with other ships and with on-shore offices. Officers included the ship’s captain, navigator, and men who served as leaders in every office and operation on the ship. Many of them were trained as engineers and understood every detail of the ship’s mechanical operation. (See Document 2)

In addition, like most land-based communities, the ship also had a doctor and dentist (both officers). The doctor was necessary for small and large health problems. In June 1915, as the North Dakota sailed into the shipyards for repairs, several sailors were being treated for diphtheria causing the ship to be quarantined.

The most glamorous job on the North Dakota was maintaining and firing the big guns. Each gun was assigned to a team consisting of enlisted men of different ranks (or “rates”) and an officer, usually a lieutenant or ensign. The ship was always prepared for combat, but the North Dakota was never to engage in battle. In the meantime, the business of the ship’s men was to maintain the ship and its floating community in good health, good spirits, and good condition.

Why is this important? Taking the historical view of the work details on the USS North Dakota tells us how U.S. society organized around race. Race is the term many people use to categorize people according to their biological qualities such as skin color, hair quality, and physical height. In the early 20th century, many people believed that racial qualities affected a person’s character and intelligence. Though African Americans and Asians such as the Filipinos could join the Navy and serve on warships, they were segregated in their work and living quarters. Men of color were assigned to the lowest jobs on the ships. They were servants or assistants, but they did not fire the big guns or steer the ship. The military services were not fully integrated until 1948.