George Will was born in 1884. His father,  Oscar H. Will, started the seed company in Bismarck. George graduated from Bismarck High School in 1902 and then attended Harvard. At Harvard, George Will studied anthropology, archeology, and horticulture. He returned to Bismarck to work in his father’s seed business. 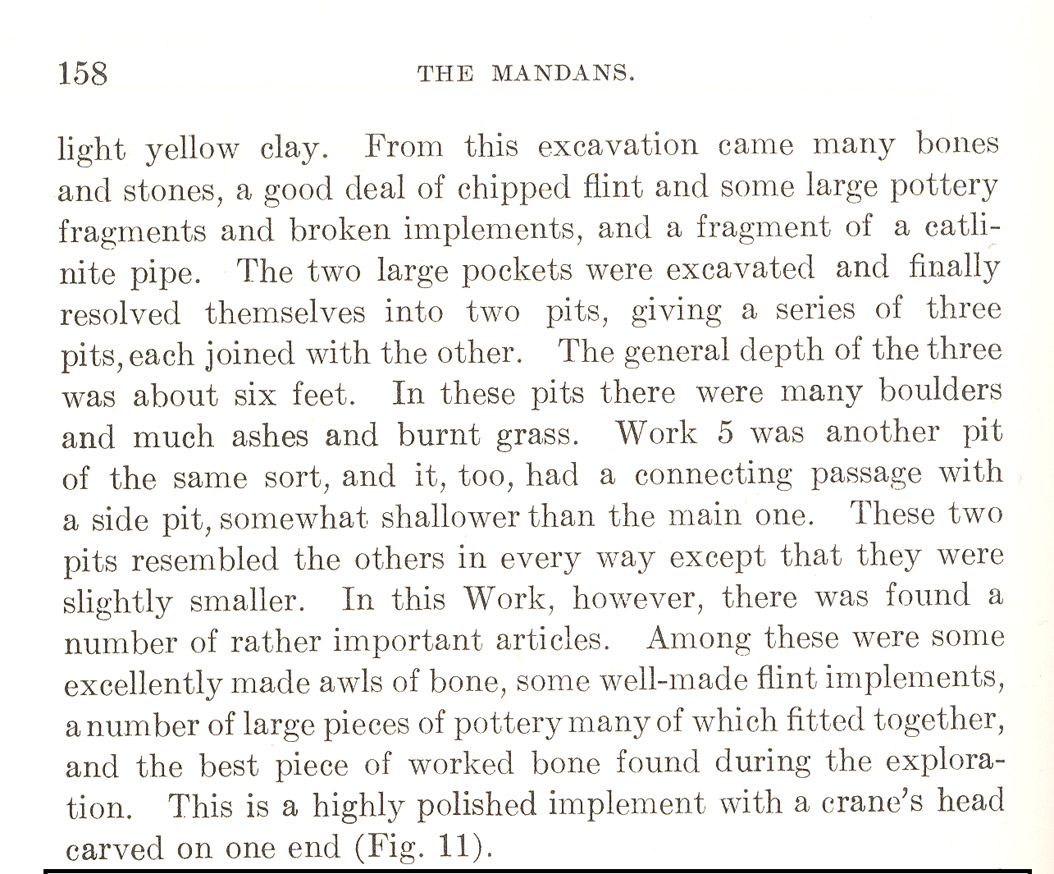 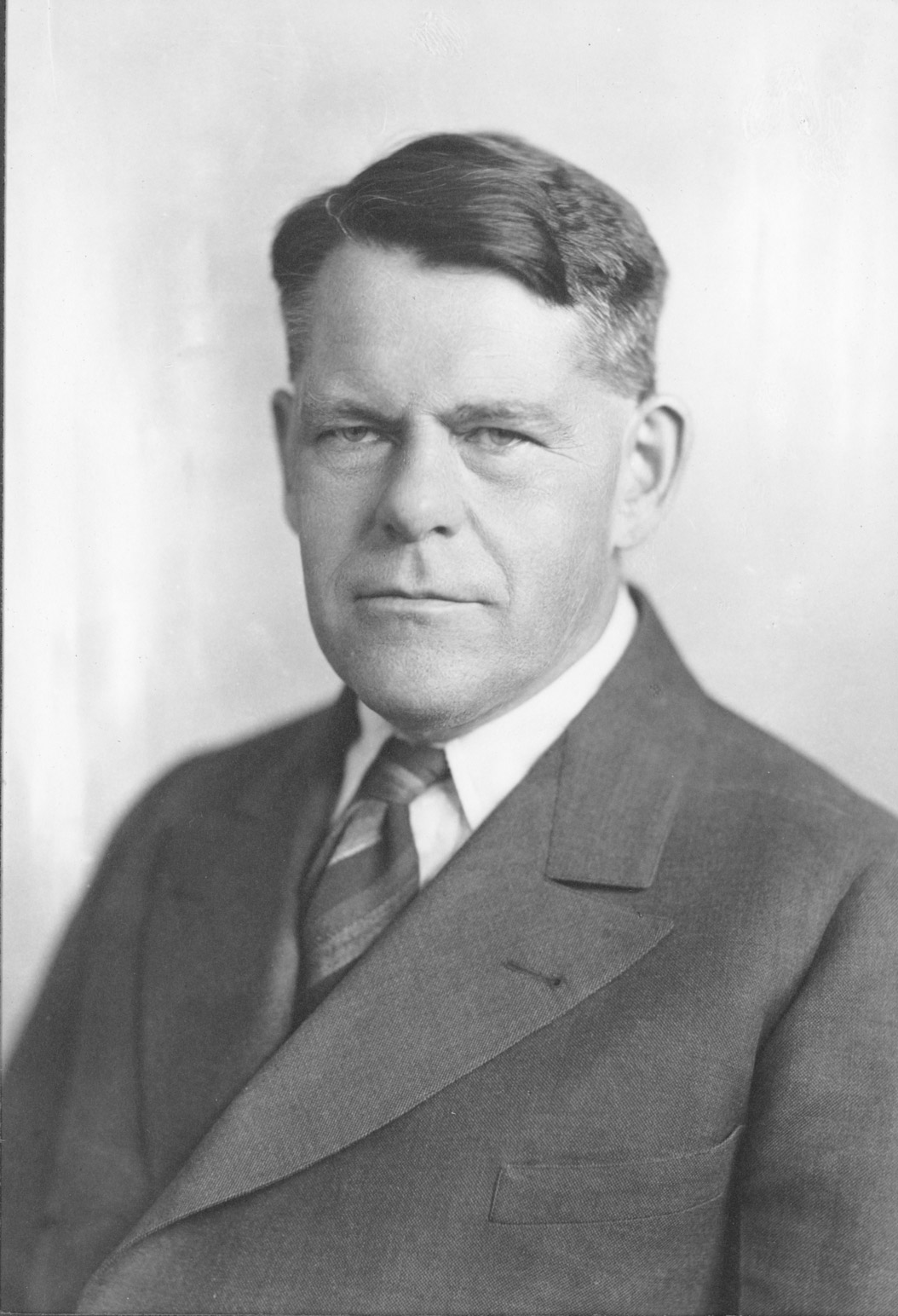 Image 29: George Will. As a college student, George Will examined the ancient village site called Double Ditch on the Missouri River north of Bismarck. SHSND 1085-06. 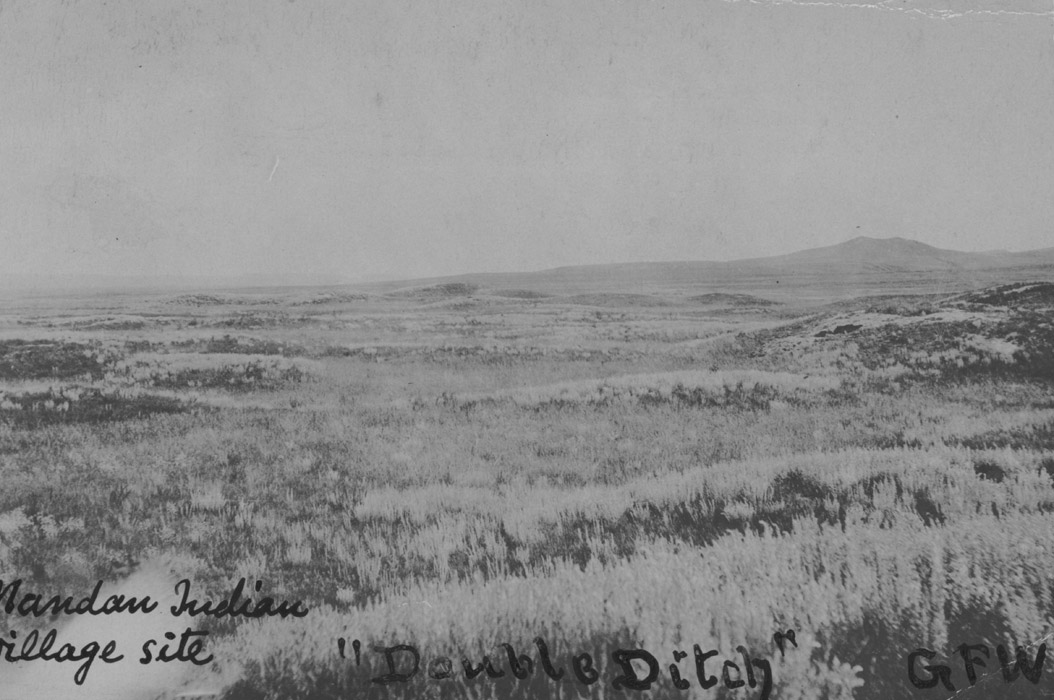 Image 30: Before George Will and his team began their survey of Double Ditch, the landscape revealed that earthworks had been built there in the distant past. SHSND 0105-0108. 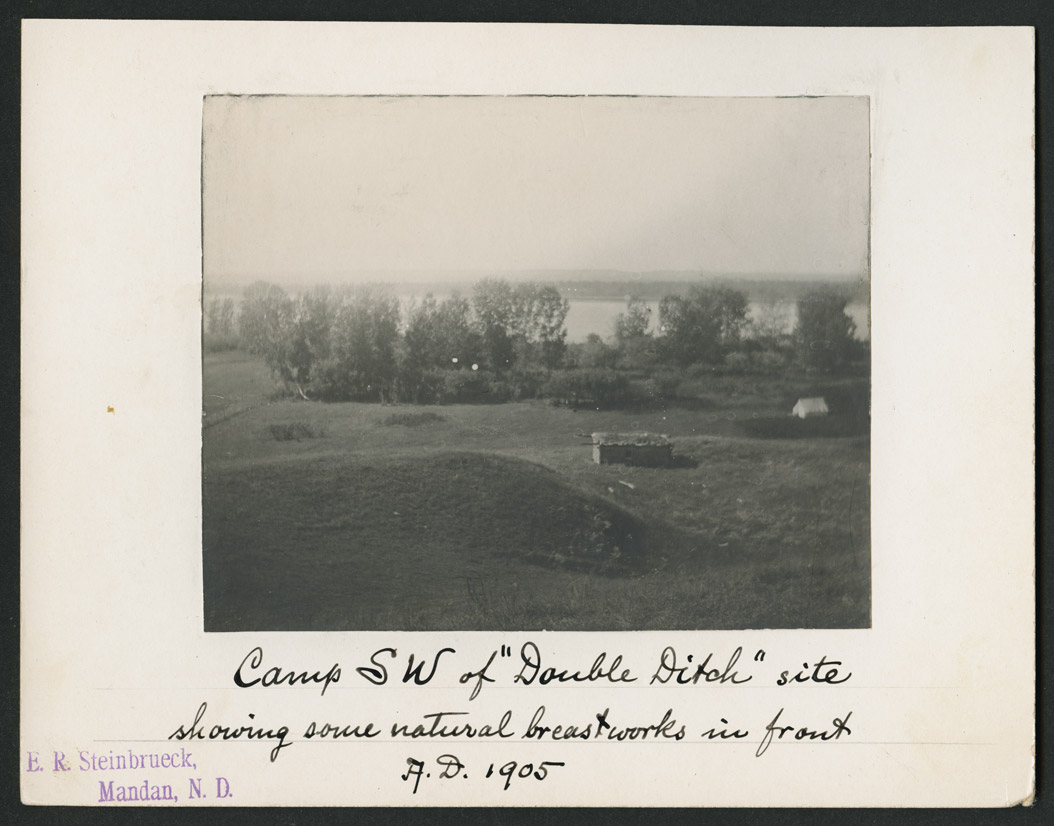 Image 31: This photograph shows the tent where George Will and his team lived while conducting their research at Double Ditch. The building probably belonged to Mr. Burgois who was the owner of the land at that time. The photograph plainly shows the earthworks that were constructed by the Mandans to protect their village. SHSND A1257.

In 1905, as an undergraduate at Harvard, George Will (See Image 29) surveyed the ancient earthlodge village called Double Ditch. (See Image 30)  The excavations that Will and three of his classmates made at that site were the first careful studies of Double Ditch villages. (See Image 31) They found evidence that the people who had lived there raised corn, beans, and other vegetables. They also hunted and ate bison. 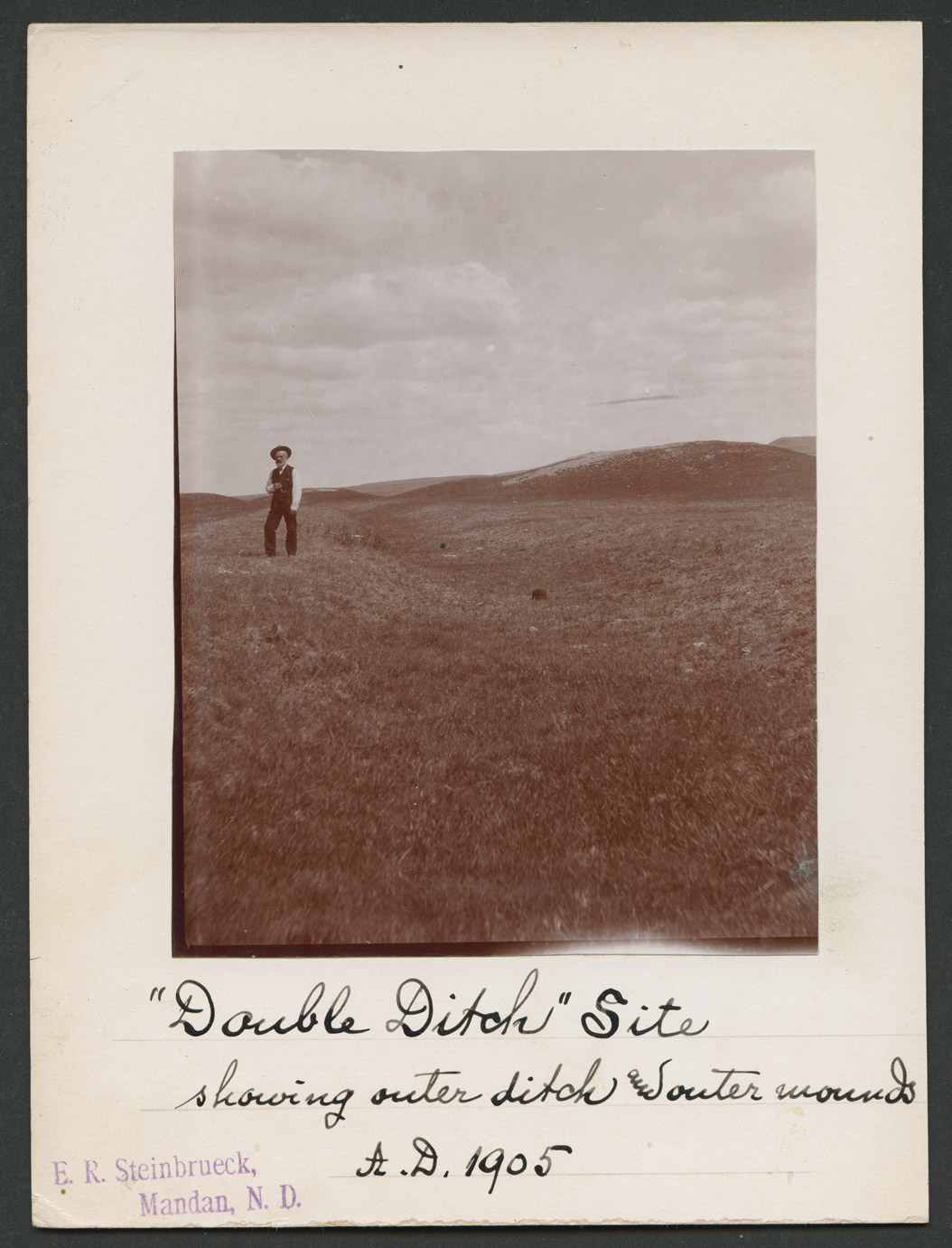 Image 32: This photograph was taken at the Double Ditch site in 1905. It clearly shows a ditch and a mound. These structures protected the villages from unfriendly visitors. SHSND A1236.

On the surface, the students found remains of two ditchesToday we know that there were actually four fortified villages on this site. Sophisticated equipment that measures magnetic resonance has helped archeologists locate the two earliest ditches protecting even larger villages. These older ditches are not visible on the surface. with mounded walls, circular houses, and cache pits. (See Image 32) Each ditch indicated the presence of a village. The site had been occupied by successive villages, each one smaller than the one before. The students learned that the mounds allowed the village guards to watch for anyone approaching the village from the east, north, or south. (See Image 33) The west side was protected by the high banks of the Missouri River. Will and his friends identified the bastions, or extensions of the earthen walls as part of the protective system of the village. 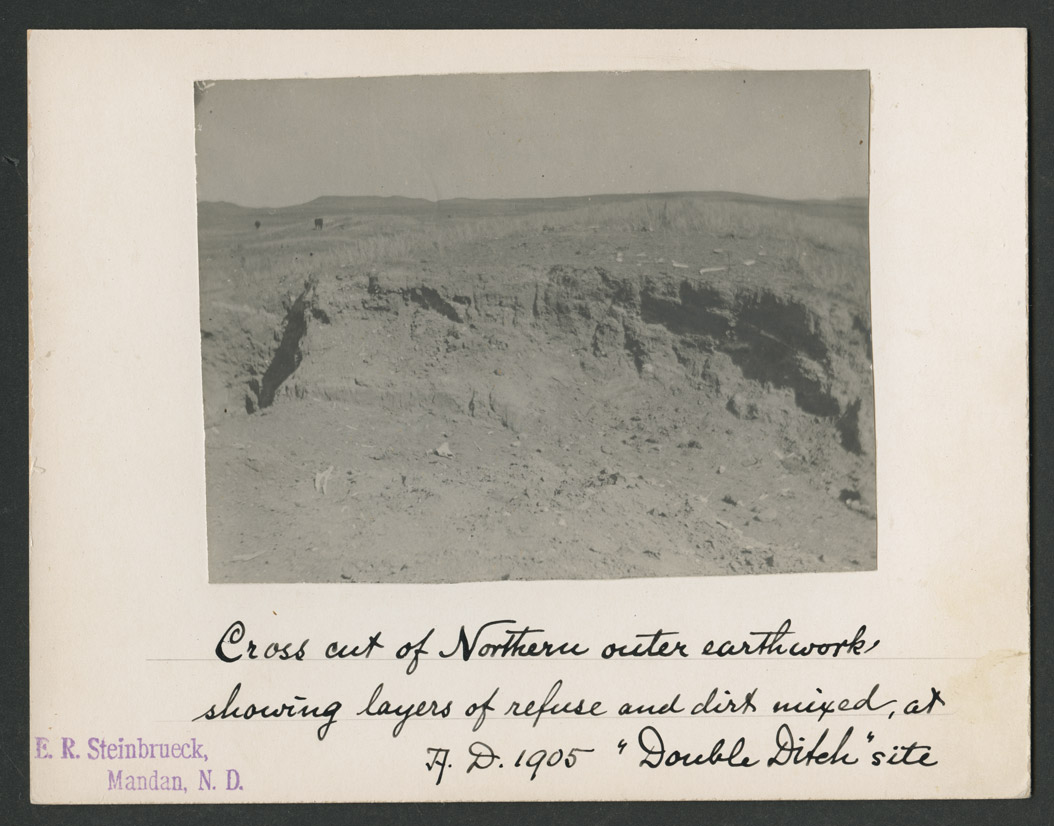 Image 33: This photograph of the 1905 archeological survey at Double Ditch shows how the college students cut across some of the mounds. They found bits of bone, pottery, tools, and other objects in these mounds. SHSND A1237.

Among the bits of archeological evidence that Will found beneath the surface were tools, spear and arrow points, bits of pottery, and pieces that may have been used for decorating pots. (See Document 7) They found a small piece of copper which suggests that the residents of these villages engaged in trade with people from places where copper was available. It is also possible that the copper piece was dropped by someone who visited the village while it was still occupied. They also found bits of charred corn indicating that the people who lived here raised and ate corn. (See Image 34) 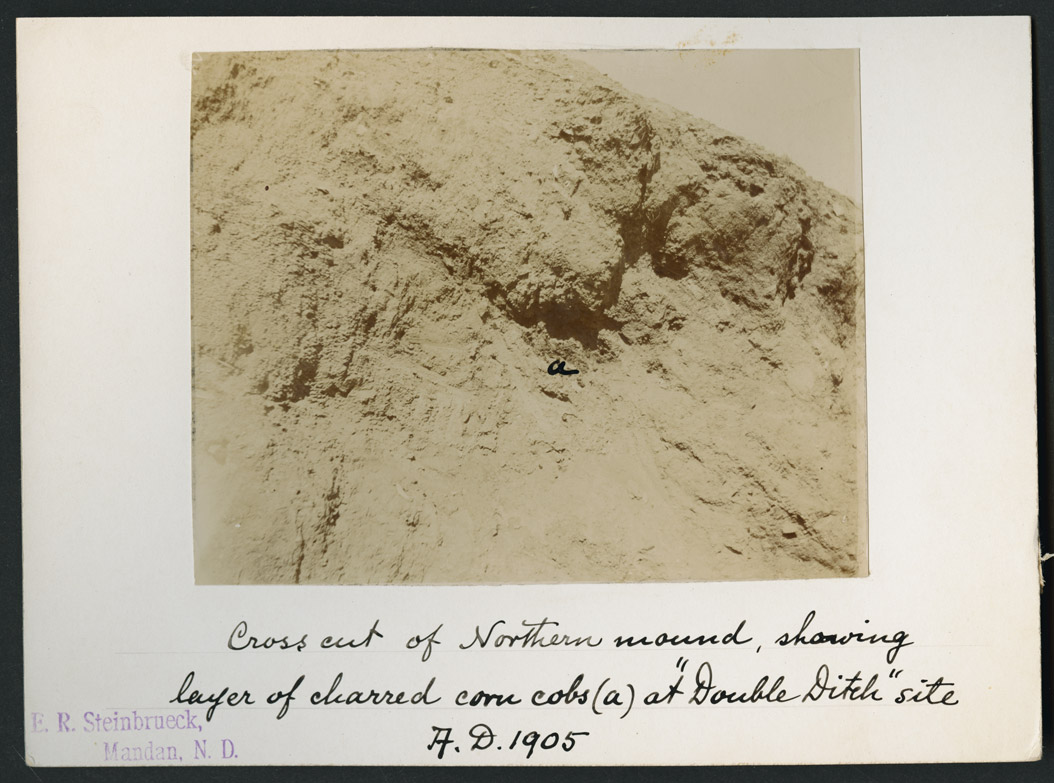 Image 34: This photograph of an excavated mound at Double Ditch shows a layer of charred corn. This is proof that the people who lived there cooked and ate corn as part of their diet. Remnants of corn found in the cache pits and garden tools tell us that the residents of Double Ditch raised corn in their gardens. SHSND A1253.

Before they graduated from college, George Will and his classmates published a book about their studies. The book, titled The Mandans, included a thorough history of European American visits to the Mandan villages, a report on the excavations of 1905, and a study of the Mandan language. (See Image 35) 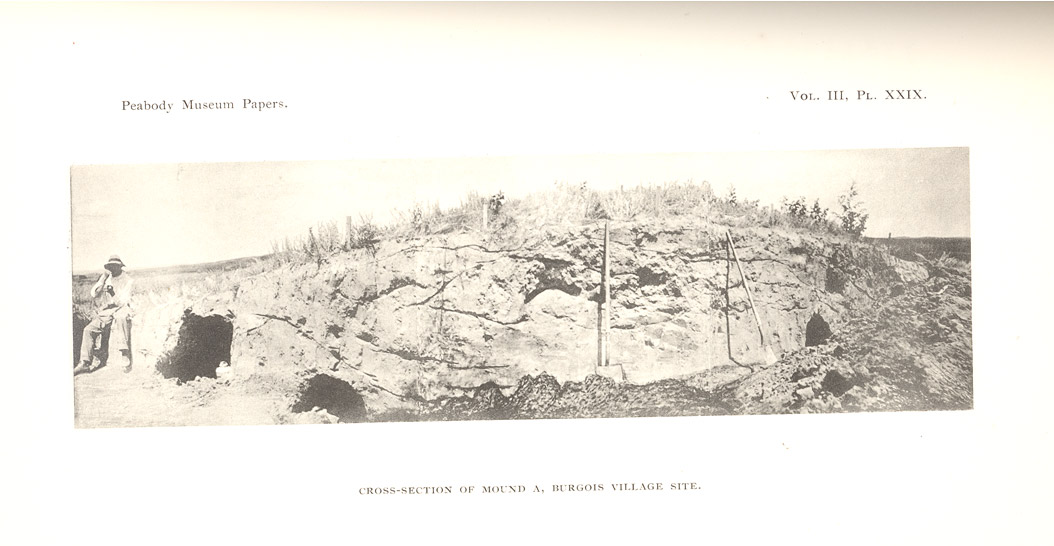 Image 35: This is one of the mounds at Double Ditch earthlodge village that George Will and his fellow archeologists excavated in 1905. By digging into a the mound in such a way that created a cross-section, the archeologists could see the layers of dirt and materials that were poured into the mound over the hundreds of years that the site was occupied. Here they found bits of bone, pottery, and other objects which were created by the people who lived at Double Ditch village hundreds of years ago. George Will, The Mandans, p. 154.

George Will maintained a life-long interest in archeology and history. In 1910, he studied another earthlodge village site near the mouth of Apple Creek south of Bismarck. That site had been farmed by the present owners and did not provide the archeologists with as much information as they had found at Double Ditch.

By the end of his life, George Will had written and published dozens of books and articles about the pre-history and the history of North Dakota, in addition to dozens more books about horticulture and agriculture. Will combined his interests in archeology, anthropology, and horticulture to write Corn Among the Indians of the Upper Missouri (1917.)   This book is still considered an important resource on the history of corn as it was raised and used by American Indians of this region. Will also wrote the first translation of Military Life in Dakota: The Journal of Philippe Regis de Trobriand, the important memoir of General Regis de Trobriand. The book was originally written in French.

Why is this important?  Among the early archeologists, historians, anthropologists, and linguists who studied and preserved the culture of the native peoples of this region, George Will is the only one who was born and lived in North Dakota. His education prepared him to take the interests of his childhood and turn them into lifelong work. His books and records of his earthlodge studies help us understand the distant past and remain valuable resources for modern archeologists, horticulturalists, and historians.