Gilbert Livingston Wilson (1869-1930) was an ordained Presbyterian minister. Like so many other scholars of his day, he had another passion besides the ministry. He had a deep interest in the lifeways (also called ethnography) and history of the Hidatsa Indians.

Wilson was born in Springfield, Ohio. He graduated from Princeton Theological Seminary in 1899. His earliest church assignments were in Moorhead, Minnesota, Mandan, and Langdon, North Dakota. In 1907, he returned to Minnesota and ministered to churches there until 1930. 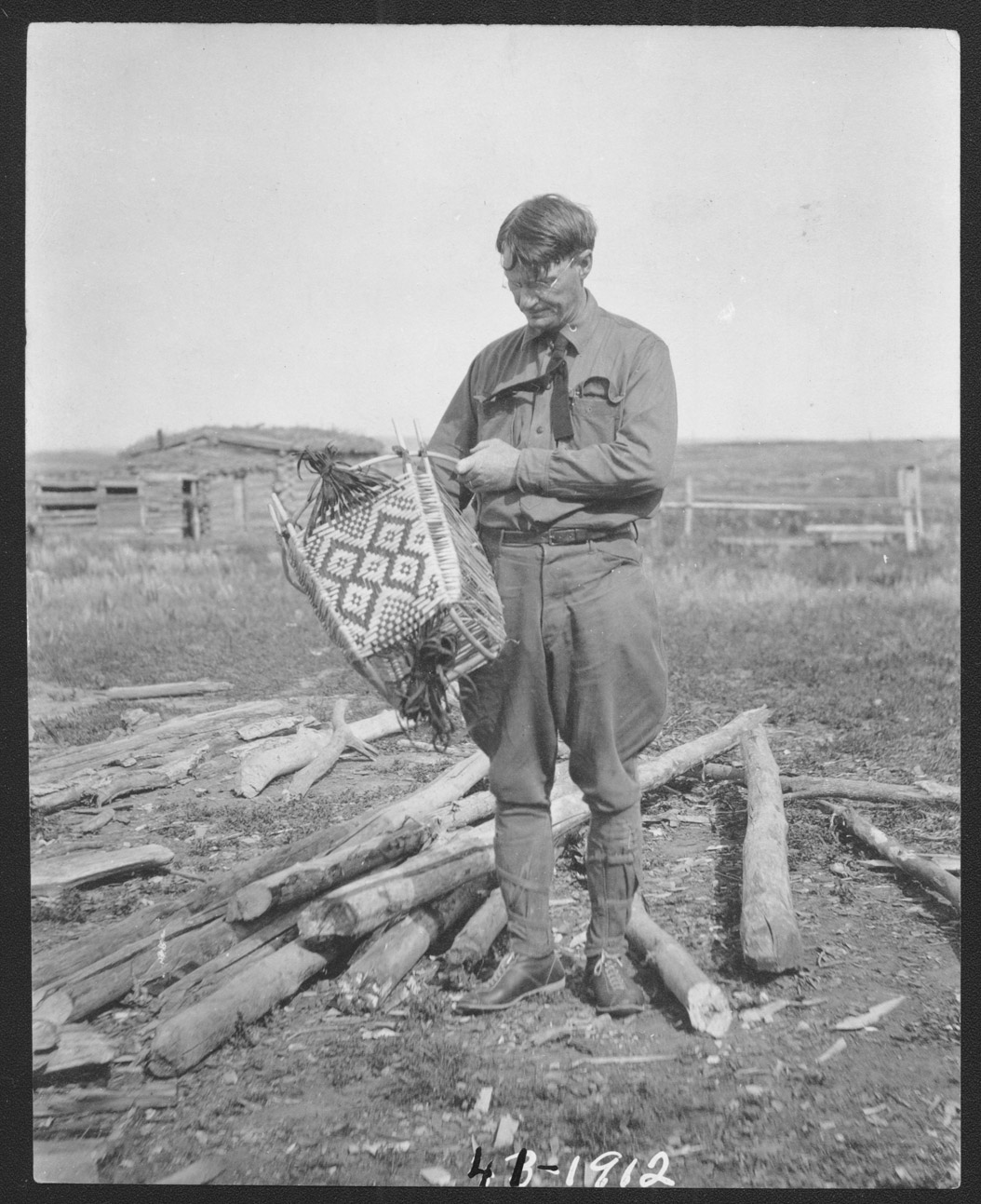 Image 24: Gilbert Wilson looks at a Hidatsa burden basket on the Fort Berthold Reservation. The basket is not quite finished. Wilson’s brother Fred drew pictures of baskets and other objects show how they looked and how they were made. SHSND 0086-0036

As a boy, Gilbert Wilson enjoyed learning more about American Indians and their stories. After he became minister of the Presbyterian church in Mandan, he spent his spare time at Standing Rock and Fort Berthold reservations collecting Indian myths. He published two collections of these stories for young children.

An important scholar named Clark Wissler heard about Wilson’s studies. Wissler, who worked at the American Museum of Natural History in New York City, provided funding to send Wilson and his brother Frederick (an artist) to Fort Berthold Reservation each summer for nine years to record the ethnography of the Hidatsa, Mandan, and Arikara. At Fort Berthold, Wilson met and befriended Edward Goodbird who introduced Wilson to Buffalo Bird Woman (Goodbird’s mother) and her brother Wolf Chief. These five people created an extraordinary record of life among the Hidatsa during the time of Buffalo Bird Woman’s life  along with her memories of her mother’s and grandmother’s lives.

Wilson’s studies resulted in several books. Among the most important of these are Buffalo Bird Woman’s autobiography, Waheenee; Edward Goodbird’s autobiography, Goodbird The Indian; and Agriculture of the Hidatsa Indians (recently re-published as Buffalo Bird Woman’s Garden.)  Wilson also studied and wrote about many of the traditions and skills of the Hidatsa. His studies led to more books about how to trap eagles, how to build an earthlodge, and the role of dogs and horses among the Hidatsa. In addition, Wilson’s notes, including drawings and photographs, fill 16 large notebooks. The notes are still today an important resource for scholars. (See Image 24)

Wilson’s studies were (and still are) considered “masterpieces in all anthropological literature.”  An early anthropologist noted Wilson “was a superb observer.”  Wilson’s method was to let the people speak about their own lives. He respected them enough to let them tell their own stories. The American Museum of Natural History published Wilson’s report on the dog and horse in Hidatsa culture with this explanation:

In all his work Doctor Wilson has looked upon the narrative, and the demonstrations accompanying it, as true data, to be set down as they came. Further, his method was to control the narrators as little as possible, merely holding them to the description of actual personal experiences.

Wilson earned a doctoral degree from the University of Minnesota in 1916. Perhaps more important to the Wilson brothers was the honor of becoming the adopted sons of Buffalo Bird Woman and members of the Prairie Chicken clan. Gilbert was given the new name Yellow Chicken.

Why is this important? Wilson not only left an exceptional record of ethnographic information on the Hidatsas, the Mandans, and the Lakotas, he developed a new method of study that placed the informant (the person talking to him) at the center of the study.

Gilbert L. Wilson, The Horse and the Dog in Hidatsa Culture. Anthropological Papers of the American Museum of Natural History 15: 125-311.