Washington Matthews was born in Ireland in 1843. His father was a doctor. His mother died when Washington was very young.

After Washington’s mother died, his father brought the family to Wisconsin in the United States for a few years. Dr. Matthews returned to England, but came back to the United States in 1851. This time the family settled in the frontier town of Dubuque, Iowa. Washington studied “Latin, Natural Philosophy,” and other academic courses in school. He finished high school and went to medical school at the University of Iowa.

The Civil War was underway in 1864, so Washington Matthews enlisted in the Army medical service. After the war, Congress made the Army much smaller. Matthews was mustered out of service, but with his medical degree, he was hired as a contract surgeon with the Army. He was sent to Fort Union, Montana on his first assignment. For the next several years, he served at Fort Berthold, Fort Stevenson, Fort Buford, and Fort Rice in Dakota Territory. During his career, he also served in California and New Mexico.

Washington Matthews was fascinated by the Indians he met in the Northwest. He called them “wild and unsubdued.”  The three tribes of Fort Berthold were the first to gain his attention. In 1865, the Mandan, Arikara, and Hidatsa had just created a new village, called Like-A-Fishhook, on the banks of the Missouri River. The three tribes had been reduced by disease and warfare to just a few thousand people.

Living at nearby forts, Matthews was in close contact with the people of the three tribes for several years. He learned the Hidatsa language and wrote the Grammar and Dictionary of the Hidatsa and the Hidatsa (Minnetaree) English Dictionary. He learned the language so well that when his notes for these books were destroyed by fire at Fort Buford in 1871, he re-wrote the dictionaries from the knowledge he had stored in his mind. The Grammar and Dictionary was published in 1873. These books were considered the finest dictionaries of the Hidatsa language for many decades.

By 1877, Mathews’ knowledge of the Hidatsa had expanded greatly. He wrote and published an article in 1877 on Hidatsa lifeways (ethnography) and language. So important was this study that the University of Iowa awarded Matthews an honorary doctoral degree in 1888.

In addition to his studies of the Hidatsas, Matthews was also a careful observer of Army life. It was his duty to keep records on the physical condition of Army posts and the health of the soldiers. His records are thorough and provide historians with an excellent view of life in a remote Army post.

Among Mathews’ works, the most important was ­his Grammar and Dictionary. Ferdinand V. Hayden, U. S. Geologist who was affiliated with the Smithsonian Institution, considered Mathews’ studies of the Hidatsa to be

“the most important memoir on our aboriginal Indian languages which has appeared since the Dakota Grammar and dictionary by Rev. S. R. Riggs. . . .”

Why is this important?  When Washington Matthews arrived at Fort Berthold, the Hidatsas, Mandans, and Arikaras had already undergone serious losses. Disease, especially small pox, had taken thousands of lives. Washington Matthews and many other Army officers and visitors to the region recognized that these cultures were threatened by continuing warfare, poverty, and the presence of more and more non-Indians who reduced the three tribes’ resources.

We don’t know if Matthews intended to preserve the language and lifeways of the Hidatsas because he believed that their culture might disappear altogether. In fact, Matthews never states why he thinks this study was worth pursuing. However, we are fortunate to have these documents of the Hidatsa culture that preserve for us not only language, but history at a time of great change on the Northern Great Plains. If we study the dictionary, we might learn to say,hokahe. 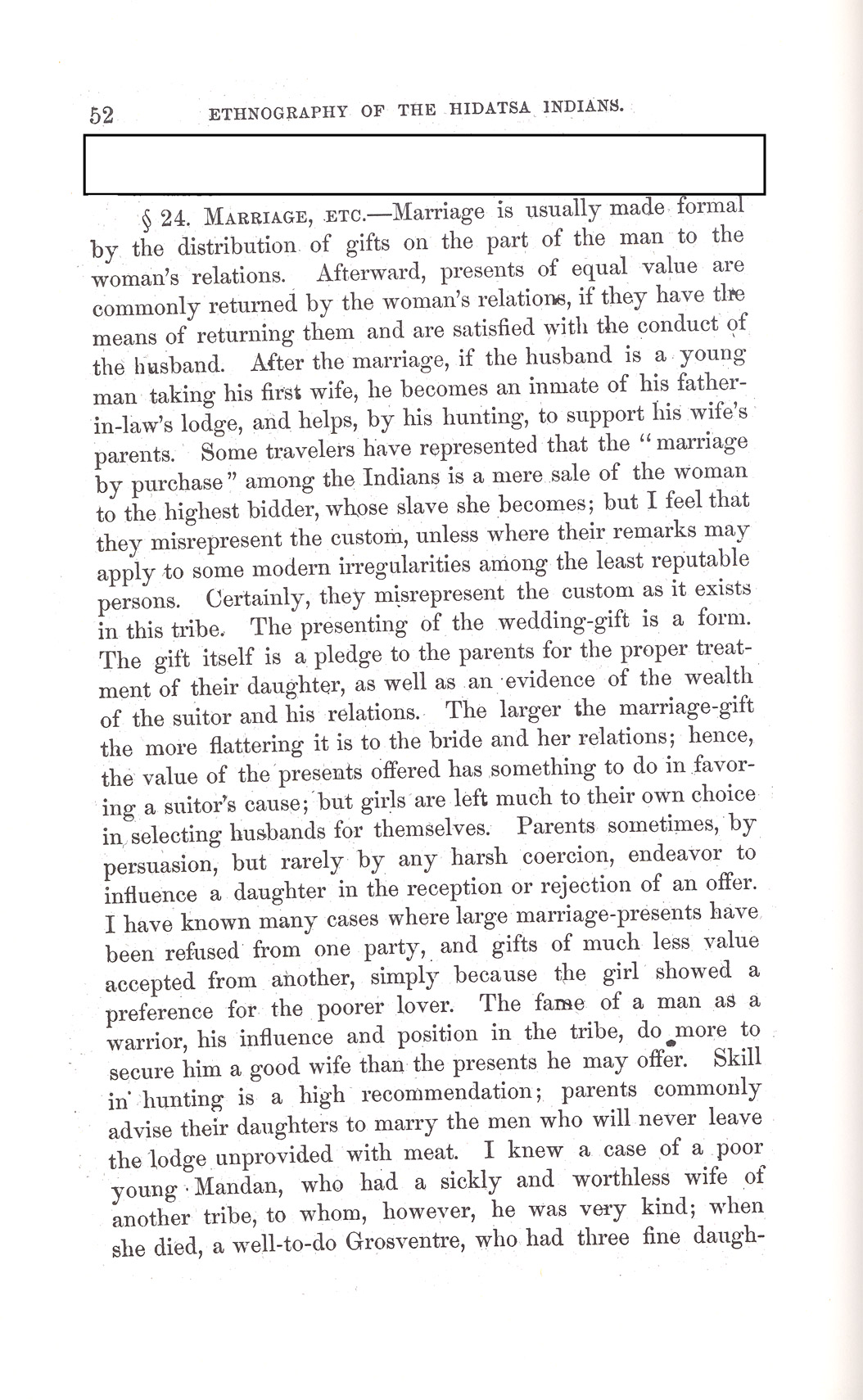 Document 1: This excerpt from Washington Matthews’ Ethnography and Philology of the Hidatsa Indians tells a little about his approach to anthropology. He challenges a widespread idea that Indians actually purchased their wives. You can read the rest of this section online: http://archive.org/details/ethnographyandp01mattgoog

Document 2: This is a small portion of Washington Matthews’ Hidatsa dictionary. You can see the rest of the dictionary online: http://archive.org/details/grammardictionar00matt

You can read some of Washington Mathews’ publications about the Hidatsas and Mandans at Internet Archive.org: