In 1881, a young man arrived in Bismarck. (See Image 8) He, like so many others in Dakota Territory, brought a little experience, very little money, and big dreams. His name was Oscar Will (1855-1917.)  More than any other individual, he was responsible for preserving the botanical history, literally the seeds, of the first horticulturalists on the northern Great Plains. (See Document 5) 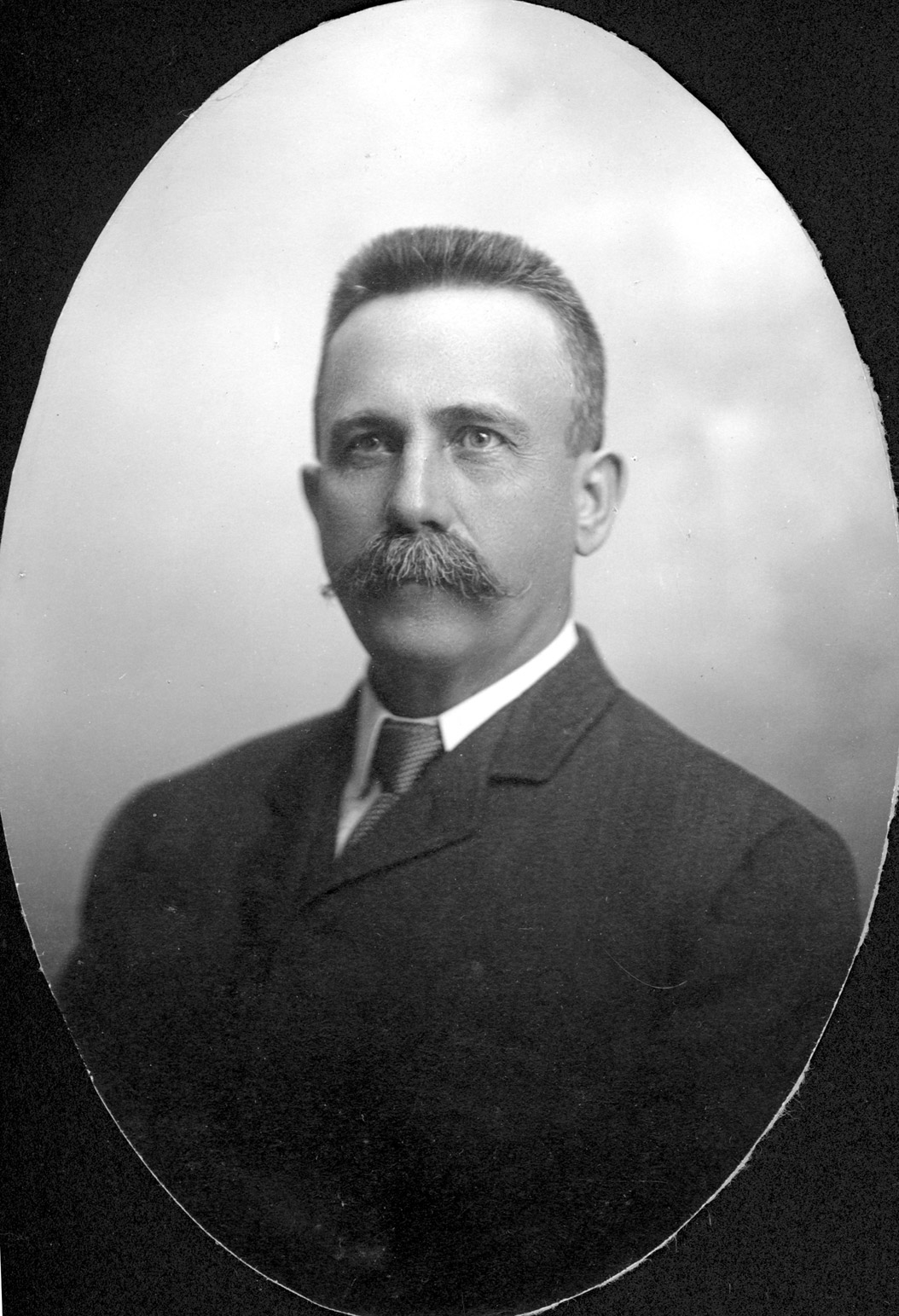 Image 8: Oscar Will, the founder of the Oscar H. Will Seed Company. After receiving a gift of corn from the Mandans, Will developed new strains of corn for north Plains farms.

Document 5: Oscar’s son George Will worked for his father’s seed company. He took an interest in Bismarck’s history and his family’s role in the developing city. Many years after Oscar Will died, George reflected on his father’s contribution to the city of Bismarck. 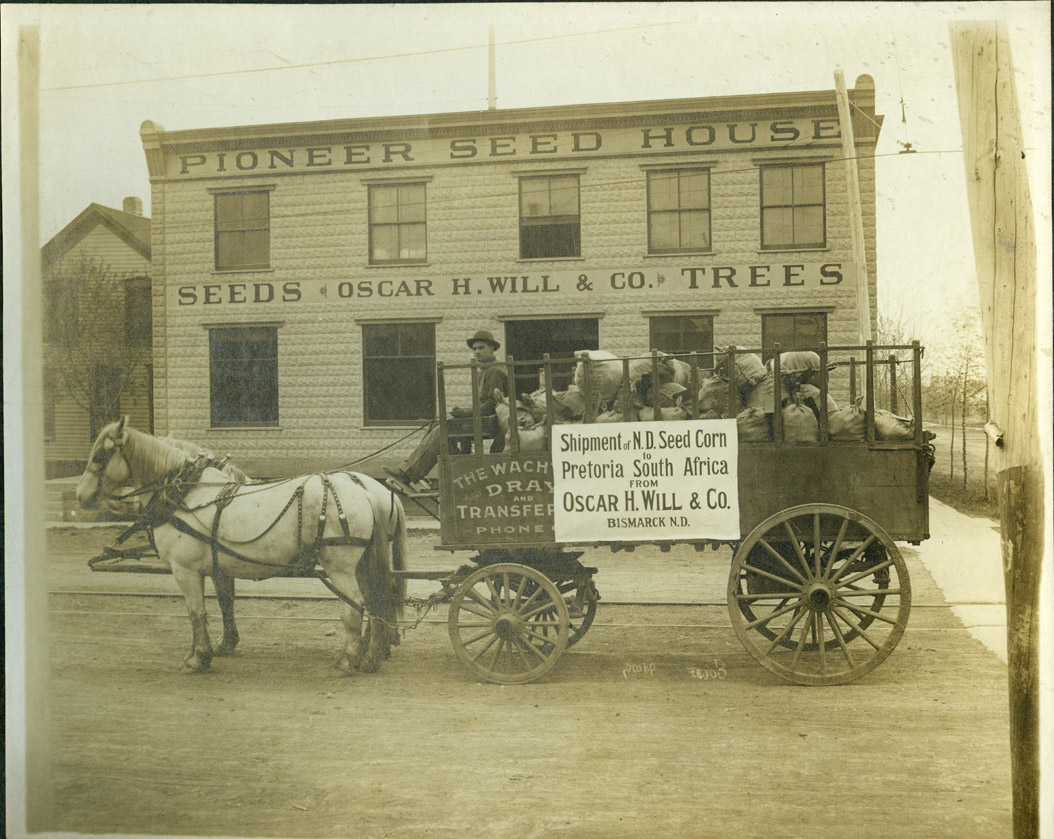 Oscar Will grew up in New York where he worked in plant nurseries. When he arrived in Bismarck, he went to work for Fuller’s Bismarck Greenhouses and Nursery. Fuller was raising trees for farmers who wanted to plant trees on a Timber Culture Claim. In 1882, Will purchased the company. He expanded the nursery to include flowers, vegetable seeds, and farm seeds. (See Image 9) In 1884, Will mailed 1,000 copies of his first catalog to his customers. He had started a company that would last for 75 years with customers all over the United States. (See Image 10)

We don’t know how Oscar Will came to meet members of the Mandan, Hidatsa, and Arikara tribes. However, we do know that Oscar H. Will Company was soon selling a variety of corn called Indian Sweet Corn. By 1920, Indian Sweet Corn was called Nuetta in the Will catalog. (See Image 11) Nuetta comes from a Mandan word. Will’s son George described the corn and its origins in the 1922 Oscar H. Will Company catalog.

The most prolific and hardiest Sweet Corn in the world, a North Dakota Native product. Our original seed was obtained from a Mandan Indian and we have selected it for the past nine years. . . . It is the most productive variety we have and bears several ears to a stalk. 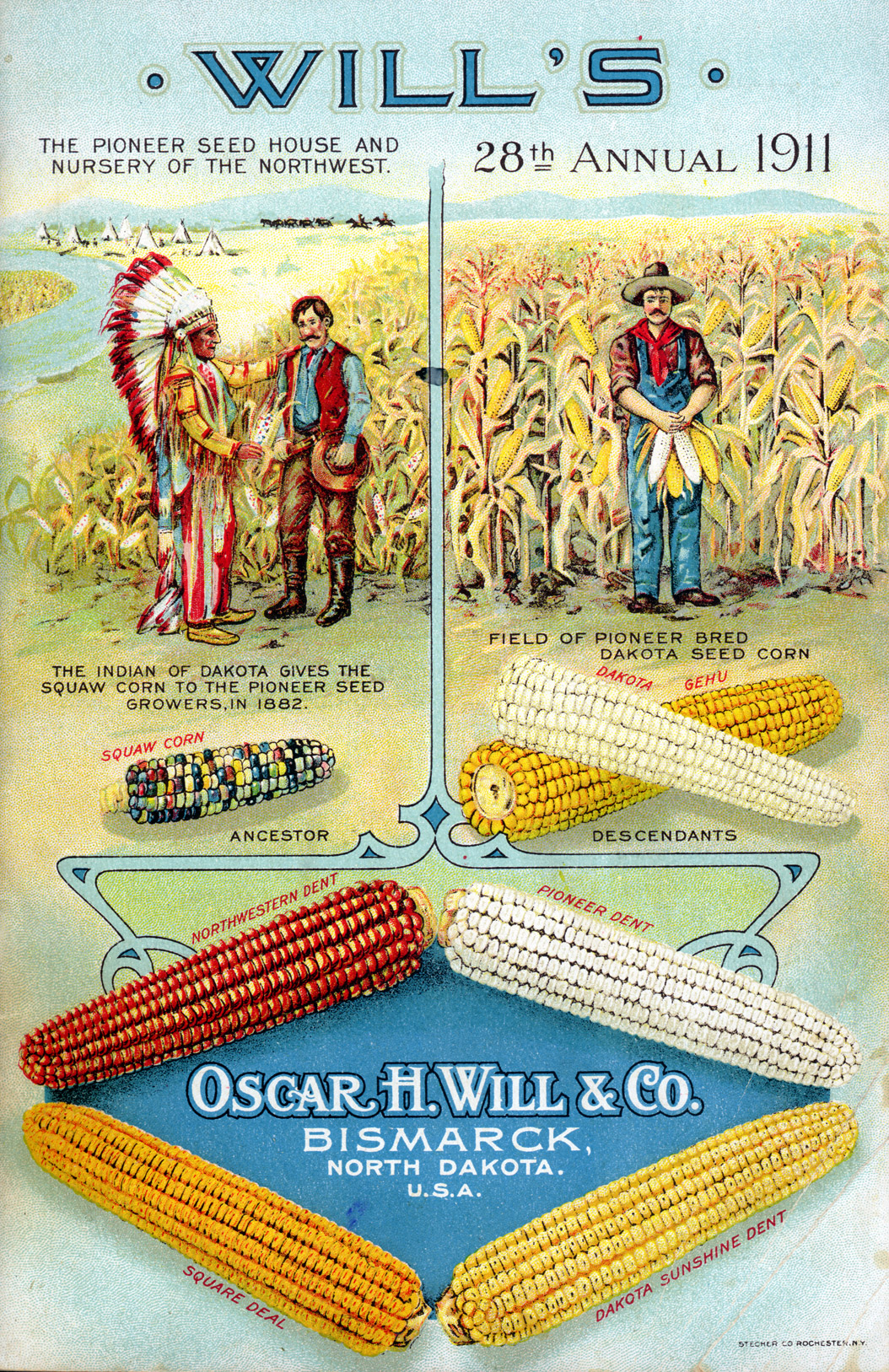 Image 10: Oscar and George Will liked to feature historical images on the covers of the seed catalog. The 1911 catalog shows a white man (perhaps it was Oscar Will) receiving an ear of corn from a Mandan Indian. Both portraits show a stereotype of the Indian and the pioneer. Oscar Will told about receiving corn from the Mandans, but it is unlikely that anyone was wearing a full feathered headdress at that meeting. The tipis in the background were painted by someone unfamiliar with the Mandan earthlodge villages. However, the pictures represent the transfer of corn genetics. The Indian man hands to the pioneer man an ear of corn that was the result of careful selection by Mandan, Arikara, and Hidatsa women over a period of centuries. Oscar Will utilized this corn in developing varieties of field corn (Gehu, Pioneer Dent, etc) that would suit growing conditions in North Dakota. SHSND 10190-1911. 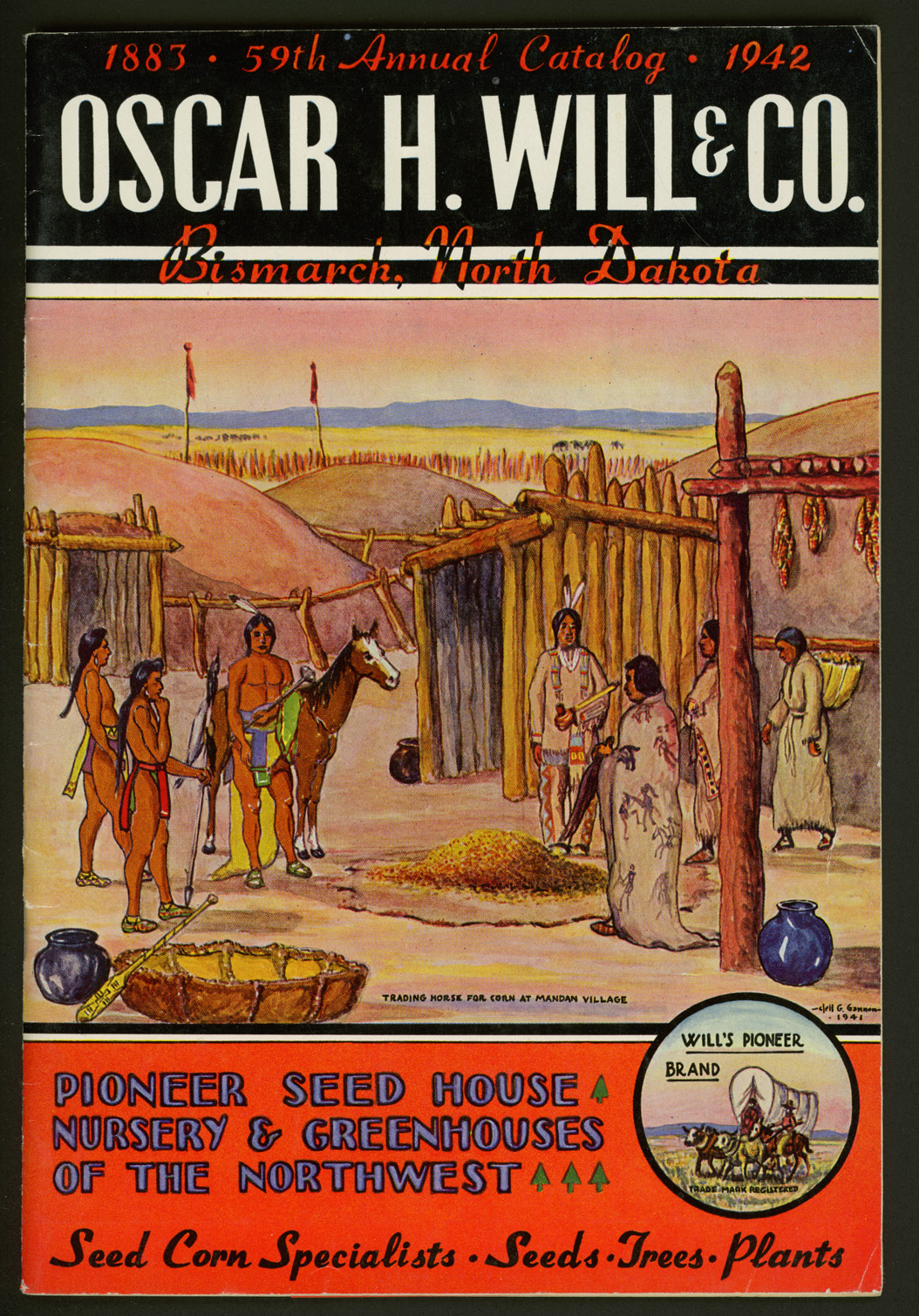 Image 11: The Oscar H. Will & Company catalog for 1942 featured a painting by Bismarck artist Clell Gannon. In this image, corn is an important trade item long before European Americans had begun to settle North Dakota. We know the value of corn is high because a man has brought a horse to trade for corn. Horses were extremely valuable trade items, too. SHSND 10190-1942.

Oscar Will and his son George also selected and sold bean varieties they originally received from the Arikaras, Mandans, and Hidatsas. Great Northern beans and Arikara Yellow beans came from the people of Fort Berthold. These are dry bean varieties that store well. Dried beans were particularly important before foods were canned or refrigerated. Today, we might eat Great Northern beans or another variety in bean soup or pork-and-beans.

Why is this important?  The Oscar H. Will Seed Company remained in business until 1959. During that time, the germ (or living part) of the seeds that Will selected were incorporated into many of his sweet corn and field corn varieties. People all over North America planted varieties of corn, beans, and other vegetables that Will had originally obtained from the Mandans, Arikaras, and Hidatsas.

As late the mid-1870s, Americans were vigorously debating whether farmers could support their families on a farm situated on the northern Great Plains. Will’s nursery proved beyond a doubt that agriculture and horticulture could succeed in this region as long as farmers and gardeners planted seed varieties that were developed for early maturation and for hardiness against frost.