When Frances Densmore (1867 – 1957) was a young girl in Minnesota in the 1870s, she lived near a Dakota village. She often heard the Dakotas singing. She loved music, and the traditional songs of the Dakotas influenced her later career.

Frances Densmore studied music after she finished high school. She taught piano lessons in St. Paul, Minnesota. Her interest in the music of the American Indians of Minnesota continued. She visited events where the Ojibwe (Chippewa) and Dakotas were performing their songs. She was inspired by their music and the example of anthropologist Alice FletcherAlice Fletcher was an early anthropologist who lived and worked among the Omaha, Nez Perce, and Lapwai Indians from the 1880s to 1923. She also helped to prepare the tribes for allotment, or the distribution of reservation lands to individual families. Fletcher published many articles on the tribes she studied. Her special interest was in music and dances. She earned a reputation as a prominent anthropologist for her many years of study. to study the “history and customs of American Indians.”  As she became more familiar with the music of American Indians, she began to transcribe (write the music on paper) their songs.

By 1905, Frances DensmoreDensmore’s second recording machine was a Columbia gramophone. She continued to use this machine until 1940. These early recording machines were powered by a spring, so Densmore referred to them as a “spring phonograph.” She faced many technical difficulties to make sure that the recordings were faithful to the songs she heard. She recorded her pitch pipe on a disk to be sure that the speed of recording was accurate. She later oversaw the transfer of recordings from the wax cylinders to vinyl records.
In 1997, Makoche Studios (http://makochestudio.com/restoration.html) in Bismarck restored the wax recordings and digitized many of the recordings that Densmore made at Standing Rock. These recordings have preserved an important part of Lakota culture. Today, Lakota singers such as Kevin Locke refer to Densmore’s recordings to learn and continue to preserve the songs that Frances Densmore recorded in 1910. believed that it was important to write down the songs of the Chippewa of Minnesota. She also recorded the songs, so she could study the music closely. With the financial help of the Smithsonian Institution, she bought a “spring phonograph” that she could take to reservations.  In 1907, the Edison Home Phonograph was state-of-the-art recording equipment. Her first recordings were made at White Earth Chippewa Reservation in western Minnesota.

In 1911, while recording Chippewa songs in Minnesota, Frances Densmore met several Dakotas from the Sisseton Reservation. They invited her to come to the Sisseton reservation to record Dakota songs. Densmore faced a few problems at Sisseton, including the lack of a good interpreter,  so she decided that she should continue the project at Standing Rock reservation. From 1911 to 1914, Frances Densmore worked with Lakota men and women to record and preserve their music. In 1915, with the help of Reverend Charles Hall, Densmore began to record songs of the Hidatsas and Mandans at Fort Berthold. (See Image 25) 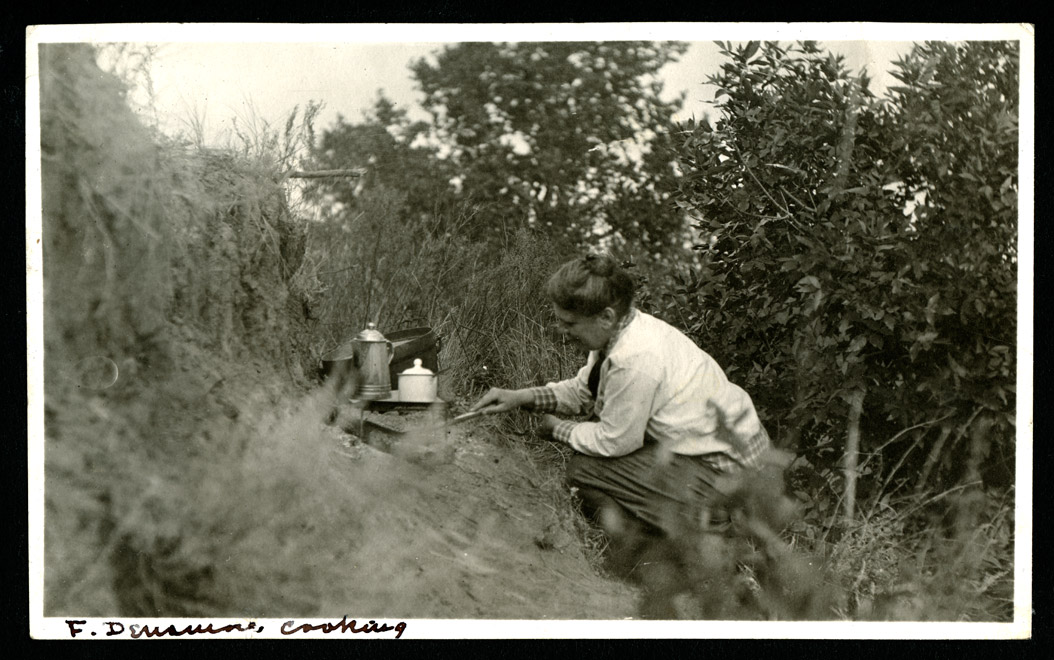 Image 25: Frances Densmore pursued her interests wherever they took her. She lived in tents, shacks, and traveled by horse or wagon to get to the place where she could record the music of the tribes she visited. Here she is preparing a meal while camping at Fort Berthold Indian Reservation.SHSND 0270-Album-p19-46.

Densmore understood that she had to do more than record the songs. She had to know why the songs were composed and who sang them. She needed to know the circumstances for singing the songs. As she listened to Lakotas talk about their songs, she took notes. When she published articles about the songs, she was able to give a great deal of background on the songs as well as a written transcription of the music. For the most part, her wax cylinder recordings remained in the archives at the Smithsonian Institution. They were later transferred to the Library of Congress.

Frances Densmore recorded the music of the Hidatsas, Mandans, Maidus, Arapahos, Cheyennes, and other tribes. While her work was scholarly, she thought it was very important to bring more knowledge about American Indians to the general public. She was concerned that school children learned much mis-information about the history and culture of American Indians. Using songs of American Indians in the classroom would help to improve children’s understanding of American Indian cultures.

Movies usually based their Indian characters on stereotypes that were far from realistic. Densmore hoped that her studies of American Indian music would correct the simple “tom-tom” rhythms that were associated with Indians in the movies. Densmore wrote that “there is danger that the future will form its opinions of Indians from the sentimental movies and the theater music when the Indian is seen through the bushes.”

Why is this important?  Frances Densmore decided to record, preserve, and understand the music of American Indians. She pursued her work at a time when American Indians were being told to give up their traditional songs, ceremonies, and customs. As the old people died, the old ways were lost. Densmore, like Gilbert Wilson and a few others, managed to save many aspects of Indian cultures.

Because of her recordings and her articles about American Indian songs, young American Indians today can reconstruct the ways of their ancestors. They can sing the songs and remember how important the songs were to their great-great-grandparents.

In 1911, the ethnomusicologistAn ethnomusicologist is someone who studies a particular group of people (an ethnic group) through their music. The term would not have been used when Frances Densmore was working at Standing Rock. The term is more widely used today. Frances Densmore began to record the songs of the Lakota on the Standing Rock Reservation. In order to be successful in her efforts she needed four things:  a good interpreter, a good building to work in, a comfortable place to stay, and singers willing to work with her. At Standing Rock, she found all four elements to help her make progress in her work. 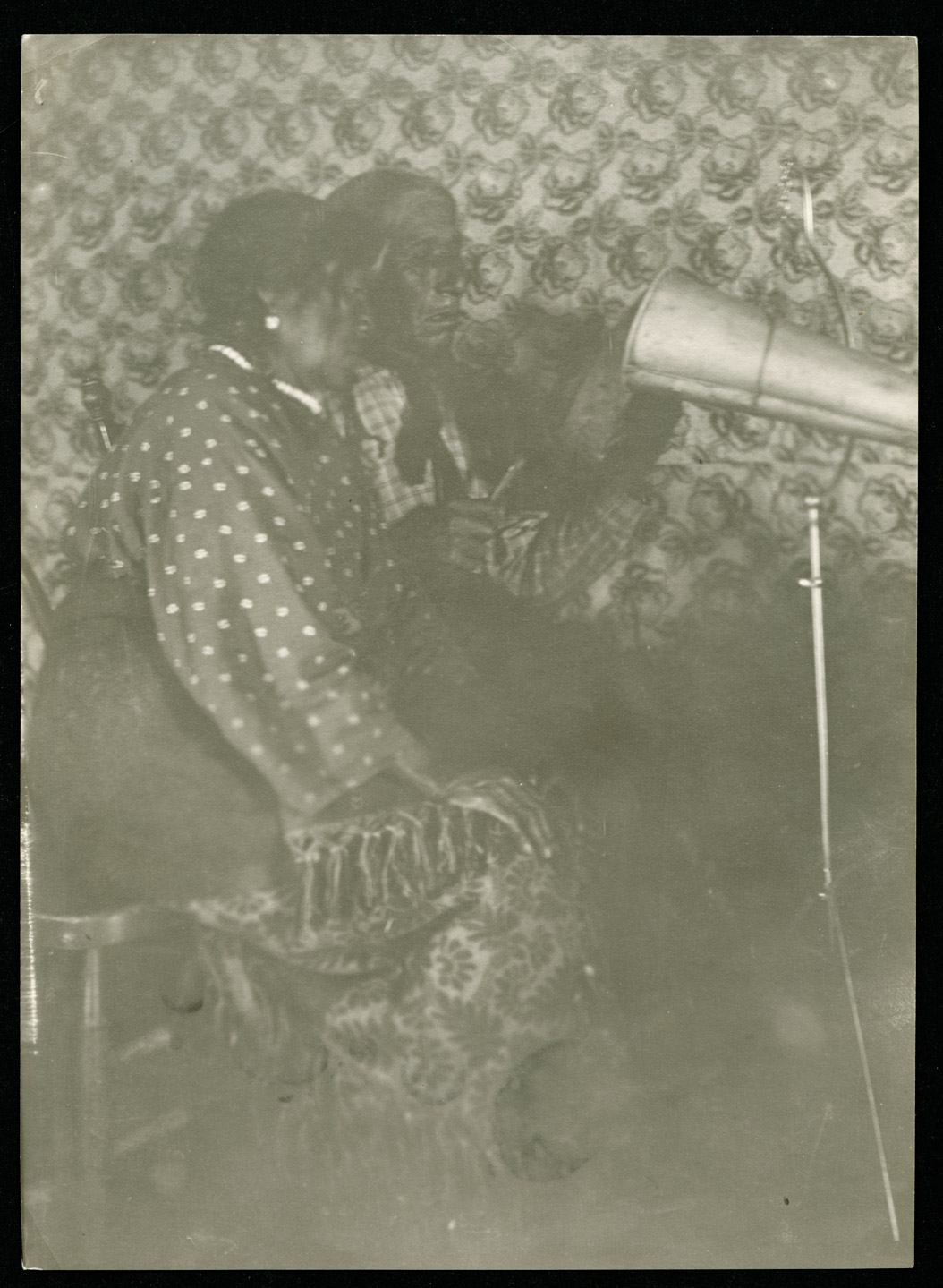 Image 26: Frances Densmore photographed Little Crow and his wife singing into the Victrola phonograph at her Fort Yates studio. SHSND A0147-0006-2.

Her “studio” at Standing Rock had been part of the Fort Yates kitchen at one time. It was falling apart in 1911. Most recently it had been used to store coal. With some help, she added doors and windows and papered the walls. She found packing boxes to use as tables. Densmore and the people who came to sing for her liked the little studio. (See Image 26) 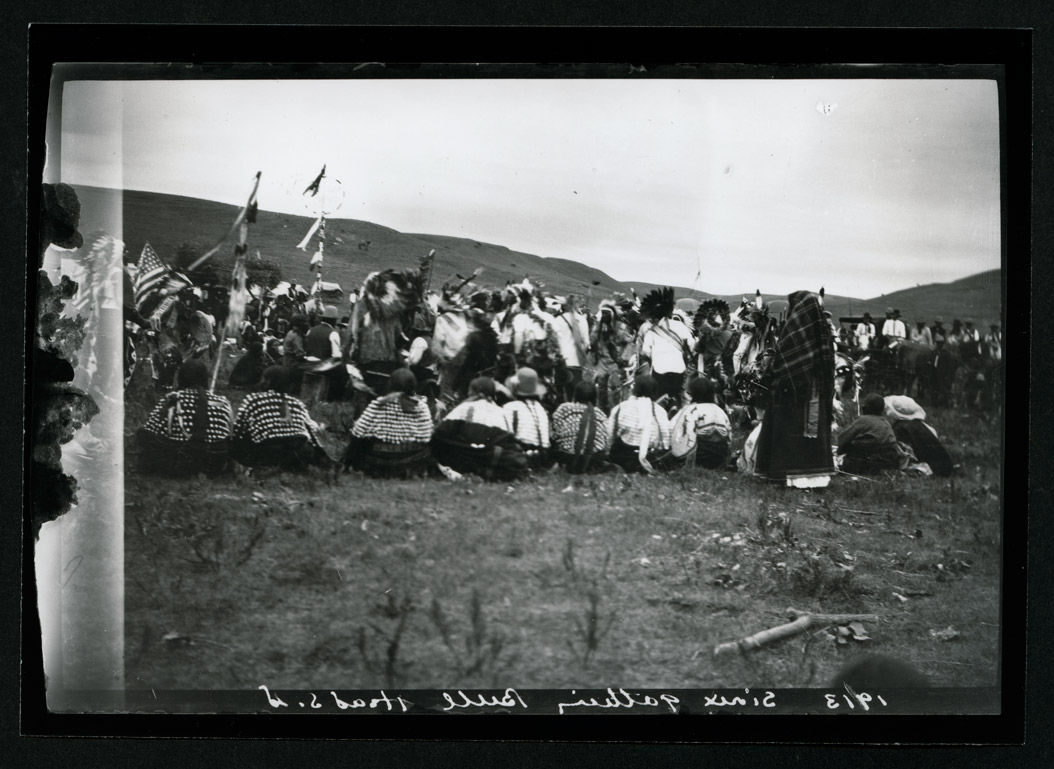 Image 27: Densmore photographed this dance on the Standing Rock reservation in 1913. To record the songs, she asked the singers to come to her studio and sing into her “spring phonograph.” SHSND 0270-117.

Densmore’s interpreter was Robert High Eagle. High Eagle was enrolled with the Lakota tribe at Standing Rock. As a young man, he had attended Hampton Institute. He also studied business at Carnegie College. He could speak both English and Lakota very well. Because he had grown up at Standing Rock, he was able to help Densmore understand the meaning of the songs she recorded. 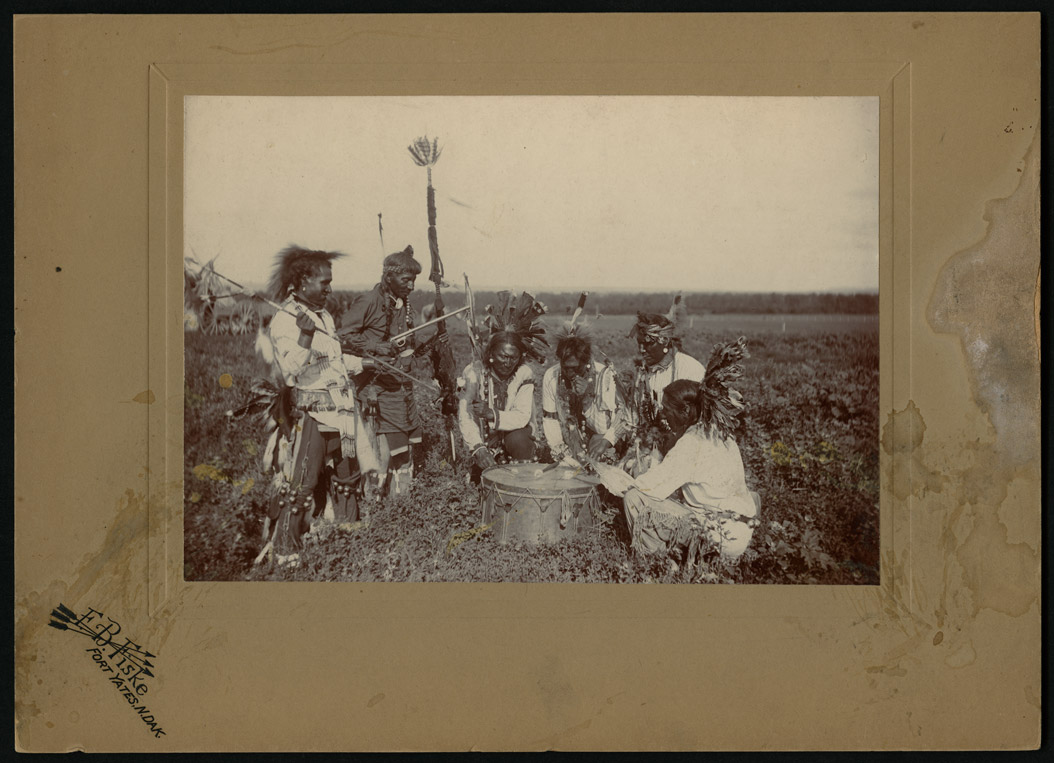 Image 28: These Lakota singers took Frances Densmore to the location of the last Sun Dance where they sang some of the Sun Dance songs for her and she photographed the event. The songs were recorded later in her studio. The singers in this photograph helped Densmore understand the circumstances (or context) in which the songs were originally sung. SHSND 1952-1610.

One of the military societies was the Kangiyu-ha, or Crow-owners. The crow was selected to be the symbol of this society because the members wanted their arrows to fly as straight as the crow. Only men who had been successful in battle could belong to the Crow-owners society. They would make a request for membership and then give a feast to the members of the society. The Crow-owners went into battle wearing shirts that had special sleeves. The sleeves were tied at the seam instead of sewn. When the warrior entered battle, he untied the sleeves so he had better use of his arms. The Crow-owners helped to protect the people when they moved their camp. They always kept watch for bison herds.

Frances Densmore recorded a song of the Crow-owners. This song was made to honor Sitting Crow who died in battle. The words to the song are: kola, kangi-iyo take, kola, ku sni yelo. In English, the words say: friends, Sitting Crow, friends, did not return.

Why is this important?  Teton Sioux Music by Frances Densmore is still the most important study of Lakota music since she wrote it in 1918. Densmore knew that recording the old songs was a very important part of preserving a culture that was facing enormous challenges. Her work has been revived in recent years with more sophisticated sound equipment. Makoche Studio in Bismarck has cleaned some of the original recordings to make them more useful to people who want to study the songs today.