The federal government did not have agricultural programs before 1933. There were a few federal efforts to manipulate international markets, but nothing like the farm programs the U.S. Department of Agriculture manages today. However, the effects of the Great Depression and the drought that plagued the central states during the 1930s created a great need for federal programs to aid farmers. To meet that need, President Franklin Roosevelt created the Agricultural Adjustment Administration (AAA) in 1933.

The AAA was part of President Franklin D. Roosevelt’s comprehensive series of programs to help Americans get jobs and to strengthen the economy that he called the New Deal. The AAA was also one of the “100 days” programs that were passed by Congress within a short time in 1933. Because the Agricultural Adjustment Administration was known by its initials, it was also one of Roosevelt’s “alphabet soup” programs. The AAA fundamentally changed American agriculture.

By 1933, farm crop prices had sagged to a very low level. Wheat sold for $1.22 per bushel in 1929 before the stock market crashed. By 1933, the price was $.25 (25 cents) per bushel. Overproduction was the problem. Prices had been low since 1920, so farmers had planted more acres to make up for the low prices. That resulted in a “glut,” or overabundance of wheat on the market. When there is too much of a crop on the market, the price goes down. This is known as the economic law of supply and demand. By 1933, drought had hit farmers in the Great Plains, but there was still too much wheat in storage. The drought curbed production naturally, but the prices did not rise. During the 1930s, farm income dropped by nearly 50 per cent. Farmers were poor.What did it mean to be poor on a North Dakota farm in the 1930s? Some farm families had very little cash, but, if they could raise a garden, they would have enough to eat. Some farm women planted their gardens downhill from the livestock watering tank, so the overflowing water would help their garden vegetables grow. Farm families with a pond or a small stream raised ducks and geese for the table.
On the other hand, if the farm had no extra water, a garden would dry up in the heat of summer. If the farm was mortgaged (the farmer owed money to the bank), the debt took the extra money the farmer might acquire. It was possible the bank would foreclose which means that the bank would take the farm as payment on the loan. If the farmer’s equipment or livestock was old, there was no extra money during the 1930s to purchase new, productive equipment or livestock. If there was not enough hay, the livestock starved and had no value at market.
Under these circumstances, it is not surprising that young people left the farm as soon as they were old enough. If they were lucky, they could find a position in a federal work program such as the CCC or WPA. Of course, with the young people gone, the older folks had a lot of work to do. Every year, they hoped and prayed for rain, so they plowed and planted, and harvested what they could. If they could hold onto the land for a few more years, weather and markets were bound to improve. But, too often, the family and the community did not recover from years of poverty.

Image 8: The AAA took farm land out of production. The idea was to raise farm prices by creating a shortage of wheat. However, the drought, too, caused a shortage of wheat and other farm crops. This farmer is making silage (cattle feed) out of Russian thistle (tumbleweeds). Though cattle did not enjoy eating Russian thistle, they would eat it if nothing else was available. SHSND 2012-P-006-100

Roosevelt designed the AAA to help farmers keep their farms and feed their families. The program would, he hoped, force market prices upwards, because the AAA created wheat shortages. Each farmer who participated in the program signed a contract stating that he would reduce his crop acreage by as much as 20 per cent. The federal government paid the farmer “rent” on the land that was not farmed. The rent money came from a tax on wheat processors. (See Image 8.) 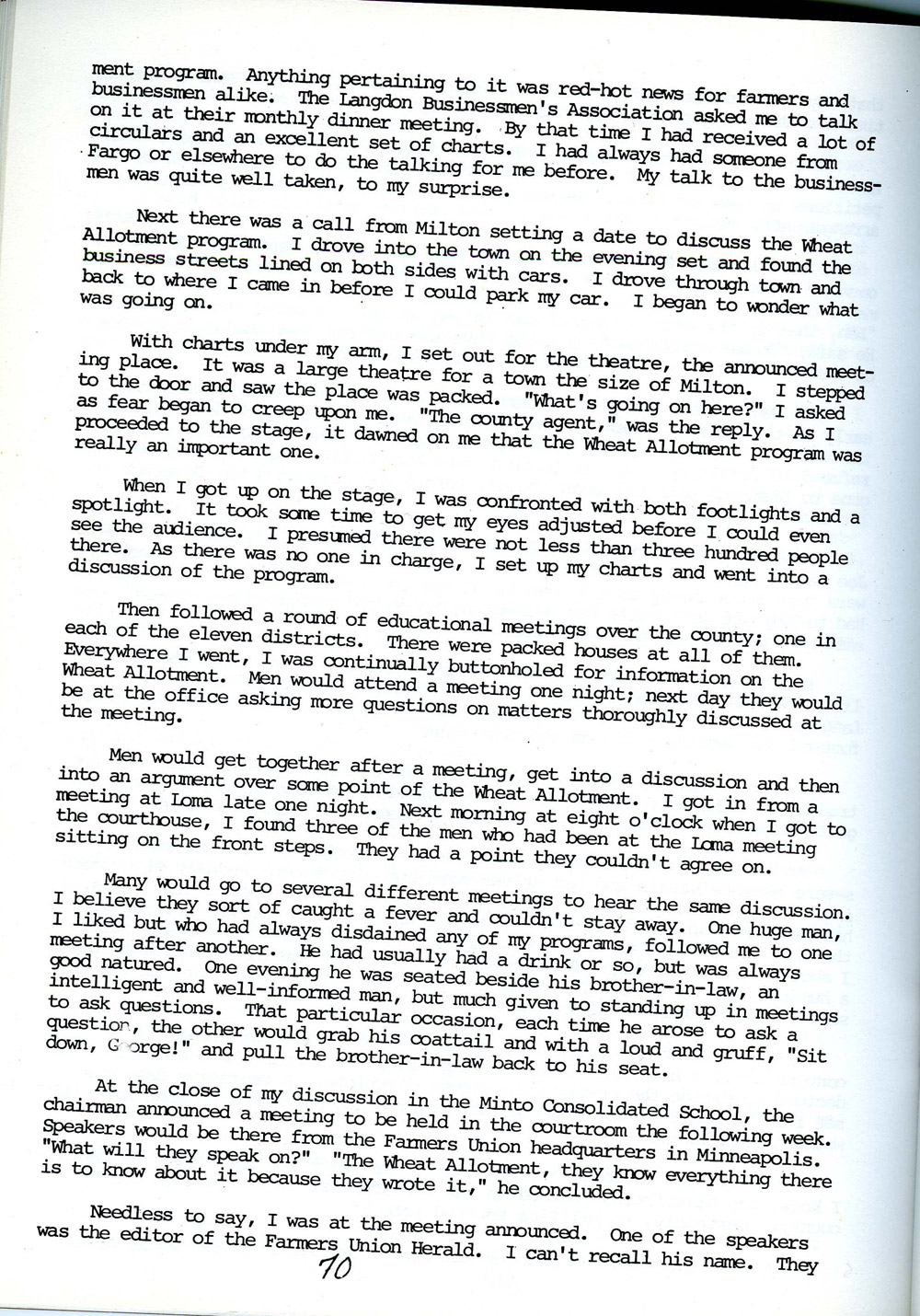 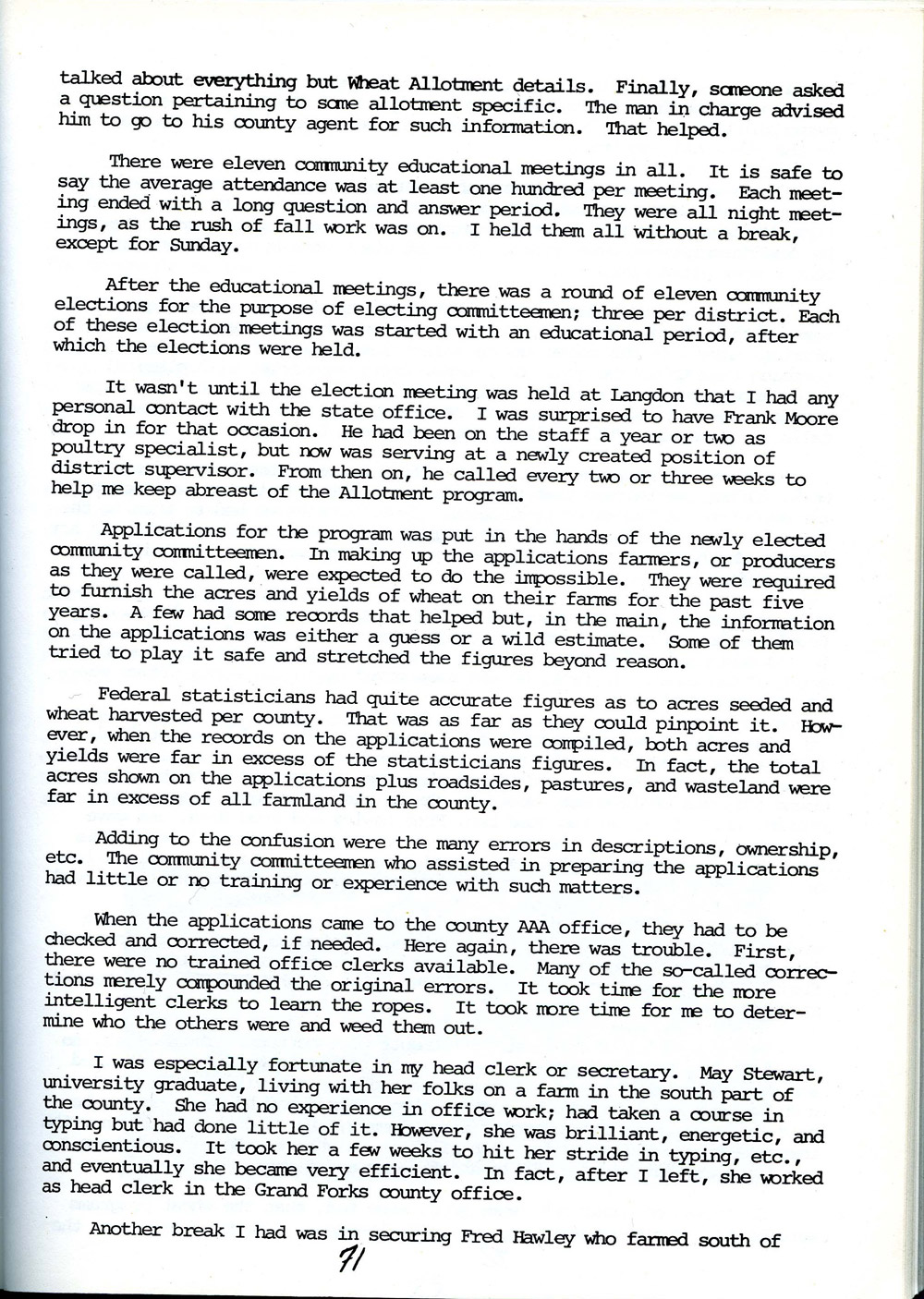 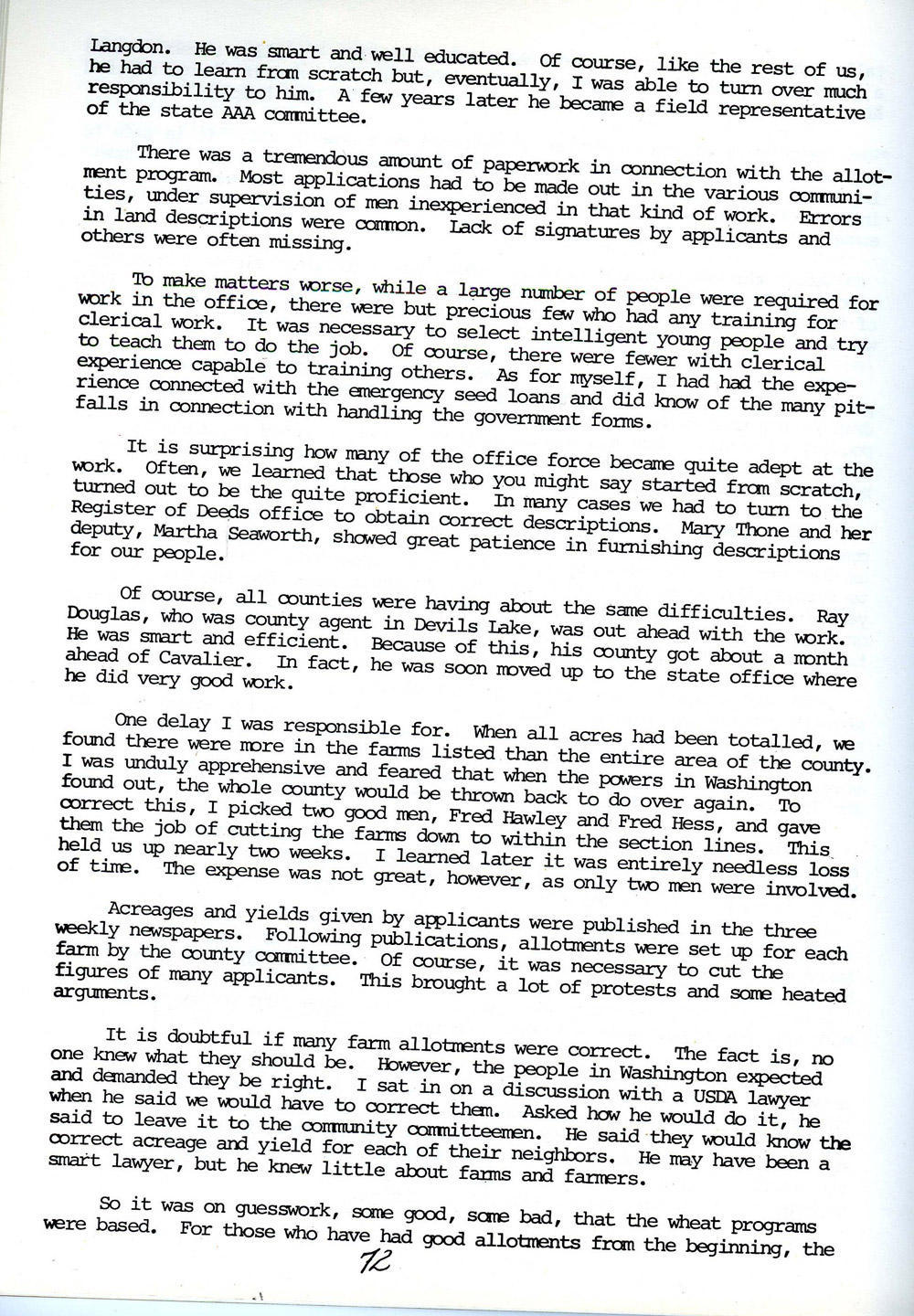 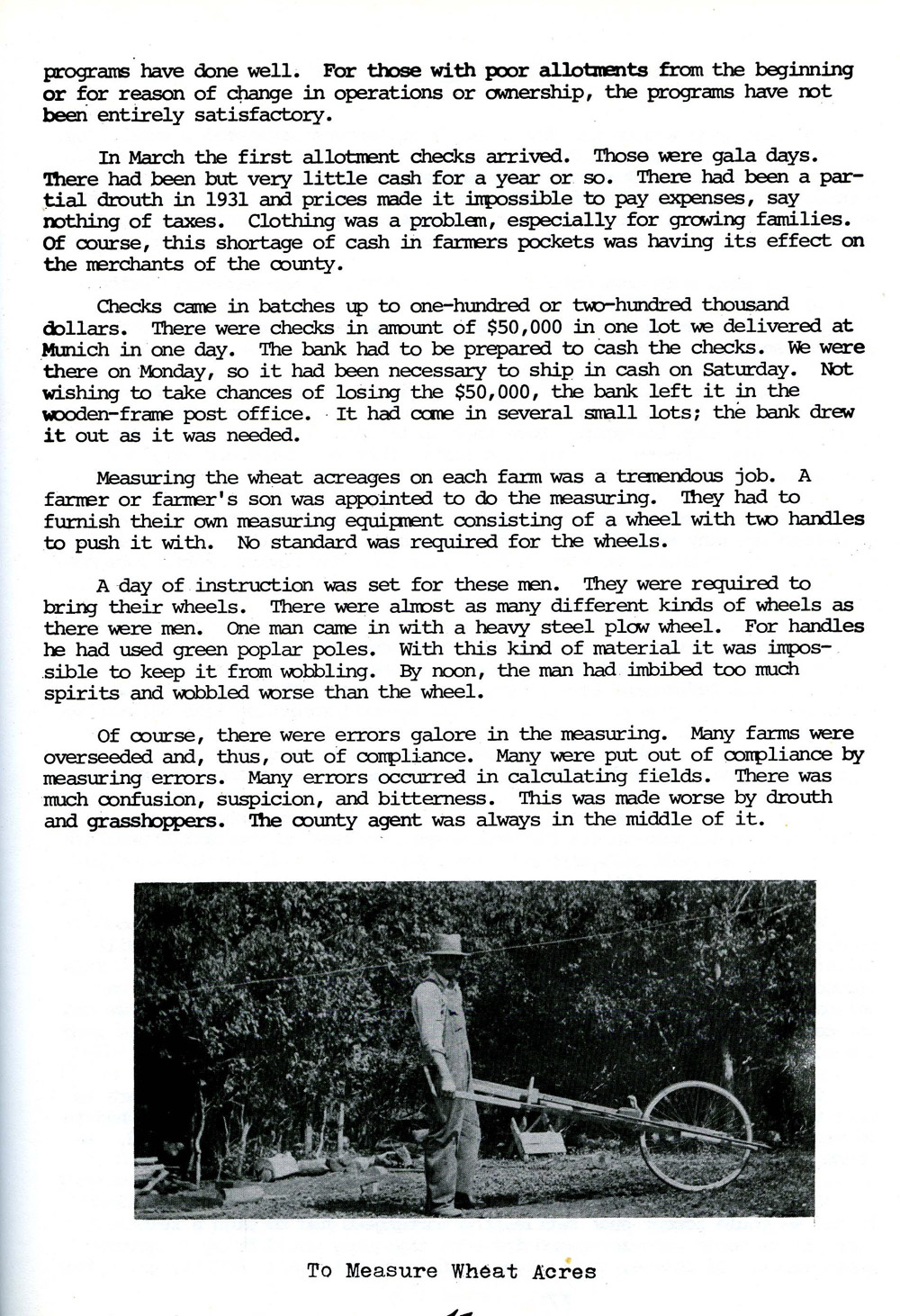 Extension agents explained the program to farmers and helped them fill out the forms and the contracts. (See Document 1.) They also checked each farm during the growing season to be sure the farmers had met the requirements of the AAA. In addition, farmers in each county formed a Wheat Production Control Board. The board supervised the administration of the AAA programs in each county.

North Dakota had a very good participation rate. More than 93 per cent of North Dakota farmers signed up for the AAA program. Most complied with the requirements of the program. However, farmers had few options in the depths of the Great Depression. The AAA check helped them hold onto their farms.

Others, however, saw the program as “a good thing.”  One farmer said, “They said you could do this and couldn’t do that. I just went along with it the way it came.”  Few farmers understood the economic principles of the AAA, and those farmers recognized that the effort was too small to be effective.  However, they were happy to have some help. They were still eligible to participate in other New Deal programs, too, such as the Works Progress Administration.

In 1936, the AAA was declared unconstitutional by the U. S. Supreme Court. Roosevelt presented a different version of the program to Congress. It was passed and went into effect immediately. The second bill had more emphasis on soil conservation and improving soil quality, but had other qualifications similar to the first bill. The AAA did not end the farm crisis of the 1930s. It was an important program in North Dakota, but too many farmers in other parts of the nation did not participate. The crisis finally ended with the strong economy of World War II.

Why is this important? The AAA established a new relationship between farmers and the federal government that has continued to the present. The fact that the AAA was so well accepted in North Dakota demonstrates how desperate farmers were during the Great Depression.