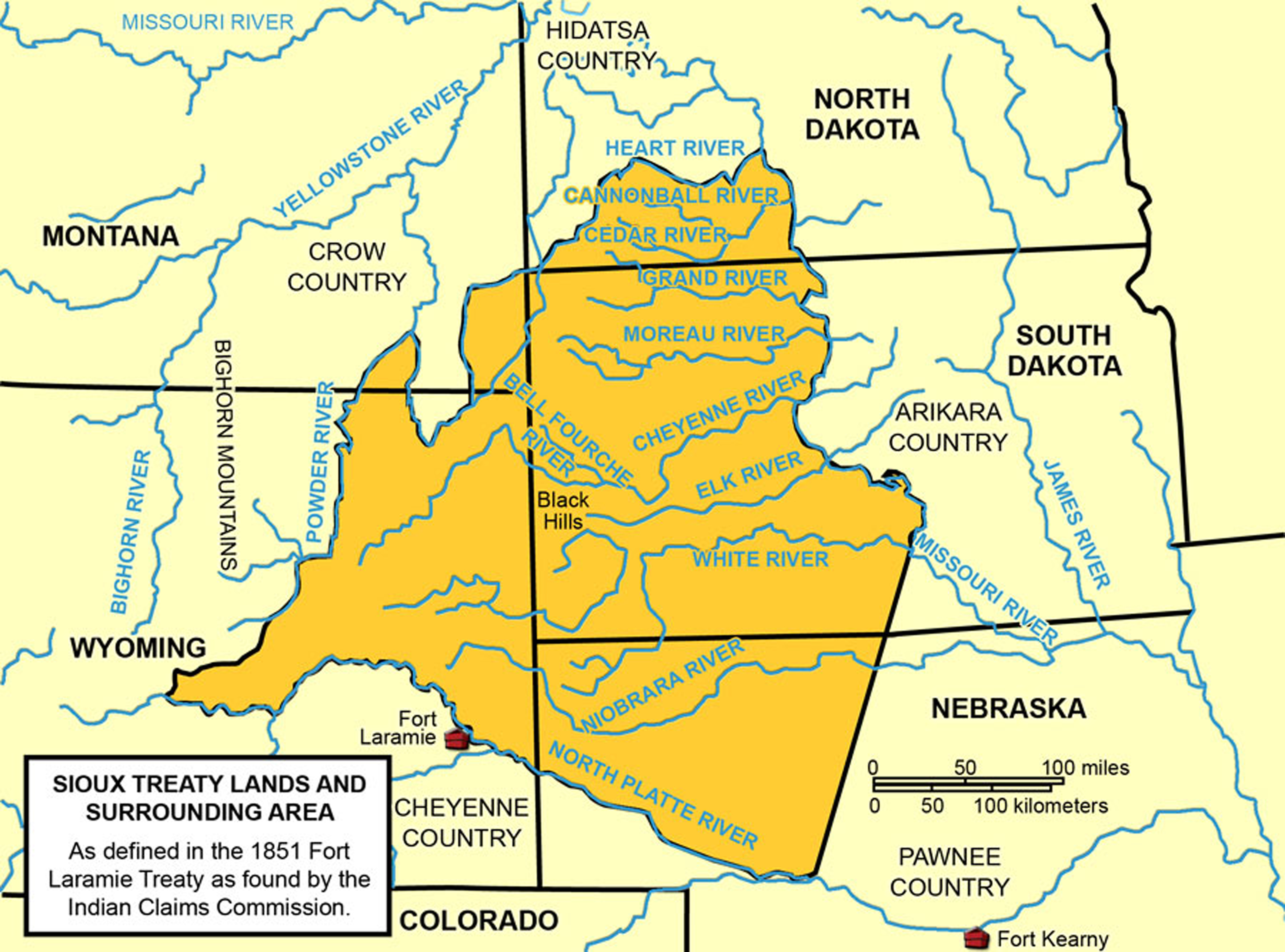 Map 1: Fort Laramie Treaty of 1851. This treaty was the first effort to define the territory of the Great Sioux Nation of Lakotas, Dakotas, and Nakotas. The treaty council was attended by thousands of Sioux men and their families as well as soldiers and officers of the U.S. Army, representatives of the United States government, and interpreters. Note that the tribes that surrounded the Sioux Treaty Lands did not yet have defined territories. The Treaty of 1851 did not establish a reservation, but began the process of defining territory in which the Sioux could live and hunt. The treaty was supposed to reduce warfare among the Indian tribes of the northern Great Plains.

The United States had to deal with Indian tribes through treaties. Treaties are written documents that outline the specific nature of the relationship between nations. Treaties are used to define alliances and to end wars. The treaties between the United States and Indian tribes generally defined the geographical territory the tribes could inhabit, land cessions (land the tribes gave up their claims to), and payments the government made for land cessions. Tribes made some demands for payment in dollars or goods and for schools or agencies. However, the tribes were often weak or impoverished when they signed the treaties, so they had little power to make demands.

In 1851, one of the most important treaties was signed at Fort Laramie in present-day Wyoming. The treaty council was attended by thousands of Indians from several different tribes. The Treaty of Fort Laramie of 1851 defined boundaries between Indian tribes of the northern Great Plains. (See Map 1.) The tribes that signed the treaty in 1851 agreed to

The United States had to

The Treaty of 1851 had several problems. There were not enough interpreters to be sure that every tribe had a full understanding of the treaty which was written in English. Another problem was that the government was accustomed to making decisions through elected representatives. Western Indian tribes made decisions when all of the people agreed (consensus). These two traditions clashed. The tribes agreed to appoint chiefs who signed the document, but they could not control the people who were not part of the decisions. A more important problem was that the terms of the treaty were broken by U. S. citizens, the government, and the tribes.

Over the next several years, the treaty faced new challenges. The Civil War had ended. The Union Pacific Railroad was under construction. Gold had been found in Montana and Colorado. There were many more people traveling west through the Great Plains. The increase in travel led to increase in conflict. Some of the conflict was centered on the Bozeman Trail in Wyoming that ran right through Sioux treaty lands toward the gold fields of Montana. Red Cloud, an Oglala Lakota, declared that he would continue to make war on travelers and Army posts until the government closed the road and removed the Army.

The Army also established military posts in Sioux treaty lands. Fort Rice and Fort Buford on the Upper Missouri River were on or near treaty lands. Sitting Bull, Gall, and other Hunkpapas continually harassed these posts and demanded that the posts be removed.

Map 2: Fort Laramie Treaty of 1868. The U. S. government sent agents to discuss a new treaty with the Great Sioux Nation in 1868.  The treaty created the Great Sioux Reservation (in gray).  Unceded lands (in yellow) in Wyoming, Nebraska and Dakota Territory were reserved for hunting.  A portion of the unceded lands in northern Dakota Territory became part of the Great Sioux Reservation (later Standing Rock Reservation) following an agreement between the federal government and the Sioux leaders in September 1876. Forts bordered the eastern edge of Sioux treaty lands. However, the Sioux had focused attacks on Fort Phil Kearney in central Wyoming, forcing the government to abandon the post under the terms of this treaty.

In 1868, a treaty commission again met at Fort Laramie. The U. S. agents at the council came with a new federal policy that focused on placing all tribes on reservations. The Treaty of Fort Laramie of 1868 established the Great Sioux Reservation which included the sacred Black Hills. (See Map 2)  Annuities (payments) of food and clothing were to be delivered to Indians living on the reservation. The government promised to close the Bozeman trail and the forts along the trail. According to the agreement, the treaty had to be signed by three-fourths (3/4 or .75 percent) of the males of the tribes. Many bands of Lakota Sioux agreed to the treaty. Some of them were already living within the boundaries of the Great Sioux Reservation. Others, such as Two Bears and his band, lived nearby and cooperated with the agents, though they did not move onto the reservation.

Six years later, in 1874, gold was found in the Black Hills. Though the government offered to buy the land, the Sioux tribes refused the offer. The Black Hills were sacred to the Sioux and they would not sell. The Army did not prevent gold miners from entering the Black Hills. The federal government then demanded that all the Sioux report to the reservation. Sitting Bull and his band refused. More conflict followed. Treaties which were meant to bring peace led directly to more conflict.

Why is this important? The Treaty of Fort Laramie of 1851 created a short period of peace which allowed more settlers to enter or travel legally through tribal lands. However, as more non-Indians traveled through Sioux treaty lands, there were more opportunities for conflict and misunderstanding. The conflicts led members of Congress to think that another treaty was necessary.

The treaties created a new problem for the Sioux. Once the government had established specific territorial boundaries for the tribes, federal agents could negotiate for more land cessions. The Sioux came to the 1868 treaty council with a great deal of power because Red Cloud and Sitting Bull had fought settlers, miners, and the Army. However, the Sioux lost land in this treaty council, and over the next forty years would continue to lose land originally promised to them by the Treaty of 1851.