Section 4: Why They Came

The move to America was a difficult decision for Europeans. Many left family and friends behind. Sometimes parents left their children. A sick child might be turned away at the U.S. immigration centers leaving the family to make a dreadful decision: to go ahead into the new country without the child or to turn around and go back to their homeland.

Historians talk about push-pull factors when they try to determine why people emigrated. The push factors tell us what was happening in the home country that made people feel that they had to make the voyage to the United States. Pull factors tell us why they came to the U.S., and specifically to North Dakota.If we examine push-pull factors we understand that the reasons for emigration are not the same for each nationality, culture, or family.

The short excerpts below are taken from interviews conducted with foreign-born residents of North Dakota. They were interviewed in 1939 and 1940 as part of the federal Writers’ Project Ethnic Group studies. These excerpts constitute a very small sample of the interviews, but they suggest the great variety of reasons and experiences for emigration.

Gottlieb Breitling, Ashley. Born 1864, South Russia. “My reason for leaving for this country may be somewhat different than many others. In the first place I did not like to work on the farms as you had to do everything by hand. We were told that in America they had machinery with which even a little boy could farm without any trouble. Another reason was my father had no land to give me and in them days if you didn’t have land you was lost. I could of course do some blacksmith work, but that wasn’t enough to make a living on as each farmer could fix his own things. I got to hearing so much about America and that you could get land by merely sitting on it. I couldn’t pass up such a chance. I thought and wanted to make something for myself. I had heard from many that had relations over here that said they were making very good. My intentions were to go over here and work for others until I earned enough to make a start for myself but if I had realized at that time what a person had to go through I never would have went over here but then again now I am glad.” (See Image 7.) 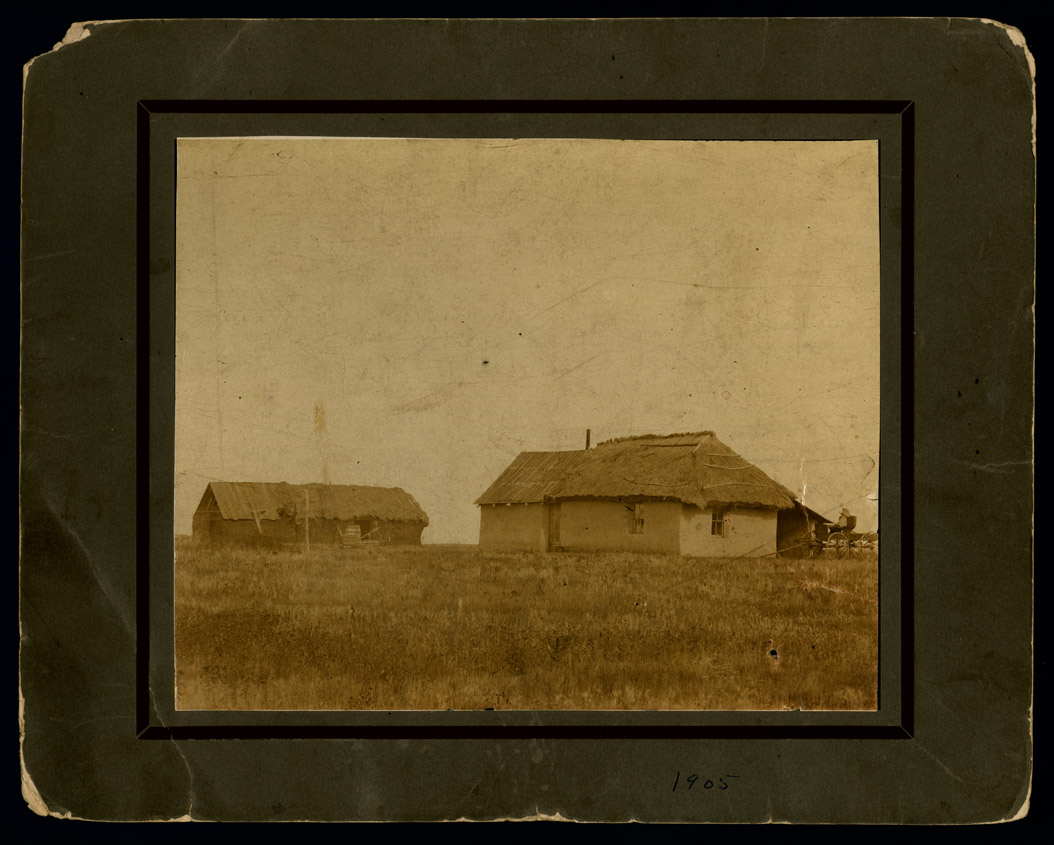 Image 7: Germans from Russia sometimes built houses in a style called rammed earth. Rather than forming clay/straw bricks and drying them in the sun, this style called for packing dirt into a frame to make the walls. The walls were strong, long-lasting, and kept the family warm in winter and cool in summer. SHSND E0172

Jacob Bertsch, Ashley. Born 1868 in Johannestal,  South Russia. “We had several reasons for leaving the Old Country. One reason was that my father disliked the form of government and compulsory training of young men [for military service.]   When boys were most needed [on] the farm, that they were compelled to leave for army training. The other reason was that Father owned a hundred acres and could make no progress in buying more land. When his boys would be ready to start farming for themselves and it came to dividing the land, the shares would be too small to make a living farming. We heard from people in America that land was cheap in that country, and that if a homestead was taken, you could make enough money to buy more land. We decided to go, and held an auction on our cattle, horses, land, home, and furniture. We even sold some of our clothes. A good price was gotten for everything. I remember that we had a pony I was very fond of and could hardly bear to see it sold, but sold it was.”

Christ Breitmayer, Ashley. Born 1866 in South Russia. “My reason for going to this country were some-what different I imagine than most people that went over here. You see I did common labor in the old country and owned no land. Well I had an uncle in Scotland, South Dakota that wrote me to come over here as I would like it here and that I wouldn’t have to work so hard over here. He also wrote that I could get land here for nothing. So I figured up one night how much money I had saved and found out how much it would cost me to go over here. I figured if I didn’t like it I would again go back after I had earned enough here to get back on.”

Christian Diede, Lehr. Born 1869, Johannestal, South Russia. “The reason we came to this country was to obtain land as the farm land here [in South Russia] was hard to get and cost too much to rent. We had heard stories about America from our friends who had left Russia and settled there. They told us that the crops were good and that we would be able to get land for nothing and be rich in a short time. And when we went to America we expected to find lots of available land and great prices as well as good crops.”

John Harter, Sr., Ashley. Born 1862, Beresina, South Russia. “Our main reason for coming to America was to obtain land. We had heard that we could get three quarters of land for nothing. We had heard that it was very good land and that good crops were raised every year. We had friends who had came to this country and we had received several letters from them telling us that it was possible to get two or three claims of good land and [we] would be rich after a short time. I expected to find these stories to be true and expected to find the people living in villages like they did in Russia and not spread all over the country.”

Nora Cosgriff Page, Williston. Born 1862, County Galloway, Ireland. “My brother came over here first, and then he paid my way over. Five of my half-brothers and sisters were already here and my other half-sister was married in Ireland, so she and her husband came over with me.”

W. Smith, Cando. Born 1856, County Down, Ireland. “The reason I came to America was to enjoy the freedom of the New Country. And too we heard that we would be able to make a home here in America at a small expense. I worked for a short time in the Old Country in order to obtain enough money to pay our fare to America.”

Dave Aronson, Fargo. Born 1852 in Turagen, Russia (today this city is in Lithuania). “I did not like to stay there [in Lithuania] very well because I could not make so much money peddling. I had heard about America where there was much money; and I often wished I could go there. But it did not seem I could get enough money ahead to make that long trip. But I was young and restless; and I wanted to see more of the world: so I finally decided I would make the start by going to Sweden where I thought I could make as good a living as I was making in Lithuania with my pack of goods. . . . But I did not do very well with my peddling in Sweden; and I was finally compelled to take any kind of work I could find to do. It was not a good living; and I did not like it there very well. So I decided to try to get to America where I thought it would be easier to get ahead; and where I would at least find many of my own race.” (Mr. Aronson was Jewish and wanted to live near other Jews.)

Andrew Hellerud, Reeder. Born 1870, Kongsvinger, Norway. “The reason I came to this country was because I wanted to become wealthy and return to the Old Country. I did not leave Norway because of political or religious reasons, but more on account of economical reasons. I expected to find America a rich and prosperous country and a good place to make a home.”

Ole Morgado Olson, Hettinger. Born 1892, Trondheim, Norway. “The reason I came to this country was because I had heard tales of golden opportunities to become wealthy without having to work as a laborer. And I had heard that gold was scattered around so thickly that people grew careless at picking it up. So I decided to come over and I was seventeen years old when I came to this decision. I of course expected these stories to be true and I was very eager to get started. My brother sent me the necessary money to come here and I of course intended to work it out on his farm. I brought only my clothing and fifty dollars in cash with me as we were required to have fifty dollars before we were allowed to land. I also had a little change other than the fifty dollars.”

Helmine Skogen Kvanvig, Hettinger. Born 1891, Stavanger, Norway. “The reason we came to America was to get enough land so, that our children would get a large portion as their share when we died. We heard many stories of the wealth and opportunities that could be had here in America. We expected to find more work but with better pay and also better living conditions for a large family. The small country was getting crowded and obtaining even a small farm was getting to be almost impossible. The thought of owning as much as 160 acres of land made us feel that we would be rich and would be able to keep many more cows than we had been able to take care of in Norway. We also had some relatives who had came to America some time before we had decided to leave the Old Country and of course we had heard from them describing the wonderful country as well as the many opportunities.”

Ole Aaker, Minnewaukan. Born 1869 (?), Hallingdal, Norway. “My ambition was to continue school [in Norway] but I had no means of financing this ambition and I could see no future for myself if I remained in Norway. One of our former neighbors, Ole Rodnung, who had immigrated to America and had taken up land near St. Petersburg, in Minnesota, sent a ticket to his brother and one to me. I was nineteen years old at that time and was the first of our family to come to America.”

Tobias Thime, Cooperstown. Born1855, Stavanger, Norway. “I came to America because I heard it was easier to get along in that country, and I would be able to make a better living. Wages were low in Norway, and when talking to people that were in the New World, they said gold could soon be made in a few months time. Betuel Herigstad, an agent for a steamship company, had worked around Chicago for three years, came home, and got many of us from Thime to buy tickets from him from Stavanger to St. Paul, Minnesota. All I expected of America was to be able to find a place to locate, obtain some free land, and save enough money for my old age.”

Asle Engebretson, Hillsboro. Born 1857, Numedal, Norway. “A brother had migrated to America and had settled in Iowa. We kept in constant touch with him, and his letters were full of praises for this country. He said that opportunities were everywhere, so we decided that we couldn’t do worse there than in Norway. We expected to find a new home, work, and free land in the new county, and a better chance to make a good living on a farm.”