In 1910, more than 1,900 women in North Dakota listed their occupation as farm laborer. Probably most of these women (or girls) worked in farm houses helping to care for children, fix meals, and do the back-breaking work of laundry. What the numbers don’t show us is that many women, married to farmers, also worked on the farm. They helped plow the fields and bring in the harvest. They raised chickens and cows; they sold eggs and butter to neighbors or at a nearby store. Their work brought in a weekly income while wheat was sold only once a year. Their crops of butter and eggs were more reliable than wheat crops. Farm families depended on butter and egg income for their everyday needs.

Sometimes, people were surprised to see women working in the fields. It was not a common sight in most of the United States. But Nina Farley Wishek, who lived in McIntosh County, came to see women’s field work through different eyes:

I became accustomed to women working in the fields and even came to realize that the girls and women enjoyed the freedom of outdoor life. Many girls preferred working outside.

Source: Along the Trails of Yesterday 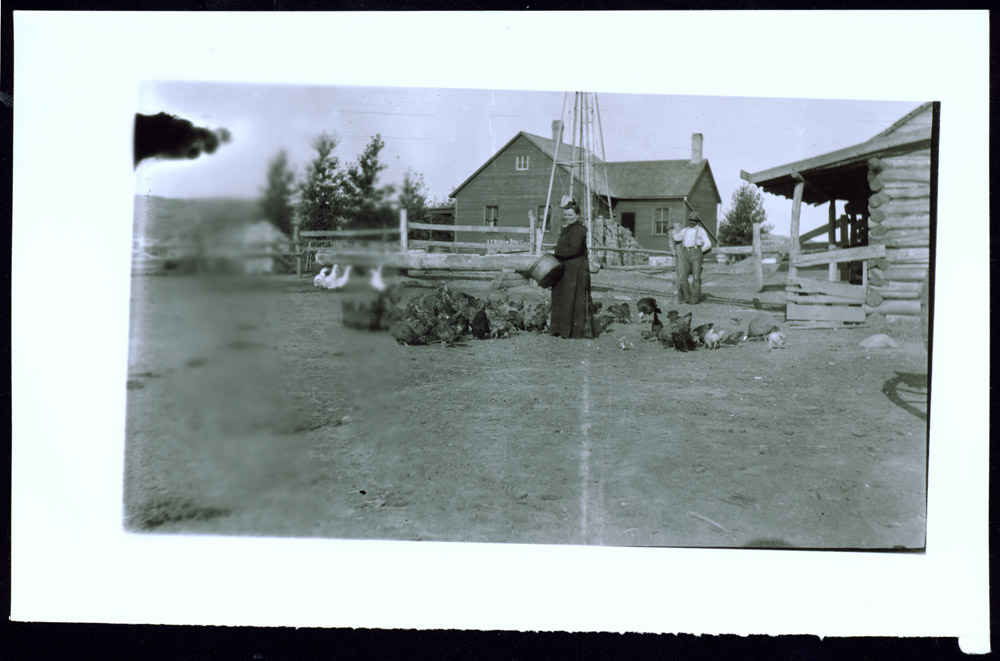 Image 25: The care of chickens and the sale of eggs was usually women’s responsibility on a farm. The income from poultry and dairy products was important in feeding and clothing farm families. SHSND 1952-3907-2.

In addition to working in the fields and raising barnyard crops, women also were farmers or farm managers. Some single women claimed homesteads in their own name and hired someone to plow and harvest. Married women sometimes managed the farm because their husbands were doing other work. Some women took over farm operations after their husbands died. (See Image 25.)

Rosina Riedlinger, a German-Russian immigrant farm woman, tells us that women’s work was economically important on farms. She explained:

The best way to farm is to let the men seed the grains and the women have about 200 chickens, 100 turkeys and a few cattle. We had chickens and during the summer they supplied us with groceries, and during the winter the turkeys paid for fuel and clothes for the family. Cows and cream paid for the repairs and spending money we needed and the grain crop was money that could be laid aside, or invested in more land.

Too often, important agricultural leaders such as bankers, the state Agricultural Commissioner, and agricultural scientists at North Dakota Agricultural College forgot how much women contributed to the success of farming. One farm woman (we don’t know her name) wrote that:

There is no place where women work so hard and receive so little recognition as on the farm . . . . If the women entirely support the family with eggs and butter and cheese, it’s all credited to the man.

No matter what other people thought, farmers never forgot how important women’s work was to the success of farms. They knew that women and men working together could build a farm and home that provided their families with everything they needed.

Why is this important? The partnership of farm couples meant that farms succeeded even in years when frost or grasshoppers harmed the field crops. Women usually worked with the men in the fields when necessary. They also earned money from the sale of barnyard crops such as eggs. The common effort of women and men working together helped farm families survive the bad crop years and allowed North Dakota to grow as a state.

On most North Dakota farms, women worked side by side with their husbands to make their homes and farms a good place to live and work. However, some women individually chose farming as a way to make a living and surprised many people with their success. One of these women was Johanna Randolph Kelley.

Johanna Randolph was born in Emporia, Kansas in 1870. In 1897, she married Clark W. Kelley, a banker and merchant in Devils Lake. Mr. Kelley owned a farm, but had not done much to improve it. Johanna thought she could make the farm a profitable venture. Mrs. Kelley also wanted the farm to be a place that was beautiful for her family and visitors.

The farm was a few miles southeast of Devils Lake. It was located on a road that had a bad gumbo (mucky mud) patch that gave farmers much trouble when they traveled that road in the spring. Mrs. Kelley moved the road away from the gumbo patch and planted trees along the edge of the road. Then she planted a garden in the gumbo patch with many trees and shrubs alongside the garden. The moisture that collected in the gumbo patch helped her plants grow.

She raised flax, wheat, barley, Great Northern beans, and several varieties of corn, including “squaw corn,” which was the common name for a variety of corn adapted from the corn types of the Mandan Indians. Her crops won prizes at the county fair and the state fair.

Johanna Kelley also raised livestock. She had white Yorkshire hogs which were very well-known in the area. Her first sow, named Mary Ann, had won a blue ribbon at the state fair. Three years after Mrs. Kelley bought Mary Ann, the sow’s piglets sold for a total of $600. She raised white Orpington chickens in a henhouse large enough to accommodate 500 chicks. She also raised white Peking ducks, white domestic turkeys, white guineas, white pheasants, and white peacocks. For companionship, she had white collie dogs. All of her livestock followed the white theme. For obvious reasons, she called her farm, “White Farm.”

Once her gardens and small livestock were established, Mrs. Kelley began to raise white shorthorn cattle. So impressive were her efforts to find or develop the proper livestock for the northern climate, that James J. Hill presented her a fine, pure-bred white shorthorn bull.

Mrs. Kelley was actively engaged in the politics of farming. She was a member or an officer of at least 10 farm organizations. She was president of the Farm Women’s Congress of America in 1913, and helped to organize the Association of Women Farm Managers. Many women and men from all over the United States wrote to her for advice on farming.

When Clark Kelley became ill, the Kelleys left Devils Lake and moved to Florida where they thought his health might improve. After Mr. Kelley died, Johanna married George Hollister.

Why is this important? Although women were not expected to have careers in the 19th century, many women chose to do what interested them anyway. Johanna Kelley chose farming. She was very successful and made sure that her name appeared in print in national publications, but she was not unusual as a woman farm manager. In 1900, the U.S. Census reported that 6.4% of working women were farmers or farm managers. That was the 6th most common occupation for women.

Other North Dakota women also managed farms. Many of them were widows who inherited their farms when their husbands died. Unmarried women also managed farms on their own homestead claims. After the women “proved up,” they could sell the farm. If a young woman landowner married a farmer, the couple often kept both pieces of land to make a larger farm.