Many factors controlled the wheat yield, or the number of bushels harvested per acre of wheat seed sown. Rainfall, early frost, disease, and grasshoppers contributed to a good, or a poor, harvest. Soil quality, too, was important. Each crop of wheat took minerals and other nutrients from the soil. 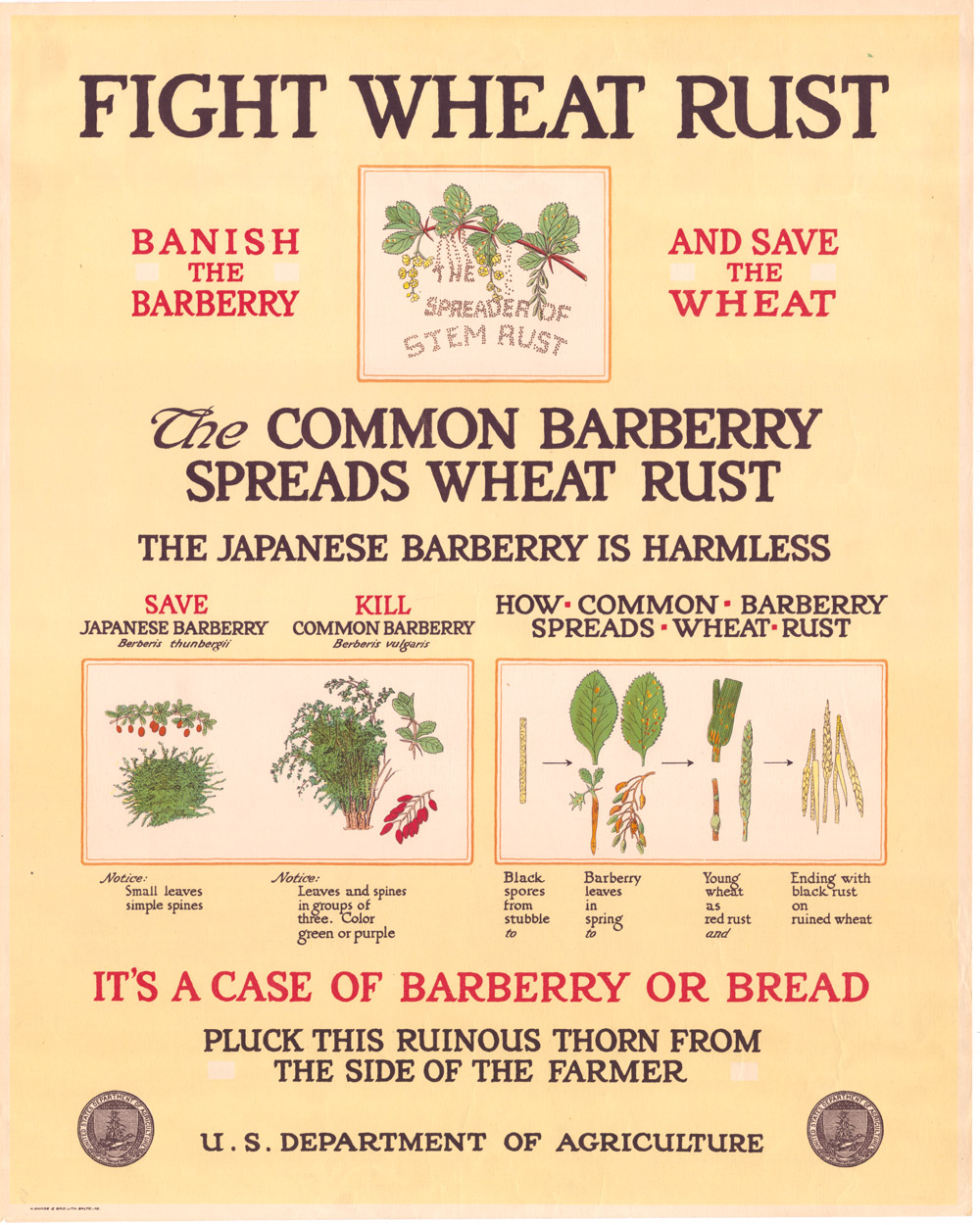 Image 4:  Berberis vulgaris, or common barberry, was widely planted as a landscape shrub. It carried, or harbored, the fungus that caused wheat stem rust. In the 1920s federal and state agricultural officials began a program to eliminate common barberry from farm and city gardens in an attempt to protect the wheat crop from disease. This poster was part of the campaign. SHSND 30652. 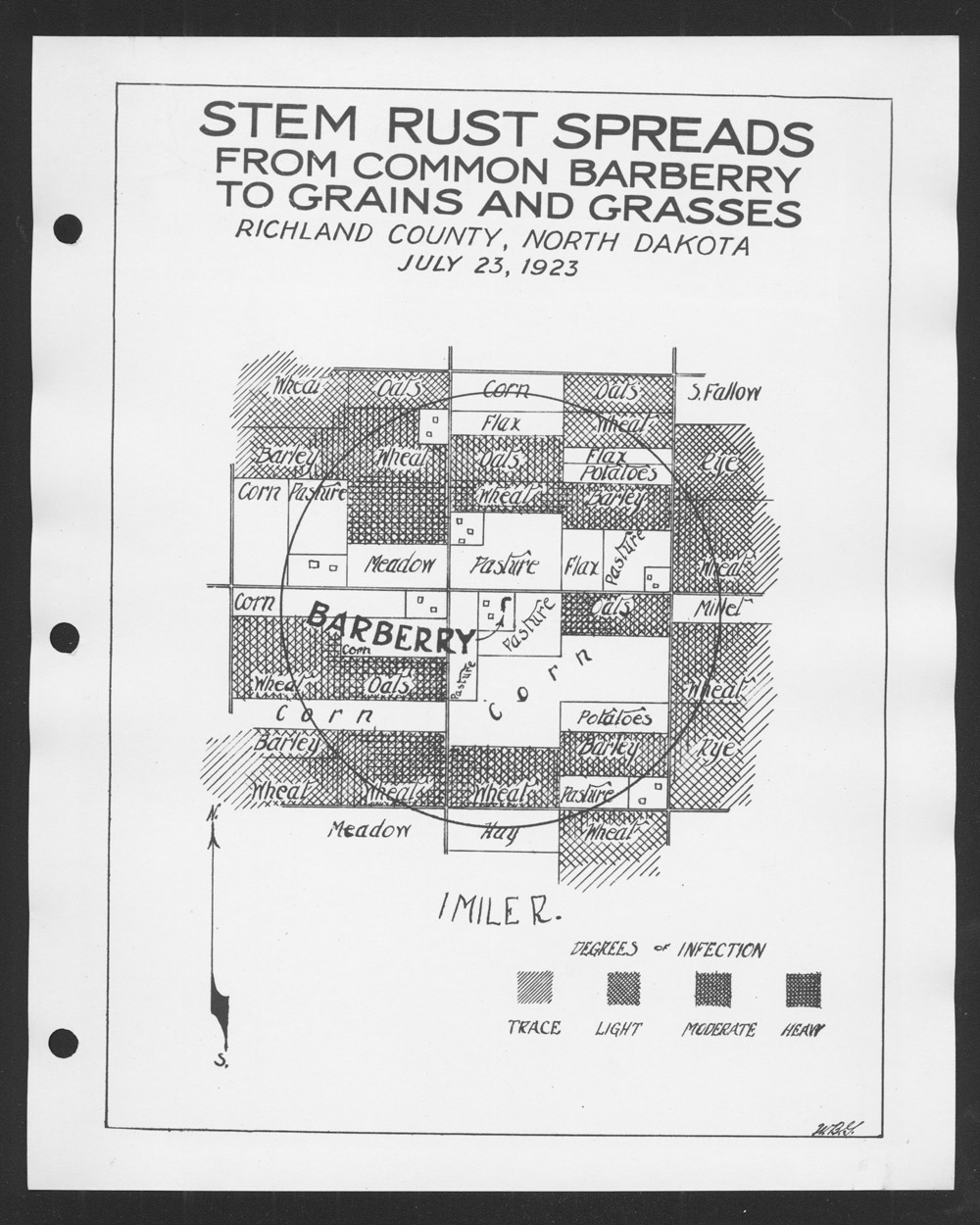 Image 5: Stem Rust from barberry plants spread into grain fields surrounding this farmstead. The shrub row of barberry is shown by the dark line in the farm yard. The two small squares are houses or barns. SHSND 30652. 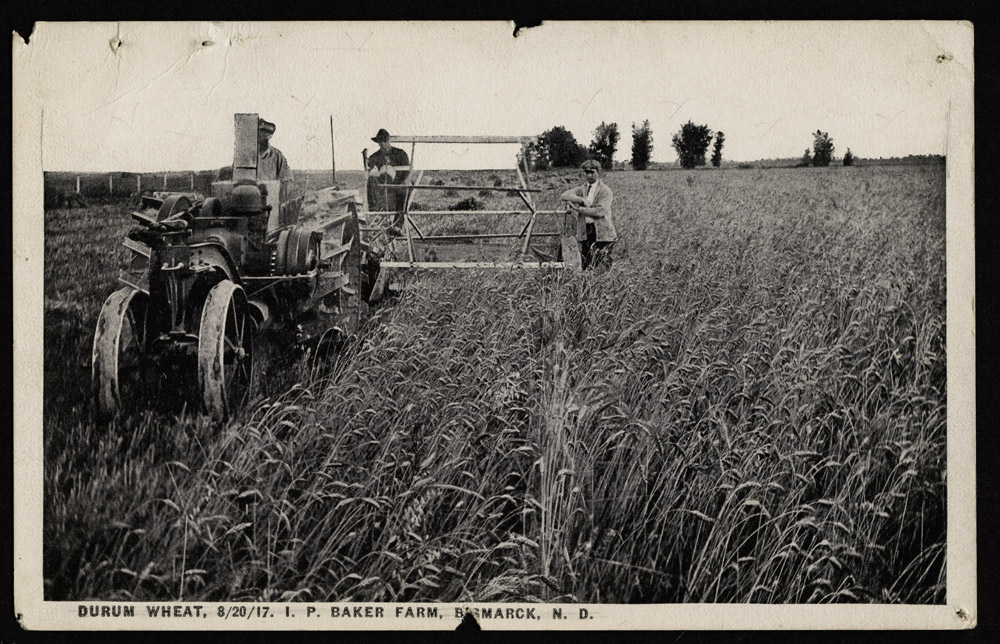 Image 6: In 1917, Isaac Baker used a tractor to pull the reaper/binder through his durum wheat fields near Bismarck. Note the bundles lying on the ground behind the binder. SHSND 0055-32.

Wheat was an easy crop to sow and harvest. Many farmers planted wheat year after year. As a result, productivity dropped. Early farmers talked about the wonderful crops they got on “breaking.”  As soon as the soil was turned over, they dropped seed into the broken sod by hand. The fertility of the previously undisturbed soil brought in crops of 20 bushels to the acre. But over time, the soil lost fertility (its ability to nourish plants.)  It was not a steady decline; weather and other factors still had a major role in harvest yields. However, in 1920, when wheat prices dropped following the end of World War I, yields were only 7.9 bushels per acre. It was the beginning of the Great Depression in North Dakota.

Another serious problem that limited production of Hard Red Spring (HRS) was stem rust, a fatal fungal infection of HRS wheat. By 1900, stem rust was showing up in wheat fields. In 1904, the HRS wheat crop was a total failure due to rust. (See Image 4.) Rust appeared again in 1914. (See Image 5.) Farmers looked for a substitute for HRS wheat. Durum, the hardest of wheats and naturally resistant to rust, was the answer.

Durum is the wheat that is used to make pasta. (See Image 6.) Most Americans did not like bread made from durum wheat. It made heavy, dense bread, and the flour had a yellowish tint. Durum was popular in Europe for making pasta (it was called macaroni flour then). There was, however, almost no market in the U. S. for durum. Americans did not eat much pasta because in the U. S., pasta was made from winter wheat. It cooked up into a gummy mass. North Dakota’s farmers raised durum, but for many years it was used as livestock feed, rather than milled into flour. It took a couple of decades for Americans to learn to enjoy pasta made from the yellowish flour of durum wheat. The United States Department of Agriculture (USDA) educated Americans in the use and taste of pasta. Today, most of the worlds’ pasta is made from wheat grown in northwestern North Dakota. (See Map 4.) 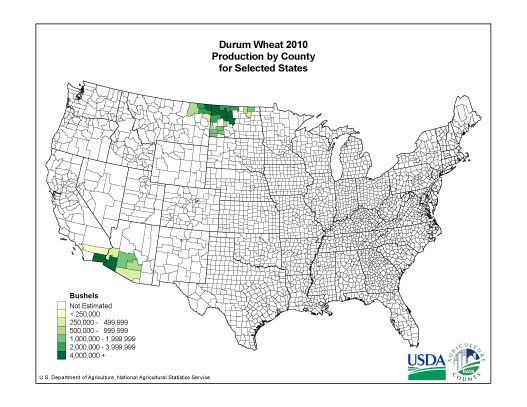 Why is this important? The cultivation of wheat was the basis of North Dakota’s economy for more than 100 years. North Dakota, particularly the Red River Valley, became known as the Bread Basket of the World because of wheat production. A healthy wheat crop, harvested when crop prices were high, helped North Dakota prosper.

For decades, loss of soil fertility, disease, and insects damaged the wheat crop and caused loss of income for farmers. When wheat failed, the state lost its economic strength. Durum production helped farmers avoid a total loss of crop to disease. In addition, farmers learned to use methods for retaining soil fertility. Farmers also turned to new varieties of rust-resistant HRS wheat. Because of these advances, North Dakota remains an important producer of wheat.

However, today the old enemy, wheat stem rust, is returning to farm fields in Europe and Africa. Stay tuned as research scientists at North Dakota State University and other agricultural research stations once again seek a new variety or treatment of wheat to secure a harvest that will feed the world.