Farmers began to look at the land in Dakota Territory during the Civil War (1861 – 1865). In the 1870s, people who wanted a family farm could claim a homestead of 160 acres. They could also purchase land in any amount they could afford. Family farms, much smaller than bonanza farms, had an average of 277 acres in 1890. Federal law also allowed a farmer to claim an extra 160 acres by planting trees on part of the land. Farmers took advantage of all these opportunities, and by 1920 the average farm had grown to 466 acres.

Image 16: This unidentified family proudly poses in their nice buggy in wheat field. The boy sits on the horse nearby. This photo might have been shared with friends who would see a prosperous farm with large barns, a comfortable house, and a healthy crop of wheat. SHSND 10120-285 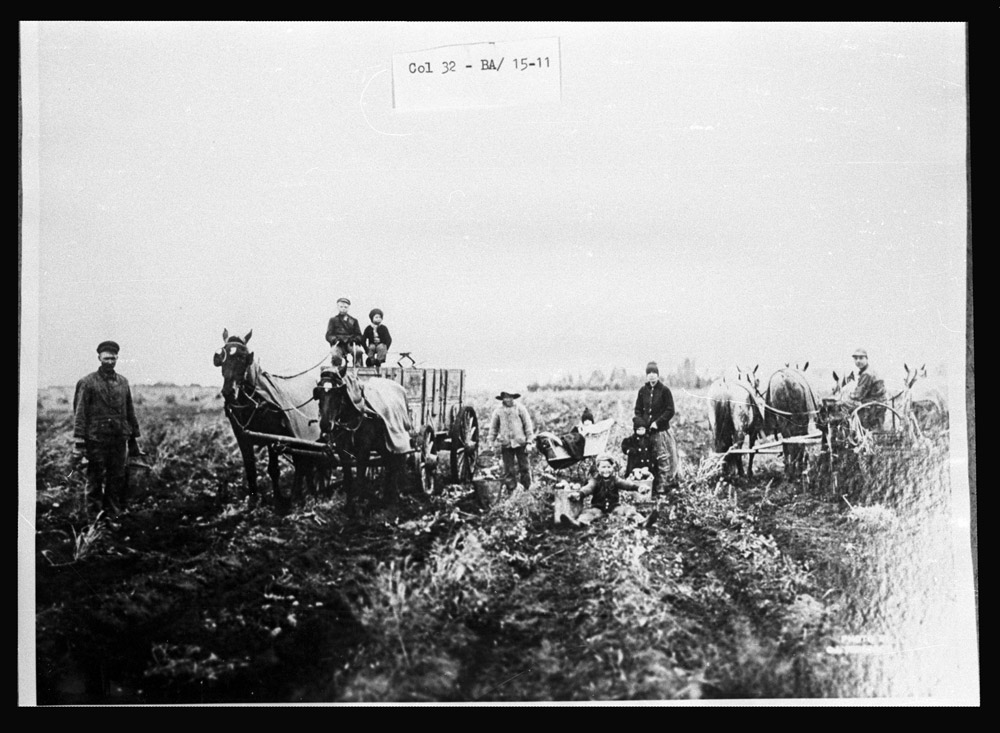 Image 17: On family farms, everyone helped with harvest. Christ Hanson’s children drove the wago to help with the potato harvest. Even the baby was in the field in a buggy. The other adults may be relatives or hired workers. SHSND 0032-BA-15-11. 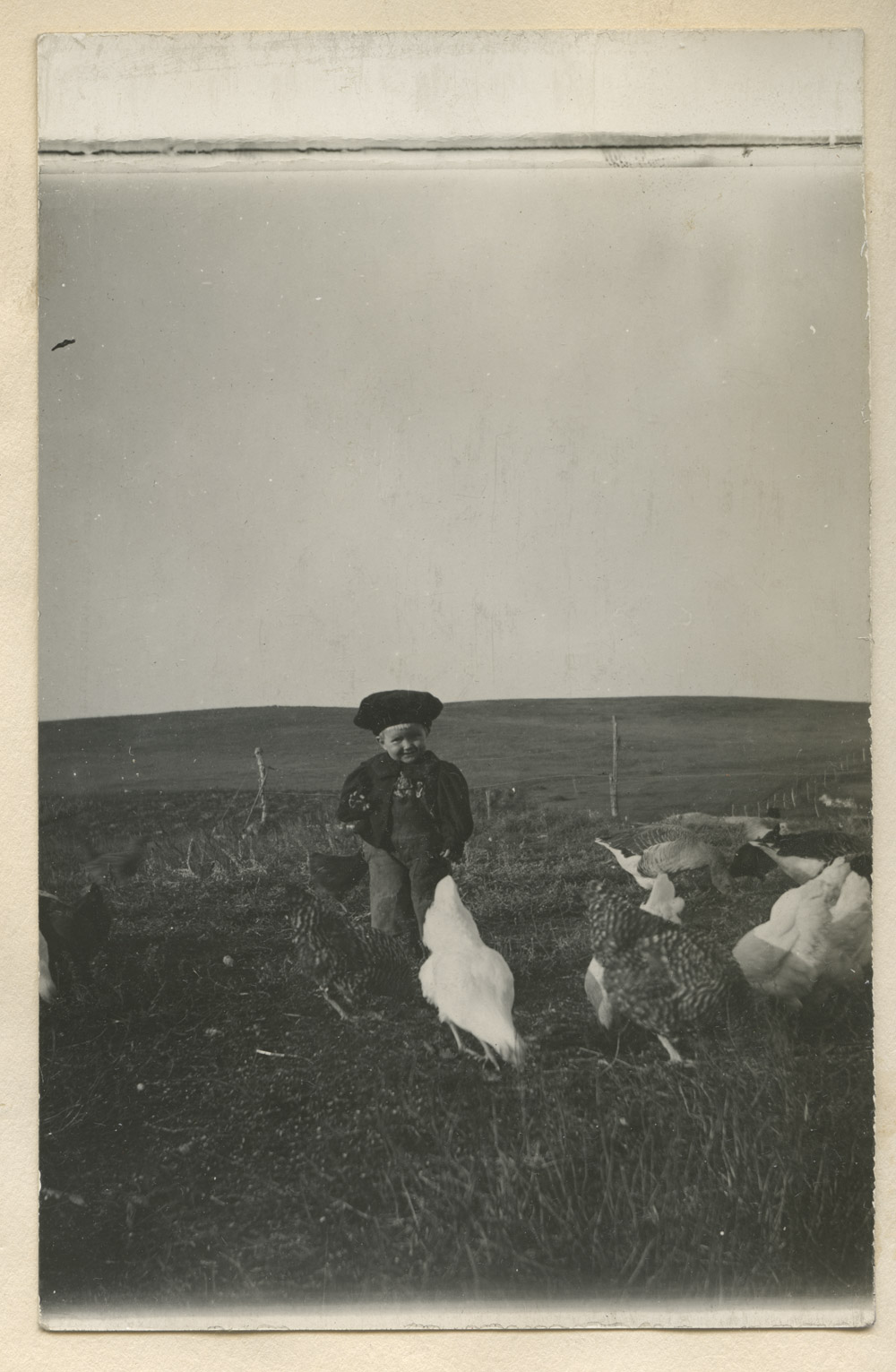 Image 18: Children as young as 4 or 5 fed chickens and collected eggs. Their work helped make the farm productive and profitable. SHSND 0955-album p 094-02.

Small farmers usually arrived in Dakota Territory by train. Some got off the train and walked to their new land. Others rode in wagons to locate their land claim. If they arrived early in the spring, they plowed a field right away. Part of the field was usually planted to potatoes for the family’s food supply. The rest of the land was planted to wheat or flax. Farmers were surprised and happy with the good crops they got from the first plowing which was also called breaking.

A homestead claim cost the farmer $14.00. That was the filing fee at the U.S. Land Office where the claim was registered. Because the registration fee was so low, many people talked about going to Dakota for “free” land. But there were other costs. Every homesteader had to build a house, dig a well, and feed the family. If they didn’t have a horse, an ox, or a milk cow, they had to borrow livestock to pull the plow until they could afford to buy a horse. A good plow horse might cost $75 in the 1880s. They also had to buy seed. One historian has estimated that the actual cost of homesteading was about $1,000 ($23,400 today). (See Image 16.) That amount covered the costs of transportation, seed for the garden and fields, livestock, and living expenses until the crops were harvested.

Dakota has been called a “farmers’ frontier.”  That means that farmers came to Dakota to claim or buy land and brought their families with them. Children, especially boys, were important as workers on the farm. (See Image 17.) Boys twelve years of age often walked behind the plow or guided the horse or ox pulling the plow. Younger children and girls fed chickens and collected eggs. (See Image 18.) Children as young as five years old were in charge of younger children when both the mother and father worked in the fields. Everyone in the family had a job on a homestead farm.

Farming in Dakota was difficult in the early years (1870 – 1920). Prices for wheat were low, sometimes only 40 cents per bushel. There were many threats to the wheat crop including grasshoppers, rust, hail, and frost. In addition, the fertility of the soil (the nutrients that helped the wheat grow) diminished with each passing year. Family farmers could not afford to put a portion of their land into alternative crops or let it rest for a year to re-gain the nutrients. In 1890, the year after North Dakota became a state, many farm families had to look to their churches, neighbors, and the state for help because the crops had been damaged by drought.

Why is this important? With so many people living and working on farms and ranches, agriculture became the backbone of North Dakota’s economy and population at statehood in 1889. All of these farm families had to have a way to send their crops to market, so railroads built lines across the state and into small towns. Farm communities built schools and churches. Small towns grew up along the railroad lines where farmers could buy things they needed and have a place to sell their crops. Farmers took an interest in politics. Many farmers served in the state legislature and in county and township government. Slowly, but steadily, with the hard work of farm families, North Dakota grew into a state with a strong economy and close-knit communities.

Oliver Dalrymple and other bonanza farmers purchased the newest equipment as soon as it was available. Small farmers had to manage equipment differently. When breaking a homestead field, farmers often borrowed equipment or livestock, if they had neighbors to borrow from. Oxen worked best for breaking a field. The sod was dense and heavy and oxen could pull the breaking plow through the field more efficiently than horses. The breaking plow was a different piece of equipment from the plows that farmers would use after the fields had been broken. It was not financially efficient to purchase both a breaking plow and a regular plow. In either case, farmers usually walked behind the single-bottom plow while someone, perhaps a child, walked beside the oxen to keep them in a straight line. Once the fields were broken, a team of horses was used to plow and pull harvest equipment. Horses were easier to manage than oxen, and walked faster. However, much hand labor was involved in farming in the 19th century. 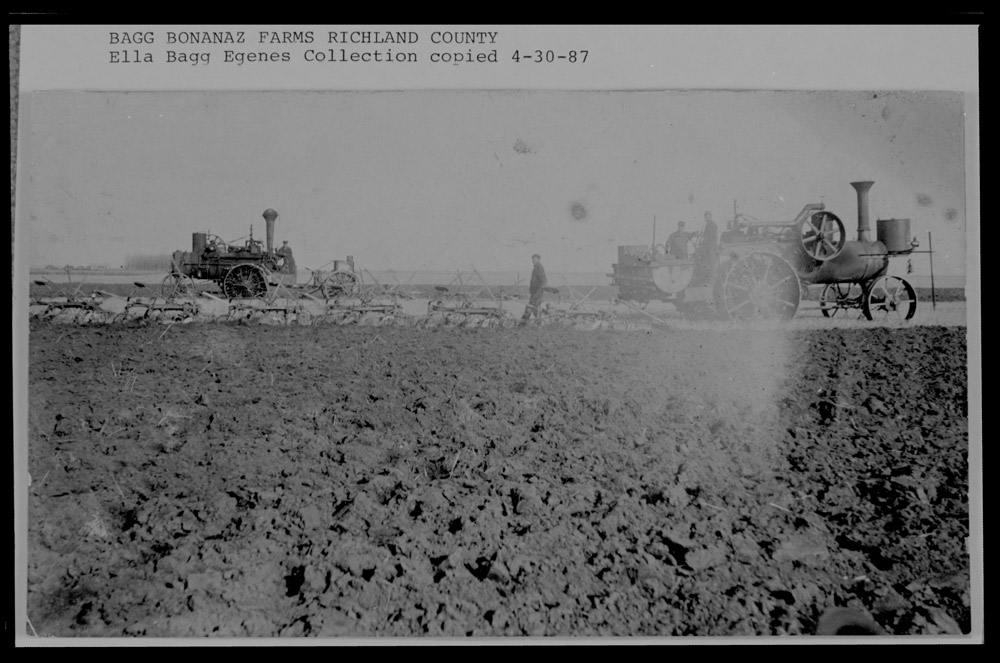 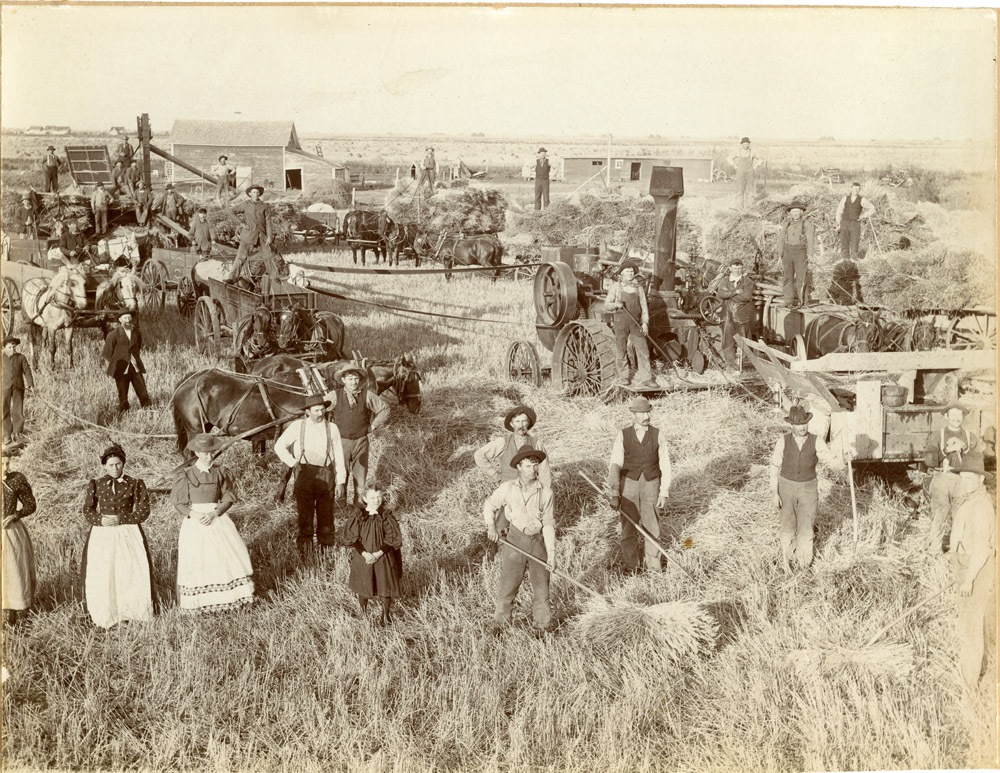 Image 22:  This photo of a threshing crew in Acton Township, Walsh County around 1900 shows the workers at their jobs. Teamsters drove the horse-drawn wagons to bring bundles to the thresher and carry wheat to the farm yard to be stored in the granary. The men with pitchforks tossed the bundles into the thresher. The engineer stands on the threshing engine in his greasy clothes. His job is to keep the tractor supplied with fuel and the gears greased and running well. The farmer’s family also appears in the photo. The women would soon return home to prepare meals of bread, meat, potatoes, vegetables, and pies to feed the crew. In the background, shocked wheat waits to be hauled in. Beyond the shocks, are straw stacks standing where the threshing is already done. Courtesy, Walsh County Historical Society SHSND WC-19.

Image 23: Olaf and Andrew Ruden owned a threshing engine and hired a crew each year to operate it. The Rudens traveled with their crew and equipment from one farm to another until all the wheat was threshed and ready to send to market. The threshing engine that powered the thresher had to be set far from the thresher in order to prevent the straw stacks from catching fire from a spark. The long belt carried power from the engine to the thresher. The engine operated on steam power, so barrels of water are available near the engine. Horses pulled the wagons loaded with bundles of wheat to the thresher. Horse-drawn wagons carried away the wheat kernels that were thrown from the thresher. This picture was taken near White Earth around 1915. SHSND 0032-MN-20-31. 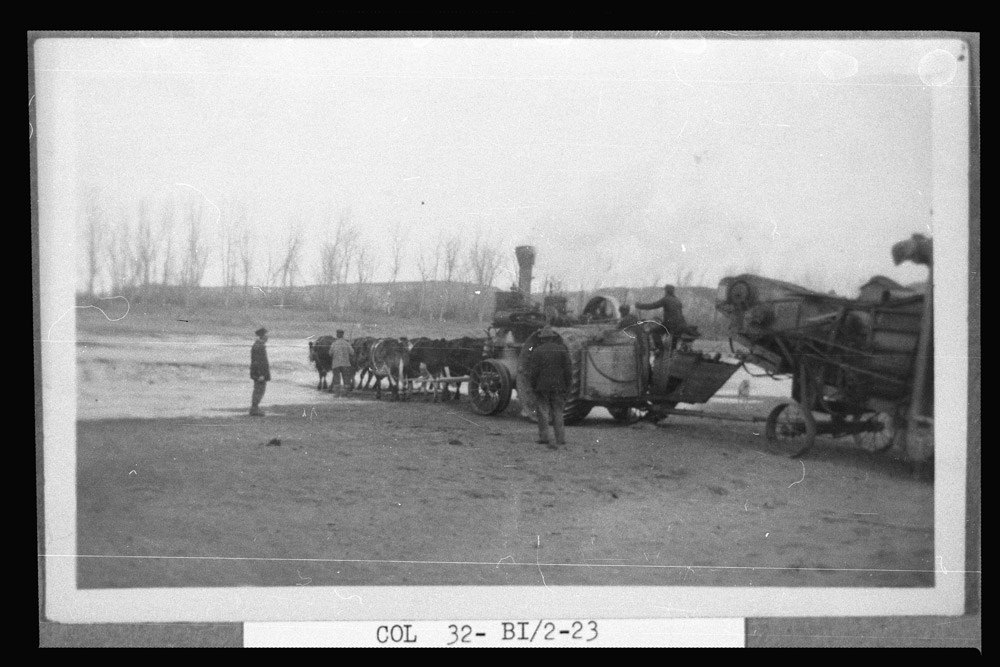 Image 24: Transporting a threshing machine and engine from one farm to another in 1908 required animal power (in this case a team of oxen). The engine and the thresher are linked together for transport only. Crossing a river where there was no bridge presented a special set of problems for the threshing crew. On this day, the Little Missouri River was low, but the crew had to find a solid bottom for all of that weight. SHSND 0032-BI-02-03.

When motorized equipment became available around 1915, some farmers were eager to purchase the new equipment. (See Image 20.) Tractors and threshing engines allowed the farmers to finish their work much faster. Farmers with power equipment often considered buying more land. More land meant more grain to sell in the fall.

Farmers who wanted to purchase a tractor that could pull a wider plow (four or more plowshares) had to have some extra money to spend. In 1917, Ford Motor Company made a Fordson tractor that sold for $750 ($13,276.79 today.)  The tractor would increase farm productivity. Extra production would help offset the cost of the tractor. However, in 1910, the average farm netted an income of about $400 ($9,708 today.)  A farmer who wanted to buy a tractor had to have some savings or good credit at the bank.

Some farmers utilized power equipment, but kept their horses. Tractors were expensive and did not have offspring to replace them as horses did. Farmers who kept horses never worried about starting the engine in the winter. However, horses could not work efficiently in extreme heat and had to be rested for a while every day.

Why is this important? Modernizing farms brought many changes to North Dakota. Farms became larger which increased farm income. Many farmers wanted to give at least 160 acres to each of their sons when the sons married, so it was important to acquire more land.

Farms with power equipment could produce more tons of crops. World War I (The Great War) broke out in 1914 in Europe. The greater efficiency of motorized farm equipment allowed North Dakota farmers to produce food to feed the people of the United States and Europe, even though farm workers were hard to find during the war.