When the first state constitutional convention met in 1889, the delegates considered two different approaches to constitution-building. One method used the U.S. Constitution as a model. This type of constitution provides a framework for structuring government, but laws were left to be written by Congress. On the other hand, constitutions can be written to include specifics about how the state would operate. Some historians say that this model incorporates law into the constitution which restricts future legislatures from making decisions. 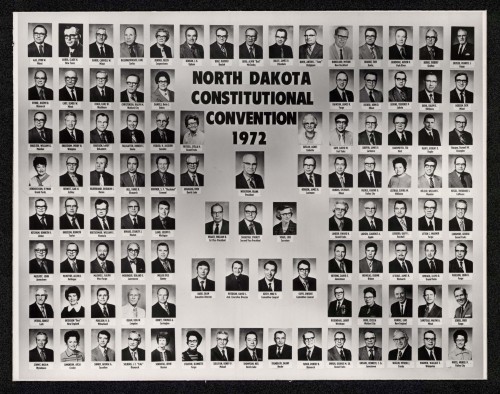 Image 9: In 1971, 98 delegates met to write a new constitution for North Dakota. After a year of research, writing, public meetings, and debate, the voters rejected the new constitution. SHSND 2012-P-010-01. 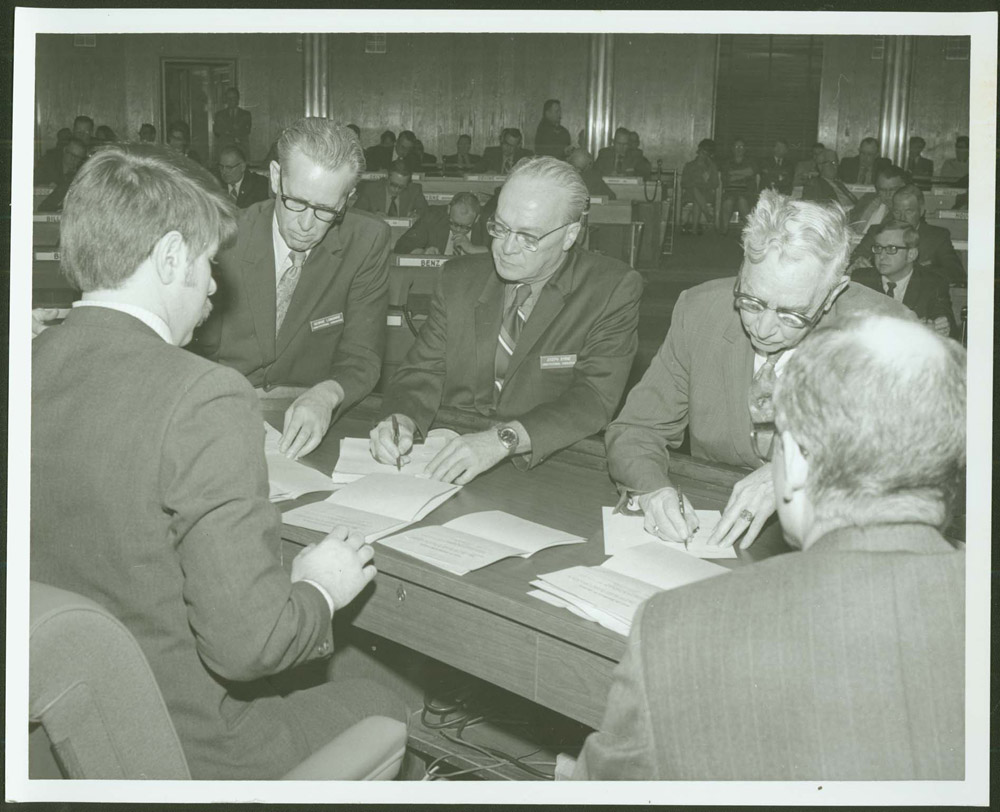 The 1889 delegates chose to follow the second model and wrote a lengthy constitution that created an intentionally weak government. The important leadership roles in government, such as the Secretary of State and Commissioner of Agriculture were elected by the people. The governor could make few appointments. This means that it was possible that the governor would be of a different party or a different political philosophy than other state officials.

The delegates thought they were creating a constitution that would be useful for many decades into the future. However, by 1969, the original North Dakota constitution had been amended 95 times. The amendment process is expensive because each amendment must be submitted to the voters for approval. In the 1969 legislative session, members of the House and Senate passed a resolution to amend the constitution to authorize a state constitutional convention. As required, the amendment went to the voters who approved the measure by a wide margin (65,734 to 40,094).

The constitution was debated in newspapers, cafes, and living rooms. (See Document 3.) Many parts of the new constitution were designed to make government more efficient. The new constitution allowed for seven elected state officials instead of 14 elected officials. In addition, the office of State Auditor would be changed to auditor general in the legislative branch. When re-apportionment of legislative districts was required, the process would be conducted by an independent commission of district judges. 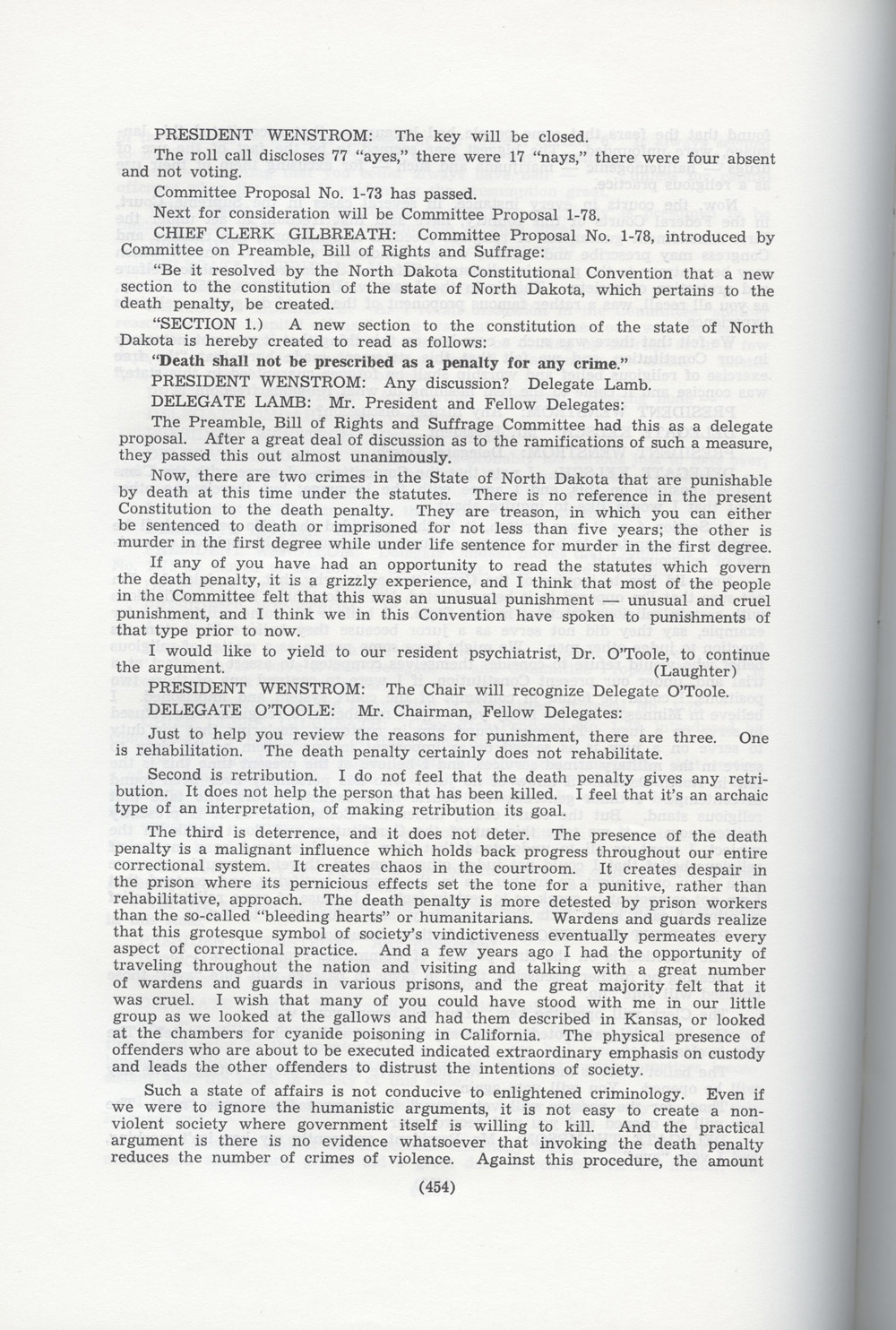 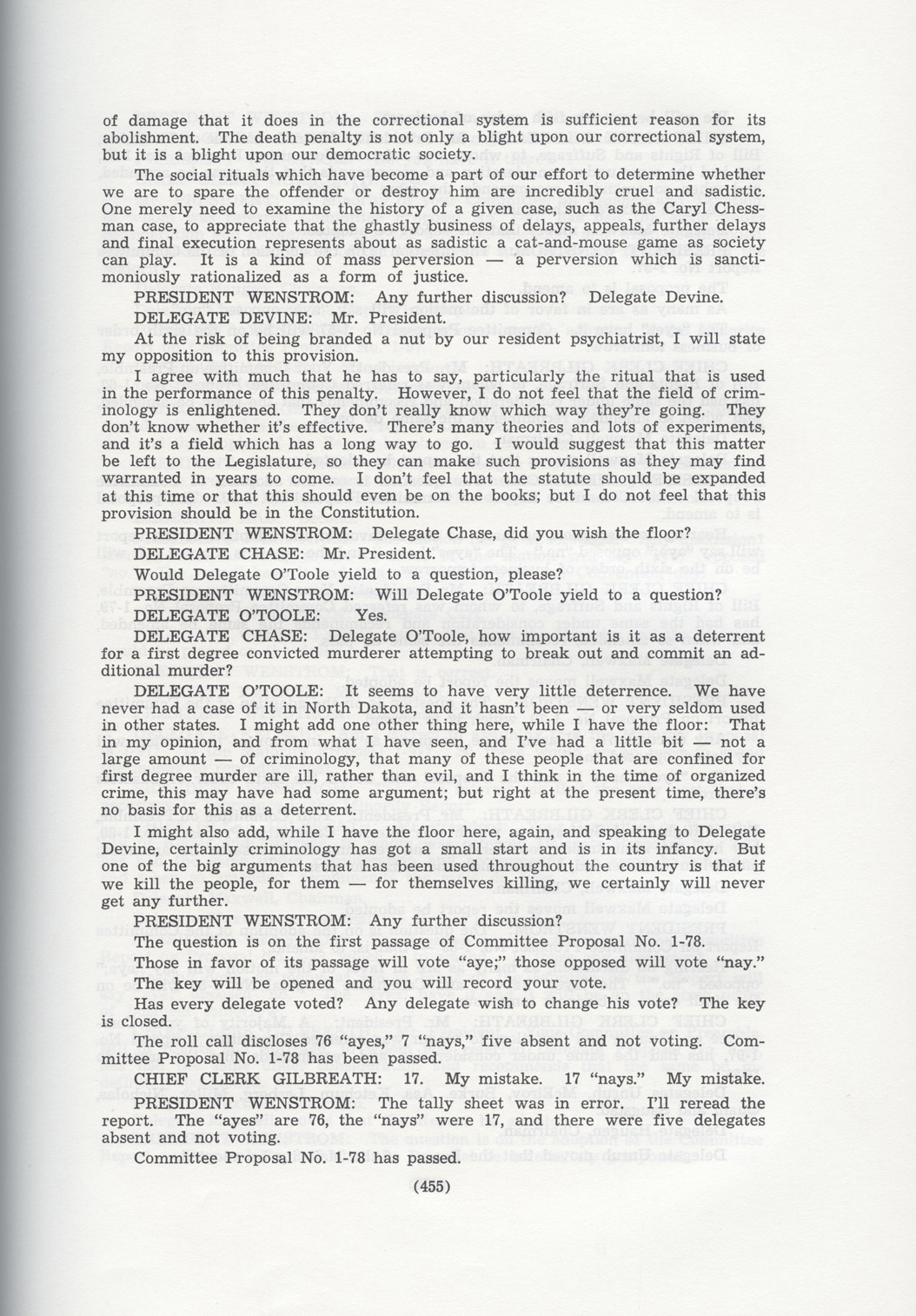 Convention delegates also presented voters with four constitutional clauses for a separate vote. If the voters approved, these clauses would become part of the new constitution (if the constitution was approved). One clause called for a unicameral legislature. This is a one-house legislative body. Today, only Nebraska has a unicameral legislature. Another clause offered full adult status to persons over the age of 18. Another clause increased the signatures needed for initiated and referred measures. The fourth clause would legalize some forms of gambling.

Rural electrical cooperatives thought the new constitution might interfere with the cooperative nature of their organizations. They might have been mistaken, but the issue would not be resolved unless it was decided by the North Dakota Supreme Court. The clause seemed too undefined for the cooperatives to give the constitution their full support.

The voters turned down the new constitution on April 28 with a vote of 65,734 to 40,094. Of the four separate clauses, the people rejected a unicameral legislature and lowering the age of adulthood. However, voters approved of the state instituting some gambling laws and raising the number of signatures for initiatives and referenda. The approval of these clauses served to guide the legislature in future decisions.

Why is this important? The kind of government we have depends on the wishes and efforts of the people. Constitution writing is complex and requires careful thought, research, and compromise. Though the delegates to the 1972 constitutional convention put great effort into their decisions, the people of North Dakota decided that they preferred the old constitution even though it would need further amendments.