Section 3: The Church as Social Center

In a settlement community the church was often established before any other institution. Though faith brought people together, social events were an important part of the church’s role, particularly in rural communities. 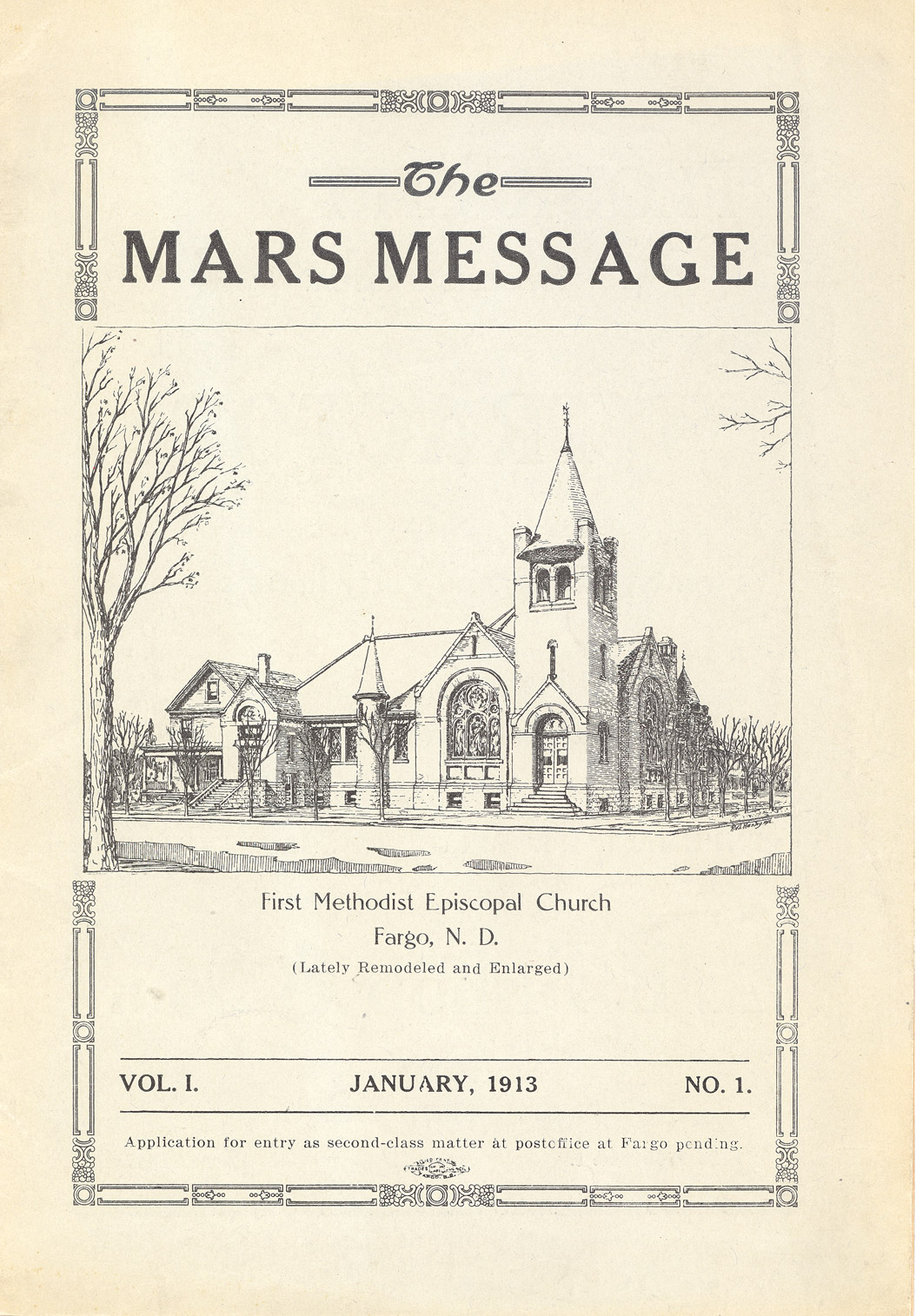 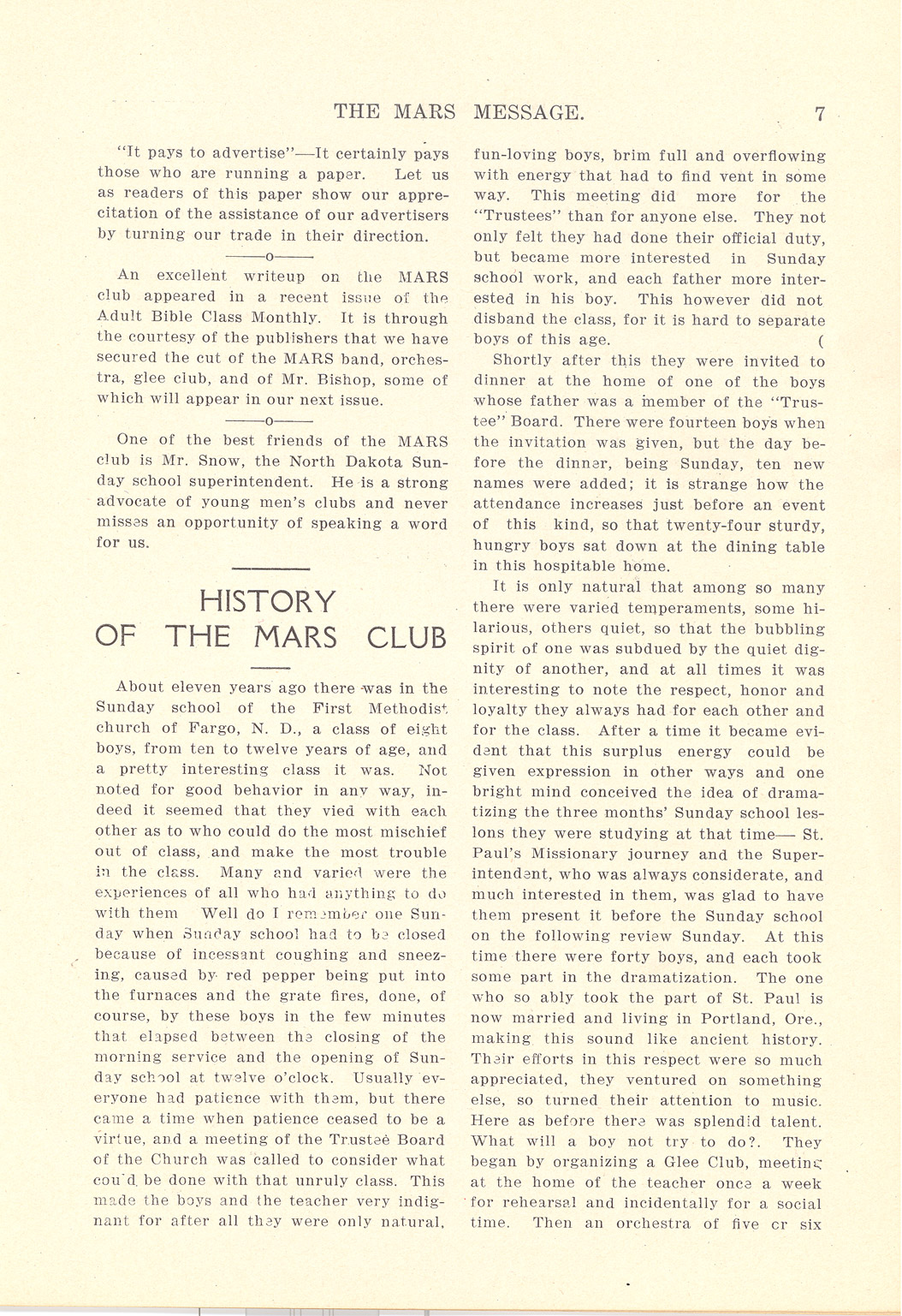 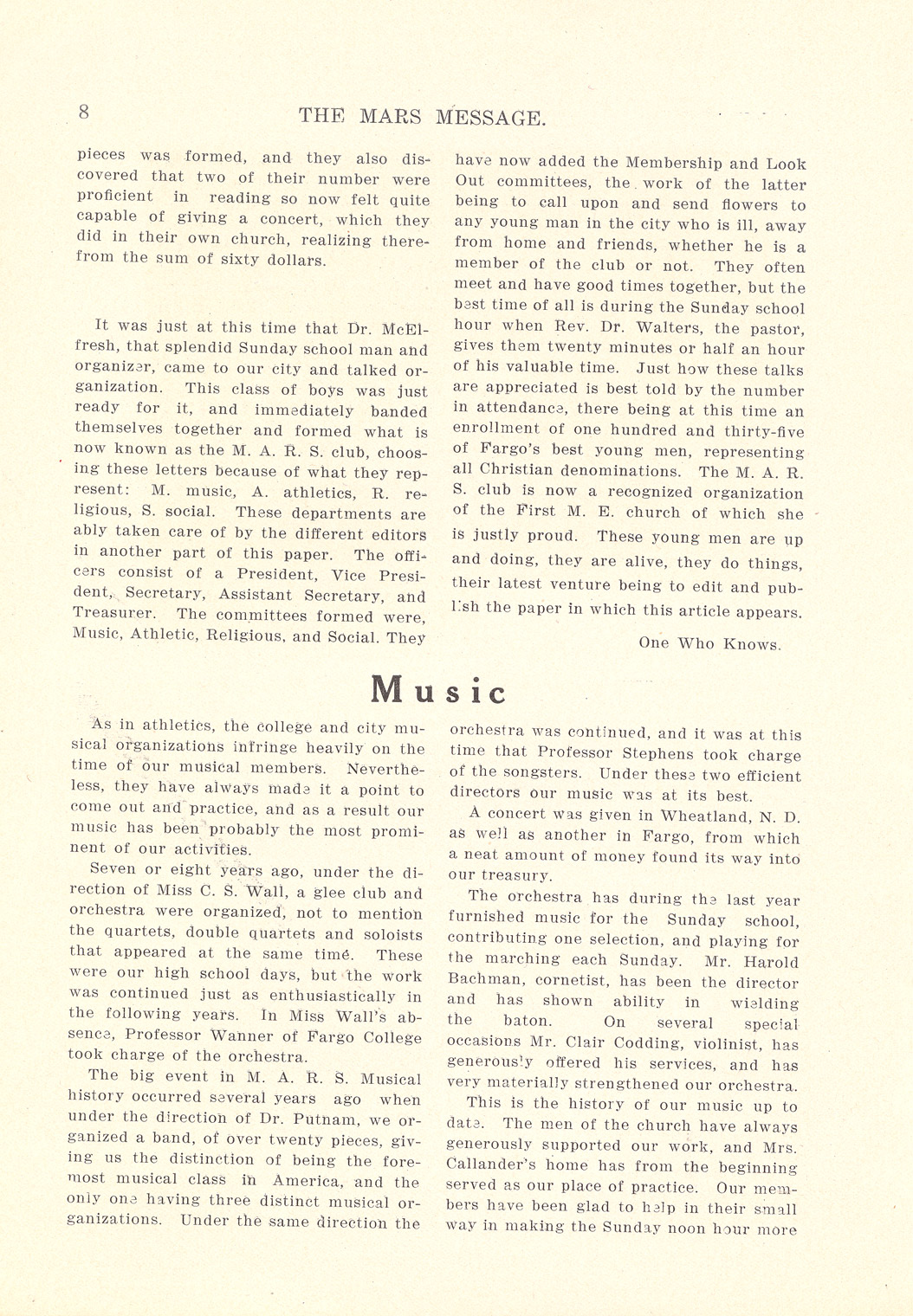 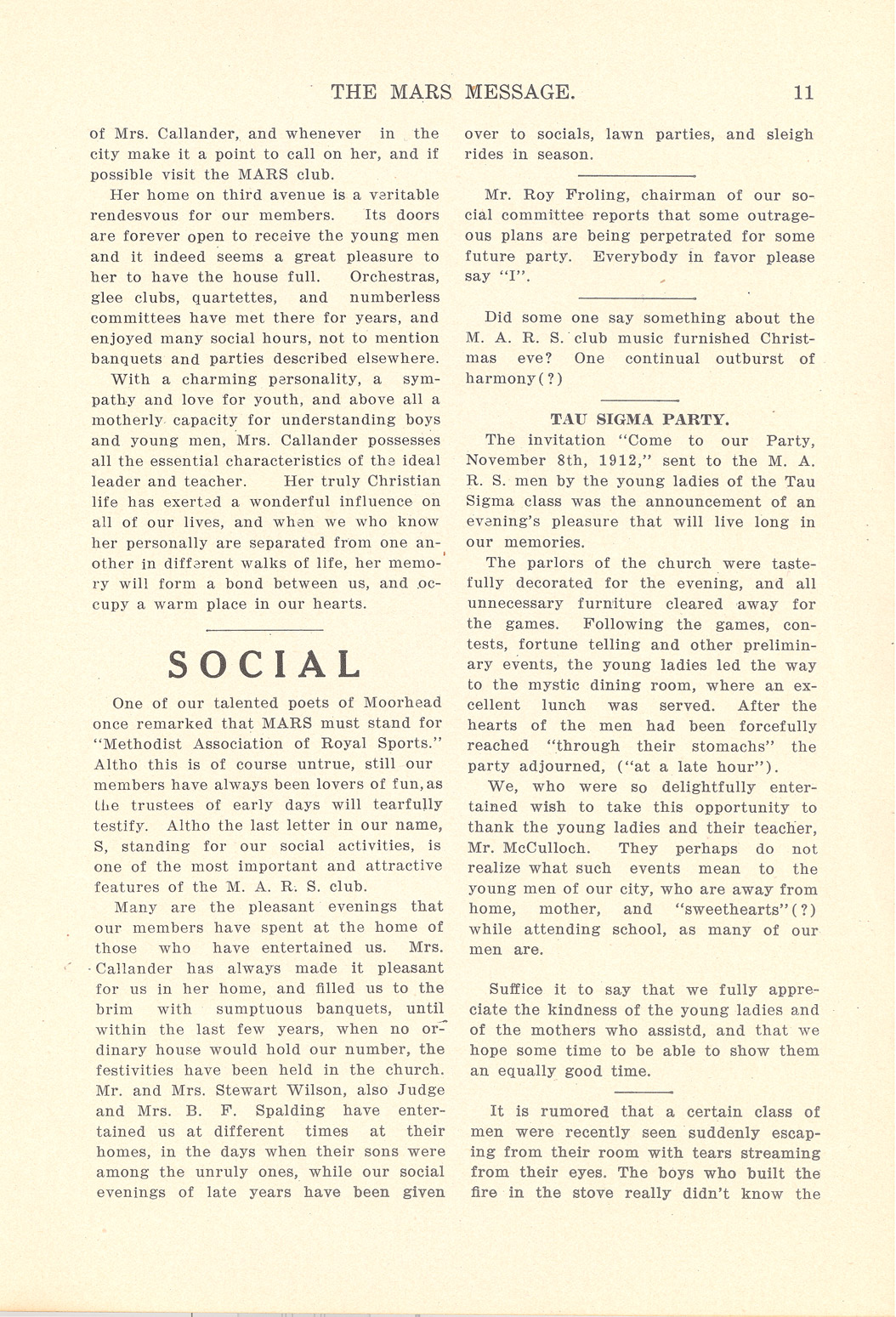 Ladies’ Aid societies led many of the social events including Fourth of July picnics and Fall Harvest Suppers. Youth groups, such as the MARS group at the First Methodist Episcopal Church in Fargo provided social, athletic, and musical activities for the young people of the church. (See Document 3) Over the years, men’s groups and mother’s societies provided social activities within a spiritual framework.

Churches observed special holidays, such as Christmas, with religious services. At Christmastime, there were also social events at which children received gifts such as candy and fruit. Some pioneer children saw oranges for the first time at Christmas socials. 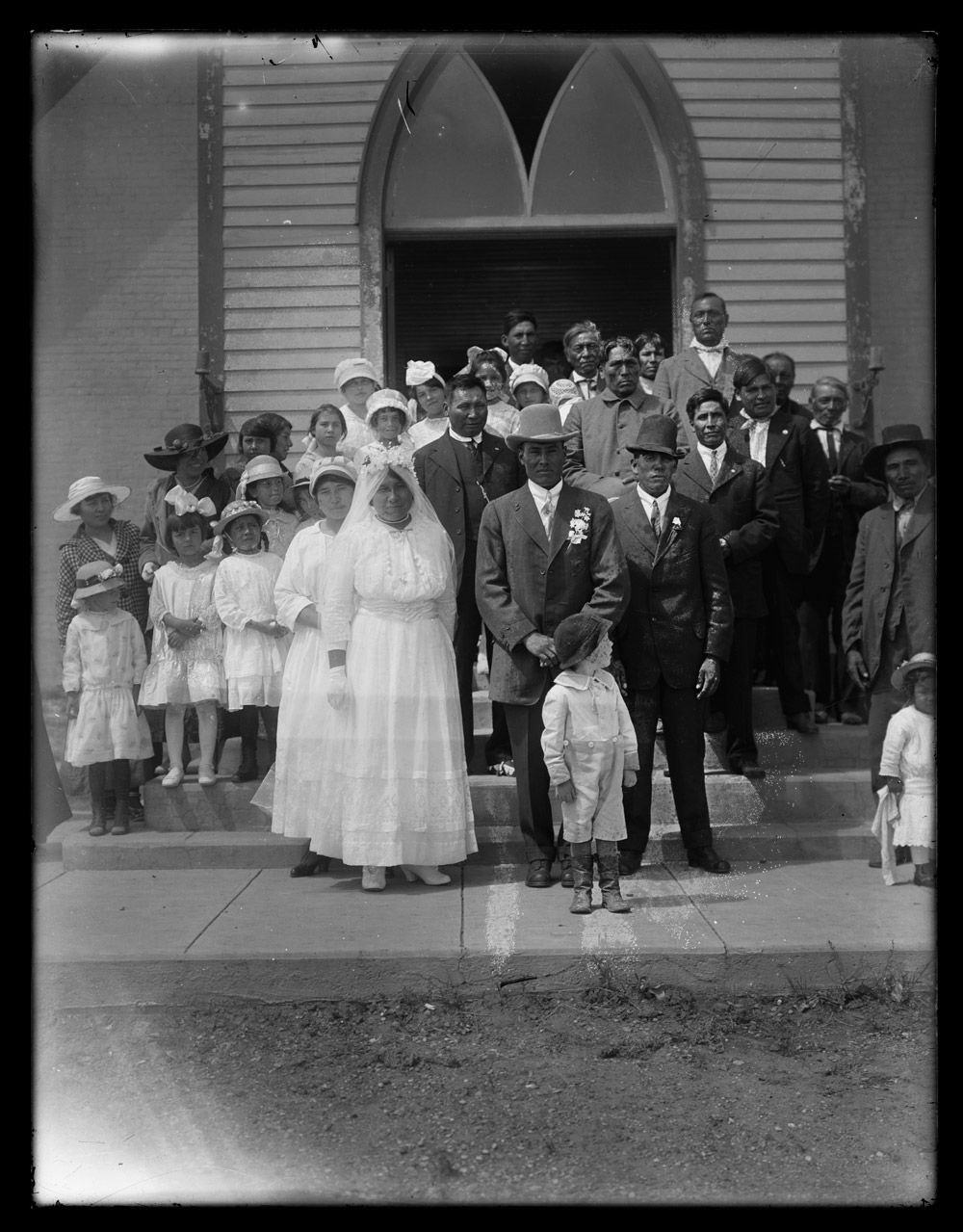 Image 8: The guests dressed up for the Christian wedding of Harry Gray Bear and Maggie Standing Soldier at Fort Yates in 1916. The Gray Bear family grew with the births of four sons over the next 15 years. SHSND 1952-0047 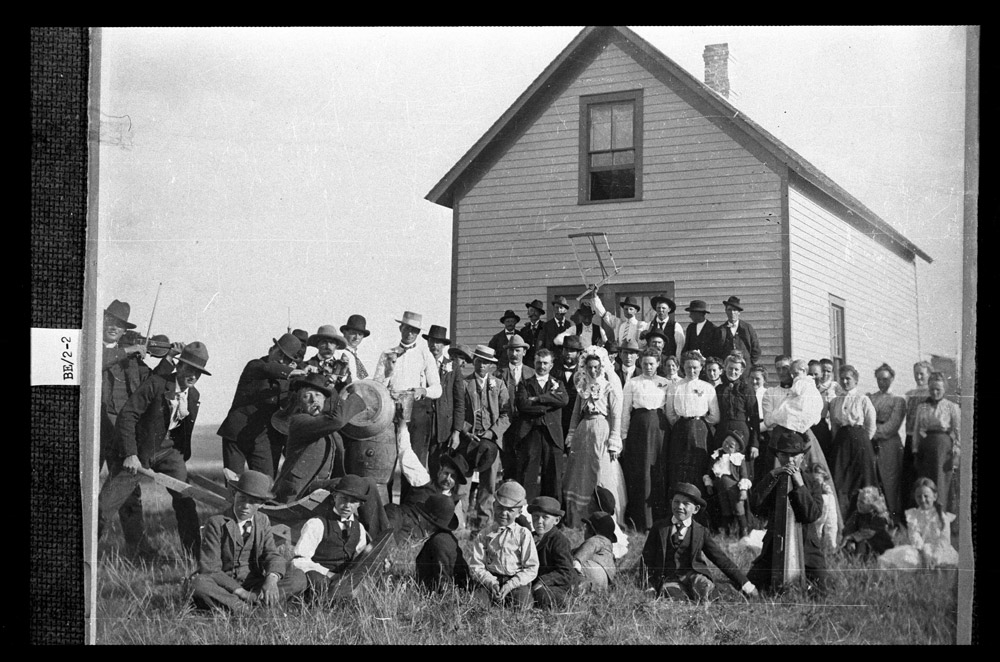 Image 9: J. R. Eide and his bride (name unknown) appear outside the church just after their wedding. While the women in the photo appear fairly solemn, the men are prepared to provide music and fun for the wedding celebration. SHSND 0032-BE-02-02

Baptisms, weddings, and funerals were solemn occasions, but following the church service, the gathering of friends and family marked the event with food and conversation. (See Image 8) Weddings could be extended celebrations lasting days and involving several meals, dances, and general merriment. (See Image 9) 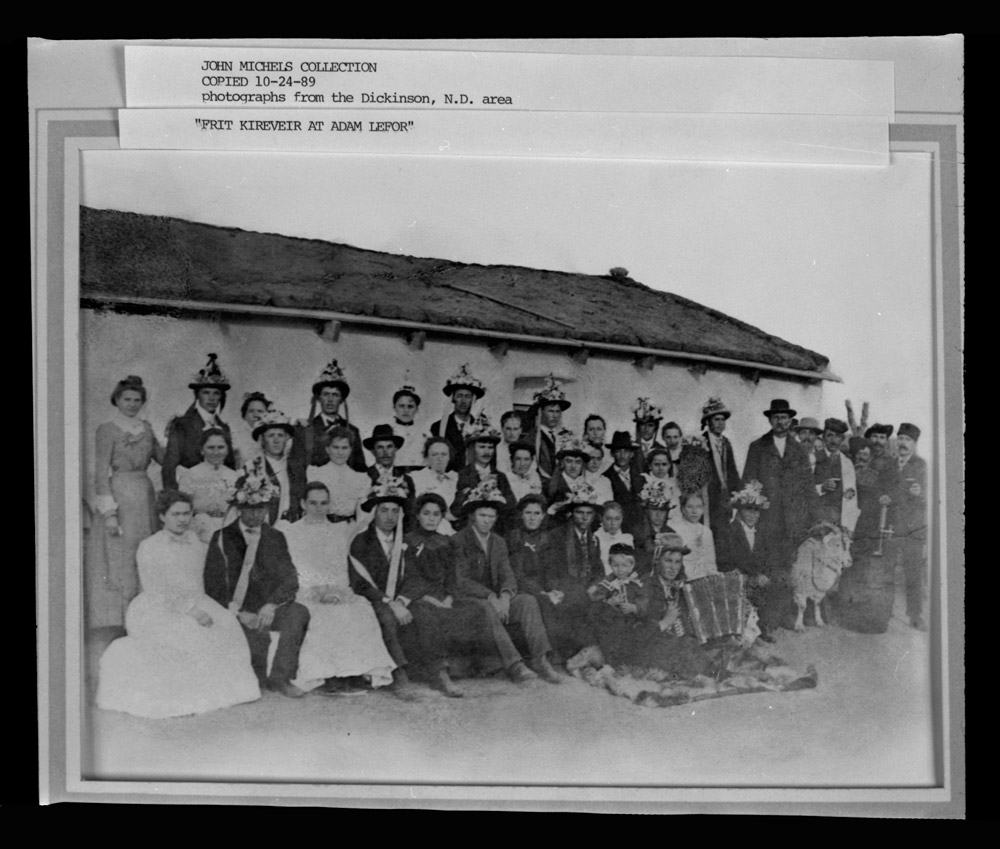 Image 10: Franz and Theresia Mayer married in 1910 near Dickinson. Weddings were a time for people to celebrate their ethnic heritage. The elaborate hats are traditional for this group of settlers who came originally from Austria. Beer and music will be part of the wedding celebration. It is not known why the goat attended the wedding party. SHSND 0818-005

Religious affiliation also served to draw settlers to a community. Black Sea German (Germans from Russia) Catholics tended to form communities of people who not only worshipped at the same church, but came from the same region of Russia. For instance, Black Sea Germans of the Catholic faith who emigrated from the Kutschurgan region of South Russia gathered again in southern Emmons County. They named their communities, such as Strasburg, after the towns they had left behind in Russia. In Morton and Stark counties, Black Sea German Catholics from the Beresan region of Russia settled near other people of the Catholic faith. These settlements allowed the Black Sea Germans to retain the culture and social relations of their homelands while pursuing their faith in the new country. (See Image 10)

North Dakota’s churches had another important role in the community. Churches or religious groups established parochial schools, mission schools on reservations, and hospitals. The schools were designed to educate children within a framework of faith. Norwegian Lutheran parochial schools usually met for a few months in the summer, but Norwegian Lutherans also established Oak Grove School, a boarding school in Fargo. Lutherans and Catholics also established hospitals which served members of their faith and the general public. In many communities, most health care was provided by church-based hospitals.

Churches also served as the foundation for mutual aid societies. These organizations provided members with financial support in case of death or injury. Mutual aid societies were popular among both Lutherans and Catholic “Bohemians,” who had emigrated from the region of Eastern Europe that is today called the Czech Republic. The Catholic Workman Society, Katolicy Delnik, was founded by Czech immigrants in 1891 in St. Paul Minnesota. This group became a national organization the next year. By 1910, there were six Orders, or chapters, in North Dakota with 146 members. The largest of these orders (with 47 members) was in Pisek. Mutual Aid societies usually insured the life of the father of the family whose earnings would be lost in case of his death or injury. The average payment on a policy was about $1144.

Why is this important? Communities of faith gave settlers a source of support in hard times and helped to provide a cultural home for immigrants newly arrived in the United States. Settlers met their neighbors in church and came to know which of their neighbors shared their faith and culture. The church also served to ease the transition to the new culture as congregations and youth organizations began to use English in worship and activities.

Social activities helped to bring members across the prairies to the church and helped to keep young people’s interest in the church. Churches also supported the state’s interest in social order. The teachings of all churches on the sanctity of marriage and family provided a local support system for state law.

Churches and church-based organizations also provided important community services to the poor, ill, and needy. In the settlement era, churches provided the sole source of social welfare services to their communities.