The Soo Line began its corporate existence as a small Minnesota rail line. In 1888, the company purchased the Aberdeen, Bismarck, and Northwestern Railway which had not been completed. The new company formed by the two railroads was called the Minneapolis, St. Paul, and Sault Ste. Marie (soo saint mar EE) Railway. Before very long, most people called the railroad the Soo Line.

Image 15: Railroads provided many permanent and seasonal jobs for young men. They worked on track crews, train crews, and station workers. In this photo, Mark A. Smith and his friends pose for a photo at Brinsmade northwest of Devils Lake in Benson County. Smith and his friends worked for the Soo Line. SHSND 0032-BA-22-09

The Soo Line connected with rail lines that led to Chicago, Boston, and Montreal. The railroad did not have tracks to the Pacific coast. The first president of the Soo Line was W. D. Washburn who served Minnesota in the U. S. Senate and owned a lignite coal mine in Wilton, North Dakota. Washburn also owned flour mills in St. Paul.

The Soo Line entered North Dakota in 1891 from the southeastern corner of the state. The railroad’s goal was the town of Portal on the Canadian border. It took two years to build the road from Hankinson to Portal. The line passed through Valley City and Harvey along the way. (See Image 15)

The Soo Line also built roads to Kulm, Wishek, and Bismarck. Later, the line went north to Garrison, Plaza, and Ambrose. The Soo built a complex of branch lines throughout southeastern and northwestern North Dakota, always staying to the east and north of the Missouri River. The Soo Line eventually purchased the Bismarck and Washburn railroad. Both railroads were owned by W. D. Washburn. 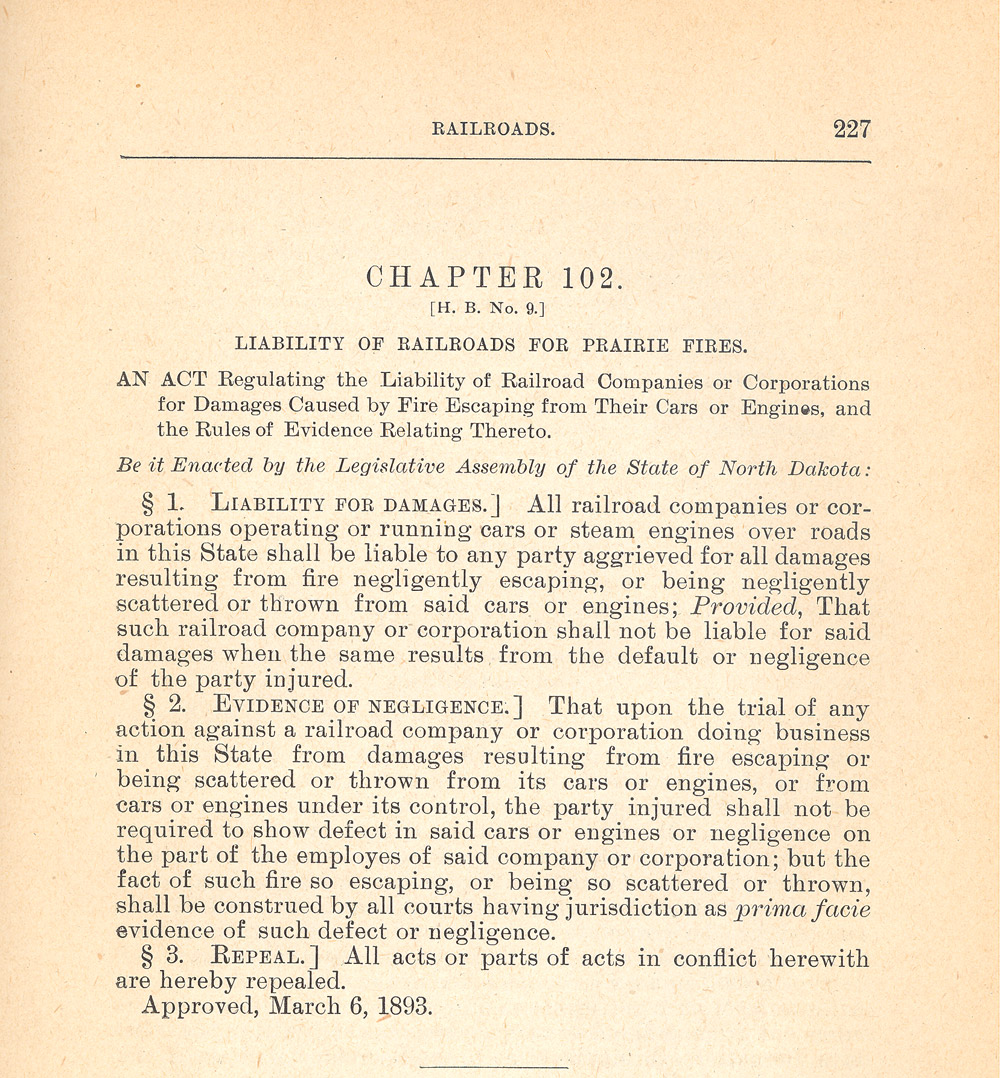 Document 4: The North Dakota legislature did not impose a lot of strict regulations on the railroads. However, it was important that the railroads contribute to prevention of prairie fires because sparks from coal burning engines often caused prairie fires. This 1893 law made railroads responsible for fires caused by sparks from the engines.

The Soo Line, like its competitors the Great Northern Railroad and the Northern Pacific Railroad, built telegraph lines along the tracks. The telegraph was an important communication instrument for the railroad. The telegraph (a means of communicating by a code of dots and dashes, or short and long taps) allowed station masters to communicate important information about trains, derailments, schedule delays, and repairs to another station down the line. People who lived in or near a railroad town could also use the railroad’s telegraph line to send a message to someone far away. (See Document 4; See Image 16) 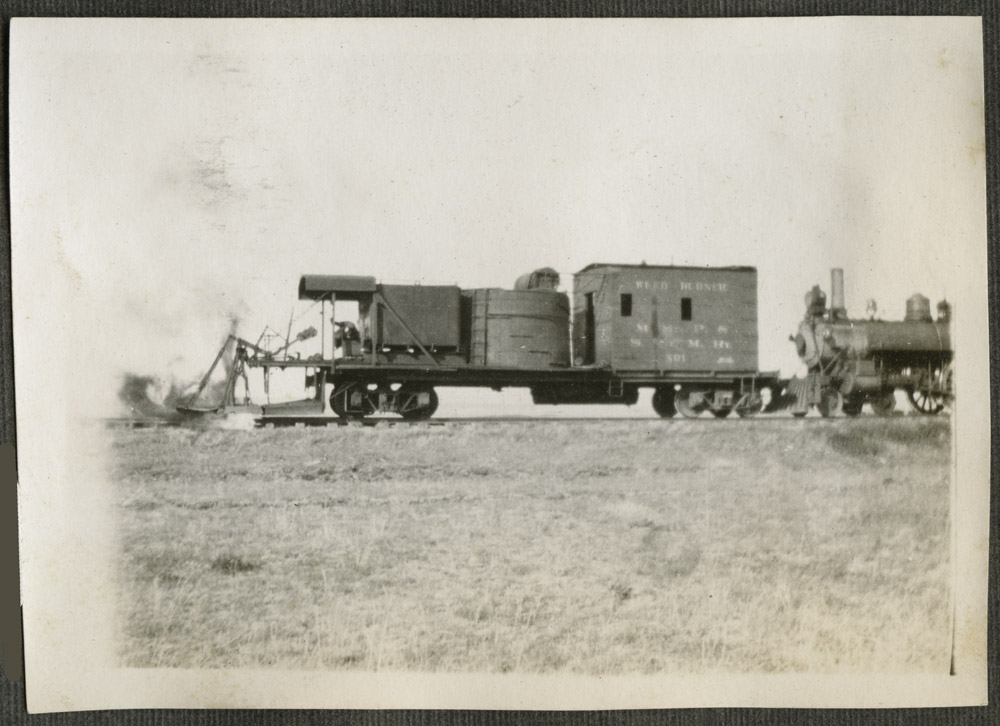 Image 16: The 1893 North Dakota law required the railroad companies to clear weeds from the tracks. The weeds were considered a fire hazard in dry weather. Trains burned coal or wood and threw sparks that could easily ignite dried weeds and start a prairie fire. This photo shows a Soo Line special engine designed to burn weeds on the tracks at work near Wishek. SHSND 0392p0021-0097.

In 1904, the Soo Line built tracks from Thief River Falls, Minnesota to Kenmare, North Dakota. This road was nicknamed the Wheat Line. As the Soo Line engaged in a track-building “war” with the Great Northern, it built new tracks and new towns. (See Image 17) The Soo Line built 500 miles of tracks in the summer of 1905. (See Document 5) The company had to finish the tracks in time to transport the wheat harvest from North Dakota to St. Paul. There were many places where farmers could choose between shipping their crops on the Soo Line or on the Great Northern. The Soo Line cut its freight rates to win new customers.

Railroaders were respected workers in many communities. They worked hard and kept small towns in touch with other locations. In this memoir, a man recalled the difficulty of building and maintaining new track and telegraph lines for the Soo Line Railroad. “My Father was a Railroader” publication unknown, collected in Soo Line, General Information File, SHSND. 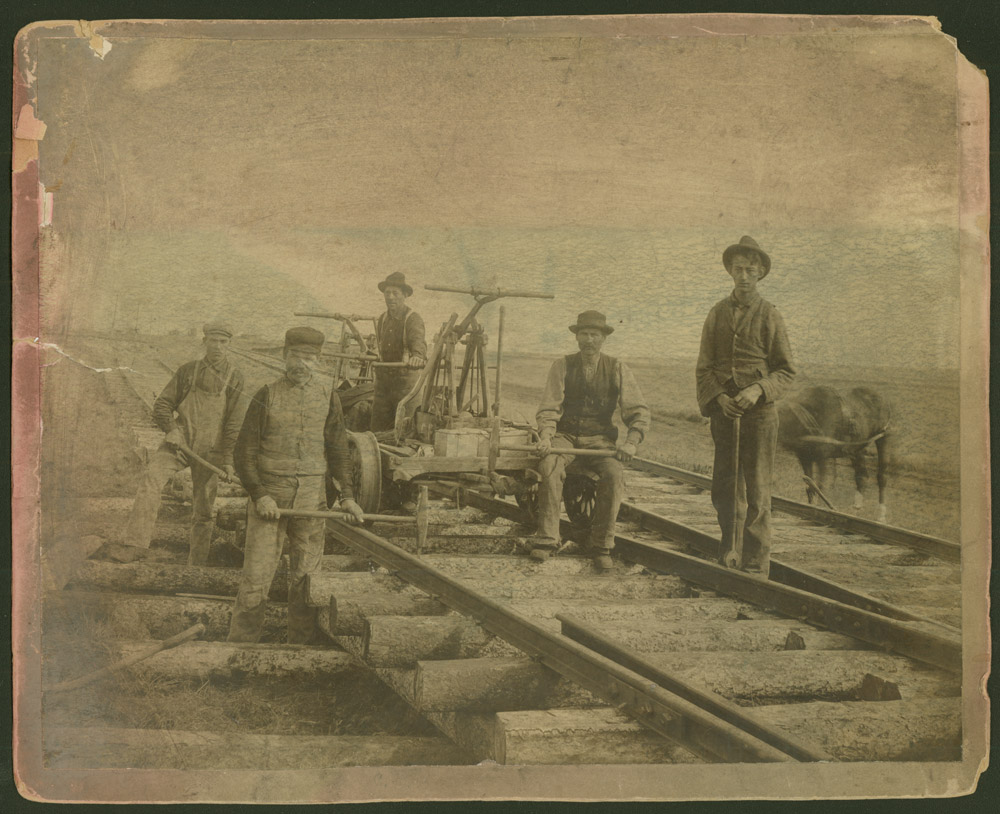 Image 18: The Soo Line built tracks to Bathgate and many other new towns in 1905, during the “railroad wars.” The tracks were built by men using hand tools for many years. Workers like "father" used a handcar to carry tools and equipment to the work site. SHSND C1724

“The work was hard. Everything was done by hand; the holes for the poles were dug by hand - - four to six feet deep depending on the type of soil -; wire was strung by hand - - two men would take a hundred pound spool of wire with a crowbar through the center [of the spool] and set off down the line, unrolling wire as they went. The men who worked on the ground were known as “grunts”; those who climbed the poles were known as “monkeys.” When the wire was strung out the “monkeys” with the wire over their shoulder, would climb the poles and put the wire in place. Then the “grunts”, with block and tackle, would pull the wire tight and the “monkeys” would fasten the wire to the insulators. They would do about a quarter of a mile at a time.” (See Image 18) 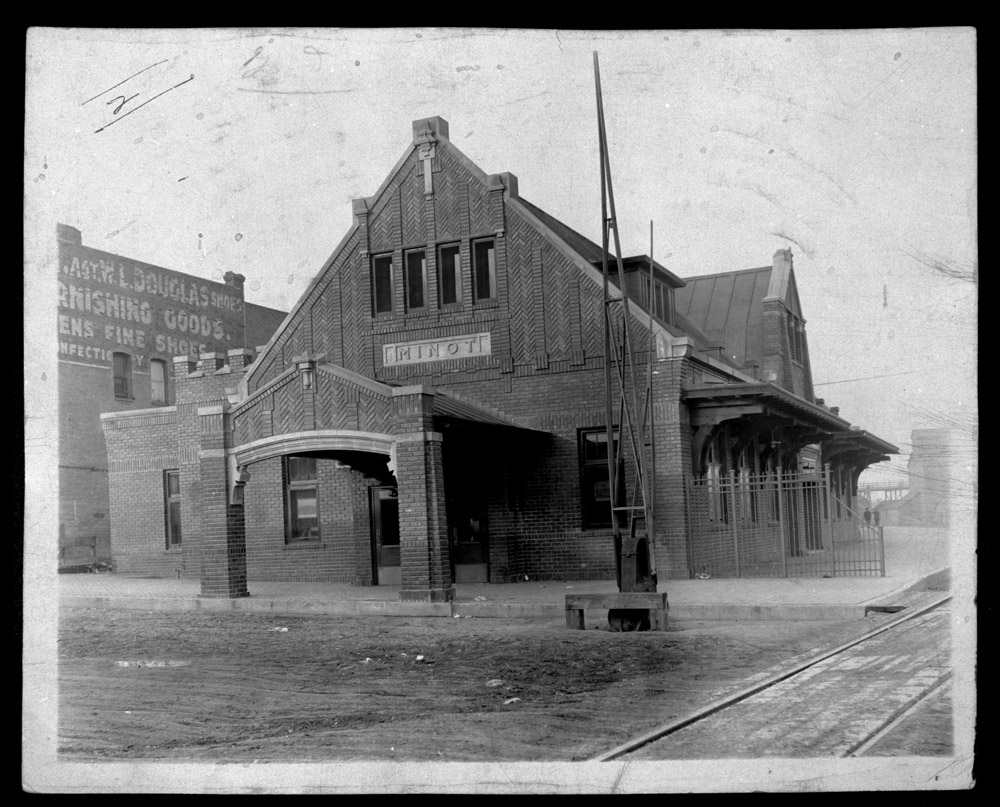 Image 17: The Soo Line and the Great Northern competed for business in the northern portion of North Dakota. Each line had a distinctive style of architecture for its main depots. SHSND 0283-0009.

Like the Great Northern railroad, the Soo Line built towns along its line, especially in northwestern North Dakota. (See Image 19) The Soo’s towns, however, tended to be more successful than those of the Great Northern. One of the reasons for success was that the towns were platted (mapped) before the first train chugged into town. People already had homes and businesses before the railroad arrived. Many of these towns were built in the summer of 1905. The largest of these is Rolette. Farmers liked Rolette as a place to do business, so it grew while many of the other towns faded away. (See Map 3) 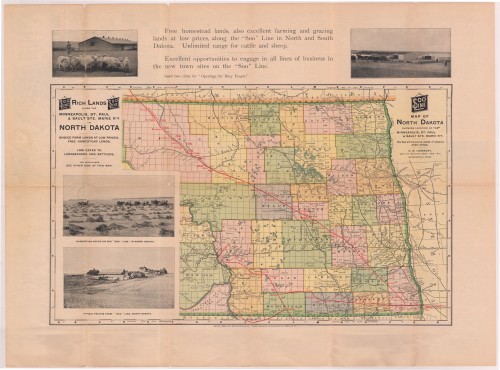 Map 3: The Soo Line, the Great Northern, and the Northern Pacific all tried to encourage settlement and farming along their tracks. In this 1901 pamphlet, the Soo Line advertises “free land” of a “superior quality” and reduced travel rates to settlers. The map features the lands along the Soo Line. SHSND 2005-P-37. 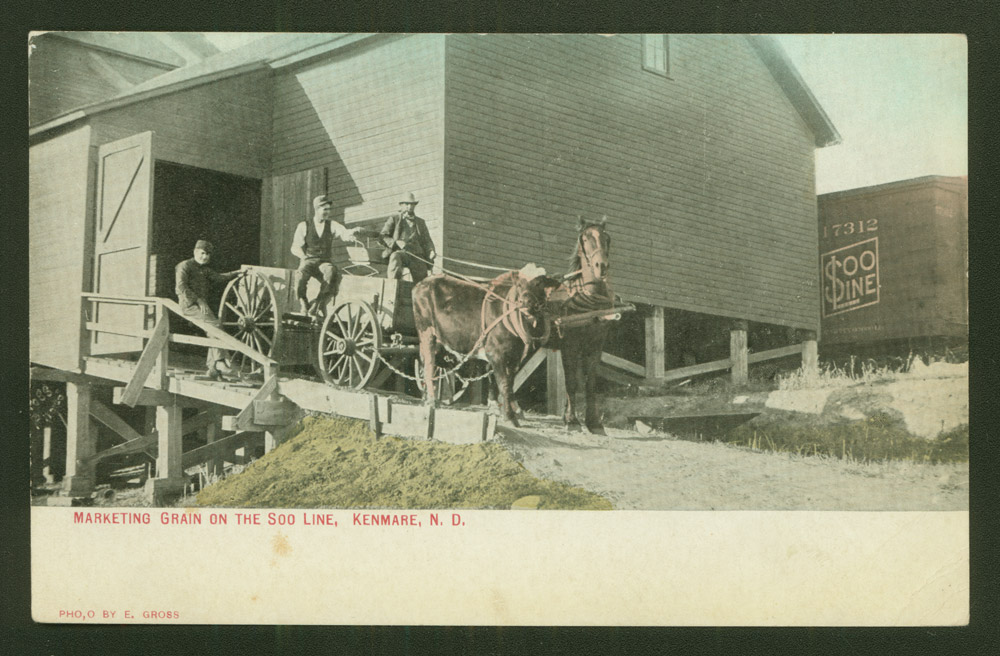 Image 19: The Soo Line opened the northwest portion of North Dakota. The railroad brought settlers to farm land northwest of Minot and provided elevators so that farmers could send their grain to market by train. This photo shows farmers marketing their grain in Kenmare. SHSND B0756-18

Why is this important?  The Soo Line built more than 40 per cent of its tracks in North Dakota. Because North Dakota was so important to its overall success, the Soo Line was often called North Dakota’s railroad.

Of course, neither the Soo Line nor the Great Northern won the track building “war” of 1905. However,  because of the rapid expansion of the two railroads, farmers had more access to rail lines, which forced the railroads to reduce their freight rates. The lower rates benefitted the farmers.