In 1878, Hill and his partners bought The St. Paul and Pacific Railroad. The next year, the company built a bridge across the Red River at Grand Forks. Over the next few years, Hill expanded his railroad into northern Dakota Territory cities and took his road as far as Minot. By 1887, the railroad, now called the St. Paul, Minneapolis, and Minnesota Railroad, reached Helena, Montana. (See Image 10) In 1893, the railroad reached all the way to the Pacific Ocean. 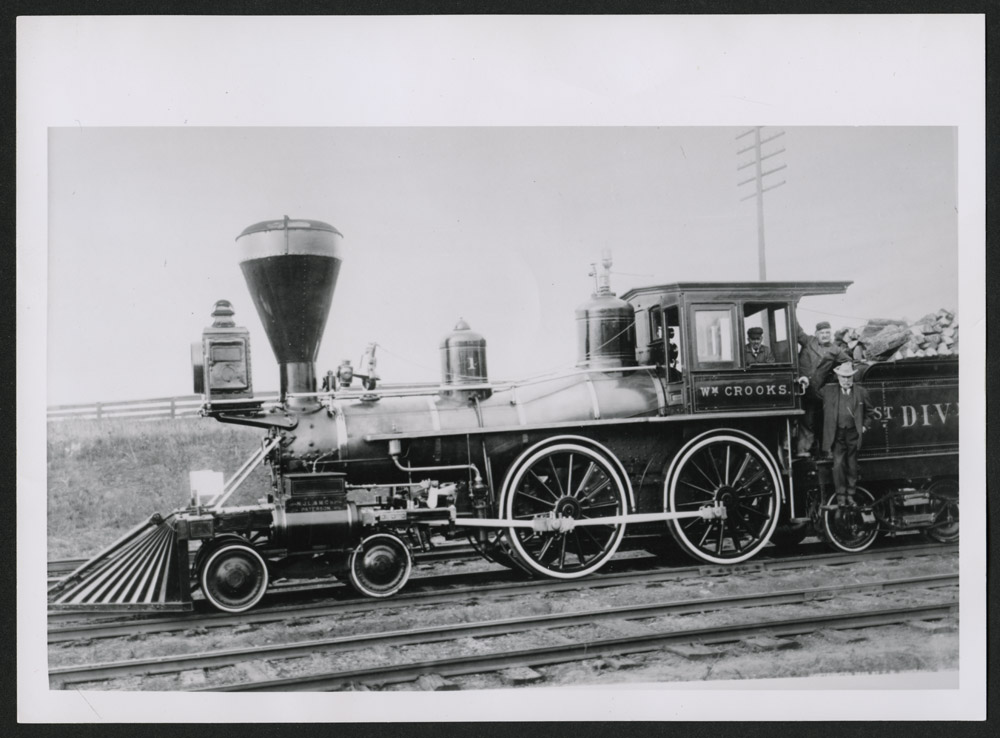 Image 10: James J. Hill, known as the Empire Builder, was president of the Great Northern Railway. He often personally supervised the construction of tracks. In 1908, Hill (with straw hat and beard) posed on the engine of the train that he rode to oversee construction of tracks in Montana in 1887. The engine was known by the name William Crooks. SHSND A3673

In 1889, Hill changed the name of the railroad to the Great Northern Railroad (GNRR.)  The GNRR took a northern route across North Dakota. It expanded west from Minot to Williston. However, it also had a line which ran through Fargo and headed northwest to Surrey, near Minot. (See Image 11) 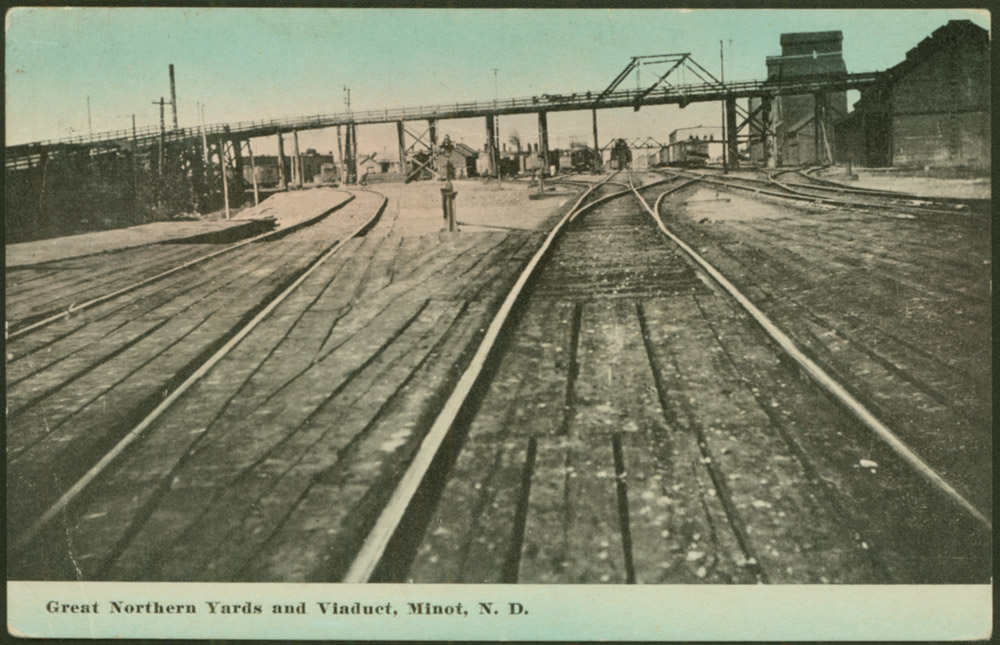 Image 11: The railroad companies built “yards” in certain cities along the line. At the yards, the trains cars were attached to or detached from the engines. The engines were repaired at the yards. Special equipment, such as snow removal engines were stored at yards. Many railroad workers worked at these rail centers such as this Great Northern yard in Minot. SHSND B0756-36.

James Hill was a man of great vision and a smart businessman. He built the Great Northern without federal subsidies such as the federal land grants and loans that had helped the Northern Pacific (NPRR) cross the continent. He did not stay in his St. Paul office all of the time. He liked to go where the tracks were being built, meet the townspeople and farmers along his route, and make decisions about where to build towns and depots. (See Image 12) (See Document 2) 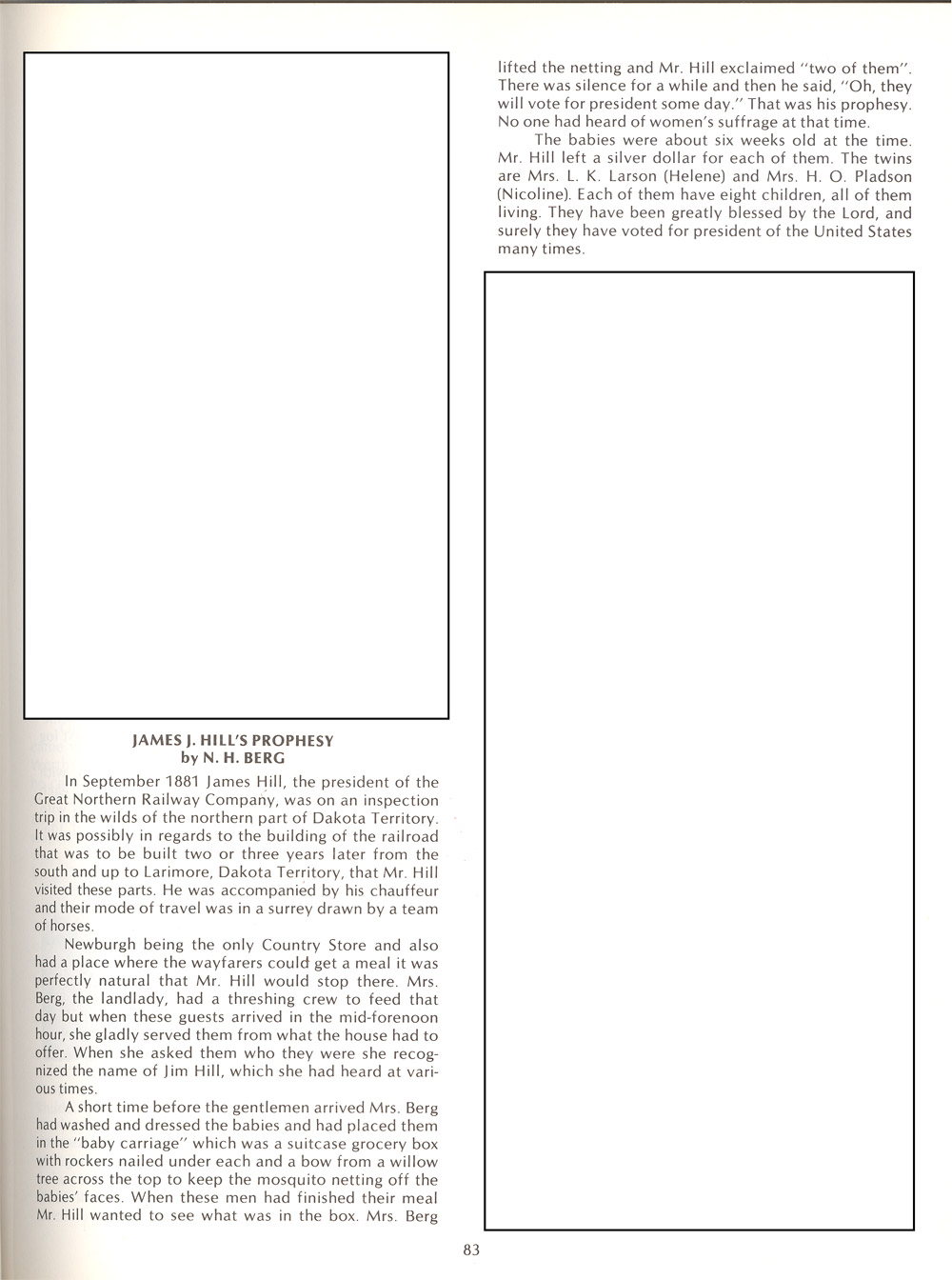 Document 2: James J. Hill, owner of the Great Northern Railroad, liked to travel through the farms and towns his railroad served. In the 1880s, he stopped at a farm for a meal and met the young family of Norwegian immigrants Nicolai and Tonetta Berg. This is how they remembered that visit. Steele County 1883-1983: A centennial commemoration (Finley: Steele County Press, 1983): 83. 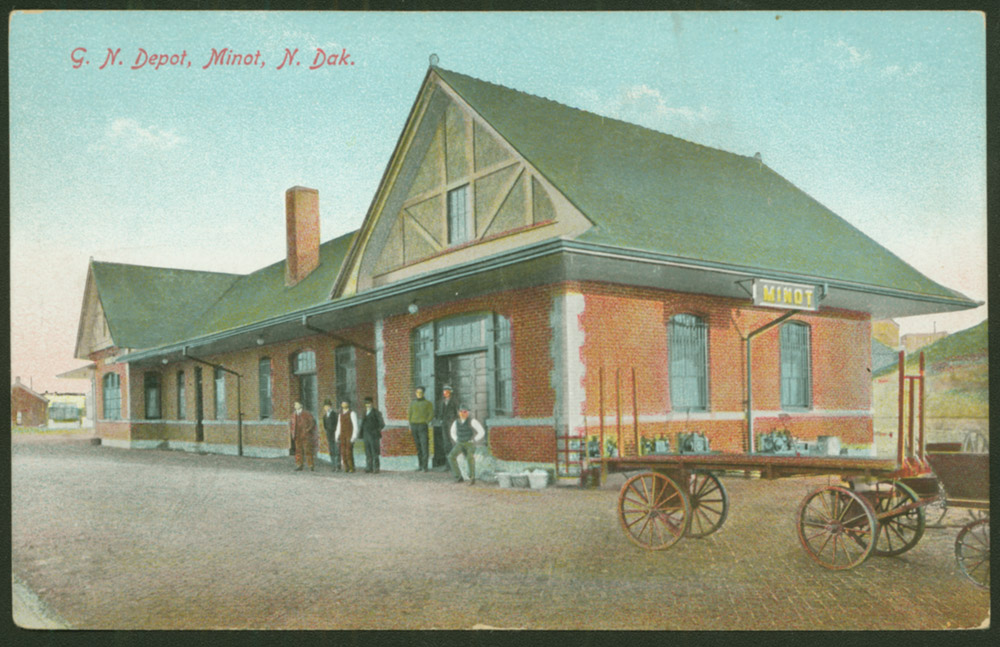 Image 12: The train ran through many towns that did not have a station. People who lived near the tracks often sent letters to James J. Hill requesting a station that would bring more people to their area and provide jobs. Grand stations were built in major cities along the line. Minot had stations (also called depots) for the Great Northern Railway (in this photo) and the Soo Line. SHSND B0756-40.

The Great Northern was especially known for its efforts to improve farming along its lines. The railroad company outfitted a special car that took displays and programs about North Dakota agriculture to other states. The company also had a demonstration car that presented the newest ideas about farming. This train car went from town to town educating farmers on how to improve their production. 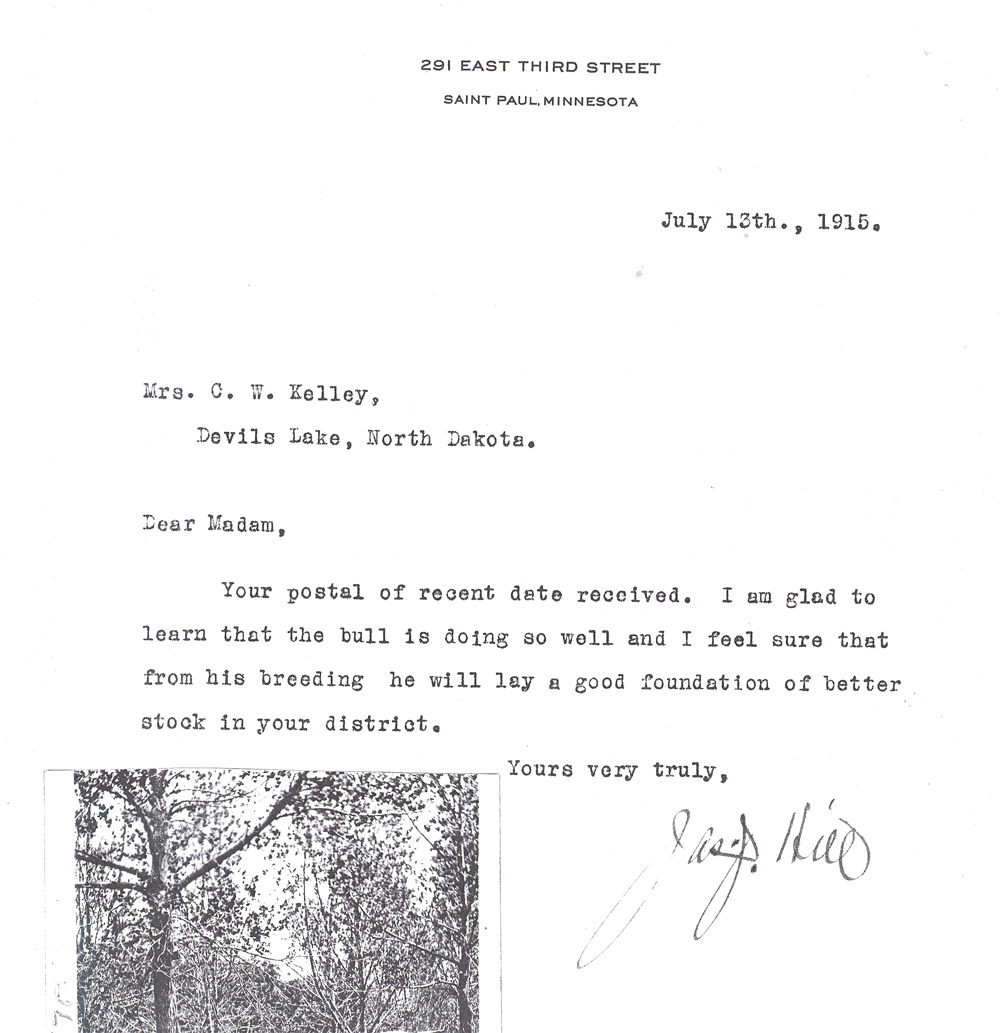 Document 3: James J. Hill often gave pure-bred livestock to farmers along the line. He intended for these “model farmers” to demonstrate to their neighbors how to best improve their agricultural operations. One of these farmers was the wife of a Devils Lake banker. Mrs. Joanna Kelley ran White Farm where she raised cattle, pigs, chickens and garden produce. Everything on her farm was white, including her collie dogs. Berg gave her a registered bull to improve her herd. Courtesy NDSU Institute for Regional Studies, Joanna Randolph Kelley Hollister Papers, Mss 4.

Hill also helped North Dakota farmers by giving away pure-bred livestock, especially bulls of the shorthorn breed. He would usually find a cooperating farmer who would use the bull well and become a model of modern farming for his or her neighbors. One of these farmers was Joanna Randolph Kelley who received a white shorthorn bull at her “White Farm” near Devils Lake. (See Document 3) Mrs. Kelley was famous around the world as a successful farmer. (See Image 13) 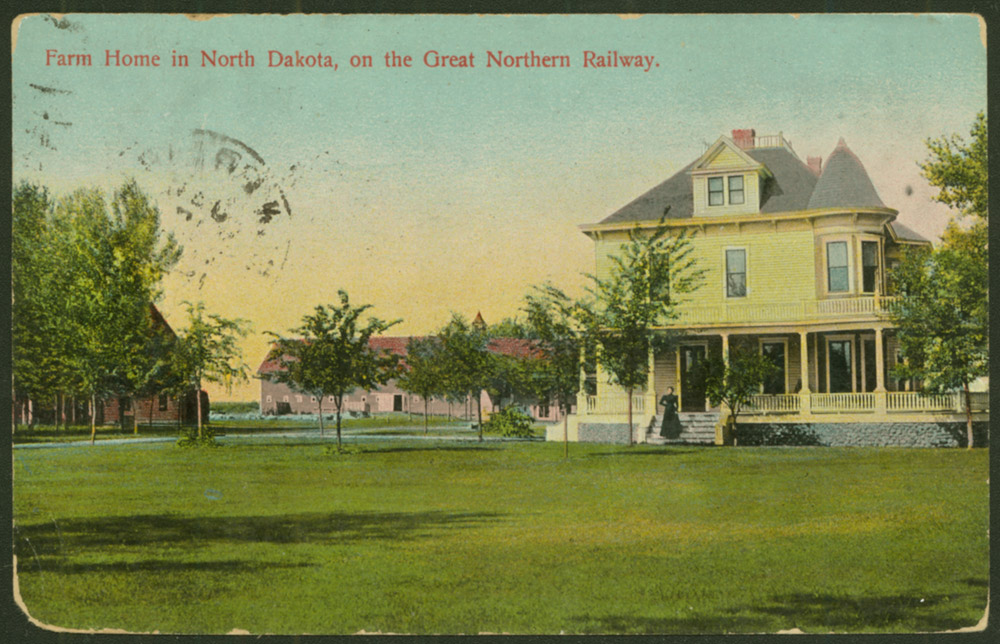 Image 13: In addition to promoting farms and businesses, the railroads promised that newcomers would live in fine homes. This 1910 Great Northern postcard picture shows a very well-built and attractive farm house along the GNRR line. SHSND B0795-10.

The Great Northern built many branch lines in North Dakota to connect small towns to the main line. (See Image 14)  James J. Hill’s branch lines caused people to start new farms in remote areas. Hill made sure those new farmers had a town and a grain elevator to bring their business to his railroad. When it was necessary, he reduced his freight rates to keep the farmers’ business. Sometimes farmers begged Hill to build a branch line into their area. Hill, however, only built where he thought the GNRR could make money. 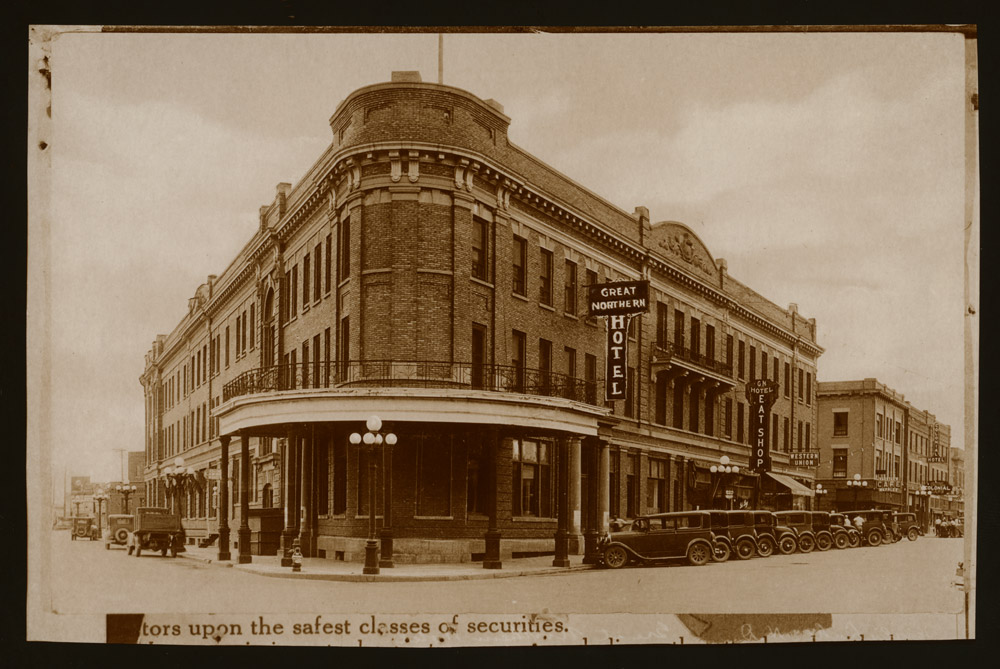 Image 14: The railroads promoted the towns and lands along the line. Prospective buyers of real estate might ride the Great Northern to Devils Lake, stay in an elegant and modern hotel such as this one, and perhaps decide to invest in land or a business in the region. SHSND A5916.

The GNRR, however, was not as successful at building towns as the Northern Pacific or the Soo Line. Many of its townsites were poorly chosen on land that was too wet or too close to another town. When the GNRR did build a town, it liked to name them for important North Dakota politicians. The GNRR town of Sarles was named for Governor Elmore Y. Sarles who was inaugurated in 1905. Hill also named a town for Senator Henry C. Hansbrough. When the company misspelled Hansbrough’s name, the town became known as Hansboro. Another town was named for Congressman Asle J. Gronna.

Hill’s railroad had 5,000 miles of track between St. Paul and Seattle by 1901. Hill, known to many of his friends as The Empire Builder, continued to build tracks in North Dakota for many more years.

Why is this important?  James J. Hill and the Great Northern Railroad were responsible for much of the development of farms and towns in the northern part of North Dakota. Though he did not have the political power of the Northern Pacific Railroad in North Dakota, Hill had a great deal of economic power in many small and large towns along his line. His support for better farming practices was second only to that of the North Dakota Agricultural College in Fargo.