In 1862, Congress passed the Pacific Railway Act which funded the building of the first transcontinental railroad through land grants and low-interest federal loans. In 1868, the Northern Pacific Railway (NPRR) began operation. Its tracks reached Moorhead, Minnesota, just across the Red River from Fargo in 1871.

The northern railroad route had long been anticipated. Maps of the Great Plains that were printed in the 1850s show a proposed route running from western Minnesota along the northern edge of the Missouri River. At that time, the land still belonged to several Indian tribes according to the Treaty of Fort Laramie of 1851. By 1873, the Treaty of Fort Laramie had been changed to allow for the trains to build through tribal lands. In 1873, the Army escorted railroad engineers from Fort Abraham Lincoln to the Yellowstone River so they could survey the route of the railroad. The tribes resisted the coming railroad, but did not succeed in stopping construction.

The NPRR crossed the Red River in 1872 and reached Bismarck in the summer of 1873. Upon completion of this stretch of tracks, the NPRR received a portion of its land grant. The company could now build towns and sell farm land between Fargo and Bismarck. However, at Bismarck, the tracks remained unfinished while the company untangled its financial problems. The Northern Pacific resumed construction in 1876. 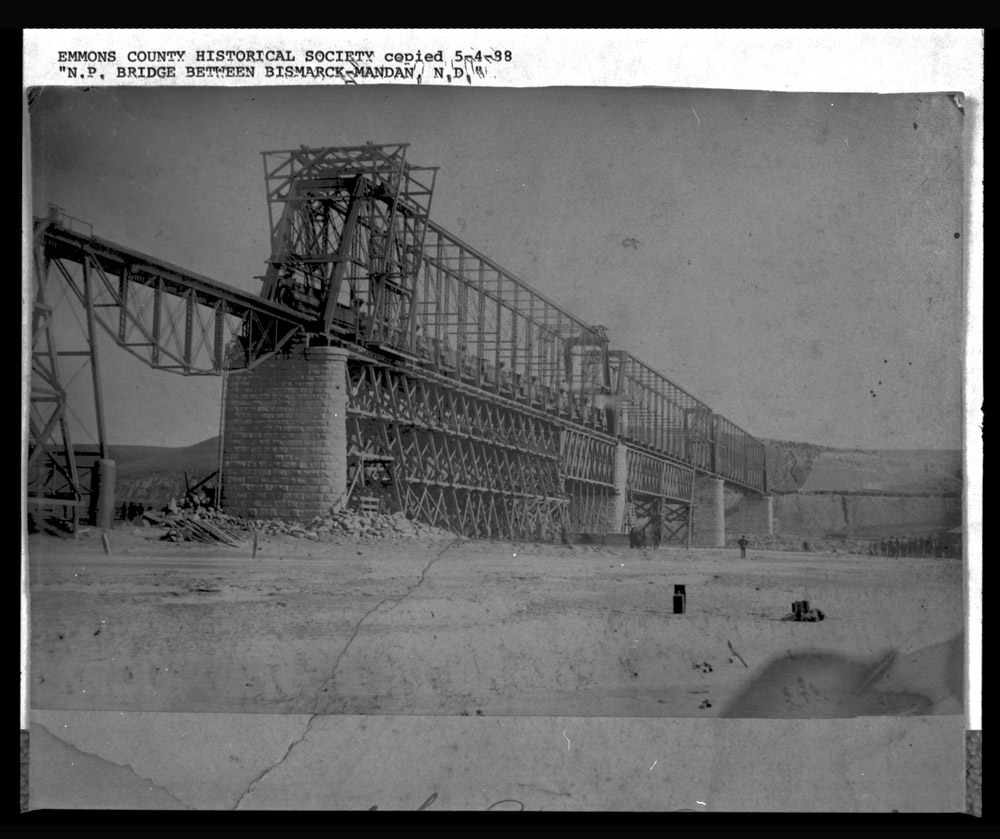 Image 4: The railroads had to span wide rivers such as the Missouri in this photo as well as deep valleys. Grades were built to level the ground surface as much as possible. SHSND 0281-0056. 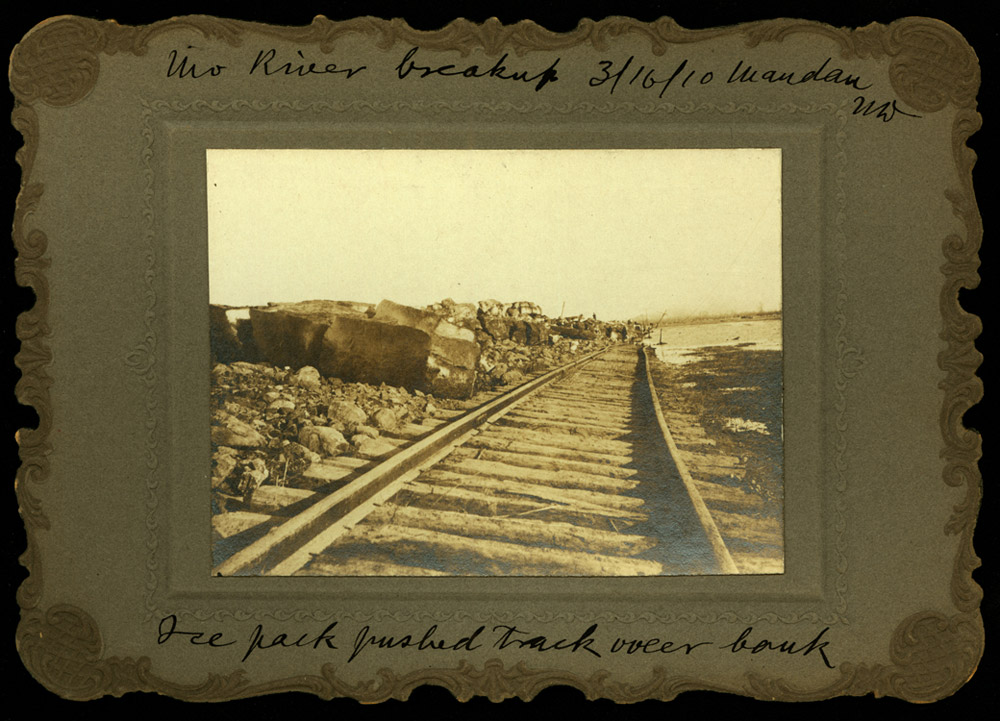 Image 5: Sometimes, the railroads found that the land was more powerful than the tracks and the trains. This photo shows how ice pushed up from the Missouri River at the end of the snowy and cold winter of 1910. The ice pack pushed the tracks off the bank where they had been built near the river. After workers removed the ice by hand, the tracks and the grade had to be repaired. SHSND A2474-6.

The railroad was a major factor in the growth of towns along the line. Fargo, Bismarck, Dickinson, and other towns grew along the tracks. The rails brought people and business to the towns. (See Image 6) Town lots rose in value. In Fargo, one city lot increased in value by 12.5 per cent in one day, from $200 to $225. The same lot was sold again five months later for $700, more than three times its first sale price. Land in towns where the railroad did not lay tracks was worth about $1.25 per acre. 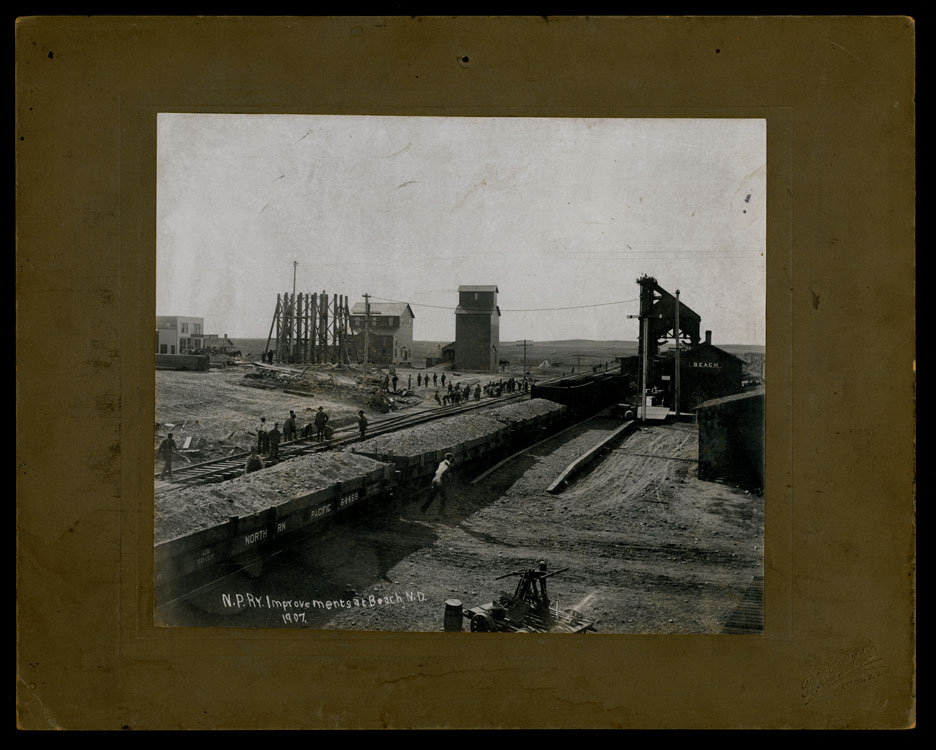 Image 6: The railroads built grain elevators, hotels, stables, and other buildings and businesses necessary to support train traffic. These structures were called “improvements.” The Northern Pacific Railway built a grain elevator at Beach in 1907. SHSND 2012-P-026-0001

Often speculators (people who buy land with the intention of selling it quickly for a profit) would begin to build a town where they thought the railroad would build tracks. One of these towns was called Mardell. It was located in eastern Griggs County (today Steele County.)  In 1882, speculators from Illinois platted (mapped lots and streets) the town and built a hotel to house newcomers. By the end of May, there were 12 buildings under construction. A grain elevator was begun in June. A farmer with land on the city limits was offered $1,000 for two acres. One resident opened a post office.

Then, the NPRR decided to move its branch line farther west. Cooperstown began to grow and Mardell failed. By 1885, the town was empty. The few buildings were taken elsewhere or broken up for other purposes.

The NPRR advertised its towns and lands, as well as federal land, in bulletins that were published in several different languages. The railroad company sent representatives to Germany, England, and other European nations. They wanted to attract good, hard-working farmers to northern Dakota Territory with promises of “free” land under the Homestead Act and railroad land from the NPRR’s federal grant lands. Their efforts, along with the advertising of Dakota Territory, and letters that immigrants wrote home, were very successful in bringing people to the land around the rail lines. (See Image 7) 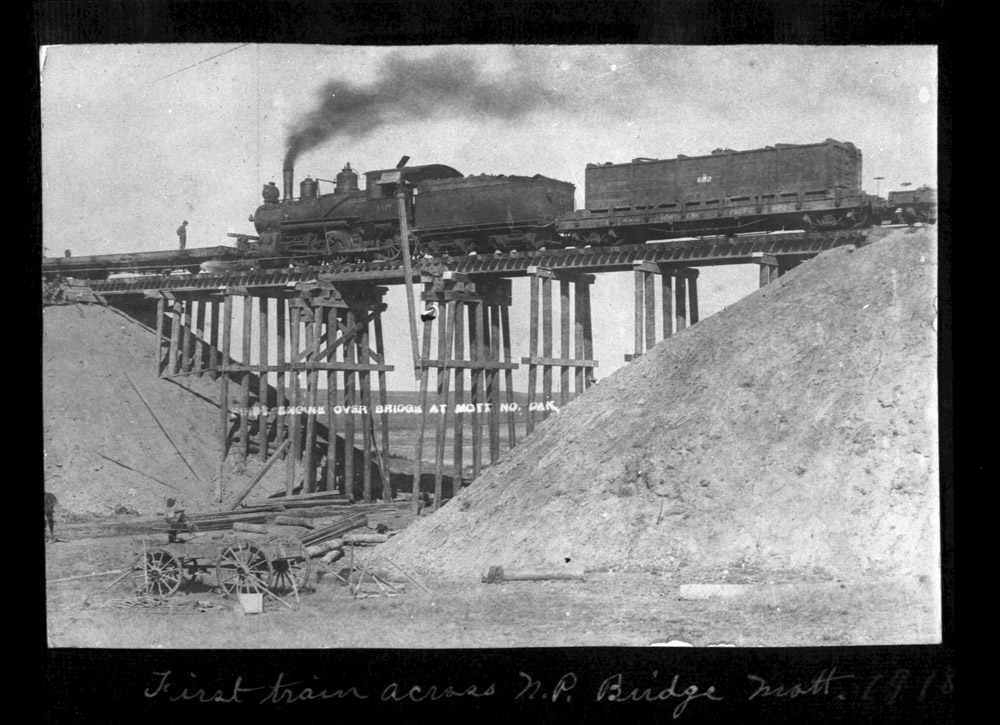 Image 7: All of the major railroads built spur lines or branch lines from the main track to small towns. This NPRR train is the first to cross the new bridge into Mott in 1918. SHSND 0001-053-01.

Immigrants from Europe and from eastern states used the railroad to send their household goods and farm machinery to their new home. It cost the immigrants about $100 to hire a whole railroad car from Chicago to Fargo. Once these immigrants were established on their farms, they shipped Hard Red Spring Wheat, cattle, cream, and eggs to St. Paul or Chicago.

Why is this important?  The Northern Pacific Railroad was one of the largest and most important railroads in the United States. Its financial success or failure influenced the entire economy of the United States. For this reason, the railroad had to succeed in building its tracks across the continent. The NPRR needed to bring people to northern Dakota Territory, and the people needed the railroad to ship their crops to market. Without the railroad, people who lived in North Dakota would have been very isolated.

However, the railroad was a powerful political force that brought the Army to Dakota Territory to control American Indian tribes and brought settlers to the edge of Indian reservations. The Northern Pacific controlled both the territorial and state legislatures for many years. Though farmers needed the NPRR, the high freight rates caused many farmers to complain about the railroad’s power.

The town of Sims was a railroad town. Sims was named for the Northern Pacific Railroad (NPRR) executive George Sims. It was located near Almont about 30 miles west of Mandan in Morton County. Sims had several economic functions in western Morton County. All of the town’s businesses were linked to the railroad.

Map 2: The Northern Pacific Railroad (upper greeen line) cut a line across North Dakota that was nearly straight. The line diverted south to Sims in order to get water and coal. With a railroad stop , Sims became an important shipping point for cattle west of Bismarck.

Sims was unusual in that it caused the rail line to divert from its westward path to the south. (See Map 2) The rail line moved south of its straight westward track out of Mandan to the place where Sims was located. Sims had coal and water which were necessary to keep steam engines running. The spring where the water emerged from the ground was dammed, and a pump was installed to move the water into a water tower for the trains.

The NPRR made Sims an important town. (See Image 8) Sims had coal mines, of course, but it also had a brickyard and cattle yards. Sims became an important shipping location for cattle. Because the railroad came to Sims for water and coal, the trains were also able to pick up freight at that point. 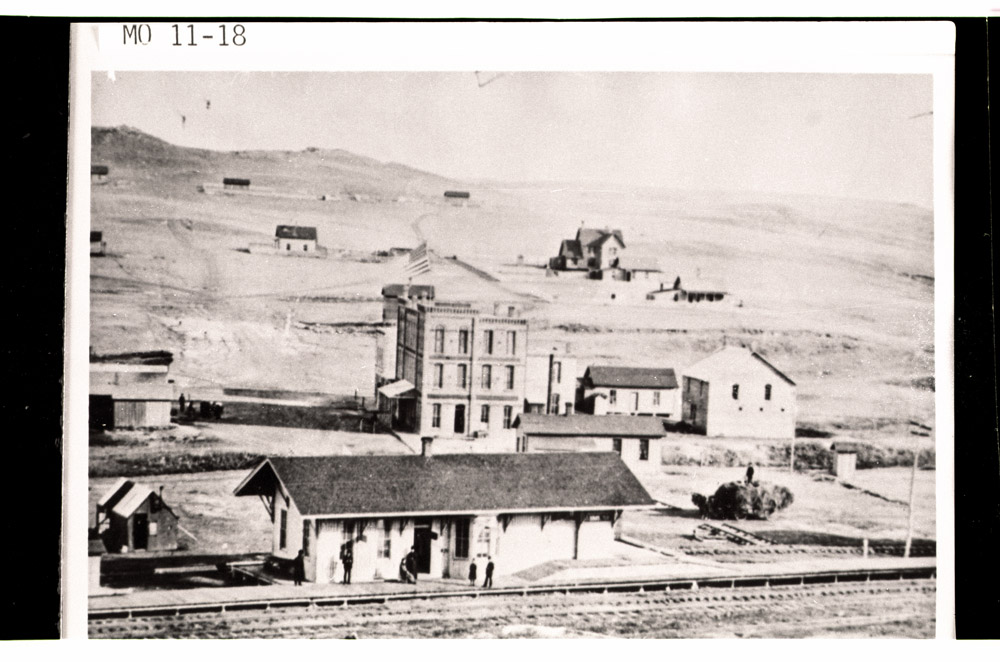 Image 8: Small towns like Sims grew up around the railroad, and served the railroad’s needs. Sims offered water and coal to fuel the steam engines on the Northern Pacific Railroad. Sims prospered from its association with the NPRR. The largest building in the photo is the hotel. SHSND 0032-MO-11-18.

Sims thrived on the railroad business. The town boomed (grew rapidly) in the 1880s. Brick homes and businesses formed the town. (See Image 9) A large hotel, the Oakes House, was built on Main Street. By 1883, Sims had a large brick school, two churches, a drug store, a real estate office, jewelry stores, three general stores, and seven saloons. The Sims brickyard, called the Carbon Pressed Brick and Lime Company, produced decorative brick, including 2,000,000 bricks for the territorial capitol building in 1883. 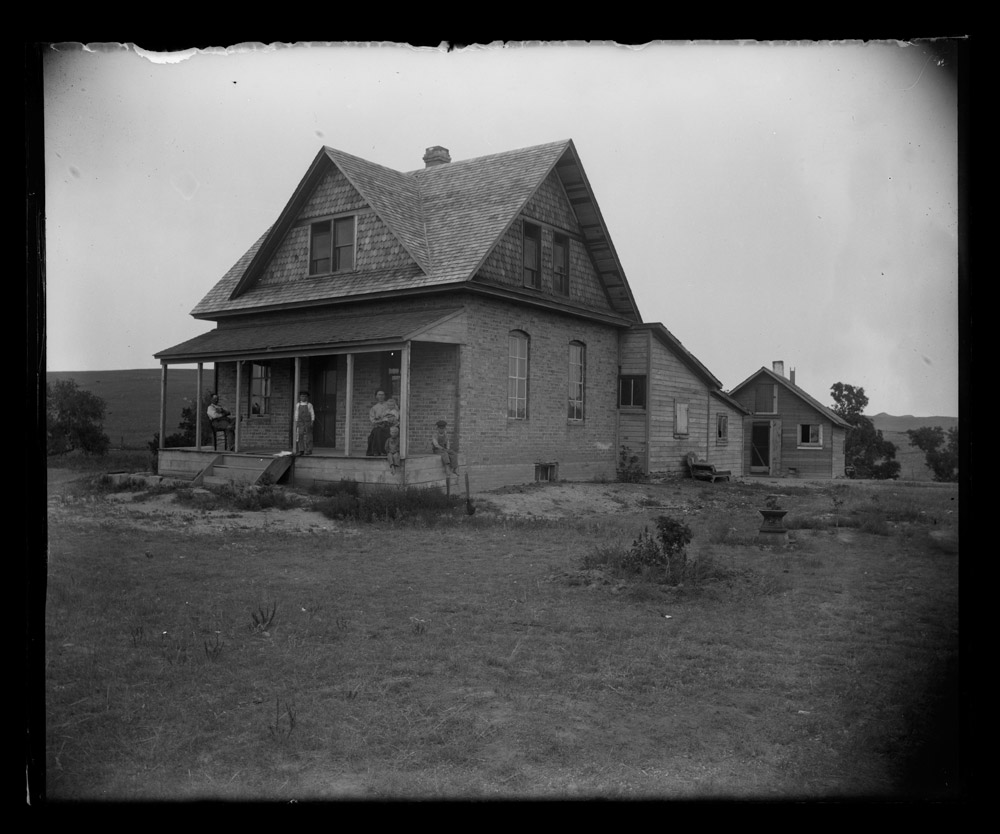 Image 9: The town of Sims prospered during its first thirty years. Jobs with the railroads, the brick factory, or the railroad gave workers a good income. Many homes, such as this one belonging to the Jacobson family, were built of local brick. SHSND 2012-P-041-0007.

In 1947, the NPRR abandoned the “rattlesnake cut” to Sims. Diesel trains no longer needed the coal and water that had brought the tracks to Sims. When the trains no longer ran, the homes and the few remaining businesses began to close. Today, you can attend church services in Sims and visit the site of the once thriving town that once came within one vote of being the county seat of Morton County.

Why is this important?  Sims was typical of many small towns that grew up to suit the railroad’s needs. Years later when diesel engines no longer needed coal or water, the little towns lost population. Today, Sims is gone except for a couple of historic buildings. Other towns faded as the railroads became less important for human and freight transportation.