Section 3: Lewis and Clark on the Upper Missouri

On September 24, 1804, Meriwether Lewis and William Clark, leaders of the Corps of Discovery, (See Image 4.) prepared for an important meeting as they navigated the Missouri River. They expected to meet with the Teton Dakotas the following day. (See Document 2.) Lewis and Clark expected trouble, but planned to follow their orders to conduct diplomacy with each tribe and encourage peaceful relations among tribes and between all tribes and the United States. 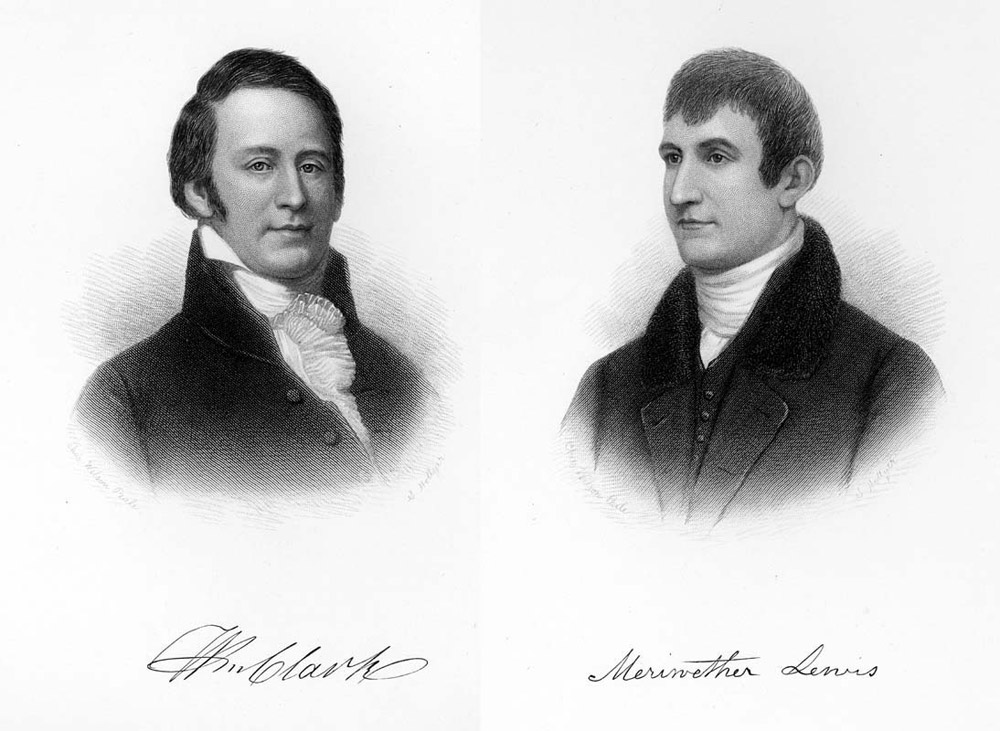 Image 4: Meriwether Lewis and William Clark were charged with the mission of promoting peace and trade with the tribes they met on their journey to the Pacific Ocean. Both men were skilled at diplomacy and military tactics. They were concerned about meeting the Brulés (Teton Dakotas) on their journey because they already knew that the Dakotas fiercely defended their lands and their interests. Though no shots were fired during their three-day visit, Lewis and Clark failed to impress the Brulés with their military might or their diplomacy. SHSND Lewis and Clark portraits.

William Clark recorded in his journal the preparations for meeting the Brulé Dakotas on their home ground. They chose the gifts that they would give to the Partisan and Black Buffalo. However, they also prepared for “action,” meaning armed conflict.

The theft of the horse was probably a good way for the Brulés to test the men of the Corps of Discovery. Clark responded wisely, by telling them that the horse that had been  stolen was supposed to be a gift to their chief.

Though Lewis and Clark were prepared for the meeting, it was a tense three days in which neither of the captains slept very much.

we prepared Some Clothes and a fiew meadels for the Chiefs of the Teton's band of Seaux which we expect to See to day at the next river, observe a Great Deel of Stone on the Sides of the hills on the S. S. we Saw one Hare to day,

prepared all things for action in Case of necessity, our Perogus went to the Island for the meet, Soon after the man on Shore run up the bank and reported that the Indians had Stolen the horse

we Soon after met 5 Inds. and ankered out Some distance & Spoke to them informed them we were friends, & wished to Continue So but were not afraid of any Indians, Some of their young men had taken the horse Sent by their Great father for ther Chief and we would not Speek to them untill the horse was returned to us again. Source: http://www.gutenberg.org/files/8419/8419-h/8419-h.htm

The Teton Dakotas had a well-earned reputation as fierce opponents. They had controlled the trade patterns of the Upper Missouri River country for many years. St. Louis merchants who had tried to contact tribes along the Missouri River were often turned back by the Tetons who wanted to keep their position as merchants to the tribes.

Most of the trade goods that the Dakotas controlled came through the Hudson’s Bay Company or the North West Company, both British fur trade companies. Once the United States purchased Louisiana, President Jefferson wanted all trade in furs and goods to go through the merchants and trading companies of St. Louis. Lewis and Clark intended to pave the way for new trade patterns centered on St. Louis.

Though the Corps of Discovery was a well-armed military expedition, Lewis, Clark, and President Jefferson knew that this small group of men was no match for the great Dakota nations. Lewis and Clark had to act as diplomats, but also had to be prepared to become warriors very quickly if necessary. 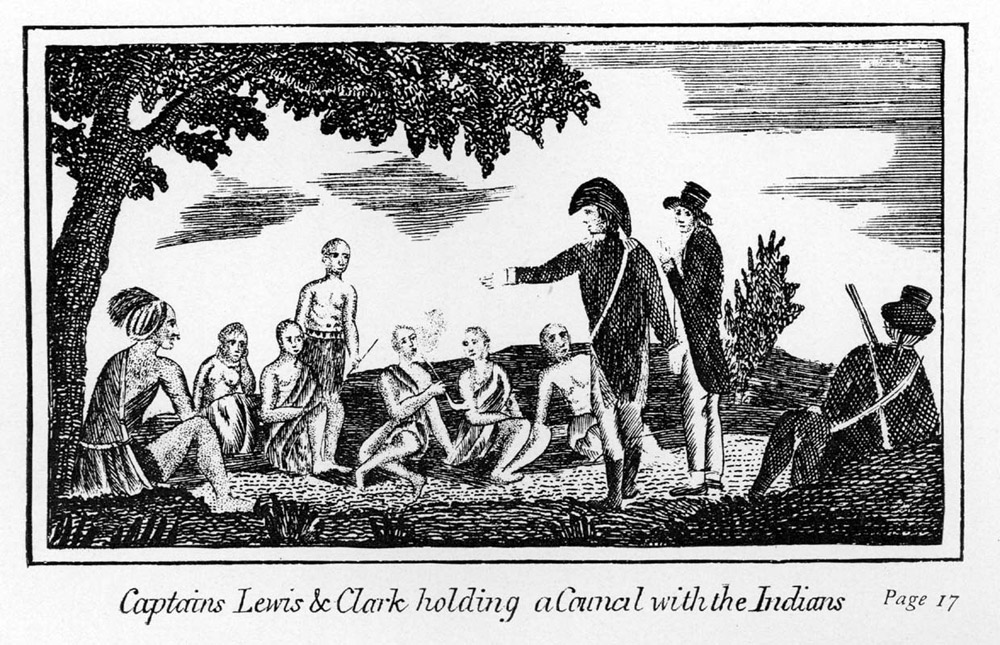 Image 5: Whenever Meriwether Lewis and William Clark met Indian tribes along their journey, they stopped to talk with them and offer gifts. They wanted to encourage peaceful tribal relations and trade with Americans at St. Louis. Each of these councils was conducted in a similar manner. They smoked tobacco (a ritual of friendship), made long speeches about peace and friendship, and presented gifts to one another. Though Lewis and Clark had visited the Brulé Dakotas in September 1804 to establish diplomatic relations, the results were not satisfactory. Lewis and Clark were allowed to proceed up the river, but the Brulé did not give up their control over trade in the region. SHSND Lewis and Clark holding council.

The Brulé tribe of the Teton Dakotas, under the leadership of Black Buffalo (Untongarabar) and the Partisan (Tortohongar) were determined to send the Corps of Discovery back down the river. Permitting the American soldiers to continue upriver to the Mandan villages would expose the Mandans and Hidatsas to alternative trade markets that might exclude the Tetons. If the Corps of Discovery continued when others had been turned back, it might appear as if the Dakotas had lost some of their power. 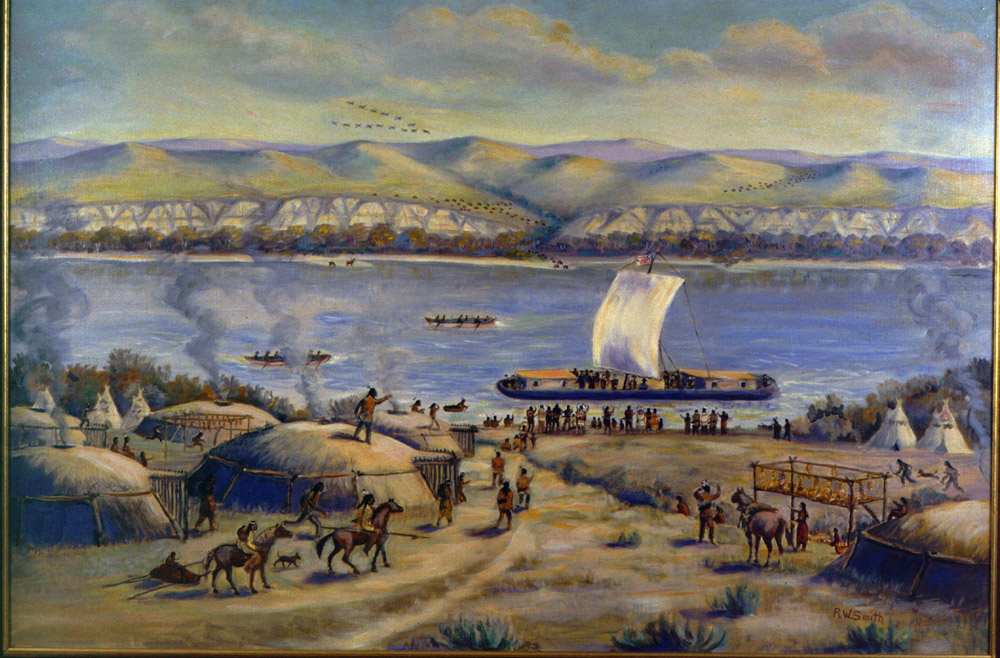 Image 6: On September 28, 1804, Lewis and Clark were finally able to safely leave the Brulé Dakota camp where they had unsuccessfully tried to negotiate peace with Black Buffalo and the Partisan. The Brulés had not wanted the expedition to visit the Mandans and Hidatsas farther upriver which might have weakened their control over trade systems. About one month after leaving the Brulé camp, the Corps of Discovery arrived at the Mandan and Hidatsa villages where they were welcomed. However, the Dakota’s control of trade in the region remained intact. SHSND Museum 11549.

Neither the Tetons nor the Americans were able to achieve their goals. Though the Brulés could have easily destroyed all the men of the expedition, they knew that the guns and cannons would also take a toll on their own people. Women and children of the village could be hurt. Since the Dakotas had a greater goal of protecting and providing for their families, Black Buffalo and the Partisan did not want to chance a deadly encounter.

Lewis and Clark continued their journey. (See Image 6.)  Their diplomacy and military power were convincing – at least for the time being. However, they did not succeed in making the Tetons more peaceful or in limiting their control of trade. A few years later, traders who tried to open the route north were turned back by the Teton Dakotas.

The next stop for the Corps of Discovery was the Mandan and Hidatsa villages where the men would spend the winter. Lewis and Clark spent some time that winter writing summaries of all that they had learned about the river, the landscape, and the people they had met so far. What they had learned about the Teton Dakotas was that they were a large and powerful nation. They described the Teton Dakotas as “the vilest miscreants of the savage race.” They recommended that the federal government force the Dakotas to “feel a dependence on [the government] for their supply of merchandise.”

Over the course of 100 years, the Teton Dakotas had built a huge trade empire that provided them with everything they needed. They had a comfortable life and could consider themselves wealthy. They were not about to tolerate any challenges to their economic system.

Lewis and Clark did not understand how sophisticated the Dakotas’ economy was. They thought it was a simple matter of switching from one source of trade goods to another. Their frustration with the Tetons led them to think of all the Dakota tribes as “savages” who needed to be punished by the federal government. President Jefferson knew that was impossible. The United States was too small and weak to conquer the Dakota nation. (See Document 3.)

For the next 60 years, both the Teton Dakotas and the United States government tried to assert power over the Great Plains. This conflict resulted in a number of treaties that failed and a number of battles that did not settle anything.

Document 3. Lewis and Clark on the Brulé Dakotas

During the winter of 1805, Meriwether Lewis and William Clark summarized the information they had gathered during the first part of their journey. Included in the summaries is a piece titled “Estimate of the Eastern Indians” which includes the following paragraph about the Brulé (or Bois Brulé) tribe of the Teton Dakotas and some other Teton tribes. In this “estimation,” the frustration felt by Lewis and Clark in their failure to secure a friendly relationship with the Tetons is very evident. Their language is as strong as one might find in an official government report. They leave the reader feeling that the government will have to march an army against the Tetons to force them to give up trade with Canadian trading companies. The final, lengthy sentence indicates how vast a territory the Teton Dakotas controlled.

Tetons Bois Brulé. Tetons Okandandas. Tetons Minnakineazzo. Tetons Sahone. These are the vilest miscreants of the savage race, and must ever remain the pirates of the Missouri, until such measures are pursued, by our government, as will make them feel a dependence on its will for their supply of merchandise. Unless these people are reduced to order, by coercive measures, I am ready to pronounce that the citizens of the United States can never enjoy but partially the advantages which the Missouri presents. Relying on a regular supply of merchandise, through the channel of the river St. Peters [River], they view with contempt the merchants of the Missouri, whom they never fail to plunder, when in their power. Persuasion or advice, with them, is viewed as supplication, and only tends to inspire them with contempt for those who offer either. The tameness with which the traders of the Missouri have heretofore submitted to their rapacity, has tended not a little to inspire them with contempt for the white persons who visit them, through that channel. A prevalent idea among them, and one which they make the rule of their conduct, is, that the more [badly] they treat the traders the greater quantity of merchandise they will bring them, and that they will thus obtain the articles they wish on better terms; they have endeavored to inspire the Ricaras with similar sentiments, but, happily, without any considerable effect. . . . I doubt whether these people can ever be induced to become stationary; their trade might be made valuable if they were reduced to order. They claim jointly with the other bands of the Sioux, all the country lying within the following limits, viz. beginning at the confluence of the river [DesMoines] and Mississippi, thence up the west side of the Mississippi to the mouth of the St. Peters river, thence on both sides of the Mississippi to the mouth of Crow-wing river, and upwards with that stream, including the waters of the upper part of the same; thence to include the waters of the upper portion of Red river, of Lake Winnipeg, and down the same nearly to Pembenar river, thence a south westerly course to intersect the Missouri at or near the Mandans, and with that stream downwards to the entrance of the Warrecunne creek, thence passing the Missouri it goes to include the lower portion of the river Chyenne, all the waters of White river and river Teton, includes the lower portion of the river Quicurre, and returns to the Missouri, and with that stream downwards to the mouth of Waddipon river, and thence eastwardly to intersect the Mississippi at the beginning. Source: http://www.gutenberg.org/files/8419/8419-h/8419-h.htm

Why is this important?  Many historians have described the Indians of the Great Plains as living simple lives of hunting and gathering. Many scholars thought that armed conflict was to protect hunting grounds or for revenge. However, if historians begin their research with the idea that Indians were simple savages, they cannot understand the complex and sophisticated economic and political systems that Indian tribes actually had.

Lewis and Clark, too, had the idea that “savages” could be forced to accept the will of the federal government through military force or through gifts. Because they misunderstood the power and extensive economic empire of the Tetons, they were unsuccessful in accomplishing their goals.