Maximilian zu Wied-Neuwied (1782–1867) was a prince of a small Prussian (German) principality. Brilliant and scholarly, he rejected a prince’s usual occupation as an Army officer. He chose instead to study and pursue science. 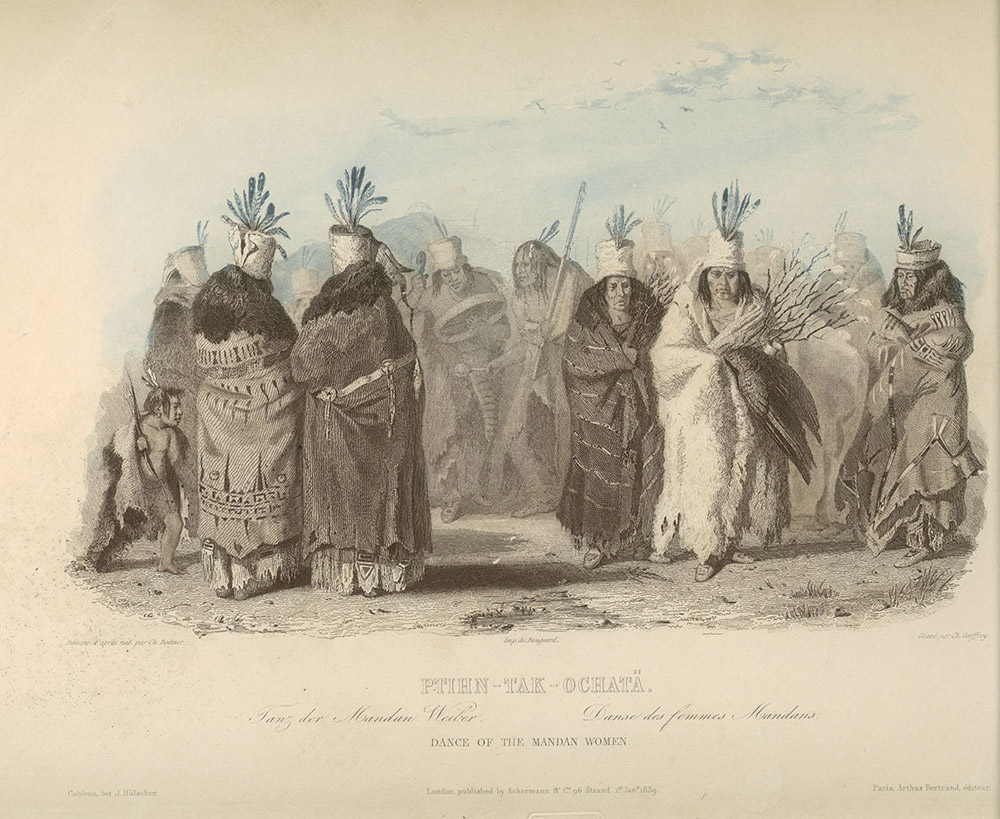 Image 7: SHSND 2608. Karl Bodmer was a Swiss artist who traveled with Prince Maximilian up the Missouri River in 1833. His drawings and paintings of people and scenes captured the life and customs of the Mandans. The dance of the Mandan women’s White Buffalo Calf Society is an example of how carefully Bodmer preserved Mandan culture. SHSND Museum Collection 2608

As a child, Maximilian was interested in natural history. He studied science in college and was determined to add to the scientific knowledge of the world. After a few years in the Army, he went to Brazil in 1815. He spent two years there studying plants, animals, and the native peoples of Brazil. He published a book about his journey and discoveries along with a book of drawings he made while in the field. The book gave him a reputation as a solid scientist and explorer.

By 1831, Maximilian was planning a lengthy tour of North America. He arrived in Boston in July, 1832. He brought with him an artist, Karl Bodmer of Switzerland, who was to record the images of landscapes, animals, and people they encountered on this long journey. (See Image 7.) Bodmer’s paintings, especially those of the Indians they met, are famous for their artistic qualities and for preserving images of the American Indians in the 1830s. (See Image 8.) 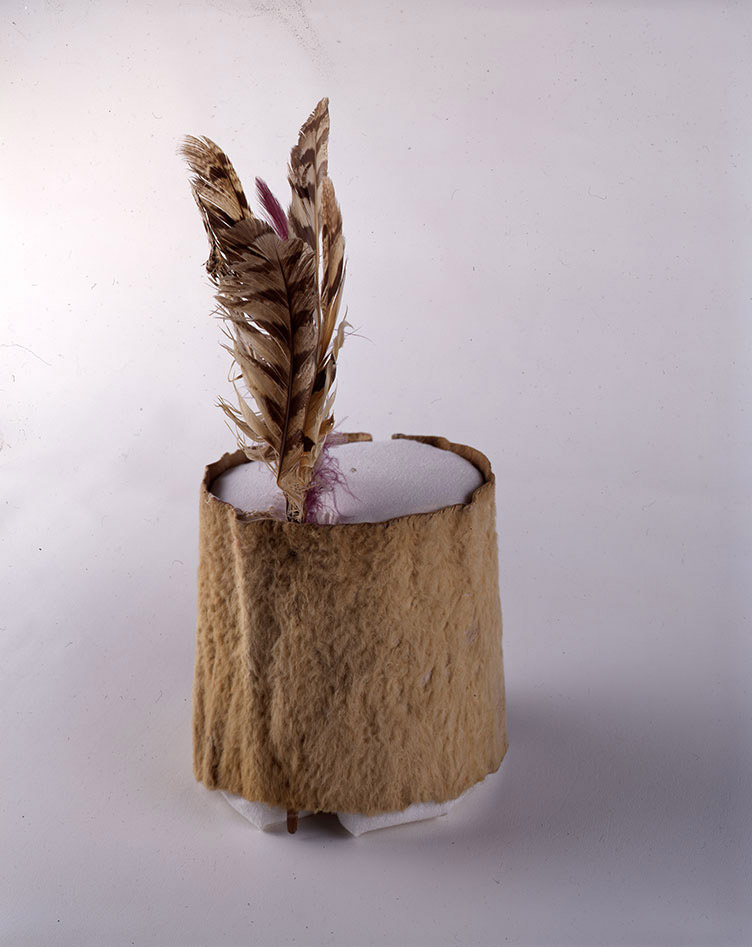 Image 8: 0585-4. This headdress was donated to the State Historical Society of North Dakota in 1915 by Charles Hoffman who lived on the Fort Berthold Indian Reservation. This headdress matches the style of headdress worn by the women dancers in Bodmer’s painting of the Mandan White Buffalo Calf Society (see Image 7). SHSND Museum collection 00585.

In traveling through the United States and its newer territories, Maximilian acted as a scientist. He made detailed notes about everything he saw and experienced. He was unafraid of meeting people of different cultures and learning more about them. Maximilian met the Indians of the northern Great Plains with far less prejudice than did most American explorers.

In the spring of 1833, Maximilian and Bodmer set out for the American West on “The Yellowstone,” a steamboat that was traveling up the Missouri to Fort Union. They traveled in the company of fur traders.

In mid-June, the boat reached the Mandan and Hidatsa (Minitaree) villages along the Missouri River. Maximilian stayed only a day or two, but returned later to spend the winter among the Mandans and Hidatsas. When Maximilian returned, the American Fur Company built a house for him at Fort Clark. During the winter, Maximilian took advantage of many opportunities to attend village dances and ceremonies and to draw pictures of tools, ceremonial objects, and customs. Bodmer made many paintings (now very famous) during the winter months.

During the winter at Fort Clark, Maximilian came down with scurvy, a potentially deadly disease caused by lack of Vitamin C in the diet. (Vitamin C can only be obtained by eating vegetables which were hard to find in winter months.) With his legs swollen and bleeding internally, someone finally recognized that Maximilian’s ailment was scurvy which could be cured by eating the small wild onions that popped up on the prairie early in the spring.

Maximilian returned to his principality in 1834. A fire on the boat destroyed many of the objects and specimens he had collected on the Missouri River. Once back in Germany, Maximilian organized his notes into another book titled Travels in the Interior of North America, 1832 to 1834. The book contained a great deal of information about the animals, plants, and landscapes of the American West. Most importantly, though, Maximilian made careful notes about the lives, ceremonies, and customs of the Mandans and Hidatsas.

Maximilian, Bodmer, and their servant Dreidoppel, carefully observed and recorded everything they experienced on that one June day at Fort Clark. (See Document 5.) Maximilian met the great chief, Four Bears (Mato Tope) and several other people. Maximilian watched with delight the crowd that was watching him.  He carefully described the Mandans and how they were dressed.

On the 19th June [1833], . . . All the inhabitants, in their buffalo dresses, were collected on the bank, and some had taken their station on the tops of their huts to have a better view: the whole prairie was covered with people, Indians on horseback, and horses grazing. In the low willow thickets on the bank, the brown, naked children were running about; all the men had fans of eagles' feathers in their hands. The village was surrounded with a fence of palisades. . . .There were high poles near the village, on which skins and other things were hung, as offerings to the lord of life, or the sun, and numerous stages for the dead were scattered about the prairie. . . .Mato-Topé (the four bears), the eminent Mandan chief, whom I have before mentioned, and Cháratá-Numákshi (the chief of the wolves), were also present; and I purchased from the former his painted buffalo dress, which had hitherto been his medicine (i.e. charm), which he highly valued as a souvenir of his brother, who had been shot by the enemy. Our cookery pleased them much; they were fond of coffee, and sugar was a great delicacy; but they cannot make maple sugar like the Indians in the woody country, because the trees are neither numerous nor strong enough to produce this article. [Page 357-358]

The south bank of the river was now animated by a crowd of Indians, both on foot and on horseback; they were the Manitaries, [Hidatsas] who had flocked from their three villages to see the steamer and to welcome us. The appearance of this vessel of the [American Fur] Company, which comes up, once in two years, to the Yellow Stone River, is an event of the greatest importance to the Indians; they then come from considerable distances to see this hissing machine, which they look upon as one of the most wonderful medicines (charms) of the white men. . . . We already saw above a hundred of them, with many dogs, some of which drew sledges, and others, wooden boards fastened to their backs, and the ends trailing on the ground, to which the baggage was attached with leather straps.

The most attractive sight which we had yet met with upon this voyage, now presented itself to our view. The steamboat lay to close to the willow thicket, and we saw, immediately before us, the numerous, motley, gaily painted, and variously ornamented crowd of the most elegant Indians on the whole course of the Missouri. The handsomest and most robust persons, of both sexes and all ages, in highly original, graceful, and characteristic costumes, appeared, thronged together, to our astonished eye; and there was, all at once, so much to see and to observe, that we anxiously profited by every moment to catch only the main features of this unique picture. The Manitaries are, in fact, the tallest and best formed Indians on the Missouri. . . .Their faces were, in general, painted red, in which the North Americans agree with the Brazilians, and many other South Americans; their long hair hung in broad flat braids down their backs; on the side of each eye, they had hanging, from the forehead, a string of white and blue beads, alternating with tooth shells, and their heads were adorned with feathers, stuck in the hair. [Page 359]

The expression of their remarkable countenances, as they gazed at us, was . . . in some . . . cold and disdainful; in others, intense curiosity; in others, again, good-nature. . . .The upper parts of their bodies were, in general, naked, and the fine brown skin of their arms adorned with broad, bright bracelets of a white metal. In their hands they carried their musket, bow and battle-axe; their quivers, of otter skin, elegantly decorated, were slung over their backs; their leggins were trimmed with tufts of the hair of the enemies whom they had killed, with dyed horse-hair of different colors, and with a profusion of leather fringe, and beautifully embroidered with stripes of dyed porcupine quills, or glass beads, of the most brilliant colors. These handsome, robust men, showing their remarkably fine white teeth as they smiled, gave free expression to their feelings; and the unnatural and ugly fashions . . . of the white people, probably afforded ample matter for satirical observations, for which these children of nature have a peculiar turn. All these Indians were dressed in their very finest clothes, and they completely attained their object; for they made, at least upon us strangers, a very lively impression. Many of them were distinguished by wearing leather shirts, of exquisite workmanship, which they obtain by barter from the Crows. Several tall, athletic men were on horseback, and managed their horses, which were frightened by the noise of the steam-boats, with an ease which afforded us pleasure. Urging them with their short whips in the manner of the Cossacks, with the bridle fastened to the lower jaw, they, at length, pushed the light, spirited animals through the willow thicket, till they reached the river, where these fine bold horsemen, resembling the Circassians [native people of eastern Europe], with their red-painted countenances, were regarded with great admiration. Many of them wore the large valuable necklace, made of long bears' claws, and their handsomely-painted buffalo robe was fastened round the waist by a girdle. In general they had no stirrups, but sat very firmly on the naked backs of the horses, and several rode on a saddle. . . . Among the young women we observed some who were very pretty, the white of whose sparkling hazel eyes formed a striking contrast with the vermilion faces. [page 360]

Why is this important?  Four years after Maximilian spent the winter among the Mandans and Hidatsas, smallpox spread through the villages and nearly destroyed the entire Mandan culture. Maximilian’s records of his visit remind us that the people of this great tribe once welcomed all sorts of travelers to their prosperous villages.