David Thompson (David Thompson - Journal) has been called “the world’s greatest land geographer.” Although most of his exploration was in Canada, he brought an expedition into North Dakota in the middle of winter to visit the Mandans.

Thompson was born in 1770 in England. He grew up in poverty and was educated at a school for disadvantaged children. His academic ability helped him enter a mathematical school where he learned navigation skills. In 1784, he began a seven-year apprenticeship with the Hudson’s Bay Company. An apprenticeship allowed him to further his education and develop his navigational skills. During the apprenticeship, the company provided him with food and clothing. He served as a clerk at first, but after suffering a severely broken leg, he began studying with the Hudson’s Bay Company surveyor. It took two years for his leg to heal; his superiors thought he might not survive. While studying navigation, he damaged his eyes and lost the sight in one eye.

In 1790, the Hudson’s Bay Company gave Thompson a set of surveying tools as payment for his apprenticeship. He soon made his first navigational measurement which made a very good impression on the company surveyor, Philip Turnor. Turnor recommended Thompson for a position as a surveyor and map-maker for Hudson’s Bay Company. 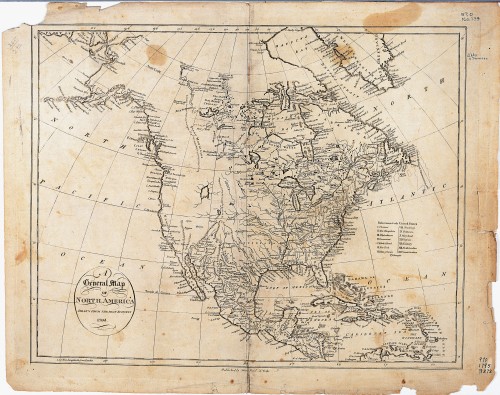 Map 3: When David Thompson entered North Dakota in 1797, the official maps looked very much like this one which was made in 1795. Look for Lake Winnipeg to find the mouth of the Red River. Thompson’s map may have been similar to this one, but he also had gathered a great deal of information from Indian trading partners and other fur traders. This map is very inaccurate. Thompson’s surveys of the region helped cartographers to create more accurate maps. SHSND 970-03 R353g 1795.

The instruments surveyors used in the 1790s required a skilled operator to take sightings of the position of the sun, the moon, and the stars in relation to a horizon. Air temperature often affected the instruments which complicated the task. The measurements had to be taken at exact times of the day, a factor that was often difficult to determine. However, Thompson was considered to be one of the best surveyors working for the company.

In 1797, Thompson became dissatisfied with the Hudson’s Bay Company. He left the company to join its competitor, the North West Company. His first task for the North West Company was to identify sites for the company trading posts that might be located south of the 49th parallel. The United States and Great Britain had agreed to discuss the boundary line. Though the boundary had not yet been officially decided, most diplomats believed it would be on the 49th parallel. (See Map 3.) 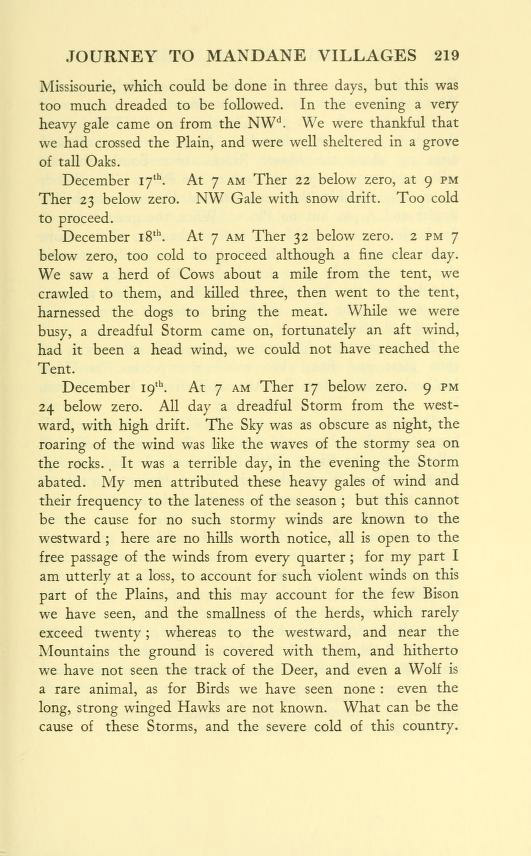 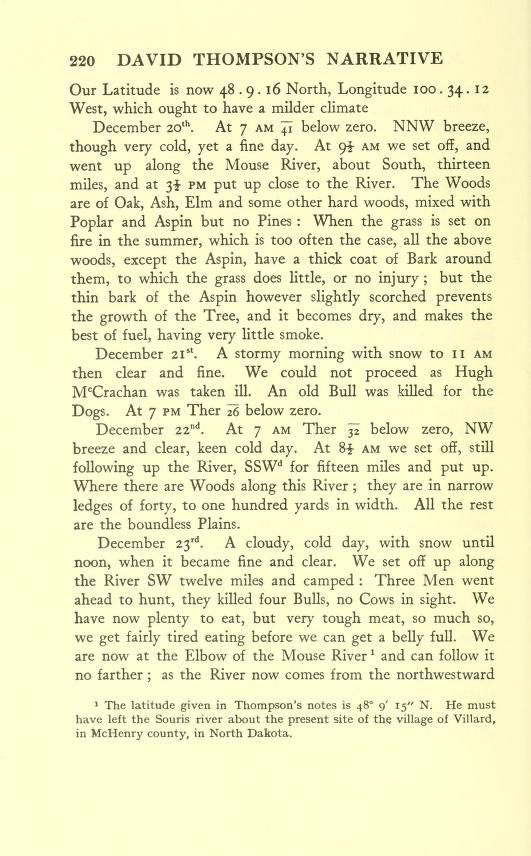 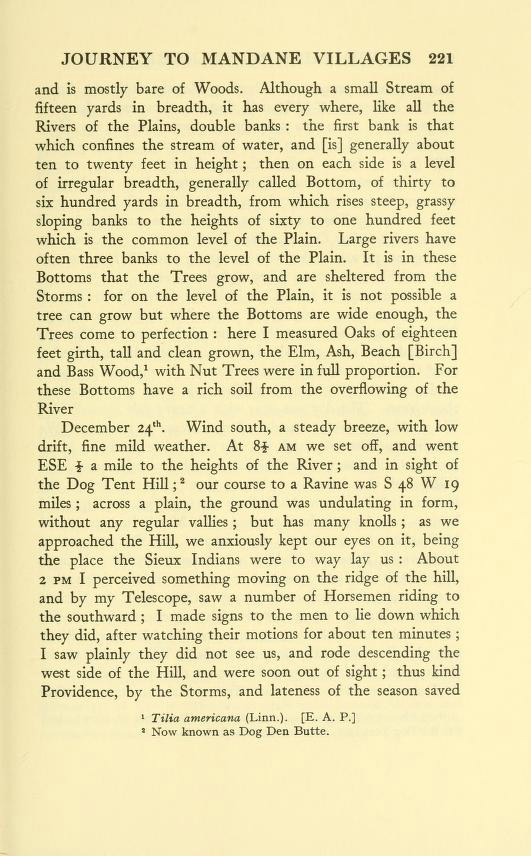 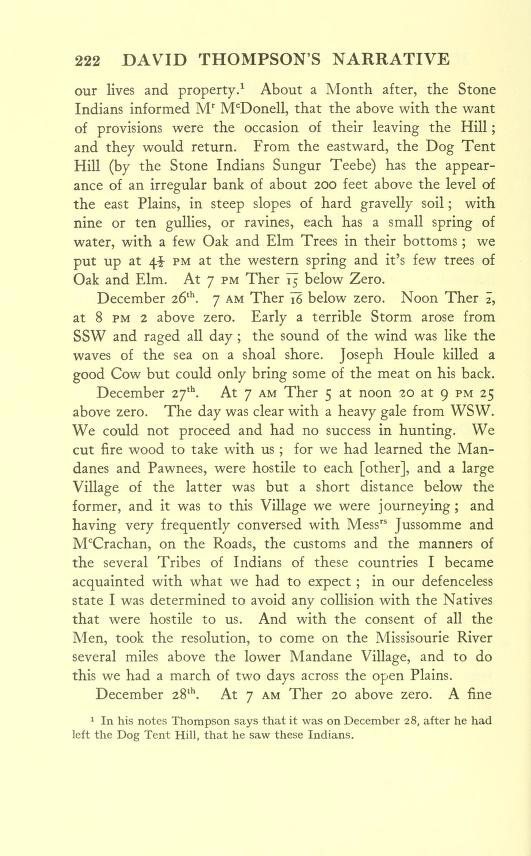 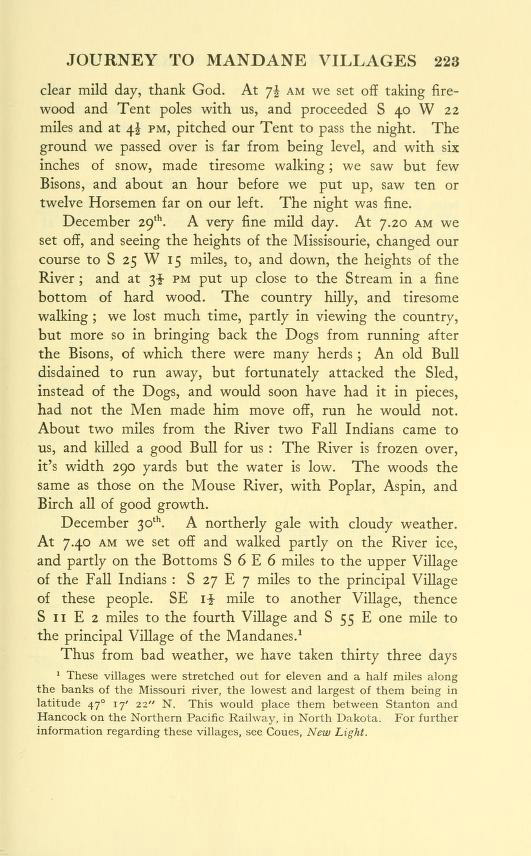 Once Thompson had completed that journey, he headed south to the Mandan Villages. He wanted to map the location of these villages which had already proven important to traders and travelers on the northern Great Plains. Lewis and Clark would not arrive at the Mandan and Hidatsa villages for another six years.

David Thompson spent the next several years surveying the Lake Superior region and working as a trader. However, in 1807, the company sent him west, over the Rocky Mountains to the Columbia River. After his return from this great journey in 1811, he retired from the company and settled in Montreal. He spent the rest of his life preparing maps of the region he surveyed and raising his family. Thompson died in 1857.

Thompson kept a journal during the days he spent traveling from the Mouse (Souris) River to the Mandan Villages. (See Document 4.) It was bitterly cold and windy. Thompson and a few of the men had horses, but most of the goods were placed on sleds drawn by a dog team. Bison were scarce, and Thompson complained about having to eat the meat of tough, old, bison bulls. In addition, the small group of men had to avoid conflict with Indians. The explorers were not armed well enough to defend themselves.

Thompson’s group arrived at the Mandan villages on December 30, 1797. While there, Thompson tried to convince the Mandans to travel to Manitoba to trade with the North West Company. The Mandans wisely refused to leave the area they controlled. Thompson took advantage of his visit to record a short vocabulary (375 words) of the Mandan language. Thompson remained in the Mandan villages until January 10, 1798, when he began a return journey to the nearest North West Company house in Manitoba.

Why is this important? David Thompson was the first surveyor and map-maker to accurately locate the Mandan villages. Though the villages had appeared on maps previous to his visit, the exact location (by latitude and longitude) were unknown to the fur traders. The big fur companies wanted to conduct business with the Mandans because they would have furs to trade. In addition, the Mandans had extremely important supplies of corn and other vegetables which might have reduced the company’s expense in transporting food supplies from Montreal.