Young people’s organizations multiplied during the first half of the twentieth century as the nation experienced economic troubles and international threats. Clubs for youth addressed these issues directly and prepared boys and girls to become responsible adults with strong leadership and vocational skills.

In North Dakota, many young people joined school-centered clubs such as Young Citizens League or Future Farmers of America. Others joined after-school clubs such as 4-H. These three organizations were particularly important in the small towns and agricultural communities of North Dakota. Though young boys and girls had important roles on their parents’ farms, many parents felt that participation in youth groups was an important part of community life and a good way for children to develop character and life skills.

The Young Citizens League, or YCL, was introduced to North Dakota elementary schools in 1927. The idea was born in South Dakota in 1912 and became very popular in that state. The organization was supported by many of the county school superintendents. (See Document 1.) 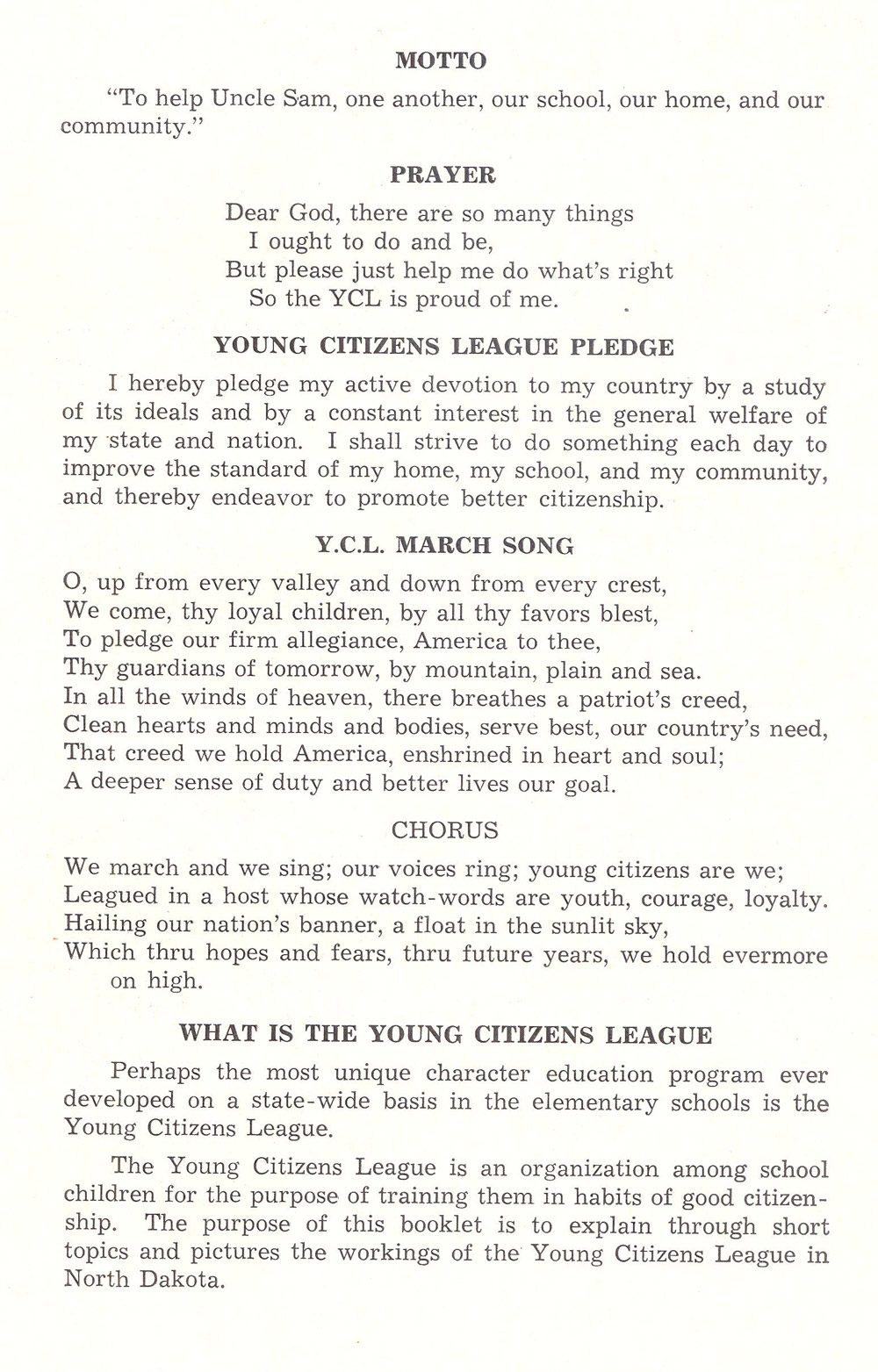 Document 1:  Each year the Young Citizens League published a booklet for chapter leaders. The motto, pledge, and song describe the organization’s focus on citizenship. SHSND 372.832. Yo83 1950. 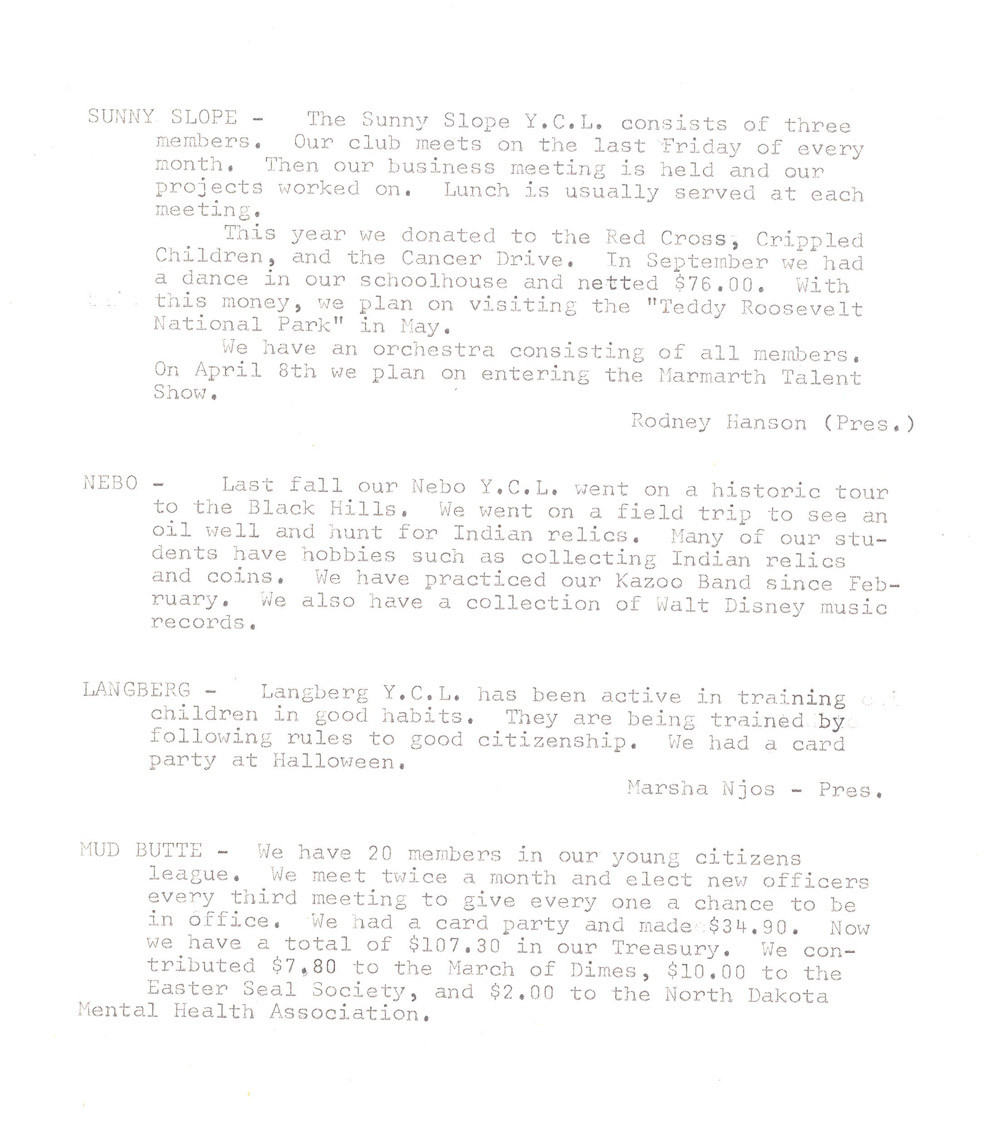 Document 2: Bowman County chapters of the Young Citizens League reported on their activities at the county convention. Chapter members raised money for activities by sponsoring community events such as the dance at the tiny Sunny Slope school. The students planned trips with a focus on state or historic sites. They also raised money for charities and elected officers. SHSND Mss 10528 Box 1.

In some ways, YCL was similar to 4-H clubs. The students had projects and attended club meetings. (See Document 2.)  However, YCL was closely associated with the schools, and teachers supervised chapter meetings. In addition, the emphasis in YCL was on citizenship while the emphasis in 4-H was agriculture and homemaking.

The purpose of YCL was to teach children citizenship and to encourage them to be engaged in the community. Each chapter elected officers frequently (as often as every two weeks) so that each child had a chance to participate in governance. The members practiced singing and pursued hobbies. Each year, the state organization suggested activities. Chapters reported on their events and projects at the county conventions. (See Document 3.) 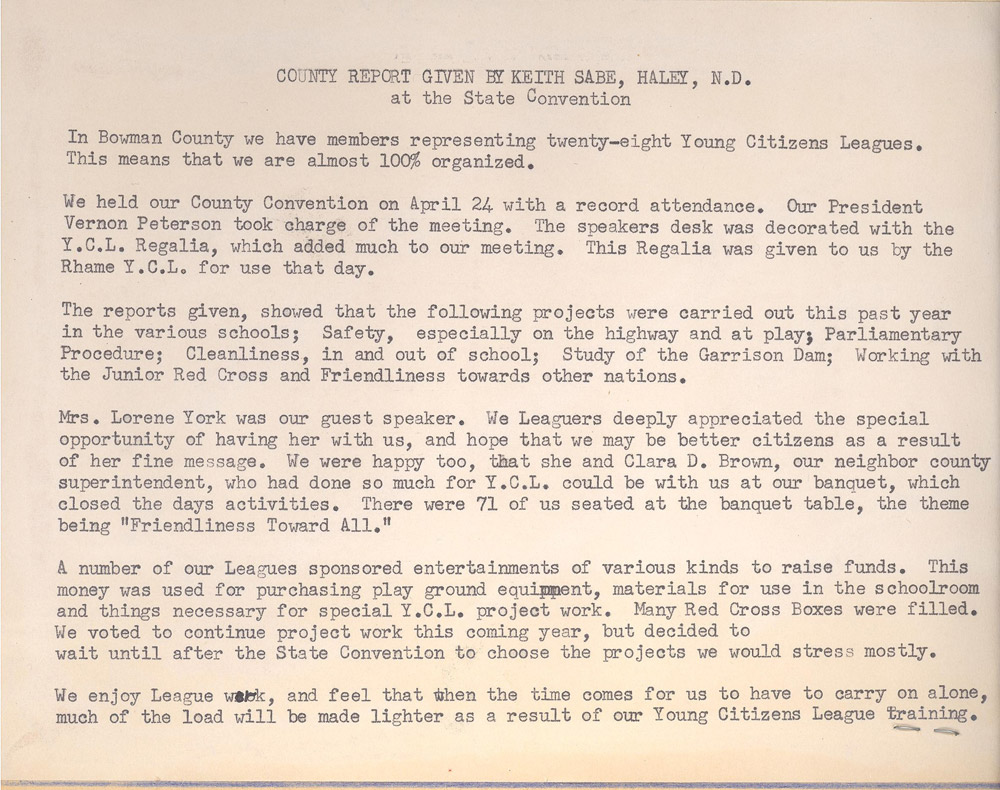 Document 3: The report of the Bowman County convention to the 1971 state YCL convention indicates widespread participation among grade school students. Seventy-one students met at the county convention on April 24, 1948. One of the projects was learning more about Garrison Dam which was being built at that time. SHSND Mss 10528 Scrapbook 191947-1956. 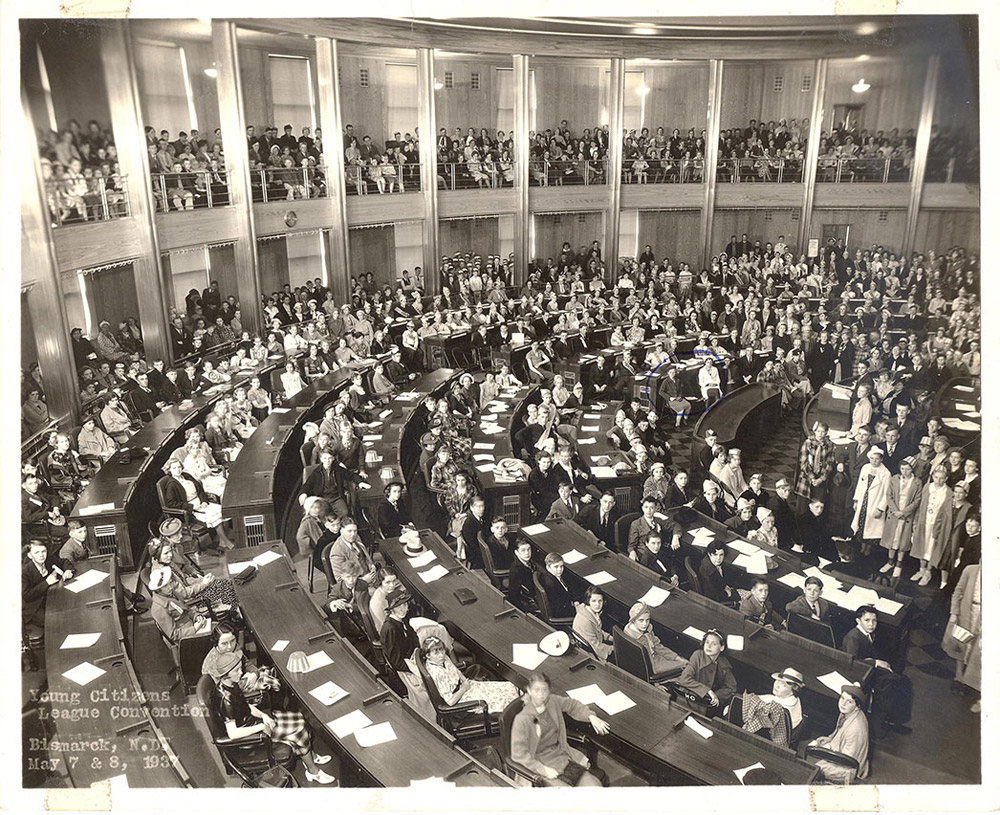 Image 1: Students attending the 1937 state convention of the Young Citizens League filled the House of Representatives chamber in the state capitol. At the convention, the students elected officers and presented reports on the activities of the county chapters. SHSND Mss 10529 Box 1 p0016 Slope County 1934-1954.

Beginning in 1930, the YCL held a state convention in Bismarck at the state Capitol. (See Image 1.) At the convention, the students displayed their work and elected state officers. (See Document 4.) They toured the Capitol, the governor’s mansion, the state prison, and Fort Abraham Lincoln State Park. Some chapters took the students on trips to the Peace Garden. 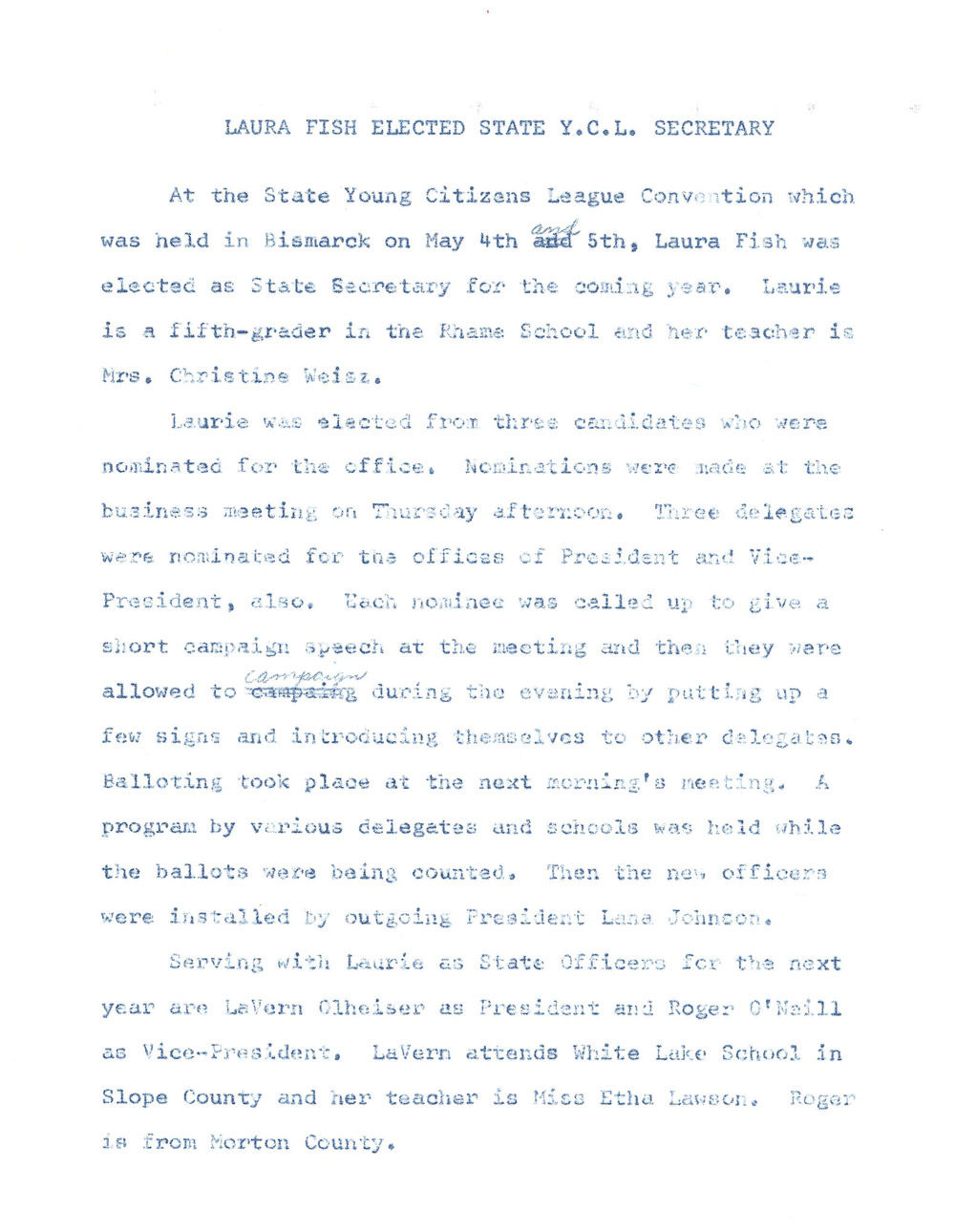 Document 4: When 5th grader Laurie Fish of Rhame was elected State Secretary of the Young Citizens League in 1972, local newspapers carried this story. The YCL had an important role in communities. The members raised money for various charities by sponsoring card parties and dances. In return, communities supported the activities of YCL chapters by attending YCL events and reporting on these events in the newspapers. SHSND Mss 10528 Box 1.

By 1950, there were 2,500 YCL chapters in North Dakota with a total enrollment of 35,000 students. State-sponsored activities included planting elm trees on school grounds, studying North Dakota’s birds and flowers, fund drives for charities such as the Junior Red Cross, and studying local and state history. These activities were designed to develop character, responsibility, and an understanding of government.

School consolidation and the closing of small rural schools reduced the membership of YCL. Students in larger schools had more activities and sports to join.  By 1980, few schools had YCL chapters. The final state convention was held in 1984.

Why is this important? Dr. Wemett brought the YCL to North Dakota during a period of national concern about the future of the United States. As a result of World War I, Americans viewed the world differently. The horrors of the war and the communist revolution in Russia offered a frightening vision of what might happen if we did not cherish democracy and teach our children the ways of a democratic nation. The Young Citizens League offered a defense of democracy as children learned more about how our government works.

The Young Citizens League benefitted not only the nation and the state, but also had a good influence on members. Many children who participated in YCL grew up to be responsible adults actively engaged in community affairs.