Near the end of the 19th century, the migration of people from rural homes and farms to cities raised concern about the future of agriculture. In 1908, President Theodore Roosevelt convened a conference to discuss the problem and identify solutions. The Country Life Movement, under the leadership of Liberty Hyde Bailey, continued the discussion and proposed different ways of making farm life more appealing to men, women, and children.

In 1914, the national discussion finally resulted in the passage of the Smith-Lever Act. With Smith-Lever, Congress provided for the establishment of the Cooperative Extension Service which drew on the resources of federal, state, and county agencies to support farm life and agriculture. 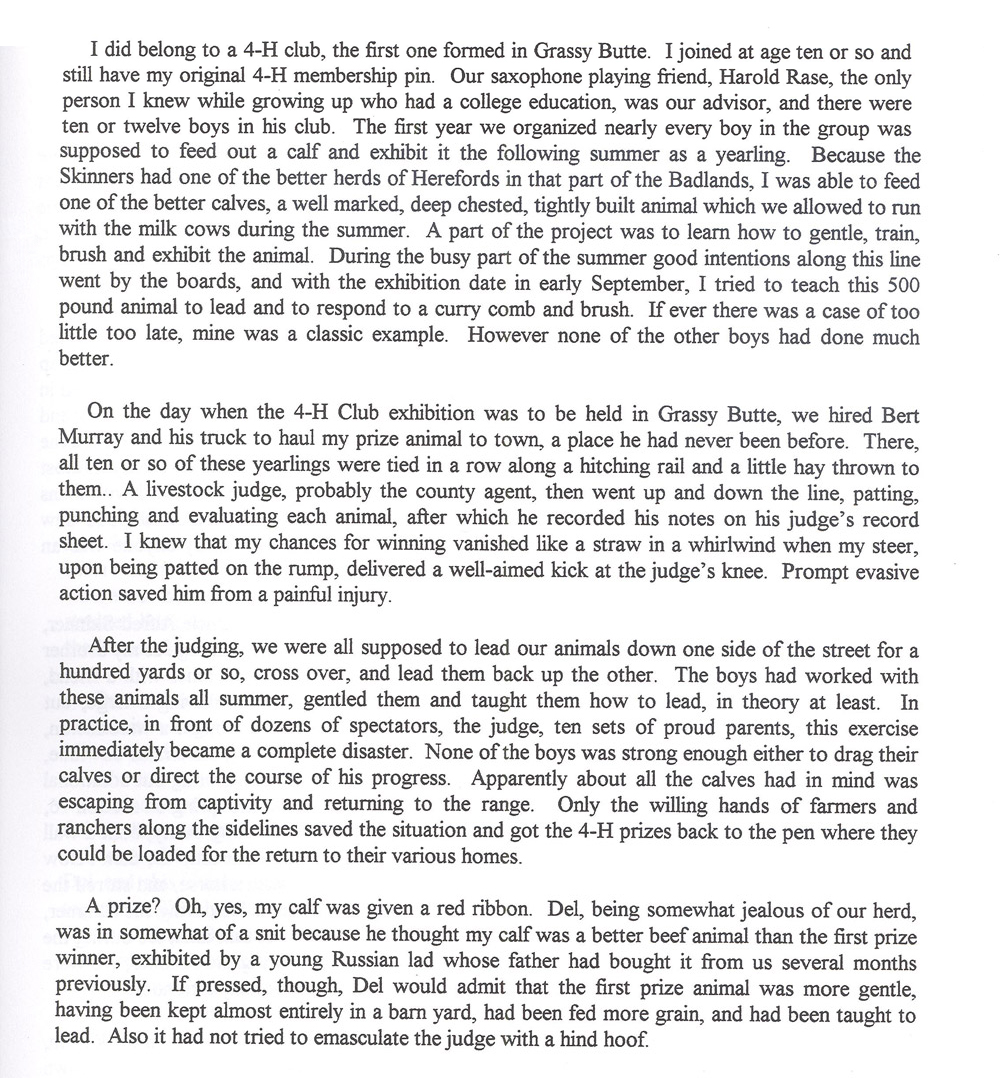 Document 5: Richard Skinner was born on a ranch near Grassy Butte in 1921. Though his family moved to Dickinson in 1934 so that he could go to high school, he was able to raise a calf and corn on the family ranch. His uncle Del ran the ranch. Skinner tells an amusing, but often typical, story of his 4-H projects. From Richard Skinner, From Frontier to Oil Boom in the Badlands of North Dakota, self-published, 1987.

The Extension Service absorbed the rural youth clubs that were already helping farm children take an interest in rural life. These youth programs started sometime around 1900. The after-school clubs taught boys how to grow corn, raise pigs, and pursue other agricultural projects. (See Document 5.) Around 1908, some of the Iowa clubs began to use a three-leaf clover as a symbol. The leaves stood for Heart, Head, and Hand. Several years later, a fourth leaf was added which stood for “hustle.”  Hustle was eventually changed to Health. The clubs have been known by the name 4-H since 1914.

As 4-H clubs organized in agricultural counties throughout the eastern and Midwestern states, the leaders suggested that the clubs be part of a cooperative agreement among federal, state, and county governments. The clubs gained federal and state support under the Smith-Lever Act. (See Document 6.)

To Make the Best Better

I pledge my head to clearer thinking, my heart to greater loyalty, my hands to larger service, and my health to better living, for my club, my community, my country and my world.

I believe in 4-H Club work for the opportunity it will give me to become a useful citizen.

I believe in the training of my HEAD for the power it will give me to think, plan and to reason.

I believe in the training of my HEART for the nobleness it will give me to be kind, sympathetic and true.

I believe in the training of my HANDS for the ability it will give me to be helpful, skillful, and useful.

I believe in the training of my HEALTH for the strength it will give me to enjoy life, to resist disease, and to work efficiently.

I believe in my country, my state, and my community and in my responsibility for their development. In all these things

I believe, and am willing to dedicate my efforts to their fulfillment.

Document 6:  Members of 4-H clubs memorized the creed, the slogan, the motto, and the pledge. These documents defined the program and guided members in all of their activities. 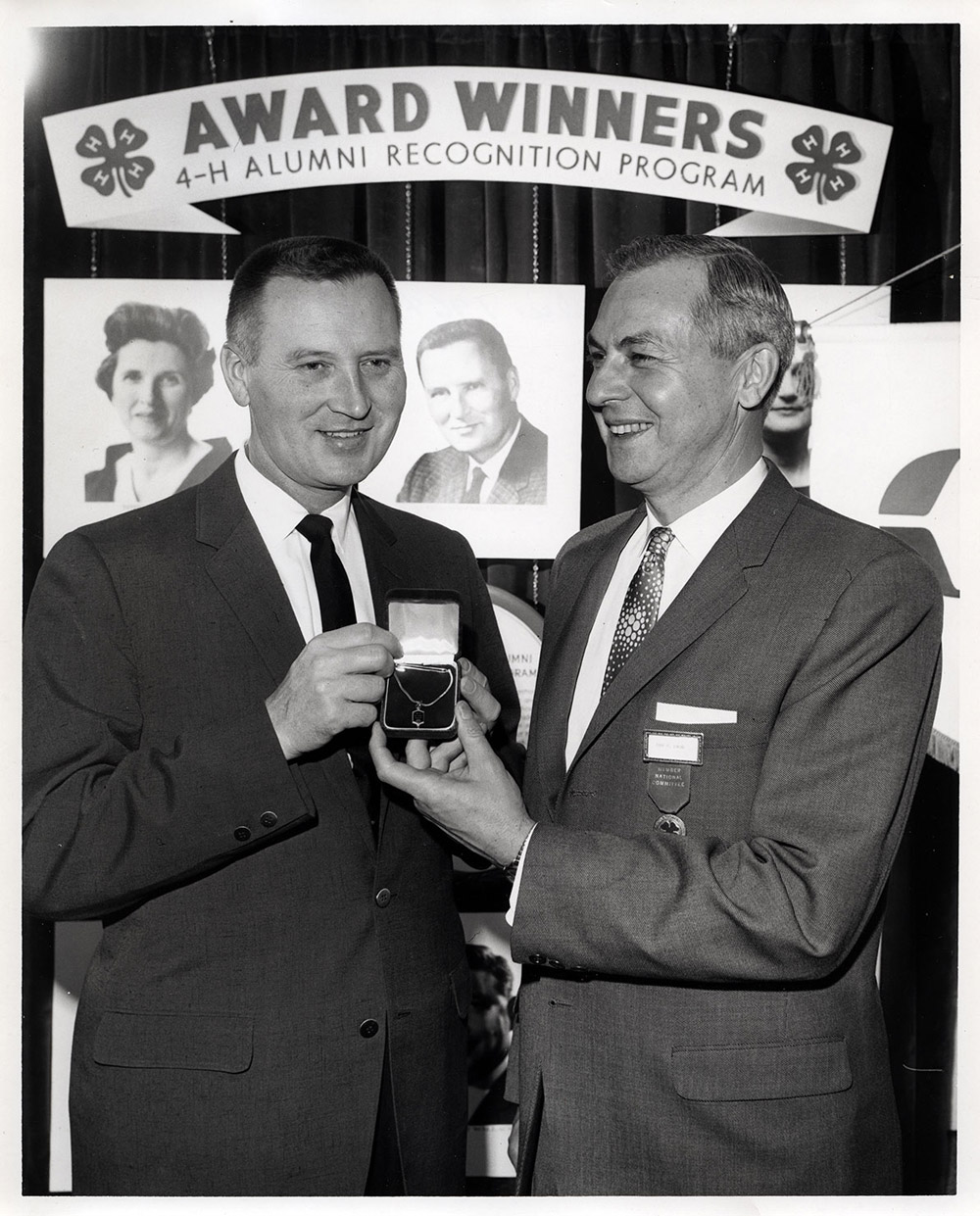 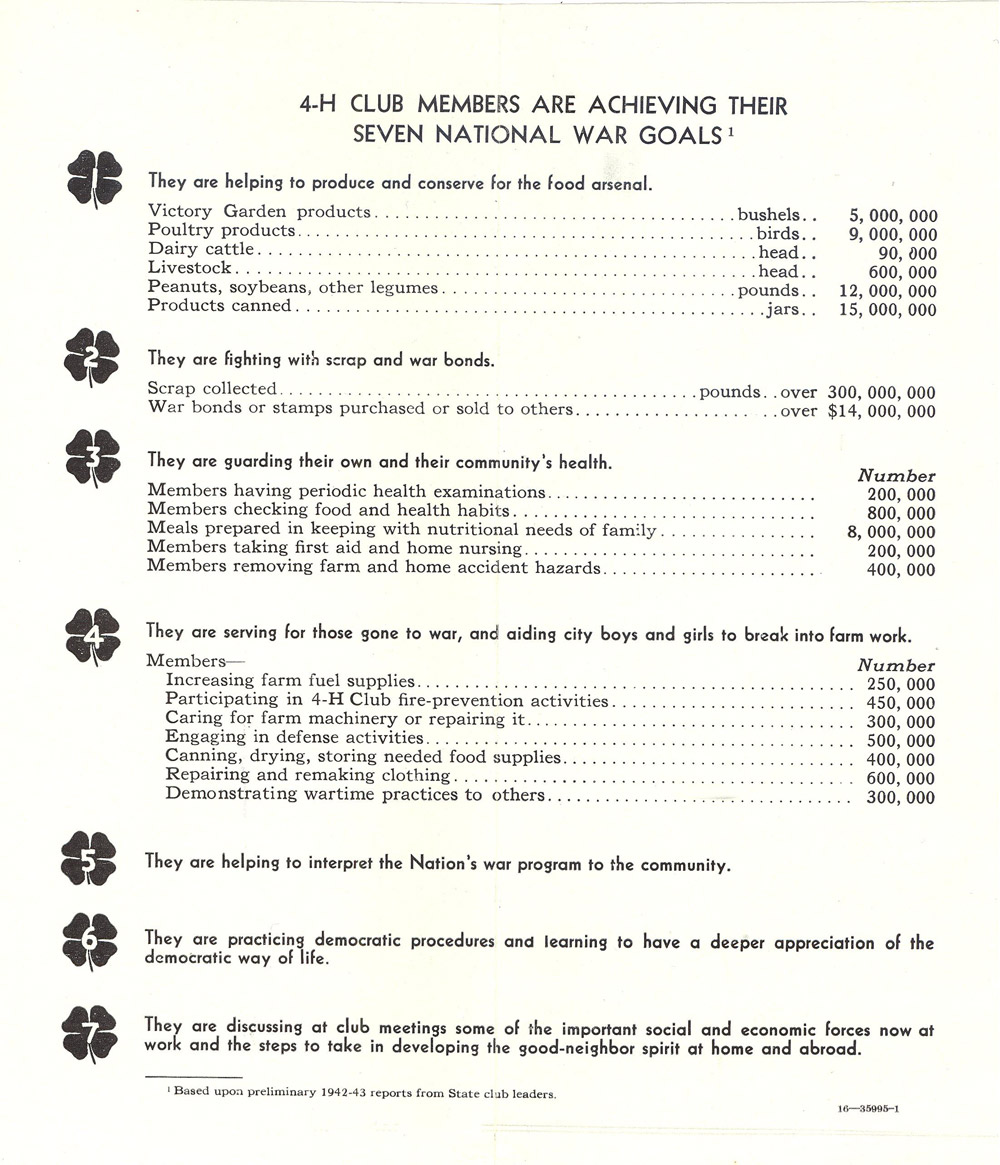 Document 7:  4-H clubs have adapted to changing times. Members today can study aerospace engineering or robotics as well as homemaking or farming. During World War II (1941-1945), 4-H members contributed to the war effort by collecting scrap, conserving food, and contributing to farm production. SHSND A 1.59:51.

As 4-H grew in importance, it developed a world-wide presence. By 1965, 4-H clubs could be found in 76 countries located in Asia, Europe, South America, and Africa. Membership reached more than 4 million members between the ages of nine and nineteen.

Today, 4-H club members are interested in robotics and aerospace engineering. Agriculture and rural homelife remain important aspects of 4-H, but clubs are now found in cities as well as rural communities and club members are no longer divided into boys and girls club.

Why is this important? 4-H was and still is one of the largest organizations for young people in the United States. Though it was at one time considered an organization only for farm children, it adapted to modern life by including urban children while providing guidance for a wide variety of projects. Today, more than four million children participate in a variety of 4-H programs. Less than half of the participants live in rural areas and small towns. Most of the members live in larger towns and cities.