According to many of the people who once lived there, Omemee was the best place on earth. The tiny town had a hotel, two banks, an implement dealership, seven grain elevators, and a railroad depot. And a peak population of 650 (in 1906). (See Image 5.) More importantly, Omemee had a soda factory and the best baseball team in the state. With so many good qualities, how could a town like OmemeeResearching the history of Omemee is not easy. The People of Bottineau County, a history written by the Centennial Book Committee in 1984 has a little information on Omemee. I Remember, I Rememberby the Bottineau County State Centennial Committee in 1989, includes a few pages about the people who lived in Omemee. Reading those short biographies tells us about the families and the work they did. These paragraphs include a lot of information about where people moved as the town failed. An excellent source of memories about Omemee is the of North Dakota website (http://www.ghostsofnorthdakota.com/category/omemee-nd/Ghosts). Using similar research techniques, you should be able to find out more about abandoned towns in your region. disappear from the map of North Dakota?

Omemee was just a place between Bottineau and Willow City until the people in the area petitioned the U. S. Postal Service for a post office. They submitted a list of possible names. In 1890, the Post Office chose Omemee and appointed a postmaster. The Great Northern railroad chose Omemee for a town and a depot in 1893. Then, the Soo Line railroad came through in 1905. With two of the state’s three major rail lines intersecting in Omemee, the people thought the town would grow into a metropolis to rival Bismarck or Fargo. 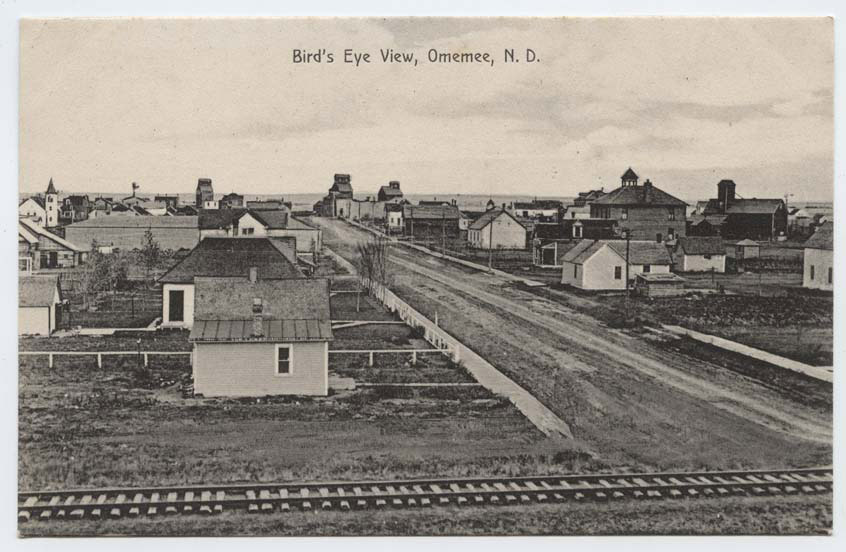 Image 5: This postcard shows a view of Omemee when the town had banks, stores, schools, and a soda factory. By 1969, Omemee had lost most of its population to Bottineau or bigger cities. SHSND 2012-P-009-06.

Many of the residents were Scottish immigrants or Canadian immigrants of Scottish descent. Like their ancestors, they built a Presbyterian church. Later, some Methodists came to town and built their own church. Together the Presbyterians and Methodists built a grade school. In 1903, they built a new school with brick produced in Omemee’s brick factory. (See Image 6.) In 1918, Omemee opened a high school. 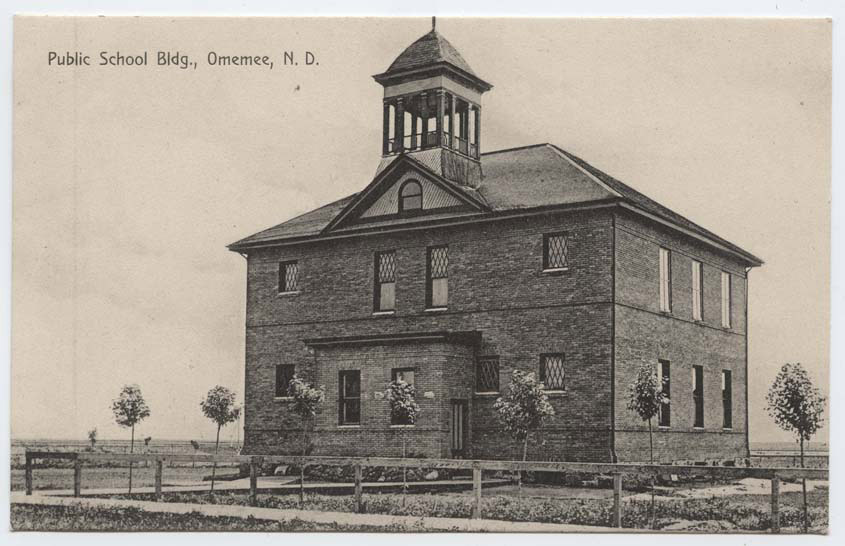 The residents of Omemee and nearby farmers could buy a Reo automobile from Mr. Harrington or a Chevrolet from John Rudolph. But cars meant that George Perrin had to close his livery. Perrin had made a nice living from the livery with 132 horses available for hire. No one needed to hire a horse when automobiles provided transportation.

Farmers could buy International tractors and purchase hardware or lumber in Omemee. When crop prices were high, farm families could shop at Ebenhahn’s store. Omemee residents considered Ebenhahn’s to be one of the four finest stores in the state of North Dakota.

On summer evenings and Sunday afternoons, people from all over the region came to watch the Omemee baseball team play. Omemee claimed the team was one of the best baseball teams in the state. The Omemee team, like many other small town teams, sometimes hired professional ballplayers to improve their game. During the baseball season, the pros lived at the Shamrock Hotel run by Kate Edmonson, a widow with six children. Everyone said that the local Brandt boys were even better than the professional ballplayers. There were enough Brandts to field an entire team. Andy Brandt, the catcher, was so good that everyone said he could have played in the major leagues. His brother Bob was a great pitcher.

Omemee was a dancing town. Anyone in the area who enjoyed dancing would go to Omemee to dance. The dances were held in the ballroom on the second floor of Harrington’s Hall. Omemee’s brass band was one of the best in the whole state. 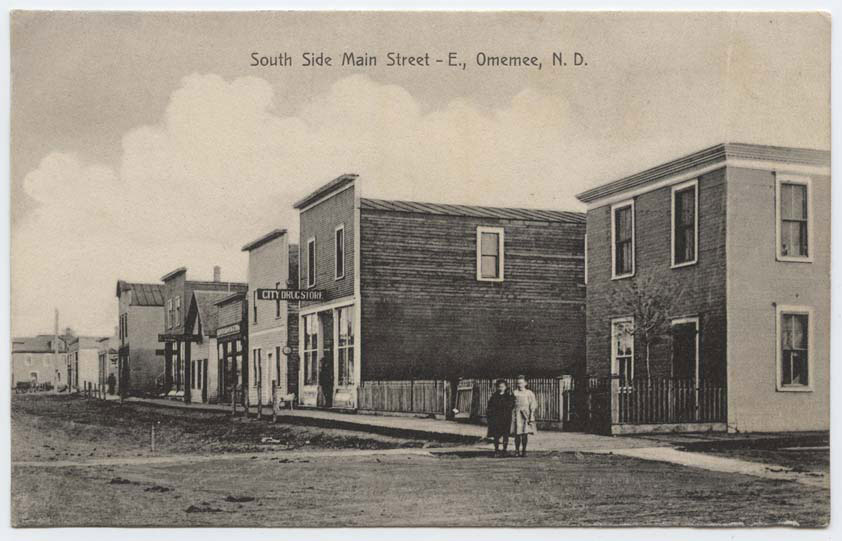 Image 7: Omemee was organized by the Great Northern Railroad after the post office had already been established there. In 1905, the Soo Line built a track along the southern edge of town. Omemee seemed to be in a good position to grow, but over the decades slowly lost population and then was abandoned altogether. SHSND 2012-P-009-02

In 1926, Chris Rasmussen opened the Omemee Bottling Works where he made several flavors of soda. People said that he learned the art of soda making in Denmark where he was born. Everyone agreed that Rasmussen’s soda was the best, especially the orange flavor. Rasmussen said that the secret to the excellent qualities of his soda was the water. He brought it to town from the well on the Krohn farm which had the best water around. A bottle of Omemee soda cost five cents. (See Image 7.)

During World War II, opportunities for work in California or Seattle, Washington encouraged many Omemee residents to move west. Few returned to the small Bottineau County town. The shrinking population caused the Presbyterians and the Methodists to join together to keep one church open. The railroad depot was closed. Schools in the district consolidated. In 1951, Omemee High closed, and students took a bus into Bottineau for high school.

The toughest year in Omemee’s decline was 1965. The town’s population had fallen to fewer than 10 people. The grade school and the post office closed. The town held on for a few more years. Then, in 1969, Grace Schultz closed her store and moved to Bottineau with her husband. Chris Rasmussen closed the soda factory. Omemee now had a glorious past, but no future.

Why is this important? Omemee’s story is much like the story of other North Dakota towns. It is a story of change. Many factors contributed to the death of Omemee. Omemee began as a service town to farms and the railroads. In time, the declining rural population meant there were fewer customers for the stores of Omemee. Automobiles brought people to town for dances, but also made it very easy for people to drive to Bottineau or Minot to shop, attend church, or work. World War II caused a major loss of population as young people left Omemee for good jobs on the West Coast or went into military service.

Economic troubles killed Omemee and other small towns. However, small towns had a very important social quality that could not be replaced by city life. Jacelyn Simonski who grew up in Omemee remembered how important Omemee was in her life: “I still have . . . fond memories of growing up in a place where you know everyone you meet on the street, where people really know one another and help each other, or just stop by unannounced for a cup of coffee or a visit.” Omemee died because other towns were bigger, but no other place was better.