The 1986 law and the Dakota Water Resource Act of 2000 created new directions for the Garrison Dam and Garrison Diversion. These laws provided funding for urban, rural, and industrial water projects. Good quality Missouri River water from Lake Sakakawea is now being piped into many towns and farms to replace saline, discolored, or arsenic-laced well water. (See Image 14.) 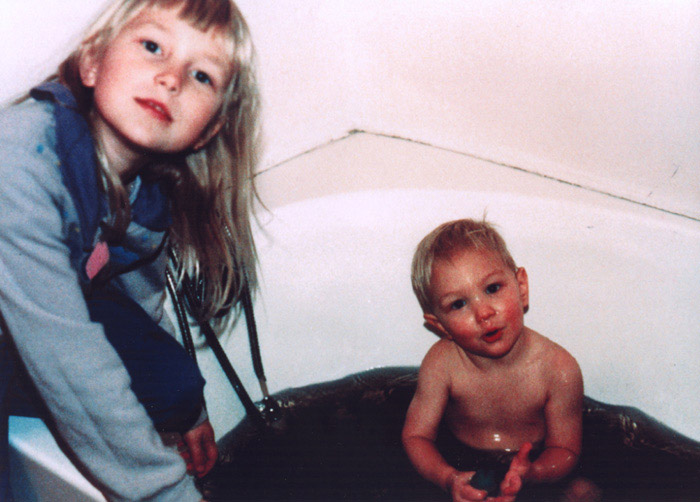 Image 14: The water in southwestern North Dakota was brown before the Southwest Water Pipeline brought fresh water to towns and rural homes in the early1990s. This baby was bathing in water that had been declared safe, but did not look very clean. This family was happy to receive clean water from a pipeline that drew water from Lake Sakakawea. Courtesy McCormack Family and North Dakota Water.

The failure of the irrigation projects has turned into highly successful clean water projects for cities like Kenmare. The water wells at Kenmare were contaminated with arsenic, and the city would have had to build an entirely new water treatment plant in order to remove the contaminants from the water. A small town like Kenmare could not afford such an expensive project. The Northwest Area Water Supply (NAWS) project brought fresh water to Kenmare, Berthold, and other cities in the area. Similar water projects have been or will be built throughout the state to provide safe, clean, water to cities, farms, and industries.

In addition to fresh water, the Garrison Dam and the other mainstem dams on the Missouri River produce 3,000 megawatts of electricity. Hydro-power is a form of renewable energy. As long as water flows from the Rocky Mountains into the Missouri River, the power of water can be used to turn turbines that generate electricity. The water is returned to the stream after it flows through the turbines. As electricity leaves the power plant on the river, it can be directed to other power plants to generate more electricity.

Garrison Dam Power Plant has five turbines which generate on average 2.2 billion kilowatt-hours (kWh)A kilowatt-hour (kWh) is the standard measurement of electrical usage for homes. It measures how many kilowatts are used in one hour. Your home’s electrical bill will state how many kilowatt-hours were used that month. The average North Dakota home uses 1,091 kWh each month. If you turn on a 100- watt incandescent light bulb and leave it on every hour of every day for a month it would use about 73 kWh. A medium size window air conditioner uses about 1,000 watts in one hour, or one kWh. A megawatt-hour equals 1,000 kWh. Megawatt-hours are used to measure the output of power plants." of electricity each year. This is the same as 2.2 million megawatt-hours (mWh) each year. This figure varies with the amount of water flowing through the power plants turbines. In 2011, when Lake Sakakawea was at full capacity due to flooding and water release from the dam was at a historic high, the power plant generated 2.6 billion kWh.

Missouri River water has found another use that was not part of the plans for the original Pick-Sloan project. Water from Lake Sakakawea, along with well water, is being used to fracture (or “frack”) oil wells in western North Dakota. Currently, oil fracking uses 12,629 acre feet of water per year. (An acre-foot is the amount of water required to cover one acre with water one foot deep or 325,851 gallons). This is slightly more than the water used by farms and rural homes in North Dakota each year. Some of this water comes from Lake Sakakawea; some comes from ground water sources or wells. A Bakken oil well requires about two million gallons of water to crack the rock and let the oil start flowing. After a well is opened, it requires about 600 gallons per day to keep the oil flowing.

Why is this important? Though the Pick-Sloan project that built Garrison Dam and Garrison Diversion had many weaknesses, there were notable successes, too. Fresh, clean water to small towns, excellent recreation opportunities, and flood control are some of the successful aspects of Garrison Dam and Diversion. It is important to remember that the dam and diversion are not “done.” Lake Sakakawea continues to change as silt settles to the bottom of the lake behind the dam. The diversion will be used for a variety of projects, some of which we haven’t begun to think about yet. These changes to the landscape will be with us for hundreds of years to come.