Below are transcriptions of a few entries from the diary Sorenson kept while serving in the Philippines. The editor has added explanatory words in brackets [. . . ]. Sorenson used a term for the enemy which was in common use in his day. This term is no longer acceptable. The editor has replaced Sorenson’s term with the term “Philippine insurgents.”  Readers should remember that in war the enemy is usually designated by a term which dehumanizes them as was the case in the Spanish American War and the Philippine War that followed.

Tues. February 21, 1899. Fine day. Slept in the [rice] Field again last night. Fired on from the woods on our front after we had gone to sleep. Large fire in Paco district. 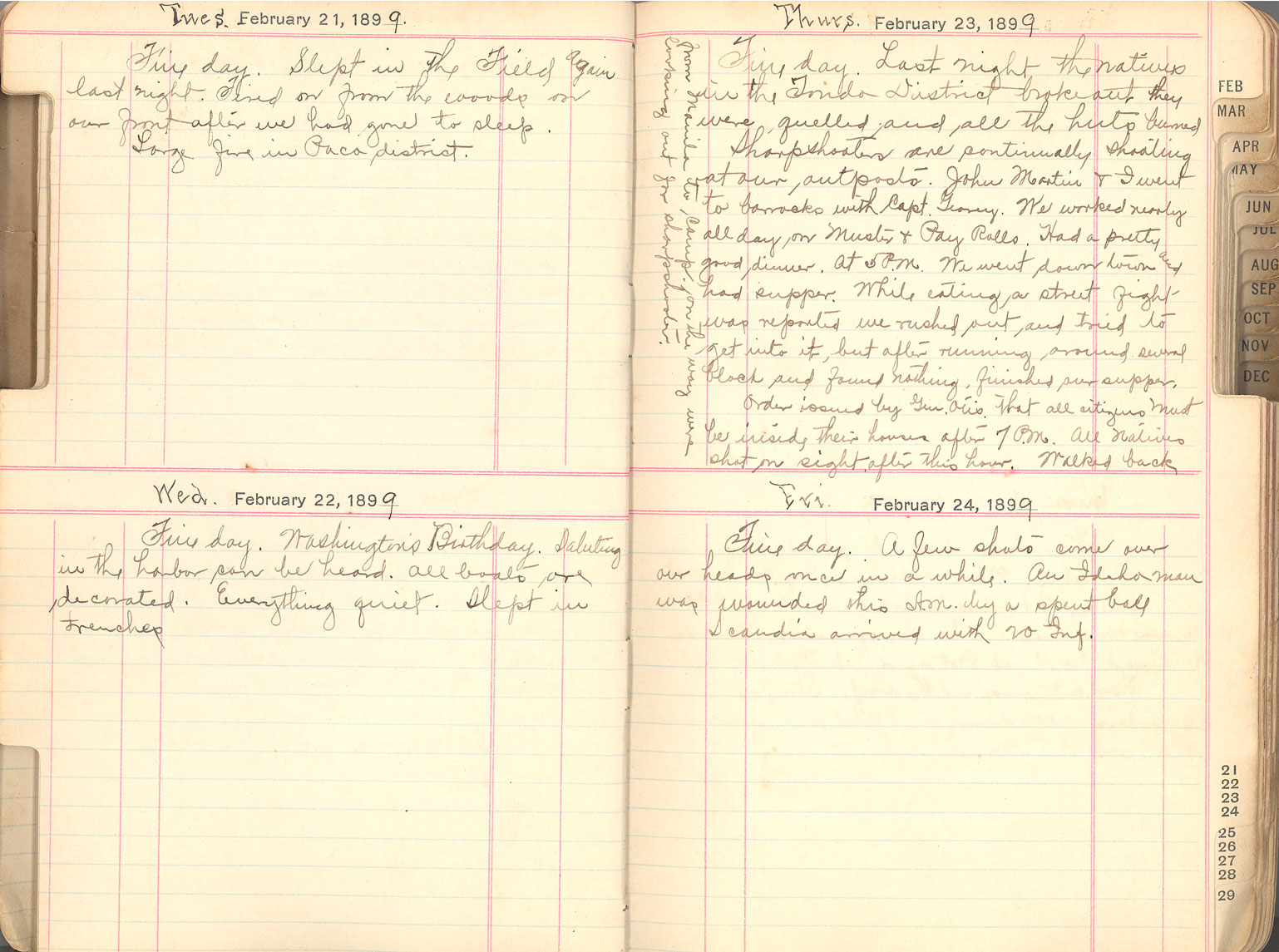 Wed February 22, 1899. Fine day. Washington’s Birthday. Saluting in the harbor can be heard. All boats are decorated. Everything quiet. Slept in Trenches. 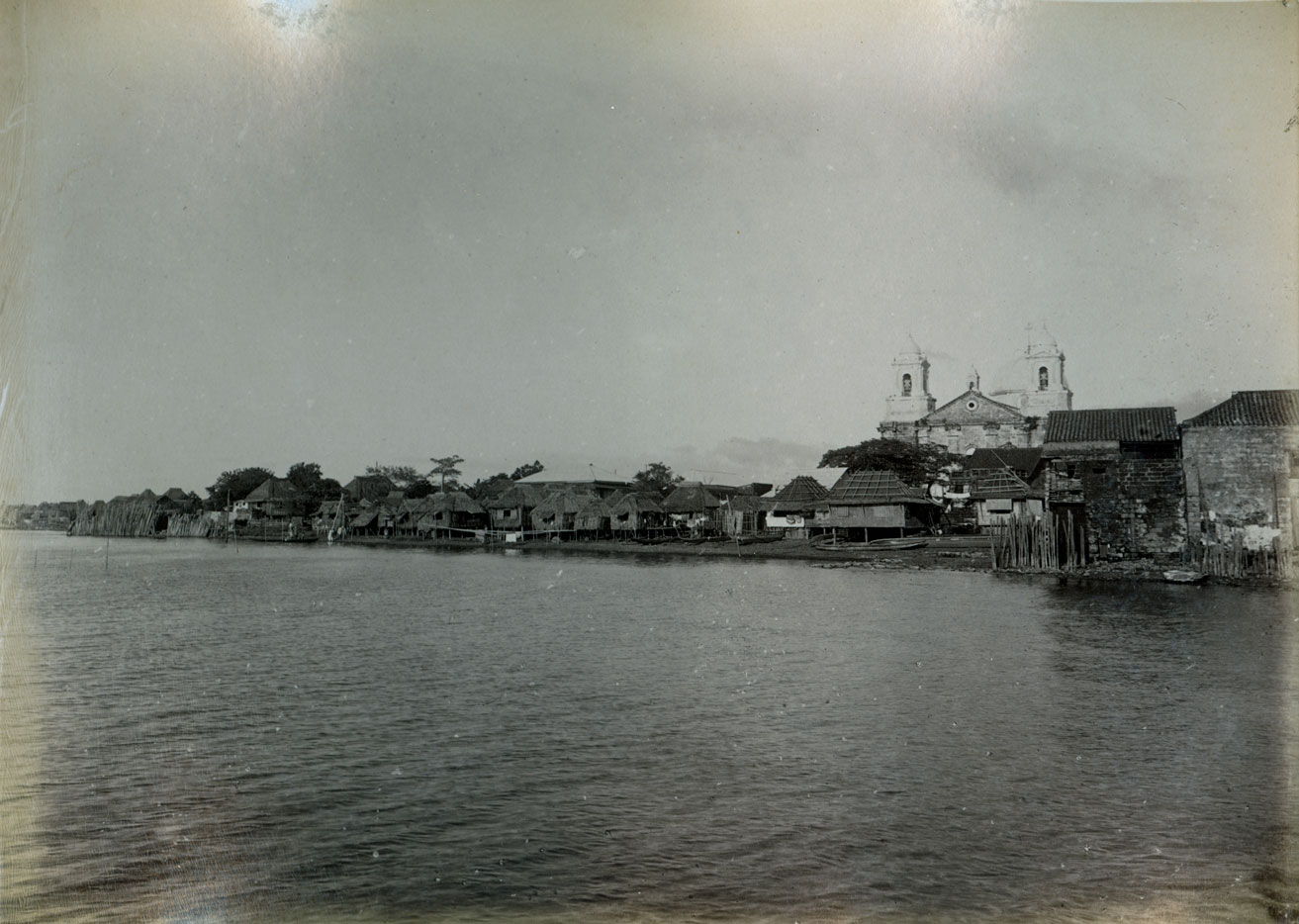 Image 12: This is a view of the village of Tondo. The cathedral dominates the skyline, but the thatched-roof houses were typical dwellings for Filipinos. During the war, several deadly diseases broke out. If someone died of small pox or cholera in one of these houses, it would be burned to try to prevent the spread of the disease. Harold Sorenson, sergeant of Company B, First North Dakota Volunteers, wrote in his diary that an uprising broke out in Tondo. The uprising was stopped, and the village was burned. SHSND 10169-70.

Thurs. February 23, 1899. Fine day. Last night the natives in the Tondo District broke out they were quelled, and all the huts burned. (See Image 12) Sharpshooters are continually shooting at our, outposts. John Martin & I went to barracks with Capt. Geary. We worked nearly all day, on Muster & Pay Rolls. Had a pretty good dinner. At 5 P.M. We went down town and had supper. While eating, a street fight was reported we rushed out and tried to get into it, but after running around several block and found nothing. Finished our supper.

Order issued by Gen. Otis. That all citizens must be inside their houses after 7 P.M. All Natives shot on sight after this hour. Walked back.

Fri. February 24, 1899. Fine day. A few shots came over our heads once in a while. An Idaho [National Guard] man was wounded this A.M.by a spent ball 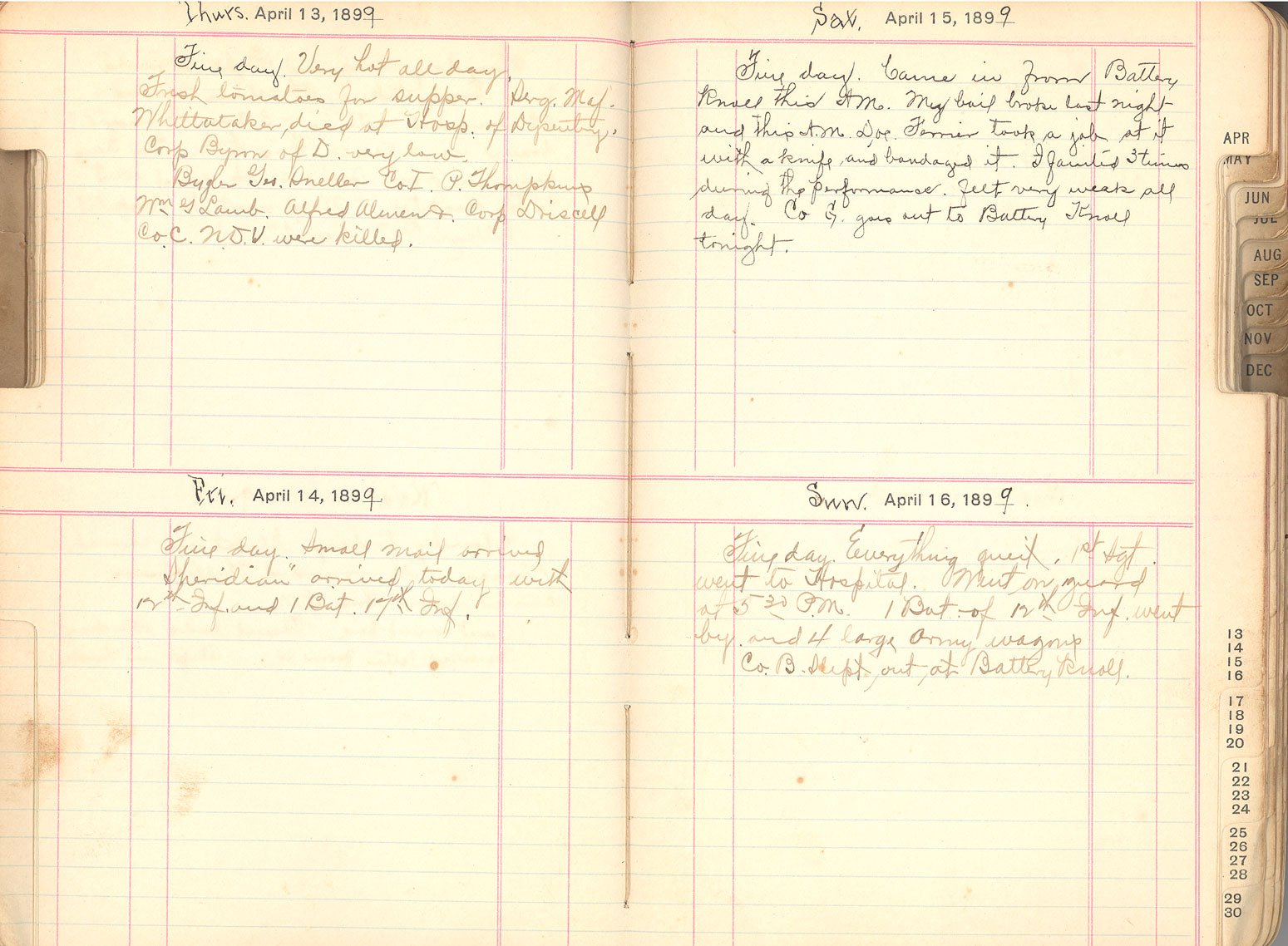 Sat. April 15, 1899. Fine day. Came in from Battery Knoll this AM. My boil [a painful, localized skin infection] broke last night and this A.M. Doc. Ferrier took a jab at it with a knife and bandaged it. I fainted 3 times during the performance. [“Doc” Ferrier was the medical corpsman for the North Dakota Volunteers. In civilian life, he was a veterinarian.]  Felt very week all day. Co G goes out to Battery Knoll tonight.

Co. B. slept out at Battery Knoll.

Fri. April 21, 1899. Very Hot day. Inspection in marching order. Was told to be ready at 1:30 P.M. Went down town with [Corporal] Hummel had icecream & cake. Got back at dinner. At 1:30 PM mail arrived. I got one letter. 200  P.M. the Cos [companies] were formed and shortly after the Battalions. The whole regiment marched, north through Manila across the large bridge. 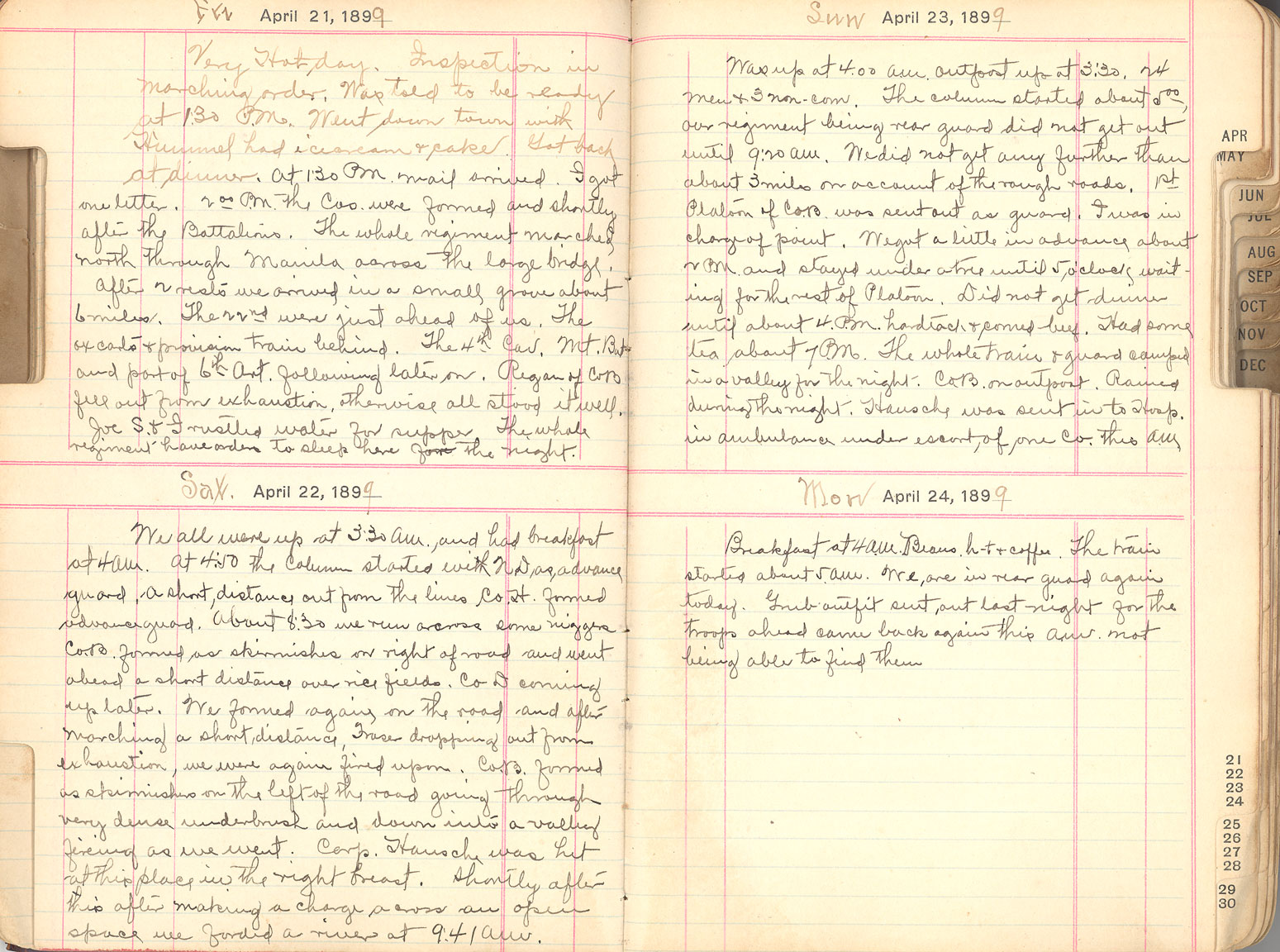 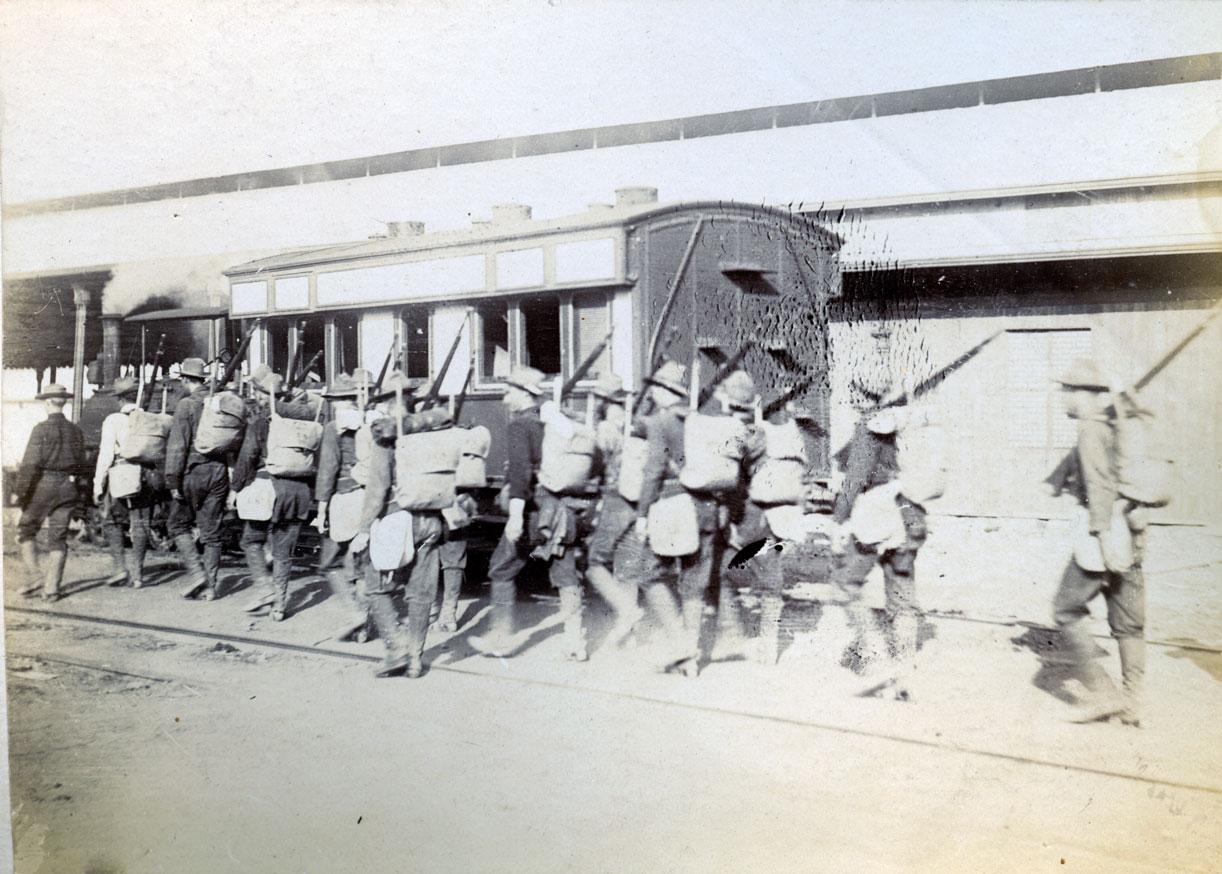 Image 13: Some soldiers were transported by train, other by casco boats. Most of the First North Dakota traveled on foot with carts pulled by water buffalo or small ponies to carry their gear. Soldiers typically carried two days’ rations which consisted mostly of hard tack (an unappealing, cracker-like biscuit) and canned beef. The fact that the First North Dakota never missed a meal (because they carried their food with them) contributed to their generally good health while at war in the Philippines. SHSND 10169-309.

After 2 rests we arrived in a small grove about 6 miles. The 22nd [Infantry] were just ahead of us. The oxcarts & provision train behind. (See Image 13) The 4th Cav [Cavalry] Mt. Bat [Mountain Battery] and part of 6th Art [Artillery] following later on. Regan of CoB fell out from exhaustion otherwise all stood it well. Joe S & I rustled water for supper. The whole regiment have orders to sleep here for the night.

Sat. April 22, 1899. We all were up at 3:30 AM., and had breakfast at 4 AM. At 4:50 the column started with ND, as, advance guard. A short, distance out from the lines Co H. formed advance guard. About 8:30 we run across some [Philippine insurgents.]  Co.B. formed as skirmishes on right of road and went ahead a short distance over rice fields. Co D coming up later. We formed again, on the road, and after marching a short distance, Fraser dropping out from exhaustion, we were again fired upon. Co.B formed as skirmishes on the left of the road going through very dense underbrush and down into a valley firing as we went. Corp. Hansche was hit at this place in the right breast. Shortly after this after making a charge across an open space we forded a river at 9:41 AM.

Sun. April 23, 1899. Was up at 4:00 AM. Outpost up at 3:30. 24 men & 3 non-com. The column started about 500, our regiment being rear guard did not get out until 9:20 AM. We did not get any further than about 3 miles on account of the rough roads. 1st Platoon of CoB was sent out as guard. I was in charge of point. We got a little in advance about 2 PM and stayed under a tree until 5 o’clock, waiting for the rest of the Platoon. Did not get dinner until about 4. P.M. hard tack and canned beef. Had some tea about 7PM. The whole train & guard camped in a valley for the night. CoB on outpost. Rained during the night. Hansche was sent in to Hosp. in ambulance under escort, of, one Co. this AM.

Mon. April 24, 1899. Breakfast at 4 AM. Bean, h-t [hard tack] & coffee. The train started about 5 AM. We, are in rear guard again today. Grub outfit sent out last night for the troops ahead came back again this AM. not being able to find them