Opposition to the Nonpartisan League (NPL) and its programs rose much as the League did. Groups of people began to talk about ways to limit the League’s power or to remove League members from state office. 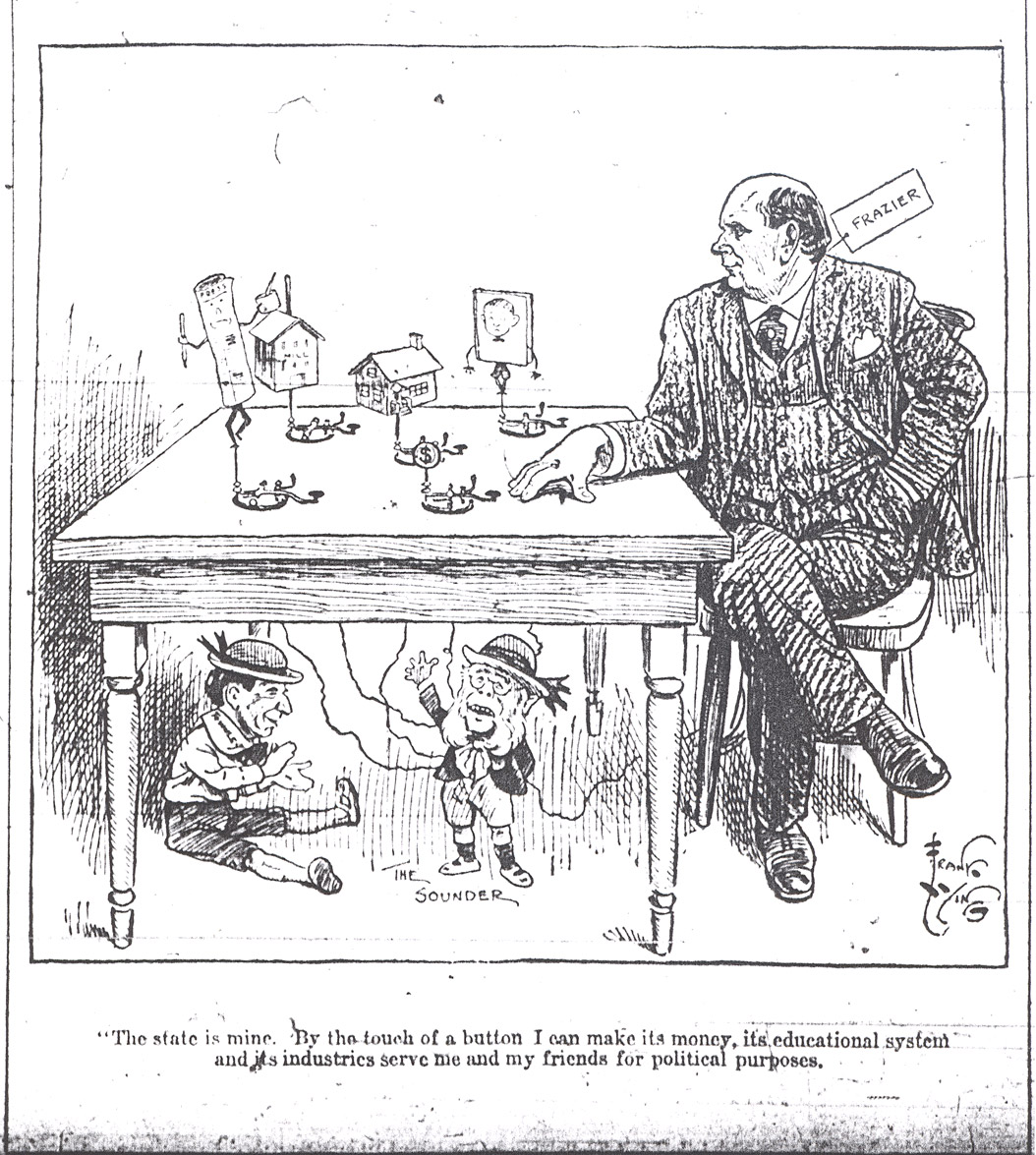 Document 14: The newspaper of the Independent Voters Association, The Independent, was similar to the Nonpartisan Leader in the material it published. However, its political interest was opposed to everything the Nonpartisan League stood for. The Independent also used political cartoons to express its political views. This cartoon (published March 13, 1919) shows Governor Frazier in control of state institutions and business. On the table are 'games' that represent newspapers, schools, the mill and elevator, and the state bank. Arthur Townley is the small child under the table (left side.) Townley claps his hands in appreciation of Frazier’s games

The first group to oppose the League called itself the Anti-Socialist League (ASL). It organized after the 1917 state legislature had ended. This group said that the League had some good ideas, but the programs were badly managed. Many members of the ASL were legislators who rebelled against the way that Arthur C. Townley controlled the legislature. The ASL believed that the NPL had built a spirit of democracy among North Dakota voters, but the dictatorial leadership of A. C. Townley had destroyed the promise of the League. (See Document 14) The ASC equated “Townleyism”To the I.V.A., Townleyism represented a particularly nasty form of socialism. Socialism is not the economic system of the United States (which is capitalism.) However, socialism is not necessarily un-democratic. Democracy is a political system that can be applied to a socialist nation or to a capitalist nation. In both economic systems, democracy needs to be carefully protected from people who would take personal control. Townley did not protect democracy in North Dakota. That mistake led to his downfall as the leader of the Nonpartisan League. with socialism. Both were considered unpatriotic, particularly in time of war.

Several more organizations, involving many of the same people, began to appear. They tried to “carry the truth to the people” and gave their support to legislative candidates who did not belong to the NPL. These organizations found support among farmers who liked parts of the NPL program, but did not like the way the NPL controlled government. The anti-NPL organizations also tried to include both Republicans and Democrats. 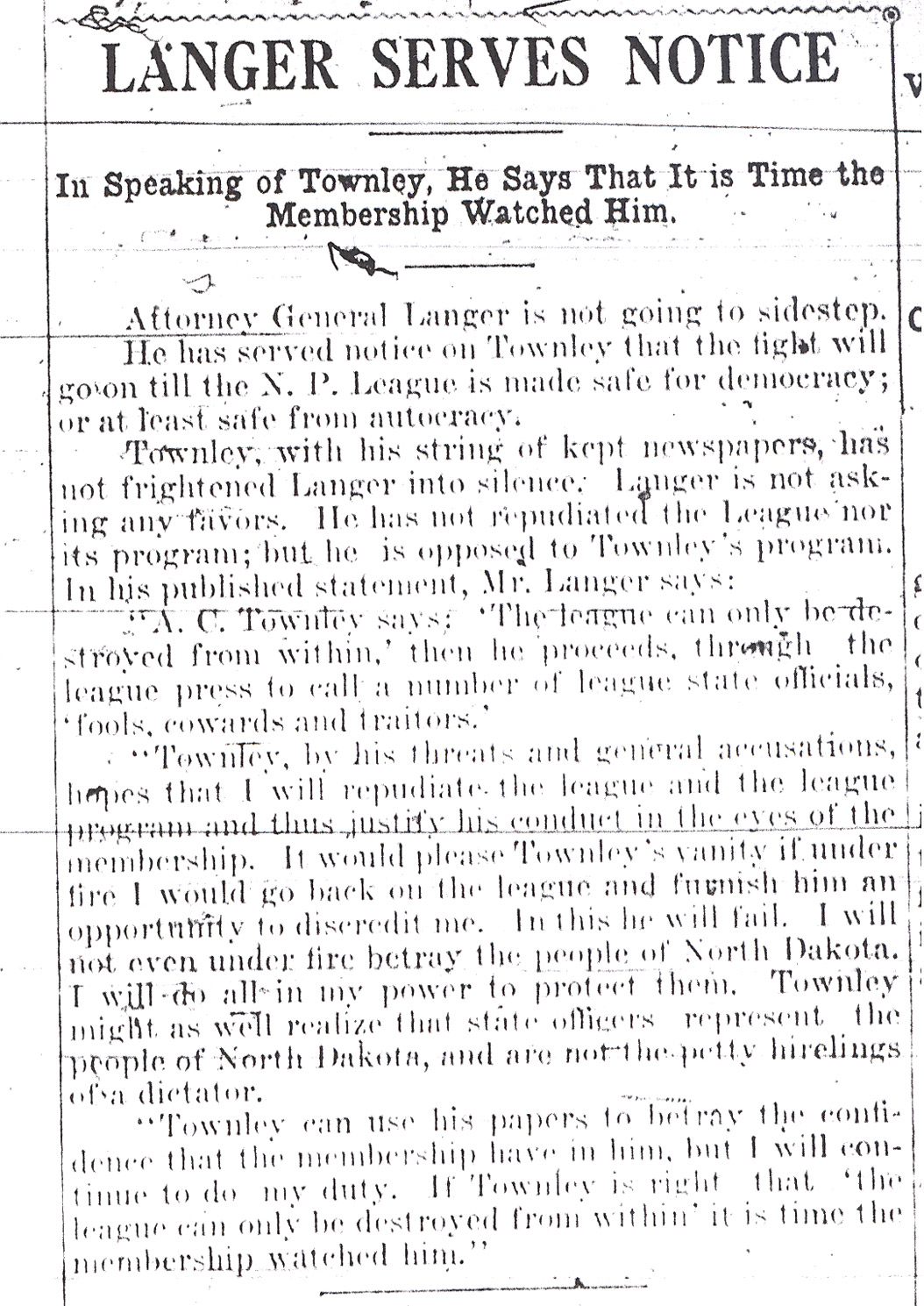 Document 15: The Independent was very happy to carry all of Attorney General William Langer’s complaints about Arthur Townley. Langer did not disavow the NPL program, but he firmly opposed Townley’s sole control of the organization and the legislature.  The Independent April 3, 1919.

Finally, in December, 1918, the people who opposed the NPL formed a new, effective organization called the Independent Voters Association (I.V.A.)  The I.V.A. proposed to educate voters about the NPL. The organization challenged several of the laws that emerged from the 1919 legislative session. Members of the I.V.A. successfully petitioned for the referral of seven NPL laws, including the law creating the Bank of North Dakota and the Industrial Commission (which would oversee the Mill and Elevator.)  The I.V.A. chose to use the referral process to bring the laws to the votes of the people demonstrating the organization’s faith in democratic processes. 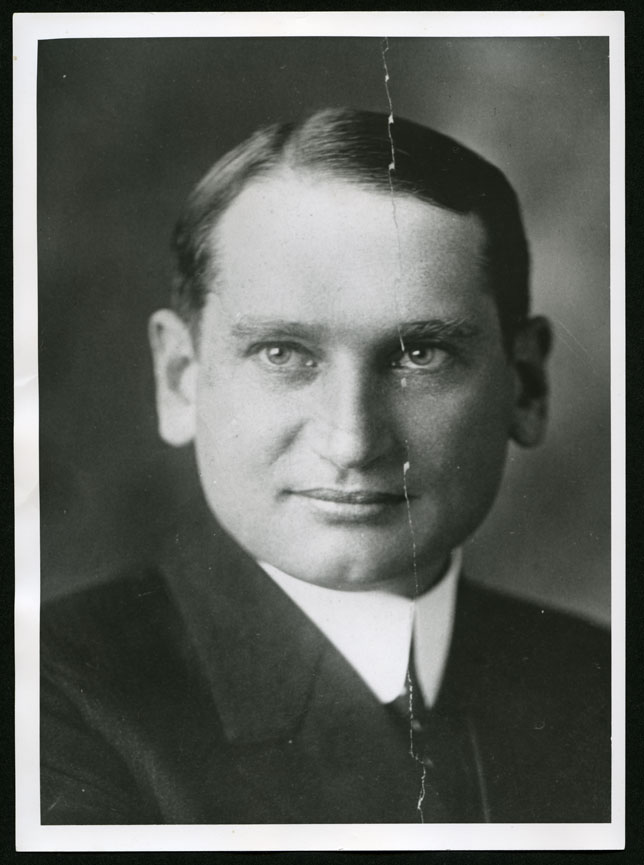 Image 15: William Langer was a popular, young, well-educated county attorney. He joined the NPL and was elected Attorney General of North Dakota in 1916. By 1919, Langer was in open conflict with Governor Lynn Frazier and Arthur Townley. Langer’s opposition to the NPL leadership helped the Independent Voters Association gain more support in North Dakota. SHSND A4292.

In order to bring its ideas to the public, the I.V.A. started a newspaper called The Independent that was published in Fargo. The newspaper was written in proper journalistic style, but with no pretense of impartiality. The Independent published the news that William Langer, Carl Kositzky, and Thomas Hall had turned against the NPL. (See Image 15) Langer was the Attorney General, Kositzky was the State Treasurer, and Hall was Secretary of State. All three men had been elected as members of the NPL. But after seeing the extent of Townley’s control of the organization and its members in the North Dakota legislature, all three had turned against the NPL. (See Document 15) 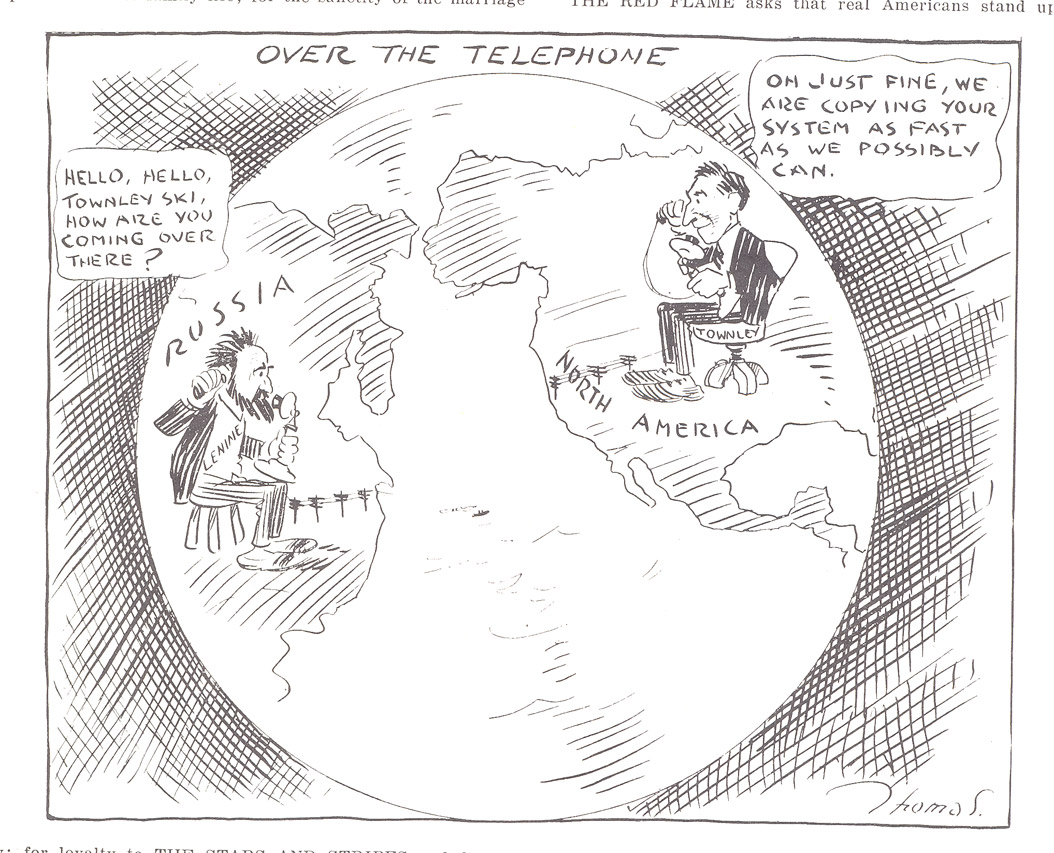 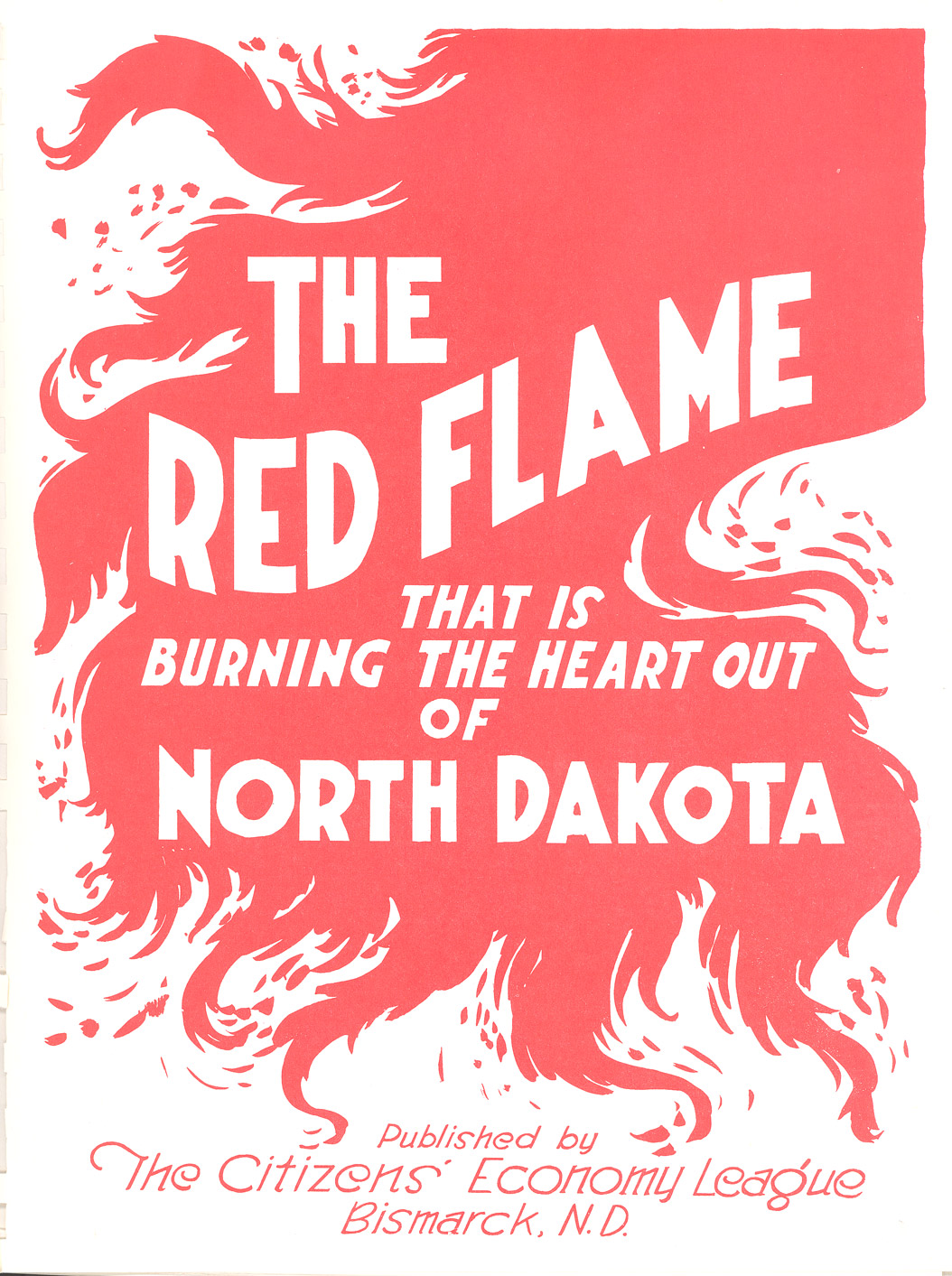 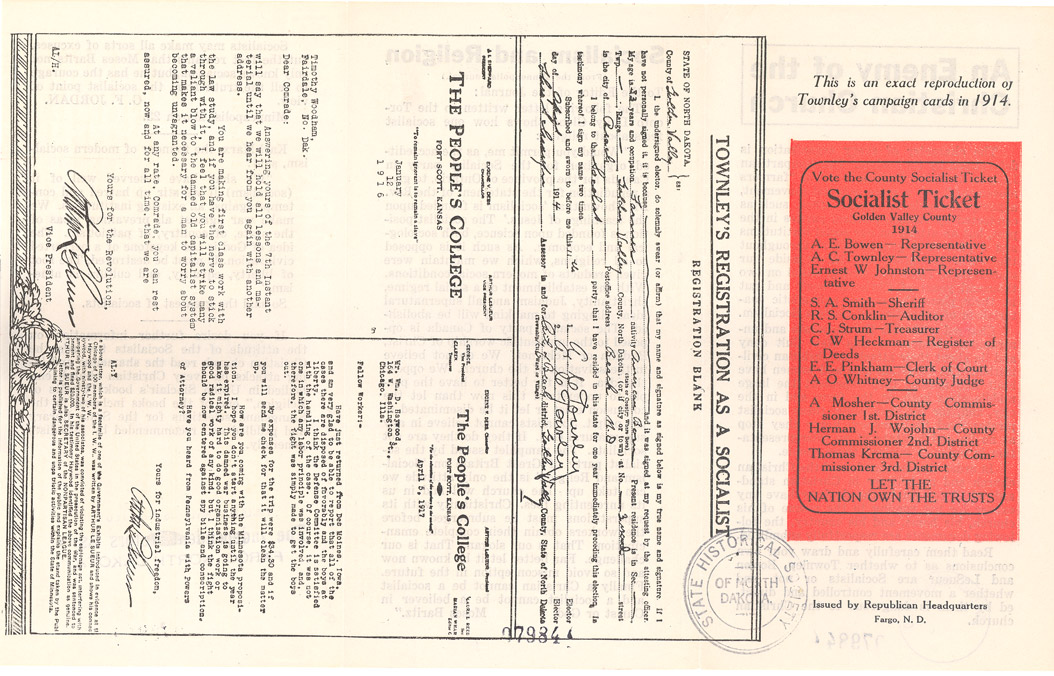 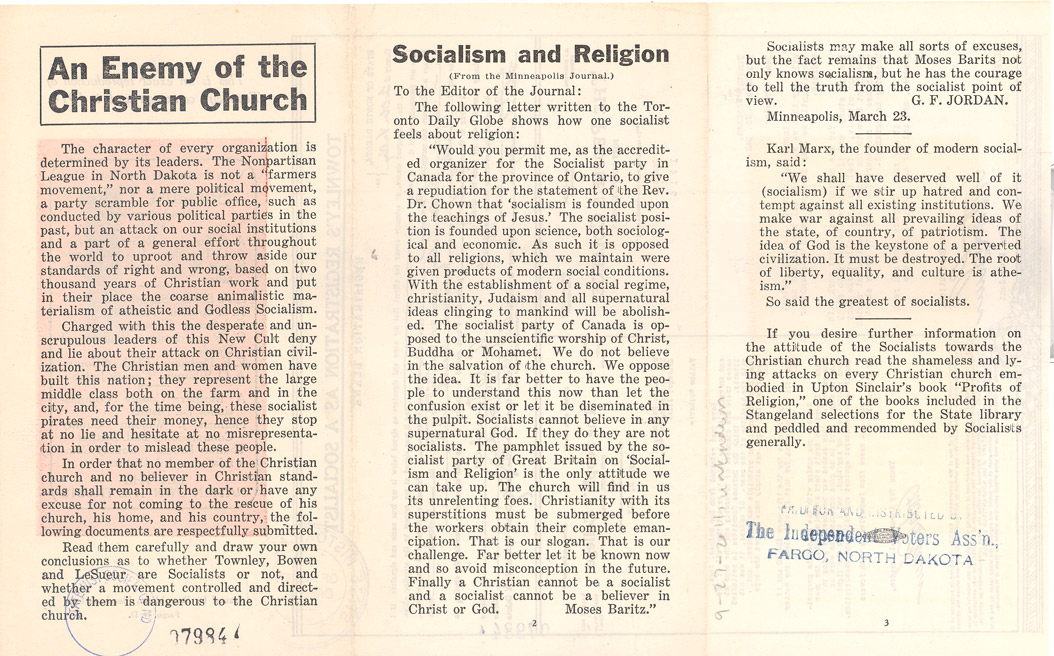 In November, 1919, Carl Kositzky and others who opposed the NPL formed an organization called the Citizens’ Economy League and began to publish a magazine called The Red Flame. This magazine also opposed the NPL, but was not officially associated with the I.V.A. The Red Flame offered its readers an emotional, fear-based, and often un-true view of the NPL and used a lot of cartoons to present its opinions. (See Document 16 & 17) The Red Flame’s cartoons and articles equated the NPL with Russian bolshevism, godlessness, and free love. The editors allowed people to believe that supporting the NPL would bring about the end of marriage and family life in North Dakota. The Red Flame suggested that the NPL favored “free love” which was a philosophy that denied the importance of marriage. Others attacked the NPL as being un-Christian. (See Document 18)

In spite of a vigorous campaign in print and in person, the I.V.A. failed to convince voters to vote against the NPL’s program. All seven measures were upheld by the voters. The Bank of North Dakota had the strongest vote with a majority of 13,256 votes.

There were some new developments in 1919. Towner County held a special election to replace Senator A. S. Gibbons who had died in office. The campaign brought all the political forces of the I.V.A. and the NPL to Towner County. The I.V.A. candidate, O. J. Beisel won a very close election.

In addition, the I.V.A. noted that the votes on the referred laws indicated a softening of support for the NPL. In others words, the NPL’s laws were not defeated in the election, but the vote was not as strong as it had been a year earlier. The I.V.A. had gained a foothold and would continue its effort to force the NPL out of state government.

Why is this important? Democracy sometimes walks a rocky road. The NPL addressed important issues, but consolidated its political power by controversial methods. In 1920, the NPL was still in control of state government. However, Townley was in jail. The Nonpartisan League was weakened when three of its top elected officials turned against the organization. The Independent Voters Association attacked the League on economic and political grounds and used the weaknesses of the NPL to the advantage of the I.V.A. As the League declined in membership, the I.V.A. grew.

However, the League was not dead, and farmers did not lose faith with its programs. After 1920, the League struggled to maintain and prove the worth of many of its programs and soon lost control of state government. Though League opponents used some nasty political tricks and lies, the I.V.A. restored balance to North Dakota politics. Within a few years, North Dakota again became a state where both Republicans and Democrats shared responsibility for government.