“Recall of All Officers from Governor Down” the Bismarck Tribune headlines screamed in the middle of page one. (See Document 4) The article introduced the proposed constitutional amendment outlining the recall process as though the bill had already amended the state constitution. The Tribune had long been opposed to the influence of the Nonpartisan League (NPL) over state government. With this amendment, NPL opponents could remove elected officers if they could secure enough signatures.

Document 4: The Bismarck Tribune was very excited by the introduction of the recall amendment in 1919. Even though the bill had only been introduced and had not been through committees or votes, the Tribune saw it as an opportunity to remove Nonpartisan League officials from state office. Once the bill passed, opponents of the Nonpartisan League used the bill to recall Governor Frazier. Bismarck Tribune, February 6, 1919.

Through a recall petition, voters could force a new vote on an elected official. This vote would take place before the expected end of the official’s term. Usually, another candidate for the office would be placed on the ballot. The candidate receiving the most votes would take office.

The bill passed the North Dakota House and Senate and was signed into law by Governor Lynn Frazier on March 6, 1919. Because it was written as an amendment to the state constitution, the recall bill had to be approved by the voters. (See Document 5) On March 16, 1920, the voters approved the recall amendmentby a vote of 29,262 to 17,255. 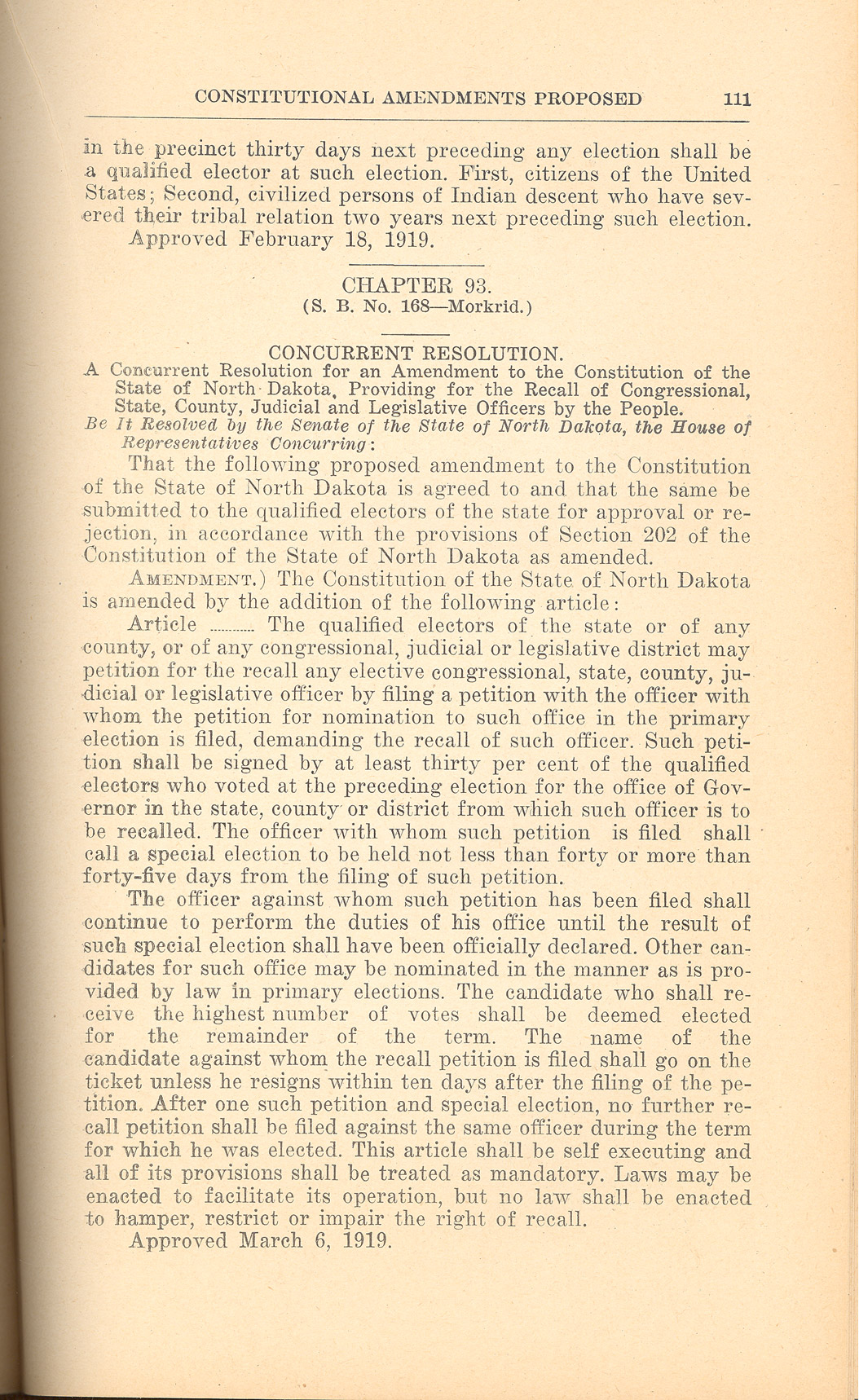 Document 5: The recall amendment laid out exact processes for citizens to use in bringing the election of a state official to a vote. The bill passed through the legislature with little controversy. Recall was approved by the voters in March 1920. Recall petitions were soon circulating. In November 1921, Governor Lynn Frazier was recalled from office. Laws of North Dakota, 1919.

Since the passage of the recall amendment, the process has worked well to make county and city governments responsive to voters. School boards often see recall petitions. However, North Dakota has the historic position of being the first state to recall a governor.

After recall was added to the constitution, people began to organize a movement to remove Governor Frazier, Secretary of Agriculture John Hagan, and Attorney General William Lemke (all NPL members) from office by recall. By September, 1921, petitions carrying 73,000 signatures were carried to the Secretary of State’s office. The election was set for October 28, 1921. Ragnvald Nestos was on the ballot to replace Frazier. The vote was relatively close, but the people voted to remove Frazier and Hagan from office. Lemke retained his office.

Frazier was elected in 1923 to serve North Dakota in the U. S. Senate. He retained that position until 1940.

Why is this important? The opponents of the Nonpartisan League saw growing discontent among the citizens of North Dakota with the methods and programs of the NPL. The opposition needed a tool to take advantage of the voters’ concerns. Ironically, the NPL’s opponents used a constitutional amendment created by the 1919 legislature, which was controlled by the NPL, to bring about the League’s downfall.

The recall of Governor Frazier in 1921 was the first use of recall against a state governor. No other state was successful in using recall against a governor until 2003 when Governor Gray Davis of California was recalled.

Like other progressive ideas, recall was designed to give citizens a more direct influence over government at every level. However, today only 18 states allow recall of public officials.