In 1892, Lars Ueland, an Edgely farmer and legislator, attended the national convention of the Populist Party (the political arm of the Farmers’ Alliance.)  There he learned about initiative and referendum which are two components of a progressive idea called direct democracy.There are other components to direct democracy. Recall is the power of the people to petition for an election for a specific state elected official. This usually occurs when the official has displeased the people to the extent that they cannot wait for the next regular election. Another component of direct democracy is the direct election of U. S. Senators. Until 1912, Senators were elected by the legislatures of each state. The seventeenth amendment to the U. S. Constitution gave the election of Senators to the people. Initiative is a method by which the people can propose a law or a constitutional amendment. If the law is supported by sufficient signatures on a petition, the law is presented to voters at the next election. If voters approve the initiative, the law goes into effect. A referendum occurs when citizens vote on a law that has been passed by a local or state government. Ueland introduced two bills in the 1893 legislative session. (See Document 1) He knew that the legislature would have to be introduced slowly to these new ideas, and he wanted to begin the discussion that would ultimately take 20 years.

Document 1: This newspaper column in the Bismarck Tribune on February 10, 1919 listed several bills under discussion in the legislature that week. Near the bottom of the column, the Tribune editors included the full text of the initiative and referendum laws. This was the first bill to address the progressive ideas of initiative and referendum in the North Dakota legislature. It would be 14 years before the bill creating a constitutional amendment would be passed, and another six years before the amendment was approved by the voters. Bismarck Tribune February 10, 1893

Initiative and referendum did not make much progress in the North Dakota legislature for several years. Alexander McKenzie’s political machine stopped progress toward direct democracy measures. In addition, prohibitionists opposed the measures. The Woman’s Christian Temperance Union (WCTU) feared that initiative could bring the prohibition clause of the North Dakota constitution back to the people for a vote. Since the vote was so close when the prohibition clause was voted upon in 1889, the WCTU did not want to take a chance on another popular vote.

Slowly, over the years, initiative and referendum acquired some support. The WCTU continued to oppose the measures, but in 1906, insurgent Republicans joined Democrats to elect John Burke to the governor’s office and a majority in the North Dakota House. McKenzie’s control was broken. The Democrats brought several new ideas to the legislature in 1907, including initiative and referendum.The other direct democracy issue for the Democrats in the 1907 legislative session was the direct primary. Instead of allowing the political parties to choose the candidates for the U. S. House of Representatives, the candidate would be chosen in a primary election by the voters. Reformers liked this measure because it reduced control of elected officials by their political party.

Lars Ueland, now a Democrat, introduced a bill to make initiative and referendum part of the state constitution. The bill was controversial and Ueland had to defend it vigorously. He argued that these measures would provide for a “simple and effective means . . . [to] prevent corruption, bribery, graft and bossism [and protect] the rights and liberties of the people.” 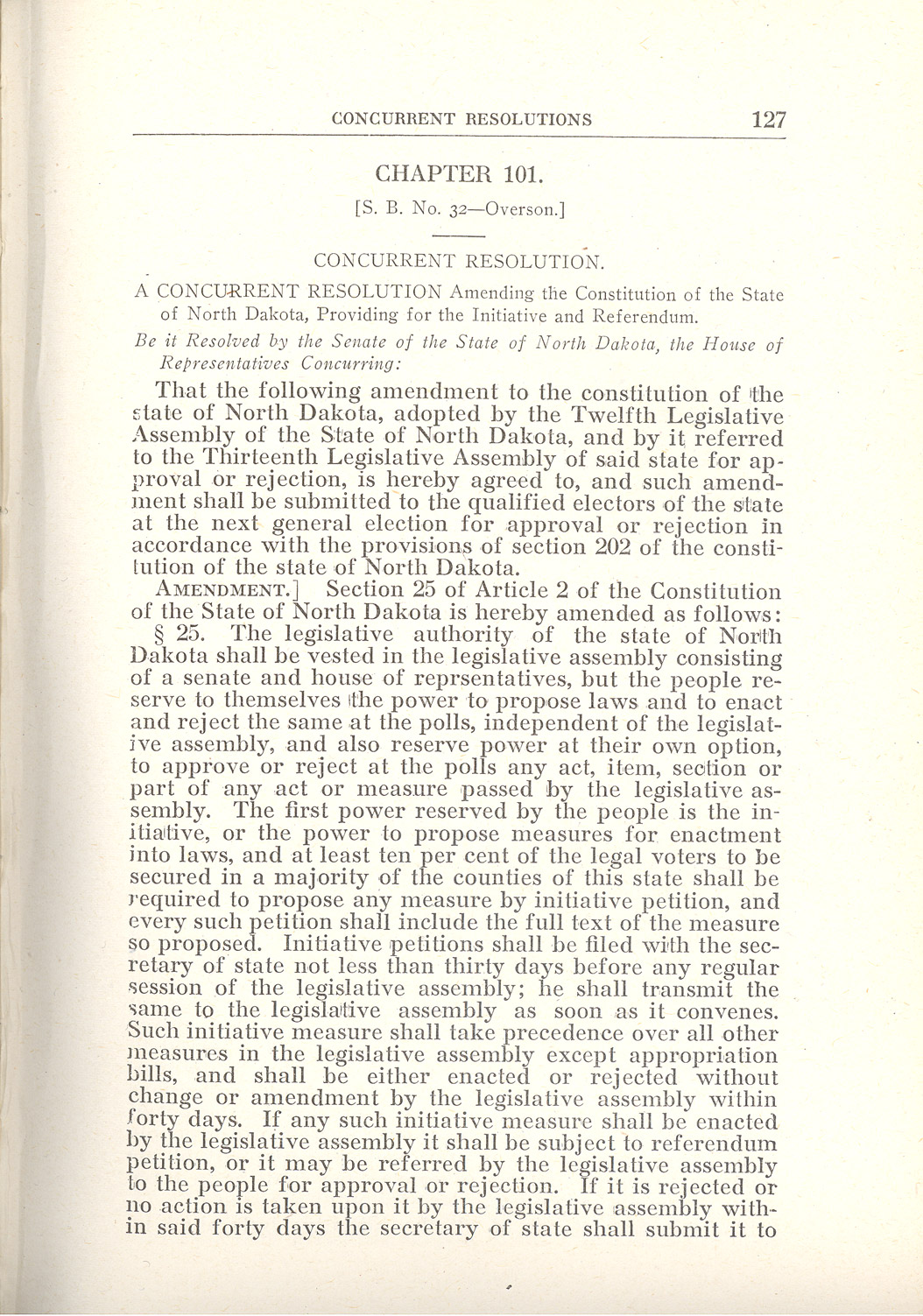 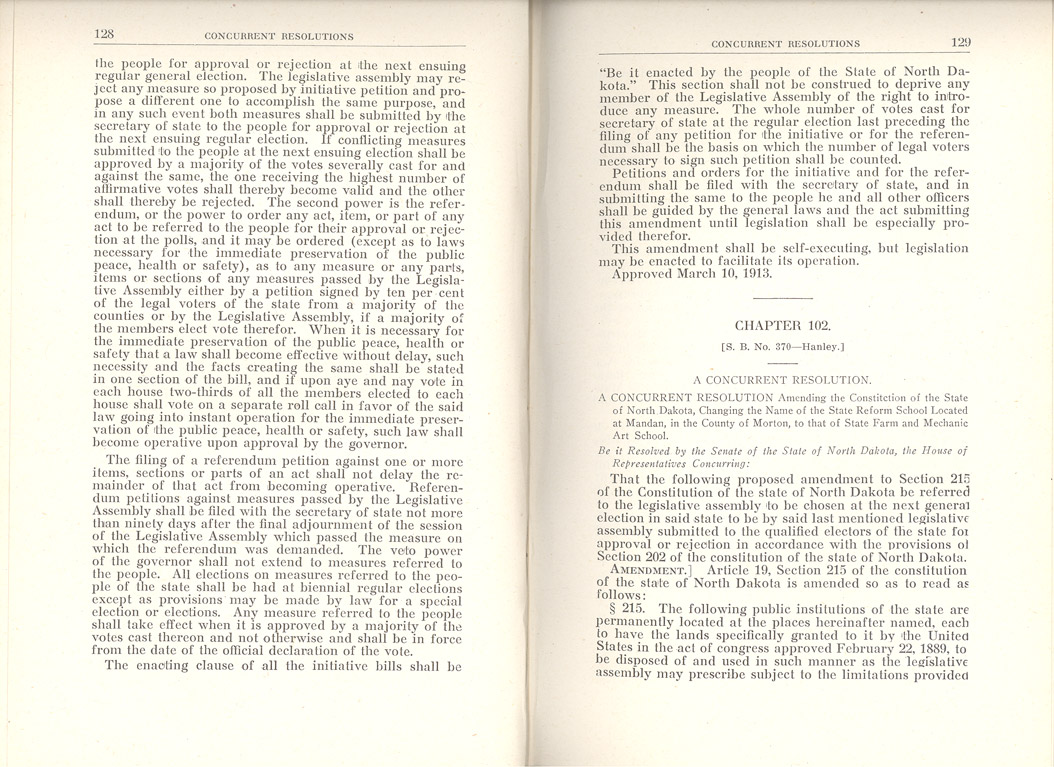 Opponents of the bill said that initiative and referendum were socialistic and populist. The prohibitionists still opposed the bill which they thought threatened North Dakota’s “dry” status. As the bill was written, it included the possibility of initiating constitutional amendments. Opponents believed that this portion of the bill diminished the responsibility of the legislature to carefully consider all amendments to the state constitution. The debate over the bill created “strange bedfellows” as some insurgent Republicans allied with McKenzie’s stalwart Republicans and prohibitionists to defeat the bill.

Both the Senate and the House passed the bill in 1907. North Dakota law required that a constitutional amendment be presented and passed a second time in the next legislative session (1909) before it went to the people for a vote.

Ueland began a campaign for support of the bill. However, after a contentious debate, the 1909 legislature did not pass the bill a second time as required. 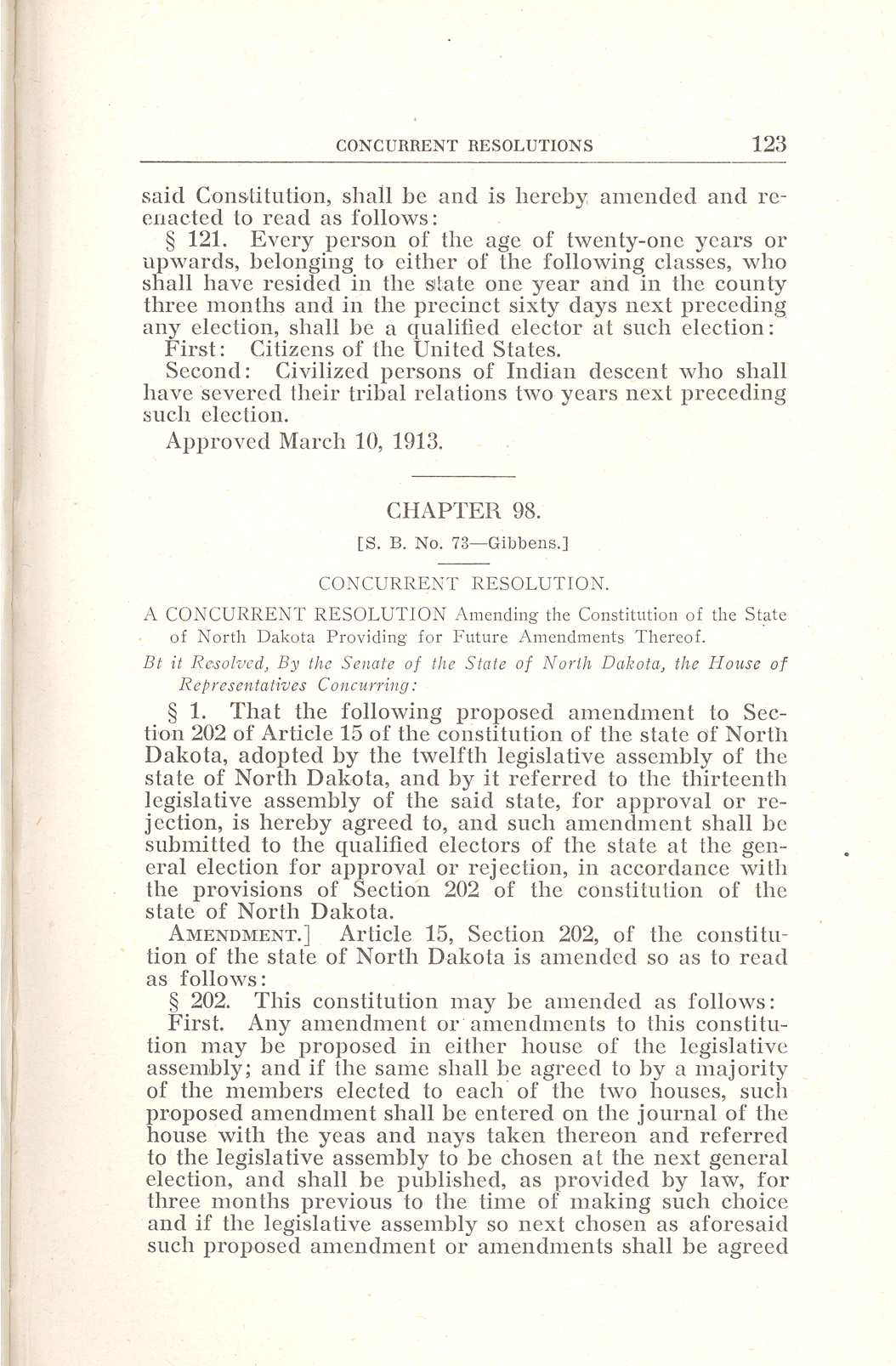 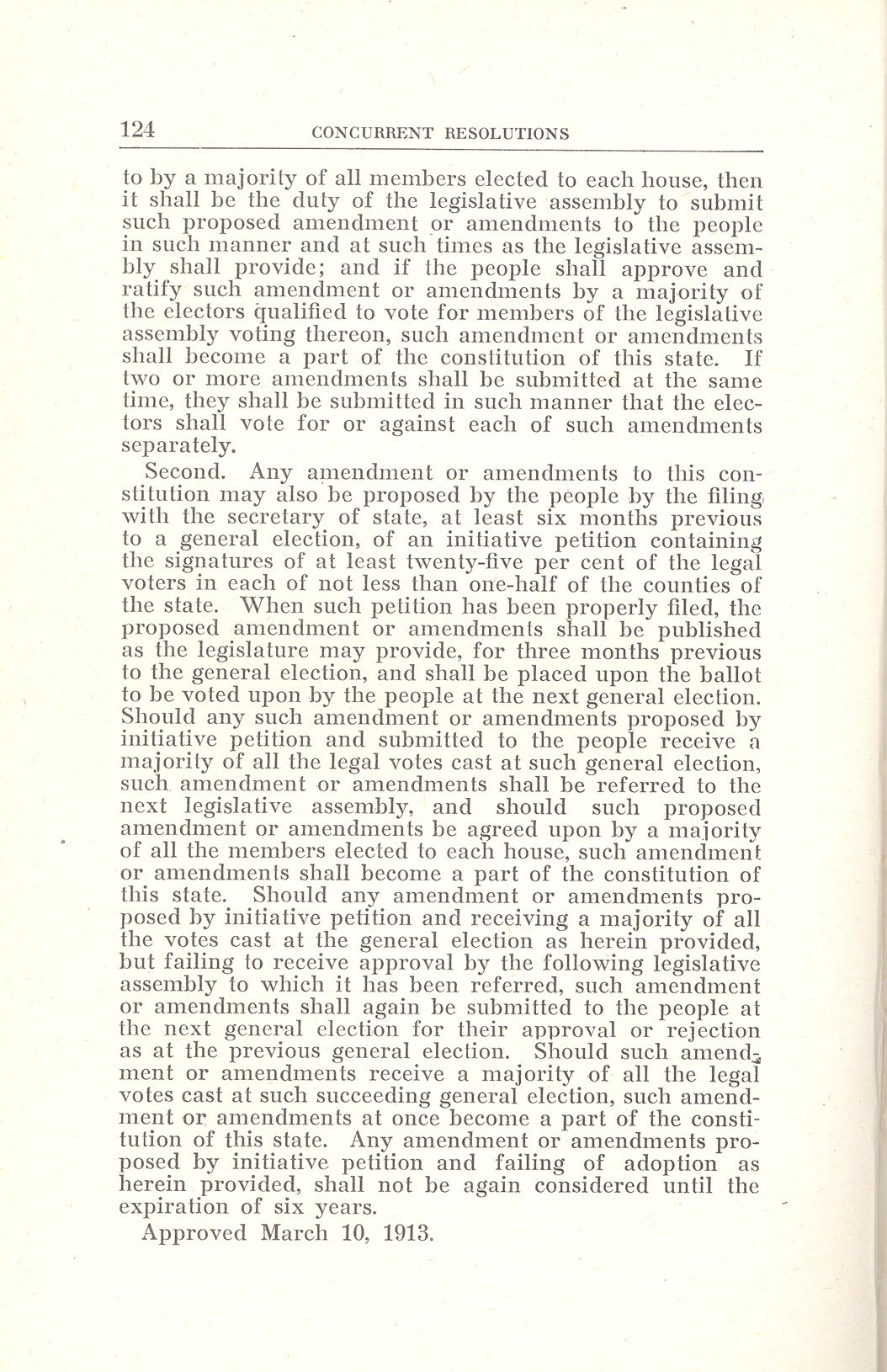 In 1911, Governor Burke made initiative and referendum a legislative priority. The legislature passed four bills in which the details about the initiative and referendum differed. The 1913 legislature passed two of these bills. One bill (S. B. 32) concerned initiating a law or statute; (See Document 2) the other bill (S.B. 73) concerned initiating a constitutional amendment. (See Document 3) S.B. 32 also legalized the process of referral by which voters could petition to bring a law passed by the legislature to a vote of the people. Both of these bills would become constitutional amendments if approved by voters. Voters approved both laws in 1914.

In the 1916 election, two legislative laws were referred to the people by petition. Both were upheld by the voters. In 1918, voters petitioned to have seven constitutional amendments on the ballot. All seven were approved by voters. Voters petitioned to bring seven laws to the ballot in 1919. Again, all were upheld. North Dakota voters vigorously embraced their new democracy.

Why is this important? It took 20 years for the bill Lars Ueland introduced in 1893 to become part of North Dakota’s constitution. With the growing power of the progressive movement, the legislature had to respond to the growing desire of the people to have more control over the legislative process and the state constitution. Over the years, the details concerning the initiative and referendum have changed. Nevertheless, North Dakota today ranks among the top five states in the use of initiative and referendum.