The Farmers’ Alliance began in the 1870s. By 1886, it was a national movement with three parts. There was the Southern Alliance, the Farmers’ Alliance, and the Colored Farmers’ Alliance (African American farmers had a separate organization because of segregation). The national organizations called for an end to corporate monopolies, excessively large landholdings, government ownership of railroads and telegraph lines, the free and unlimited coinage of silver, and a plan to allow farmers to use their crops as collateral for federal loans.

North Dakota farmers formed a chapter of the Farmers’ Alliance sometime in the mid-1880s. Most of the issues of the North Dakota Farmers’ Alliance were the same as those of the national organization. Most North Dakota farmers agreed that the railroads needed to be regulated. Railroad shipping charges for North Dakota farmers were higher than shipping charges for farmers in Minnesota. Some farmers paid more to ship their grain to Duluth, Minnesota than the grain companies paid to ship the same amount of grain to London, England. Farmers also disliked the railroads’ habit of giving free passes to some passengers. Most of these passengers were engaged in political action that favored the grain dealers and railroads and harmed the farmers.

For farmers, money matters were very important. Farmers received income once a year, and their income depended on good weather and good markets-two things they had no control over. To maximize their unreliable income, farmers wanted to reduce the cost of goods they had to buy.

By 1896, the Populist Party had begun to fade in importance. The last Fusionist served in the Senate in 1903. Progressive Republicans had absorbed many of the progressive issues that the Farmers’ Alliance shared with urban progressives. Some issues that farmers found to be important were not addressed by either the Democrats or the Republicans.

Why is this important? The Farmers’ Alliance changed the nature of politics in the United States. Third parties typically do not do well in the two-party system, but if they are strong enough, either the Republicans or the Democrats will take up the cause. While the Farmers’ Alliance demonstrated some strength in 1893, it could not sustain its political position. The Alliance then joined with the Democratic Party and for a short time enjoyed a small surge of power in the state legislature.

Party Members in the North Dakota House and Senate

*The Populist Party was the name of the political organization of the Farmers’ Alliance. 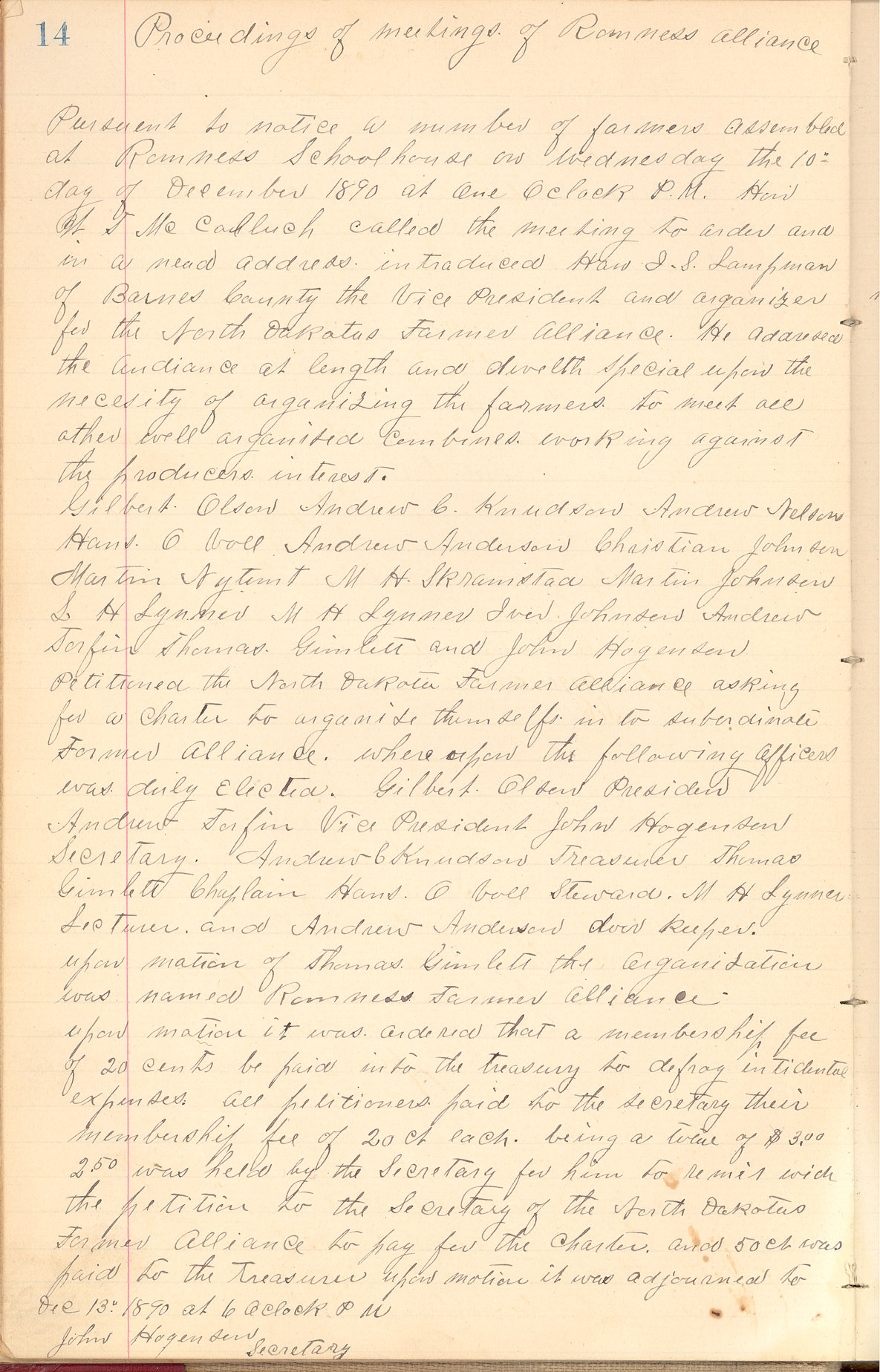 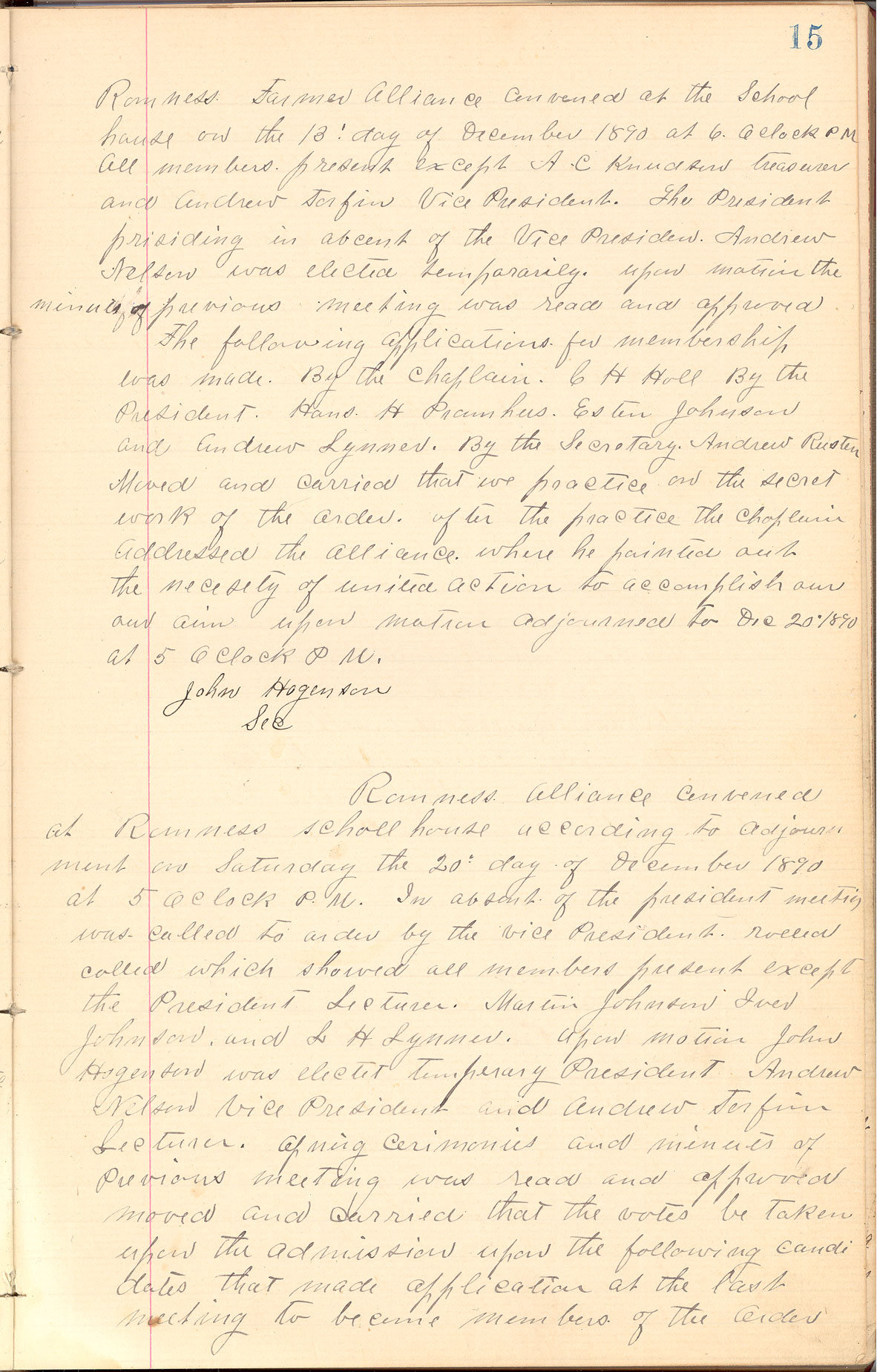 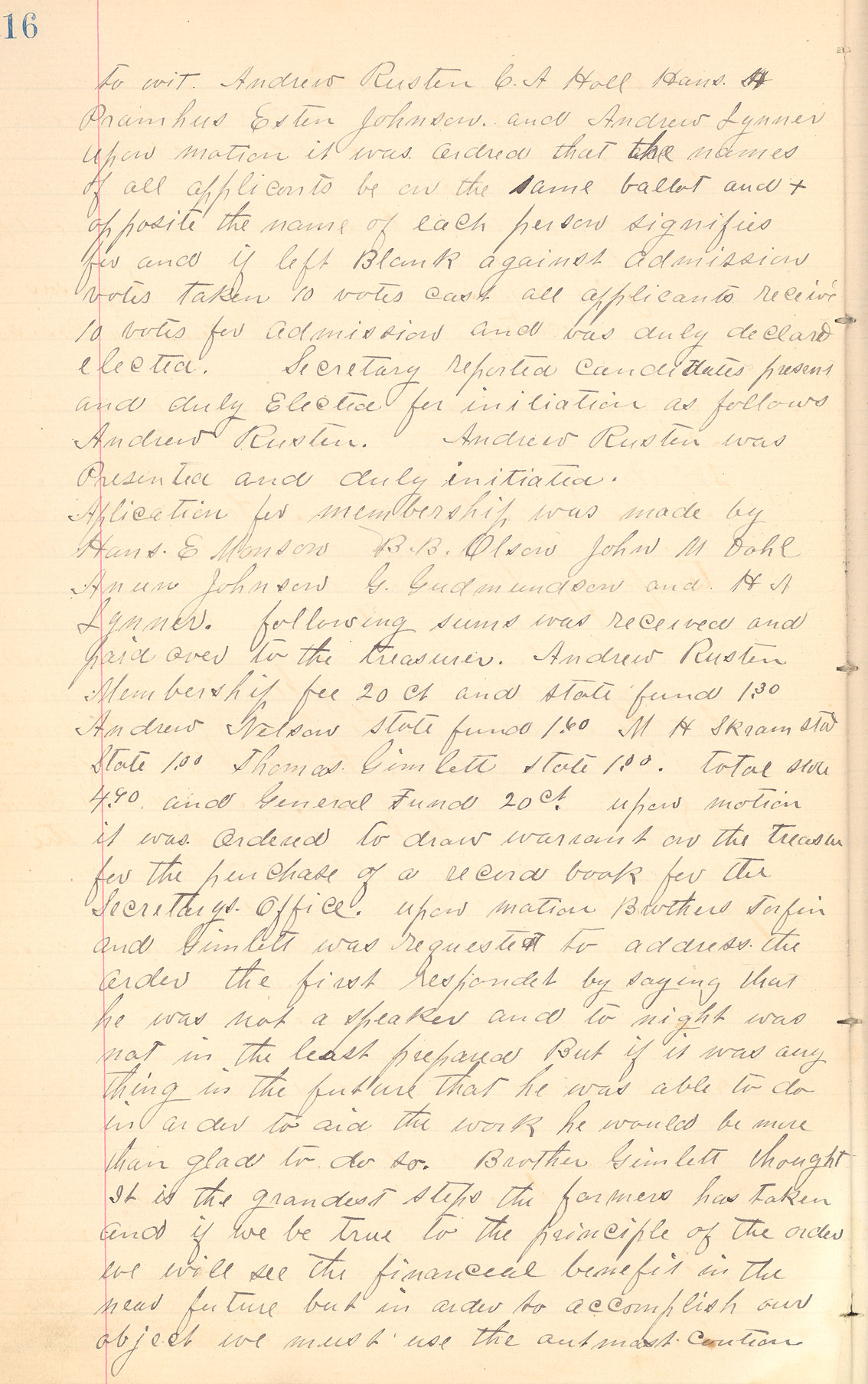 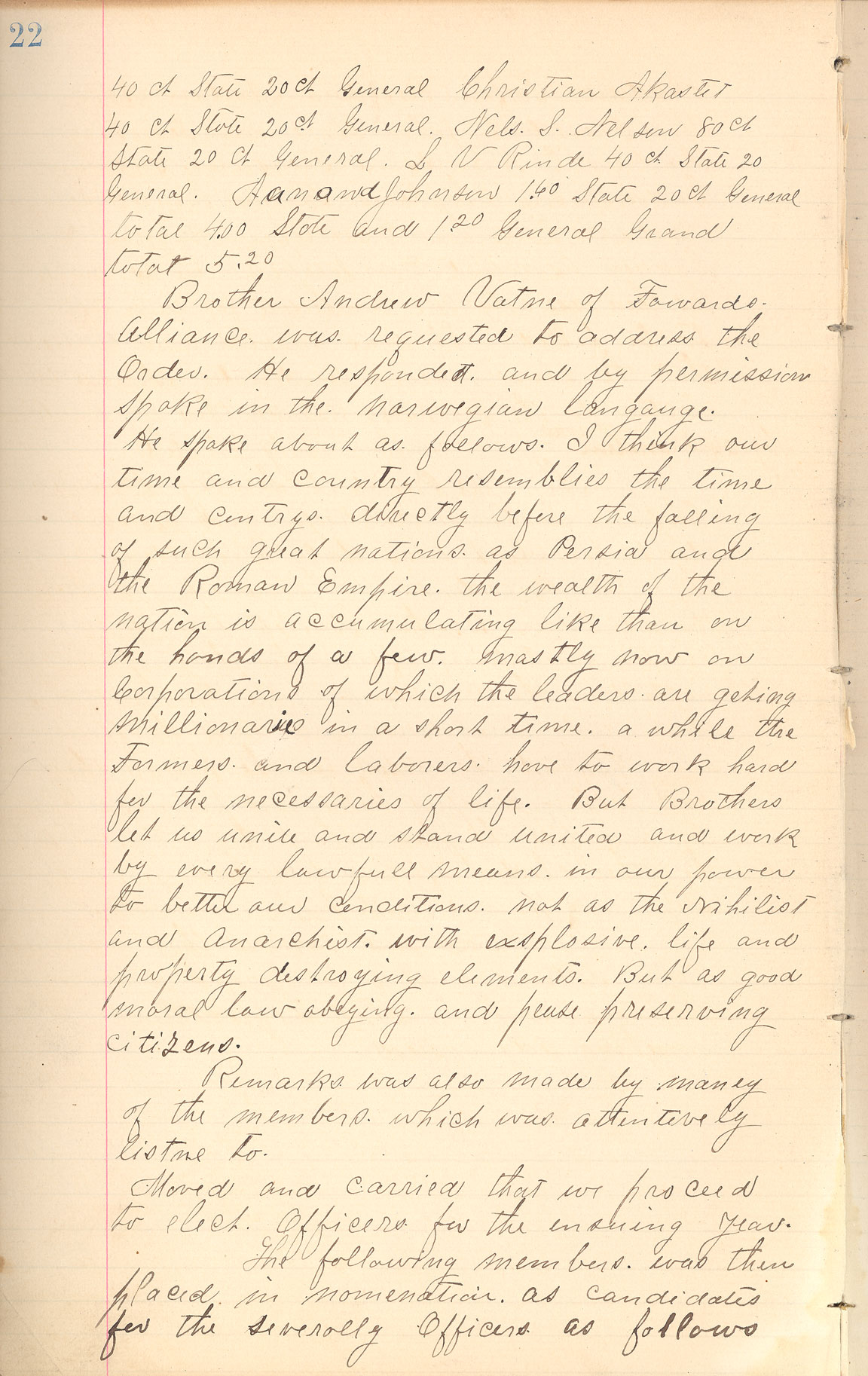 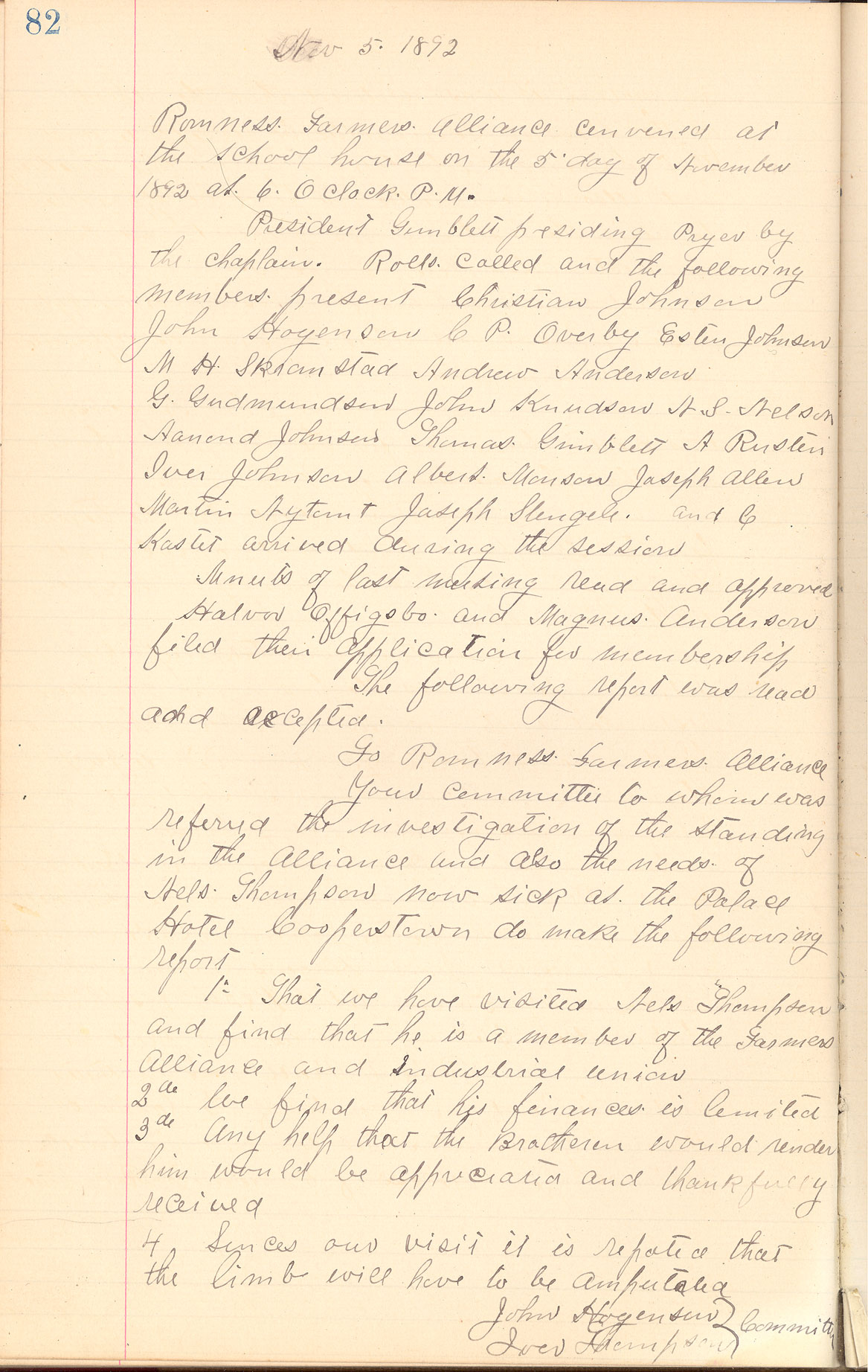 At the first meeting, a representative of the Barnes County Farmers’ Alliance helped the group organize. He gave a short speech that was recorded in the minutes of the Romness Alliance. (All quotations have been edited for spelling and punctuation.)

Honorable I. S. Lampman of Barnes County, the VP and organizer of the North Dakotas Farmer Alliance. He addressed the audience at length and dwelt special upon the necessity of organizing the farmers to meet all other well organized combines working against the producers’ interest. (December 10, 1890)

The Romness Farmers’ Alliance wanted to grow in membership. However, the membership never grew beyond 51 members in the early 1890s when the Alliance was at its greatest strength. Each member had to be “investigated” and recommended for membership by an investigating committee. Members of the Alliance believed that with more members the organization would be able to start a cooperative store in Cooperstown and defeat the corporations that made profits from the farmers’ labor.

On December 20, 1890, shortly after their first organizational meeting, Thomas Gimlett who had been elected chaplain was asked to give a short speech. The minutes reported:
Brother Gimlett thought it is the grandest steps the farmers has taken and if we be true to the principle of the order we will see the financial benefit in the near future, but in order to accomplish our object we must use the utmost caution in admitting members and keep our doings secret in accordance with our obligation.

At each meeting, the members discussed the “politicle question of the day,” the store, and the needs of various members. When Nels Thompson became ill, a committee was formed to visit him and raise money for his medical bills. They found out that Thompson was to have his leg amputated. The Romness Alliance raised $20 to help with his bills. (Minutes, November 5, 1892)

The 1890s were a time of severe drought and many farmers were in need. In case of severe hardship, a farmer was given grain by other members. Each amount given was recorded and the farmer in need was expected to re-pay the others when his crop came in.

It appears from the membership lists that all Romness Alliance members were Norwegian immigrants. The minutes, however, were written in English. When Andrew Vatne of Forwards Alliance came to Romness as a visiting speaker, he asked for and was granted permission to speak in the Norwegian language. The minutes recorded his speech in English.

I think our time and country resemble the time and countries directly before the falling of such great nations as Persia and the Roman Empire. The wealth of the nation is accumulating, like then, in the hands of a few - mostly now on corporations of which the leaders are [becoming] millionaires in a short time. [Mean]while the farmers and laborers have to work hard for the necessaries of life. But, Brothers, let us unite and stand united and work by every lawful means in our power to better our conditions. Not as the nihilist and anarchist with explosives, life and property destroying elements. But as good moral law obeying and peace preserving citizens. (Minutes, January 24, 1891)

The last set of minutes in the Romness Alliance minutes book were dated July 21, 1894. It is difficult to know whether the Romness Alliance continued after that date, but by 1894, many Farmers’ Alliance chapters around the United States were closing. At the last meeting, still struggling for some cooperative buying power, the members discussed the cooperative purchase of baling twine.