Alexander McKenzie was just 11 years old when he left his parents’ home in Ontario, Canada. Or, he might have been 16 years old. He was born on April 3, 1850, or perhaps on April 14, 1851. He might have come to Dakota Territory in 1868 with a freight team. Or, maybe he didn’t. Alexander McKenzie is one of the most fascinating men in early North Dakota history. He was a master of deception, a keen observer of political processes, and devoted to developing businesses in North Dakota. He was a loving father, but he also deceived his families.

While the facts about McKenzie’s early life are fuzzy, we do know that he made his way to Minnesota where he briefly worked as a jailer in Brainerd, and then went to work for the Northern Pacific Railroad (NPRR). He laid track for the expanding railroad and became a crew chief. When the NPRR declared bankruptcy, the tracks and Alex had reached the tiny, brand-new village of Bismarck.

In Bismarck and out of a job, McKenzie sold soft drinks around the city. Though he was unable to read or write, McKenzie was appointed Burleigh County sheriff in 1874. McKenzie was six feet tall and weighed 220 pounds. He was physically imposing and not afraid to use his size to help maintain order in the lawless city of Bismarck. McKenzie was elected sheriff six times. During these years, a friend taught him to read and write, but he never trusted his ideas to paper. He wrote letters to his distant family, but most of his political business was conducted face-to-face.

In the 1880s, McKenzie began to invest in businesses. He had a real estate business through which he bought and sold land. He started a cattle ranch and was a partner in a Canadian construction company. He owned and operated the waterworks in the city of Bismarck. In 1899, he was in Alaska, where he bought gold mines. 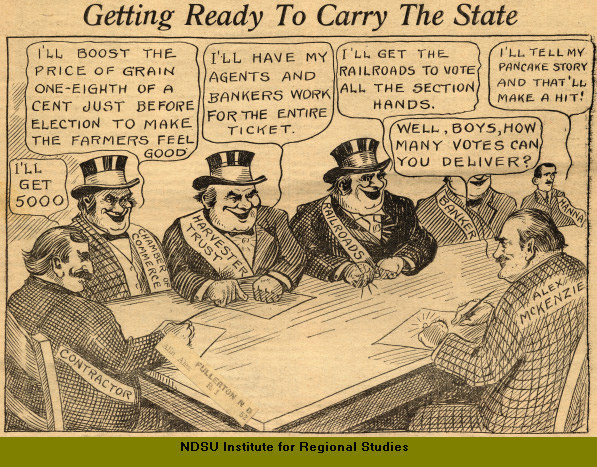 Document 1: This political cartoon demonstrates the way many North Dakota voters viewed Alex McKenzie. He was in control of North Dakota’s government on behalf of major corporations such as the railroads. Even though this cartoon was drawn in 1915, many years after McKenzie’s power was blunted by a 'revolution' in North Dakota politics, he was still a very powerful political leader. John Baer cartoon, Nonpartisan Leader September 30, 1915.

Document 2: When Alexander McKenzie died (in St. Paul, Minnesota), many citizens of North Dakota asked to have his remains returned to Bismarck for burial. He was buried with honors. This obituary acknowledges that many people had mixed feelings about “Big Alex.” He had accomplished many good things for the state of North Dakota, but his methods were undemocratic and sometimes illegal. Bismarck Tribune, July 1, 1922. 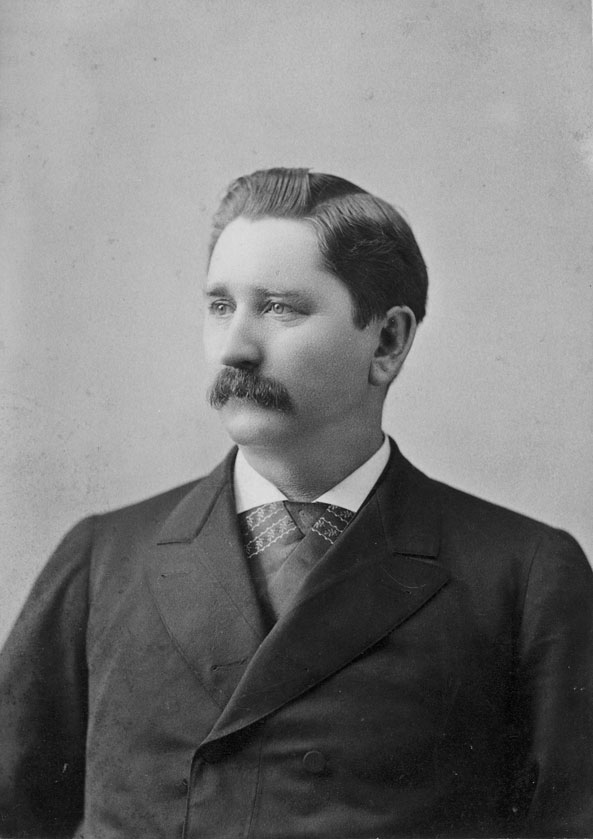 Document 1: Alexander McKenzie was the son of poor Scottish immigrants. McKenzie’s height and strength inspired awe among both his allies and his enemies. SHSND A2279.

In 1882, McKenzie changed his political party membership from Democrat to Republican. The Republican Party had a firm grip on Dakota politics. McKenzie was smart enough to find his way to the center of political power. With his political interests grounded in Bismarck and the Republican Party, McKenzie brought the territorial capital to Bismarck in 1883. It was a stunning maneuver that helped secure his political leadership position. After the capital removal, McKenzie was known as the “political boss” of North Dakota. He selected the men the party nominated for public office including governor, congressional representative, senator, and state legislator. He usually, but not always, got what he wanted. (See Image 1)

McKenzie had no personal political ambitions. He did not want to hold elective office. However, he wanted to build a political structure in North Dakota that was good for business. North Dakota was an agricultural state. McKenzie, however, had little regard for farmers. He worked for the Northern Pacific Railroad, the Great Northern Railroad, the grain elevators and mills in St. Paul, and other out-of-state businesses that profited from North Dakota agriculture. He made sure that North Dakota laws favored big corporations. (See Document 1)

Though McKenzie was very successful with his political “machine,” he met some serious setbacks. In 1901, McKenzie was jailed after being convicted of fraud in the Anvil Creek, Alaska gold mines. He arranged for one of his cronies to become a federal judge in Alaska and to rule favorably on his claims against other miners. McKenzie’s friends in Minnesota and North Dakota pressured President McKinley, who soon arranged for clemency for McKenzie.McKenzie’s Alaska adventures and legal problems became the foundation for a novel by Rex Beach called The Spoilers. The novel has been made into six movies, including “The Spoilers” starring John Wayne as Alexander McNamara (1942). The novel is available online at http://www.gutenberg.org/ebooks/5076

More problems were on McKenzie’s horizon. In 1906, the Progressive Republicans took control of state politics and reduced McKenzie’s influence in North Dakota.

McKenzie’s power was not forgotten. After he died on June 22, 1922, the people of North Dakota asked to have his body returned to Bismarck for burial. He was given a state funeral in the legislative hall. (See Document 2)

After his death, McKenzie’s children from his first marriage found out that McKenzie had a secret second family living in New York. His second marriage to Elva McKenzie may have taken place before he divorced his first wife, or before her death. The marriage record is unclear. It is certain, however, that McKenzie was inclined toward secrecy and deception, even in his personal life.

Why is this important? Alexander McKenzie was the single most influential person in North Dakota from 1883 to 1922. He had hundreds of friends, many of whom had accepted bribes or political positions from him. He was undoubtedly corrupt in his approach to business and politics.

On the other hand, McKenzie strengthened the national corporations that North Dakota farmers needed in order to get their grains to market and to succeed in farming. McKenzie helped to break down North Dakota’s economic isolation by creating a political environment that was friendly to big business. He was a North Dakota boomer and brought new businesses to the state. Though he often lived in Minnesota or other places, he considered Bismarck his home. For both good and evil purposes, Alexander McKenzie loved North Dakota and used his considerable political skills to strengthen the state.